In the getting-on-for-two-years THC has been in existence Graviteam Tactics: Mius-Front has made brief appearances in A2Zs and other articles, but it’s never had a feature all to itself. As it’s indisputably one of the ten best PC wargames ever made, and is responsible for some of my most indelible wargaming memories, this level of coverage borders on the scandalous, and requires urgent remedial action, hence this piece and its companions. 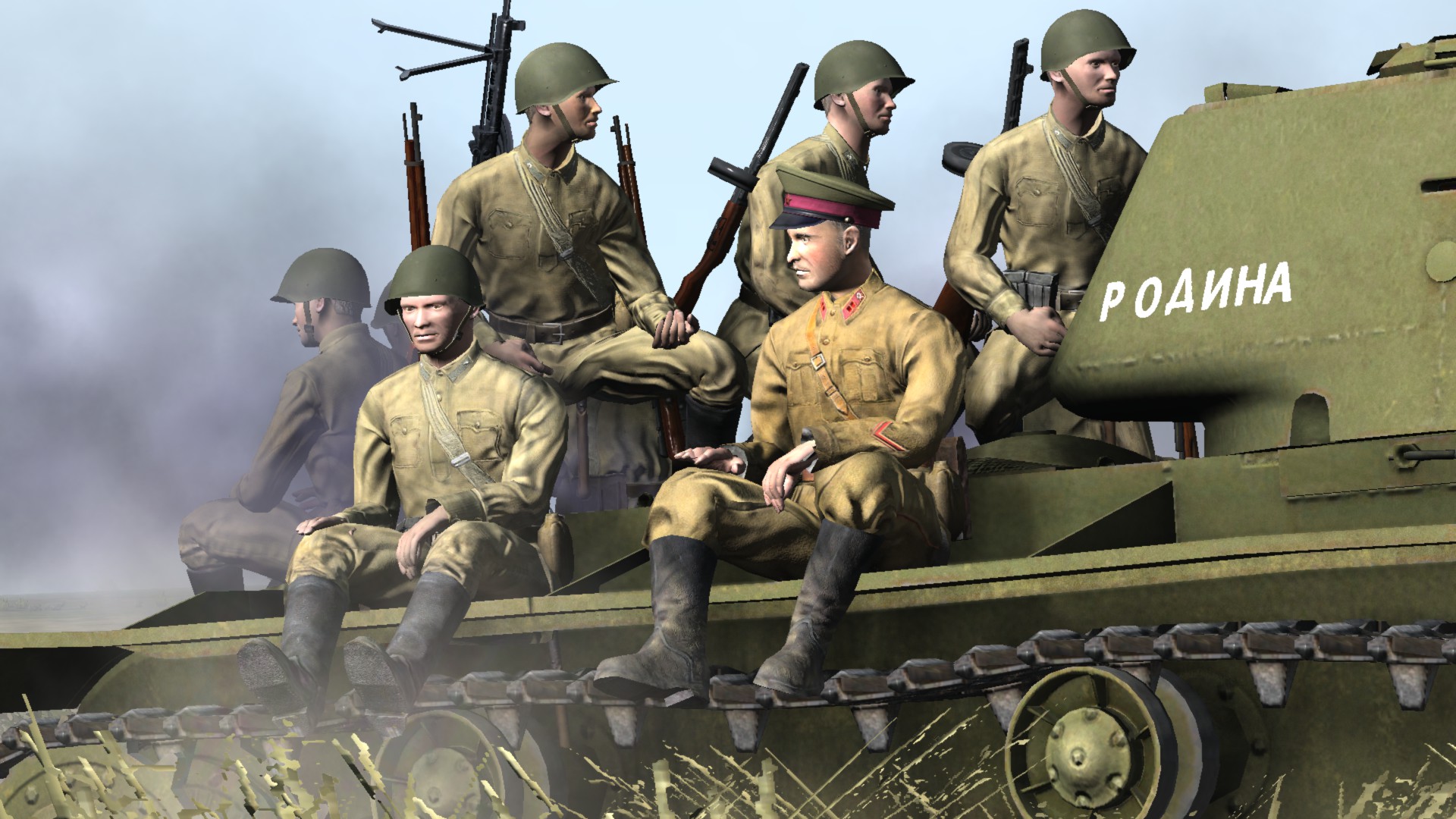 While I spent a considerable amount of time in the company of GTMF in the years immediately following its 2016 launch, lately myriad distractions have led to estrangement. A recent email from an eloquent German enthusiast was the nudge I needed to get back on the warhorse…

“Graviteam’s game itself is a second to none combat sim, continuously updated and developed for over a decade – and running on an engine that is also used for military training software (similar to SB Pro). Having researched operations based on primary sources on top of that makes it unique…

It is my favorite combat sim/wargame by far: the authentic pacing of combat seems to be the result of the hard work to model the relevant processes 1:1 (real distances, velocities, speeds, detailed vehicle damage and dynamic simulation mechanics which constantly create new “emergent” situations, full rigid body physics simulation for pretty much every object on the battlefield, …). They recently included a simulation of volumetric internal organs of soldiers which can be hit by fragments (coming in various form factors along with other parameters) or other projectiles. Shells actually have a volume (contrary to, for example, SB where shells are just points). The detail is almost excessive (shell fuses can fail to trigger for different reasons, while sensitive mortar fuses can be triggered prematurely when used during rain). Even the excellent SB Pro, my second favorite game, looks “sterile” compared to it. I could easily fill a book (at least in my mother tongue, German) with reasons why the Graviteam title is that great and unique, but of course I do not want to spam you with a wall of text… :)” 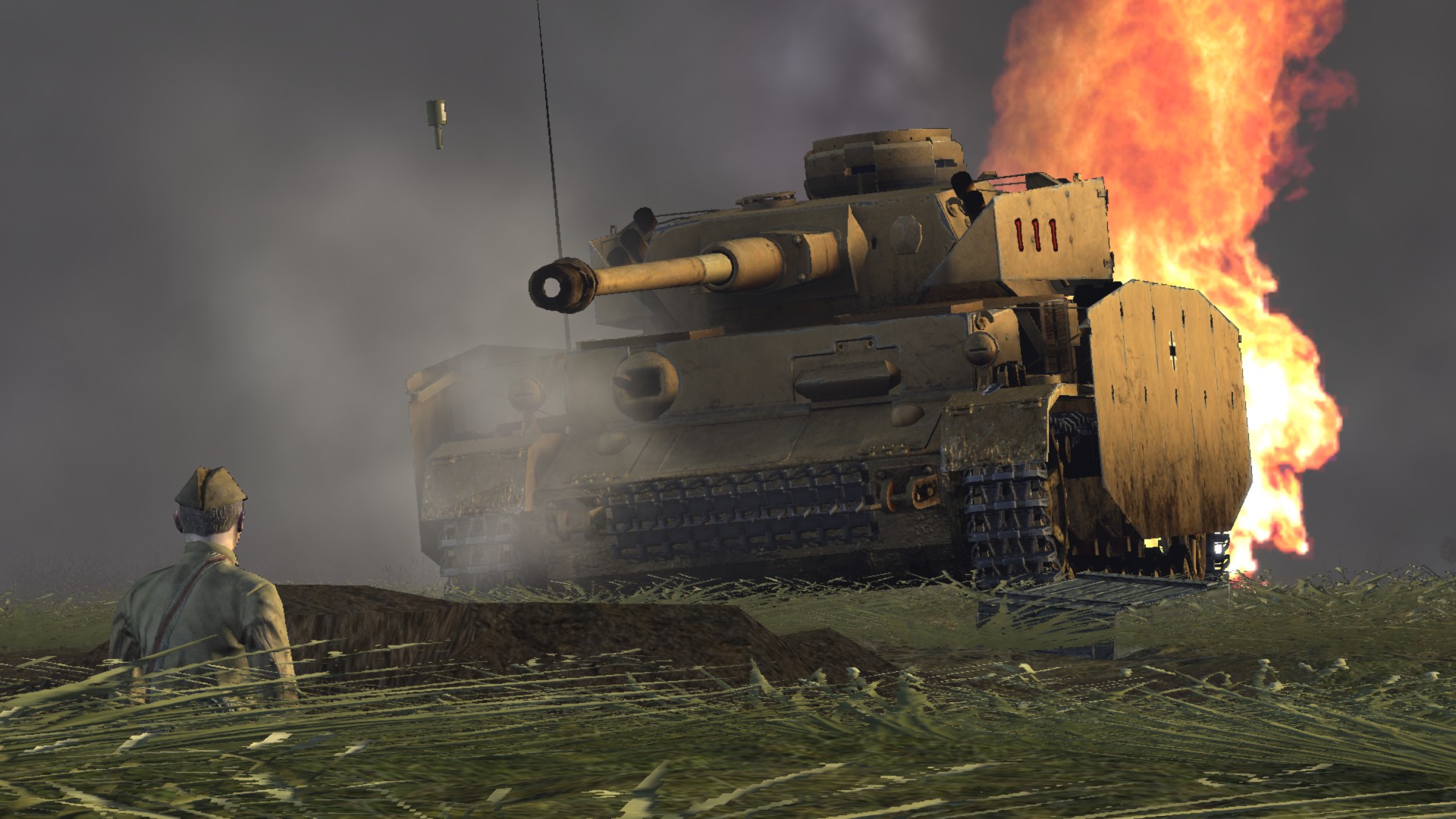 Armed with helpful DLC, mod, and video tutorial advice from my correspondent, I returned earlier this week, intending to spend a day or two reacquainting myself with the notoriously idiosyncratic GUI, and appraising the various improvements. However, things didn’t go quite according to plan.

I’d completely forgotten about the effect GTMF has on my usually-fairly-manageable Capa Syndrome. 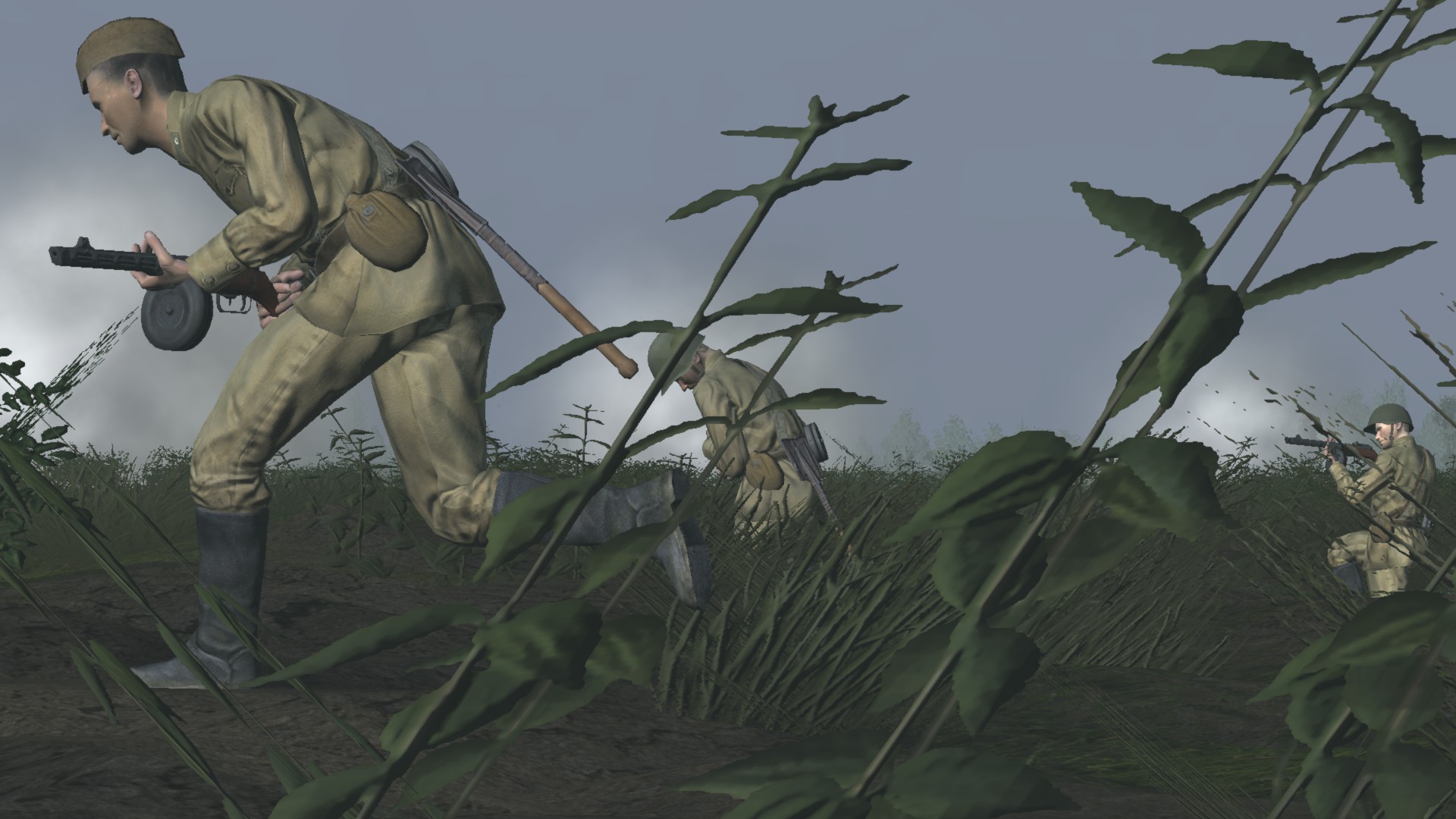 The deep realism and relatively sophisticated visuals in Graviteam’s duplex* delight are a decidedly double-edged sword for an avid F12 jabber like myself. Because the game captures the drama and depicts the detail of battle on the WW2 Eastern Front** arguably better than anything in its field, the temptation to press Pause at regular intervals, and go roam the slaughter space in search of tempting targets for a virtual Leica, can be irresistible. 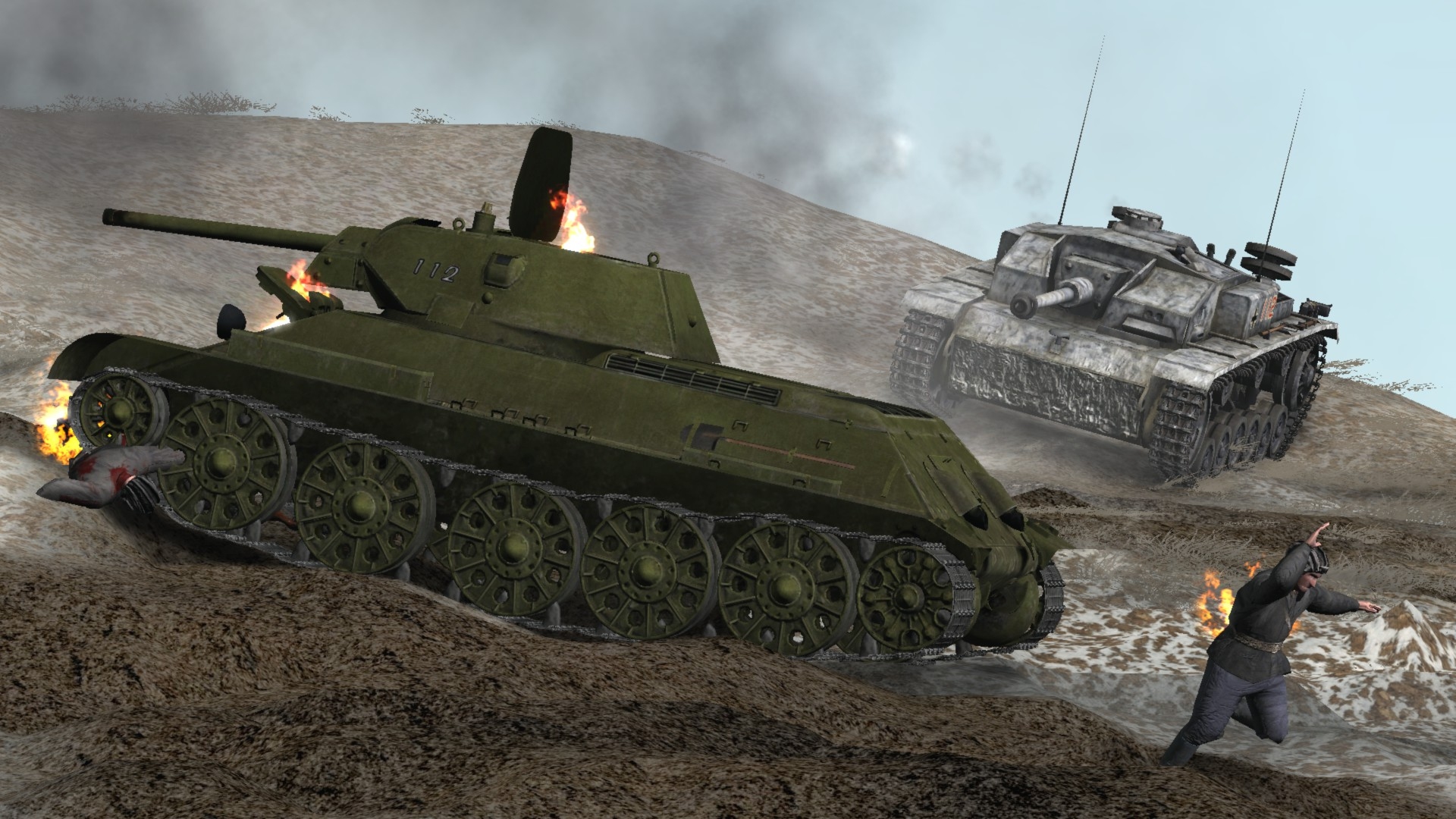 I hate to think how many hours I’ve expended this week, panning, zooming, and tilting, in pursuit of striking, evocative images. I just can’t help myself. I see something out of the corner of my eye – a done-for vehicle disgorging crewmen, a dug-in AT gun about to be overrun, a beleaguered officer fighting for his life with nothing but a Luger and a Geballte Ladung – and suddenly I’m no longer a conscientious commander, I’m a begrimed, fatalistic Robert Capa, striving to capture… 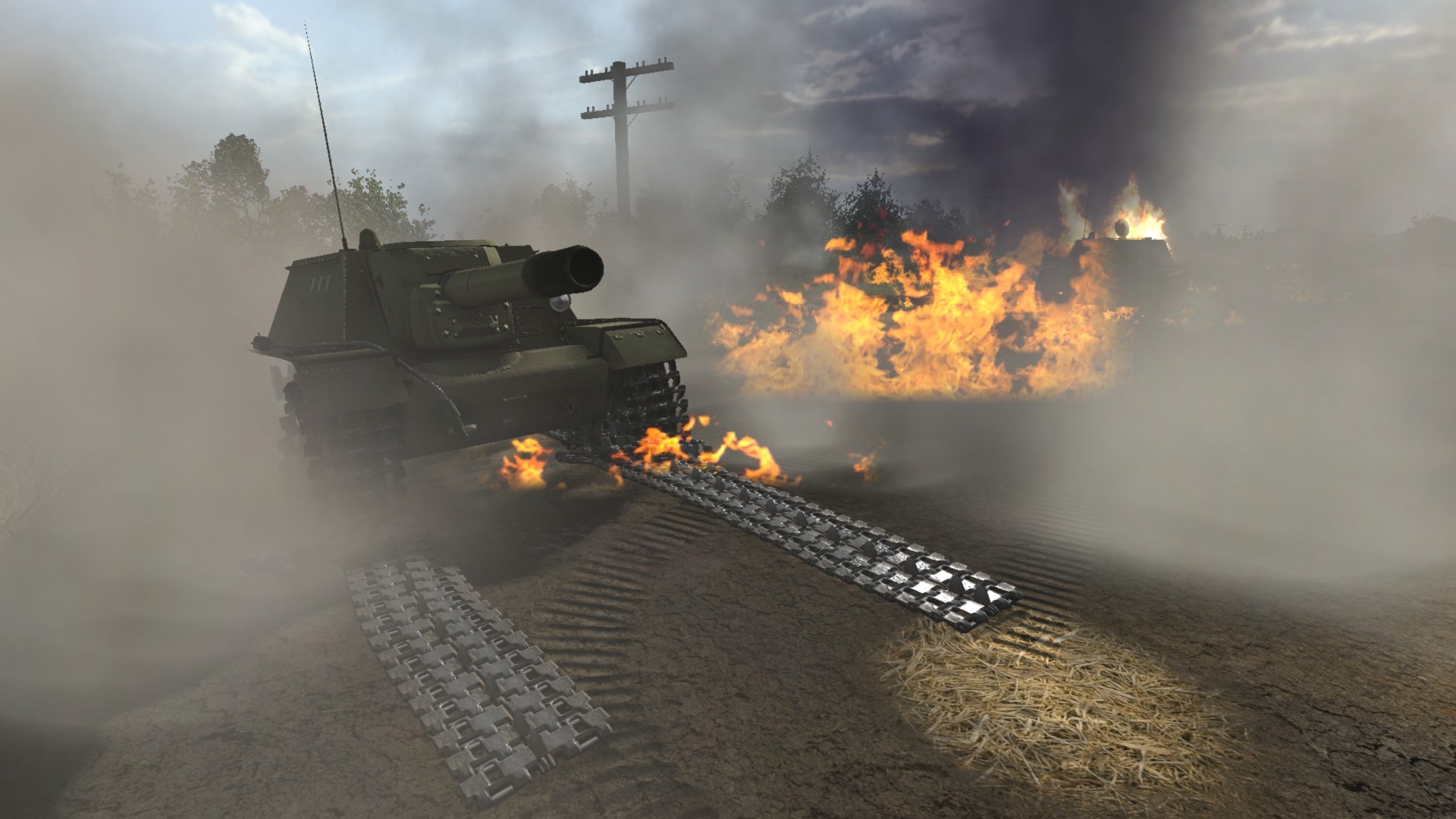 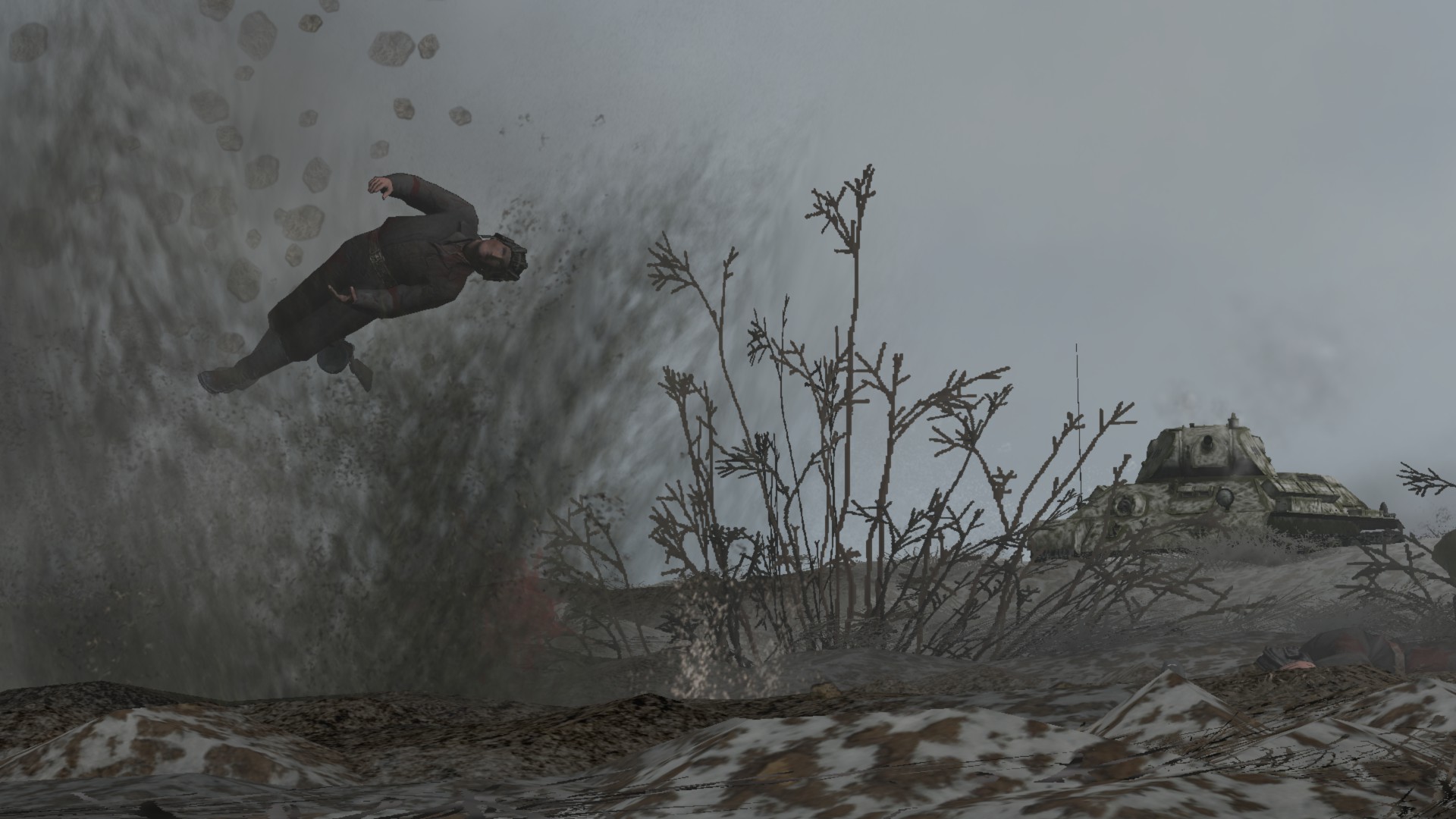 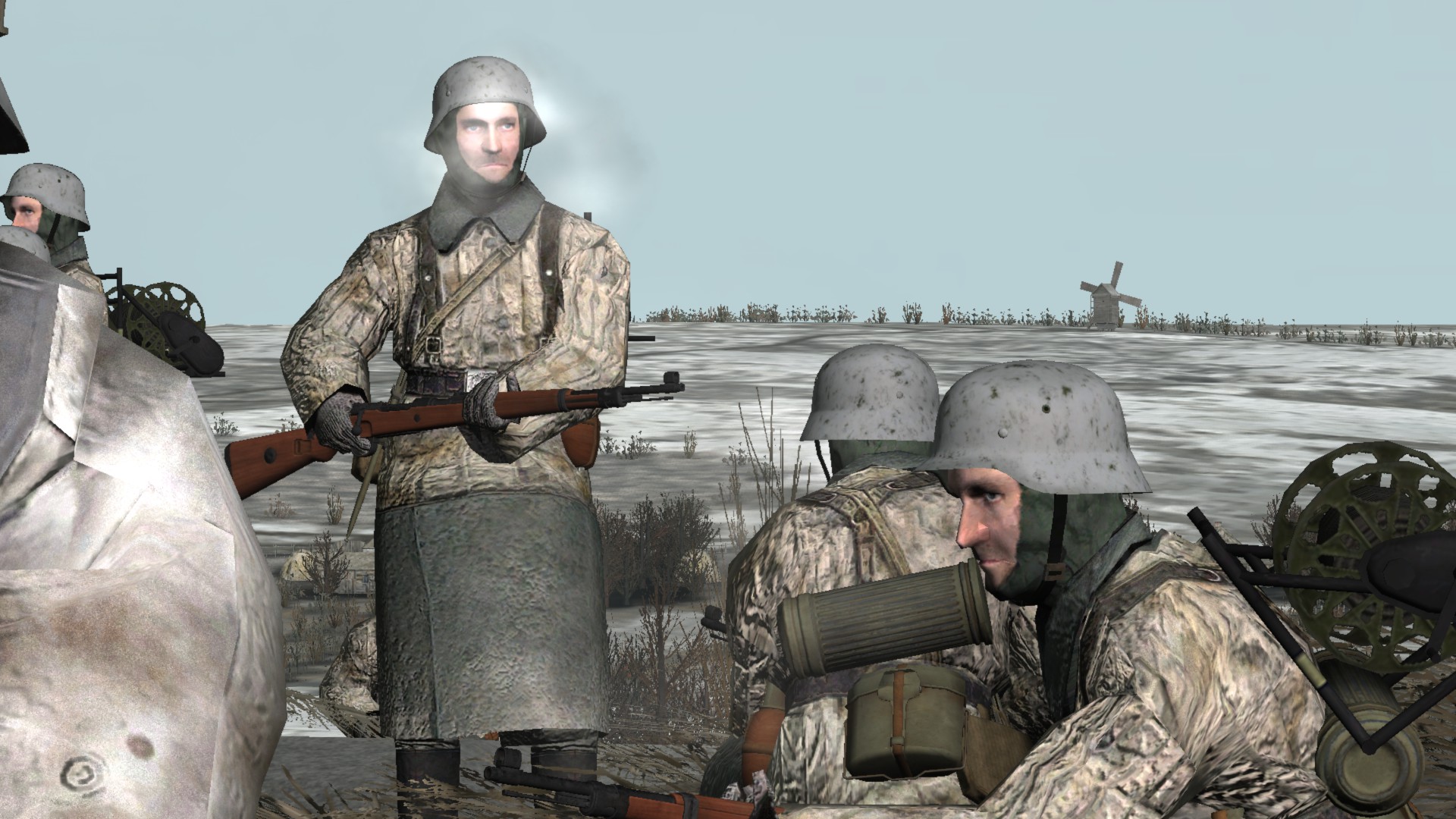 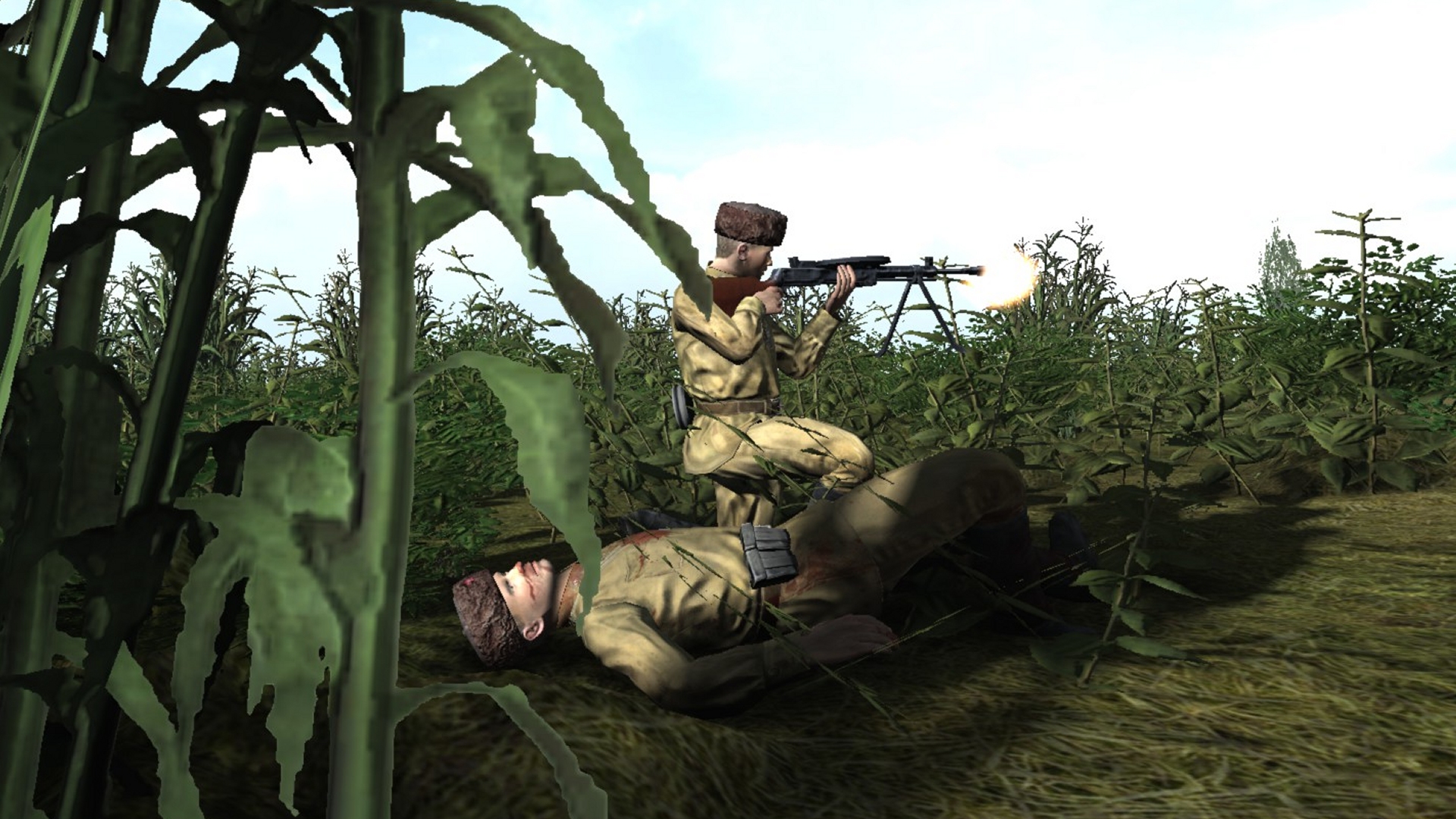 the pity of war… 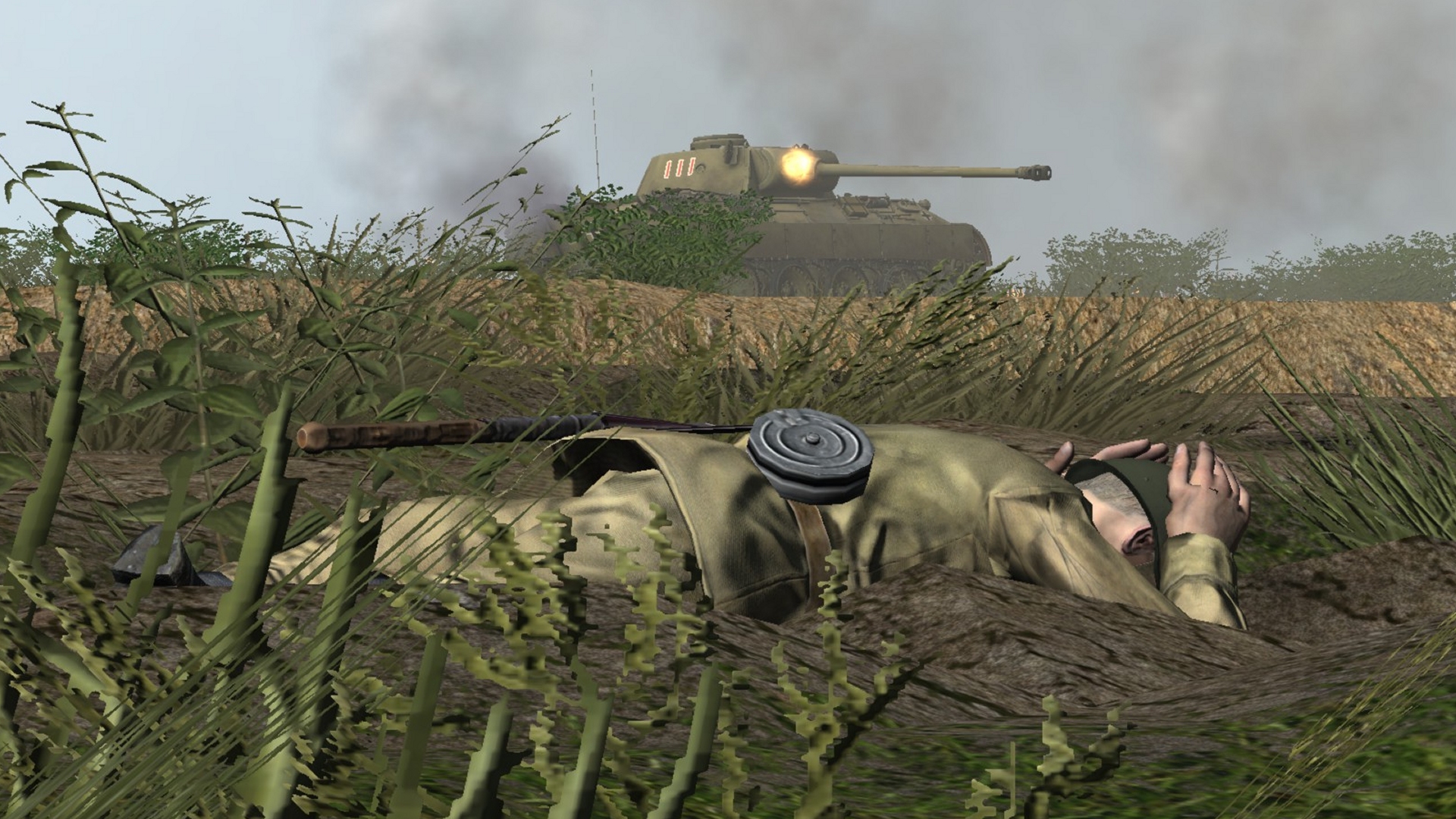 …on a rectangle of pixel-coated photographic paper.

I’d probably be able to keep my mind on the job if Graviteam provided replays, but as there are technical reasons why the game’s spectacles are likely to remain ephemeral for the foreseeable future, I’m left with only two options – 1) Acquire greater self-discipline, or 2) Wait for familiarity to dull my photojournalistic appetites. 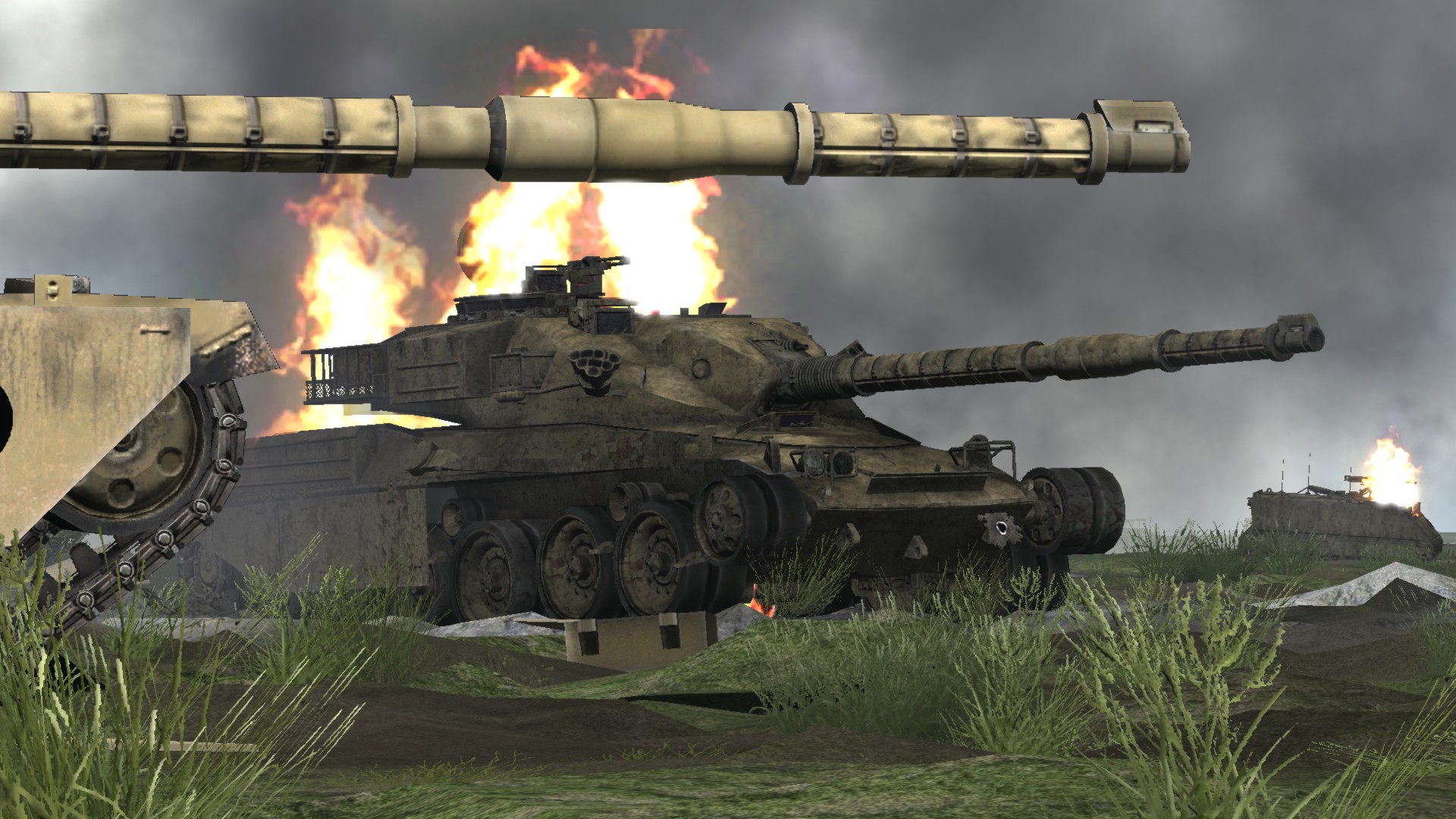 Fortunately for anyone hoping for a smidgen of edification from this article, a bulging screenshots folder isn’t the only thing I’ve gained this week. In between jpeg gathering expeditions, I’ve realised that GTMF’s GUI isn’t nearly as disorientatingly unconventional or gnomic as I remembered it, or as it’s sometimes alleged to be. 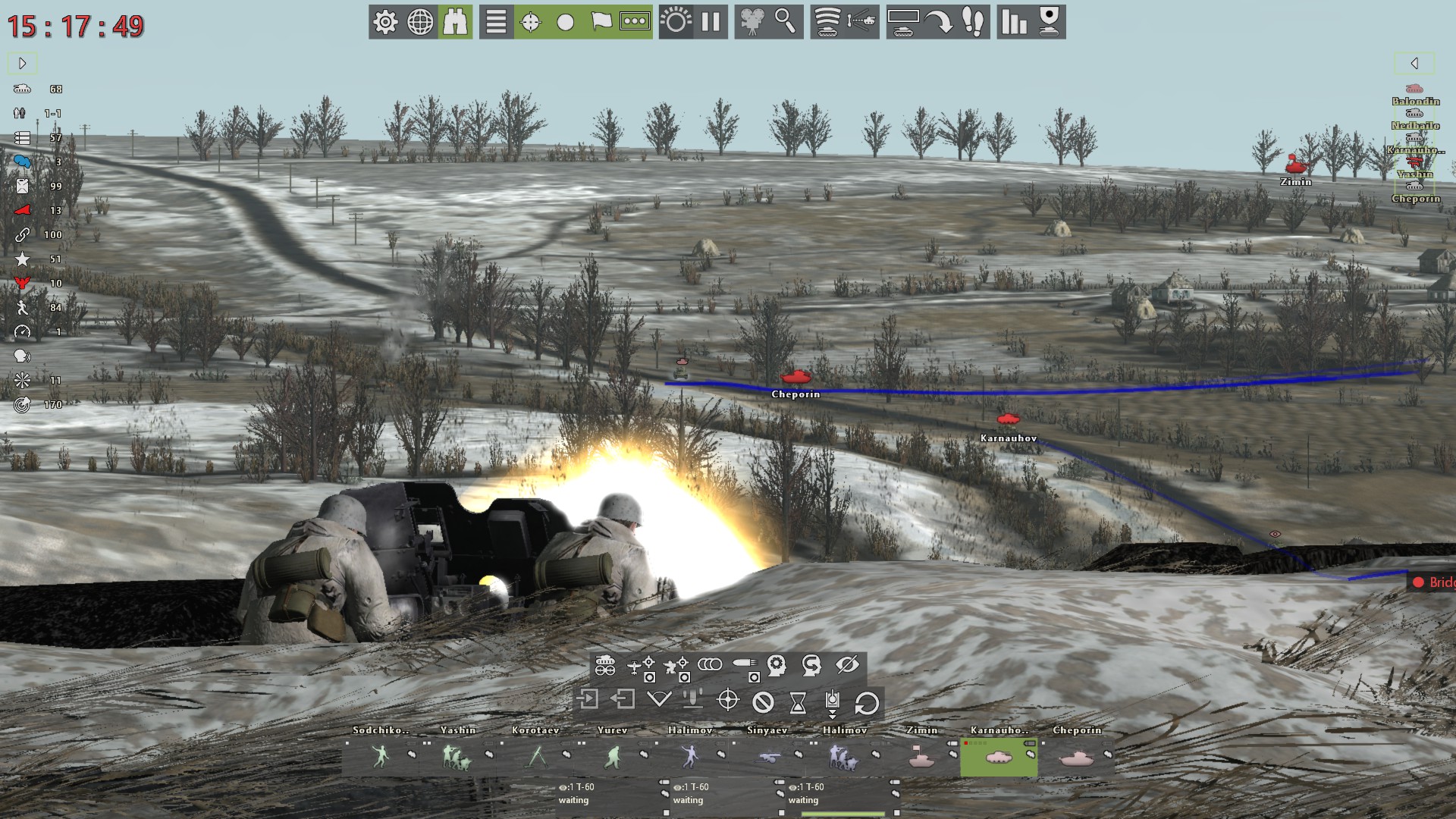 Perhaps there are more tooltips now, perhaps the tutorials have been improved, or maybe I’ve simply stopped wishing Graviteam had used the familiar Atomic/Battlefront approach to order-issuing (colour-coded menus) instead of blazing their own trail (expandable icon-strewn order wheel). Whatever the reason, while aspects of the game such as artillery usage remain somewhat confusing, I was surprised by how quickly and painlessly I found my feet again. 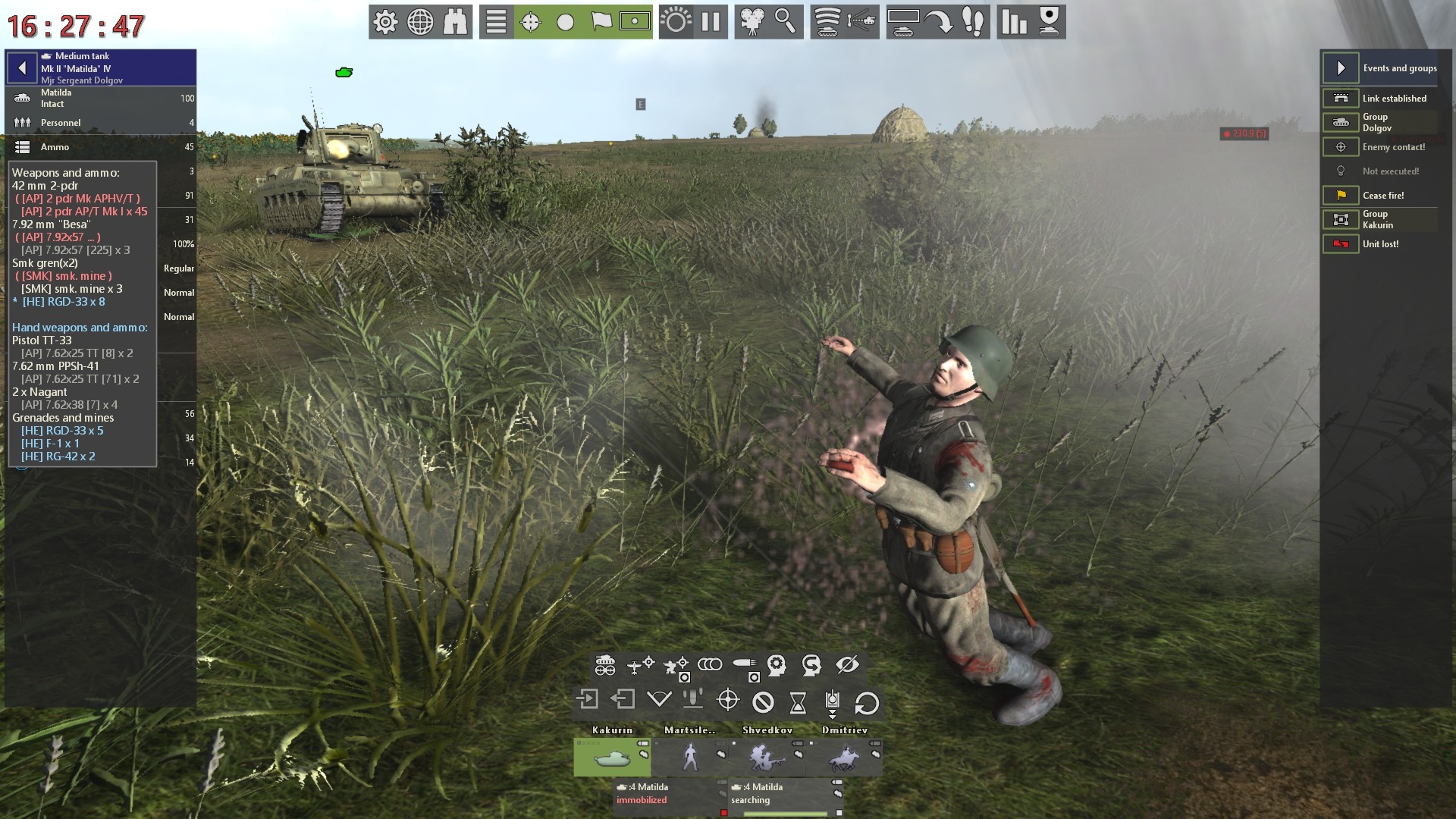 True, returning to the game’s sprawling and often pretty open battlespaces after wargaming for a time in much smaller, denser venues, does take mental adjustment. In Combat Mission grunts have a tendency to cluster which can prove disastrous. Here the issue is often the exact opposite. Hard to discern and differentiate from altitude, the game’s infantry squads often disperse, overlap, and lose shape which can make reading the battlefield difficult. And trying to untangle ‘messy’ lines using micro-management sometimes, thanks to (optional) order rationing, leads to even greater frustration and confusion. To fully enjoy GTMF you must be willing to sit on your hands from time to time, trust your men, and embrace a dash of chaos. 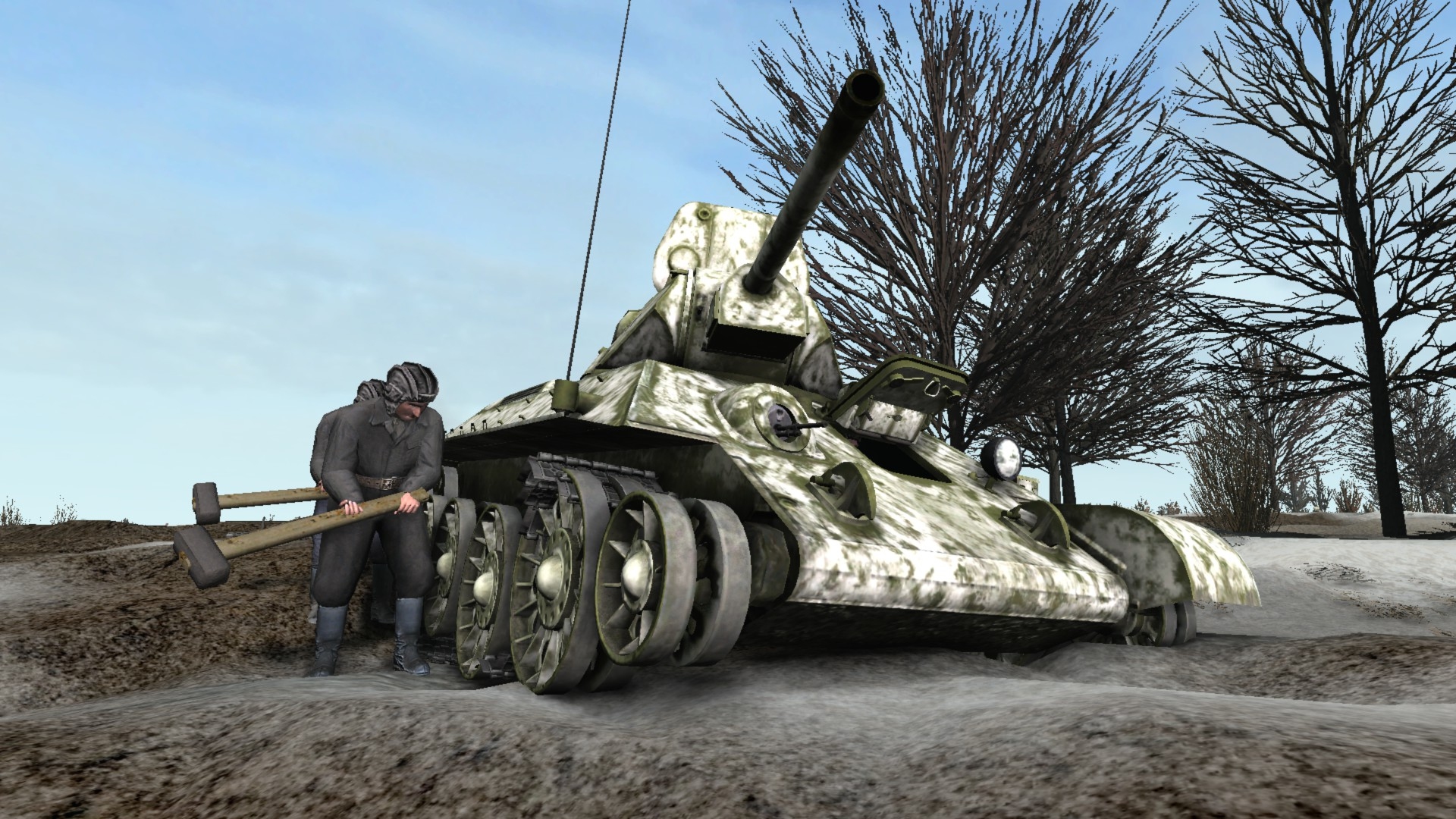 A number of the countless battlefield videos that have emerged from Ukraine during the past 261 days have deepened my respect for Graviteam’s knowledge and coding skills. In my very first scrap this week, I noticed an enemy Opel truck bee-lining towards my lines, and inwardly tutted. It was only when I binoculared the foolish fellow with the Tab key, and saw that the passengers and wheelman were either dead or insensible, that the behaviour made sense. On other occasions I’ve watched tanks with deceased drivers trace tight post-mortem circles or plough-on blindly until stopped by gullies, rivers or inclines. Graviteam have been simming these mechanical danses macabre for years. Recents vids from their invaded homeland show that their hunches (?) were correct. A KOed tank isn’t necessarily a stationary tank. 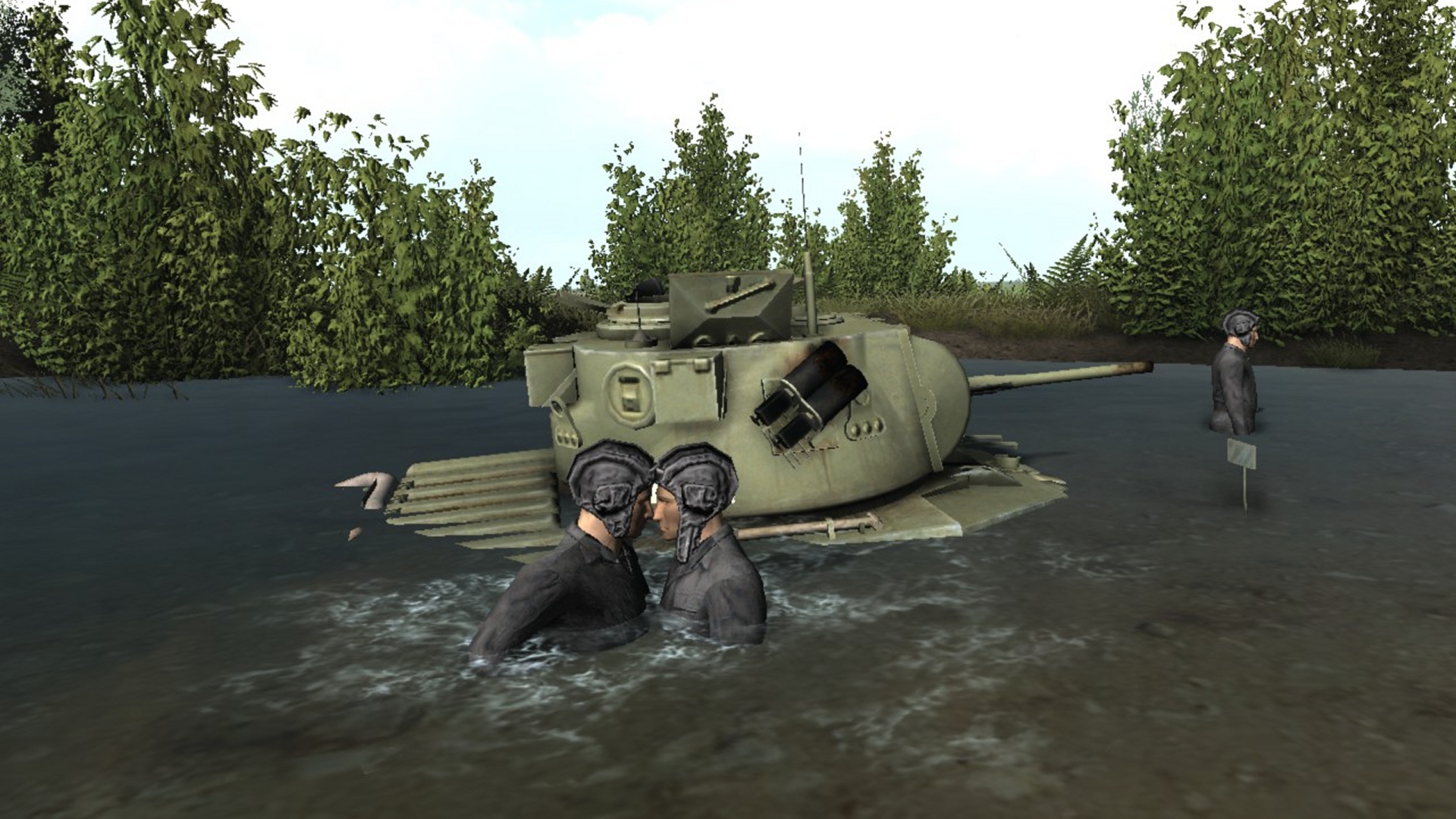 Exposure to footage from UKR has also subtly altered the way I think about AI in tactical wargames. Having seen military vehicles operated by stressed soldiers blunder into ponds, trees and buildings, and trundle over obvious landmines in the real world, I’m more tolerant than I used to be of vehicular weirdness in my war sims. That said, I was hoping to find drivers a little less accident prone than they used to be. Early evidence (I’ll talk more about pathfinding* in future instalments) suggests little has changed in this area in the past few years. You still see AFVs going for inadvisable dips, opting to drive through dachas instead of navigating around them, and showing scant respect for trenches. 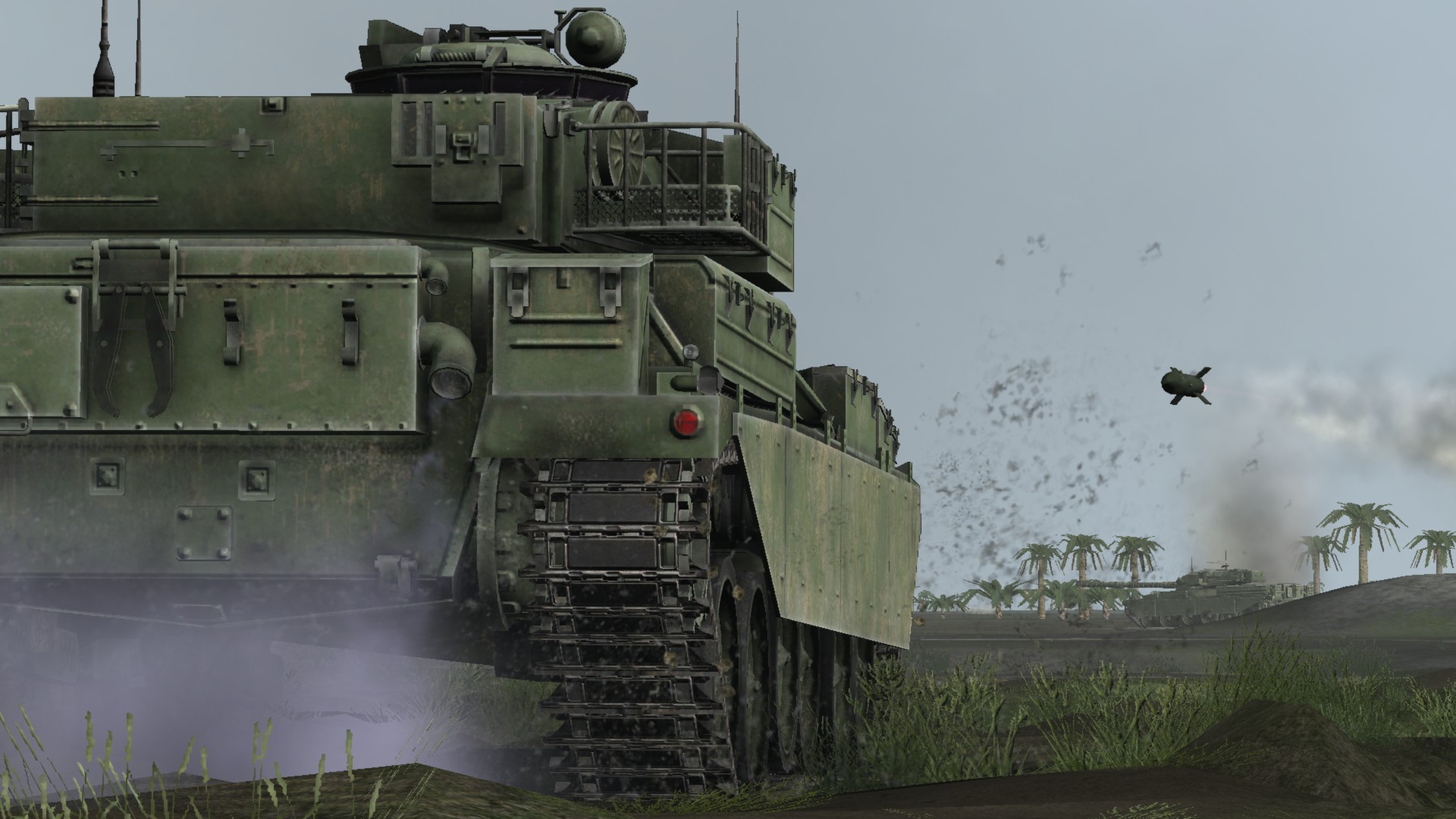 Returning after my unplanned sabbatical, I find myself a tad disappointed by the ‘Quick Battle’ mode too. While it’s very easy to set up small standalone scraps using the battle editor, without a true skirmish generator – something capable of choosing a random venue then populating it according to player preferences (battle size, type, year time of day, force balance etc) – it’s impossible for time-poor or commitment-averse tacticians to experience the truly unexpected. If such a generator existed I know I’d have reached for it frequently during the past week. 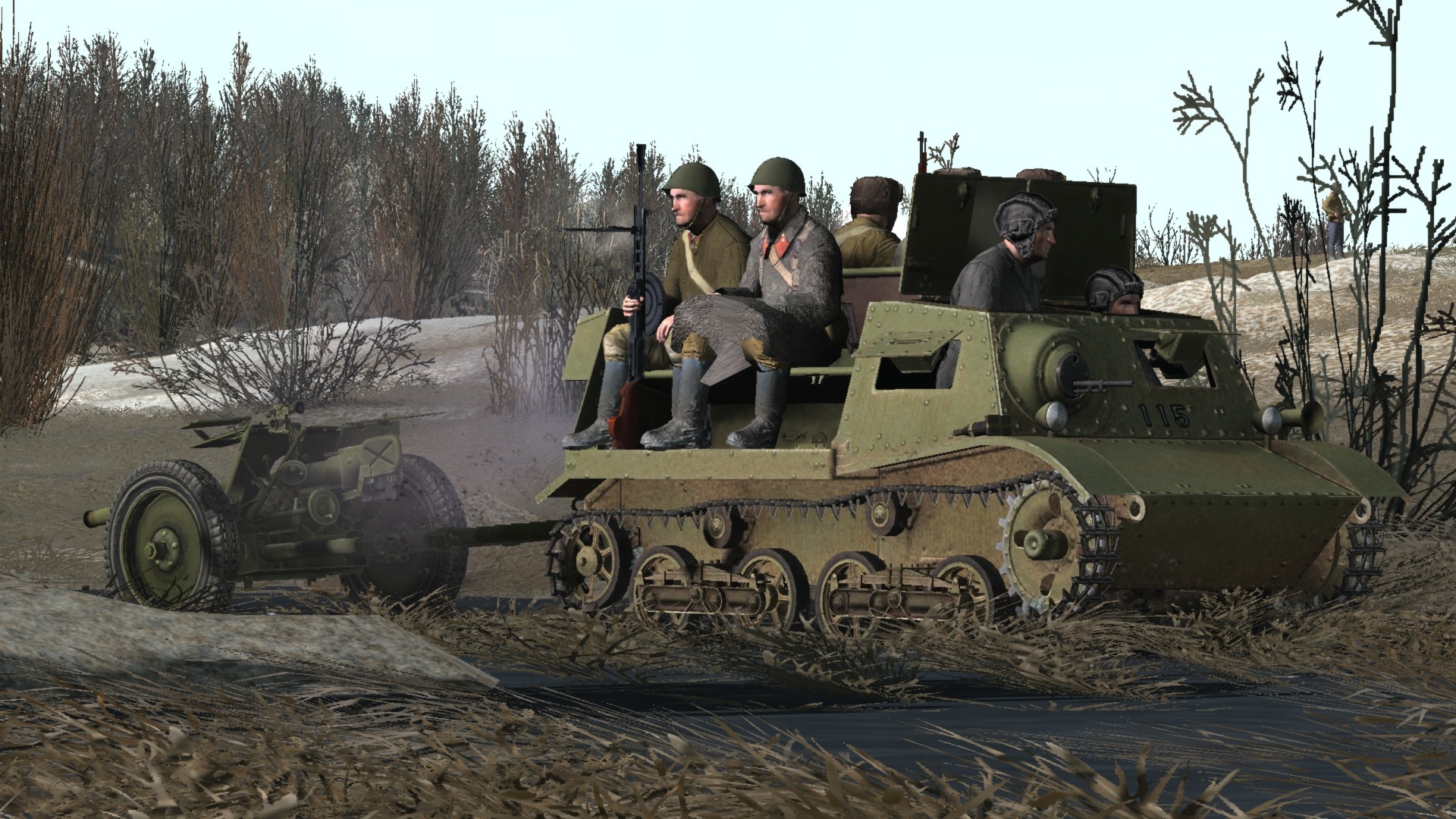