To qualify for a ‘Dusty But Trusty’ article, a game must be old enough to vote in Nicaragua, buy tobacco in Djibouti, and make the beast with two backs in Nepal. More importantly, it must be demonstrably super, smashing, great, ace, wizard, bonzer, the knees of the bee, the testicles of the dog, and the whiskers and pyjamas of the cat. You don’t need rose-tinted pince-nez or a cutting-edge pixel pump to enjoy 24 karat golden oldies like… Steel Beasts. 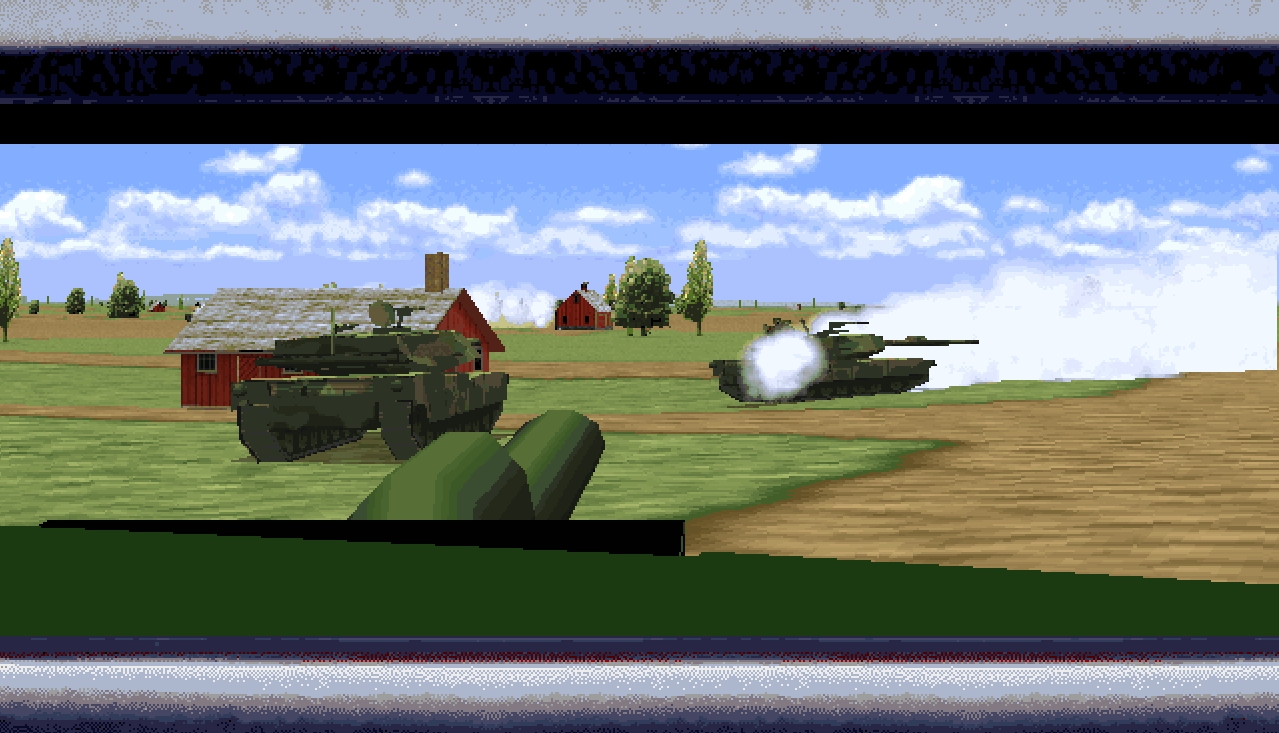 2000 was a year of blood moons and frog showers in Simulatia and Grognardia. The year’s most talked about wargame was the creation of a tiny indie outfit called Big Time Software, and the lion’s share of the sim that denied the likes of Combat Flight Simulator 2, Enemy Engaged, and Jane’s F/A-18 a clutch of “Best Simulation of the Year” awards was made by two chaps whose names had never appeared on a credits screen before.

Earlier this week, I asked one of those chaps, ex Bundeswehr tank commander Nils ‘Ssnake’ Hinrichsen, what he recalled of Steel Beasts’ long gestation, and he summed up the experience in two words: “exhilarating pain”.

“For Al Delaney and me it was our first computer game project. We had to master the technology, the business side of things, explore the market without having something to sell yet, and yet we were sure that we could create something that would earn us the respect of actual tank soldiers, even if it probably would not be a commercial smash hit. We burned the midnight oil in four years of sixteen hour days with hardly a break, while flunking one university degree and finishing another. We drove our significant others crazy (but we didn’t drive them away, fortunately).” 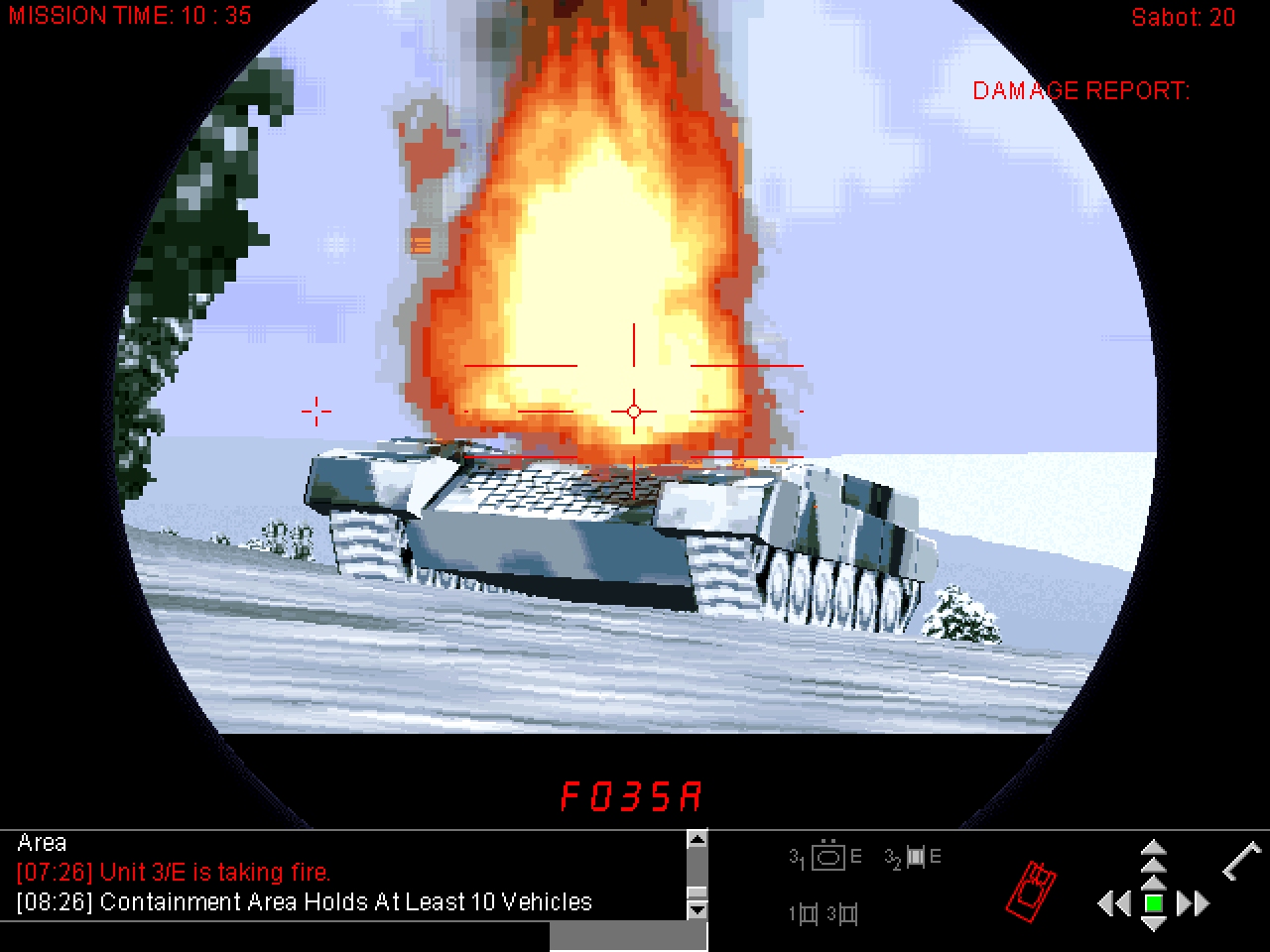 Was all the effort worth it? If you liked your military diversions realistic, thrilling, replayable, and ergonomic, the answer was an unequivocal ‘yes’. If you remember yearning for an indie golf sim circa 2000, possibly not. Al Delaney contemplated using his capable terrain engine to recreate undulating fairways and greens before plumping for lumpy modern battlefields.

Happily, most of the professional scrutineers who inspected SB when it first appeared saw beyond the fixed 640×480 resolution and the pixelated sprite soldiery and smoke. Few docked marks or withheld stars because eSim failed to provide campaigns, ignored aircraft, and opted to model two tanks – the M1A1 and the Leopard 2A4 – fastidiously instead of taking a broader ‘survey sim’ approach.

The shortcomings went unsavaged because the potential savagers had visited eSim’s sunlit uplands and discovered how much fun it was to litter them with blazing BMPs and T-72s. They complimented rather than carped because they’d encountered things they’d never encountered before in an armour sim. 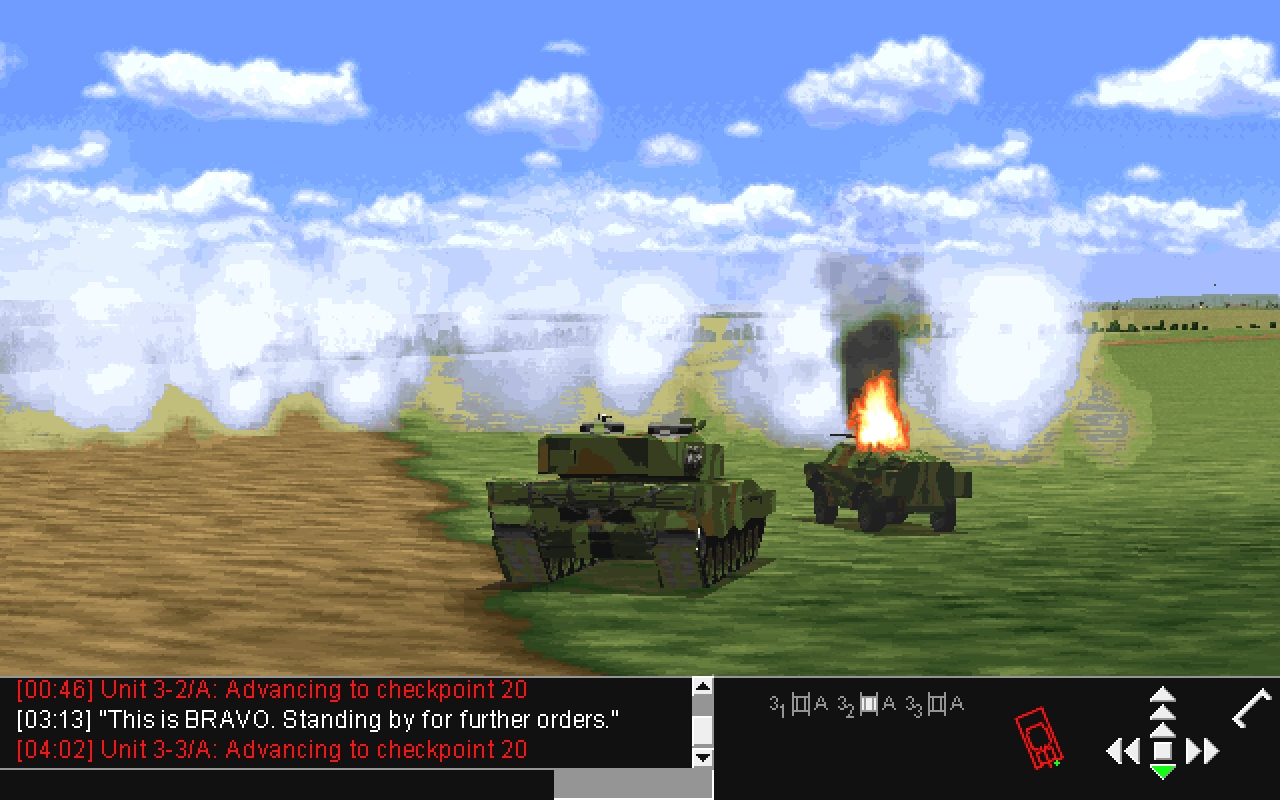 In key areas such as gunnery, AI, and mission design, SB offered more detail – more veracity – than its main rival, Microprose’s M1 Tank Platoon II. Perhaps if the realism advances had come at the expense of playability there might have been grumbling. As great tutorials, a well-written manual, and a flawless interface ensured the newcomer was almost as friendly as the sim it supplanted, the naysayers were few. 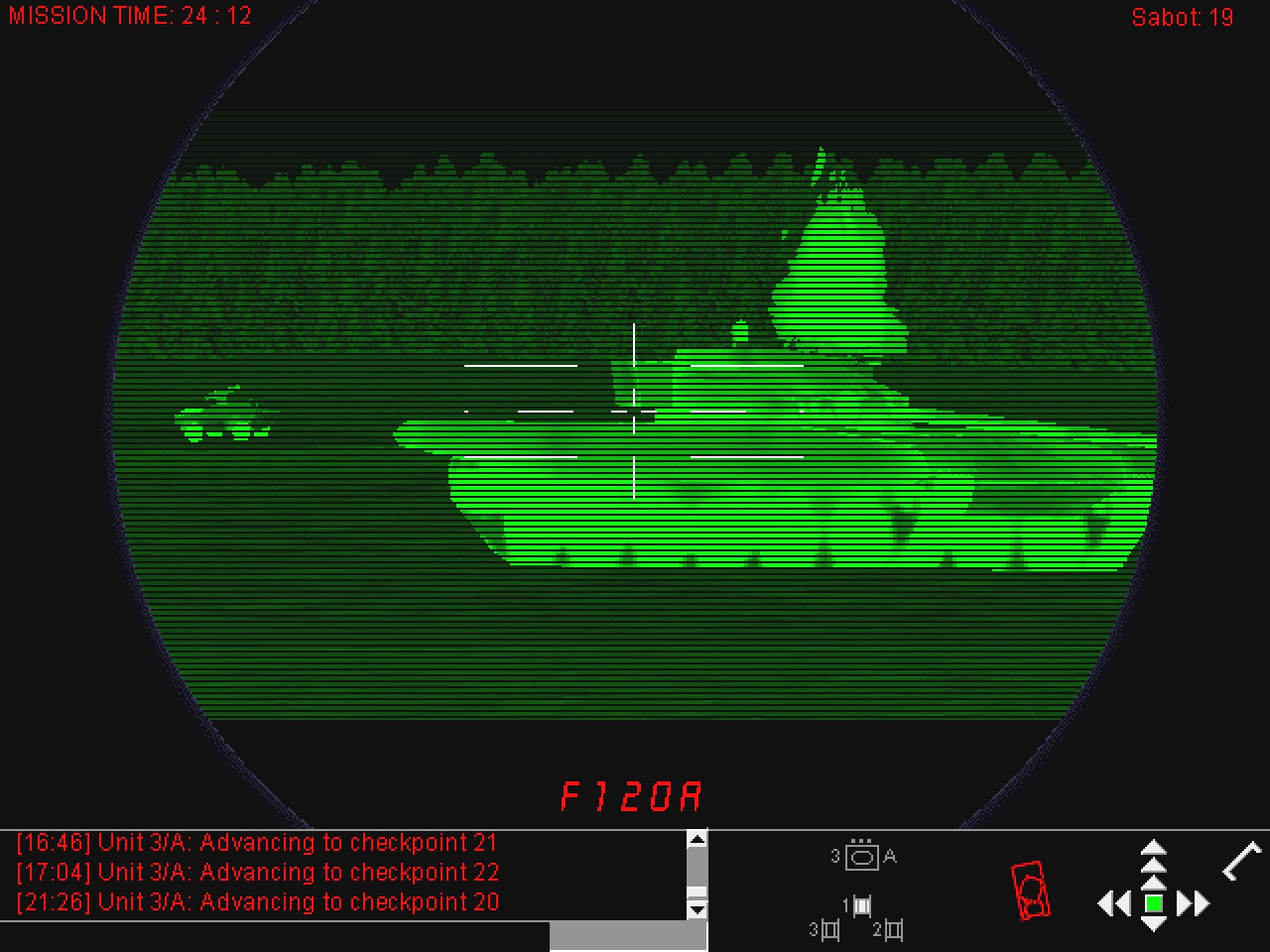 Al and Nils’ brainchild introduced armchair sabot slingers to the authentic nuances of lasing (multiple returns, LRF burn-out, ‘dumping lead’…). It plunged them into engagements crawling with AFVs that knew how to shoot-and-scoot, exploit contours and smoke, and skedaddle when ordure and fan interfaced. 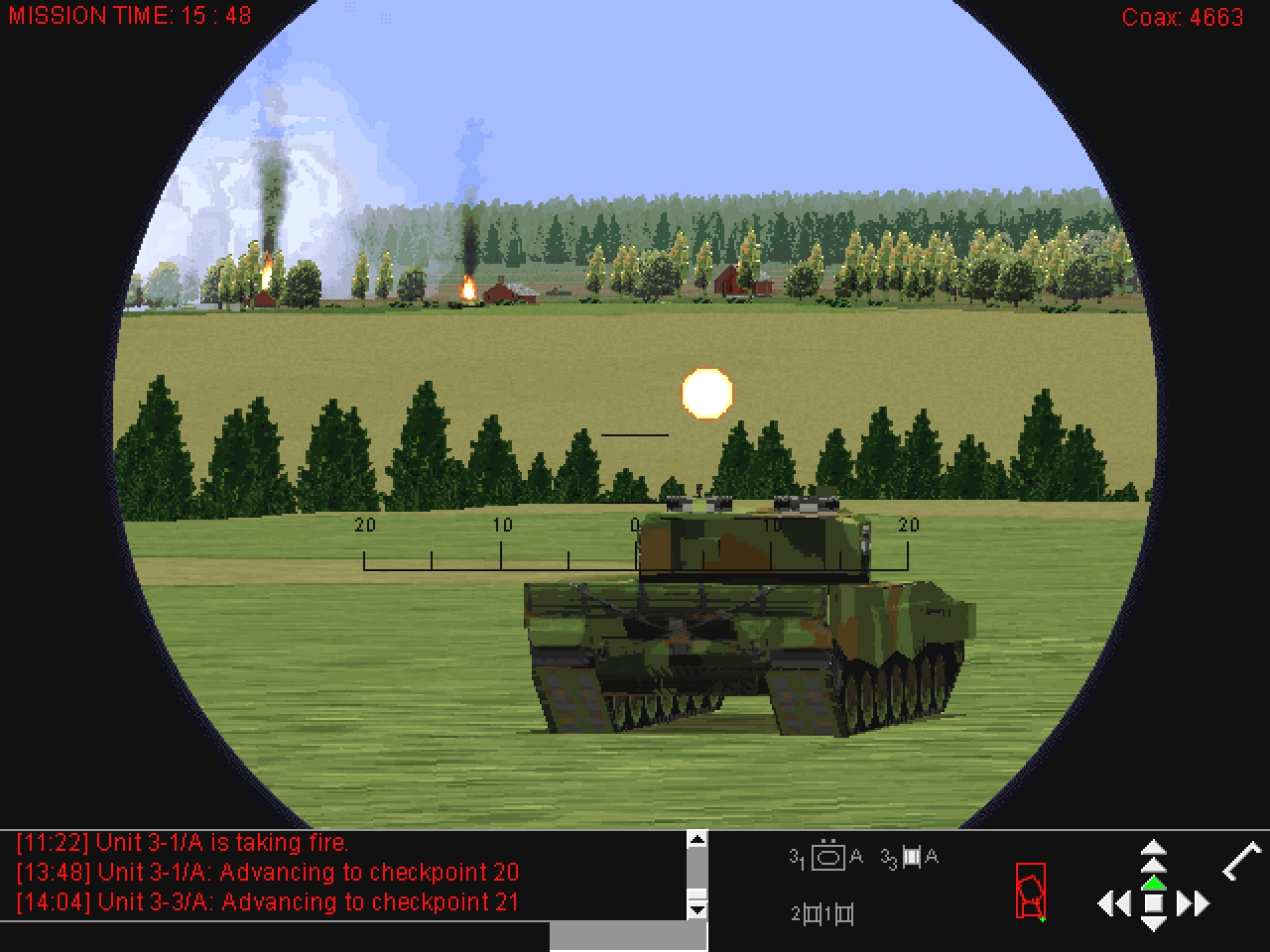 Naturally, angry houses weren’t the only anxiety inducers present in SB clashes. In many scenarios death by wire-guided AT missile or RPG was just as likely as death by APFSDS round. While technical limitations meant players never had to brave urban environments, the game’s forests with their individual toppleable trees illustrated perfectly why leafy spaces are a mixed blessing for unaccompanied MBTs. 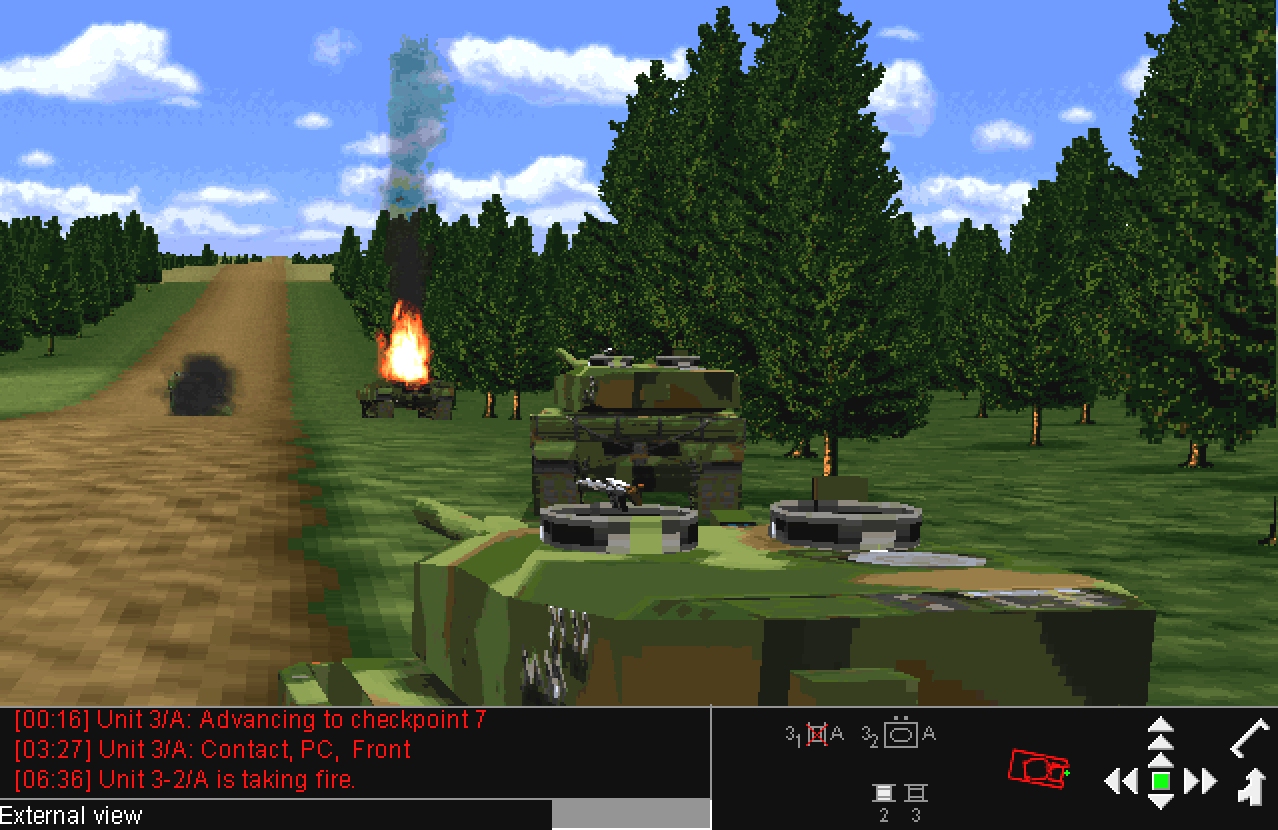 If original plans to include playable T-80s hadn’t been shelved, instant player demises would undoubtedly have been more common. Analysing SB’s damage modelling is hard without Graviteam or GHPC-style hit arrows, but given the realism in other areas I suspect the game’s varied extinctions owe more to science than smoke and mirrors. 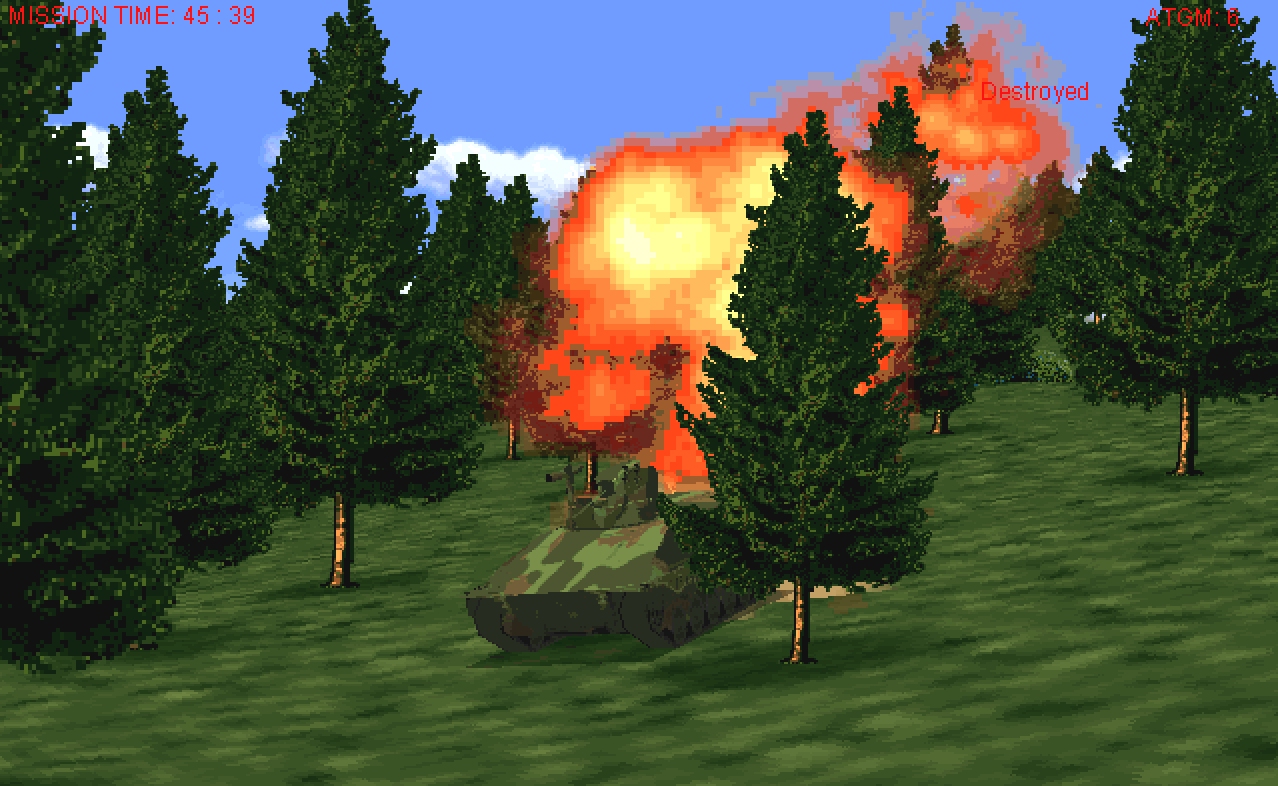 SB beastmasters lost tracks, optics, turret power, and individual crewmen on occasion. From time to time they found themselves gunlaying like blue-arsed StuG gunners. In other words, adjusting vehicle orientation with WASD keys then fine-tuning aim with the frantic cursor key presses that simulated hand-cranking.

Although anti-tank ditches and obstacles weren’t modelled (there were no trenches or foxholes either) minefields imperilled, marshes mired, and bulldozing trees and wrecks at speed was inadvisable. 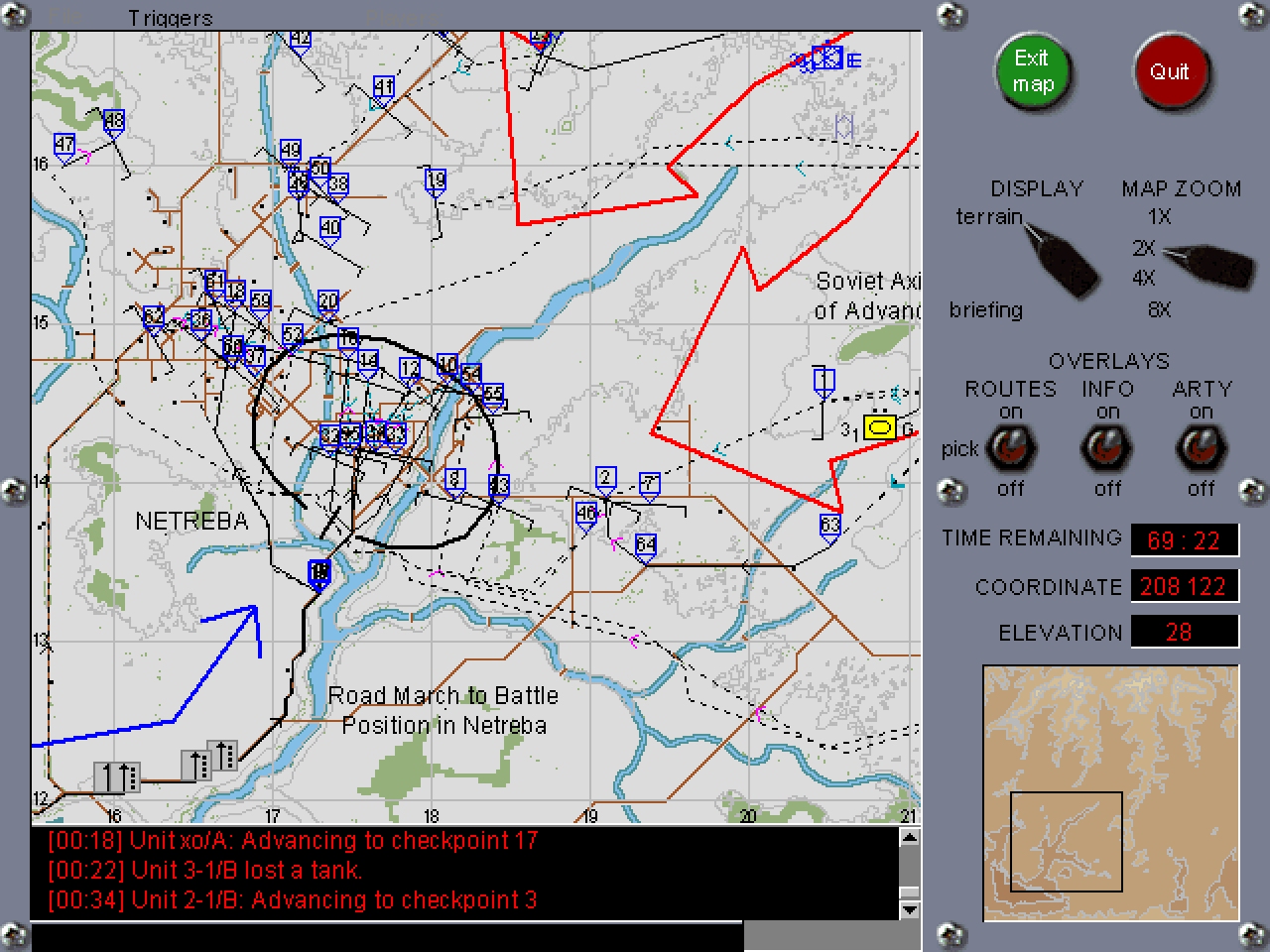 While earlier armour sims had been influenced by Subject Matter Experts, SB was the first to be extensively shaped by them. There was evidence of this in the systems modelling and the fine field-recorded audio but it was in the scenario design where it was most obvious. Many scenarios felt like they’d been cribbed straight from classified files. 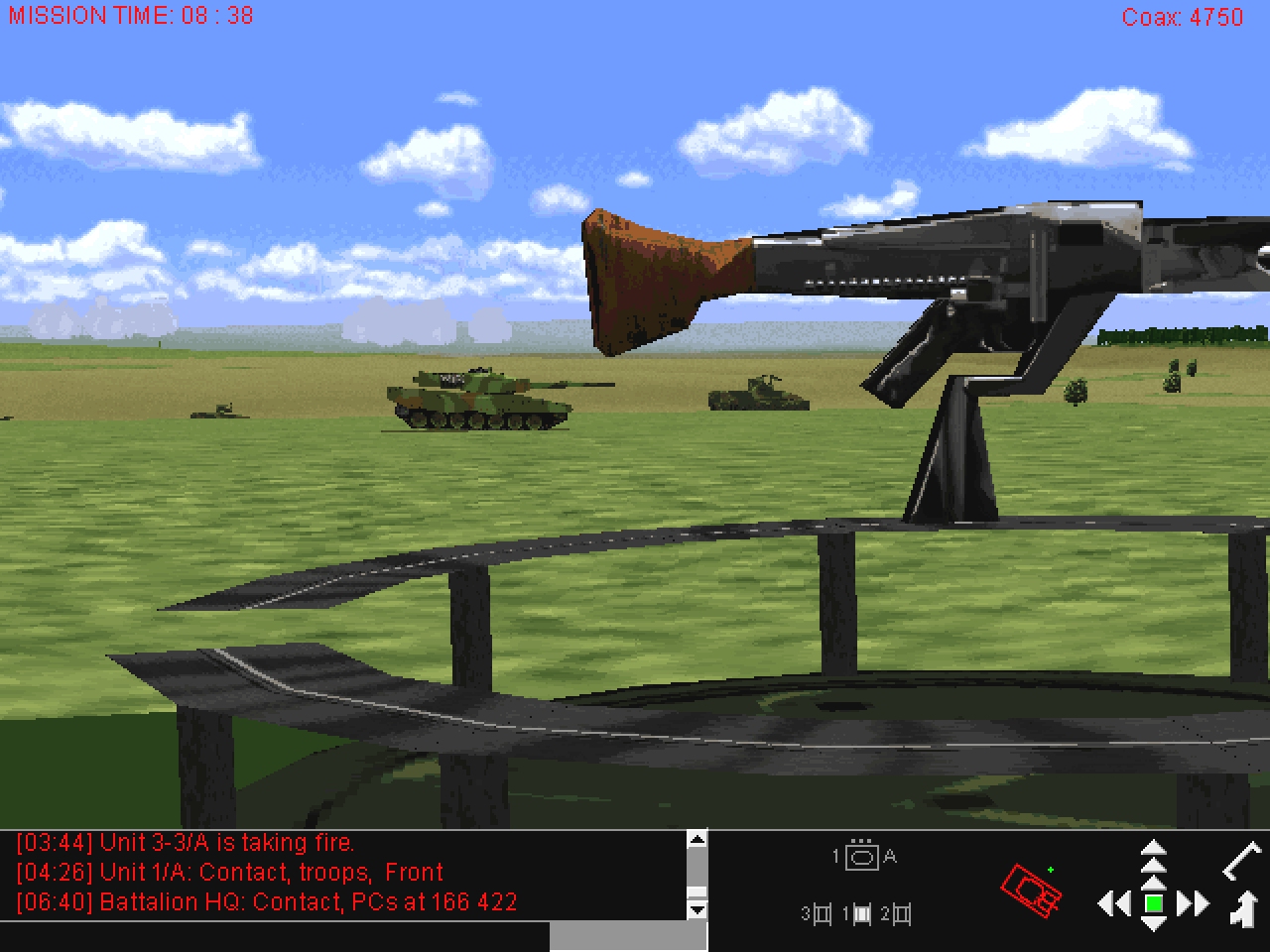 Busy, sprawling, and often laced with randomness, these rare glimpses into a previously veiled world were, to many gamers, a significant part of the sim’s allure. You could test your mettle in exactly the sort of situations real tankers tested theirs. Heck, if you embraced multiplayer, there was a good chance you’d even find yourself fighting alongside actual Leopard and Abrams crewmen now and again. In contrast to M1TP2, the newcomer allowed dozens of human players to fight on the same battlefield, and it permitted tank sharing. 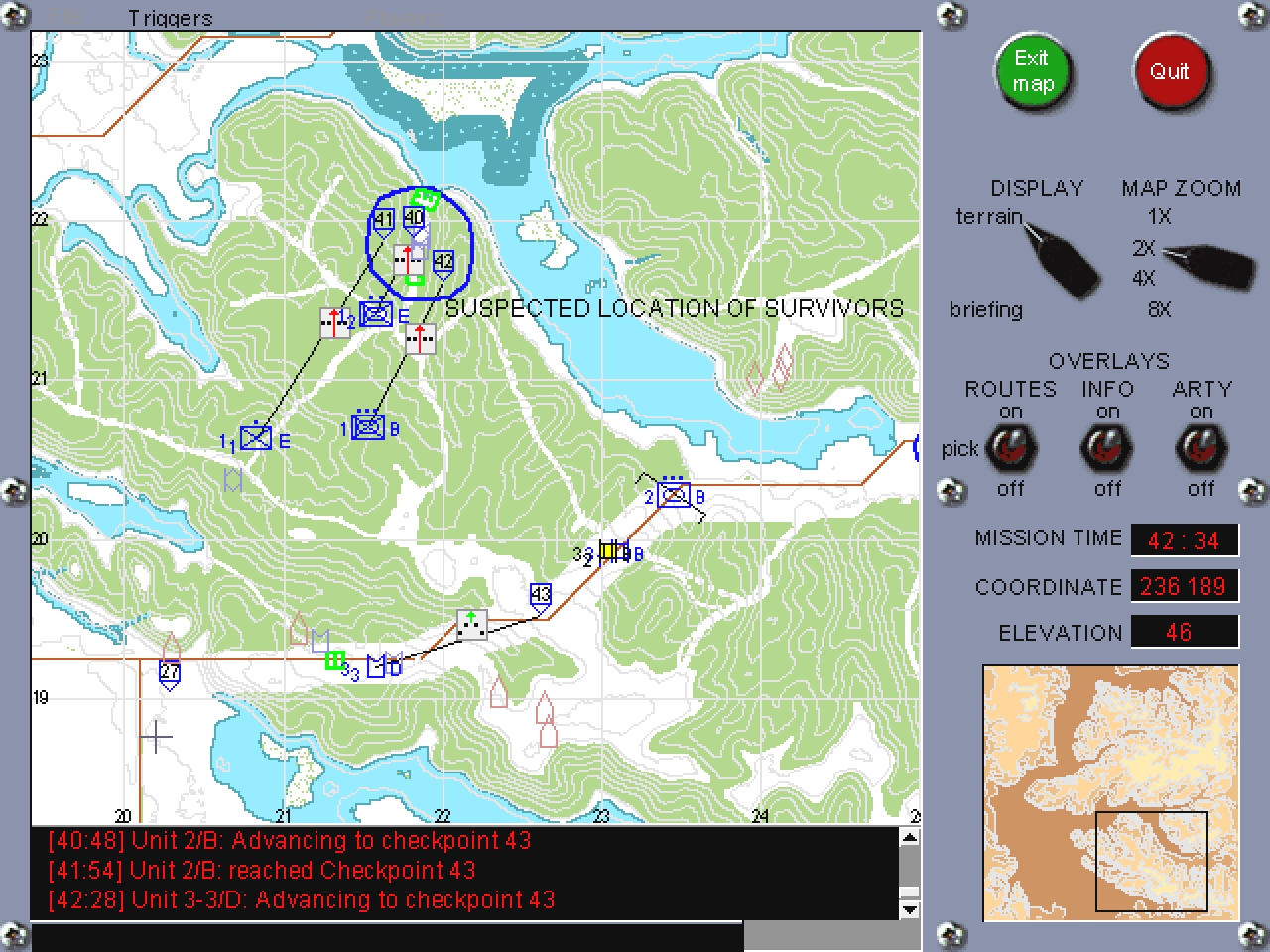 Even if eSim had failed to deliver first-person gunnery I suspect their debut release would have found an enthusiastic audience. Because driving and shell dispensing could be delegated to the CPU, anyone who wished to treat SB as a CMx2-style real-time tactical wargame was free to do so. Not only was it possible to jump between friendly units and issue various types of movement order, you could split and merge platoons and sections, alter formations, and tweak automatic engagement behaviours. Commanders interested in coordinating complex multi-platoon attacks, discouraging (or encouraging) ambitious sharpshooting, or organising sophisticated ambushes had all the tools they needed. 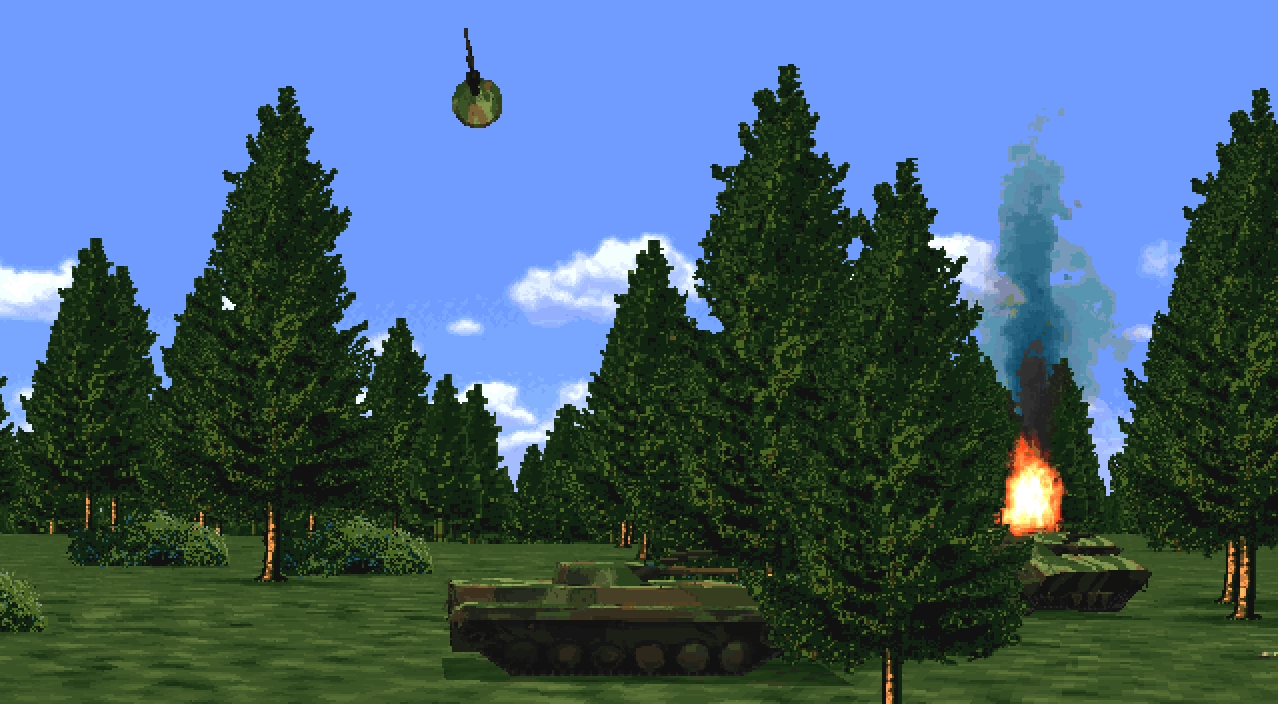 The qualities that won SB firm friends in Civvy Street and Camo Crescent (The sim served in Austria, Denmark, and the USA) shine almost as brightly today as they did in the early Noughties. Yes, if you can afford it, you’re better off playing the superior in almost every respect sequel. And, true, eSim’s reluctance to re-release (Nils: “I think re-releasing the original game would be a serious distraction for us, and to what end? You’d get something that is worse than what you can have right now.”) makes sourcing this Dusty But Trusty inductee trickier than it might be, but if your pockets are shallow or holed and your realism and AI standards high, a DxWnd-enabled* trundle down memory lane in a Steel Beasts Leo or M1A1 is highly recommended. 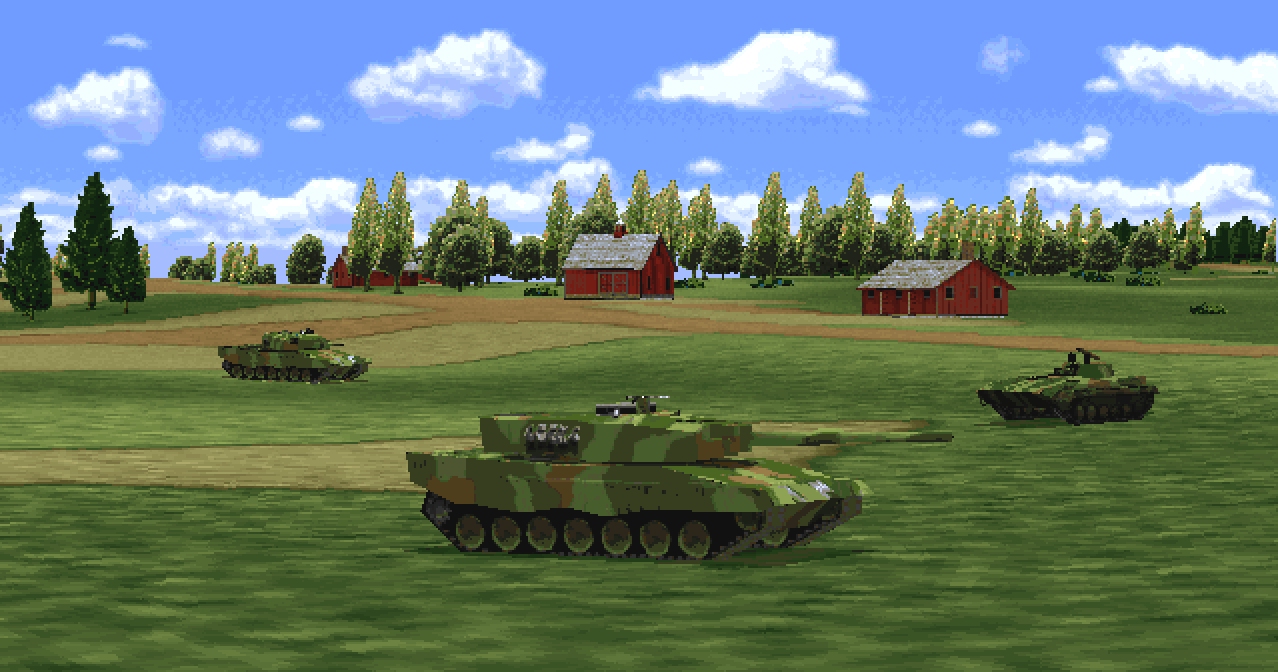 *Be sure to apply this tweak before trundling.