Two vehicles perish during the course of Turn 7. One expires quickly on the highway embankment, the other… well, read on and you’ll find out.

In the 20+ years Petar Lesov has spent in the ZAR (Zendoran Army Reserves) he’s held, aimed, and, on one occasion, field-stripped an RPG-7, but never actually fired one. “How hard can it be?” he thinks to himself as he moves to the open window, winks impishly at his seventeen-year-old son, and levels his souvenir.

Although the wheels of the PT-76 are obscured by vegetation and portions of the hull are hidden by tree trunks, its turret and triangle-emblazoned midriff are right there, begging to be crosshaired. Petar obliges, and, recalling something he once heard about RPGs and weathervaning*, sends his one and only AT rocket on its way.

* “Due to the configuration of the RPG-7 sustainer/warhead section, it responds counter-intuitively to crosswinds. A crosswind will tend to exert pressure on the stabilizing fins, causing the projectile to turn into the wind.” (Wikipedia)

The rocket passes close enough to one of the fir trees in box 76 to scorch bark and spook squirrels, but not close enough to spoil its trajectory. That trajectory is a tad high, however, it does intersect with the PT-76’s turret. For a few seconds it appears the tank has survived the hit.

Then, moments before our advancing BRDM establishes LoF and needlessly opens fire, a shocked crewman scrambles through the hedge and CM crimsons the unit’s selection halo proving it’s dead.

While the Lesovs are scrutinising the PT-76 for signs of life, on the other side of the agri merchant’s yard Recon Team Alpha are laying down the LAW. Having recovered from its grenade funk, the New Farm BMP ascends the embankment for a second time and quickly regrets it. 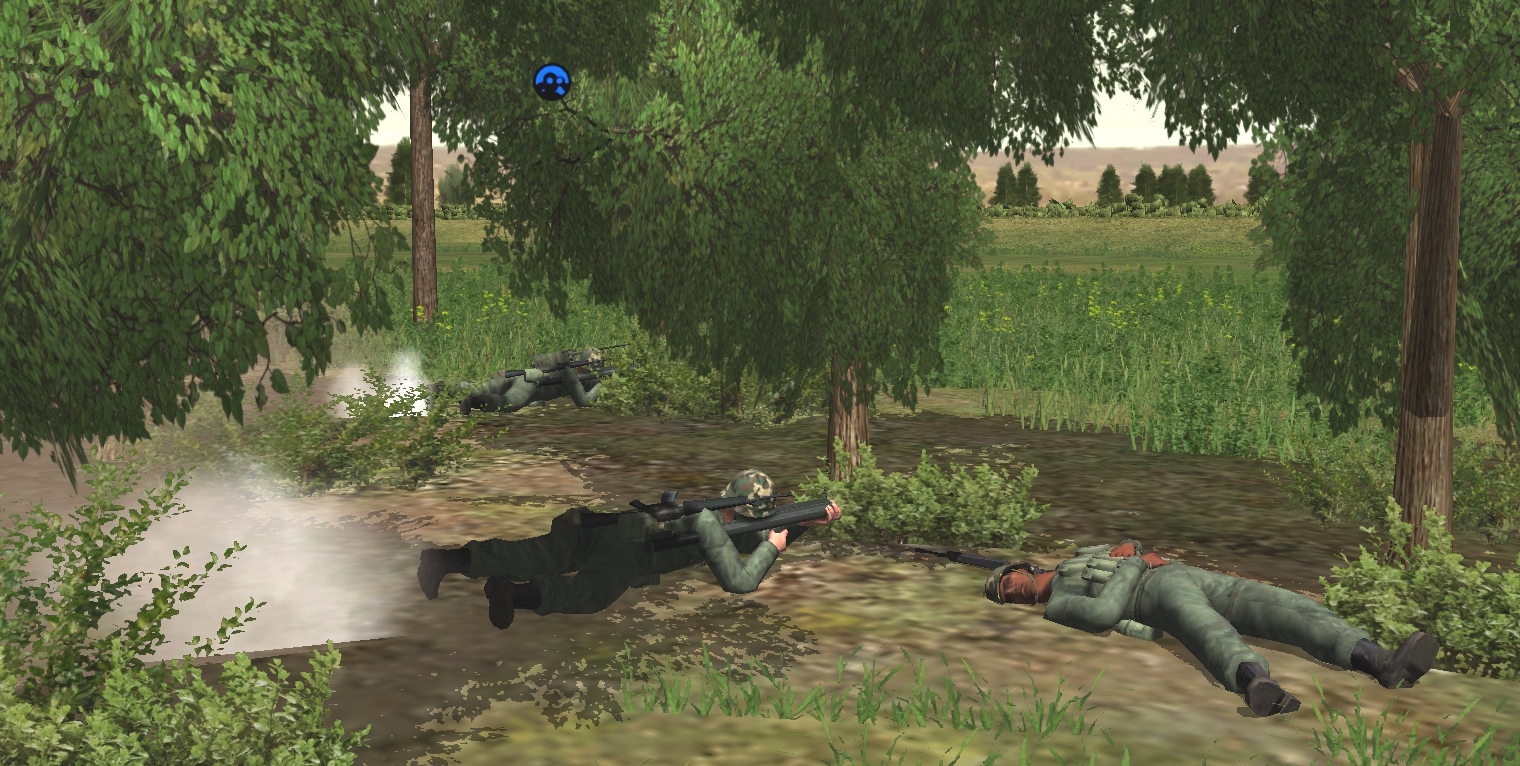 Keen to finish a job they started in Turn 5, Alpha opt to fire both of their LAWs almost simultaneously. One is wayward, the other clouts the IFV in the jaw, instantly KOing it.

We’ll never know whether that kill saves Viktor’s bacon. Even if the New Farm BMP had been operational at T+50, I doubt it would have been vigilant and quick enough to engage the cheeky Mutt that speeds northward across the highway ten seconds before the clock stops.

I left pathfinding in the hands of the AI driver. Evidently a bit of a daredevil, he opted to go through the box 71 fence rather than round it!

Muttley tried and failed to establish LoS to the remaining BMP (At turn end, only the Lesovs, the Snipers, and the LMG team have eyes on it)

The Forward Observers debussed and began their eight-storey climb.

The westerners – Dragon Team, Droopy, the Light Mortar Team – expended no ammo. (The Pods in box 62 seem to have retreated.)