On May 29th, 1981, after decades of dimpik rattling, the People’s Republic of Podrabia pulled said dimpik from its scabbard and thrust it deep into the eastern side of its smaller, weaker* neighbour, Zendora. Podrabia’s autocratic president, Anton Kubman, called the invasion a “border consolidation exercise” and boasted it would achieve its goals in three days. The tin-pot Ozymandias hadn’t bargained for the pluck, determination, and tactical ingenuity of the Zendorans.

Powered by Combat Mission: Cold War, this year’s play-by-comment CM experiment recreates the pivotal Strupnic ambush. On June 5th, 1981, aware that a sizeable enemy armoured column was approaching their capital along the M2 highway, the Zendorans hatched and launched Operation Oryx. While one special forces unit seized and blew up the Bile Ribnica dam, inundating the plain traversed by the M2, another slipped through enemy lines under cover of darkness, intending to ambush the confined tank caravan from a rocky protuberance known as ‘King Petar’s Arse’. 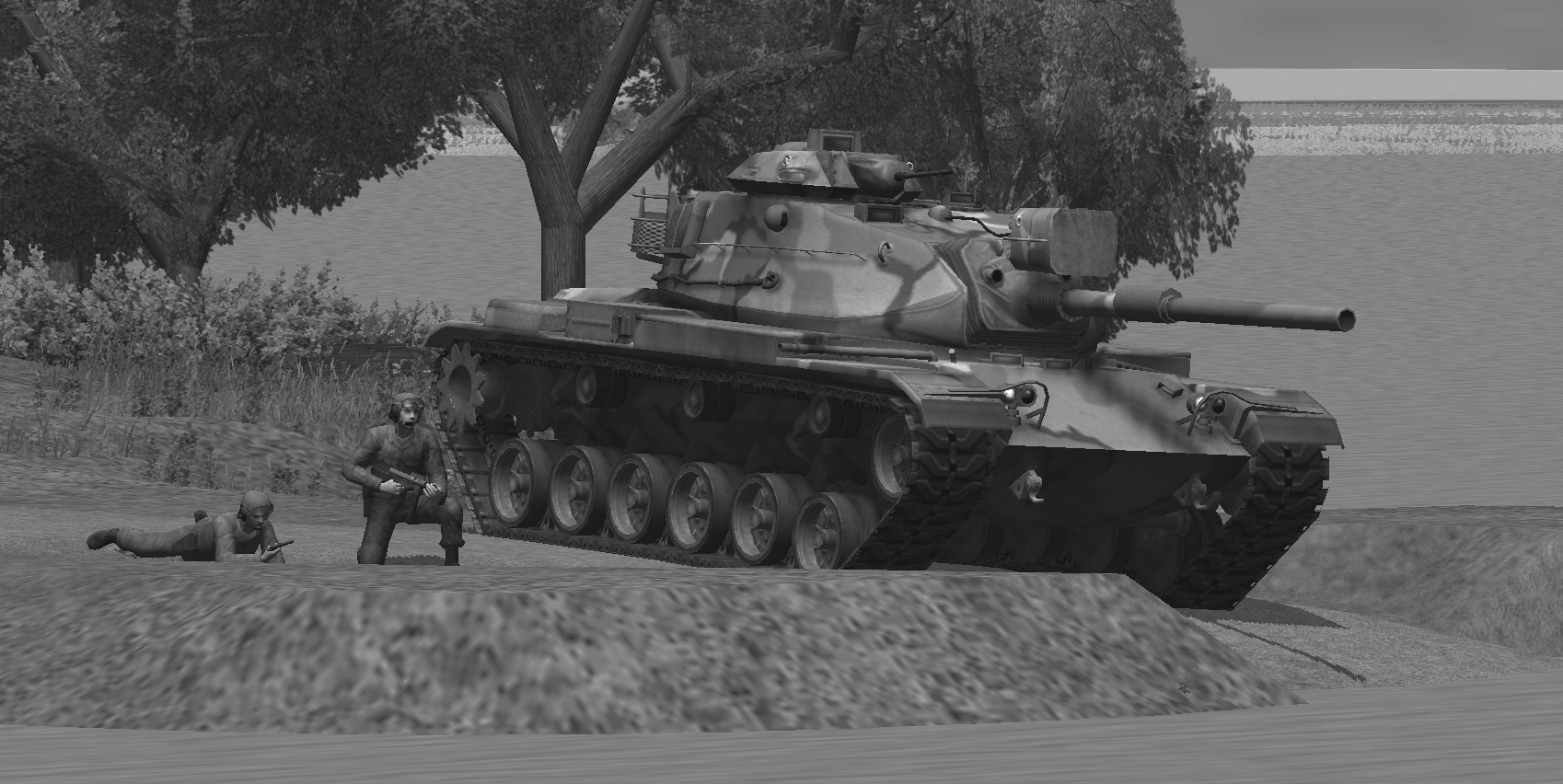 The plan almost miscarried. Unable to reach their objective (the flooding was more extensive than the hydrologists had predicted) the ambushers were forced to part company with their MBTs and divert to a less advantageous spot. Delayed and depleted, they arrived on the outskirts of the village of Strupnic a quarter of an hour before the convoy was due to pass. Tally-Ho Corner’s battle choreography begins a minute or two after the jeep carrying Major Trajanov – the architect of Operation Oryx and the leader of the expedition – is flagged down by local resident, Branko Somlac.

Branko warns the infantry-poor ambushers that the village is occupied by a party of Podrabian troops. He volunteers to take Trajanov to his brother’s house on the foe-free southern edge of the village. Viktor Somlac has been keeping tabs on the ‘Pods’ from the top of the local dovecot (Like most settlements in the region, Strupnic boasts a magnificent castellated pigeon tower) and consequently should be able to provide plenty of useful intel about their strength and positions. Better still, he’s in possession of a ‘liberated’ Podrabian vehicle which should prove bally useful in the coming battle. 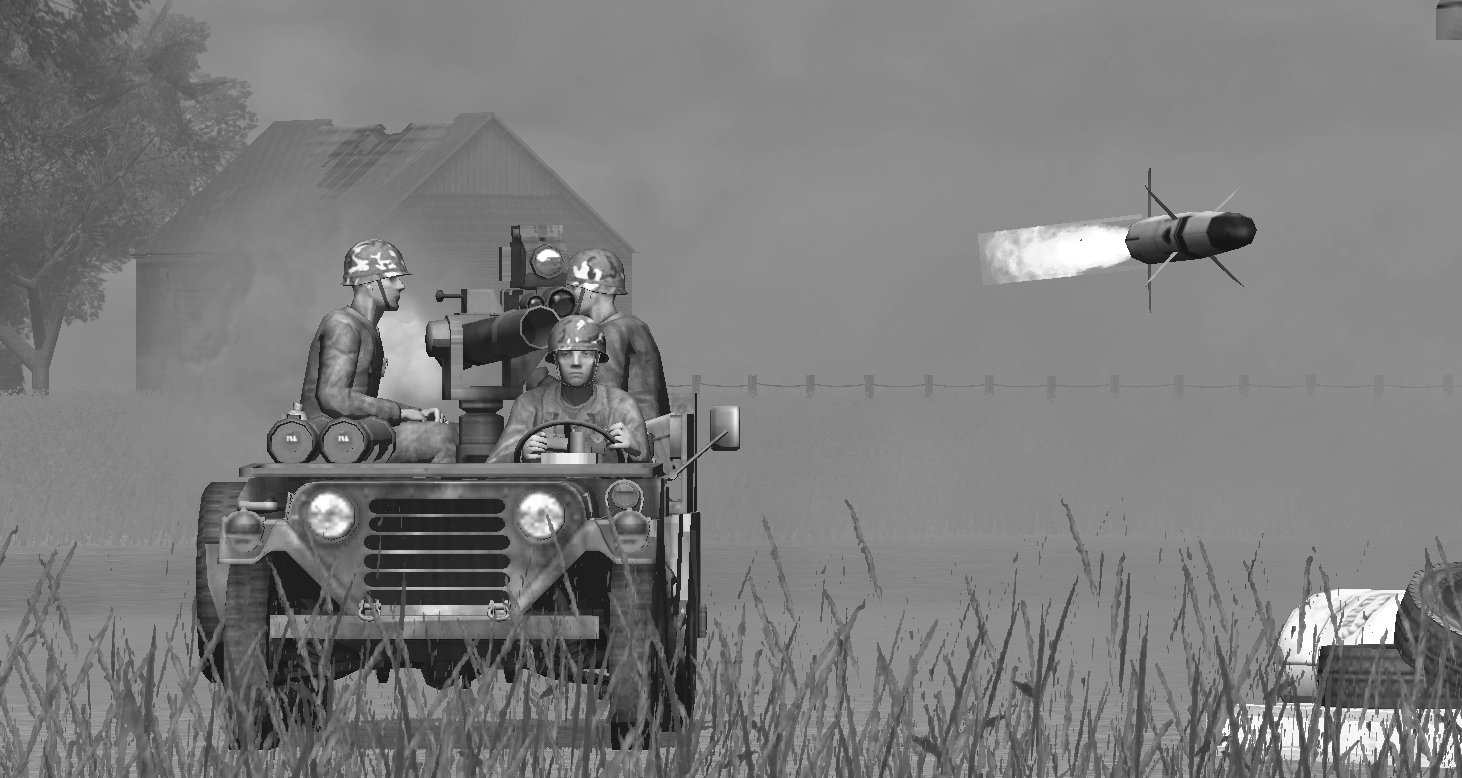 Greetings Comment Commanders! This year your goal is a pretty straightforward one. During the nexty thirty minutes/turns, using the slim selection of somewhat fragile assets available to you, destroy as much Podrabian armour as you can. The number of hostile vehicles that escape across the map’s western edge will impact my after-action performance assessment, as will friendly losses, and damage to local abodes.

A modded version of a stock map, the 1500m x 840m battleground is basically flat except for the 2m-high LoS-interrupting highway embankment highlighted in pink in the screenshot below,  and the 1m-high berms highlighted in purple.

Assuming they avoid flooded areas, ponds, and the handful of walled yards and gardens (the light orange lines on the map represent fences), vehicles should be able to go just about anywhere with little risk of bogging or immobilisation.

I’m trialling a new coordinates system this year. At first glance it seems more complicated than the old one, but I’m fairly confident it will actually prove friendlier. To give a detailed movement instruction, you’ll now need to provide three numbers – the large ‘box’ containing the destination square, followed by x & y coordinates indicating the precise square. In the screenshot above the square highlighted in purple is 62,10x,3y. The one highlighted in green is 63,3x,9y. At times providing x and y info won’t be necessary. For example you may find yourself typing “Target the truck in box 64” or “Reverse back down the road, halting on the edge of box 101”

Various views of Strupnic and its environs:

^ Looking westward. The Zendorans begin the scenario in the woodland in the top-left of the image.

^ The view North across the village.  The transparent house belongs to local resistance fighter Viktor Somlac.

^ The village centre. The half-timbered building on the left is the hotel.  On the right is the garage.

Intel reports indicate that the convoy consists of around 30 vehicles, the majority of which are MBTs. As most of Podrabia’s tanks are T-62s, expect to encounter a fair few of these Sixties throwbacks in the turns ahead. Since crossing the border the convoy hasn’t exactly dawdled. We suspect it will try to bypass trouble rather than confront it, but anything is possible. 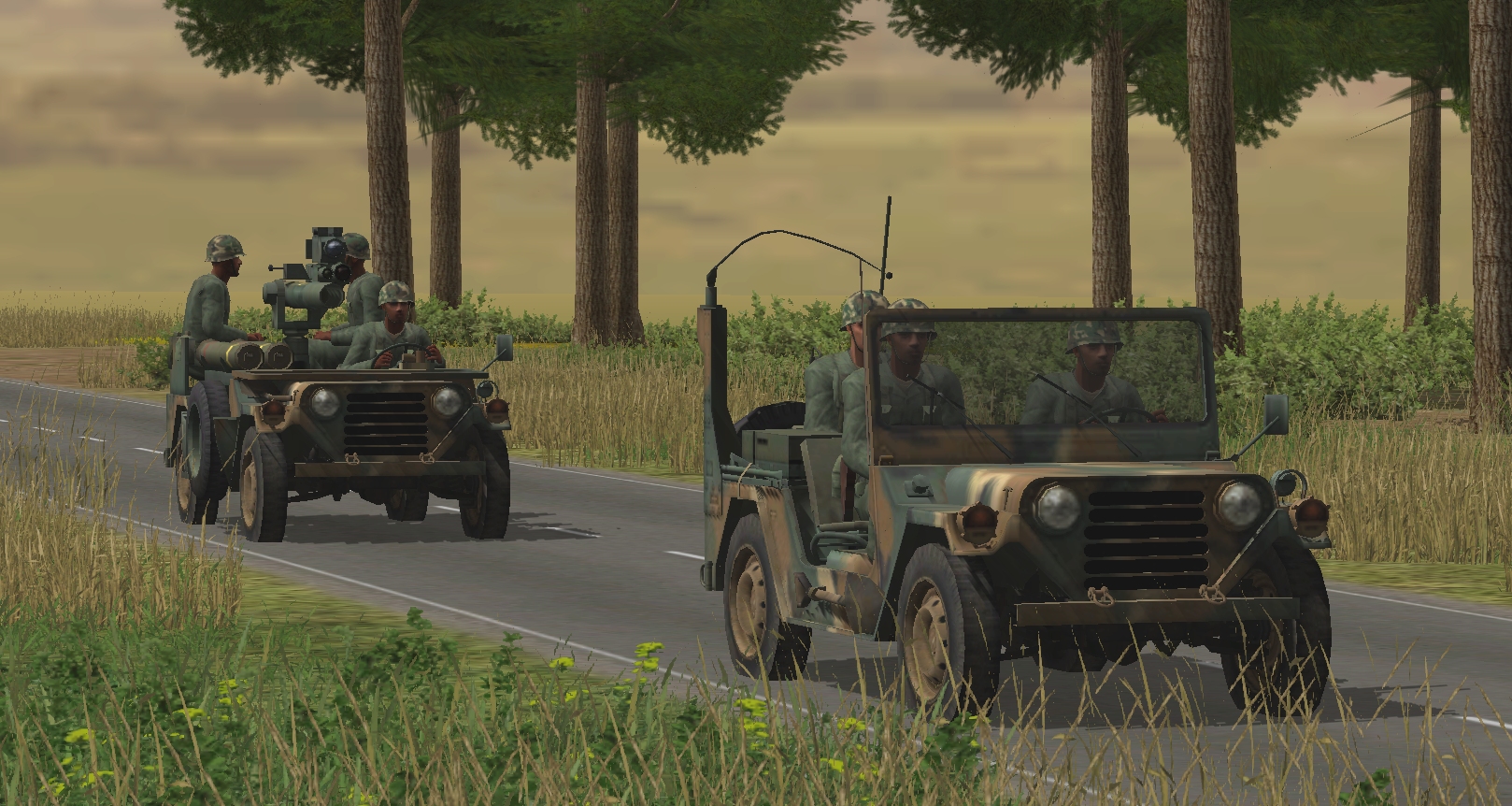 In 1981 the Zendoran Army fielded an eclectic mix of NATO, Warsaw Pact, and locally produced equipment. Champing at the bit in the south-west corner of the map at the start of the scenario are…

^ A BRDM-2 recon vehicle with a three-man, LAW-equipped recon team aboard in addition to its two-man crew. 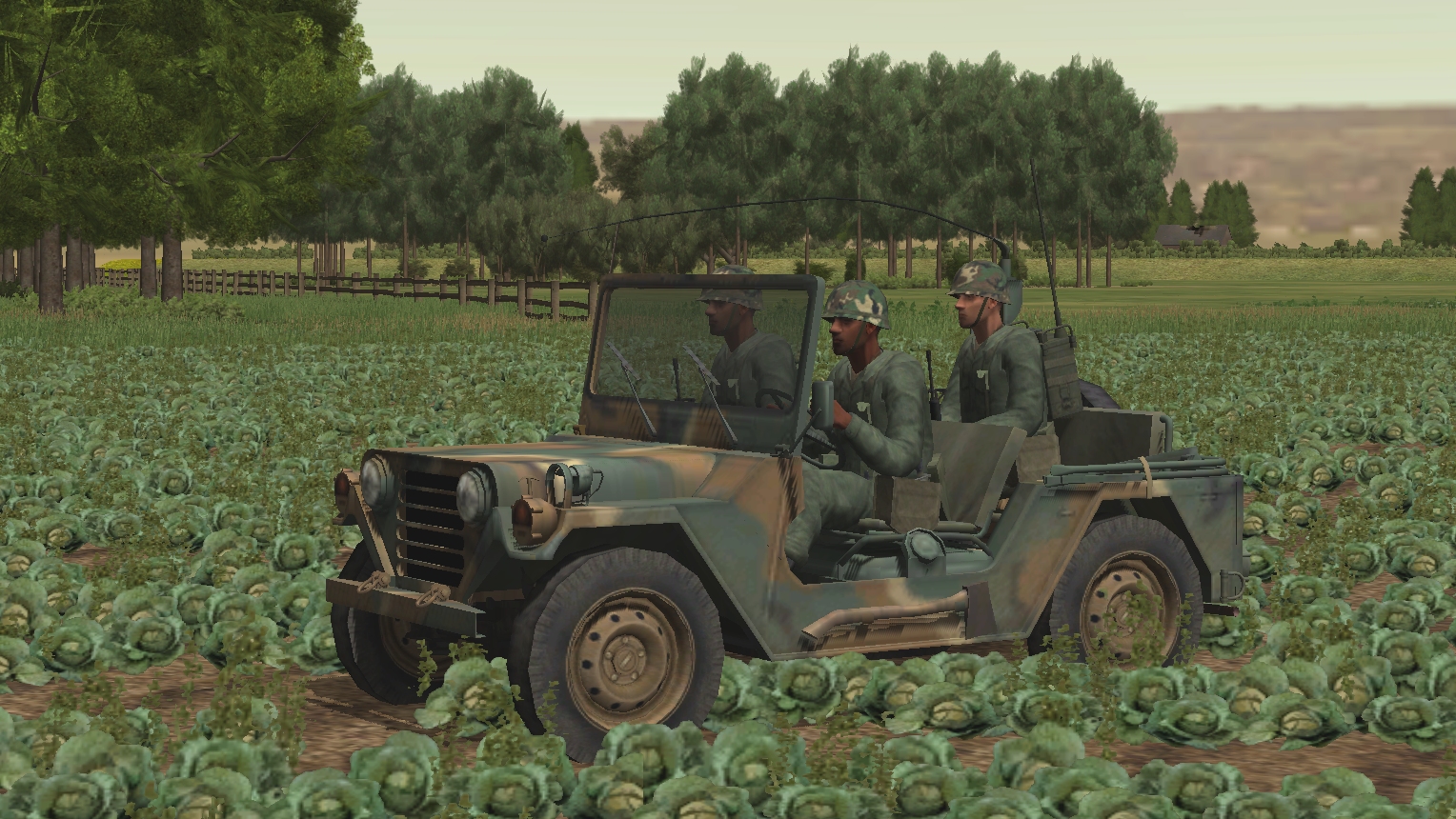 ^ The M151A2 ‘Mutt’ transporting Major Trajanov and his radio operator. 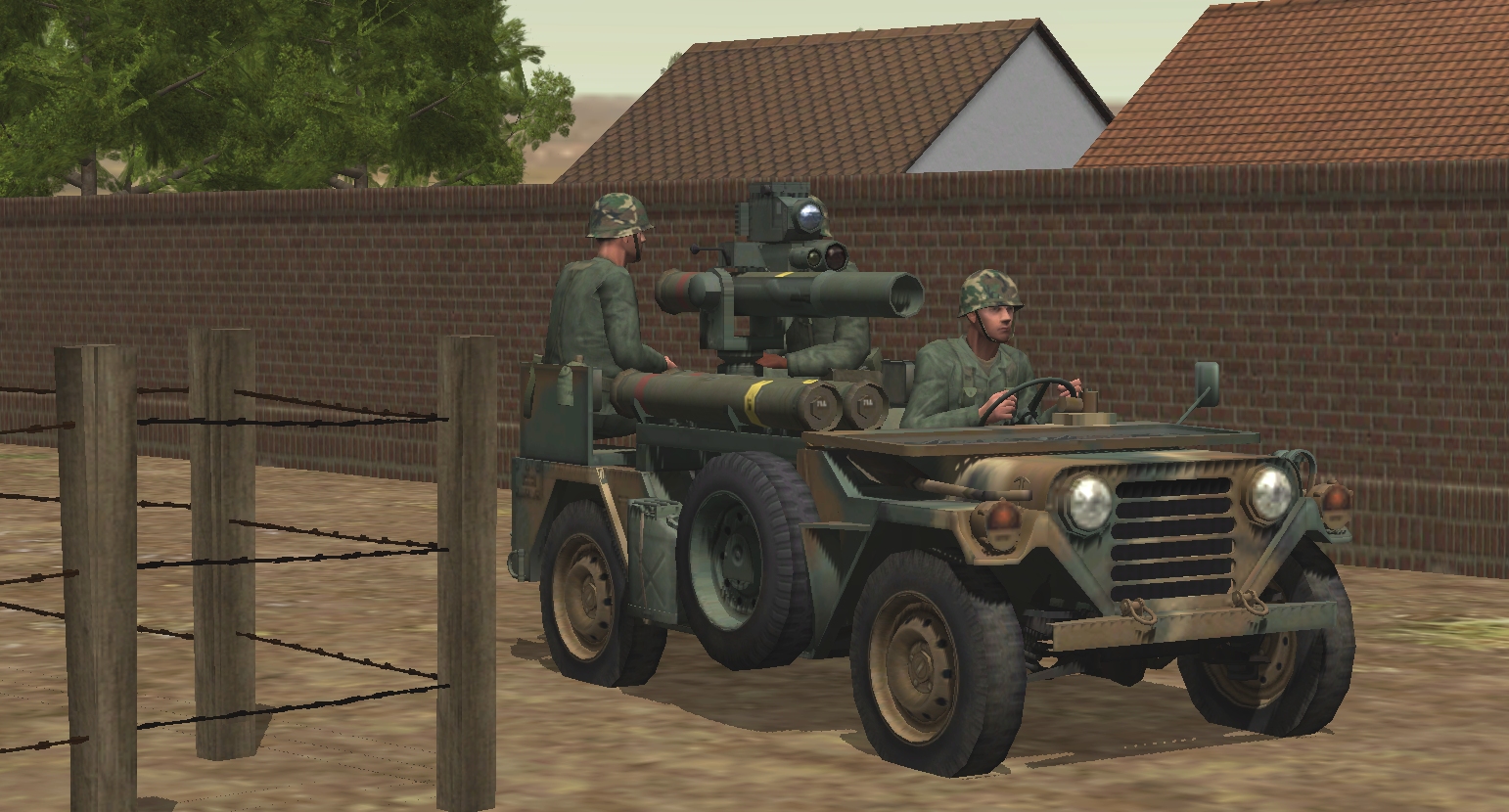 ^ A Mutt adapted for tank hunting. In CMCW M15A2 (TOW)’s carry an impressive eight missiles, but inexplicably (?) seem reluctant to use the last three unless the launcher is first removed from the Mutt and deployed on the ground. In both configurations reload time is circa 30 seconds. 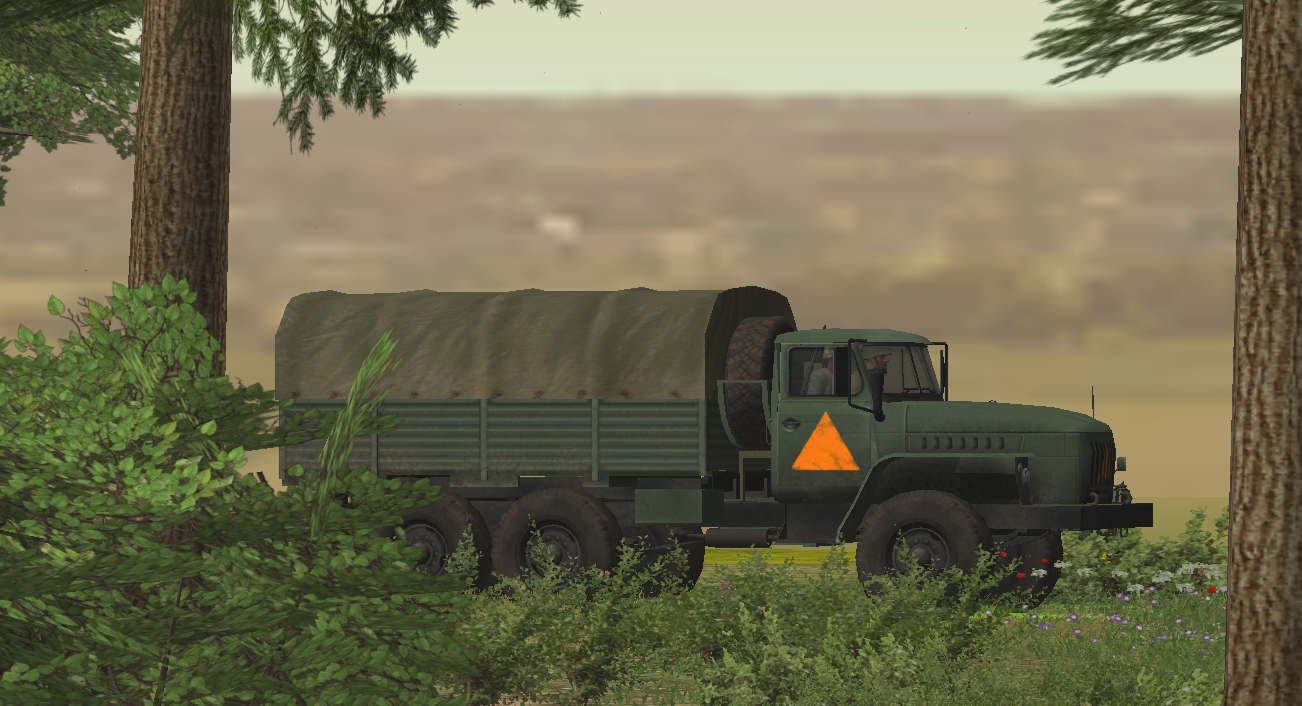 ^ Two loaded M113 APCs, one of which is about to depart without disembarking its passengers because Trajanov has just decided that his off-map heavy mortar battery (two 107mm tubes) needs additional protection. (The first player to issue an order to an M113 effectively decides whether it’s the APC carrying the two three-man LAW-equipped recon teams, or the APC carrying the four-man grenade launcher team that participates in the coming battle.)

Reinforcements? Slightly delayed by a map-reading blunder is a second TOW M151A2, and a Mutt taxiing a forward observer team – the eyes of the aforementioned heavy mortar battery. Oh, and be sure to talk to Viktor.

Just in case you weren’t around for last year’s Dutch escapade, here’s how Play By Comment Combat Mission works. Every turn, via a comment along the lines of “Turn 1 orders here, please…” I solicit written instructions for friendly forces. Orders are accepted on a first-come-first-served basis with individual commenters usually only permitted to ‘move’ a single vehicle, infantry squad, or weapon team per turn. Embarked infantry and their transports are treated as single units until separated.

For example… in Turn #1 Invincible_Vince might direct Trajanov’s jeep to Viktor’s house while Cherubik manoeuvres the BRDM, and SlowDoris does something with the M113. During the next order round Concordski might order the disembarked scouts to investigate the building at 75,2,2, while LMF retasks the APC, and Shropshire_Lass oversees the armoured car. 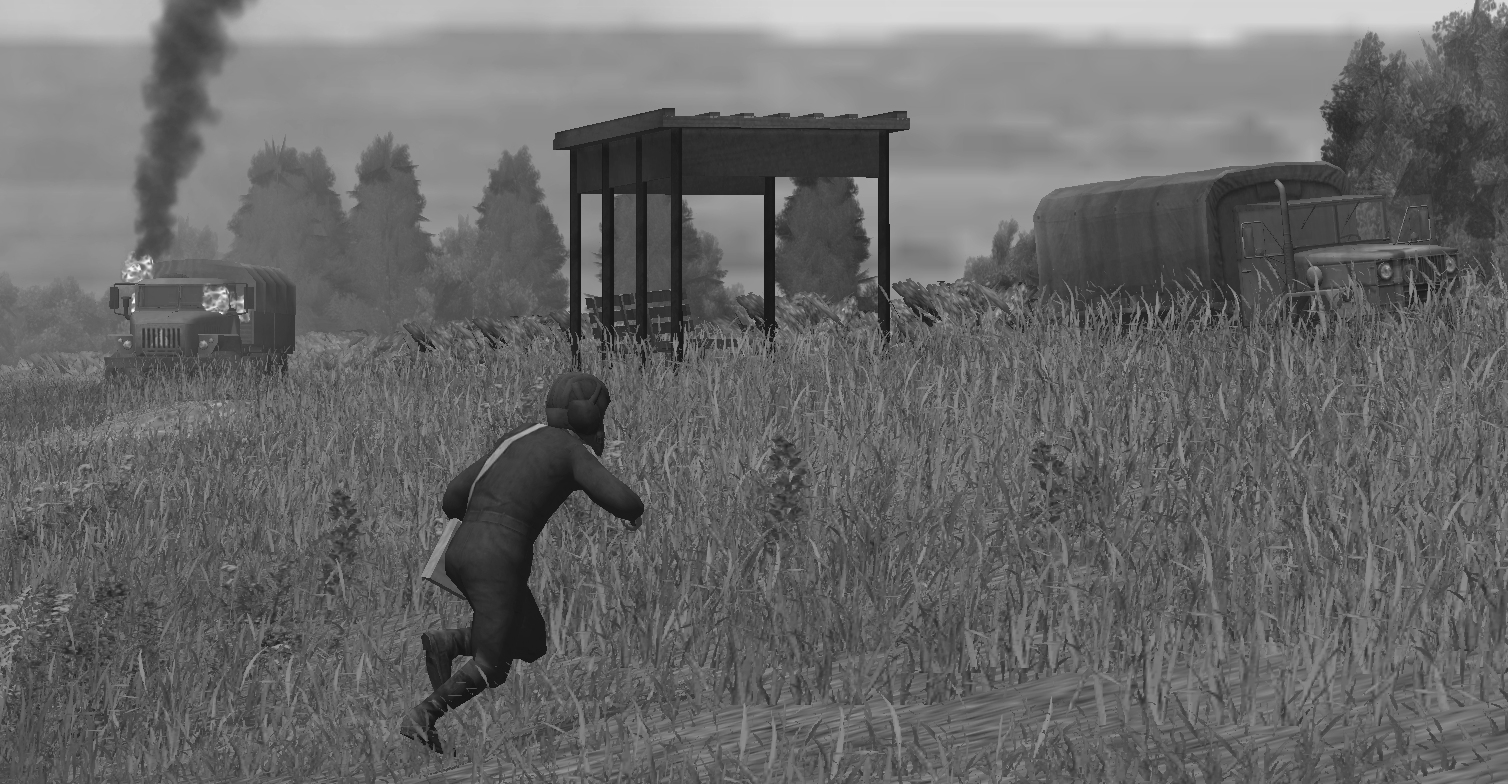 On the evening before a turn report appears (My intention is to post turn tales on Monday mornings and, possibly, Thursday mornings too) I’ll execute all issued orders and record what happens. Did our nippy TOW-truck nail that cocksure T-62? Did the scouts manage to cross the road unscathed ? All will be revealed.

Keen to reward the readers who, by subscribing, are ensuring the survival of THC,  I’ve decided that some of the units participating in Operation Oryx will answer only to Comment Commanders with brown names. If you’ve subscribed and have yet to be browned, or have donated this year and would like to be browned for the duration of Operation Oryx, please contact me and I’ll do what needs to be done. 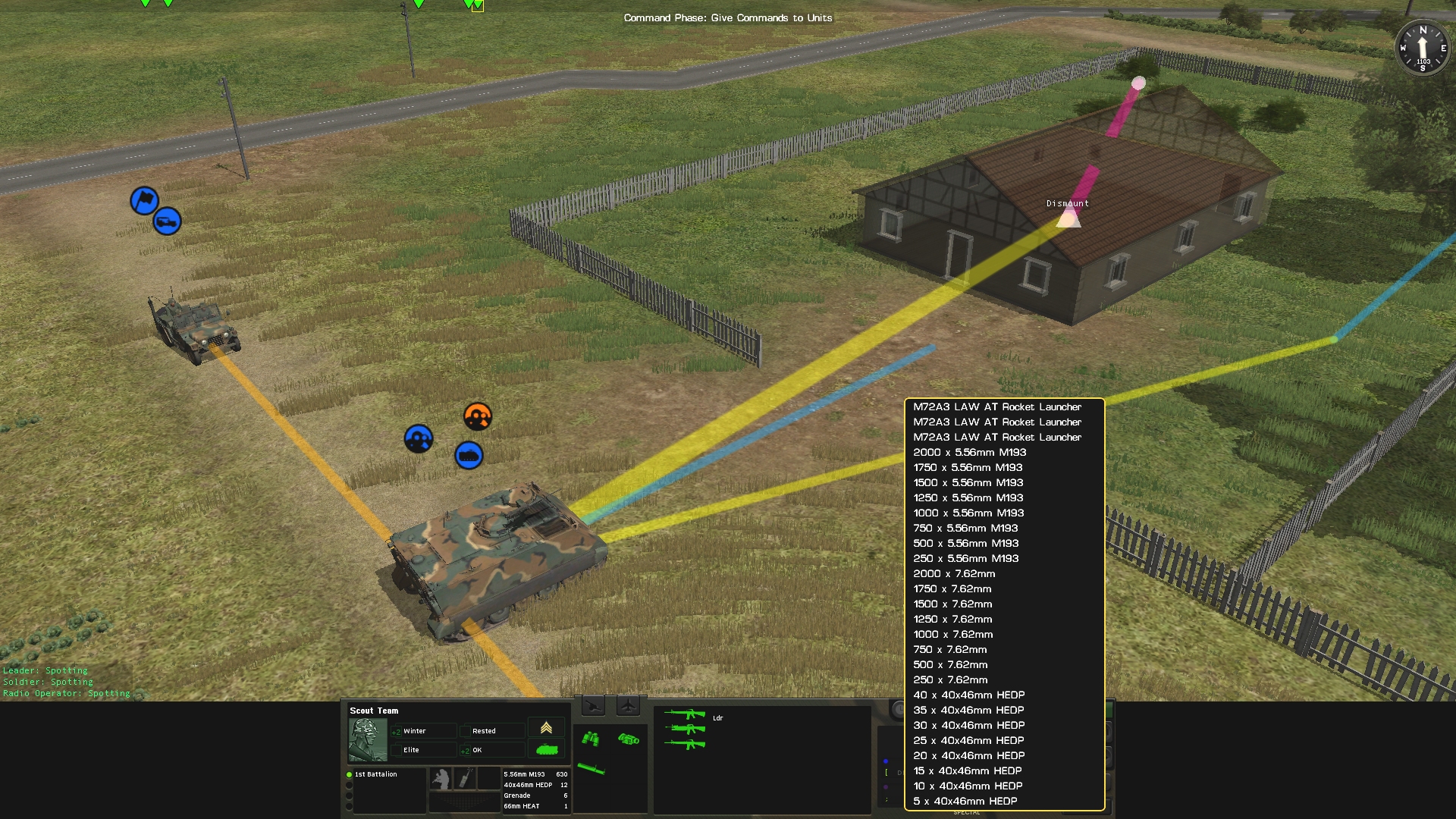 You don’t need to understand the intricacies of Combat Mission: Cold War in order to participate. Consider the tactical situation, and provide a destination coordinate and perhaps a clue to pace/cautiousness and I’ll do my best to translate your instructions into successful in-game orders.

During the sixty-second non-intervention ‘action phases’ that follow order issuing, units may encounter a threat or target that causes them to abandon or modify your instructions. For example, vehicles can decide to reverse if they don’t like the situation they find themselves in. Specific targeting instructions may be issued but usually combatants can be relied upon to self-select targets sensibly.

CM’s hidden ‘hotspot’ system can make fine control of infantry tricky, and the game’s mortar limitations may surprise newcomers used to the more relaxed/speedy approaches to indirect fire in other titles.

The CMSF2 demo is a great place to start if you’re unfamiliar with CM play mechanics. I’ll do my best to answer any technical questions that arise, but as I know the original trio better than I know the second gen titles, I’d be very grateful if spectators and players with more experience furnished explanations and proffered advice too.