Fairly static, decidedly lopsided, and certain – in a purely military sense – to fail, the Easter Rising doesn’t, on the face of it, look like a promising subject for a traditional computer wargame. Mix in an AI famed for its flakiness, and the prospect of compelling combat choreography seems remote indeed. I approached the latest Wars Across The World adjunct the way a statistician approaches a scratchcard. Finding something so rewarding under the thin layer of foil was a very pleasant surprise. 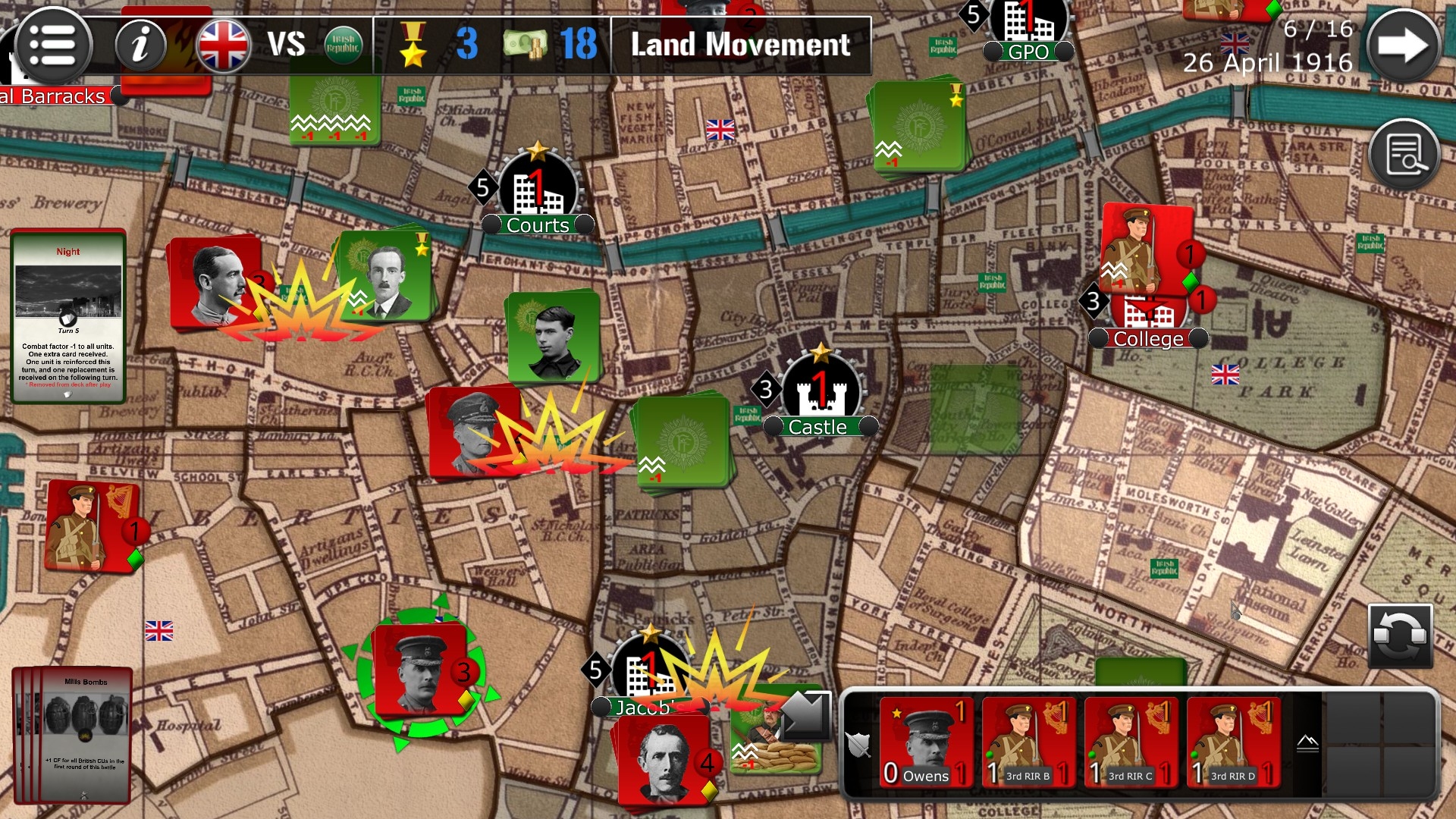 Would I be as keen to recommend Dublin 1916 if it hadn’t nudged me toward a bevy of fascinating Easter Rising history books and podcasts? Would I lionise it quite so fulsomely if it was £20 rather than £2? 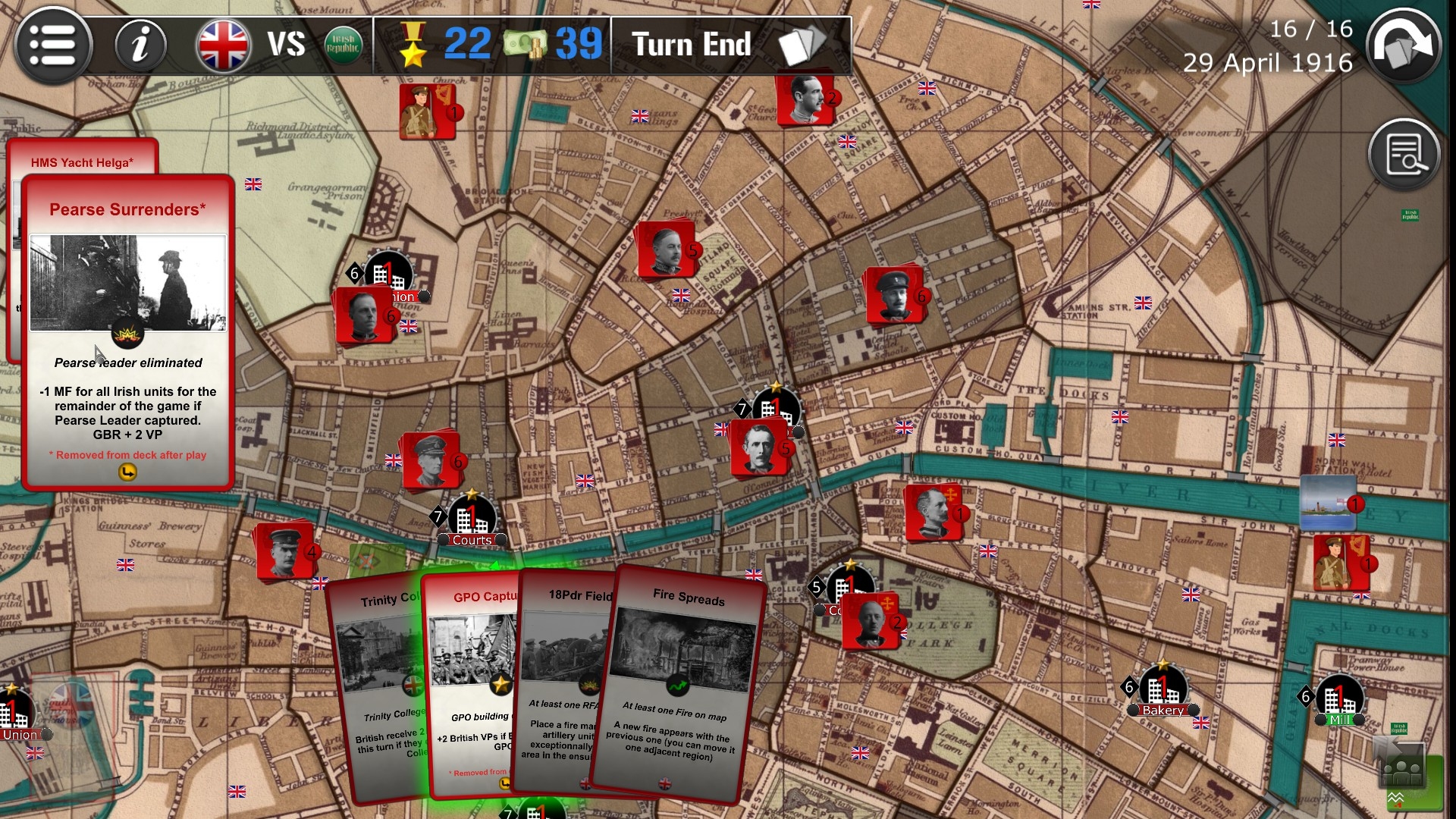 Probably not. The tacit invitations to delve deeper into the subject matter that dot the board, card deck, and counter trays, together with that bargain-basement price-tag make overlooking flaws such as the bizarre fire propagation mechanism (more on which in a moment) easy. They’re the reason I’m not going to dwell on the fact that playing as the rebels entails an awful lot of sitting tight and praying for decent dice rolls. 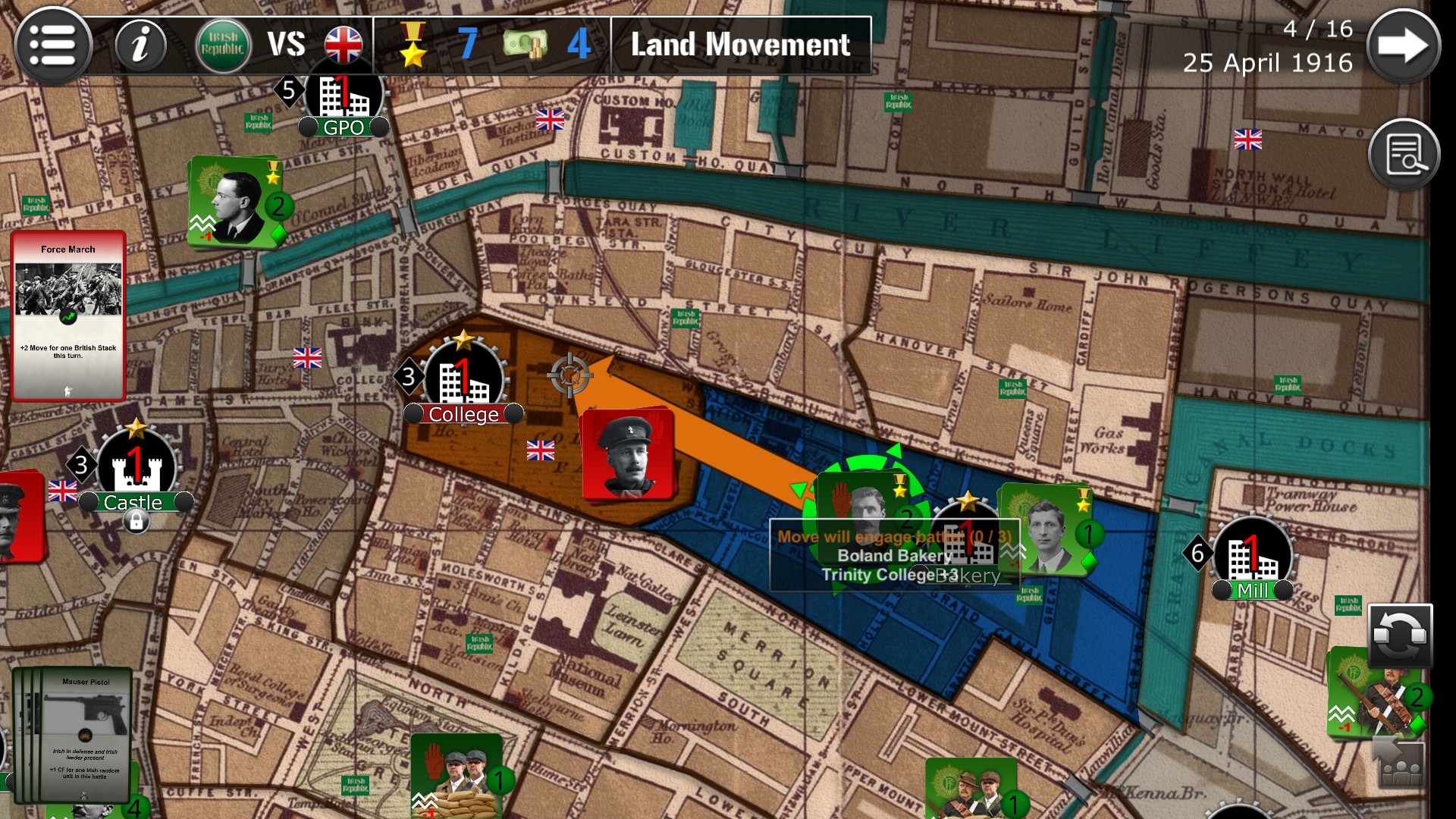 Not for the first time in a WatW add-on, the “most difficult side to play” advice in the briefing is poppycock. After suffering a narrow defeat in my first British playthrough (allegedly the tougher option) I switched sides. Gaining VPs as Patrick Pearse proved much harder. I watched and winced as my army of freedom fighters was slowly but surely taken apart by an enemy that barely put a foot wrong. Those familiar with the majority of projects on this DLC list will understand how unusual, how refreshing it is to find yourself on the receiving end of an AI-administered drubbing in WatW. 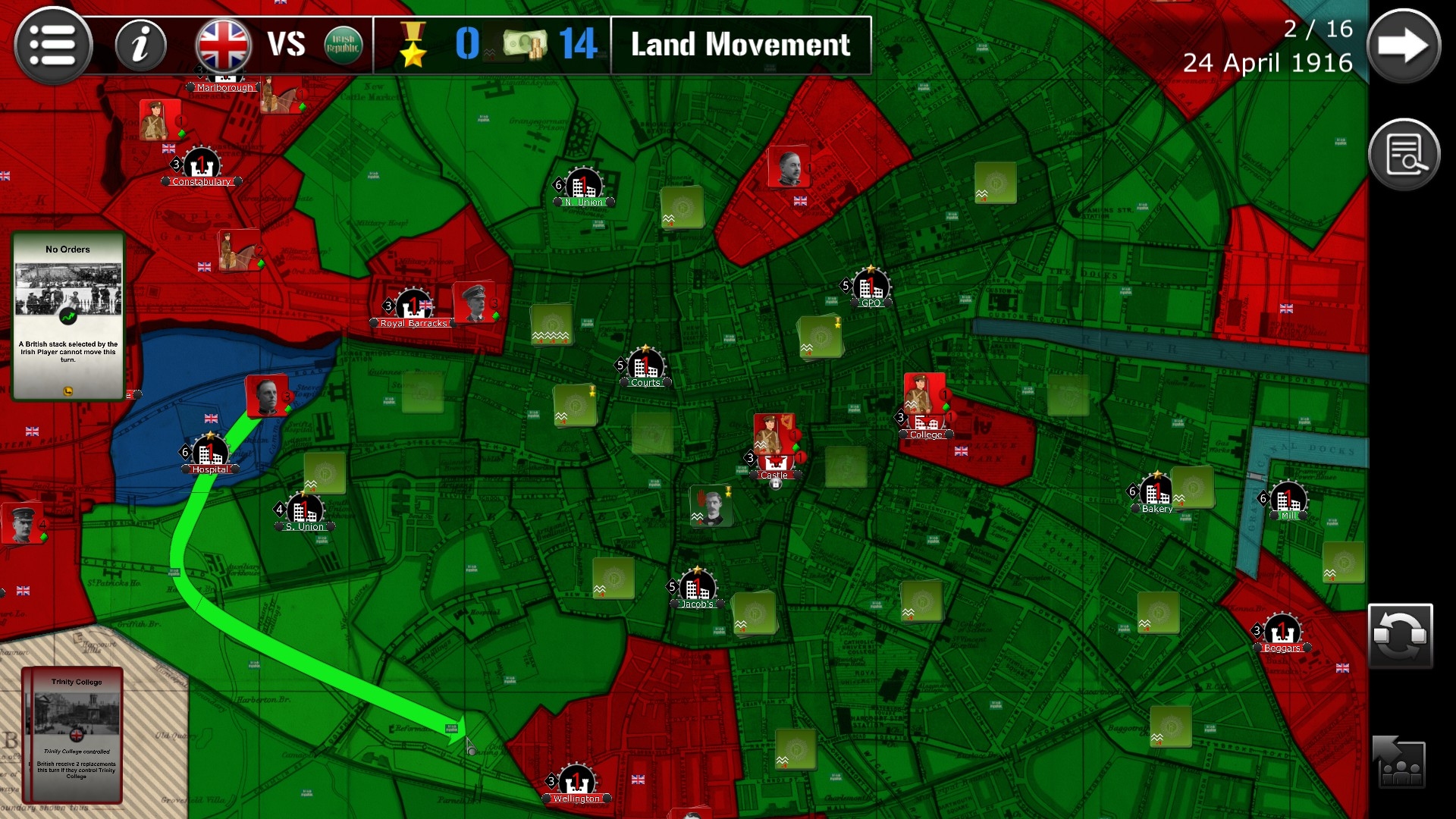 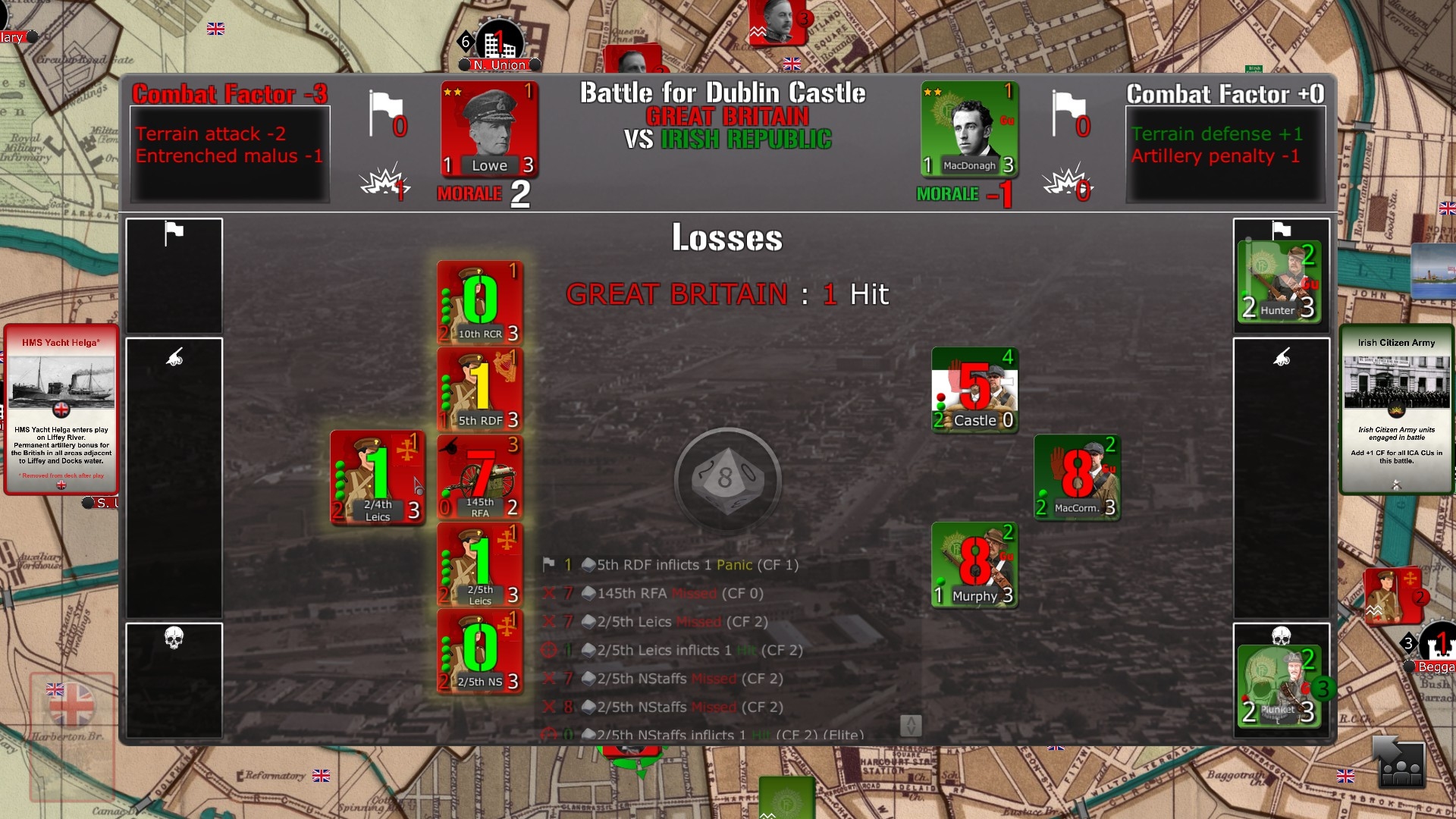 Littered with the landmarks that were the focus of so much of the fighting – the General Post Office, Dublin Castle, Four Courts… – that battlefield is one of WatW’s most compact and charismatic. In the early stages at least, the outnumbered rebels make up for what they lack in firepower with terrain advantages, higher morale, and guerrilla privileges*. As the days and nights (every third turn is a night turn) pass and British 18-pounders begin to appear on the battlefield, things get much tougher for the Irish Volunteers and Irish Citizen Army.

* Guerillas can move into occupied zones without sparking combat. 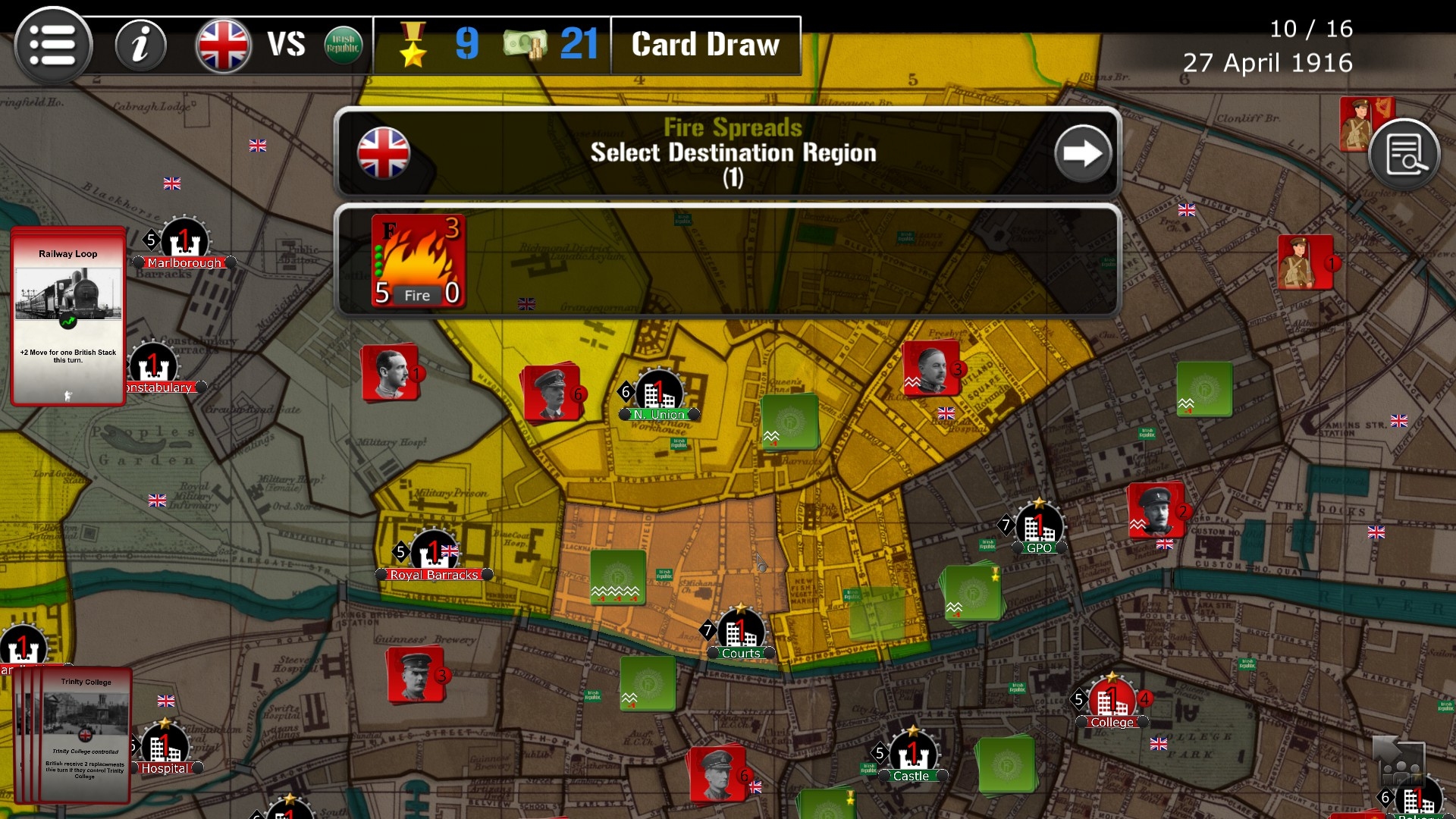 If you were creating an Easter Rising wargame from scratch there’s no way you’d sim building fires à la Dublin 1916. The blazes that in any sensible design would be the random side-effects of arty-infused engagements, are card-spawned unit tiles here, manually moved when “fire spread” cards are drawn. The bodge leads to strange scraps between men and conflagrations in which weapon cards such as ‘Lewis Guns’ confer advantages on firefighters. On one occasion I think I even managed to ‘fortify’ a friendly inferno before dispatching it to a neighbouring area. 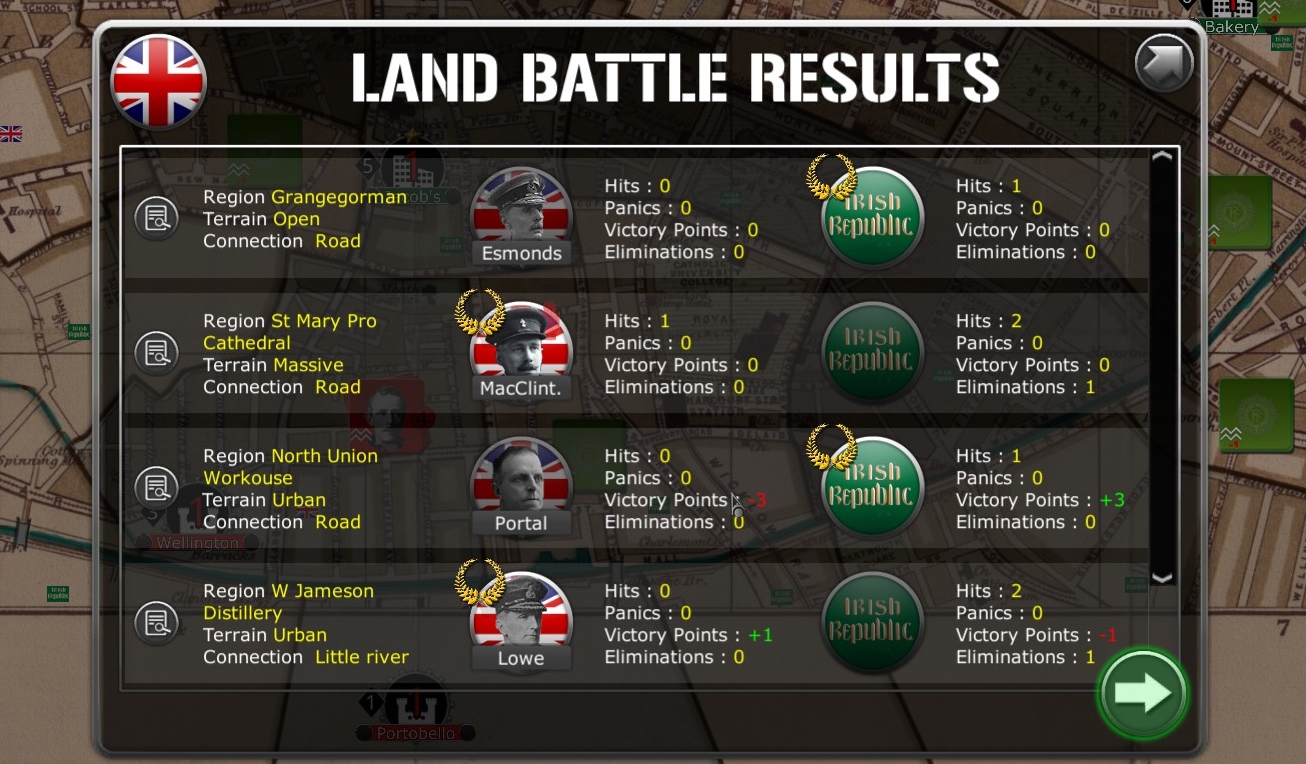 Dublin 1916’s reliance on WatW also makes it difficult for the module makers to show the unintended consequences of the Rising (More than half of the 485 people who died during the fighting were civillians accidentally slain) or to point out that any British ‘victory’ is decidedly hollow. While the rebels had their Irish critics (Unionists, Home Rulers, relatives of those serving on the Western front…) and had zero chance of prevailing in 1916, their example and sacrifice radically altered the political landscape in Ireland. After the British made martyrs of the Easter Rising’s leaders, and later shot themselves in the other foot by threatening to introduce conscription, republicanism flourished. 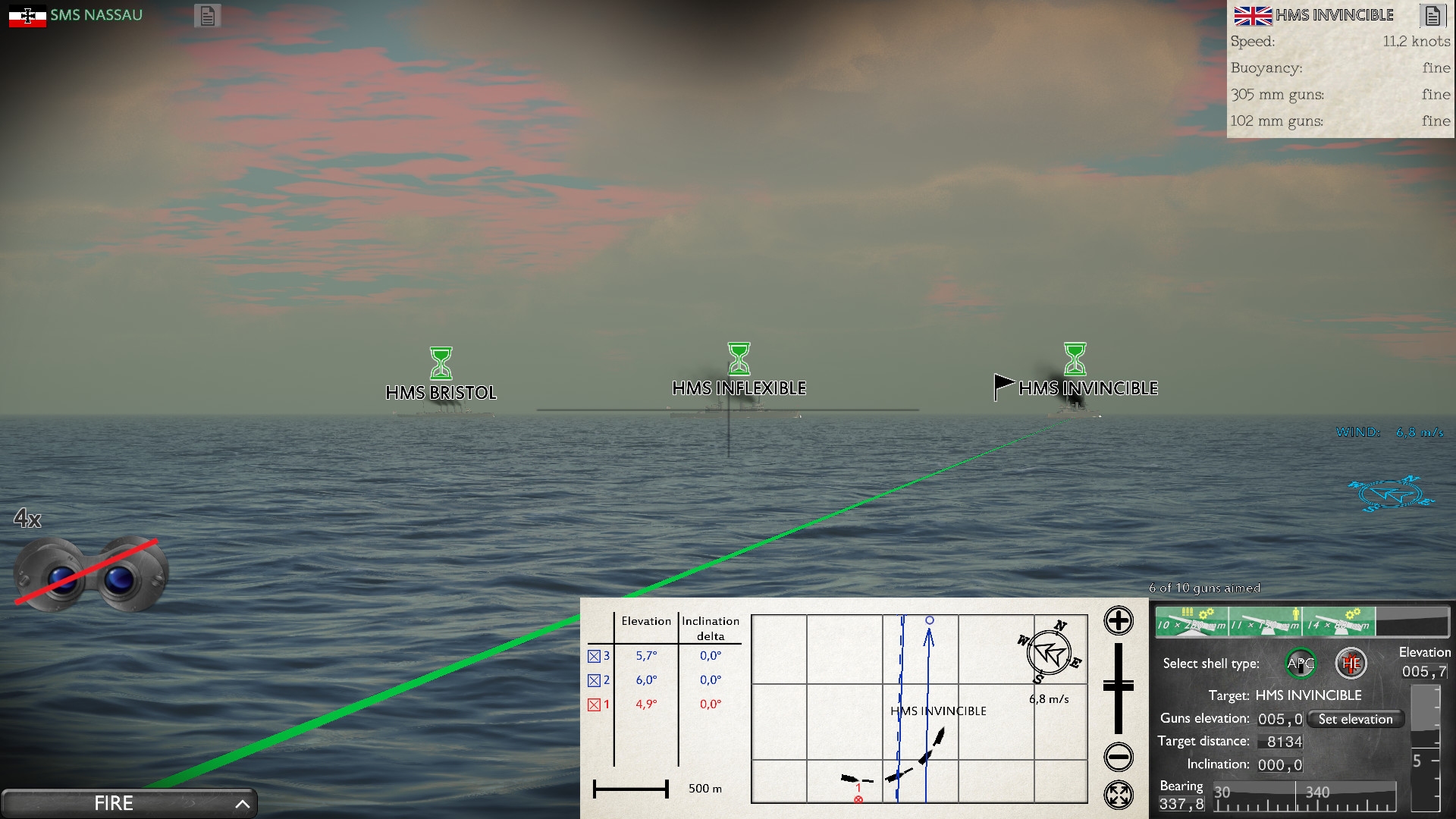 Of the upcoming titles left out of last week’s feature, few have better reason to feel aggrieved than Naval Hurricane. 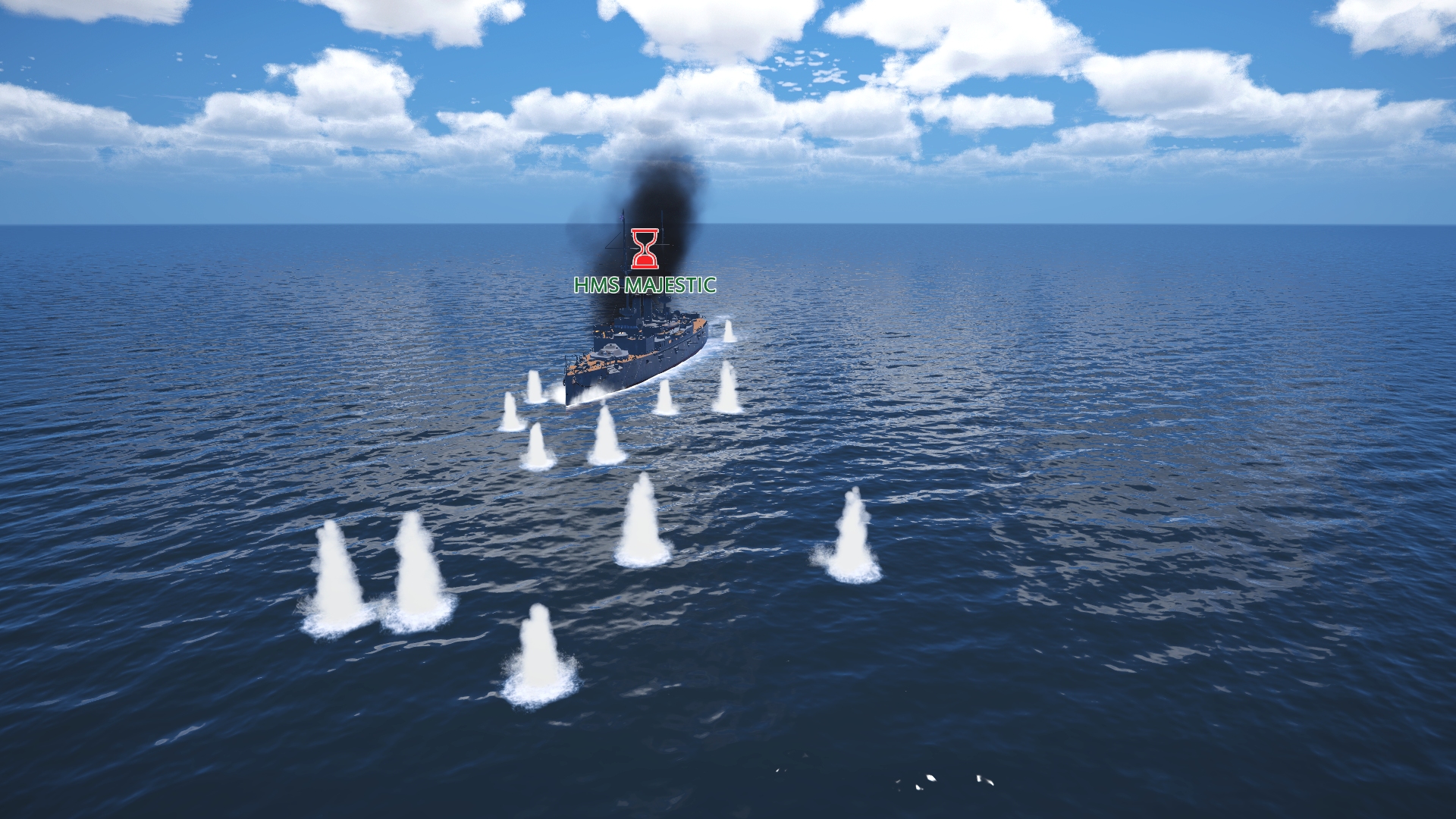 Although Ivan Mostyaev’s naval WIP shares a timeframe with Ultimate Admiral: Dreadnoughts, Killerfish’s Atlantic Fleet is the title it most closely resembles. The out-of-date but impressive alpha lets curious armchair admirals play a selection of canned and customisable WWI scraps, glimpsing in the process ballistics and damage modelling of rare quality. 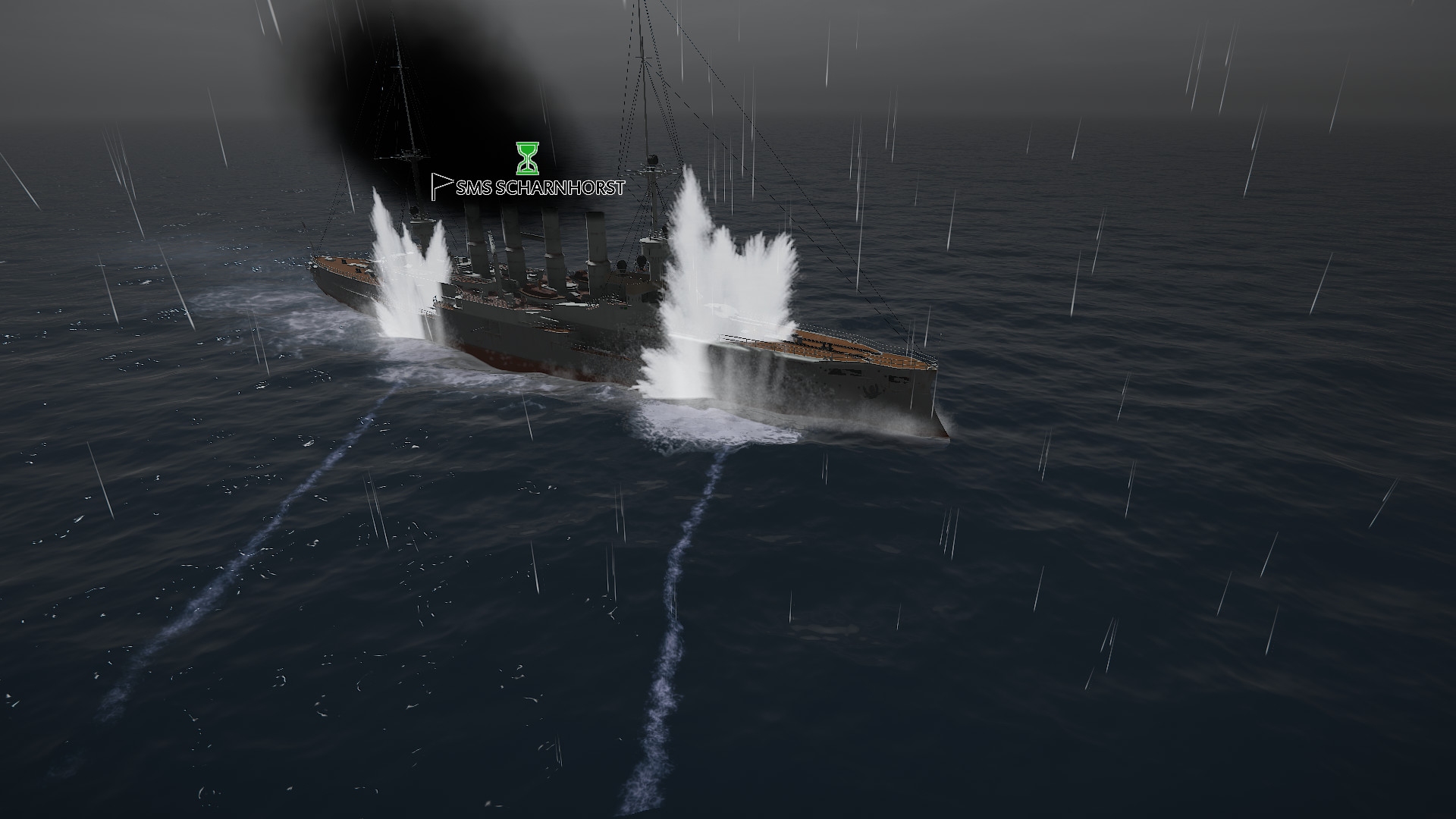 Navies and warships are extremely polite in IGOUGO NH. The player works through their fleet vessel by vessel, determining heading and speed, organising damage control, and finally aiming and firing weaponry, then the AI does the same. You can fully automate damage control, and delegate gunlaying, but do this and you miss out on some satisfying moments. 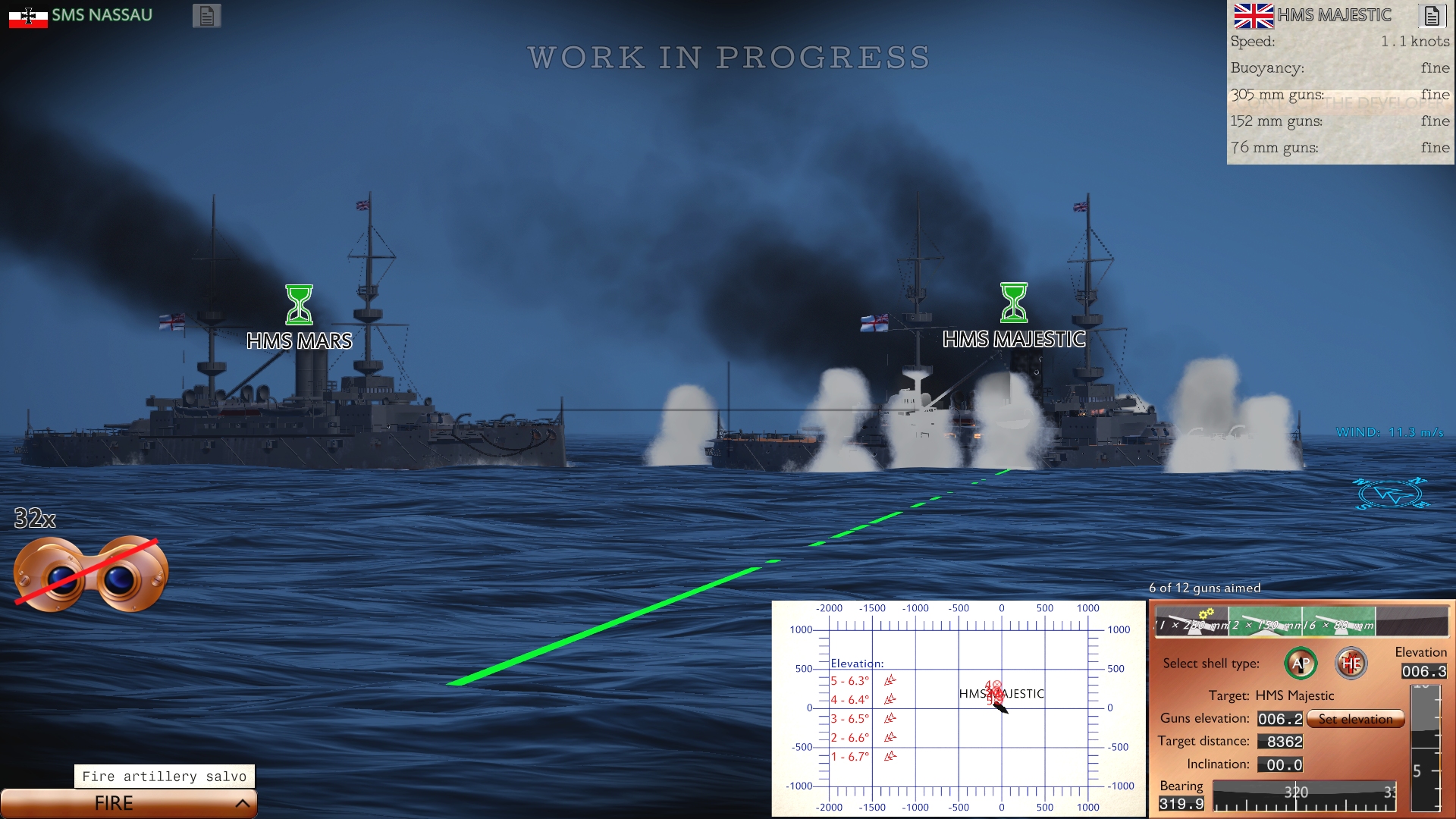 The small white chart right of centre in the above screenshot is NH’s version of AF’s tac map splash history – a fall of shot record showing where previous volleys landed. By studying this then manually tweaking guns, often better results can be achieved than with automatic fire solutions alone. Certainly, scoring a hit with a gut instinct, post-analysis volley warms the cockles more effectively than doing so with prescribed elevation and bearing settings. 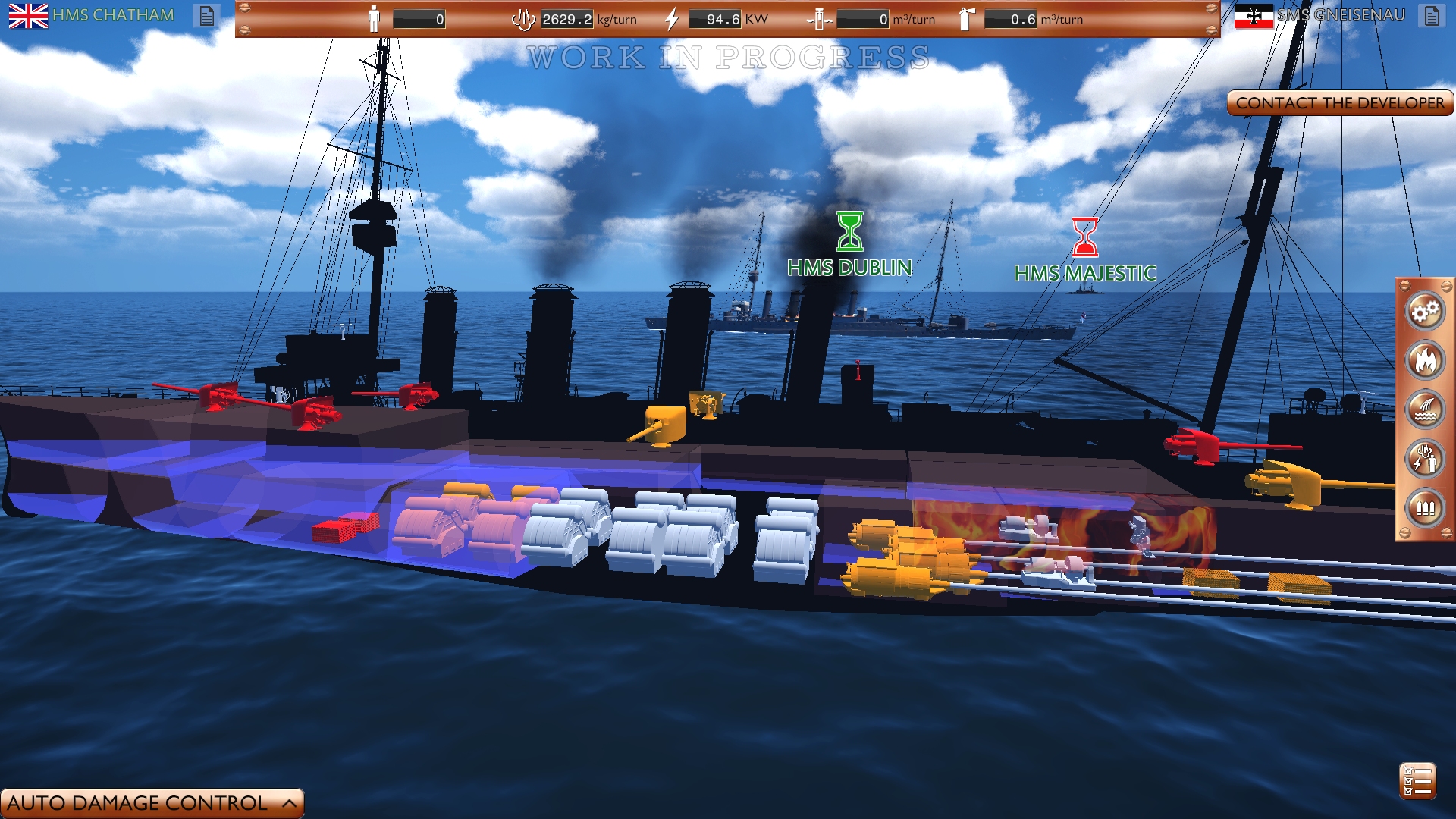 It’s only when your floating fortresses begin taking hits that Ivan’s splendidly pedantic destruction modelling is revealed. Wounded ships get an additional turn phase – damage control – during which their vital organs are visible and colour-coded according to condition, and crews can be ordered to prioritise particular problems. A vessel’s ability to fight fires and deal with flooding is, of course, influenced by the number of healthy, unoccupied tars it has at its disposal, but other less obvious factors such as electricity and steam supply also have an impact. Remedial work in a space where lighting is unavailable due to a knackered generator or extensive flooding, will proceed more slowly than in an illuminated one. Steam-reliant static pumps (mobile apparatus is also modelled) are bugger-all use if the ship’s boilers are out of commission. I’m struggling to think of a rival that sims the desperate survival struggles and slow demises of briny behemoths this forensically. 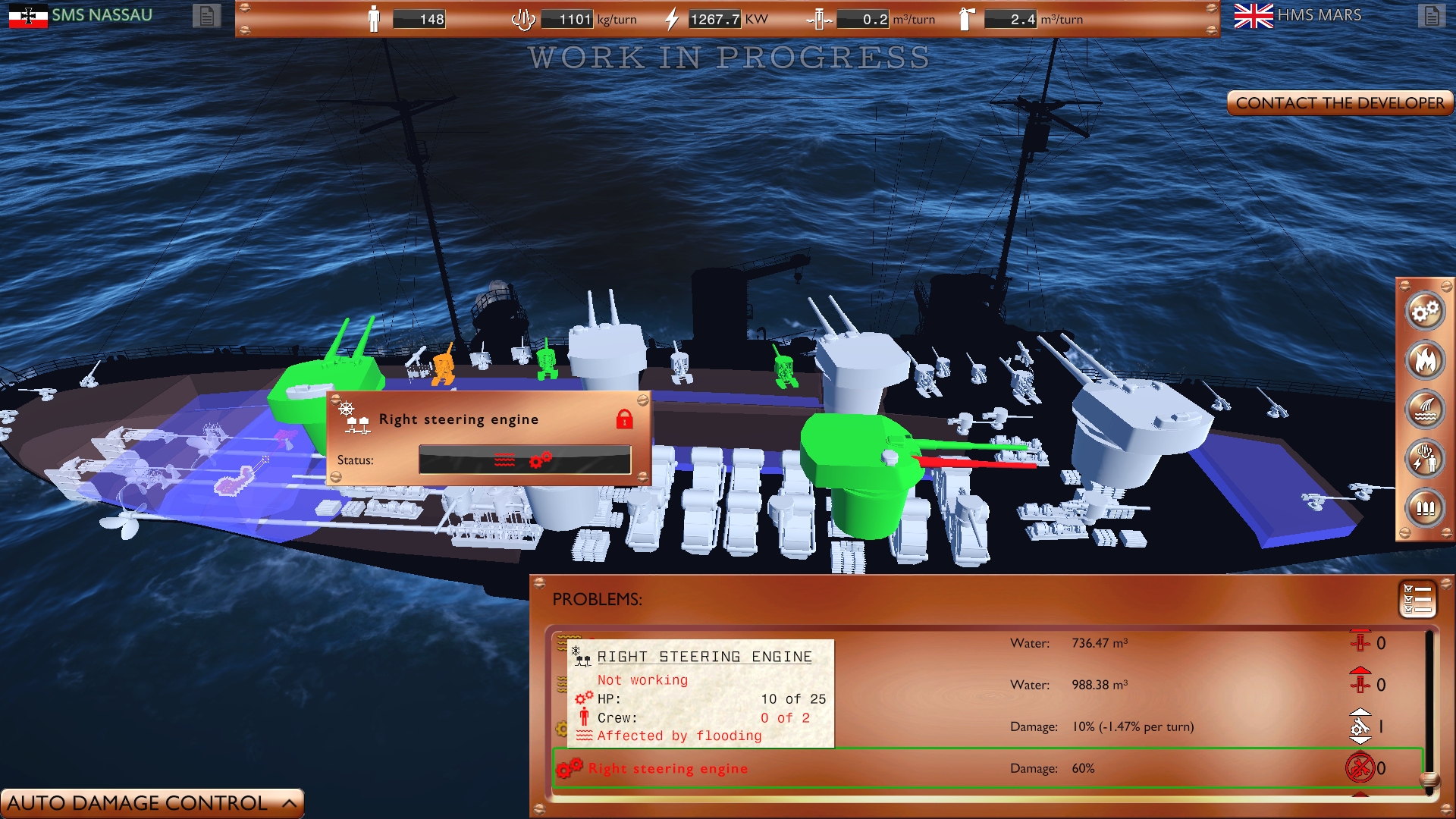 I like what I’ve seen of the AI and look forward to finding out how the presumably-AF-inspired “global map campaign” works. The only thing that slightly worries me about NH at present is its pace. In the alpha a skirmish involving half a dozen ships can take me over two hours to complete. Unless Ivan has some natty automation aids up his sleeve, fighting a Jutland-scale engagement with this engine could take weeks.