It looks like I need to add another entry to the THC Wargames Top 50. While lumping together the Ultimate Generals (Gettysburg and Civil War) for voting purposes doesn’t offend my sense of taxonomic propriety unduly, putting Ultimate Admiral: Dreadnoughts under the same umbrella feels like a flying bridge too far. Just about all UAD has in common with its landlubbing predecessors is good looks, decent AI, and an intuitive UI. In terms of theme, features, and approach, its natural hammockfellow is the series currently ranked at #10, Rule the Waves. 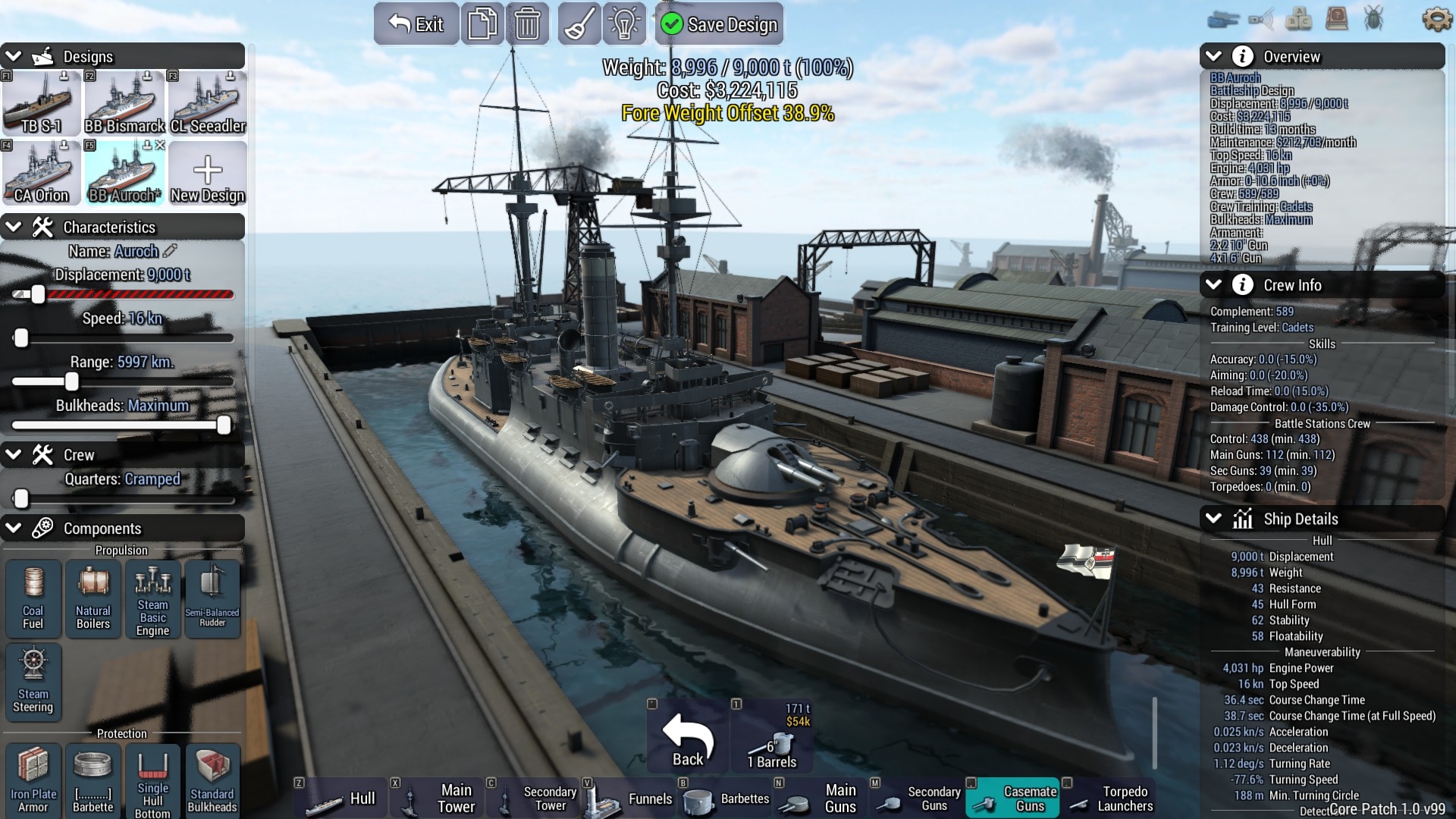 If you’re a Rule the Waves fan or have a strong dislike of coattail riders, expect to embark on Early Access Ultimate Admiral: Dreadnoughts with mixed emotions. The newcomer’s elevator pitch – pauseable late 19th/early 20th Century naval scraps spliced with ship design, and unscripted turnbased campaigning – is too similar to have been conceived by someone completely unaware of RTW. 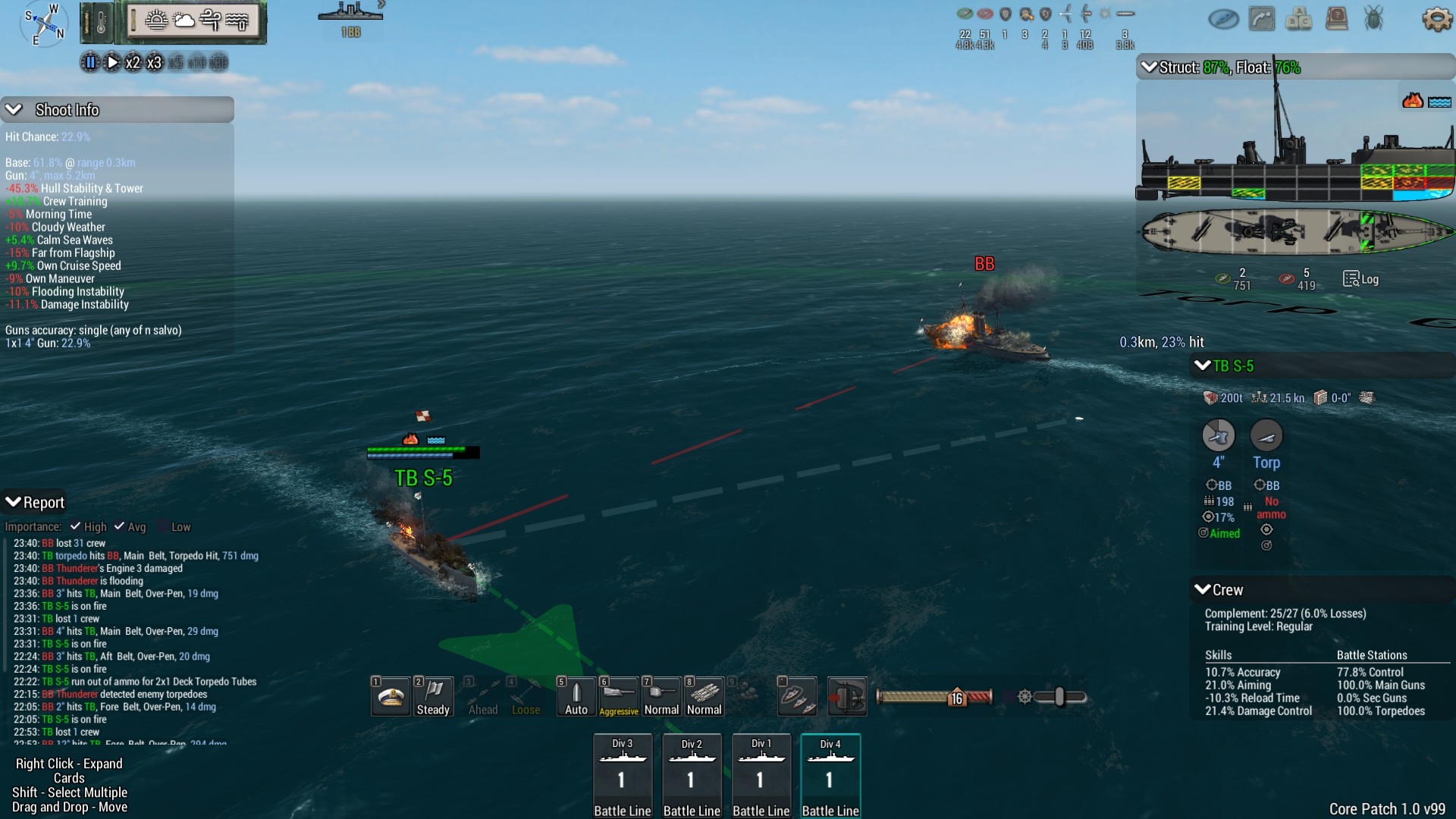 How long any censorious coolness lasts will depend on the extent of your disapproval and your weakness for fine naval wargames. Personally, I managed to remain sniffy for about sixty minutes. By the end of hour one, having designed my first warship, orchestrated my first torpedo boat attack, and slain my first cruiser, my qualms had mysteriously vanished. Engrossed and impressed, I was having too much fun to tut or hand-wring. 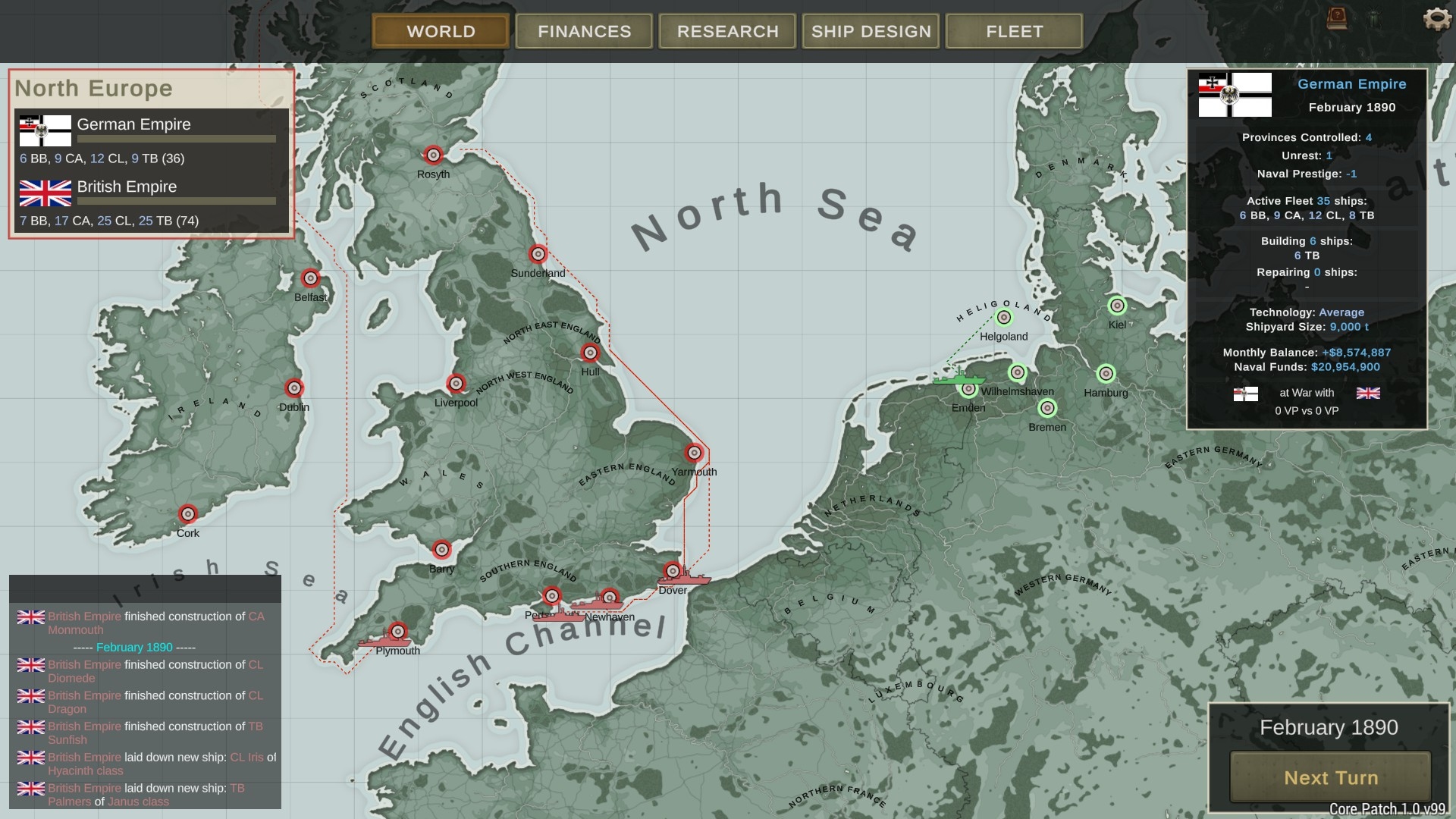 UAD’s Early Access release has been a long time coming. The three years of hard work Game-Labs put in prior to this month’s Steam slipway ceremony shows in the depth of the simulation, the degree of polish, and the amount of content your 25 smackers purchases. 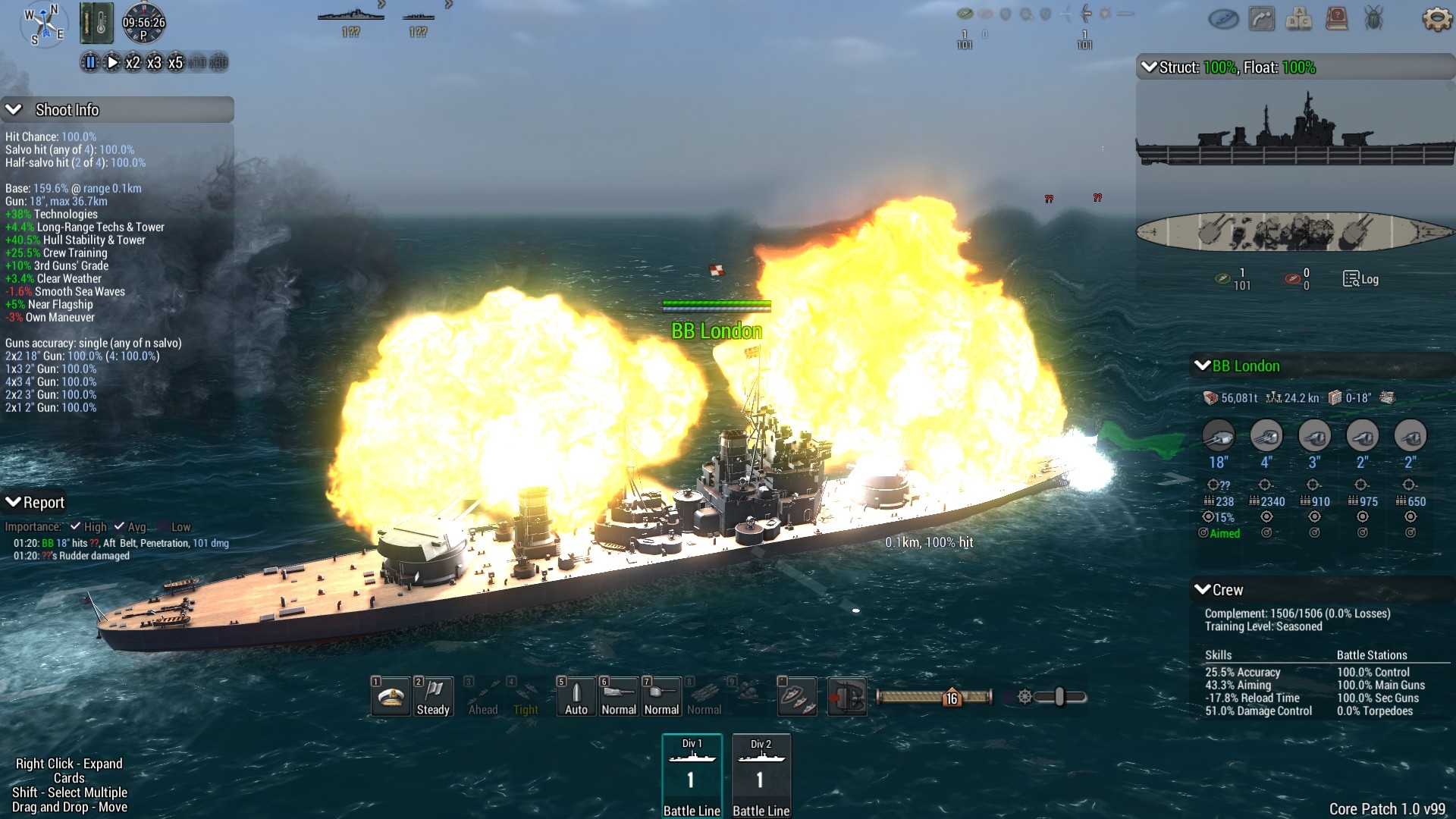 I knew my screenshot key would see a fair bit of action this week – what I hadn’t fully anticipated was that the shell exchanges and dreadnought demises that cried out for capture would feel so realistic. Wisely, Nick Thomadis and chums have resisted playing to the gallery. UAD might look and handle like a chart-topping RTS, but beneath the game’s stout belt armour lurks the soul and science of a serious wargame. 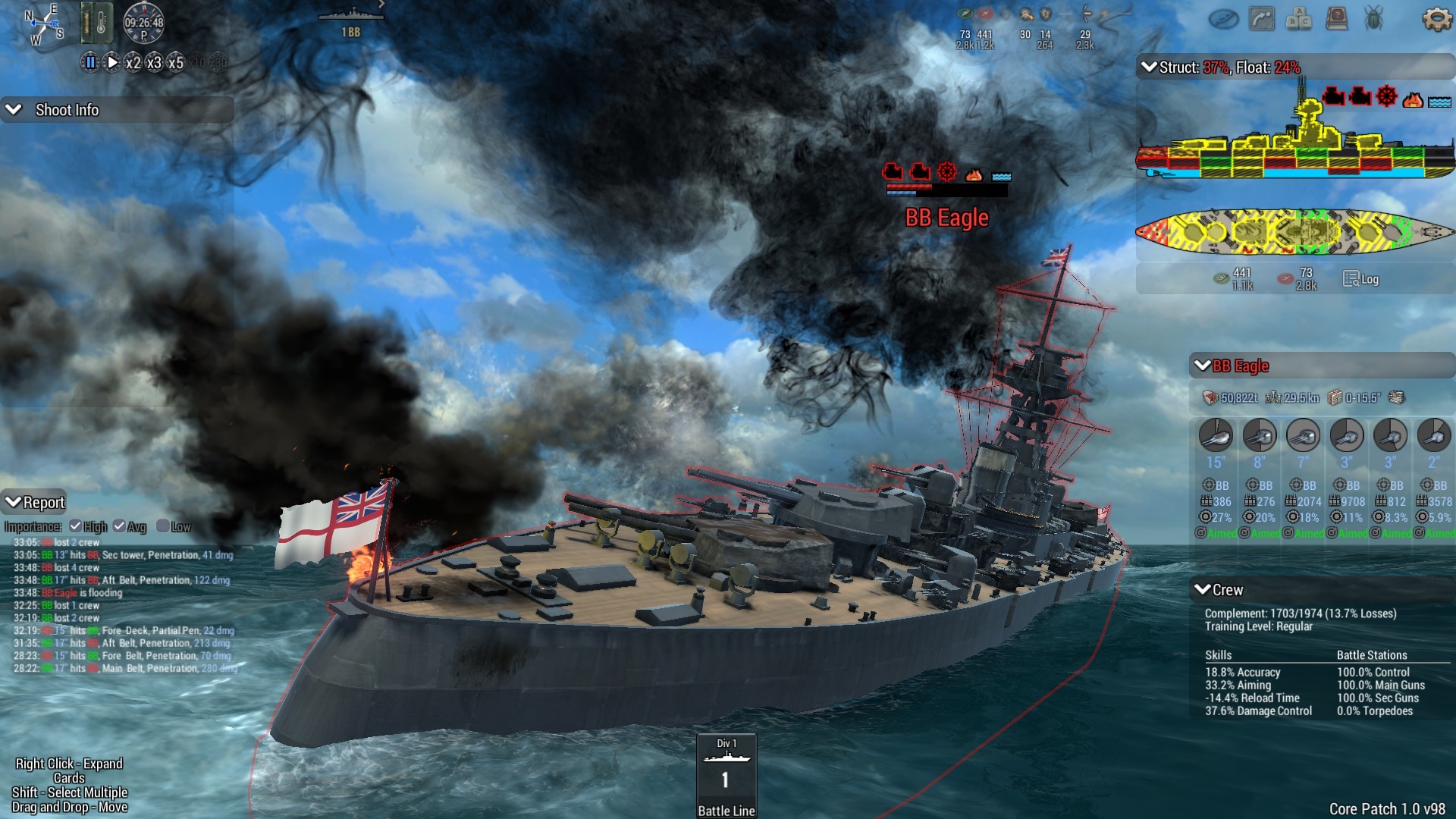 Assuming you’ve got the ‘Damage’, ‘Report’ and ‘Shoot Info’ GUI panels open during a clash, that science is flaunted every time a gun expectorates*, or a speeding shell or torpedo ploughs headlong into something ferrous.

*Actually it’s evident before that. Spotting, including misidentification, is nicely simmed. 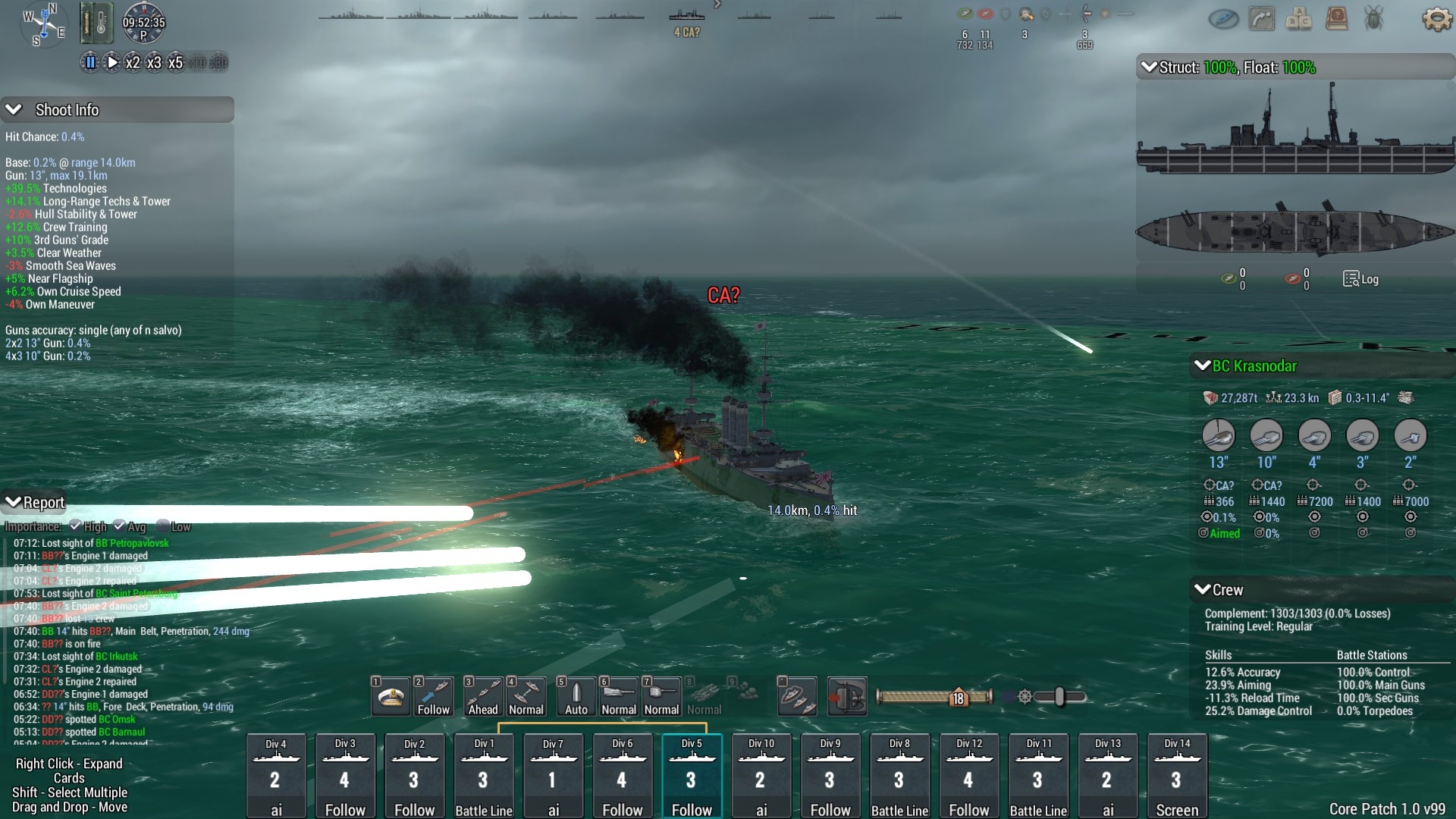 To determine what happens when the projectile lands, munition weight, velocity, and impact angle, along with armour thickness and quality are fed into a version of… 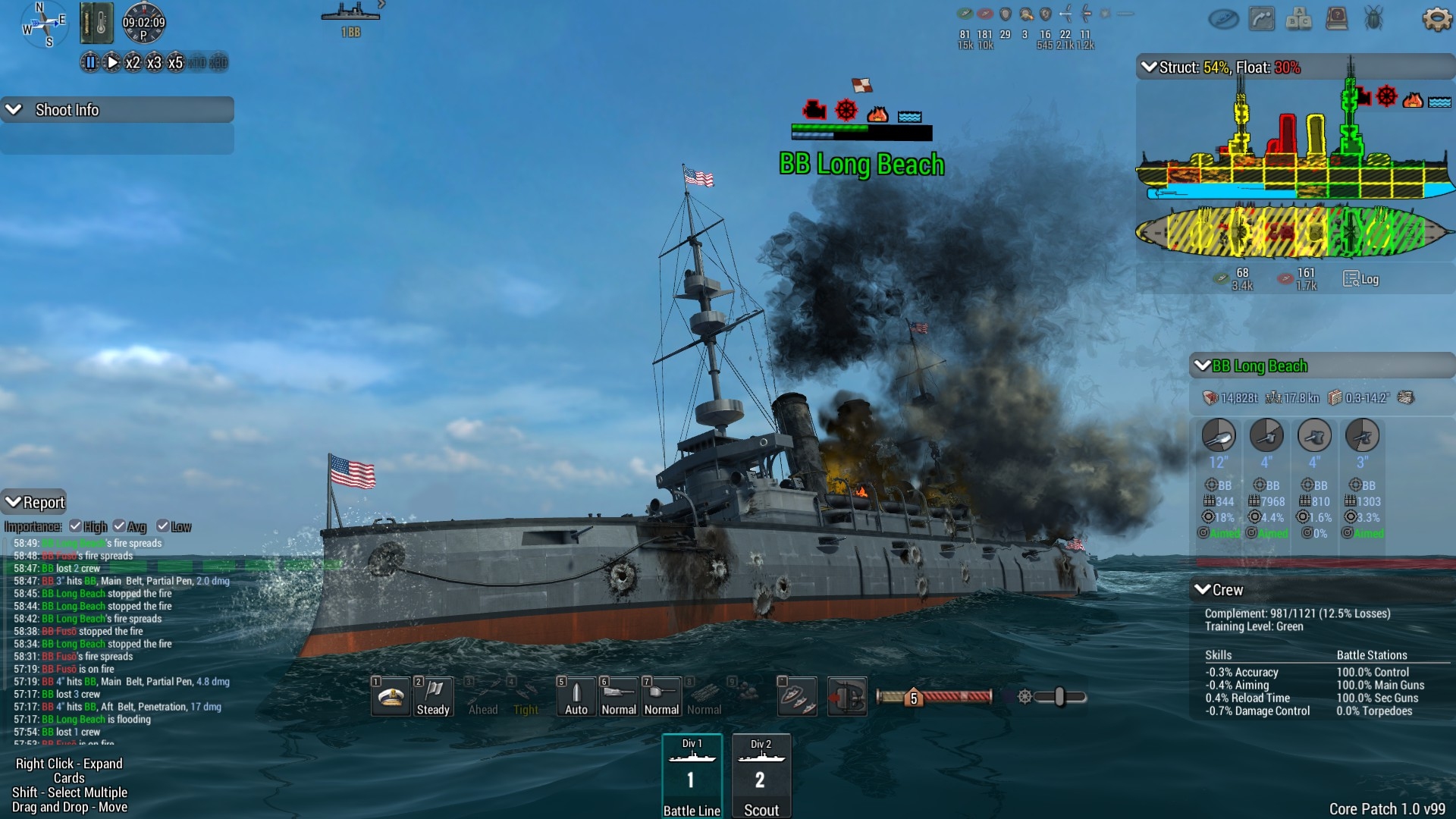 Devoid of cover and contours, the best naval wargames have always relied heavily on intricate damage models for tactical texture. Game-Labs seems to grasp this. While UAD doesn’t let you manage damage control or examine warships GHPC-style postbellum, there’s enough detail and dynamism to destruction to ensure the colour-coded damage diagrams in the top-right of the screen get frequent glances. At times those diagrams showing as they do invisible repair teams battling to contain spreading fires, plug holes in colandered hulls, and pump out flooded compartments, are just as compelling as the 3D spectacles unfolding centre stage. Do the unseen catastrophe averters with their fire hoses and wooden wedges sometimes feel too efficient? Yes, but overall I think the devs get ship survivability about right. Anyone who knows their naval history will note the way some vessels take incredible punishment and, because of the timing and distribution of that punishment, endure, while others less fortunate perish with Indefatigable-like suddenness, and nod approvingly. 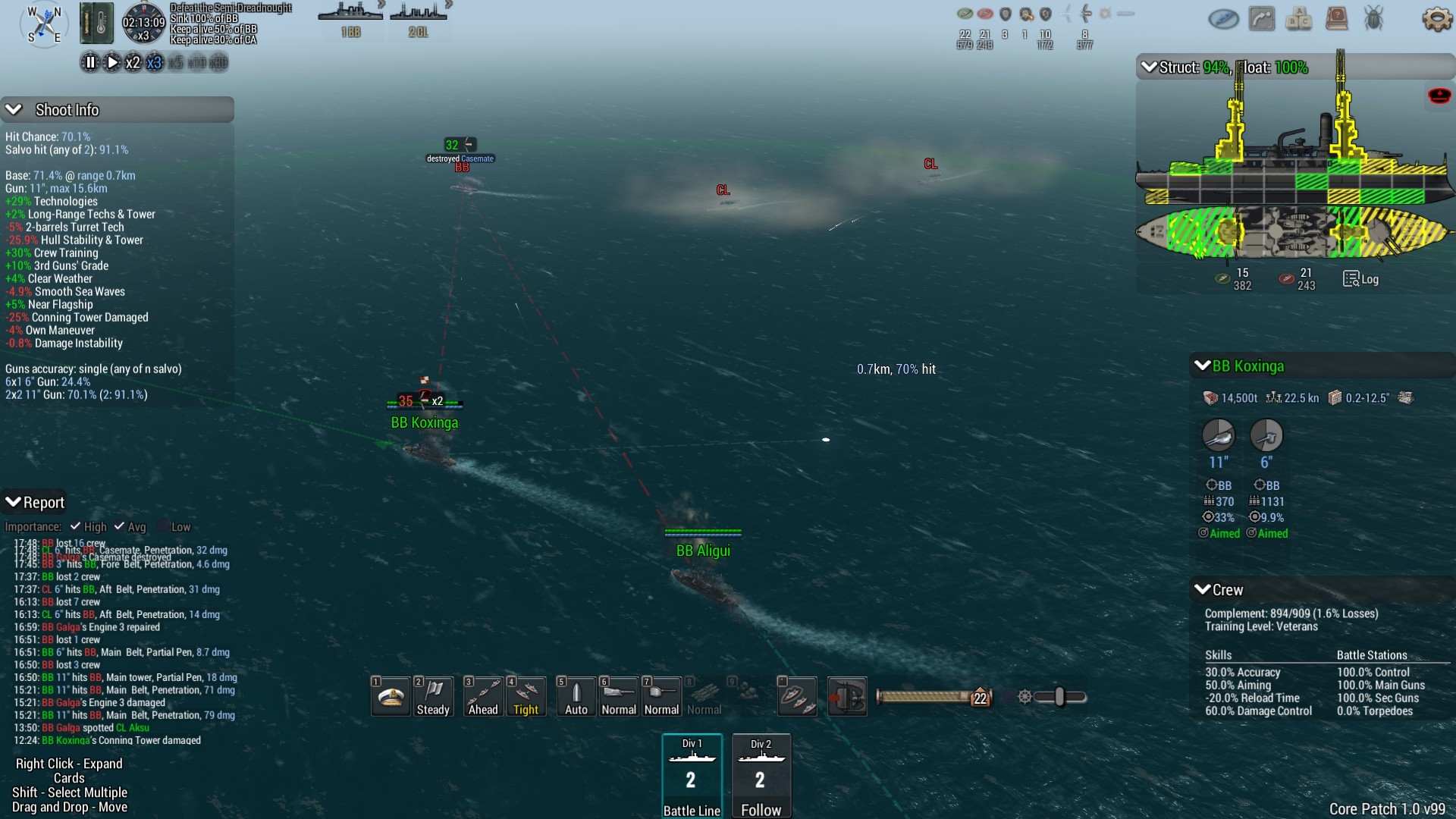 Although my enthusiasm for the AI has been slightly dented by collisions I’ve witnessed during recent random skirmishes, overall I remain impressed by the way silicon bridge pacers handle their fleets. More often than not ersatz Jellicos, Scheers, and Tōgōs use assets appropriately. Destroyers generally scout, screen, and harry, while cruisers and battleships attempt to pummel from afar. Particularly pleasing is the way foes employ torpedo boats. Heaven help the admiral who allows enemy TBs to infiltrate his flock. 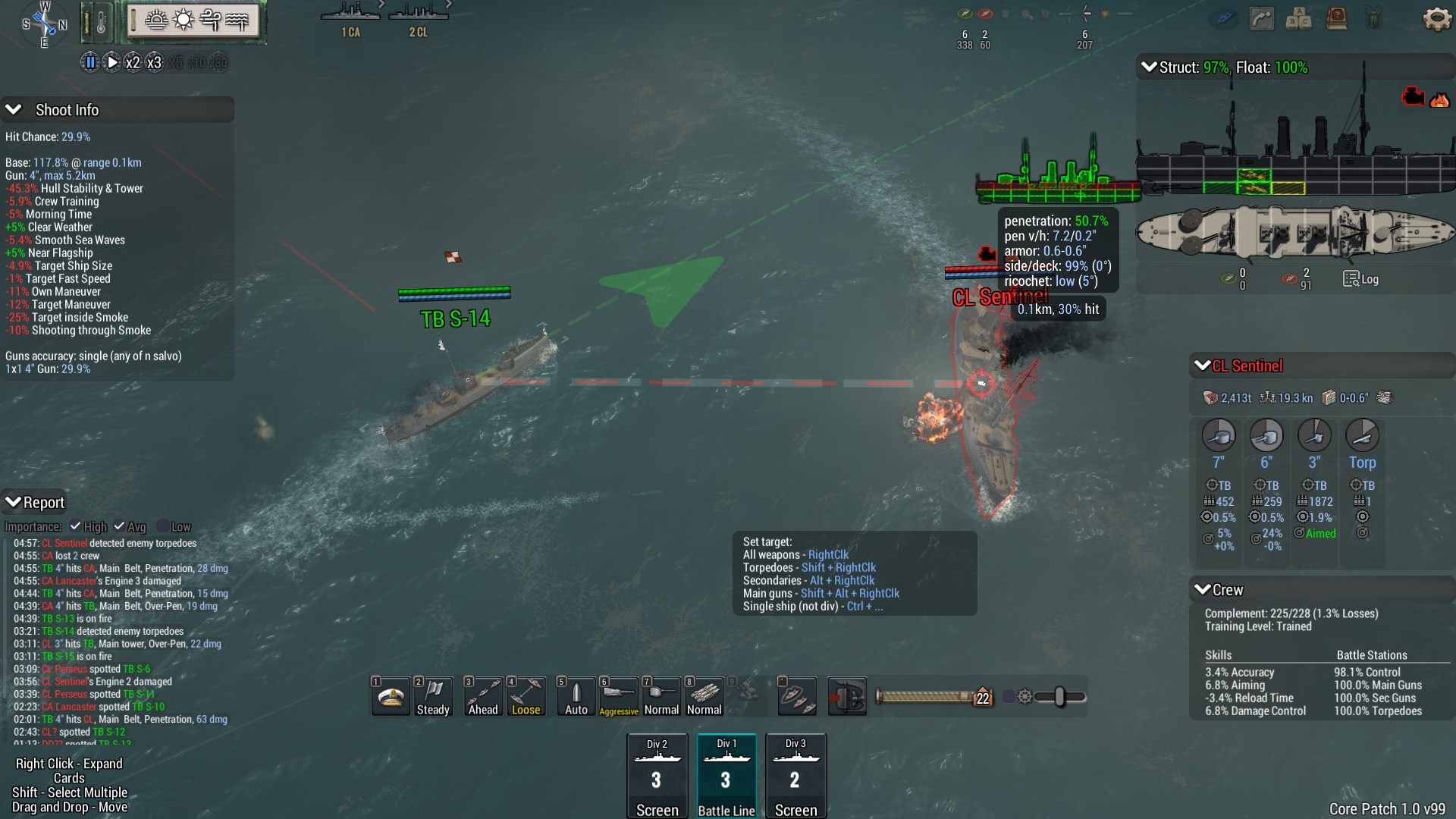 Rarely is it necessary to issue manual targeting instructions. Not only are individual captains competent risk assessors, they understand that sometimes it’s sage to engage multiple targets simultaneously rather than concentrate fire. A small selection of role assignment and behaviour modifier buttons together with the ability to hand over ships entirely to a friendly AI should allow the micro-management averse to orchestrate large ding-dongs without swooning. 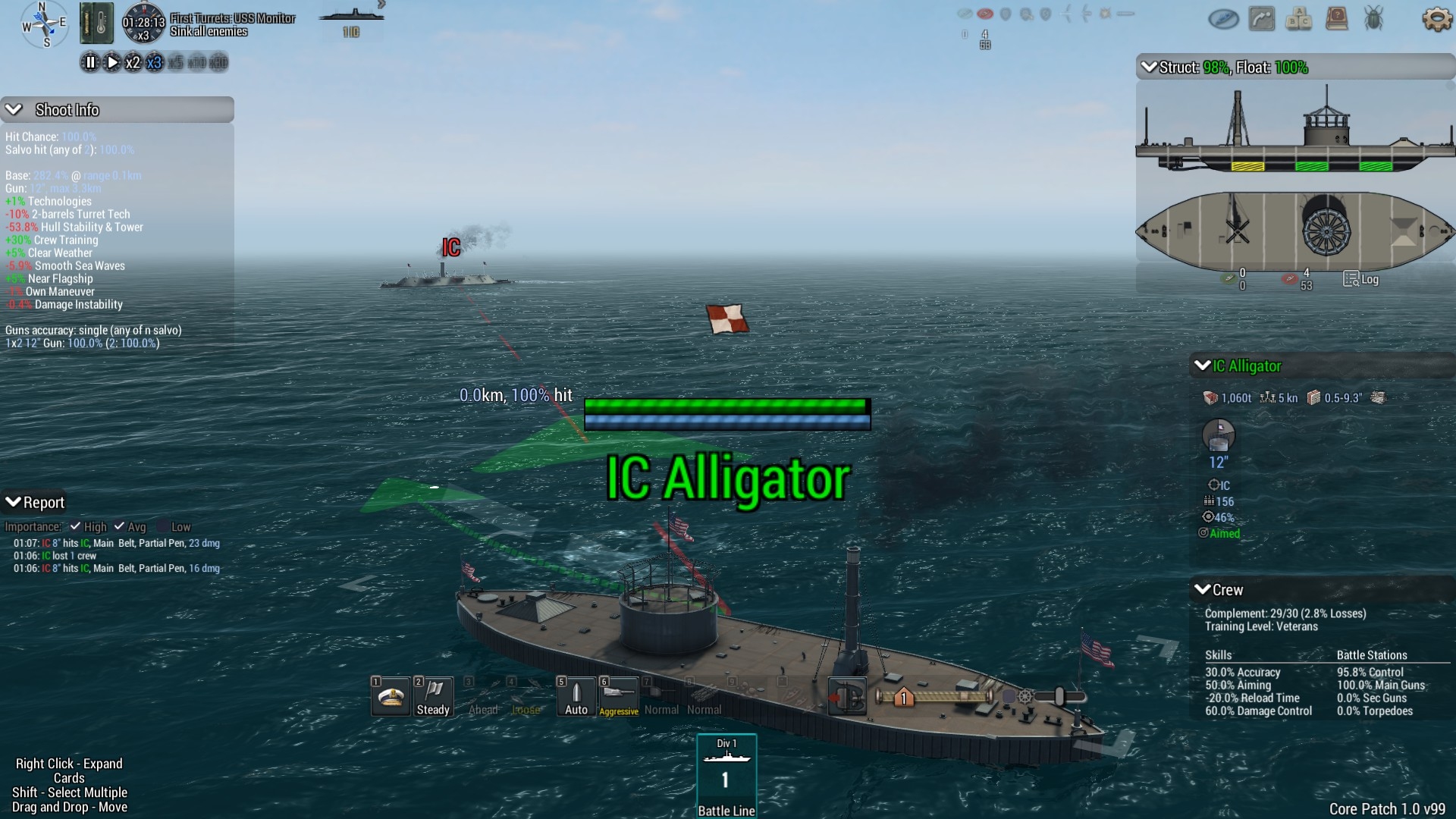 There are three ways to play at the moment: campaigning, customisable skirmishes, and the Naval Academy. Only in the latter mode is ship design mandatory. Elsewhere the computer will shipwright on your behalf if asked. 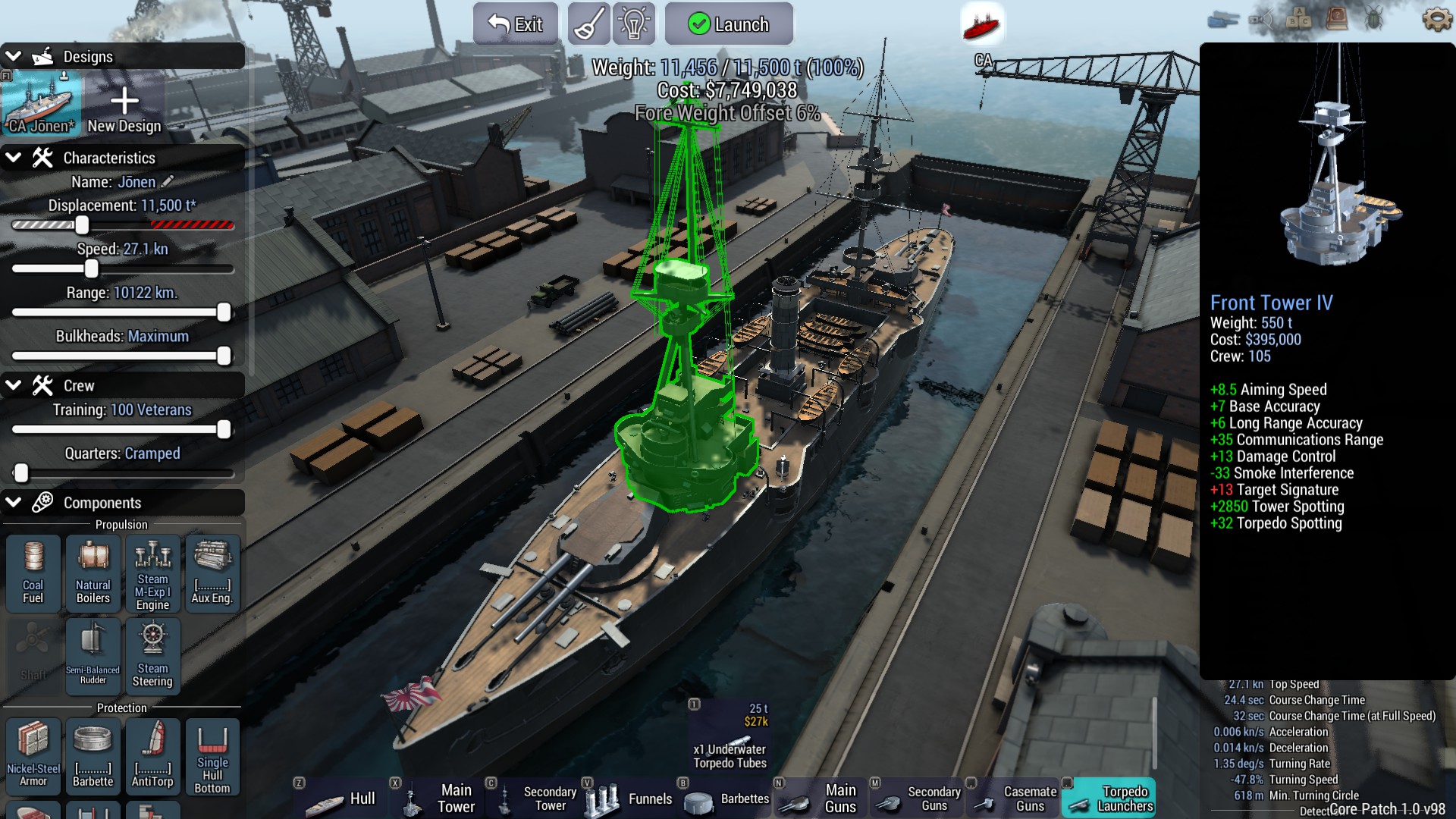 I suspect some may find UAD’s shipyards a little restrictive. Although you’re free to tinker with weaponry, armour thicknesses, funnels, towers and the like, sculpting hulls, reshaping decks, and meddling with internal configuration isn’t permitted. The advantage of the template approach is speed. Pretty soon you’ll be blueprinting new BBs in the time it takes to boil a kettle. 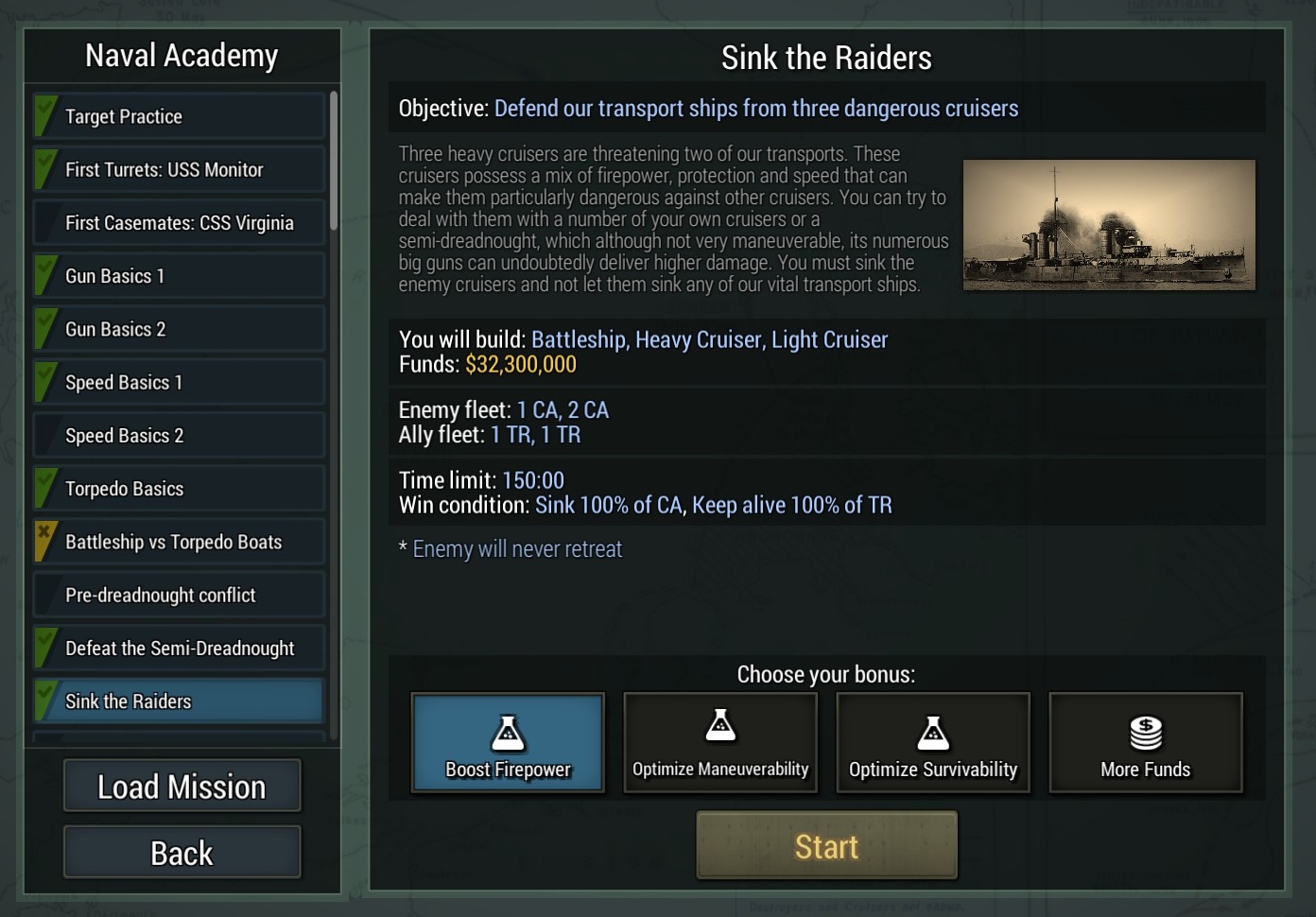 Thankfully, the vast majority of the 56* Naval Academy missions are Sprocket-style design/tactical challenges rather than traditional tutorials. You’re presented with a situation and a budget and expected to fashion a vessel or flotilla that will get the job done. Solving tough puzzles such as “Armed Convoy Attack” and “Battlecruiser vs. Dreadnought” is perfect prep for campaigning and large custom engagements. 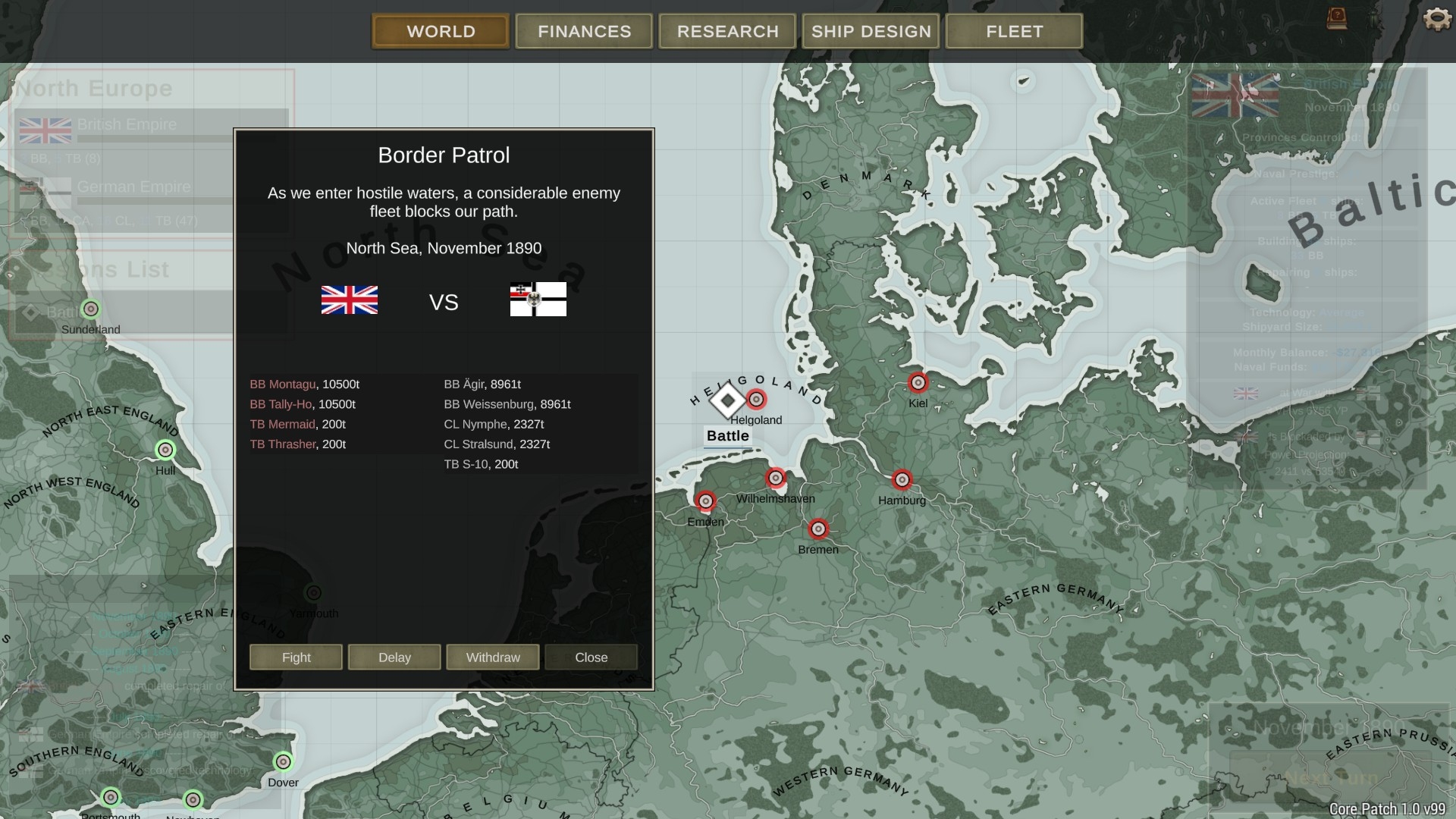 The most immature and poorly documented element of the game at present, the WIP campaign is politics-free (you start at war), exclusively Anglo-German, limited to an 1890 start date, and played on a fairly small and irrelevant North European map, at the moment. Despite these shortcomings, and the fact that you don’t plan distinct operations (battles are the randomly generated result of relative fleet sizes, compositions, and dispositions) I was quickly drawn in.

Essentially you’re thrown straight into a ‘hot’ naval arms race with either Britannia or Germania. Fall behind and friendly freighter losses mount and the abstracted blockade that will eventually bring your country to its knees tightens. Naturally there’s a research tree and a few financial levers at your disposal, and you can automate or attempt to flee from lopsided clashes.

By the end of next year campaigning should feel very different. A globe-encompassing map that allows US, Japanese, Russian, Austro-Hungarian, French, Italian, Spanish and Chinese navies to cross swords is on the stocks. 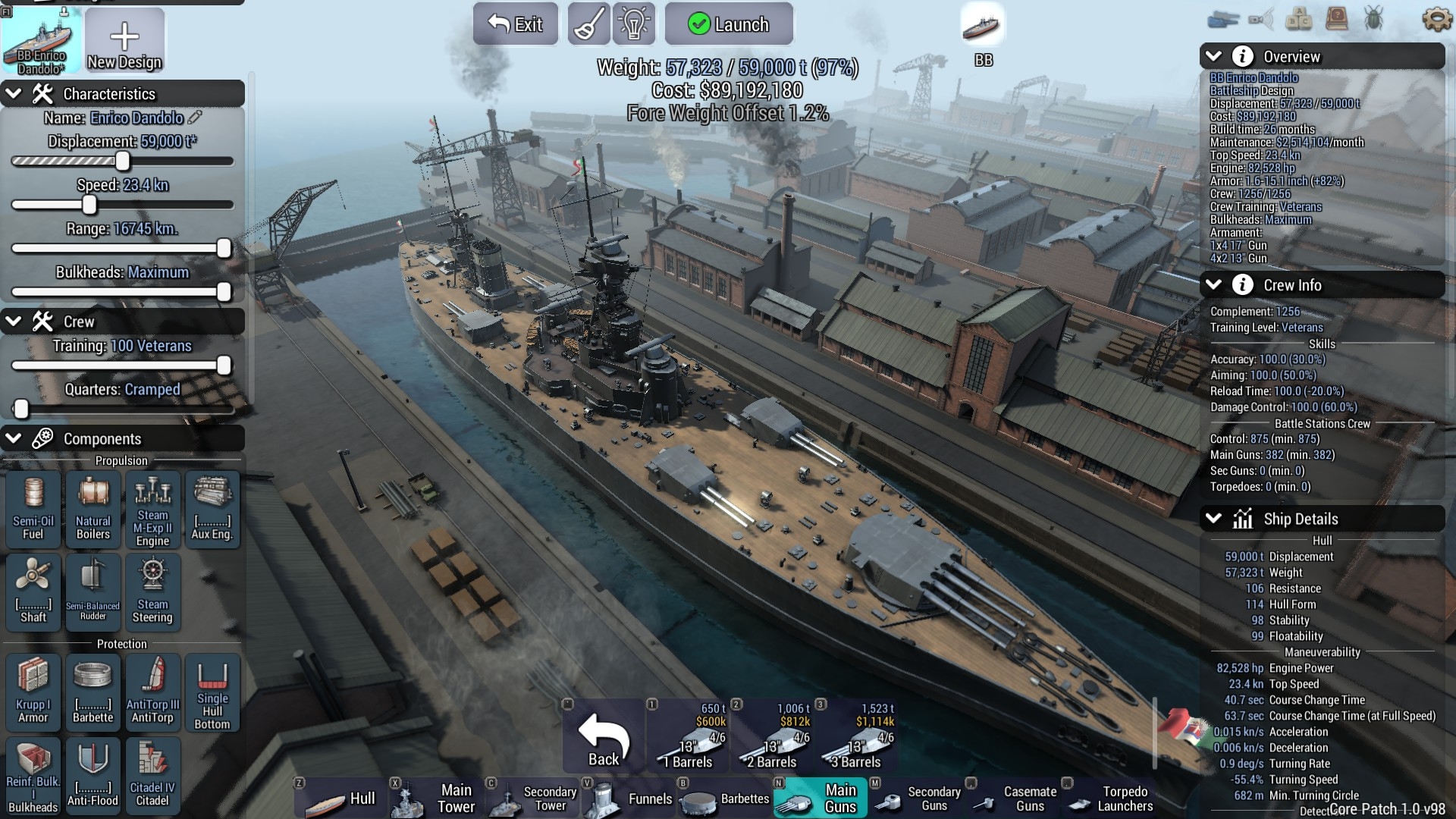 Unless Game-Labs changes its plans dramatically, UAD’s 3D spectaculars will never involve U-boats, flat tops, or aircraft. Although a submarine branch on the R&D tree suggests it will be possible to purchase periscoped prowlers at some point, I suspect their contribution will be purely statistical. 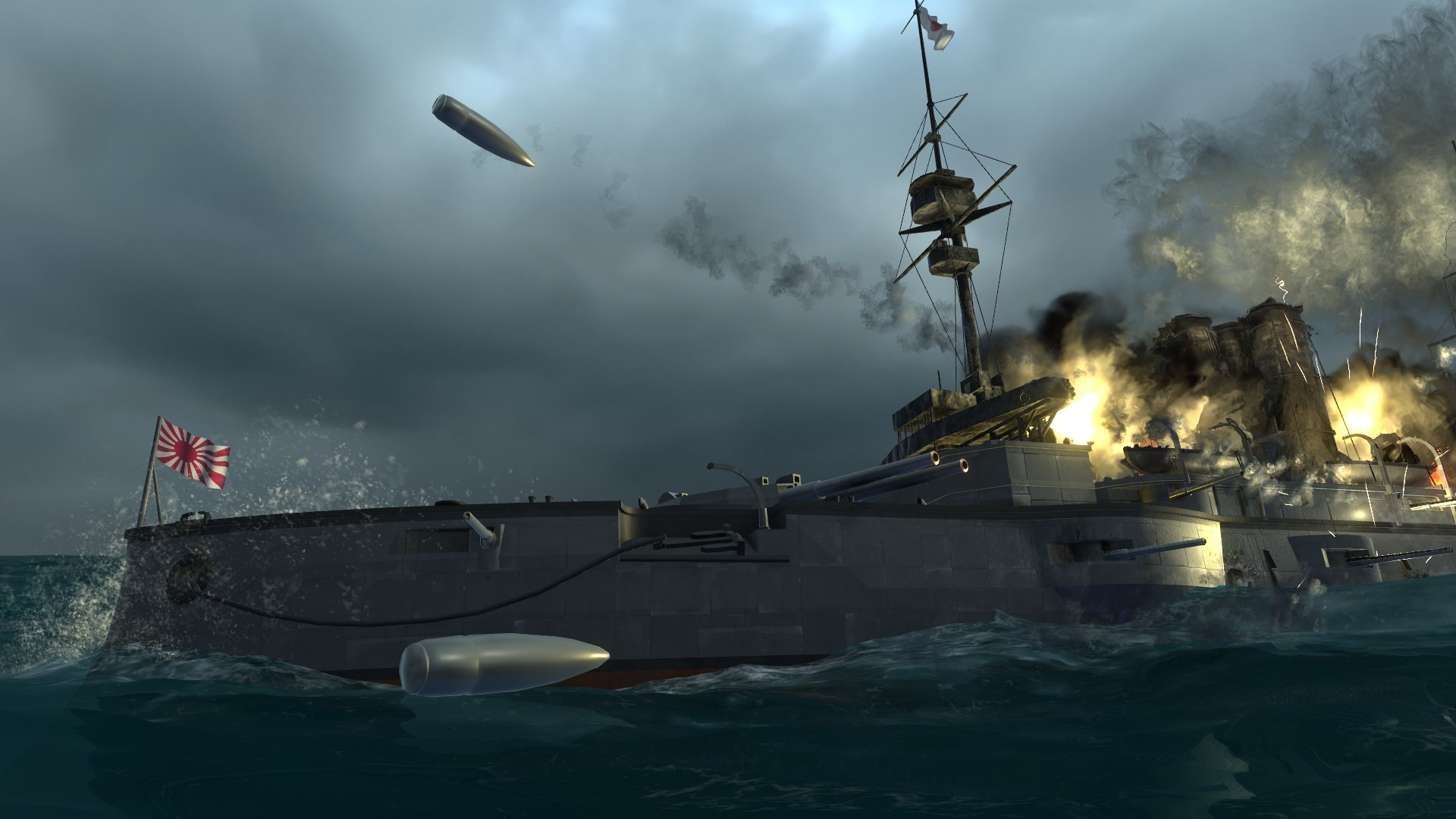 Conscious that Early Access UAD already offers wet wargamers both quality and quantity (There are weeks of entertainment in the Naval Academy and skirmish generator alone) I’m not going to conclude with petty grumbles about oversized waves (the gunboat in this image is in no danger) AWOL coastlines, and the strange lack of capsizing. What I will do is use the Tally-Ho Corner soapbox (“Foxo – For Cunningly Clean Combinations!”) to politely request a selection of historical battles. Tsushima, Dogger Bank, Coronel, The Falkland Islands… I reckon Ultimate Admiral: Dreadnoughts could bring fascinating engagements like these to life in a way no wargame has yet managed.