One of the reasons Train Simulator remains twice as popular* as its successor, Train Sim World, has to be its packed roundhouse of high-fidelity steam locomotive add-ons. In the past, whenever I got the urge to crew a kettle, I climbed aboard one of Bossman Games‘ or Victory Works‘ British creations. Lately, though, I’ve been doing most of my firebox feeding and boiler tending in all-American antiques made by an outfit called Smokebox. 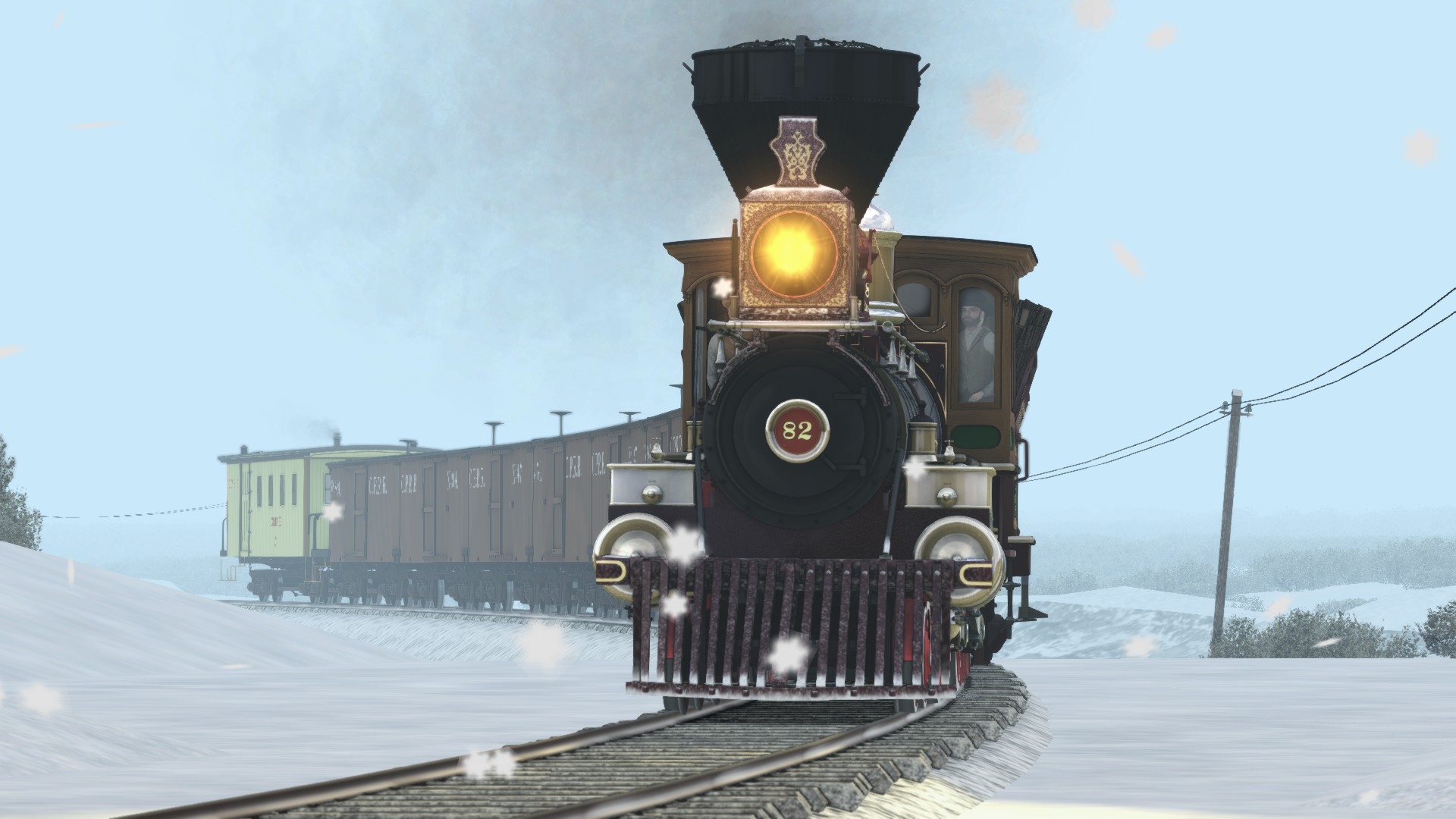 Just as third-party Flight Simulator and X-Plane devs show relatively little interest in the aerodynes of the early 20th Century, most Train Sim add-on artisans seem content to cold-shoulder 19th Century railway history. While recreating plausible Victoriania is undoubtedly difficult (working survivors are few so research can be challenging) the charismatic Old West buffalo-spookers produced by Smokebox illustrate what can be achieved when passion, skill and scholarship are combined. 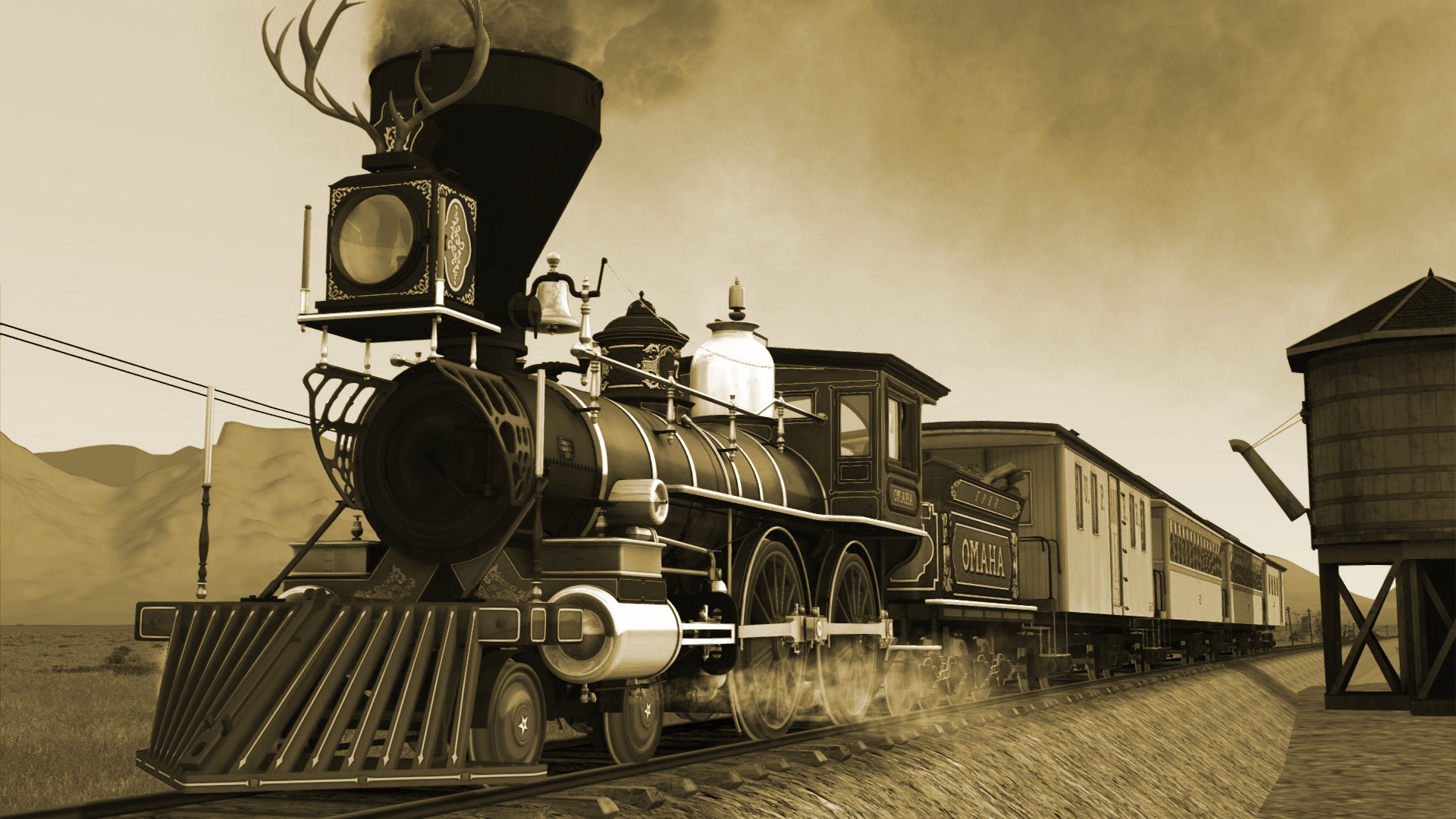 Jupiter, Idaho and Omaha, Union Pacific no.119*… it doesn’t matter much which of the studio’s ‘American Standards’ you purchase – all are beautifully crafted and great fun to operate. 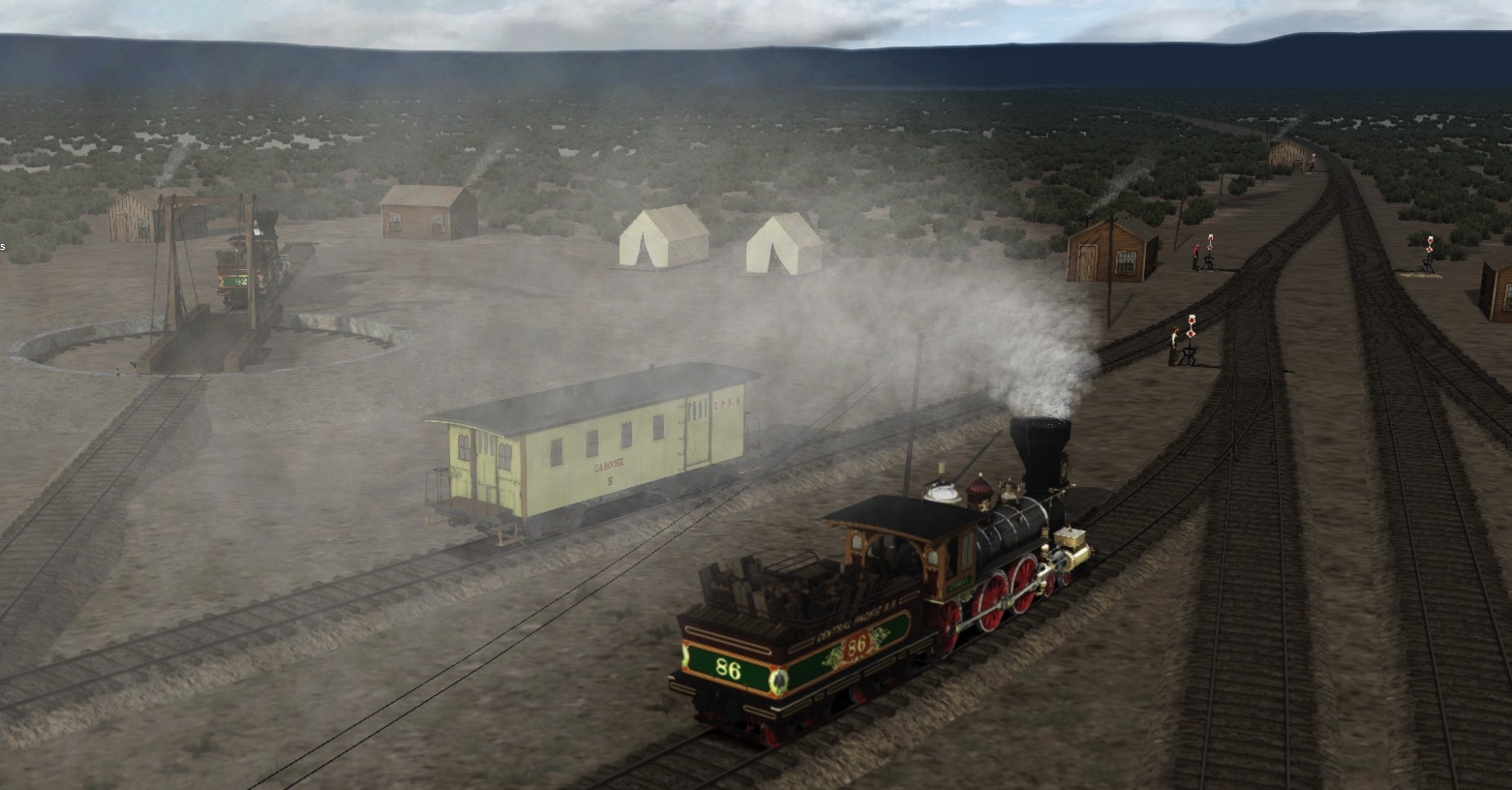 Fifteen pounds buys you an example of a truly iconic class (you’ll need to spend a bit more to obtain an appropriate environment for your purchase). Produced in staggering numbers*, the ‘American Type 4-4-0s’ were, by a long chalk, the most common form of motive power in the USA between 1855 and the turn of the Century. These are the machines that cameo in countless Westerns, that witnessed the driving of the Golden Spike at Promontory Summit in 1869, and participated in the American Civil War locomotive chase that inspired Buster Keaton’s ‘The General’.

* Think the Class 47s were ubiquitous? There were fifty times more Americans. 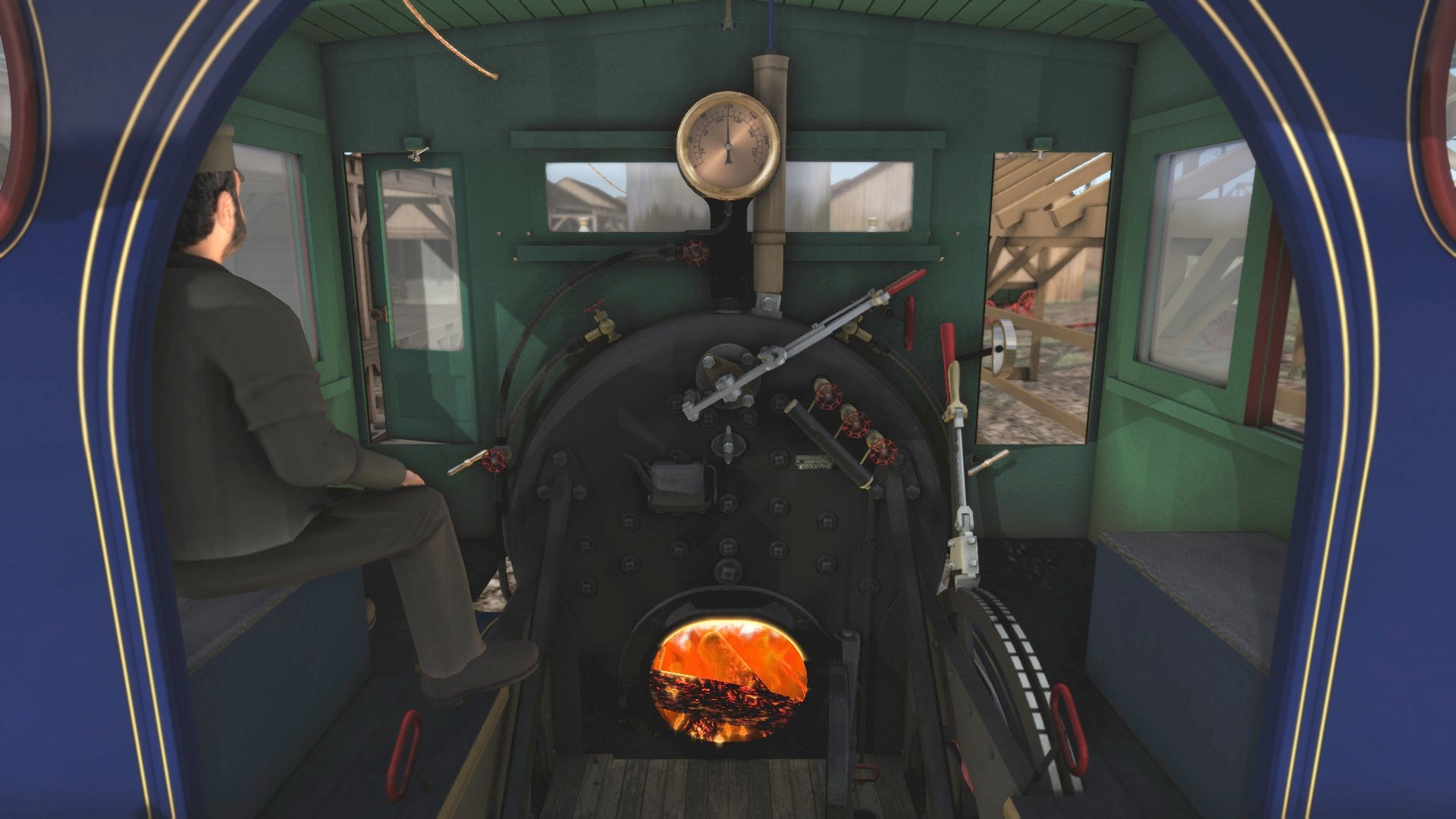 Stepping on to the footplate of an American for the first time, chances are you’ll be struck by the familiarity rather than the strangeness of the surroundings. Most of the controls and instruments present in the cabs of these cowcatcher-equipped continent shrinkers would be instantly recognisable to the driver of a post-WW2 steam loco. The big regulator lever that governs how much steam is delivered to the twin cylinders isn’t hard to find, nor is the similarly hefty reverser lever, a control not disimilar in effect to a car’s gear selector. High on the backhead is the prominent steam gauge, and low down by your feet the small door behind which the all-important inferno blazes. You’ve got handles to activate a sander to help the wheels grip, a blower to rouse the fire when the loco is stationary or coasting, and front and rear dampers to encourage/discourage combustion when you’re in motion. Naturally there are also valves for replenishing the boiler with water from the tender, and a handle that allows the cylinders to be drained of potentially disastrous condensation as the loco moves off. 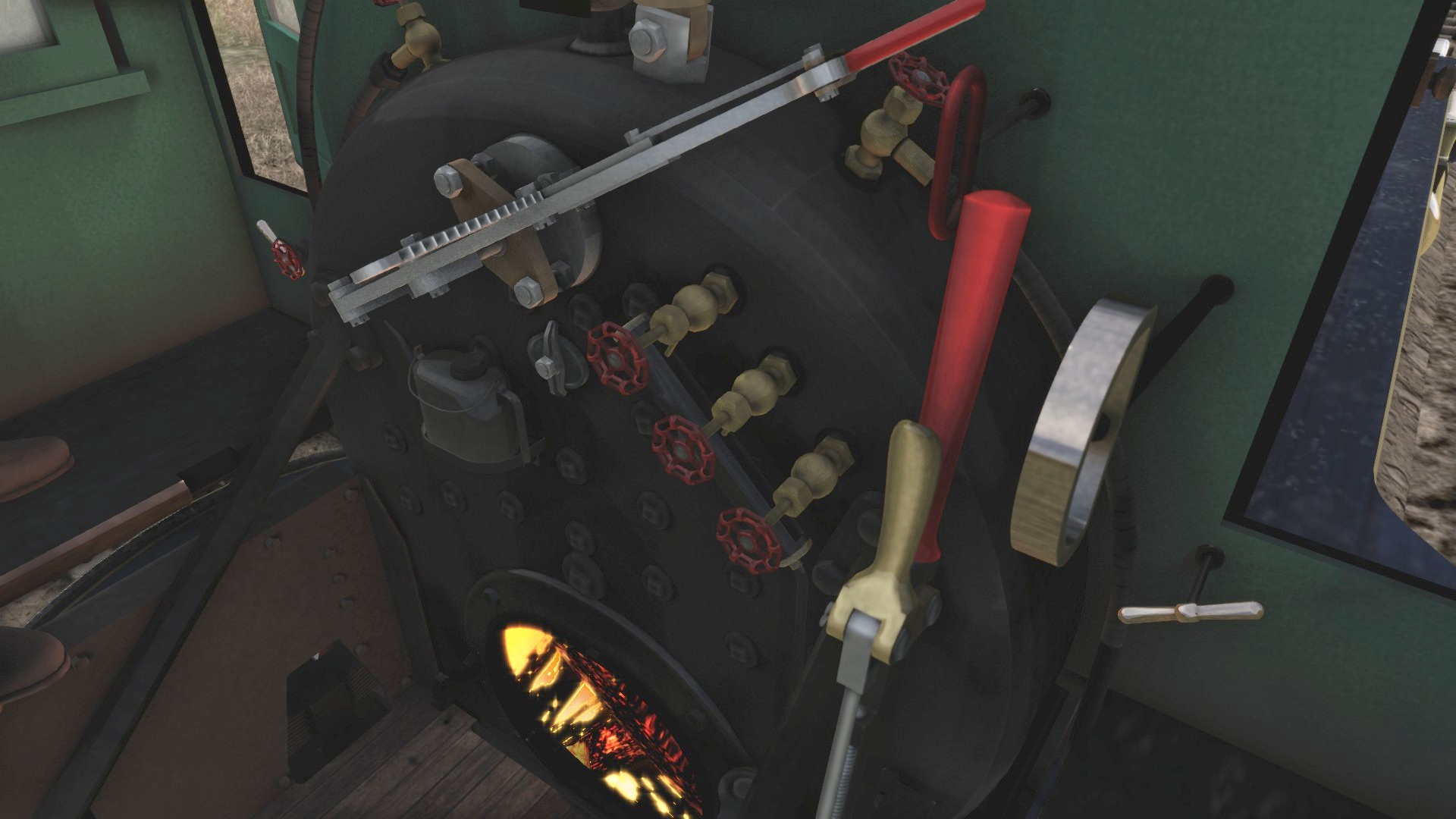 Where these ancient iron horses differ significantly from their ‘modern’ relations is in their decidedly basic boiler management aids and primitive braking arrangements. Conspicuous by their absence are sight glasses, the thermometer-style gizmos that, in the likes of Flying Scotsman and Mallard, inform crews how much H2O is left in the boiler. The stewards of colourful characters like Jupiter, Leviathan, and Storm, have to rely on three ‘try cocks’ – valves set at different heights in the boiler. Depending on the water level, when turned these valves either emit steam, steam and water, or water. 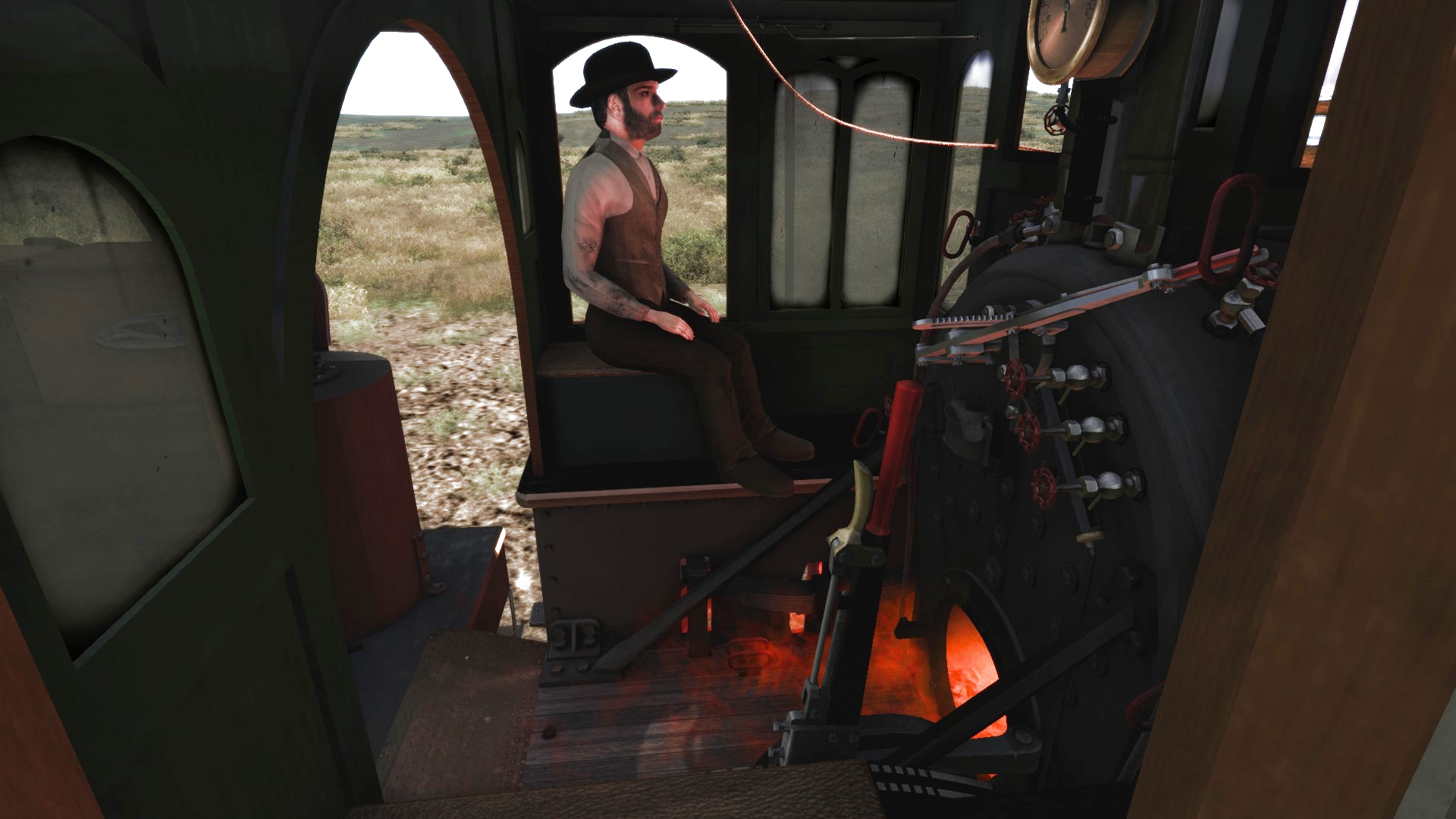 Searching for anything resembling a brake lever is a pointless pastime. Ignore the largely irrelevant wheel-operated handbrake on the tender, and the only retardation devices at your disposal are the reverser and the whistle. Assuming you’re not running ‘light’, one short toot on the latter sends an invisible brakeman scampering through the train, applying brakes. Give two long wails, and he’ll busy himself releasing them. 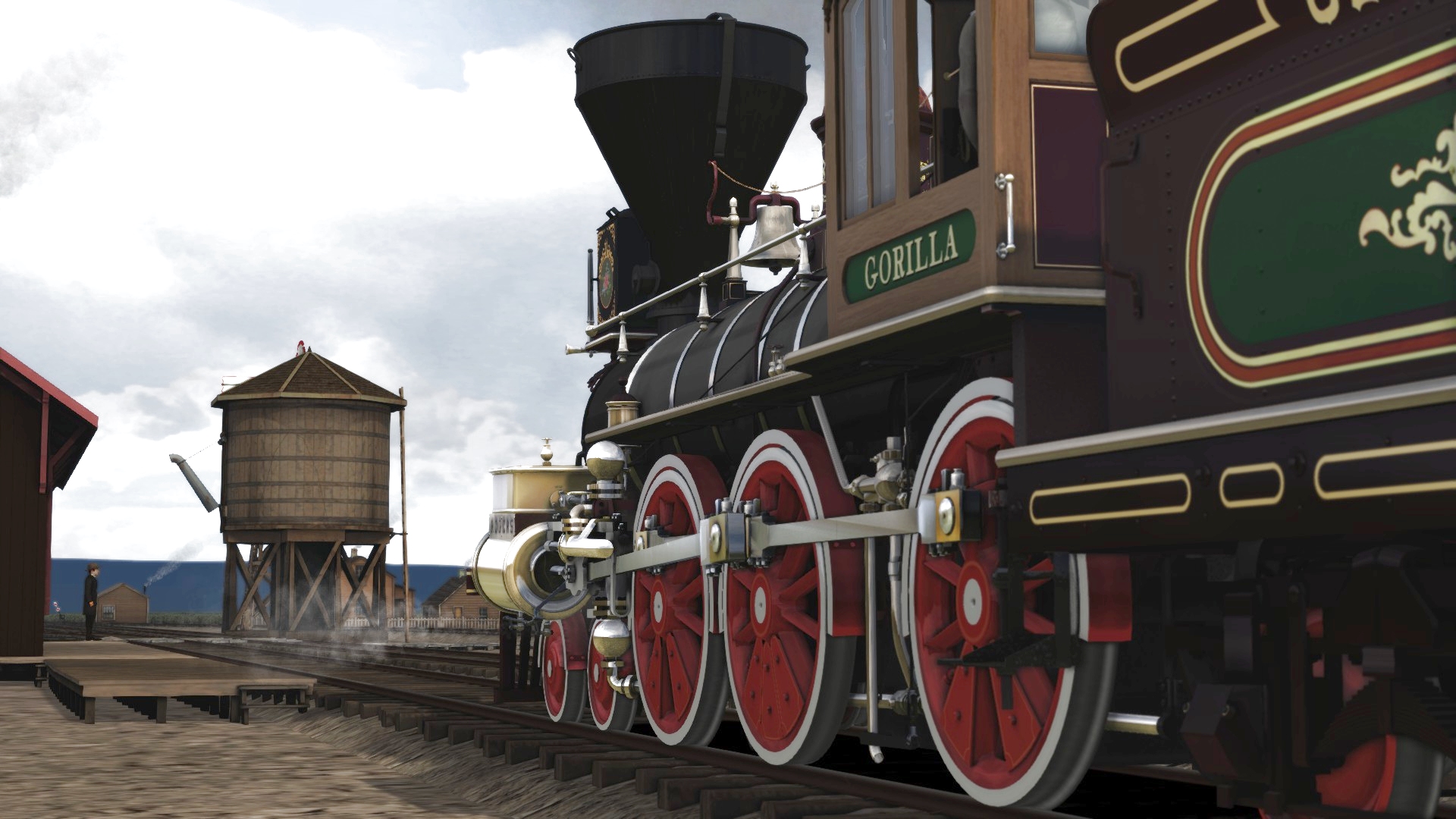 Thanks to bespoke wheelslip algorithms (even the amount of water in the boiler effects the chances of your driving wheels spinning in place) and sophisticated steam propagation simulation, starting a Smokebox loco can be just as challenging as stopping one. As per the prototype, adjusting the regulator doesn’t instantly alter loco speed*. Because the journey of steam from steam dome to steam chest to cylinder is fully modelled and impacted by things like reverser position and current piston speed, we get authentic throttle lag that must be anticipated and accommodated.

* There is an ‘easy’ control option that eliminates the delay. 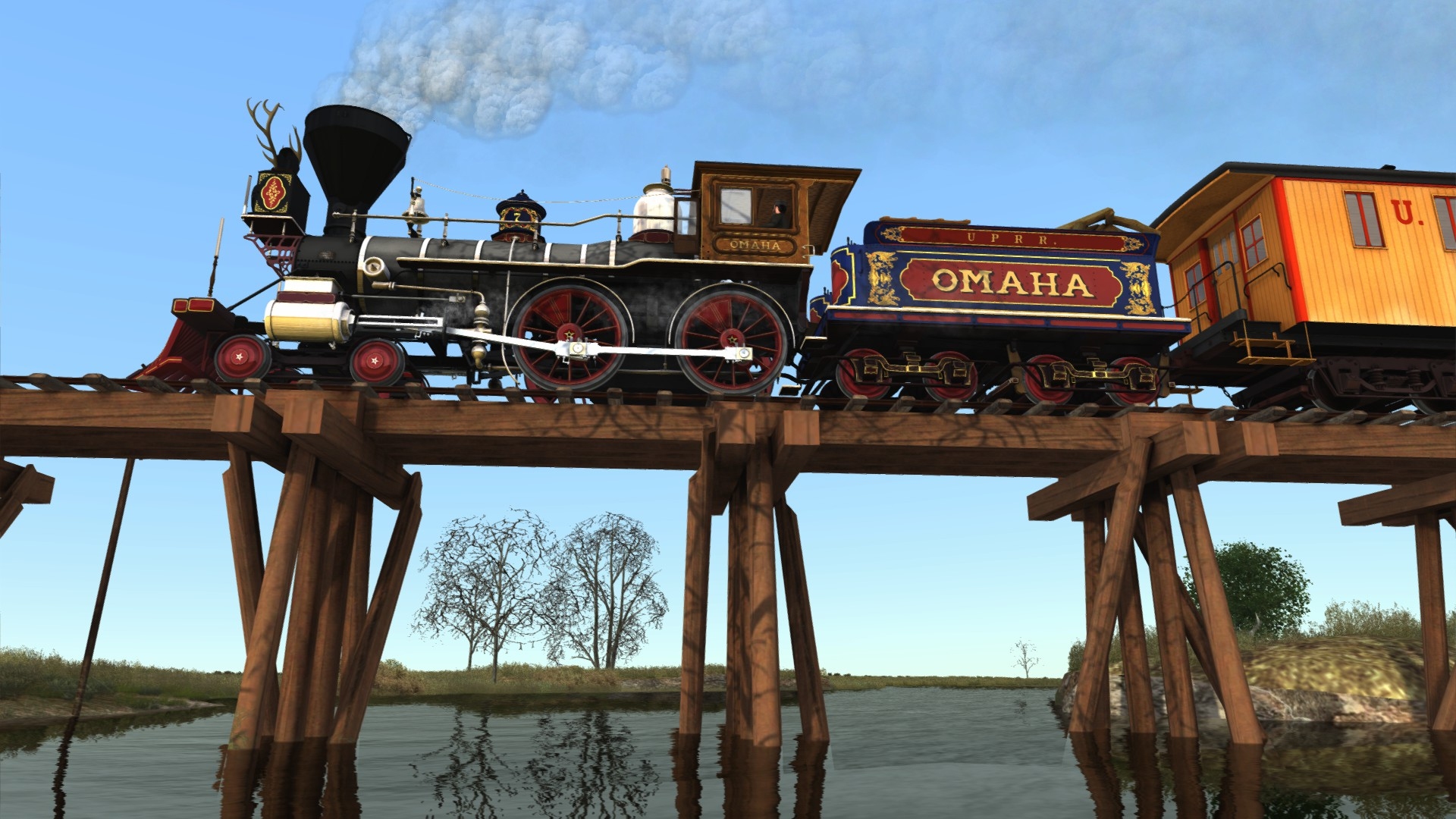 Listening for the sound of trickling water from the try cocks, the percussive stammer that accompanies wheelslip, the changes in track noise that indicate gathering speed (Did I mention there’s no speedo?)… the Americans are machines you drive as much by ear as eye. 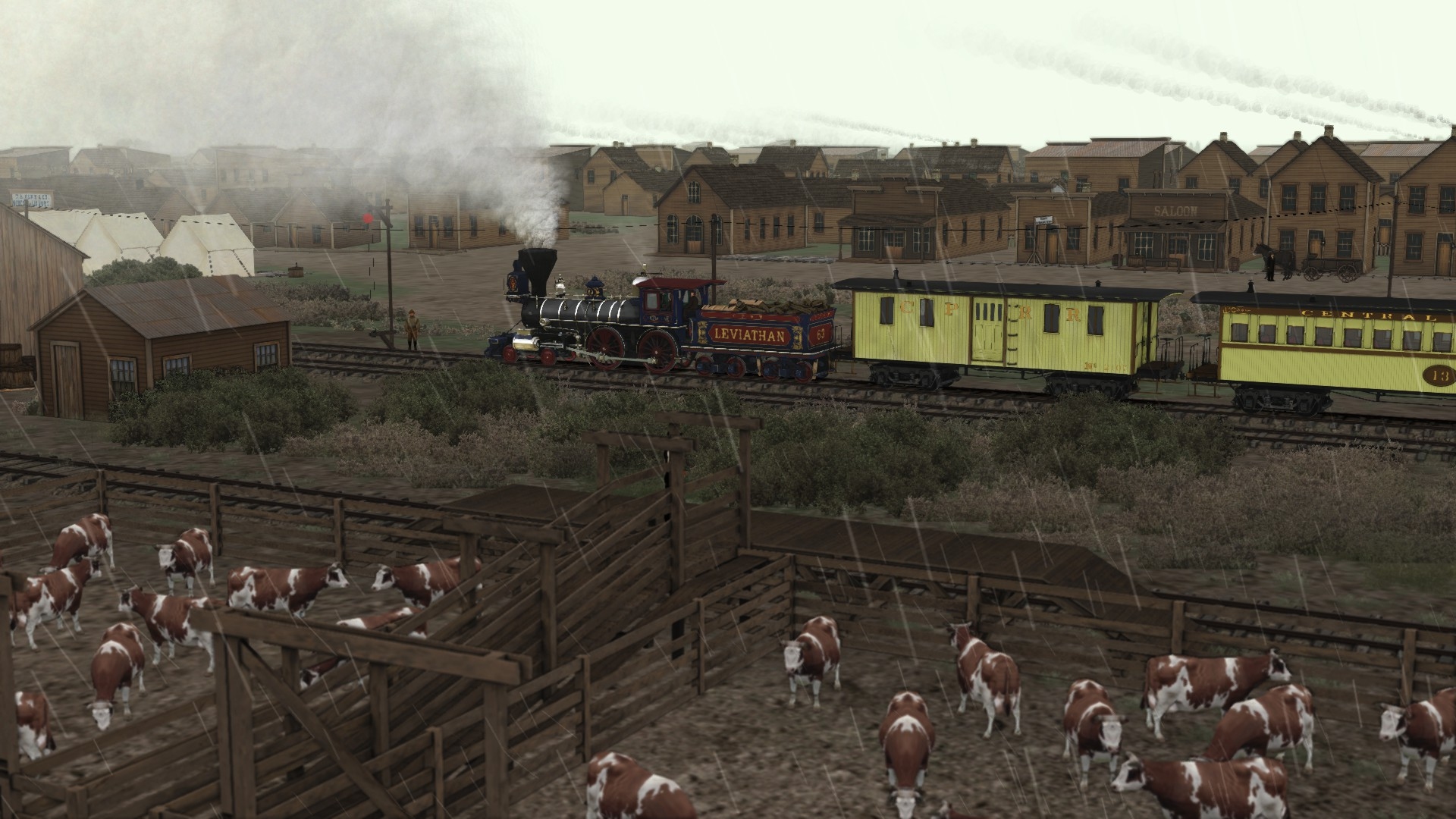 Knackering one isn’t easy, but I’d be lying if I said I’d never managed it. Overfill your boiler or allow it to boil dry. Forget to open the cylinder cocks before setting off. Overspeed the valve gear when descending or wheelslipping. Ask too much of the reverser when using it as a brake. All of these blunders can generate fun-fracturing pop-ups. 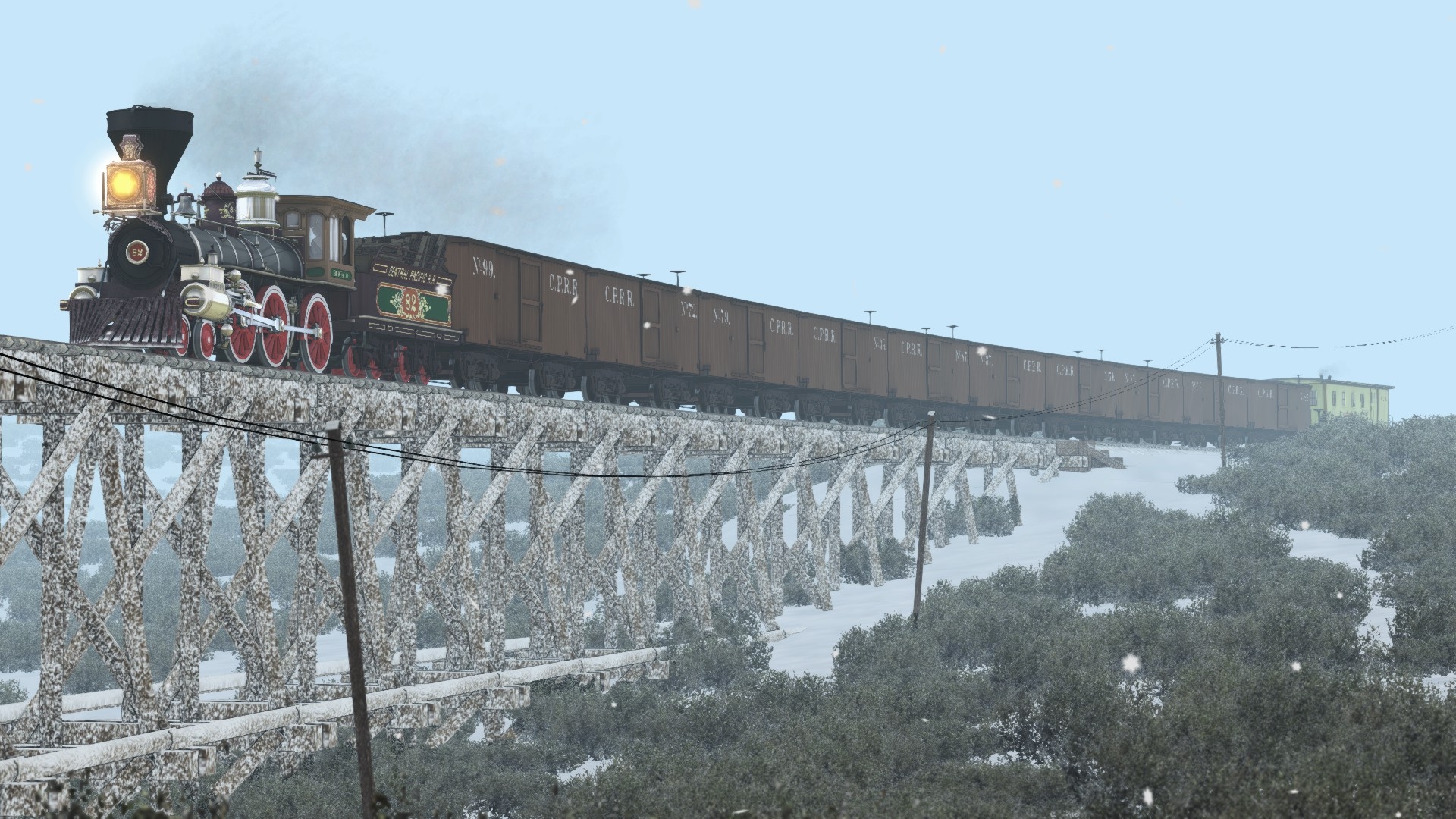 While most of the type’s quirks are explained in the excellent manuals, book learning will only take you so far. To get the best out of the Americans, you must be willing to experiment with cut-off (reverser) and throttle (regulator) positions under different conditions. There are a few clues to optimal settings in the briefings for the scenarios that come with each DLC, but until you’ve wrestled heavily laden Americans up a few inclines, and battled to slow them during a few steep descents, complete confidence will be elusive. 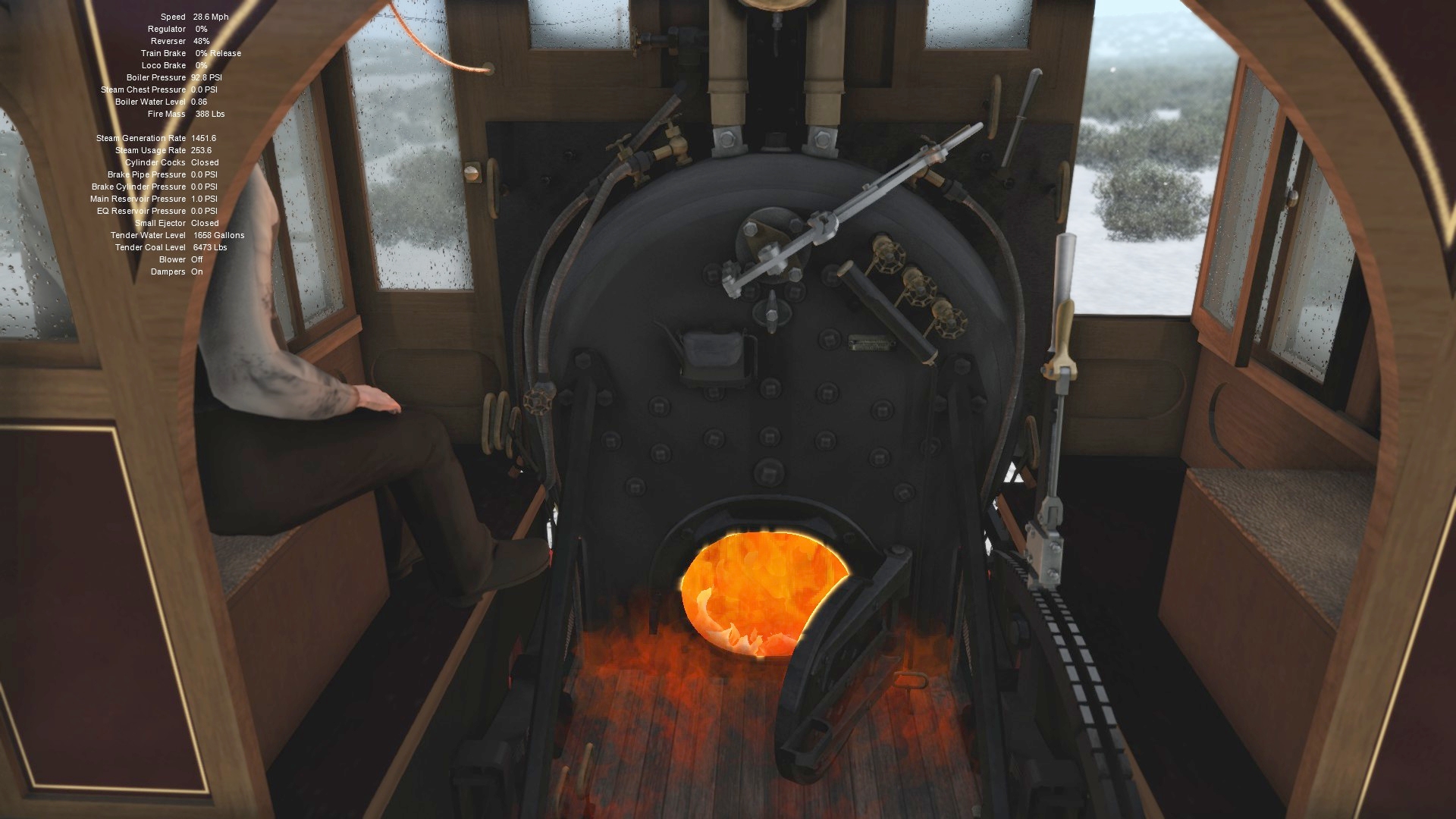 Although I’ve yet to encounter anything I’d describe as a bug, locos such as Jupiter can be reluctant to sup water from their tenders at times (an almost neutral reverser position seems to help). Their bespoke systems also don’t always cooperate with the ‘F4’ HUD perfectly, so I tend to avoid using that when I’m plying the plains or traversing the Great Salt Lake. 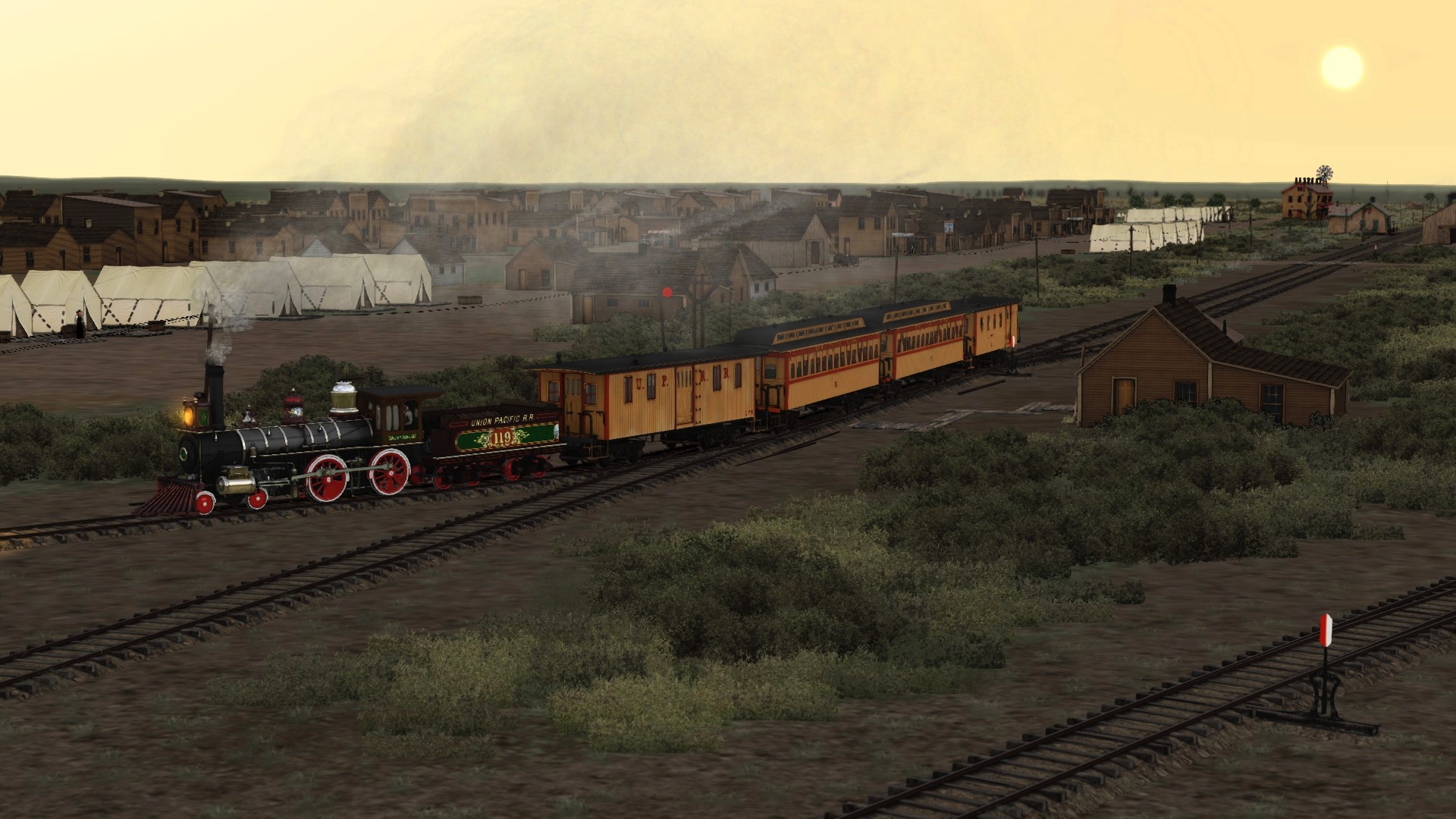 Arguably the most disappointing feature of these fabulous locos is the lack of sympathetic sceneries. Right now, there are only two routes specially built for them. Both the 26-mile Cheyenne-anchored line (included in the Union Pacific No.119 add-on) and the 68-mile Promontory Summit route (£18 when bought separately, £26-£30 when purchased bundled with a loco) are dominated by seriously desolate rural stretches. 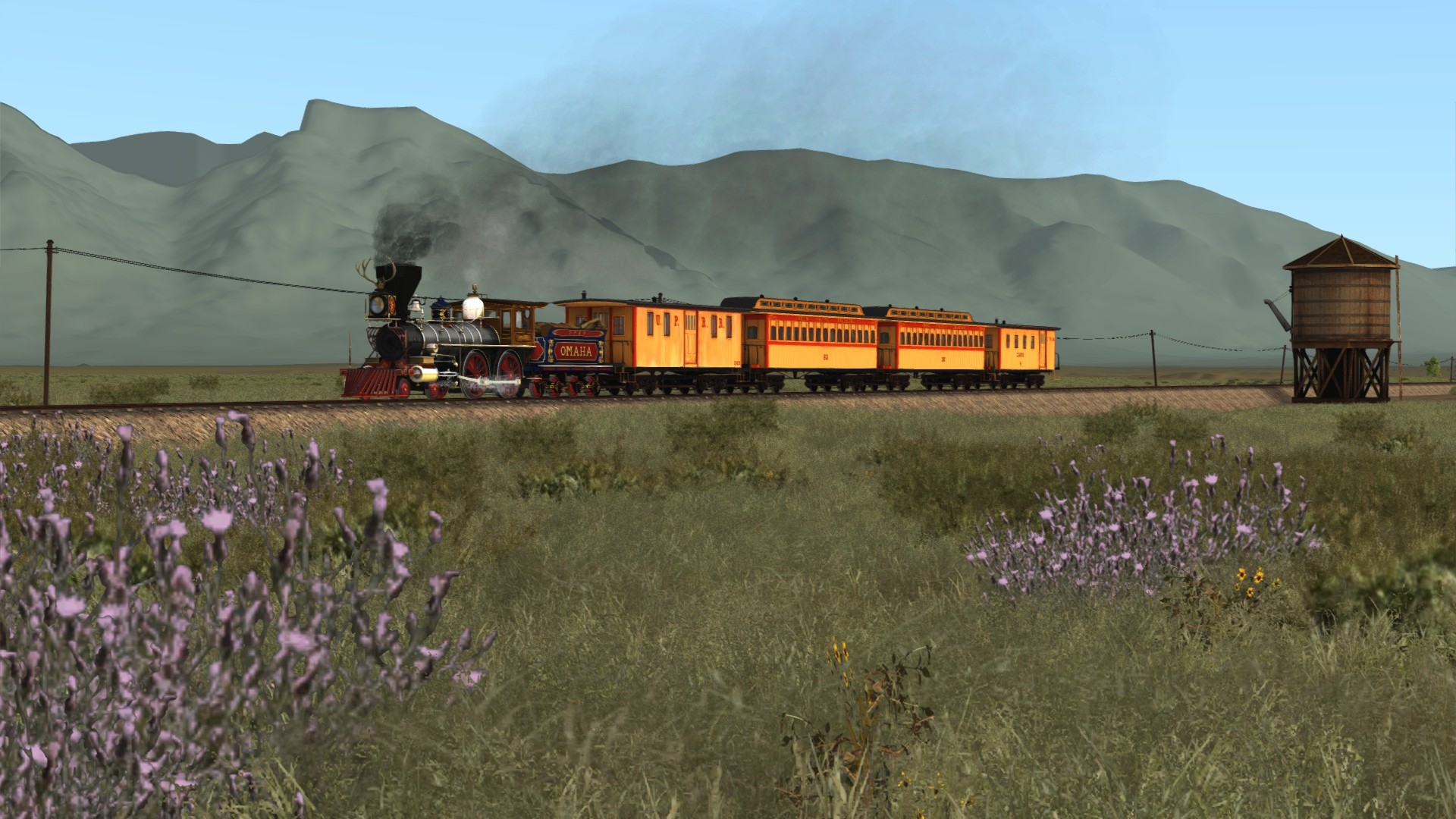 Although apt and fairly atmospheric, these tracts of framerate-friendly wilderness would benefit from a few touches of Western whimsy – wagon trains, cattle drives, buffalo herds… that sort of thing. Sometimes when I’m staring out at endless sage brush or salt flats, I find myself picturing an American Civil War scenery and scenario pack, or a trainrobber-infested ‘Tombstone’ map. Comforting mundanity might be one of rail simulation’s secret weapons, but I’m convinced, given the chance, the genre could excel at drama too. 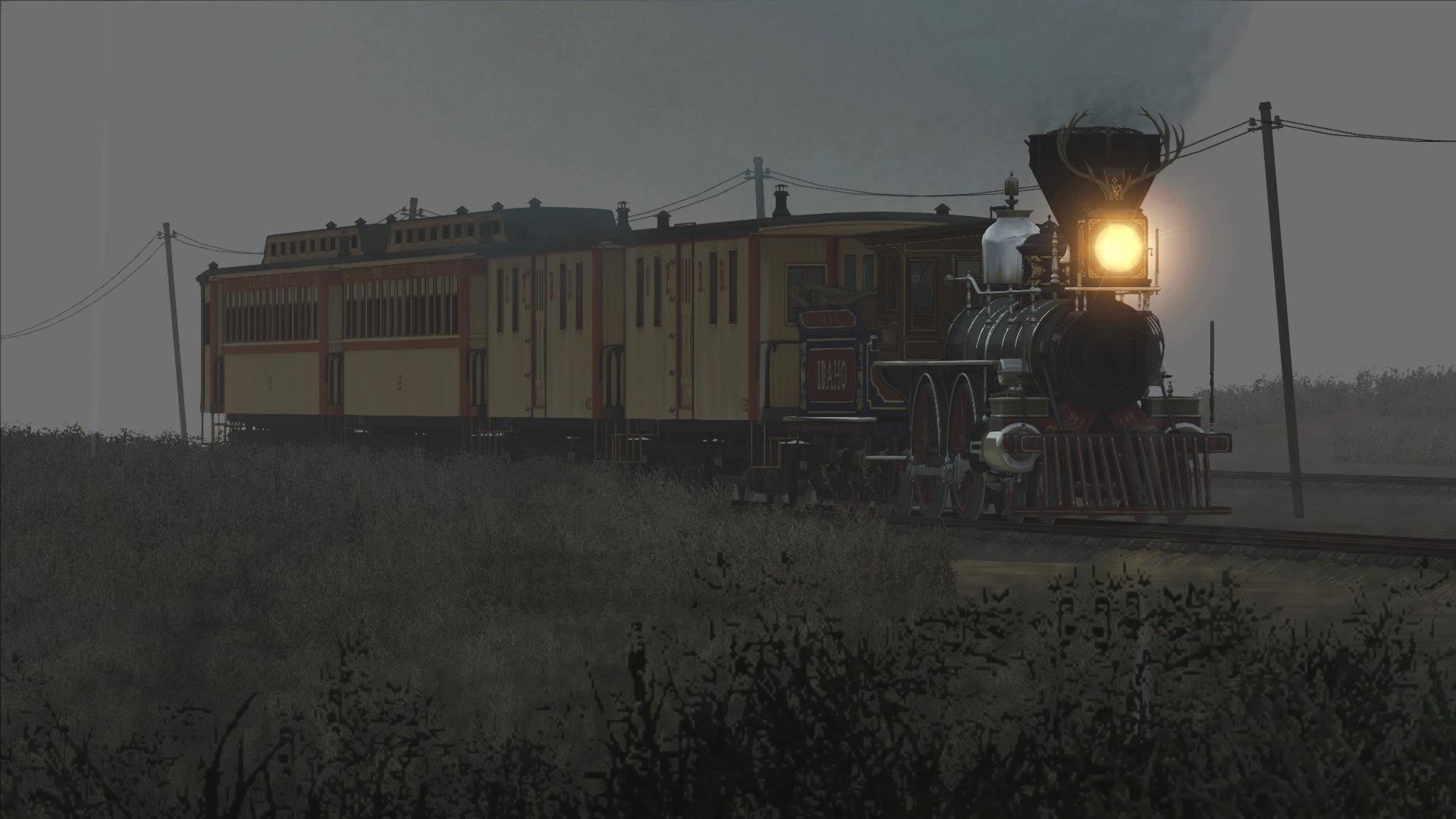