Any room on the list of classic WW2 what-ifs for another noodle warmer? To old favourites like “What if America’s carriers had been present at Pearl Harbour on December 7, 1941?”, “What if Goering had kept pounding British airfields in September, 1940 rather than switching to cities?” and “What if Vera Lynn hadn’t slain that cyborg assassin sent to kill Churchill?” I’d like to add “What if Hitler had been an avid wargamer?”

For this what-if to have any chance of altering the course of the war, you need to accept a crucial subsidiary what-if – not only was the Austrian house painter a grog, he had access to wargames as tough and honest as Cauldrons of War – Stalingrad. 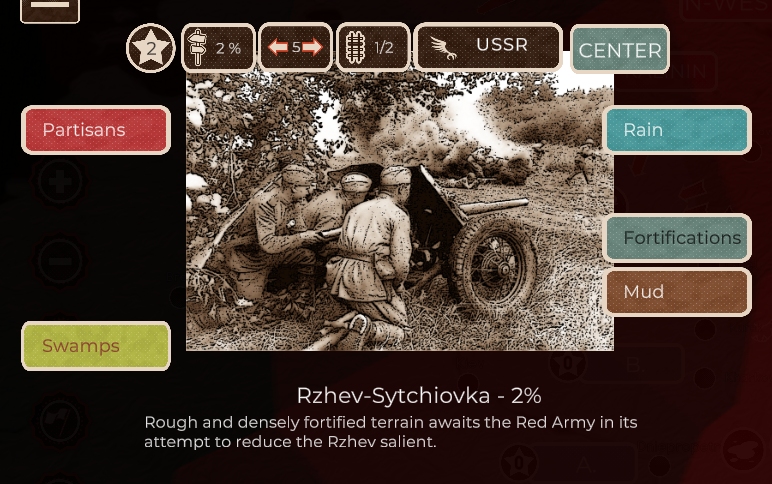 In Maestro Cinetik’s latest, General Winter is a sadistic Schweinhund, the Bolsheviks are fast learners, and the steppes eat Panzers, half-tracks, and trucks for breakfast, lunch, and dinner. It’s impossible to play the game’s absorbing 35-turn centrepiece as the Germans without thinking “This is madness. We should probably pack up and go home.” at regular intervals.

I know of no other computer wargame that condenses Case Blue as ingeniously or entertainingly as CoW – Stalingrad. Because Maestro Cinetik restrict order issuing with a mind-focusing Command Points system and refrain from smothering their map with hundreds of hexagons and counters, it’s possible to play the two-pronged Wehrmacht push towards the Volga and the Caucasian oilfields from start to finish in a single evening. 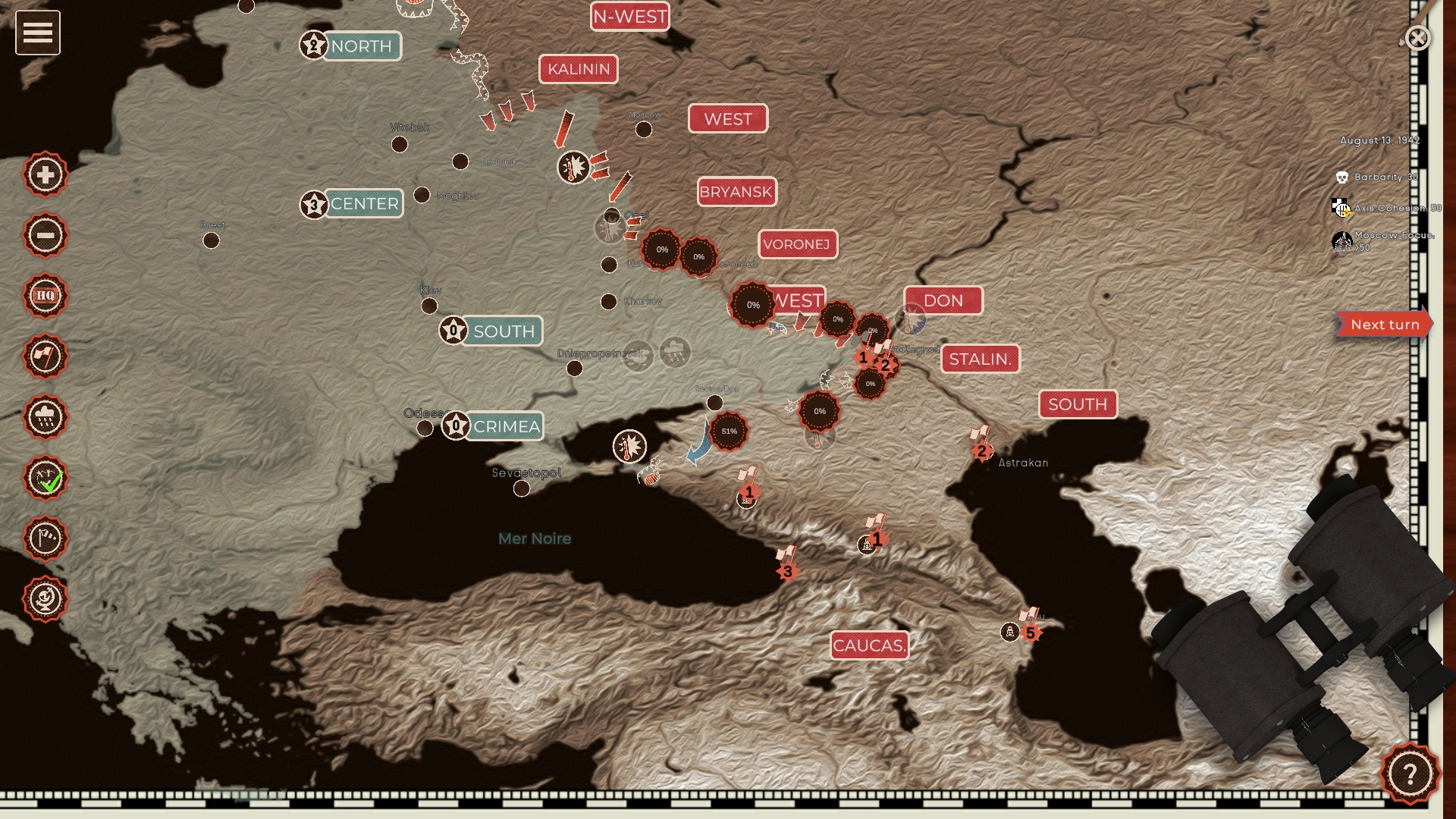 The system is, bar a few new mechanisms and order types, identical to the one used in CoW – Barbarossa. The map hides a network of operational tracks that the player uses to move closer to Victory Locations like Rostov, Stalingrad, Sevastopol and Baku. Progress on particular tracks is represented by a percentage figure and involves battering, encircling, and – ultimately – eliminating enemy forces using the army- and corps-sized units you’ve assigned to the op. Every action from shelling and aerial bombardment to assault and entrenchment, costs Command Points to initiate and your fund of these is always meagre.

Naturally, supply issues hamper your Ozymandian schemes just as much as CP limits do. Between turns, a few lucky armies are resupplied by rail automatically (the rail infrastructure in the area and the rail capability of the Group overseeing the op determines exactly how many). The busier a portion of the front, the more likely it is that you will need to supplement this ‘free’ replenishment with CP-sapping resupply by truck, cart or transport plane. 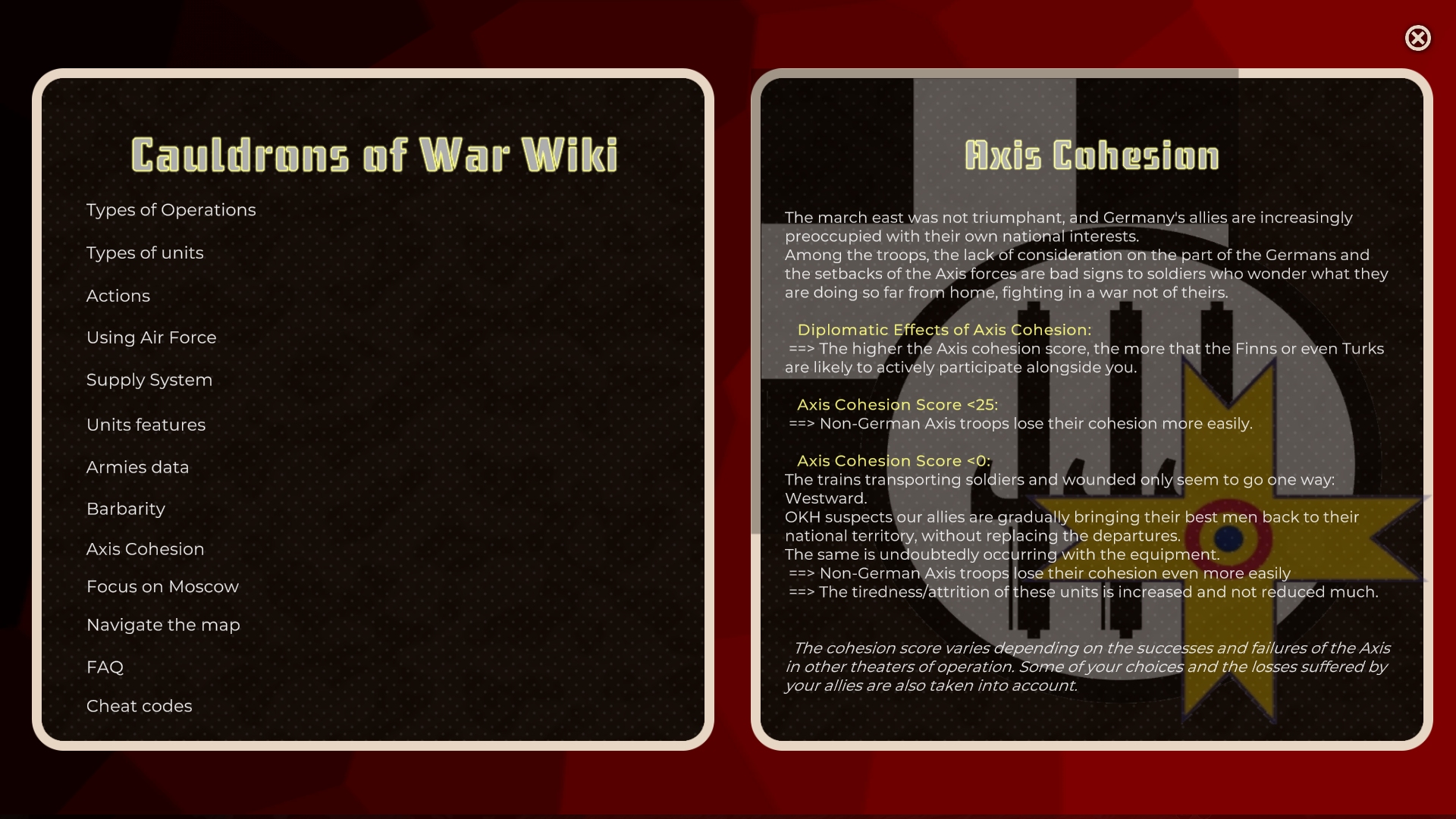 Mix in momentum killers like exhaustion, attrition, and extreme weather, plus a new variable that keeps tabs on the unhappiness of Axis partners like Italy, Romania, and Slovakia, and the result is a wargame in which the enemy is sometimes the least of your troubles. CoW – Stalingrad explains why the German war machine ground to a halt on the banks of the Volga, every bit as eloquently as titles that cost five times as much and take thirty times as long to play.

Some of that explaining it does with the help of arresting policy choice invitations and faits accomplis like these:

The scripted events and the prefabricated operation web prevent your versions of Case Blue and the Soviet ops that, by March 1943, had driven the invaders back to their summer 1942 positions, from straying too far from actuality.

Does the game’s French mastermind, Thomas Guyon, understand that his customers want to embroider history not simply recreate it? Happily, yes. Although the best results I’ve achieved in the ten boredom-free hours I’ve thus far spent with CoW – Stalingrad, are draws, I’ve rewritten the history books several times. For example, I’ve taken both of the famous ‘grads’ and, on one occasion, done so well in the Caucasus that Turkey decided to get off the fence.

Broad-brush wargames that take hex-gobbling advances in their stride, sometimes struggle to capture the flavour of sieges and protracted urban warfare. While I feel Sevastopol caves a little too speedily when pummelled with mighty railway guns, securing Leningrad and Stalingrad requires a plausible combination of patience, determination, and hardheartedness. By the time I’d succeeded where Paulus failed, the row of army icons representing my weary street fighters was seriously faded (an indicator that units are understrength) and liberally festooned with black hearts (low cohesion/morale). It was easy to picture the shabby uniforms, battered weapons, and hollow eyes. 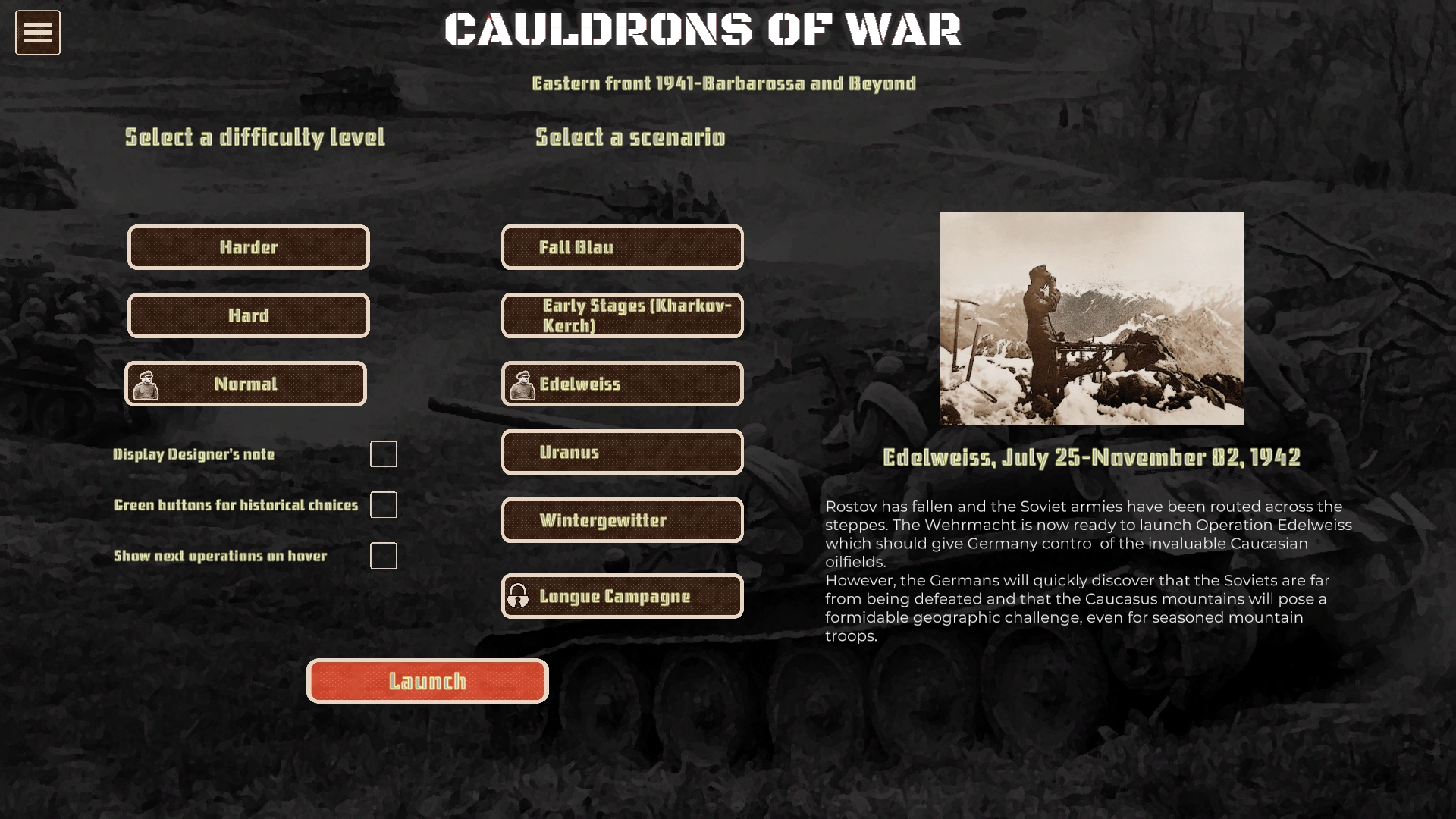 All of the six scenarios can be played from both sides, enjoyed as PBEM and hotseat diversions, and stiffened with ‘Hard’ and ‘Harder’ difficulty settings. The latter longevity aids change resource levels and impact variables like Axis cohesion and Moscow focus instead of altering AI routines that, helped by those operational tramlines, arguably need little assistance. 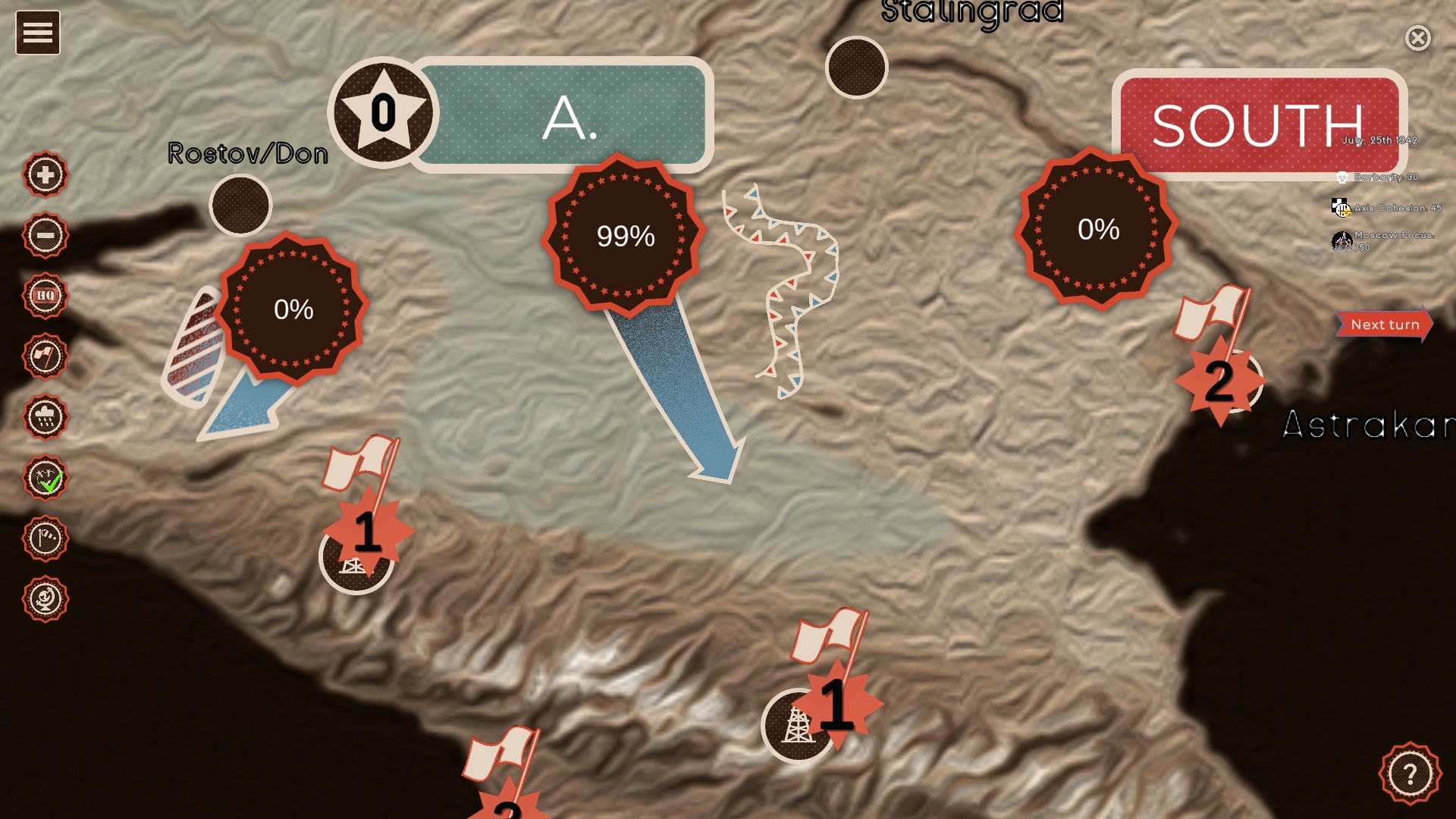 None of the comments scrawled with red rather than blue biro in my play notes are sufficiently damaging to prevent CoW – Stalingrad becoming the third game in three weeks to earn Tally-Ho Corner’s coveted (?) seal of approval (I really must design an appropriate graphic and start applying it to reviews). It would be remiss of me not to articulate my grumbles, though. 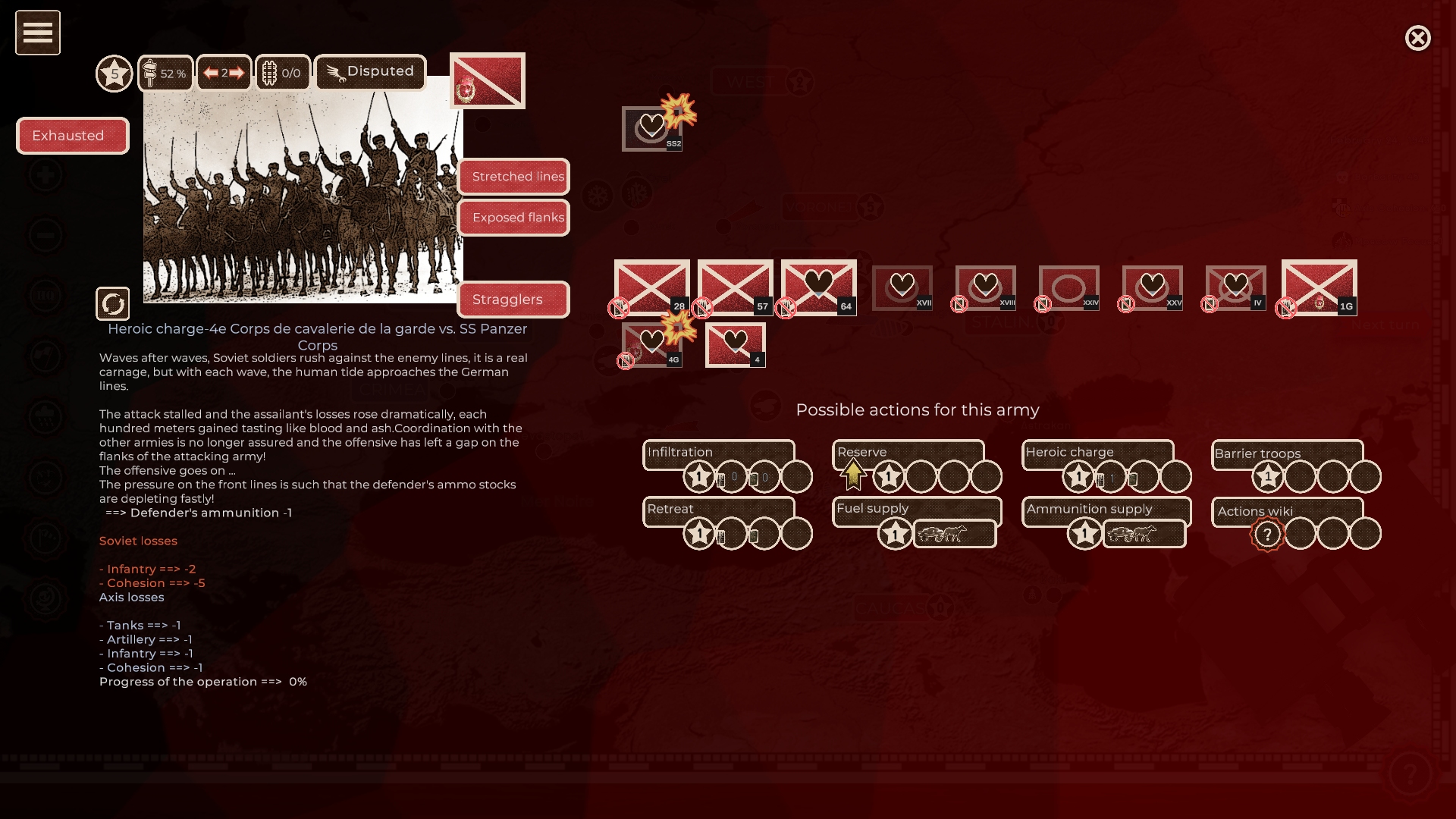 If you’re used to hexagons, number festooned chits, and brazen military maths, the game’s gnomic approach to battle may disorientate at first. OK, there are four Soviet armies standing between me and Astrakan. How should I tackle them? What should I do first? ‘Blitz’, ‘Breakthrough’, ‘Scout’ ‘Infiltration’, ‘Shelling’…? Integrated documentation provides tactical clues, and instinct won’t lead you too far wrong, but until you’ve a bit of experience to call upon, bouts of low-intensity bewilderment are par for the course. As there’s no results predictor, the first inkling a greenhorn may get that an attack is unwise is an eye-watering list of friendly losses displayed after the die has been cast. 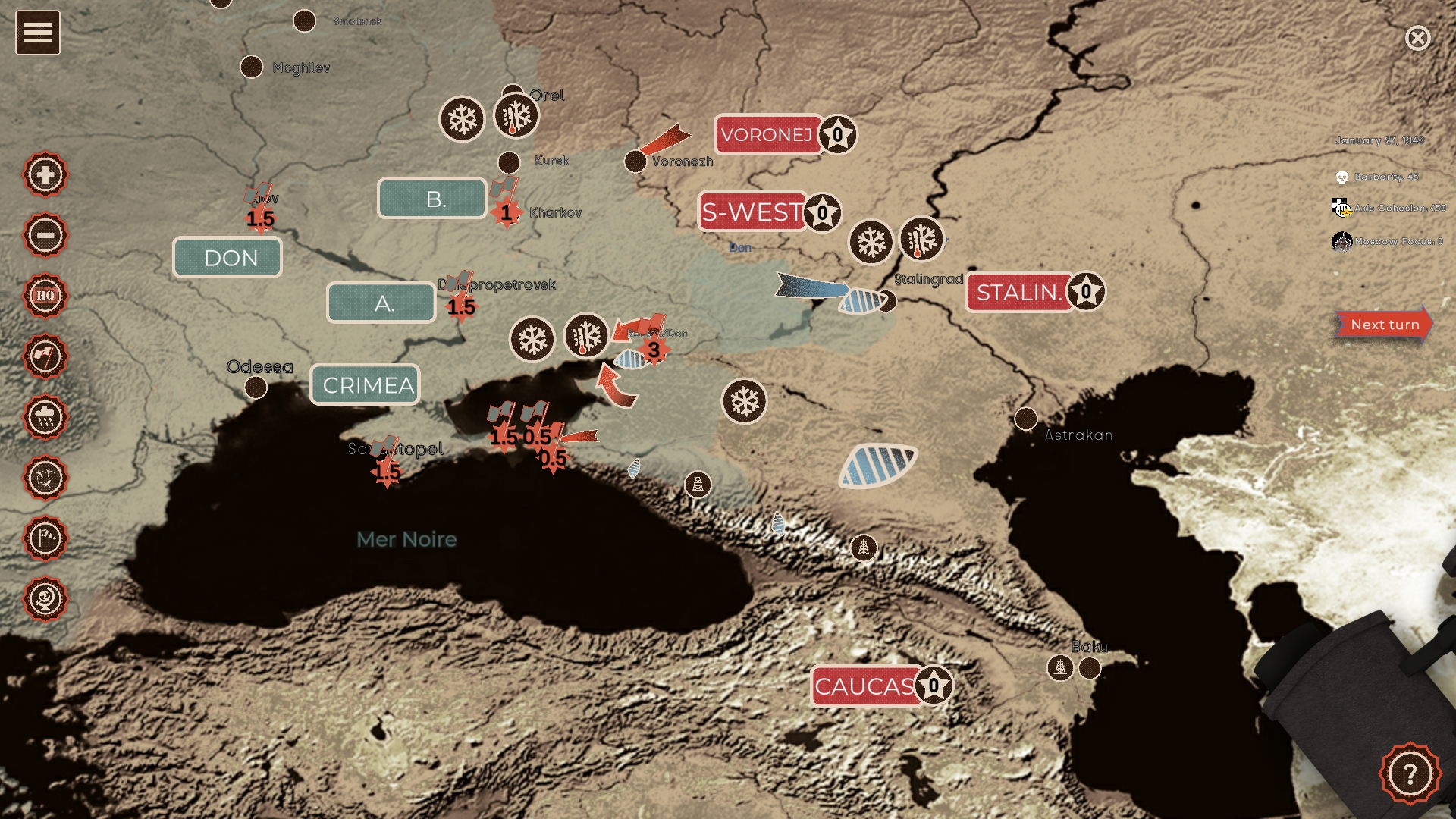 There have been cartographic improvements since I complained about CoW – Barbarossa’s under-utilised map (cursoring an HQ now highlights linked operations and shows operational progress) but the way CoW – Stalingrad presents information still feels slightly cack-handed. In a hexy East Front wargame you can usually see at a glance where forces are concentrated and where problems are developing. In this one, because army counters only appear when operations are clicked, seeing the ‘big picture’ involves a fair bit of LMB dabbing. The fact that the map isn’t visible when you’re moving units between operations is unhelpful too. 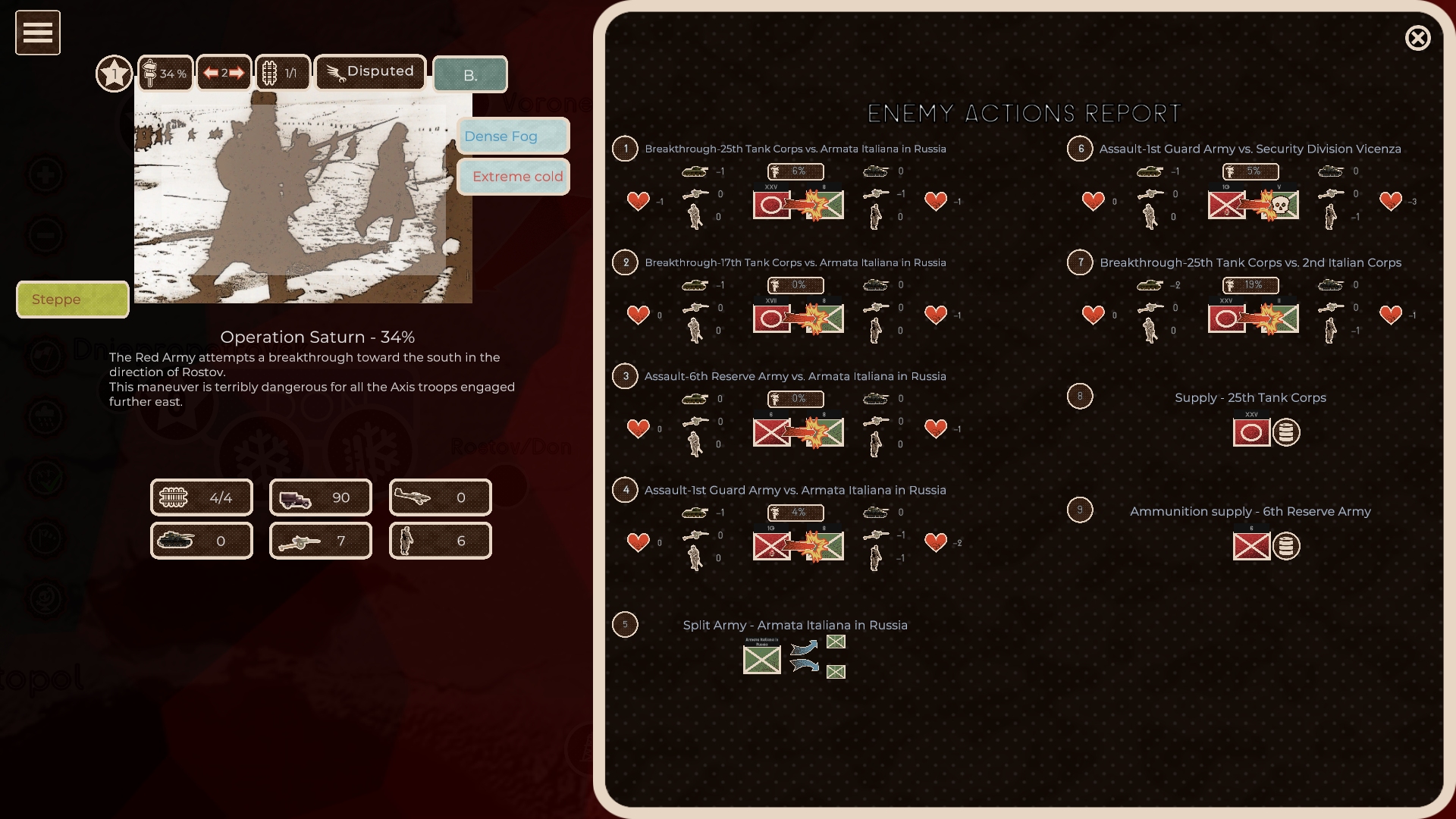 Flavour texts in need of tweaking… overlapping operational icons… an inconsistent approach to Fog of War (you often know more about enemy cohesion levels than you do about the weariness of your own forces)… as I thought, scanning my red remarks for genuine red flags, I find none. If your ears prick up when you hear the name ‘Stalingrad’ and your pulse quickens when you see pics of Panzers and T-34s beetling across treeless plains, Cauldrons of War – Stalingrad’s minor imperfections will probably barely register.

Steam insists this $10 hexless wonder will be released on April 26. Buy through itchi.io and you can start eyeing oil wells and cursing Vasily Chuikov immediately.