Despite exposure to Charles Games’ and iNK Stories’ fine creations I still recoil slightly when I see the word ‘edutainment’ in the blurb for a game. I recoil because I know – or think I know – what’s coming. 1. Lots of reading, listening, or watching, when I’d prefer to be scheming and doing. 2. Little recognition of the fact that I might not be completely ignorant of Subject X. 3. The nagging suspicion that I’d have been better off investing my limited funds in a respected book on Subject X than an untried game. For £32 – Sagger’s Steam price – you could buy the nucleus of a modest library on the Yom Kippur War. Carefully chosen, those books would teach you more about Israel’s two-front 1973 fight for survival than this “strategic edutainment simulator”, but would they, I wonder, inform in such an efficient and engaging fashion? Seven years in the making, Media Alliance Gaming Studio’s rolling interactive history lesson has a few ragged edges, but, racking my brain, I can’t think of anything in its field that blends edification and entertainment more adeptly. 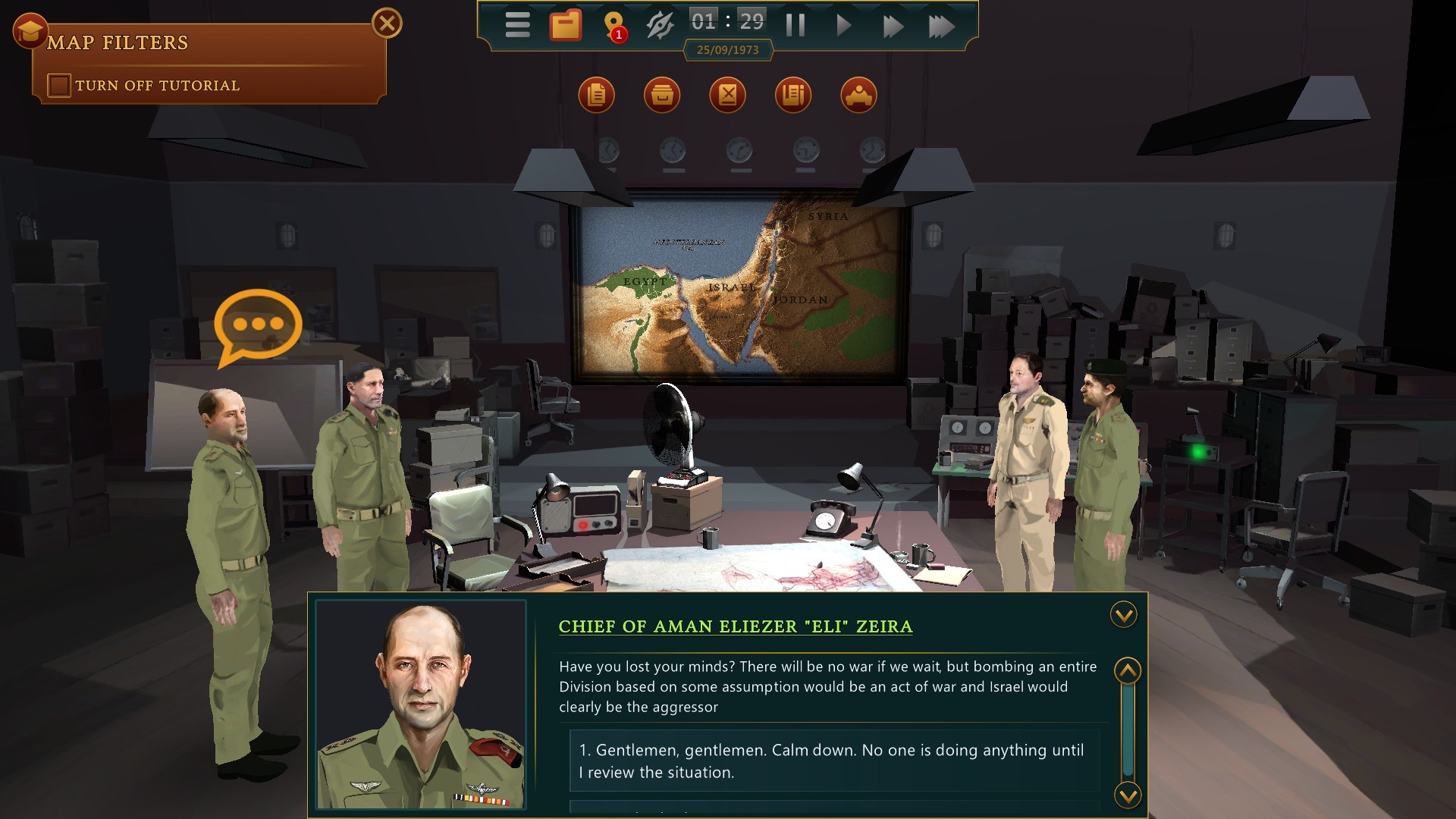 My ‘Be Golda Meir‘ headline in last week’s A2Z was, I now realise, misleading. You play a fictional ‘Supreme Commander’ rather than Israel’s first and last female PM. Your job isn’t to sheepdog the myriad blue counters that throng the game’s attractive theatre map, but to sheepdog the sheepdogs – historical generals. You’re there to analyse The Big Picture, weigh-up intelligence, yea or nay specific operations, and make crucial strategic decisions. 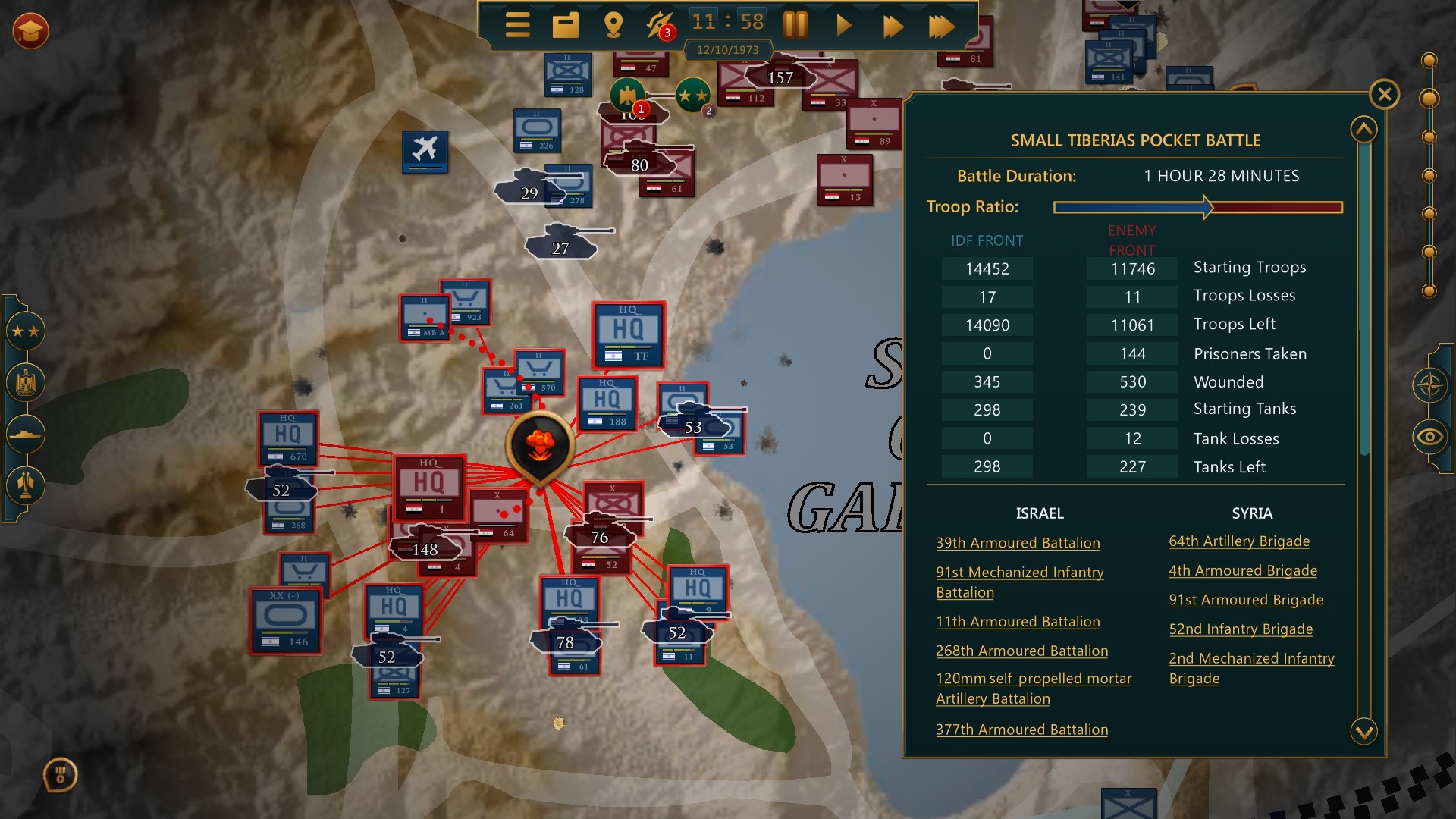 Inevitably, grizzled wargamers tackling Sagger will, from time to time, rue the fact that they can’t task troops directly. Viewed from altitude, the war’s decision-influenced amoebic convulsions bring to mind Steel Division II’s dynamic campaign layer, and Command Ops 2 scraps in full spate. More than once I spotted an opportunity or a threat and, out of habit, clicked on the nearest friendly chit. Such clicks allow unit status to be checked in detail, but are otherwise pointless. 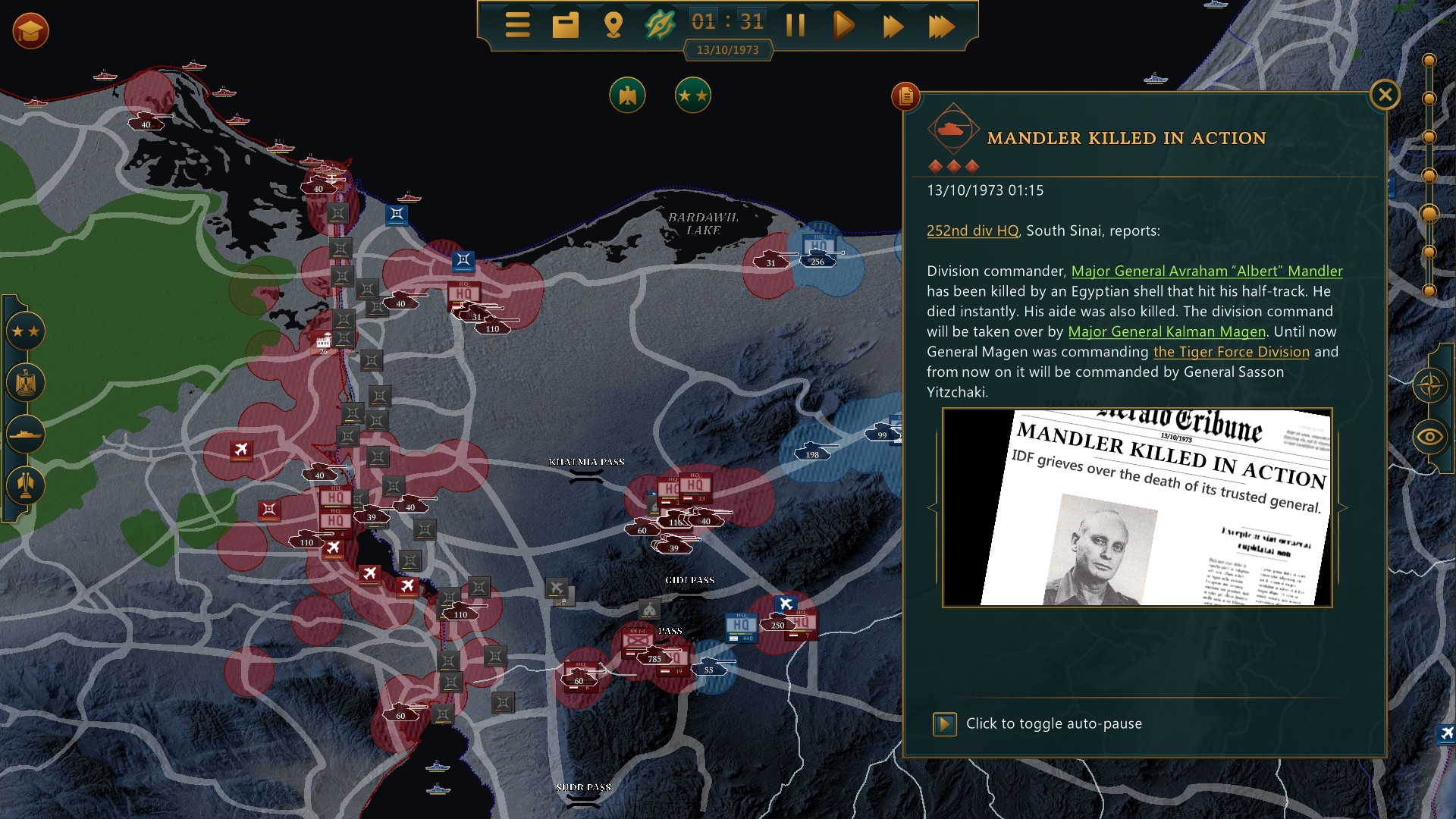 The urge to meddle – to dirty your hands with day-to-day general-ing – might have become distracting if Sagger wasn’t so good at keeping the player’s mind and mouse occupied with other activities. Because it’s rare for a morning, afternoon, or evening (nights tend to be quieter) to pass without something interesting landing in your in tray or someone phoning you for a chinwag or summoning you to a meeting, briefing, or interrogation, even if military micro-management was possible you’d have little time to indulge in it.

Some examples from my screenshots folder of the kind of things you’ll find yourself doing when you’re not watching mercurial front-lines ebb and flow, bulge and bow, in adjustable real-time. 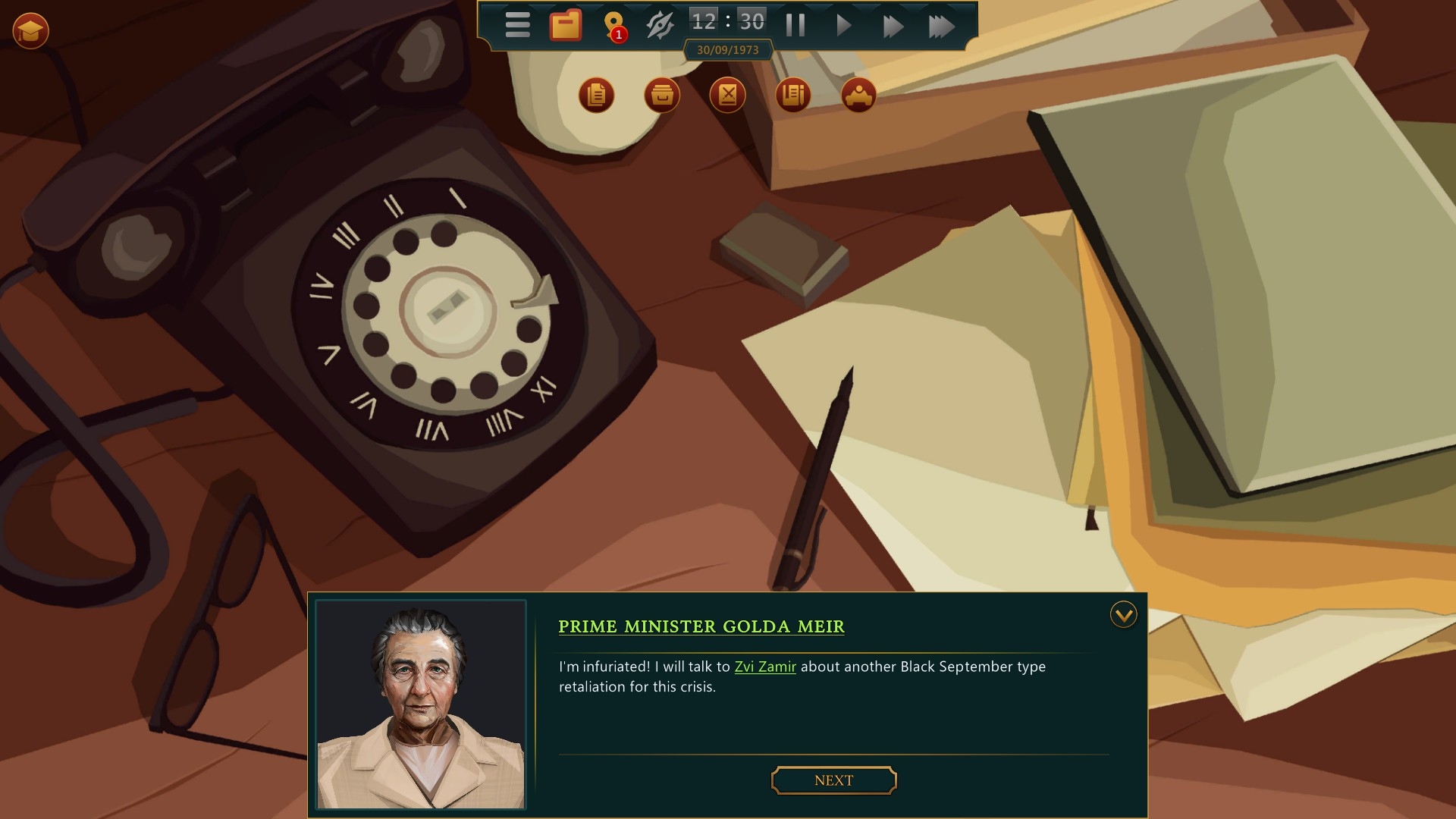 Here I am, a week prior to the outbreak of war, talking to Golda about an unfolding hostage crisis in Austria. How you choose to deal with situations like the Schoenau ultimatum impacts a range of variables that disregarded can create serious problems for you further down the line. Reading hyperlinked reports as they come in consumes a fair portion of an average day. Dismissing these sitreps without perusing them, makes informed decision-making that bit harder. Clicking on a link usually either takes you to a page in the game’s sizeable integrated encyclopedia or to one of the divisional counters on the map. 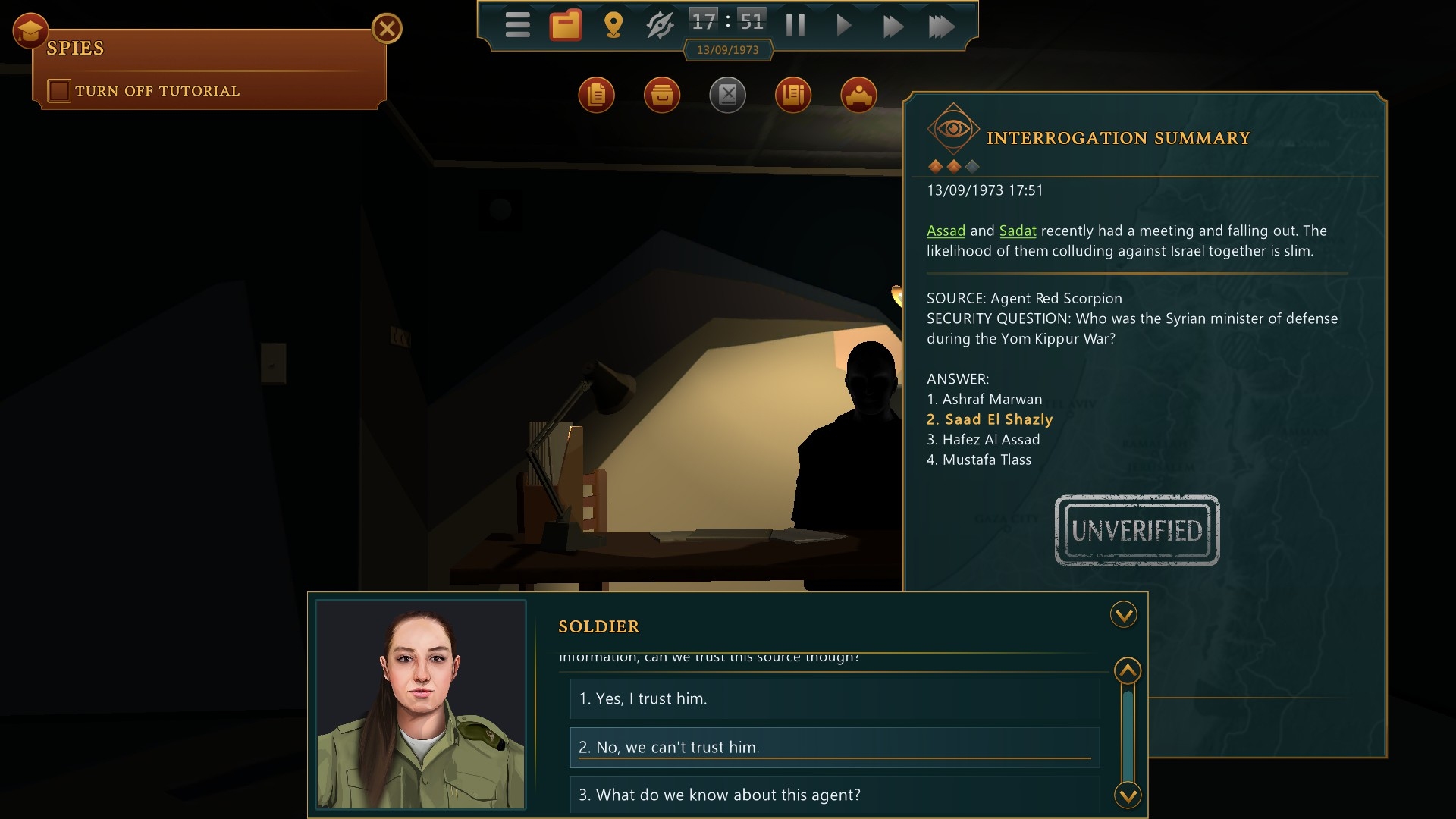 The Polish devs (the creative leads, Hannah Samira & Daniel Wencel, hail from the US and Israel) aren’t ‘mini game’ enthusiasts it seems. Besides the slightly silly general knowledge questions used to verify the trustworthiness of the various spies who periodically supply intel, there’s no attempt to abstract or stylise situations. ‘Analyse available info then choose a course of action’ is the straightforward Sagger way. 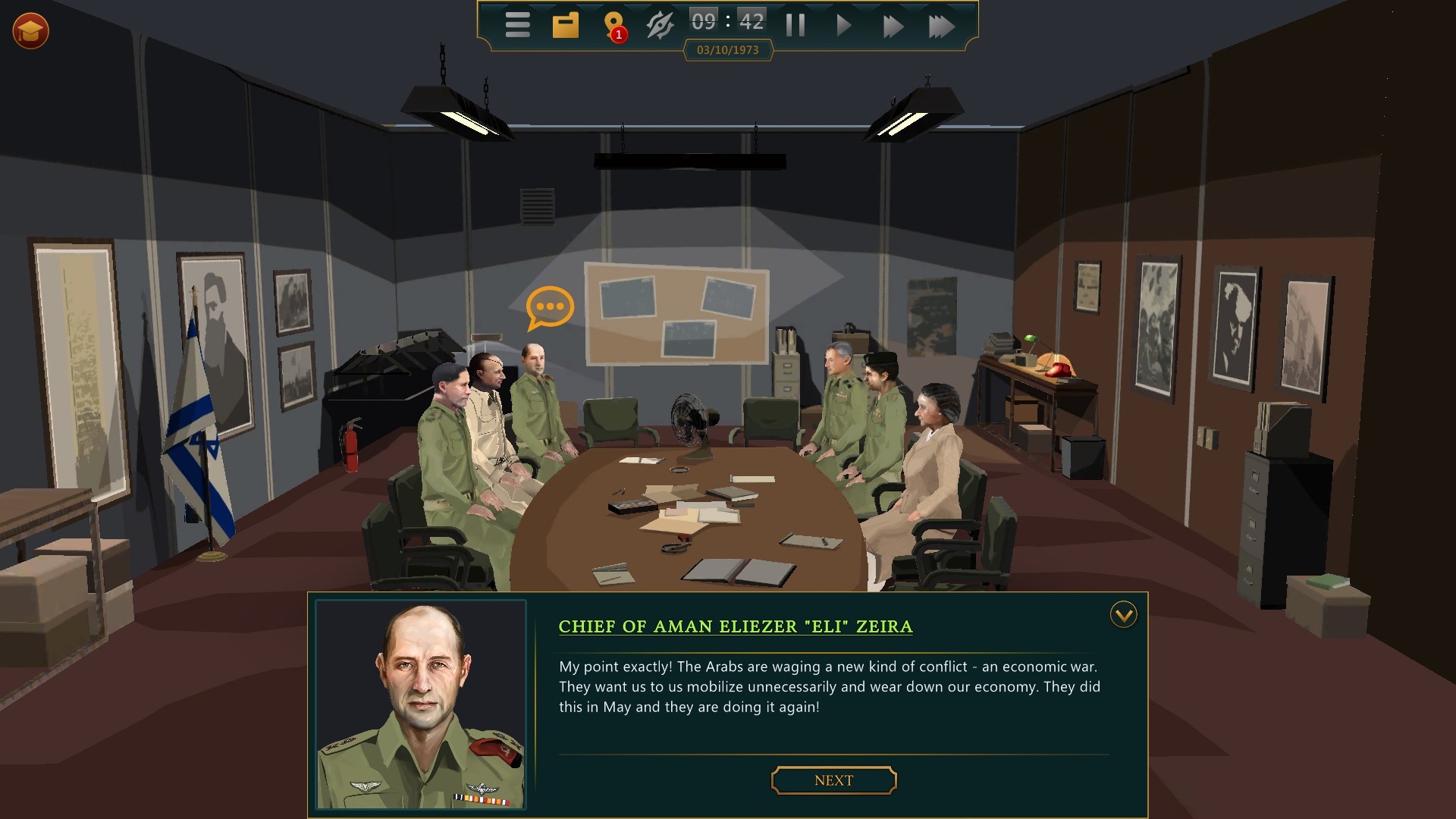 Regularly you find yourself sharing a conference table with historical figures such as Moshe Dayan, Benny Peled, and Eli Zeira. Israel’s path to victory in October 1973 was far from obvious and this is reflected in some pretty combative debates in ‘The Pit’ – the IDF’s underground nerve centre. There to listen, learn, and assess rather than raise the temperature further, often you’re presented with a decision dialogue at the end of a pow-wow. 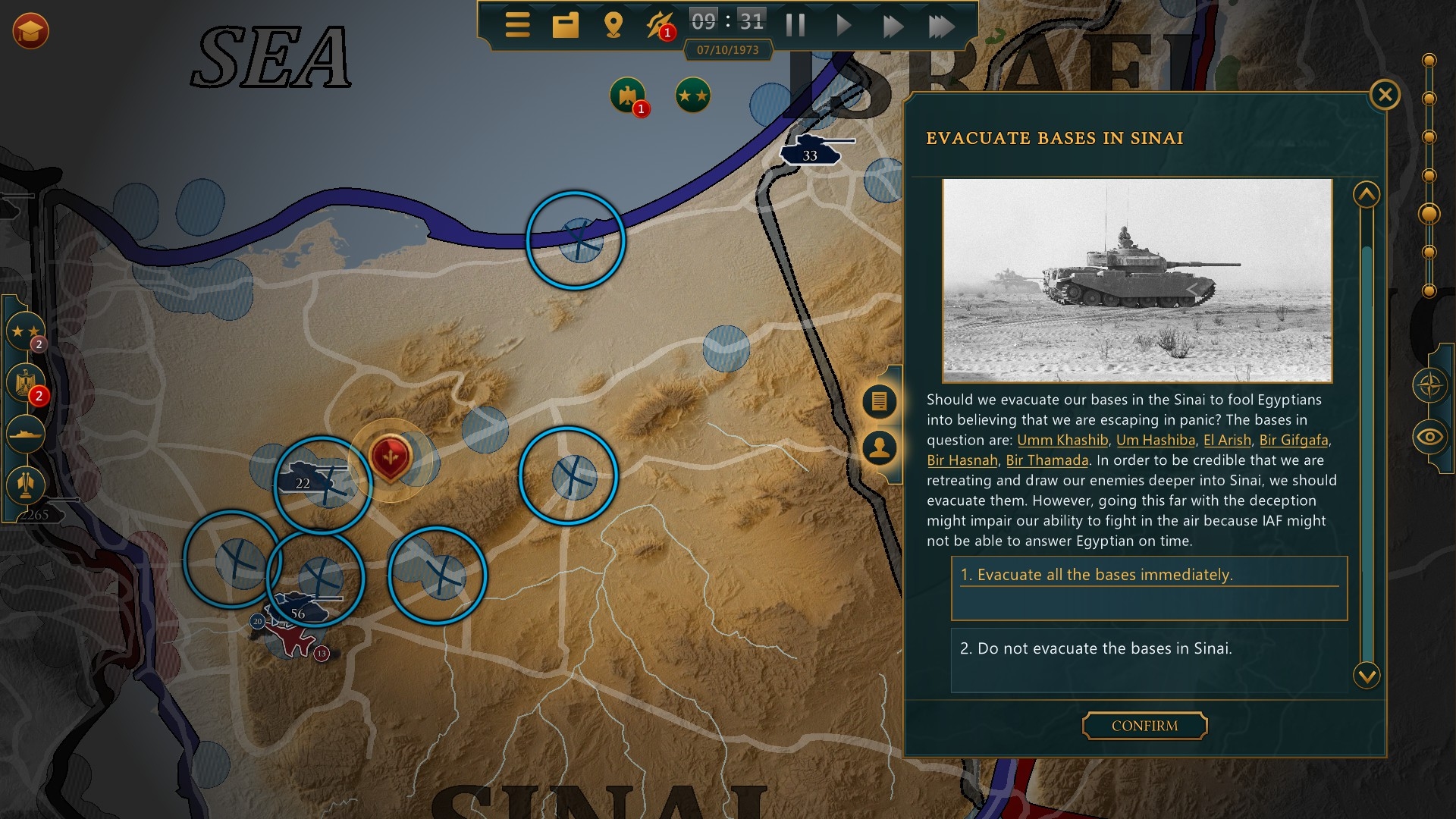 Usually decisions relate to a particular area of the front or aspect of the war effort. How many aircraft do you want to commit to CAS in the Sinai? Are you willing to greenlight Benjamin Telem’s latest raid on the Syrian coast? Do you wish to send Egoz to Banias or should they stay in Kiryat Shmona? 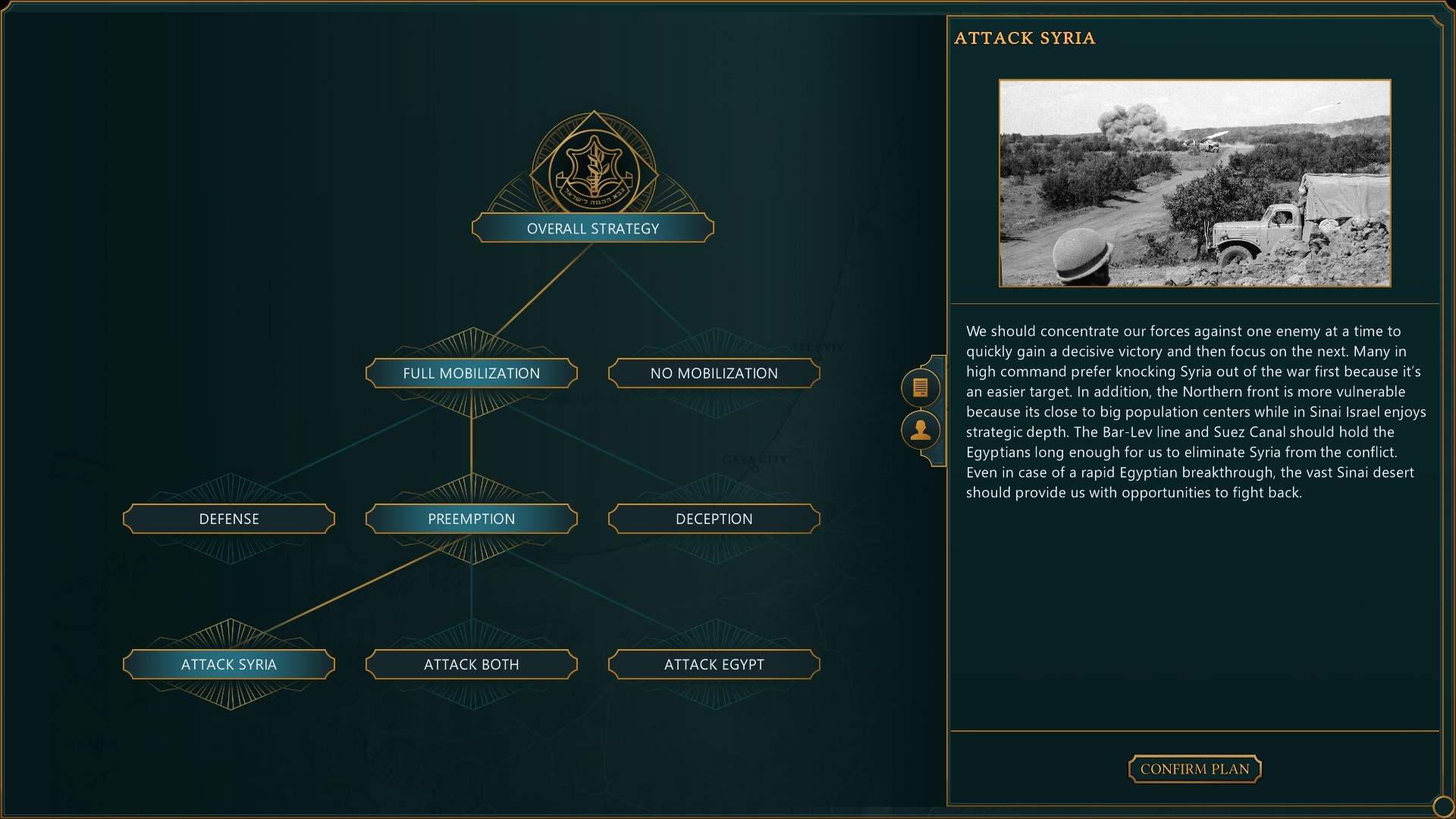 Only once or twice are you asked to make a major strategy call. 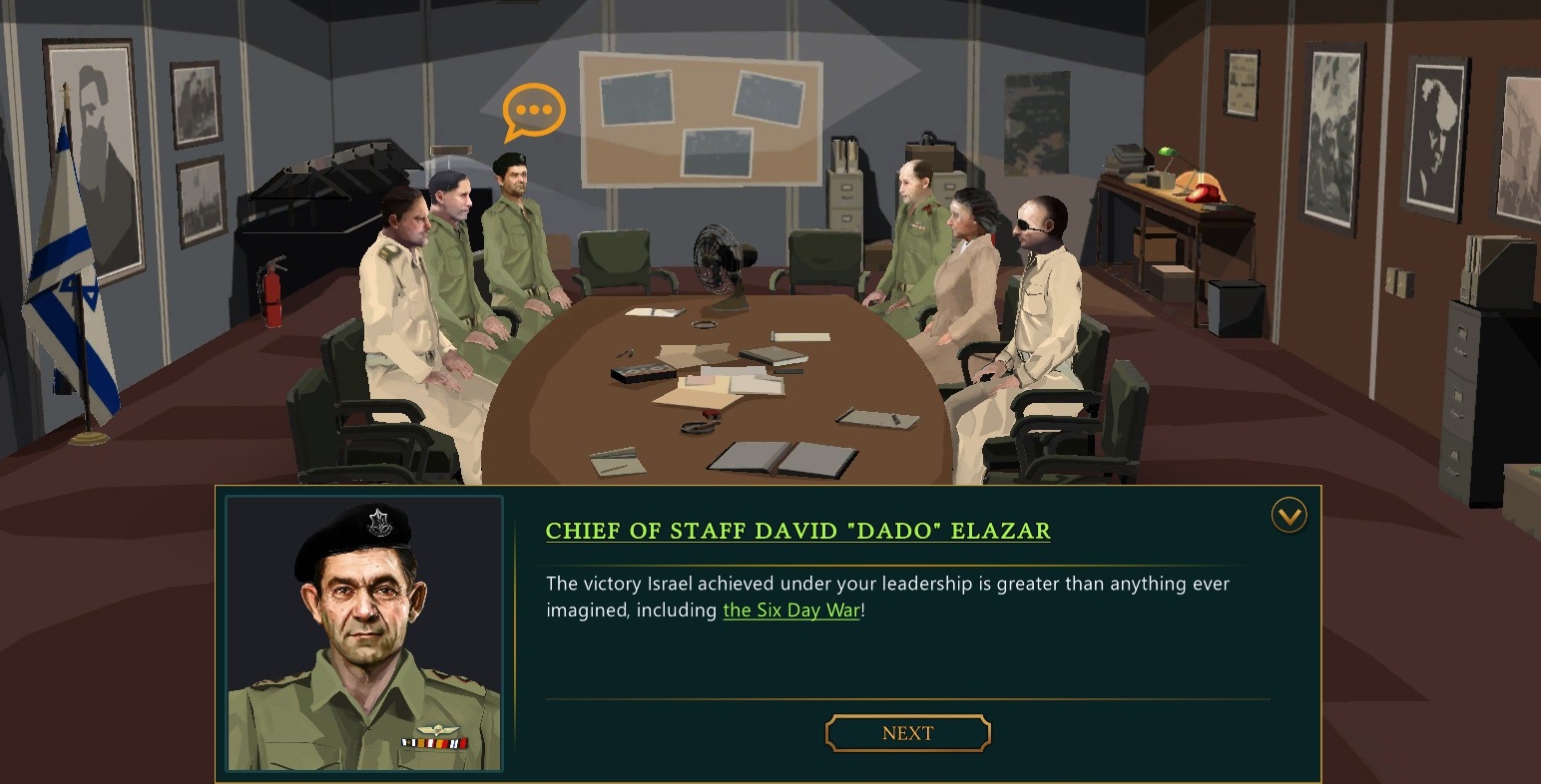 My first playthrough took approximately seven hours and ended in a convincing Israeli victory. How much of my success was down to prior knowledge of The Yom Kippur War, how much to groggy instincts or luck, I really couldn’t say. 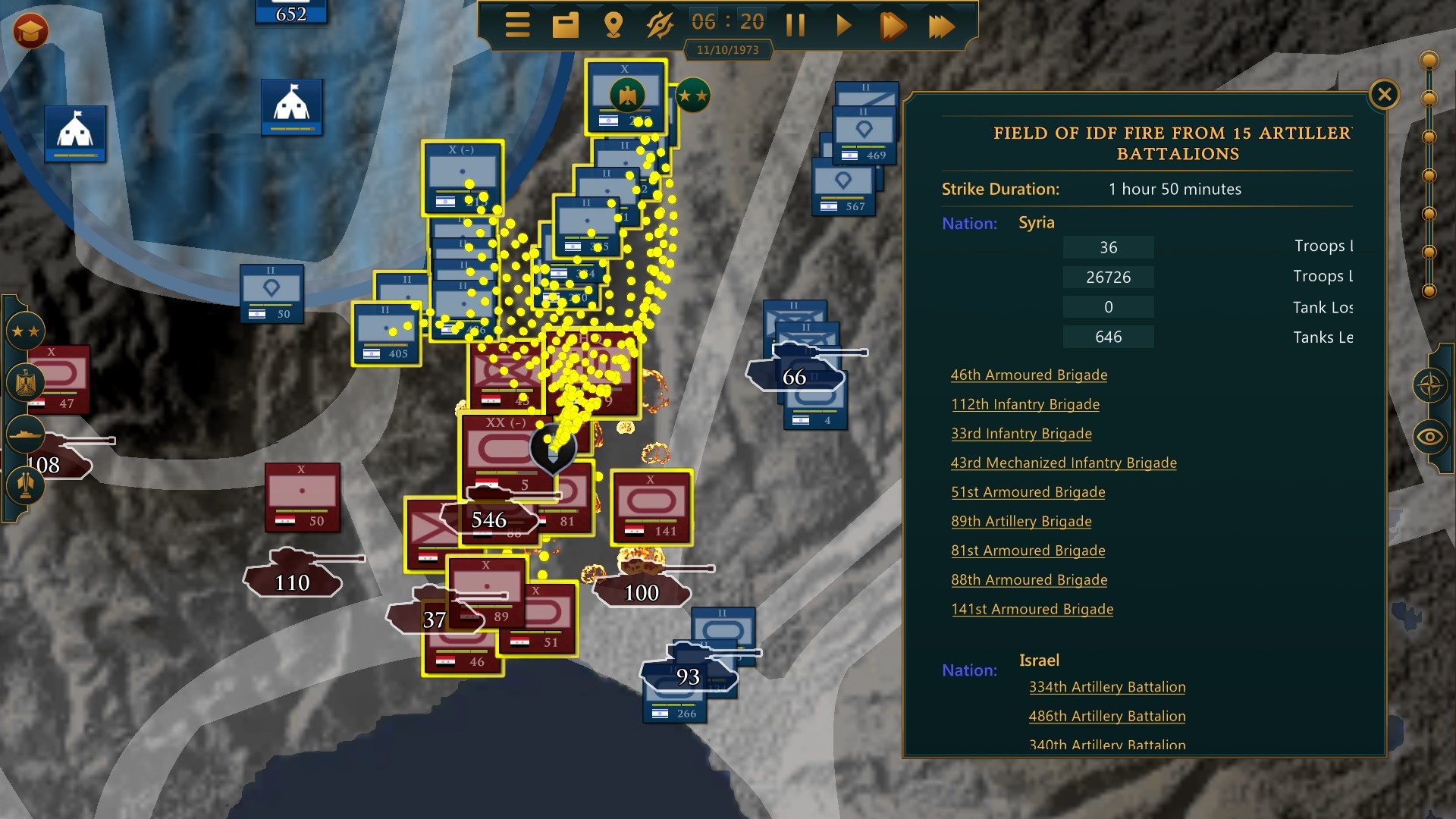 While I’ve already  ‘beaten’ Saggar, I don’t, by a long chalk, feel I’ve seen everything it has to offer. My Yom Kippur War ended a week and a half before the actual conflict ceased (Oct 25). If I’d pursued a different, less **REDACTED** approach, the fighting may well have dragged on longer (the in-game calendar runs to the end of November). It may even have escalated nastily. Israel had nuclear weapons at its disposal in ’73, and at various points during the conflict had potentially incendiary brushes with Soviet forces stationed in the Eastern Med. The possibility of Egypt and Syria’s quartermaster actively intervening in the War was unlikely but not unthinkable, and MAGS have modelled it just in case. 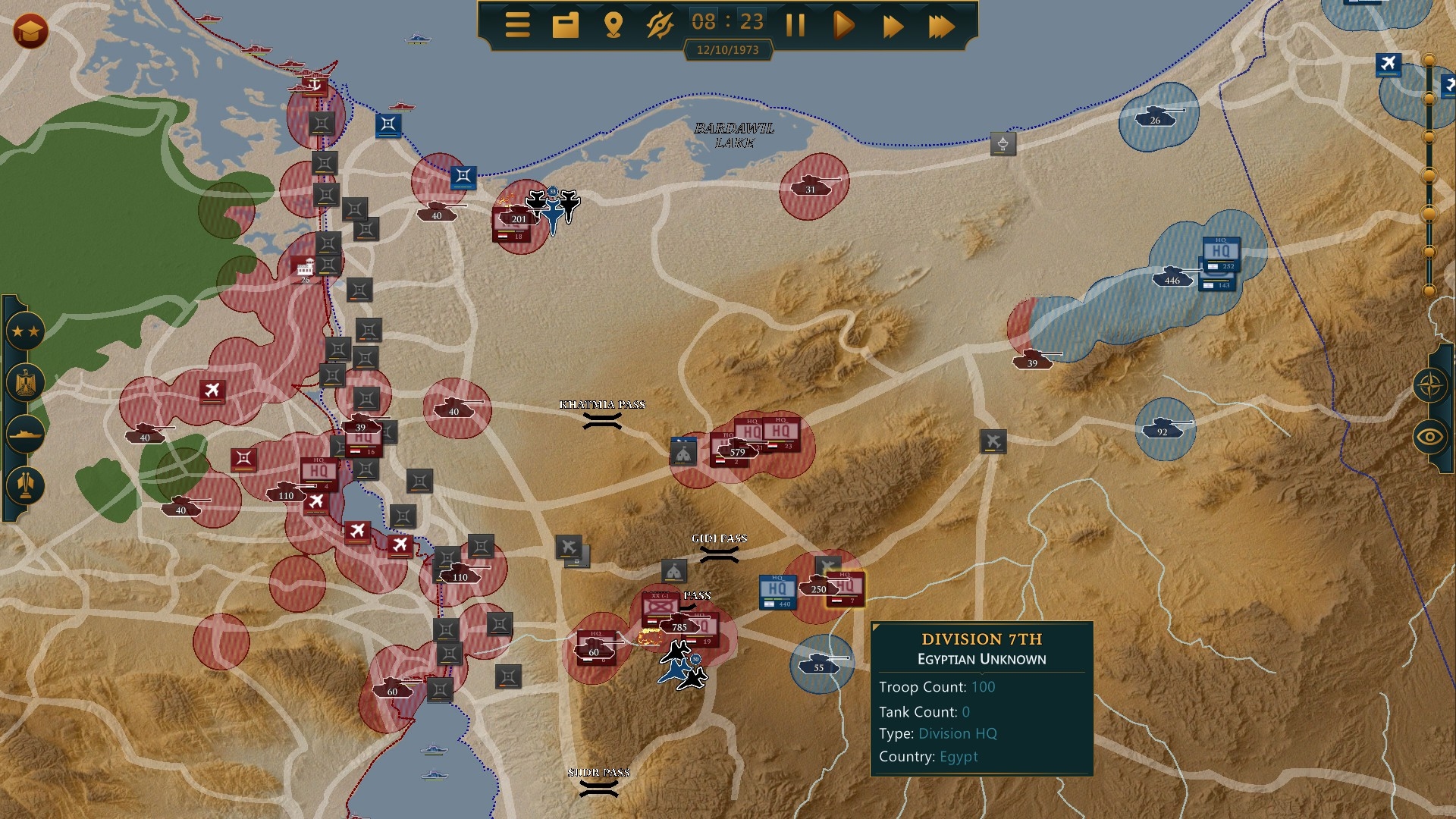 For me there are two main inducements to replay. Watching the war unfold in pauseable, adjustable real-time on the theatre map is genuinely mesmerising. I’d jump at the chance to experience other conflicts and campaigns in a similar manner.

Another reason for a re-run is Sagger’s rich repository of historical info. If you’re already intimately familiar with the fourth Arab-Israeli War, there’s little incentive to linger over the pithy descriptions of events people, weapons, and theories that pepper the game’s plastic narrative. However, if, like me, you only know the basic facts and can only put names to a few of the key characters, there’s plenty amongst the numerous photo and film-illustrated texts to catch the eye and raise the eyebrows. 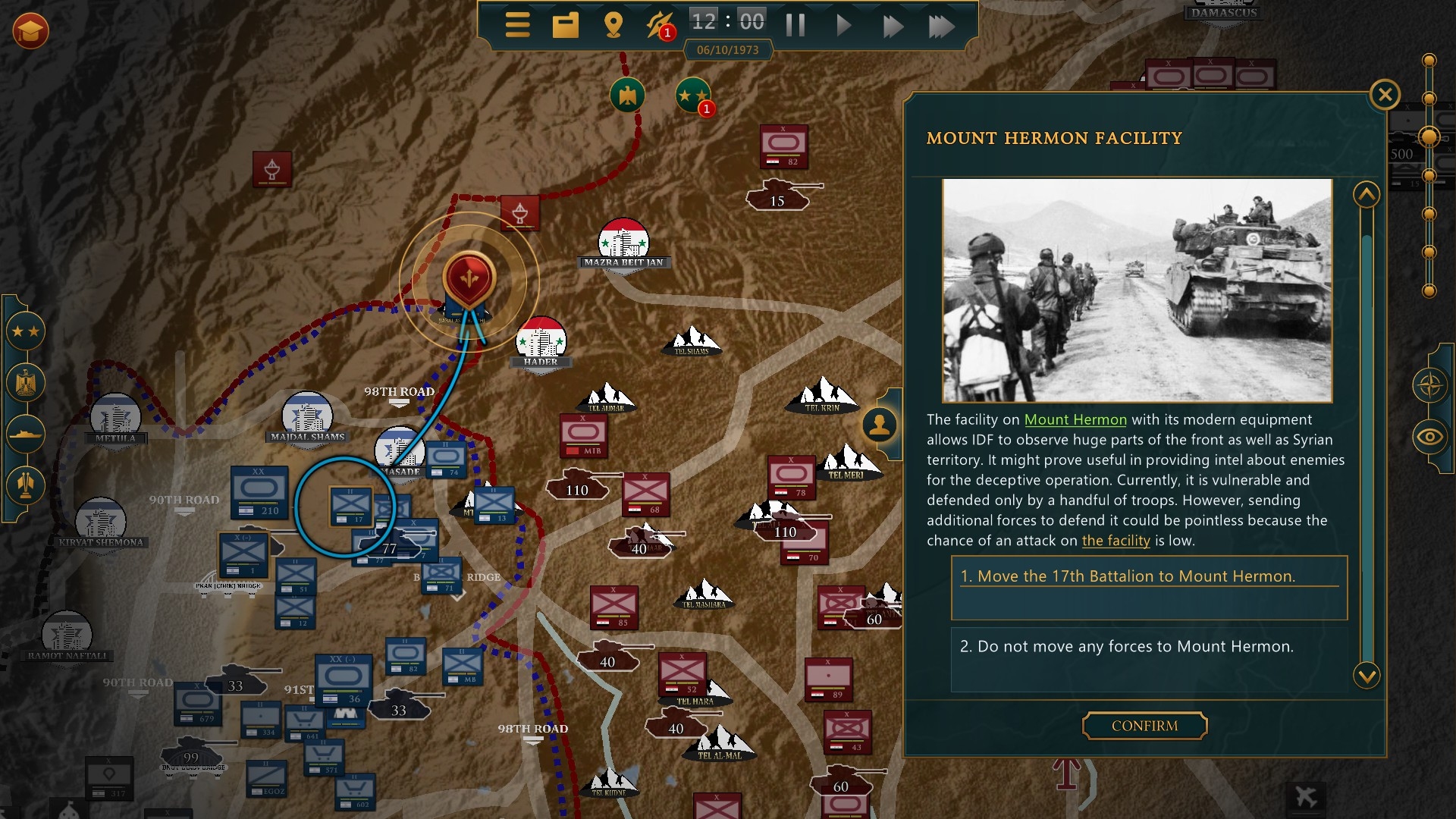 Prior to Sagger, I’d never heard of ‘The Concept’ or ‘The Blue-White Alert’. I had no idea that the conflict had involved Iraqi forces and Scud missiles. I didn’t know it mirrored the current war in Ukraine in several striking ways,* and had almost derailed the career of a certain Margaret Hilda Thatcher.**

* The unexpectedness. The role of wire-guided AT missiles. The staggering number of tank captures. The use of energy as a geopolitical weapon…

** Thatcher isn’t actually mentioned in the game. I stumbled upon the link while doing some fact checking. 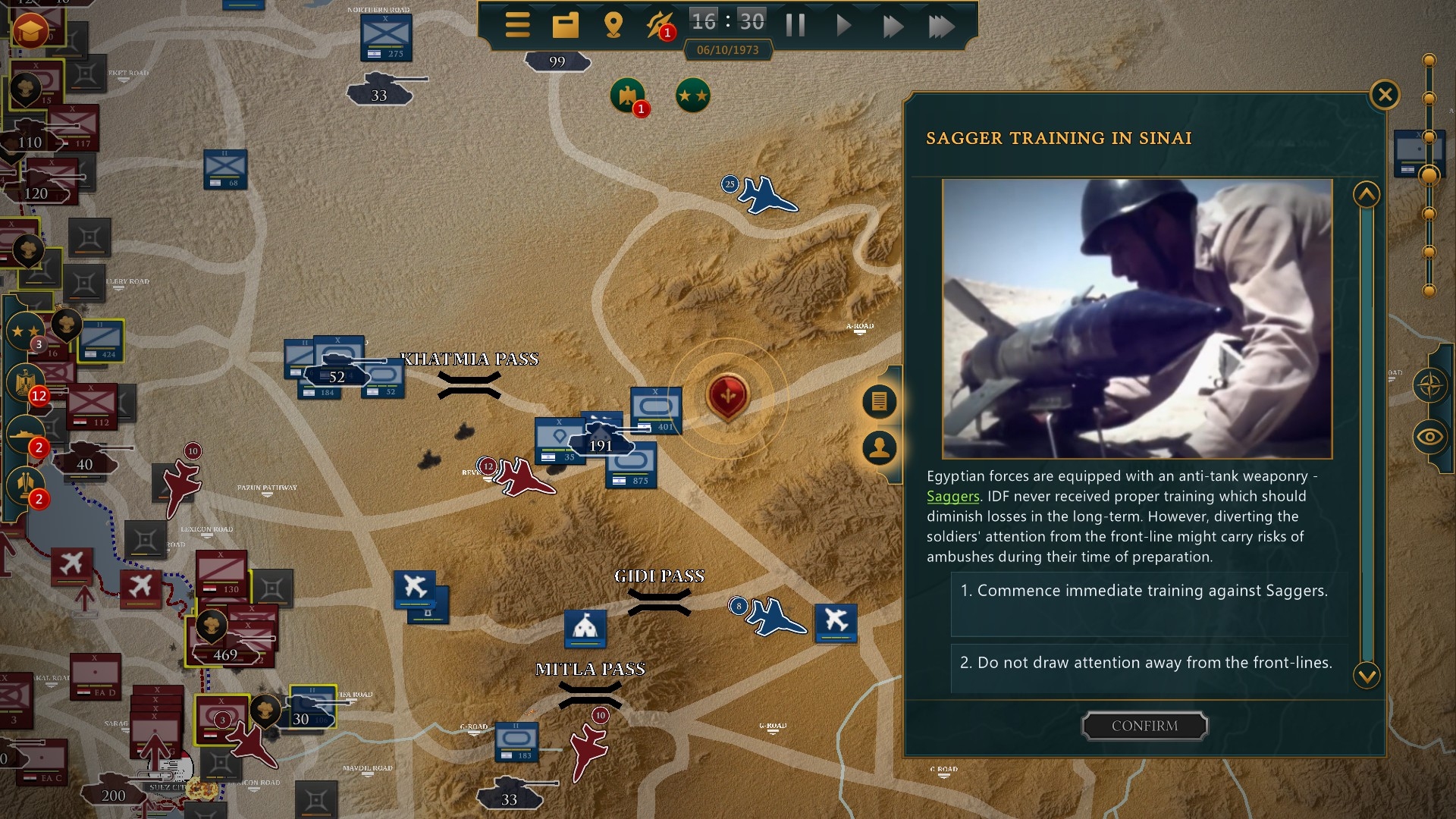 Will Sagger’s version of history infuriate anyone? Until I’ve read every text and experienced every possible plot twist, that’s a tricky question to answer definitively. Although the story is told from an exclusively Israeli perspective, I detected no obvious bias or whitewashing during my march to victory. In fact, the two incidents/exchanges that felt most improbable to me (both related to the treatment of Arab POWs) painted the Israelis in a less than flattering light. 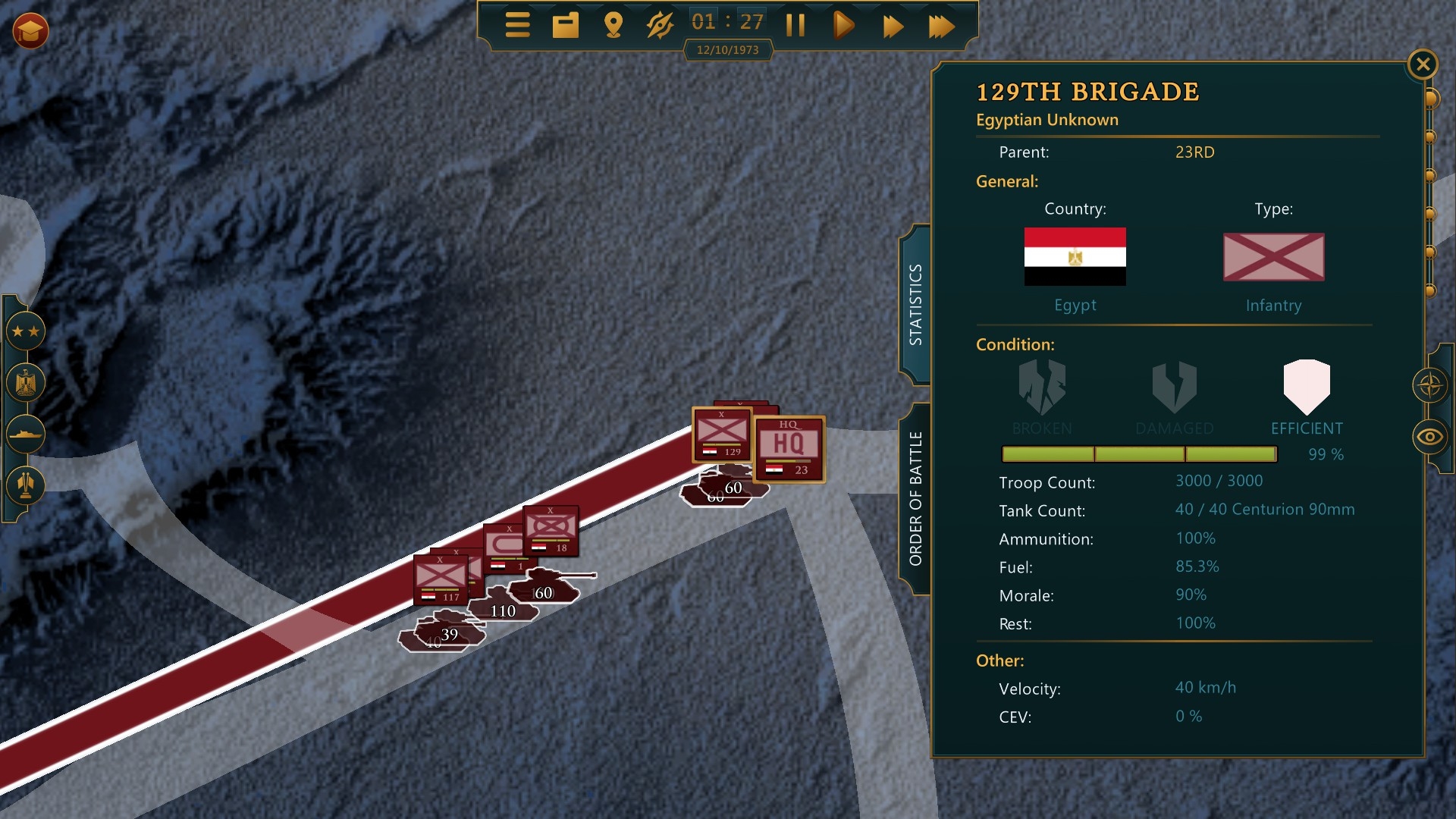 The only historical distortions I’ve noticed in Sagger are the inadvertent, insignificant kind. In addition to a plague of typos and the odd missing text or picture, the seven-strong QA team failed to notice things like a rogue F-16 in one of the embedded videos and an improbable number of Centurion tanks in the Egyptian Order of Battle. In a game that ‘edutains’ as deftly as this one, that has been in development for so long, and comes with a £32 price tag, glaring gaffes like these are something of a disappointment.