To qualify for a ‘Dusty But Trusty’ article, a game must be old enough to vote in Nicaragua, buy tobacco in Djibouti, and make the beast with two backs in Nepal. More importantly, it must be demonstrably super, smashing, great, ace, wizard, bonzer, the knees of the bee, the testicles of the dog, and the whiskers and pyjamas of the cat. You don’t need rose-tinted pince-nez or a cutting-edge pixel pump to enjoy 24 karat golden oldies like… T-72: Balkans on Fire!*

Would Iron Warriors have achieved Dusty But Trusty immortality before the likes of Panzer Elite: Special Edition and Steel Fury if it hadn’t been masterfully modded a couple of years back? Possibly not, but remove the accomplished Gastello from the picture and this article was still only a matter of time.

Even now, when lucky tank simmers can T-72 in titles like Steel Beasts Pro Personal Edition and Gunner, Heat, PC!, there are excellent reasons to choose this dirt-cheap*, 17-year-old obscurity instead.

* Frequently available in sales for under a quid, it’s currently £4 on Steam and Gamersgate. 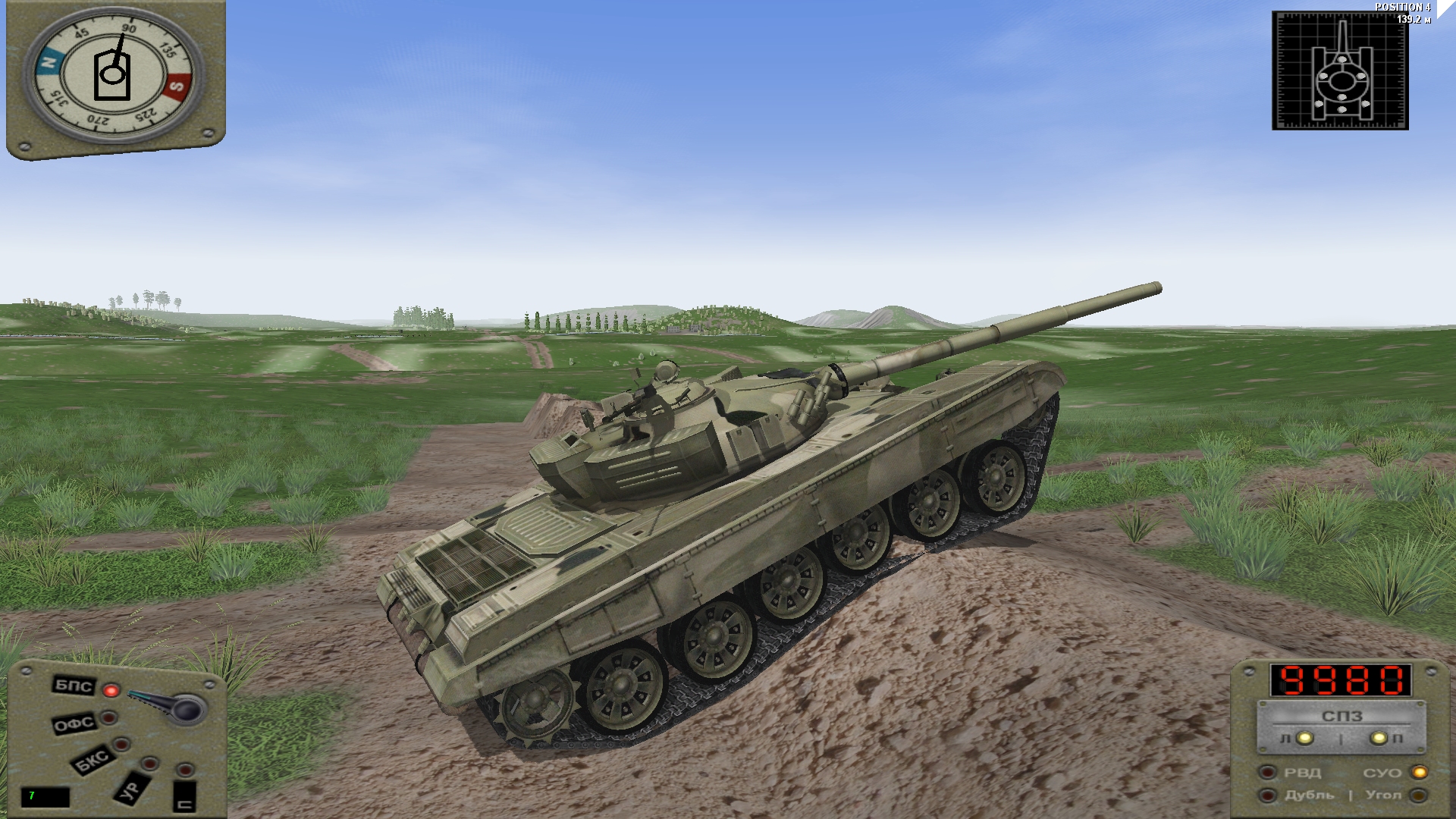 There’s the deliciously physical driving experience for a start. The T-72s in Iron Warriors lurch, buck, twitch and teeter exactly the way T-72s should. You can stall them by driving them into obstacles or by attempting to pull away in too high a gear. You can de-caterpillar them on fallen trees and other hazards. Cross-country perambulations that would be soporific in other tank sims are stimulating in this one. 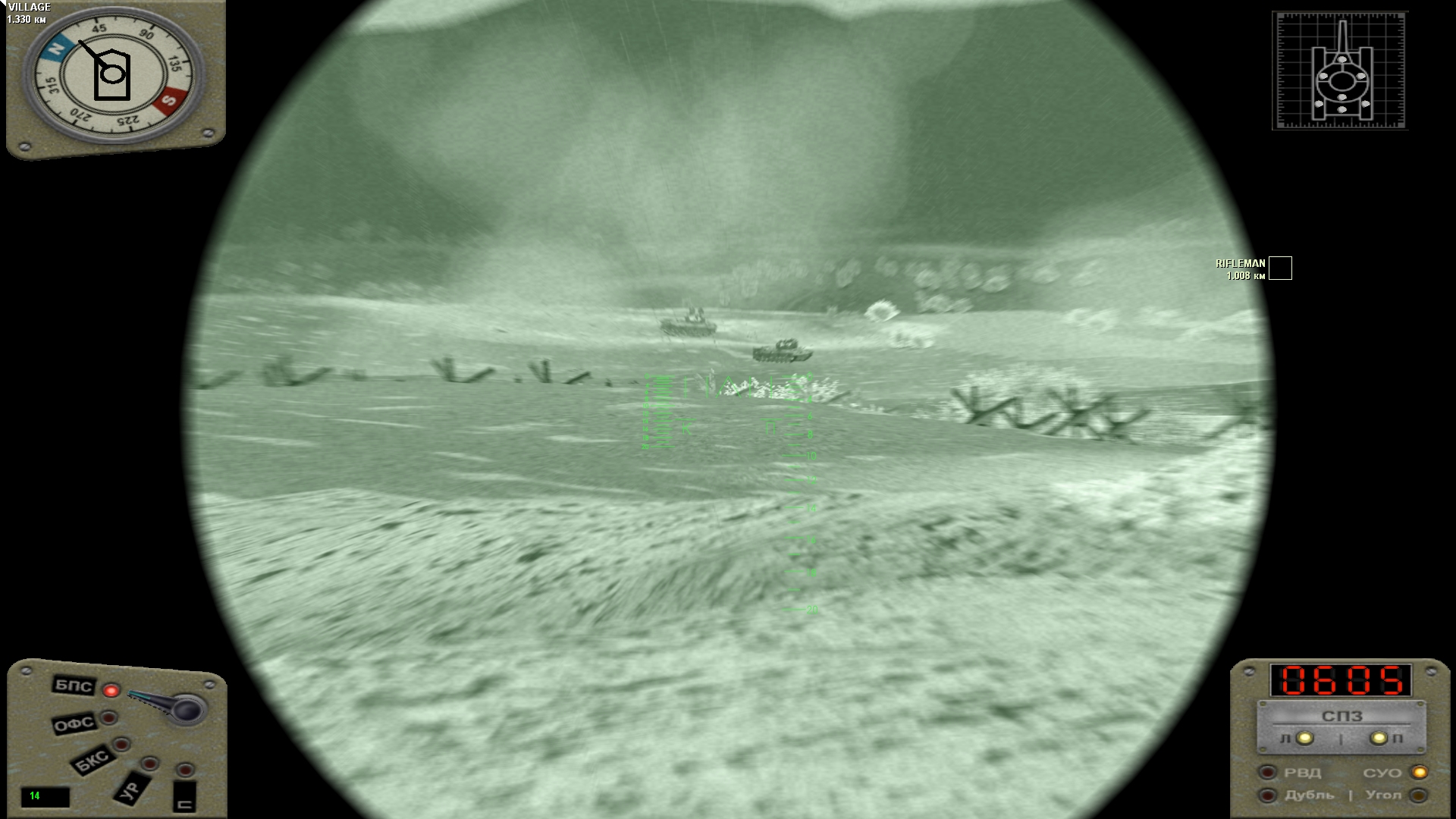 True, that probably has as much to do with the wrinkled ground surfaces as the plausible physics. Few genres benefit from close-knit terrain mesh more than armour sims, and, once modded, IW’s topgraphical wireframes can produce seriously lumpy battlefields.

Artillery bombardments and dozer blades make them lumpier still. The titular dyspeptic dacha is capable of digging its own scrapes. Deploy the necessary accoutrements (Ctrl+D) and drive backwards and forwards for a minute or two, and hey presto, you’ve got yourself a potentially lifesaving hull-down position. That pit in the image at the top of the page was excavated by Yours Truly in the lull before the Leopards loped over the hill and began slinging sabot rounds. 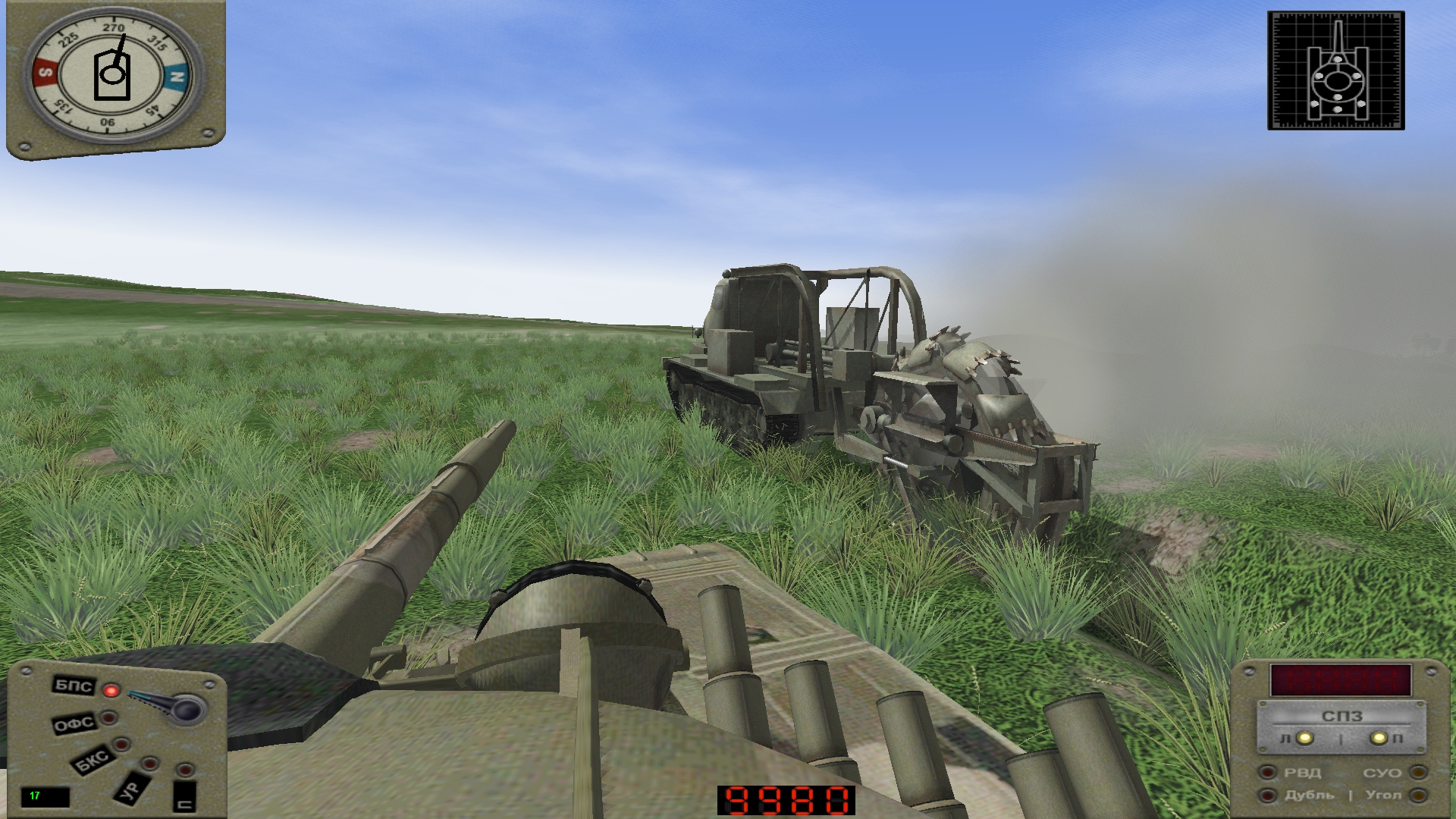 Understandably proud of their deformable terra firma, Russian dev Crazy House couldn’t resist adding a functioning BTM-3 ditch-digger to a couple of the missions. Beware – the sight of this bizarre contraption doggedly doing its thing is quite the distraction! 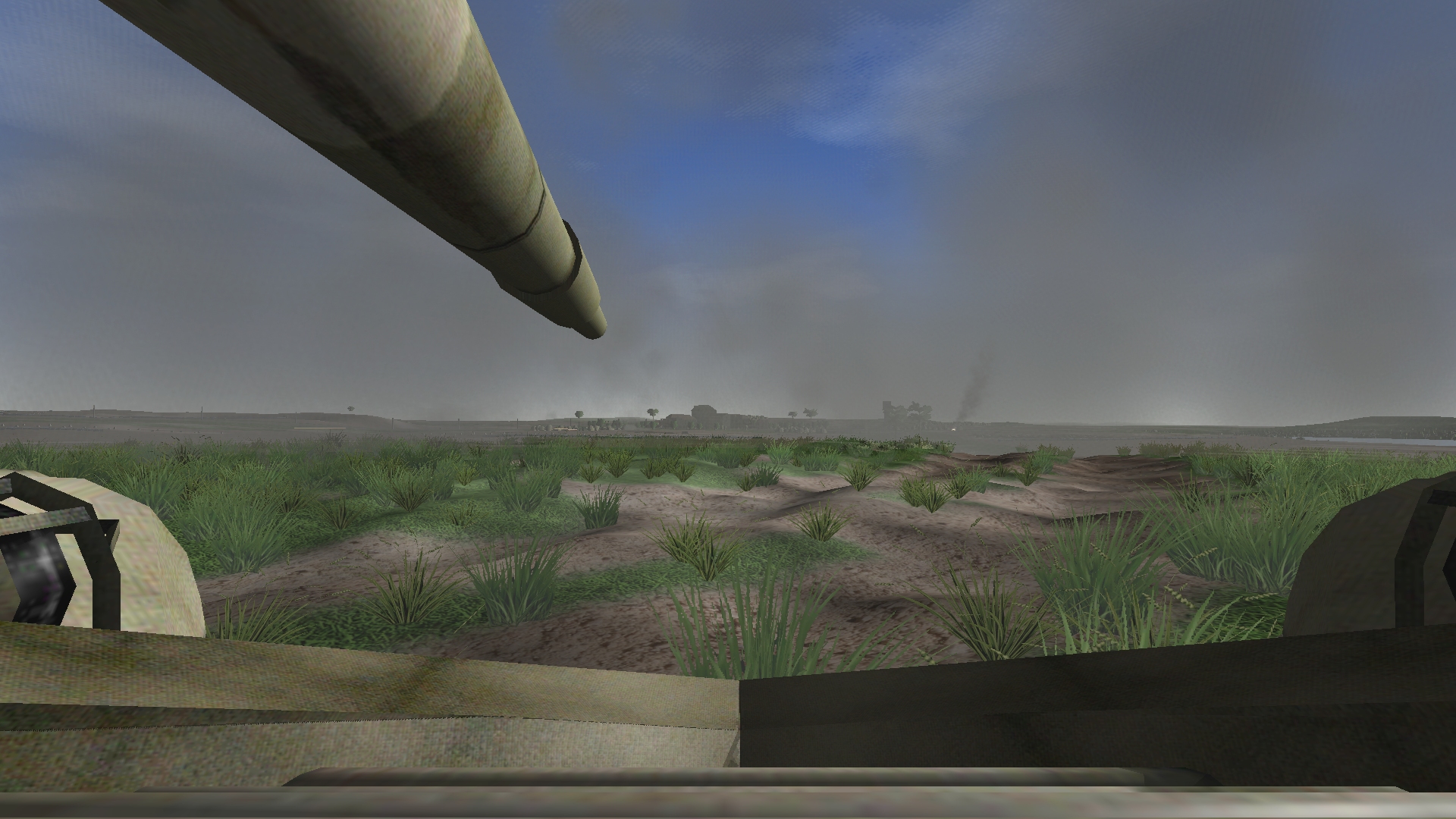 Iron Warriors is also rather adept at creating atmosphere. It works some of its magic with rain, mist, and scant daylight. However, it’s billowing clouds of smoke and dust that do most of the heavy lifting. It’s not impossible I’m getting forgetful in my old age, but I can’t recall ephemeral LoS obscurants influencing the action in other armour sims quite as dramatically as they do in this one. One of IW’s signature experiences is peering into swirling murk, waiting for wind or gravity to thin the veil.

To their credit, Crazy House understood that there were and are more important things in tank games than finely fashioned interiors (of which IW has none). Things like visible infantry and detailed damage models. 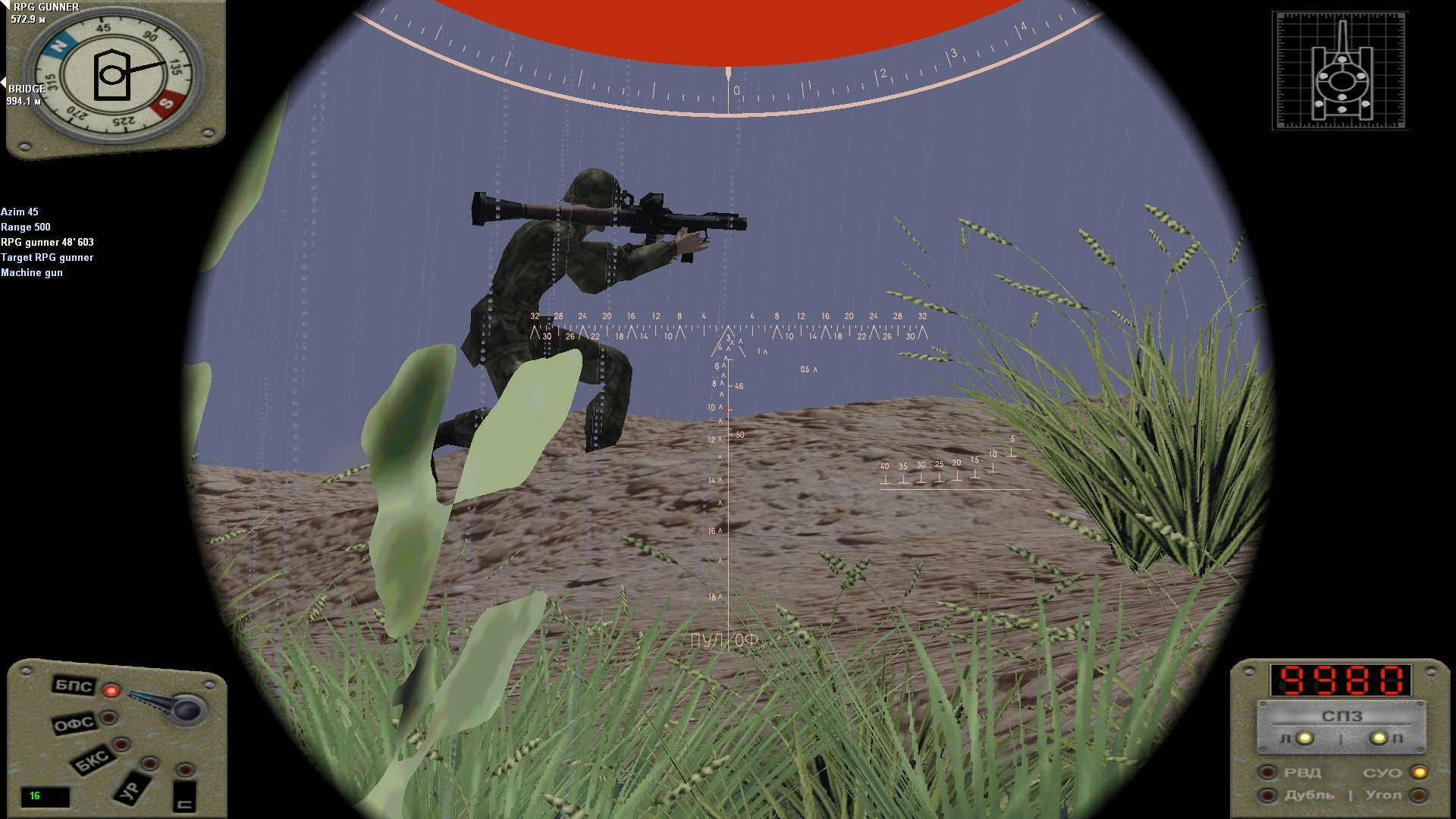 It’s rare a mission doesn’t feature MG fodder. You’ve little to fear from the men with the assault rifles (I don’t believe I’ve ever seen grunts hurl grenades or close-assault a tank). It’s geezers like the one pictured above that you ignore at your peril. 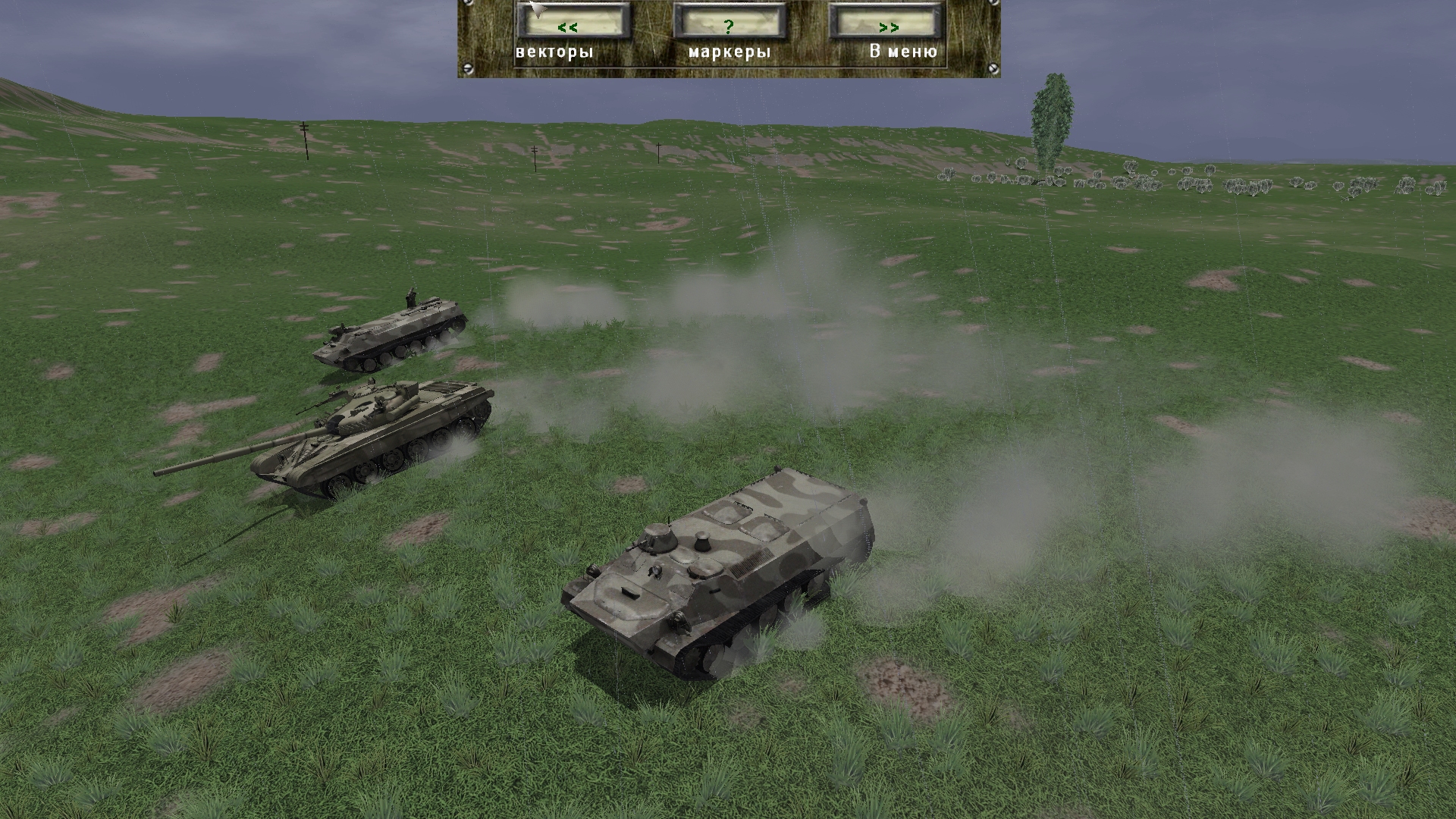 Unsurprisingly perhaps given the sim’s origins, the headline MBTs are pretty robust. The autoloader vulnerability exposed almost daily in Ukraine, isn’t, perhaps, as evident as it should be. Which isn’t to say that Crazy House have cut corners or deliberately deceived on the damage front. 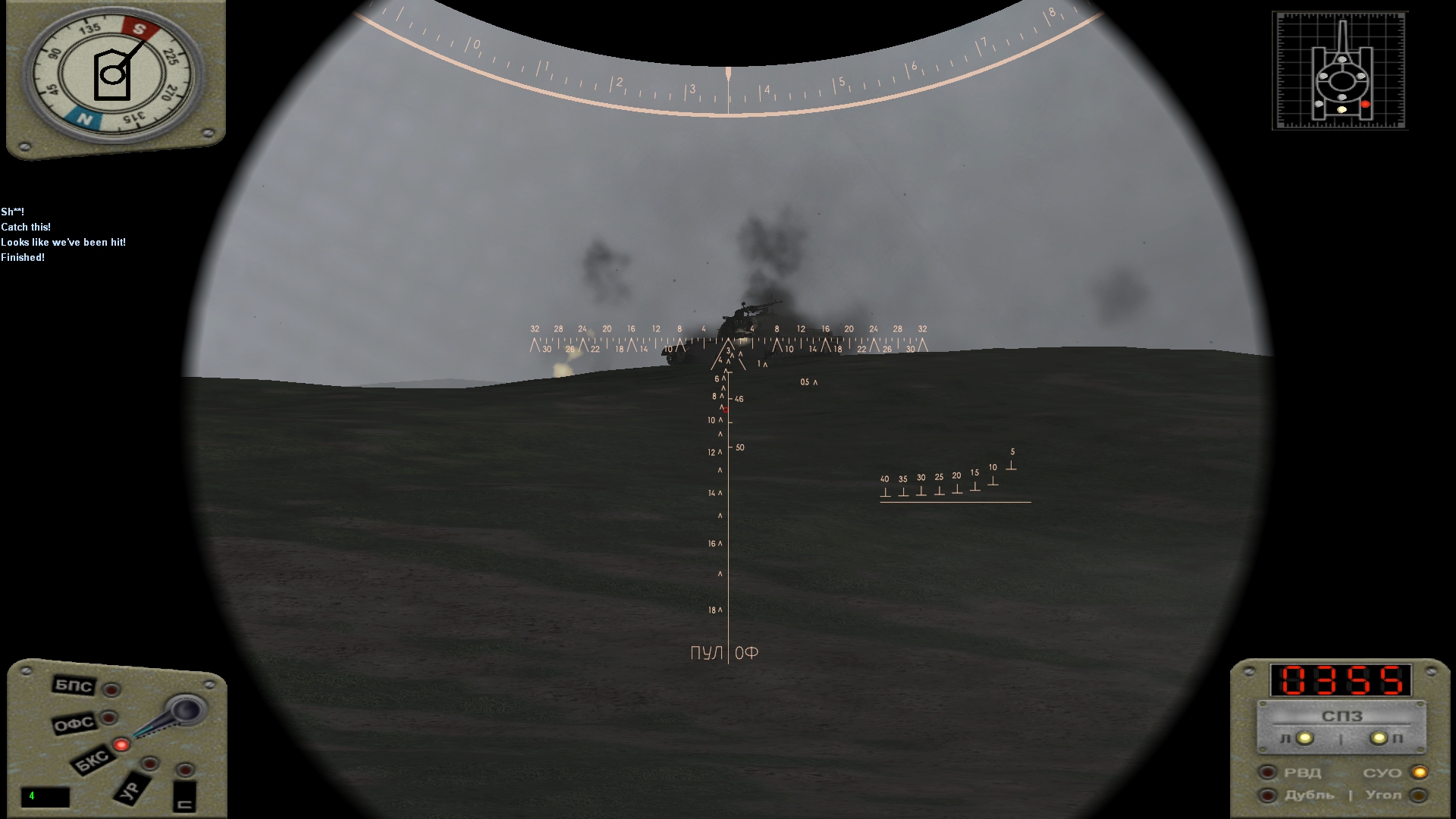 When the GUI dots (top-right) that indicate the health of crewmen and components are be-crimsoned by incoming rounds, there’s little chance you won’t notice. Depending on where your steed has been stabbed, reload times might increase maddeningly, your turret might become sluggish, or your steering alarmingly erratic. An uncontrollable pirouette is a sure sign you’ve lost one of your two rolling roads. Although, by default, broken caterpillars auto-repair in sixty seconds, masochists can choose to wait much longer if they wish. 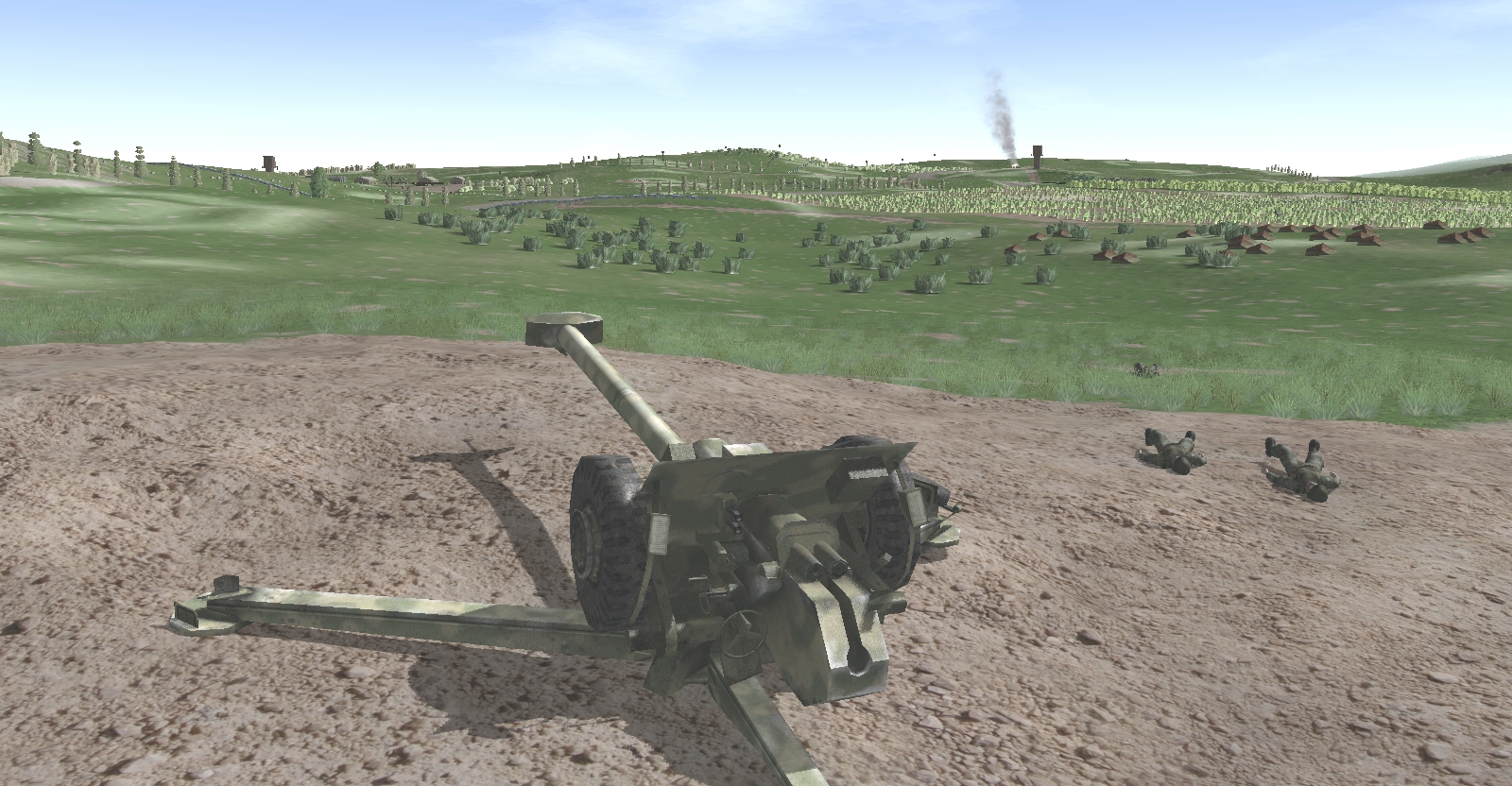 Ever hungry for novel settings and new experiences, I regard IW’s 1990s Balkan setting as a strength rather than a weakness. If you’re Croatian you may see things differently. The eighteen-mission campaign casts the player as a Russian volunteer fighting on the Serb side in the Croatian War of Independence. From memory, briefings, scenarios, and crew utterances, are free of politics and propaganda, but even so I doubt the game sold well in Zagreb.

One of the reasons sales weren’t fantastic elsewhere, may have been Crazy House’s approach to campaigning. Although varied and action-packed, the sim’s main attraction is as straight and rigid as a SU-100’s primary death dispenser. The win-to-progress mechanic is easy to grasp, but it can all too easily generate frustration, especially when the game’s wealth of difficulty customisation options aren’t obvious (Find and run cfg.bat to access them) and few realise there’s another way to access the story mode scenarios (Select ‘user missions’ then navigate to the CACHE folder. In my install: Program Files (x86) > Steam > steamapps > common > Iron Warriors > CACHE ). 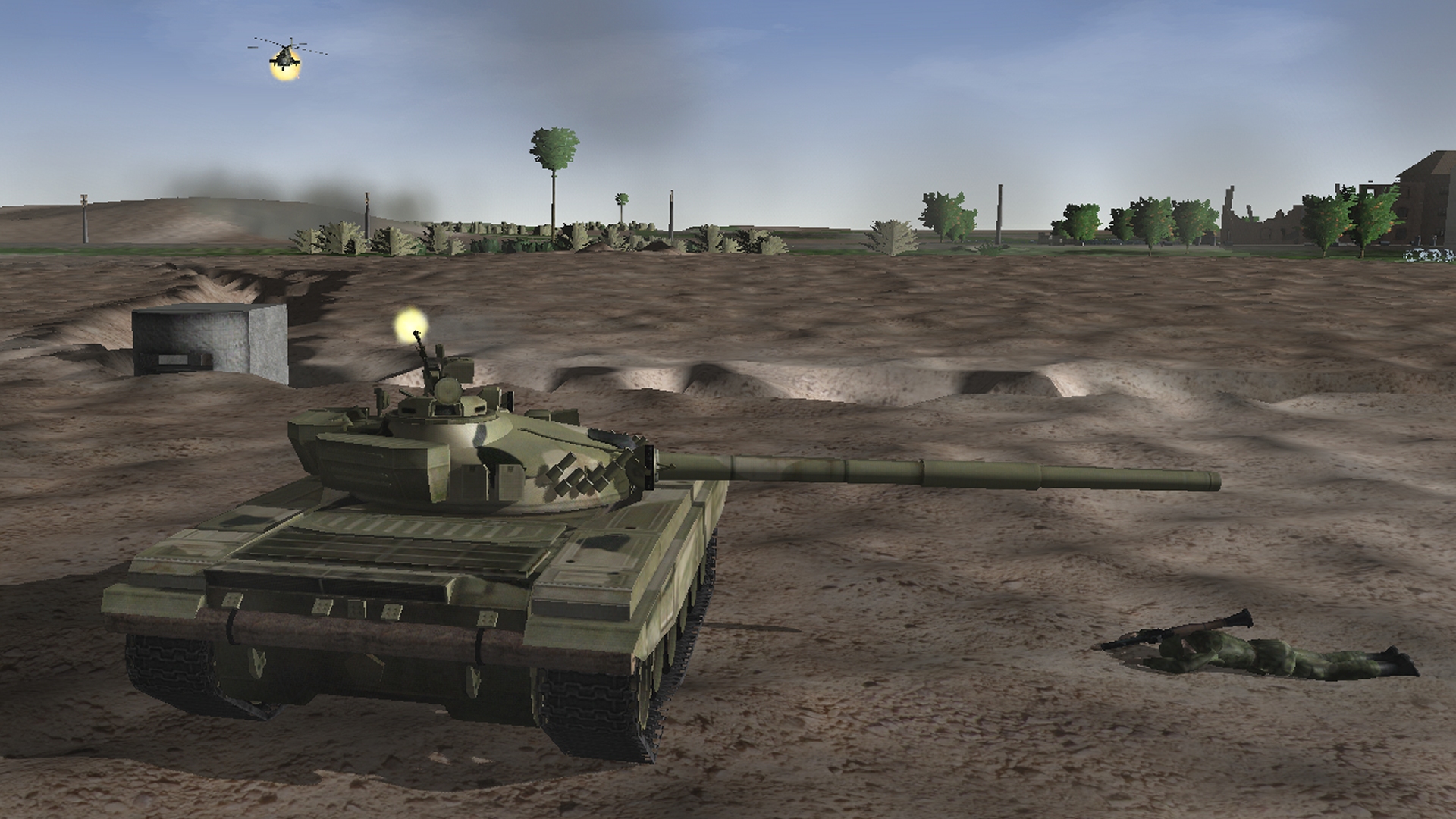 Impatient non-Russian speakers may have been deterred by the untranslated ammo selector panel and keyboard-reliant control system too. For some reason neither Battlefront.com or Strategy First, the two Western publishers, opted to use English abbreviations on the ammo GUI. For reference, in an unmodded install, BPS = AP, OPS = HE, BKS = hollow charge, UR = guided missile, and P = coax MG. 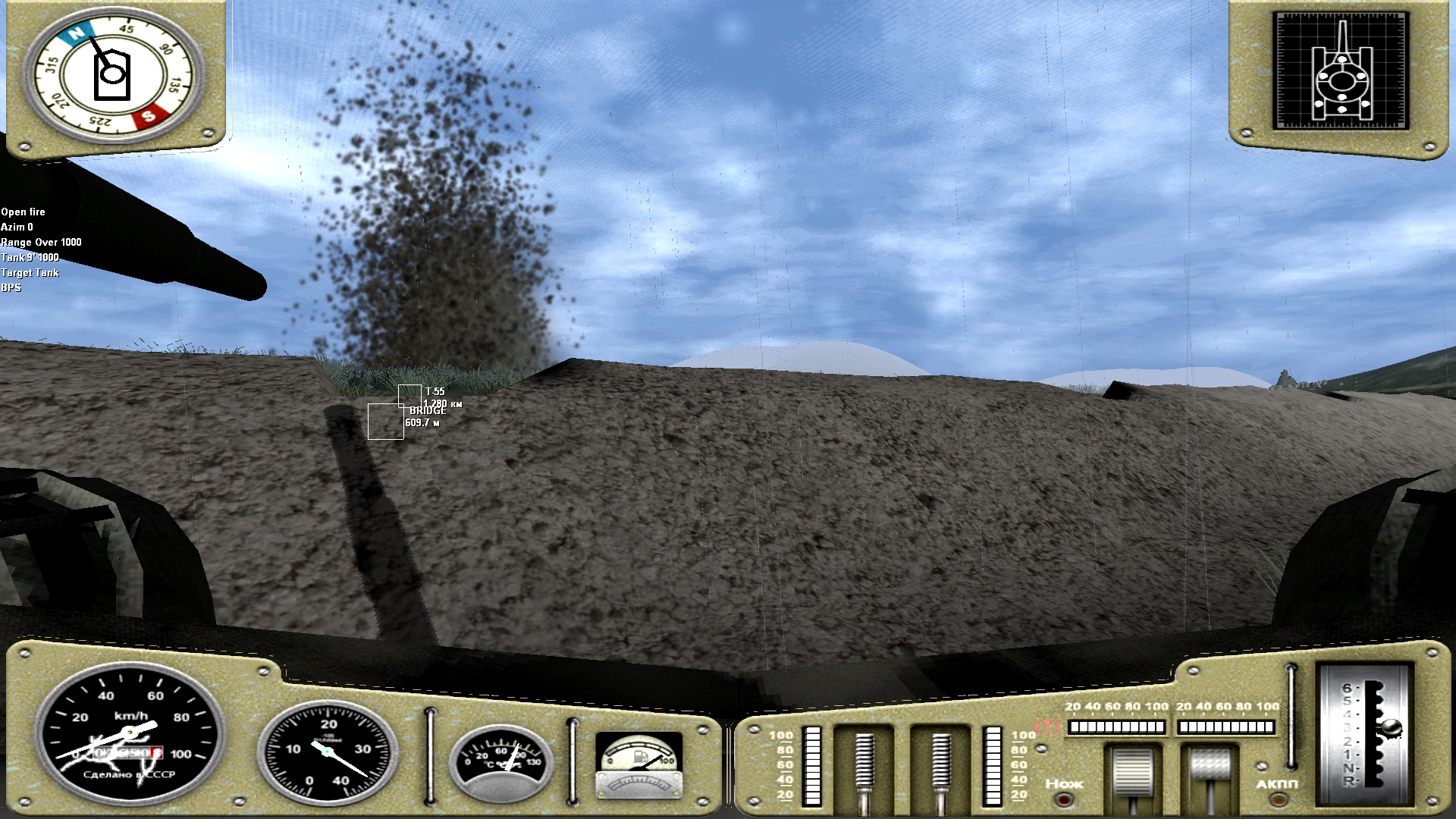 If you’ve never played before or are new to armour sims, I’d recommend remaining in the driver’s seat first time out. Assuming you dab ‘2’ and ‘3’ before getting underway (respectively, these inputs instruct the AI gunner to ‘fire at will’ and the AI commander to scour the landscape for targets) and remember to brake (‘B’) or at the very least slow down when enemies are sighted (obviously, your gunner will struggle to land shots if you’re going like the clappers over bumpy ground), you should do fine.

Sims this strong that come with powerful scenario editors, generally spawn stacks of tempting user-made missions. Either IW is the exception to the rule, or I’ve not stumbled on its scenario storehouse yet. If anyone reading this knows the whereabouts of a cache of extra engagements, please enlighten me. 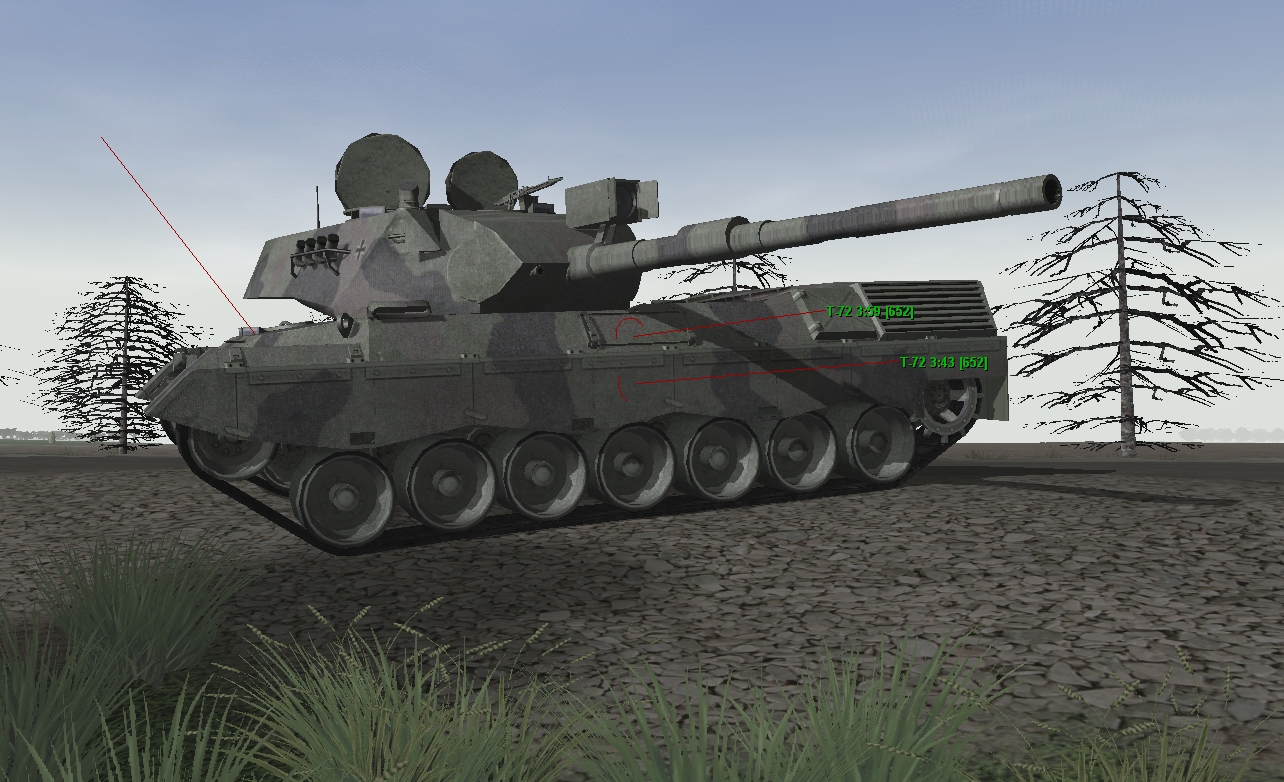 As the released-on-Tuesday Attack at Dawn won’t review itself, once I’ve pointed out that…

…I think I’ll call this Dusty But Trusty done and dusted.