Want to turn a green lane into a brown lane, tow a Gulaschkanone across a snowy field, or roam the Western Desert trashing Axis airfields? Get a 4×4. Want quick introductions to recently released games of interest to wargamers and simmers? Read a 3×3. Prior to penning one of these articles I’ll play three tempting newcomers for three hours each. While it would be cavalier to call the reports that result from such brief auditions ‘reviews’, it’s conceivable they might lead to more prolonged playtests, and prompt or prevent the odd purchase. 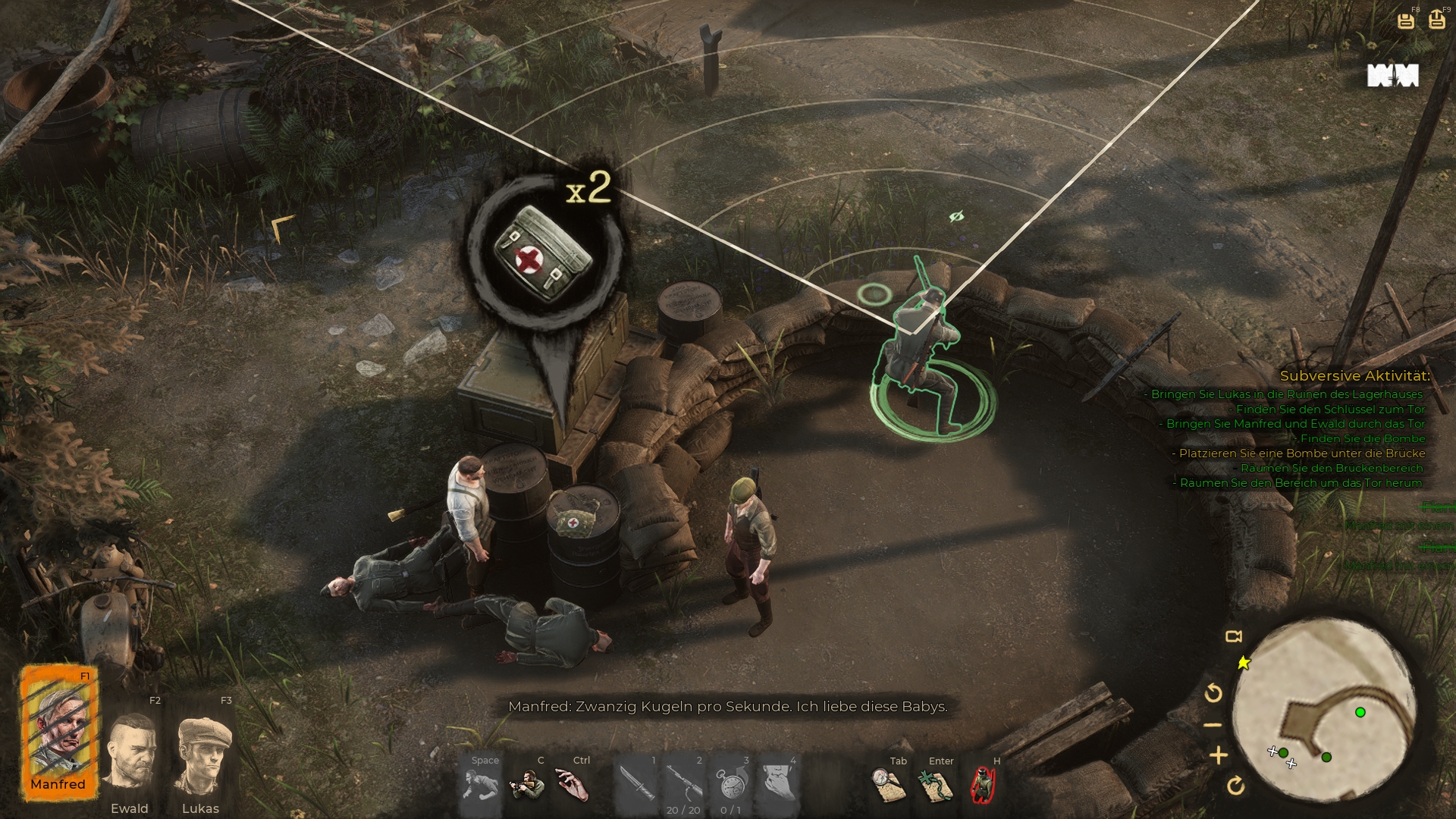 Bah Hummelbug! War Mongrels’ most aggravating annoyance can’t be removed by selecting the Polish flag in the language settings. I was hoping I could play this very acceptable (assessment based on three hours’ play!) Commandos substitute in the mother tongue of its developer, Destructive Creations, but switching languages only changes the in-game text. The utterances of my sneaky German and Slav sentry slayers are still voiced by inappropriate American and British thespians struggling with clumsy English translations. 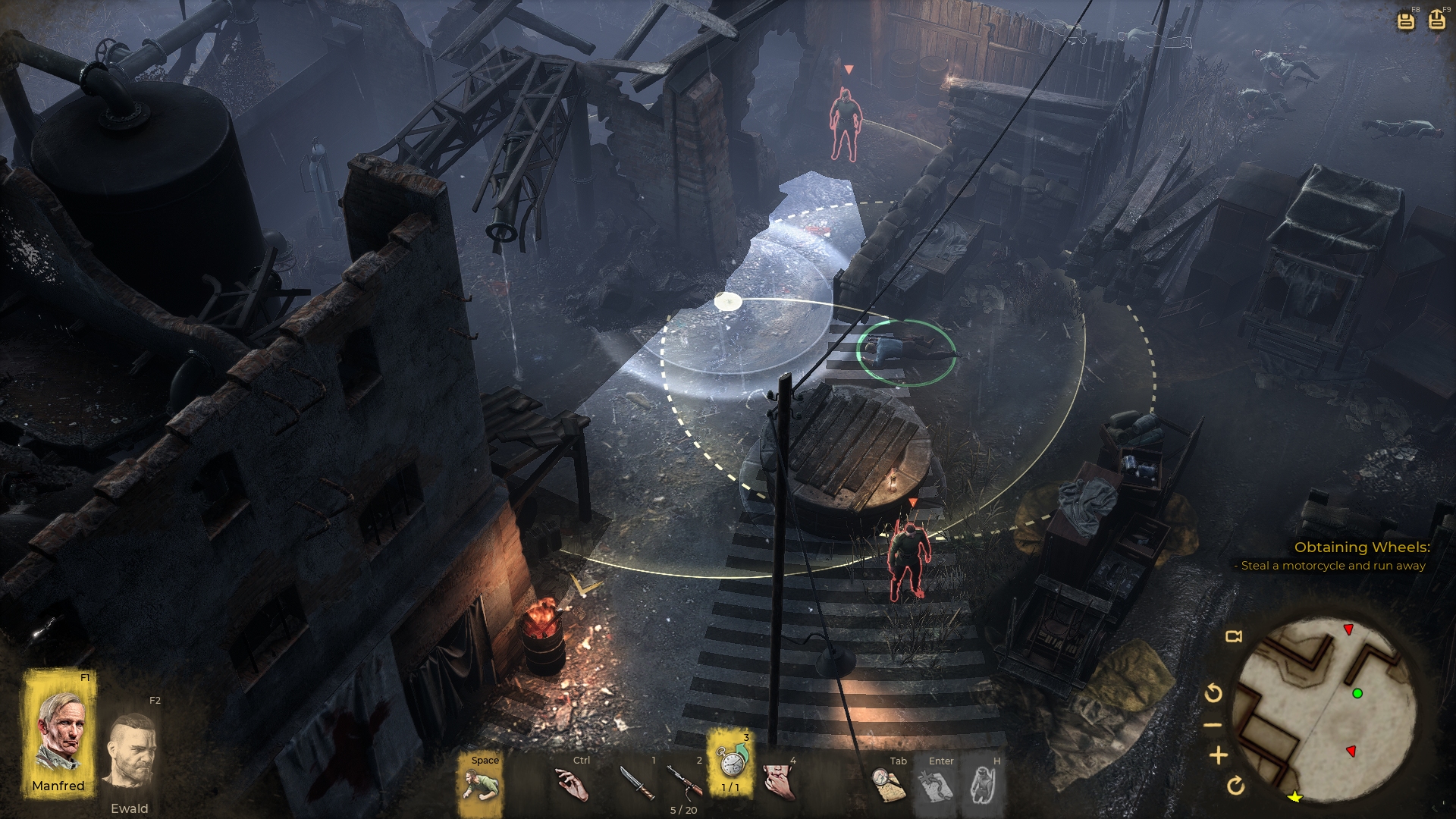 Kalypso Media, the torpid, timid owner of the Commandos brand, isn’t going to like the thunder-thieving War Mongrels, but my brief blooding suggests avid Pyrophiles will. 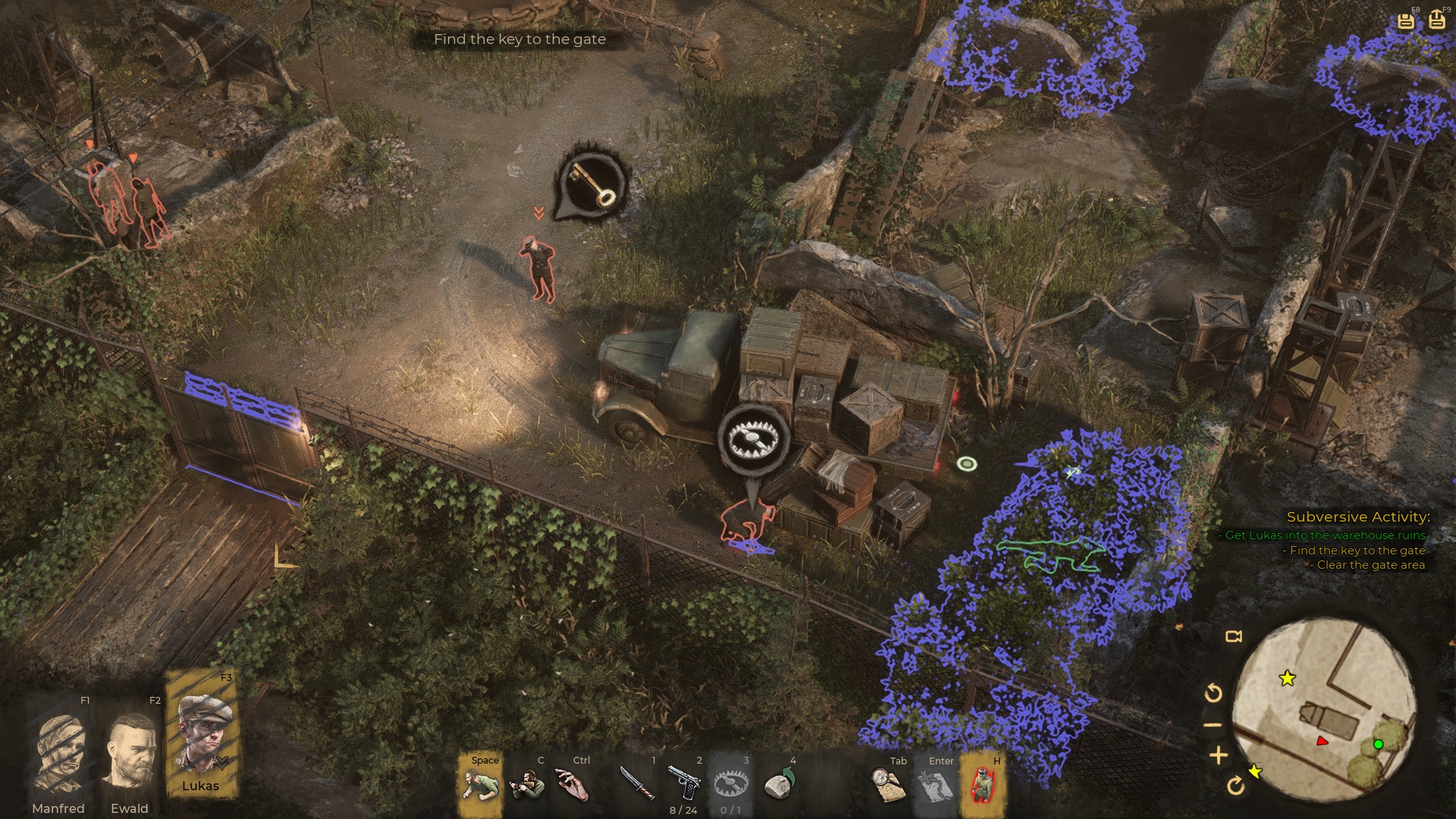 Although DC have ditched the globetrotting, cinematic feel of the originals – levels no longer reference classic war movies such as The Bridge on the River Kwai and Where Eagles Dare – almost everything else I loved about Commandos seems to be here. 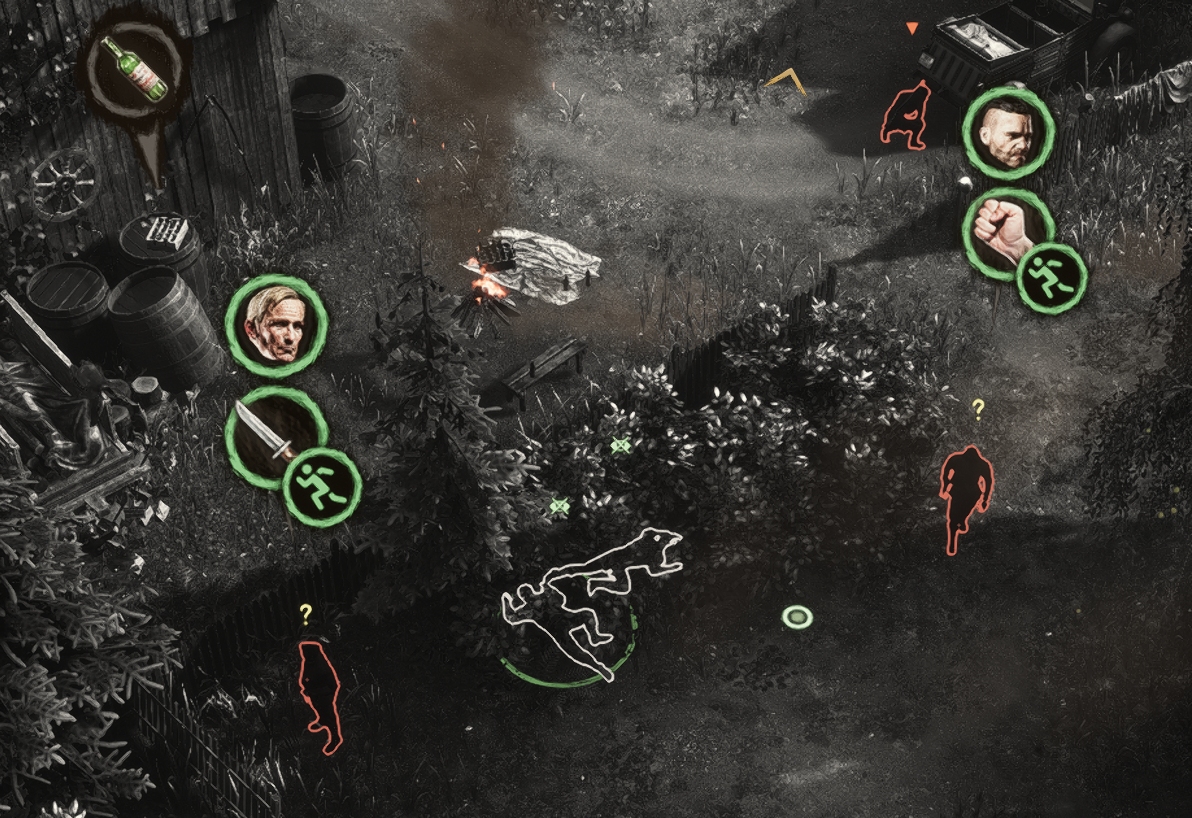 Clearly, the Poles are familiar with Mimimi’s work, as we get a bevy of Shadow Tactics-style amenities in addition to the thinly disguised Commandos nostalgia. The large, experimentation-friendly Ost Front maps are fully rotateable 3D, not four-perspective isometric renders. There’s a super-slo-mo planning mode that allows the actions of multiple characters to be cued and coordinated. And for those moments when stealth isn’t necessary, dabbing ‘C’ enables ‘direct control’ gun-play somewhat reminiscent of Men of War. One of the few disappointments is the lack of interiors, abstracted or otherwise, in levels 1 and 2.*

* Steam screenshots suggest the mongrels do get to go indoors later in the campaign. 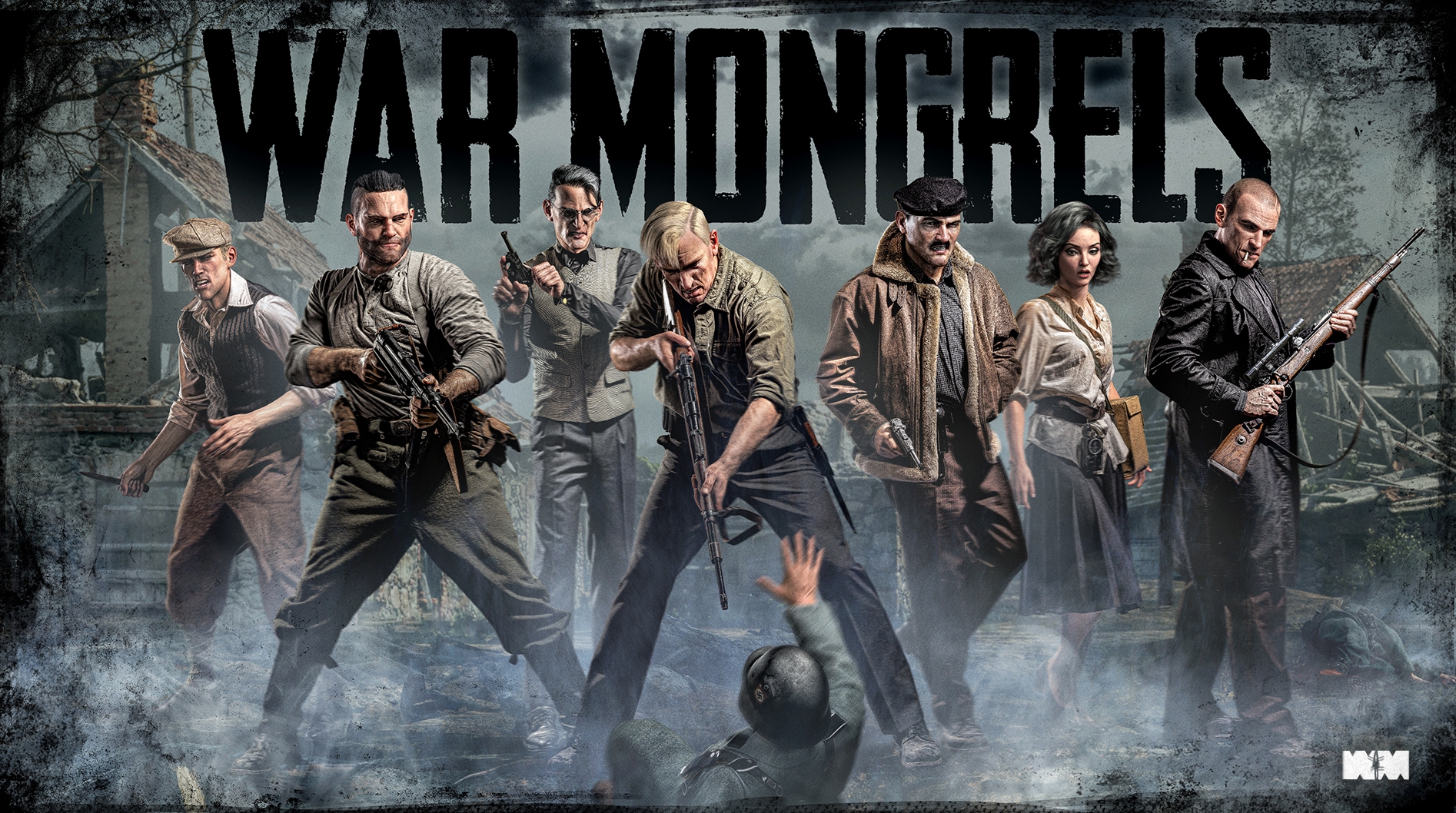 Based on the three characters I’ve met thus far, the titular band of deserters and partisans doesn’t exactly break the mould when it comes to skills and impedimenta. Musical pocket watch? Check. Gin trap? Check. Diverting booze bottle? Check. However, team members and the levels they navigate have been designed with thought and care. Attempt to depopulate a map hastily, noisily, or using a single operative, and frustration is guaranteed. 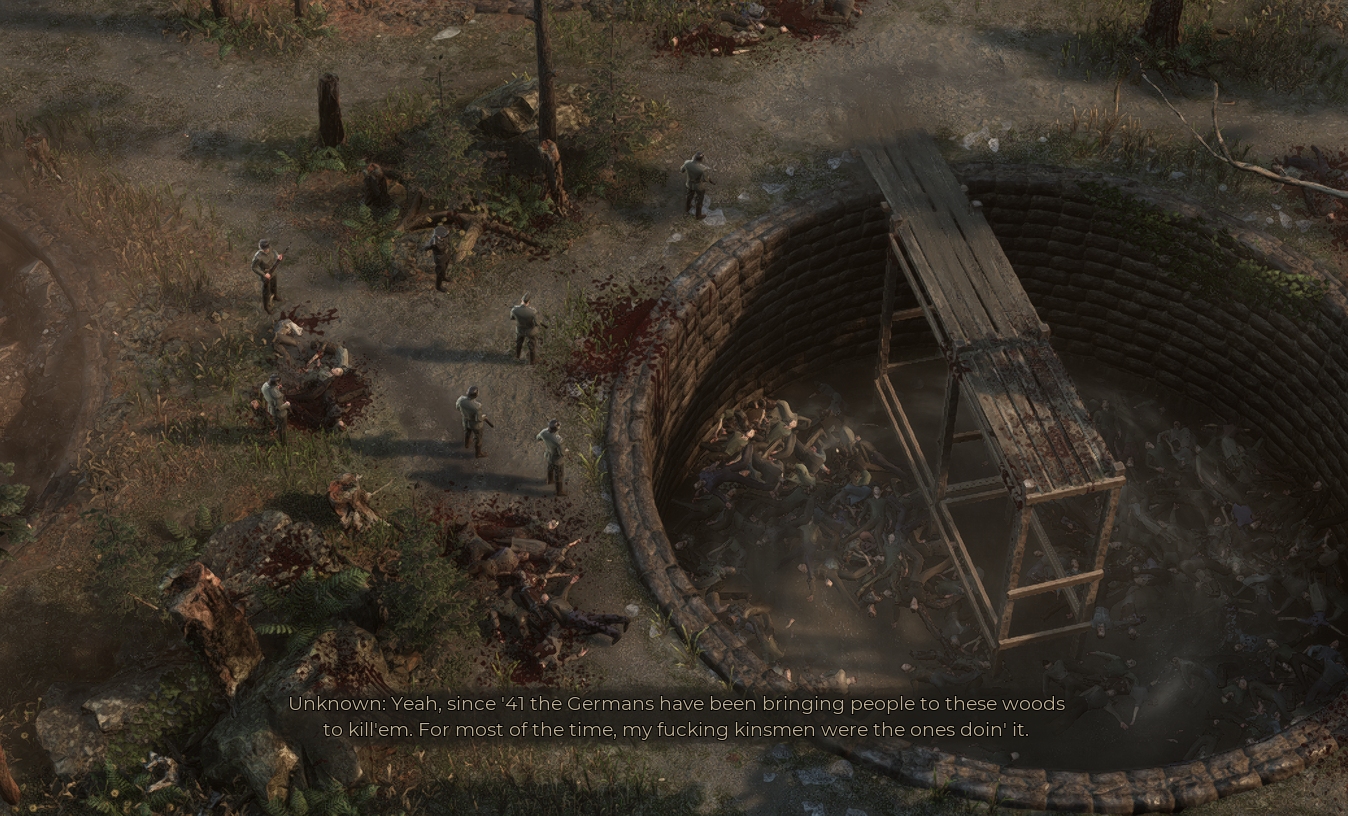 I’m not sure yet how I feel about the “dark themes”. The “realistic portrait of the War” encompasses SS massacres of civilians, “torture of innocents”, and swears, but fails to acknowledge that low garden fences, log piles, and parked carts aren’t unscaleable barriers to an able-bodied Homo sapien. 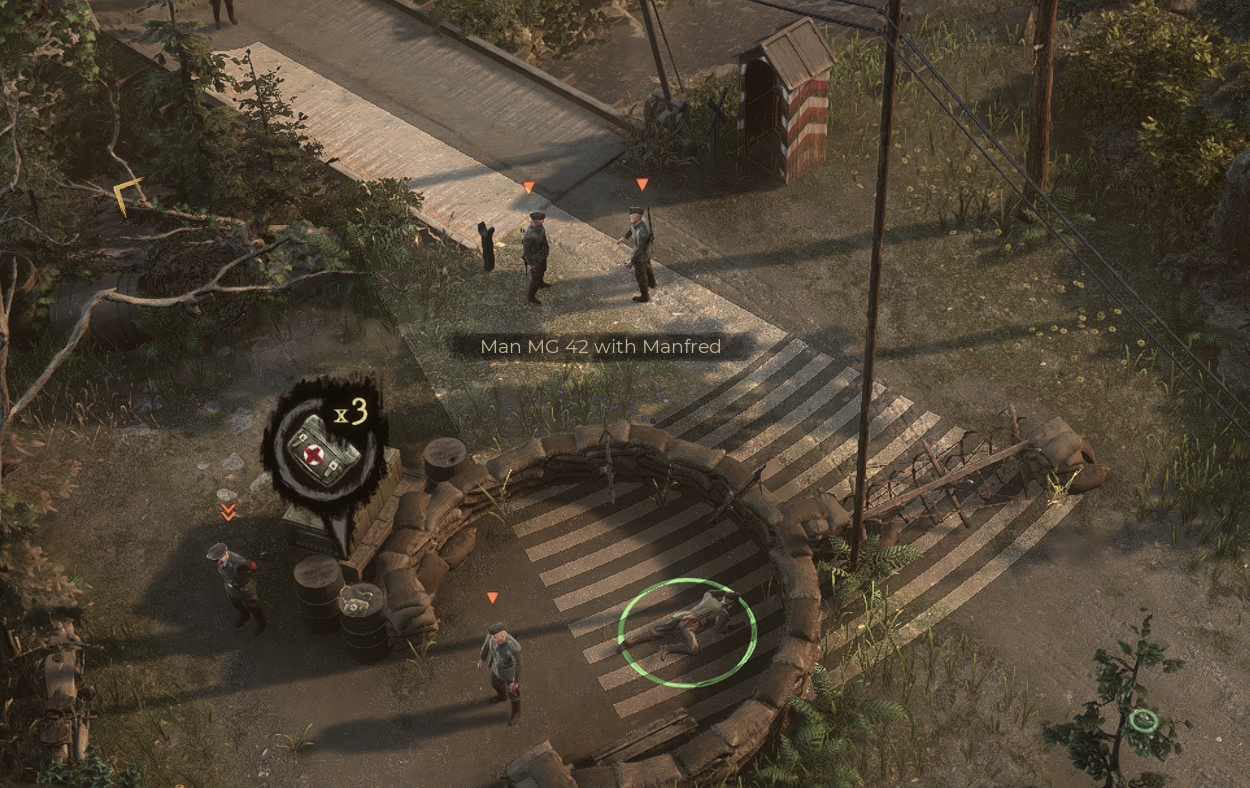 At this point I’ve no complaints about enemy AI. I like the way mistakes and miscalculations aren’t punished instantly. Often you’ve a second or two in which to improvise or retrace steps. As in Mimimi titles, higher ranking foes are harder to distract than bog-standard goons. Meleeing an alerted armed adversary from the front is seldom wise. After a brief, nicely animated tussle, the chap with the rifle or SMG invariably gets the upper hand. 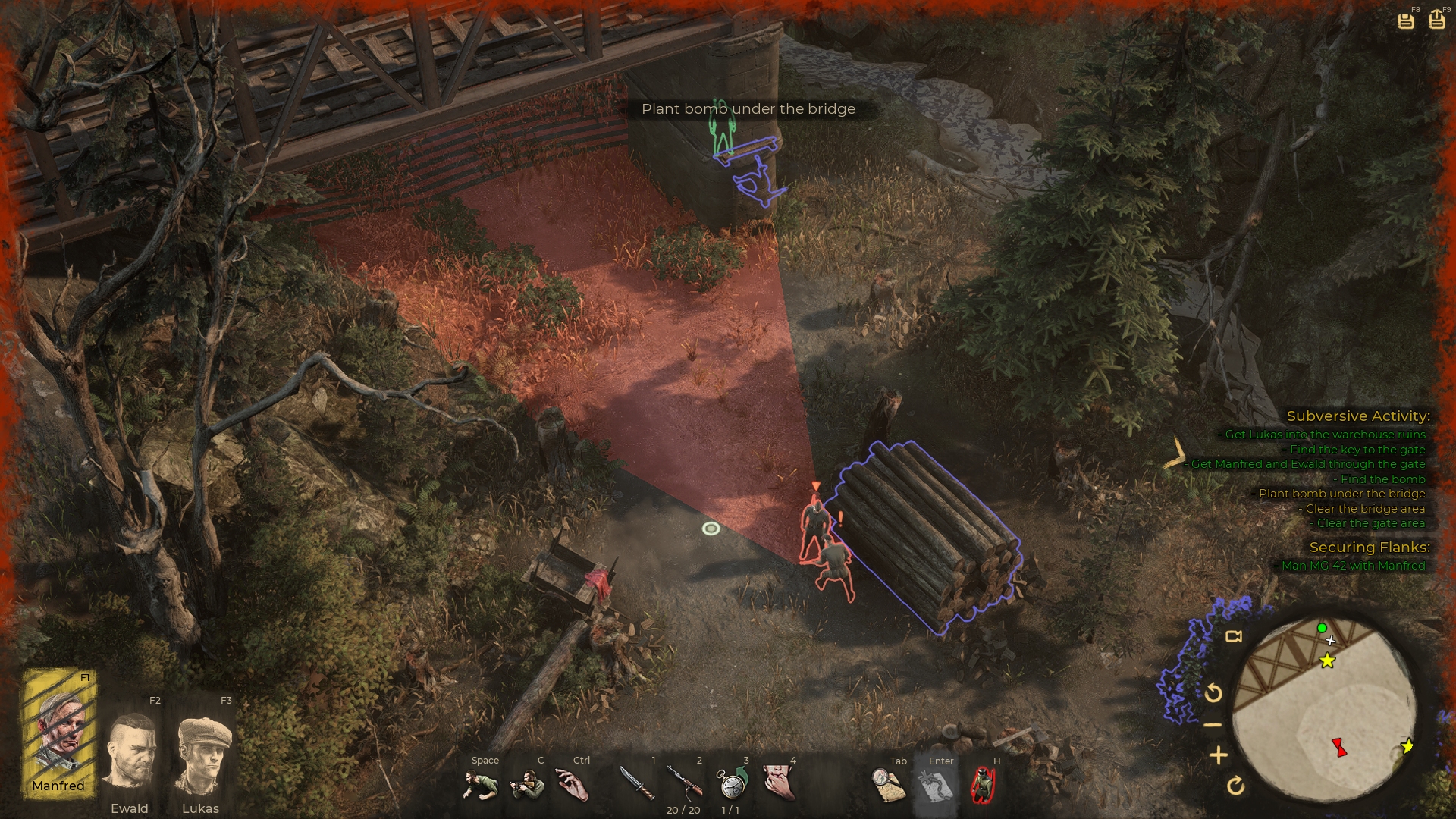 Fumigated by a flurry of quick patches, the bugs that caused a rash of red review thumbs soon after launch, are now hard to find. Does DC still have work to do? Yes, but the fact that I’ve only encountered one glitch – an inconsequential one involving an untraversable upper storey – in three hours of play is encouraging. I plan to press on, albeit with the voice-overs volume slider set to zero. 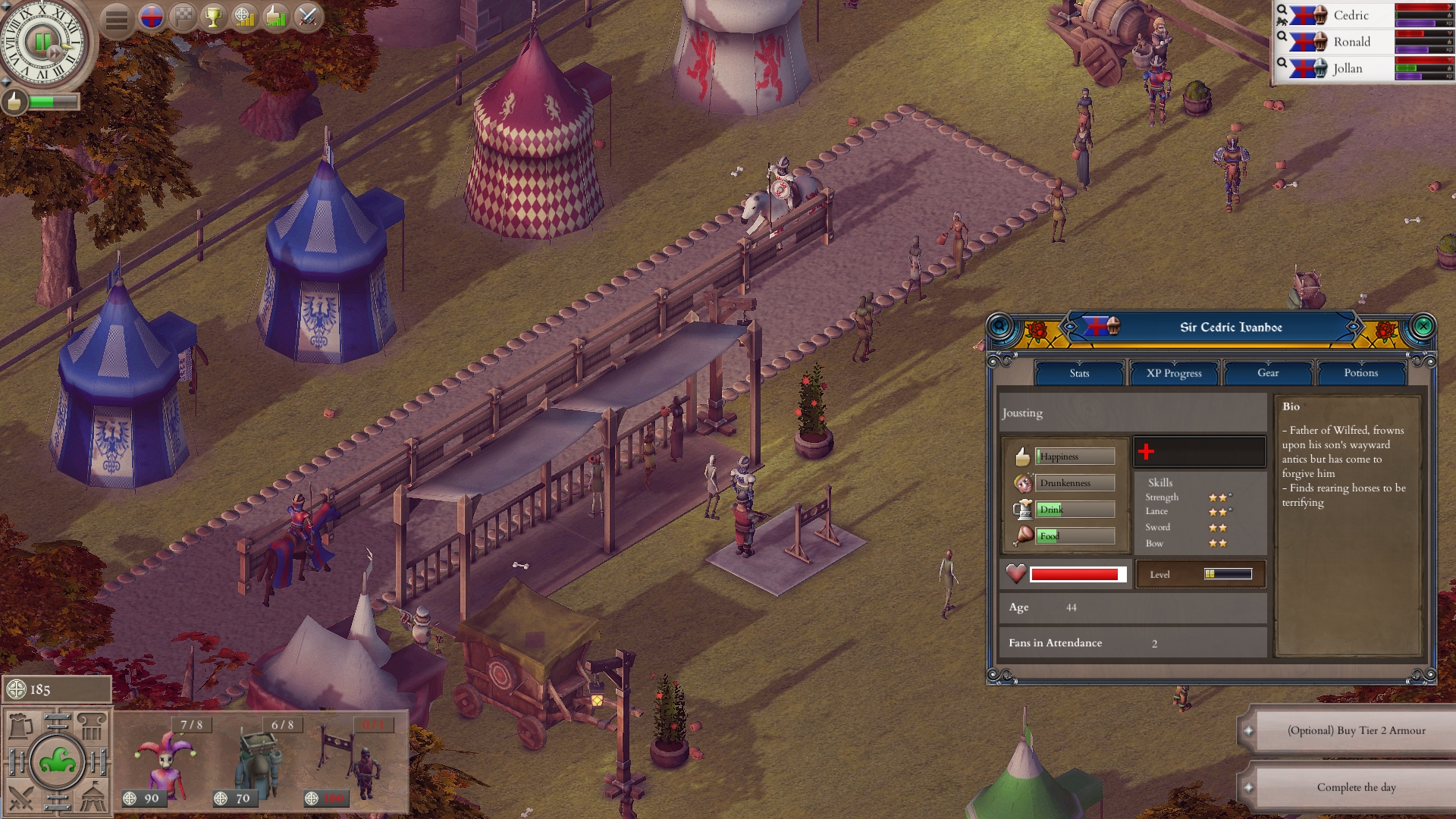 Drop Rollercoaster Tycoon, Stronghold, and Gladiator Manager into a mortar and give ’em a good pestling and Tourney is the tasty paste produced. 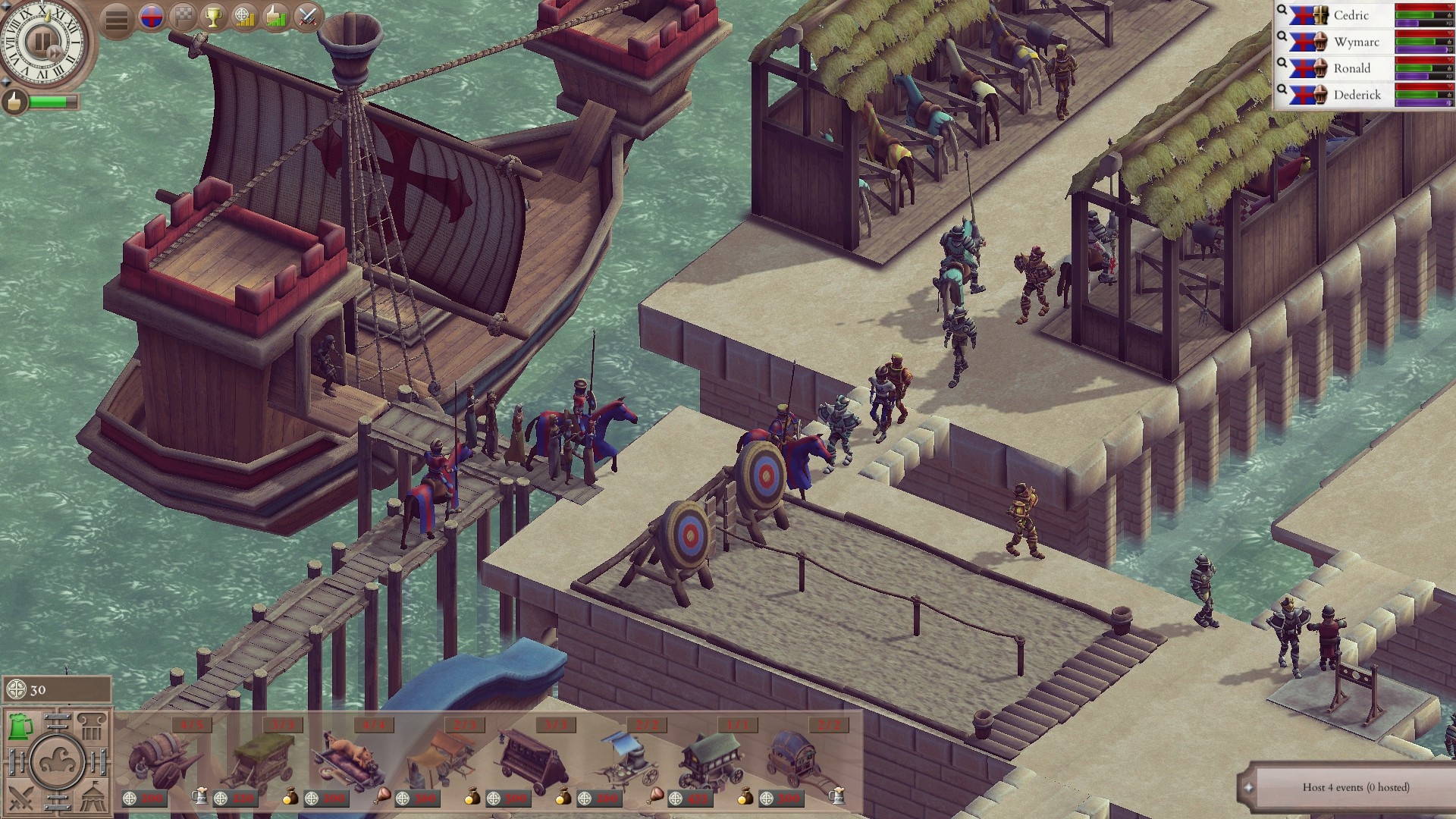 Made in a workshop not far from the head-bedecked battlements of Castle Shotgun, this medieval management game not only expects you to organise profitable multi-discipline tournaments, it gives you the chance to win said events with hand-reared sword swingers, lance couchers, and bow benders drawn from your own “noble house”. 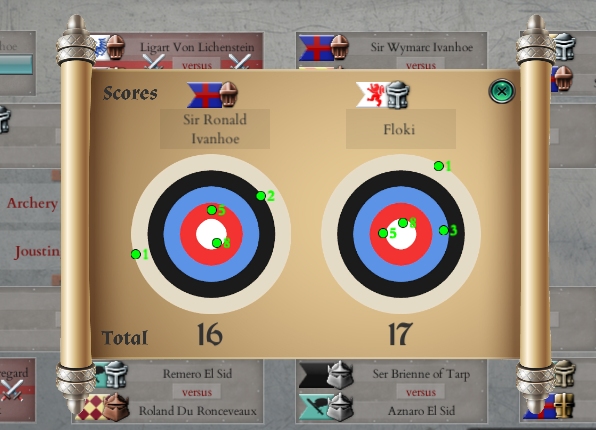 The concept is genius, the execution professional, and the tone charming, but I’m already beginning to rue some missing features and missed opportunities. 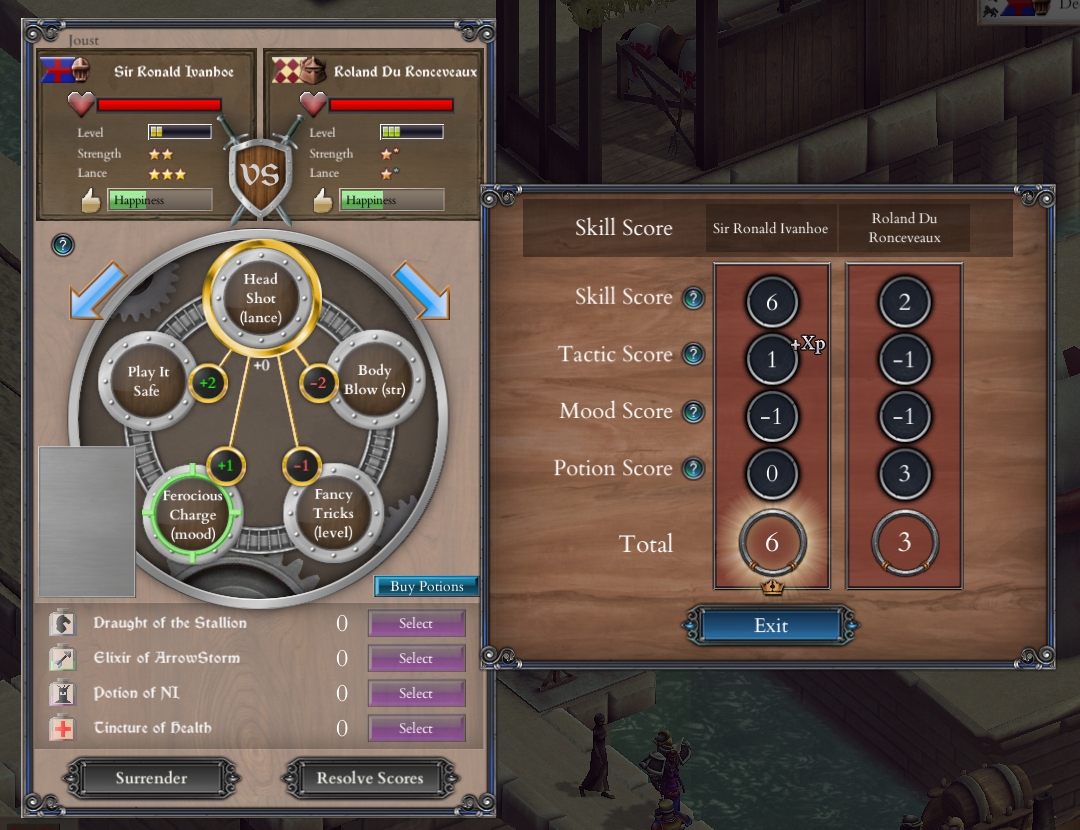 While I have no complaints about the clever way the tycoonery has been leavened with tactical mini games (Second-guess opponents in the lists! Aim bows at bulls-eyes at the archery ground!*) I’m concerned that the game’s claustrophobic campaign (there seems to be no way to ‘free build’ sans story) and slightly shallow venue management mechanics will, in a day or two, sour a promising relationship.

* Your men’s fitness, morale, sobriety and equipment also has a big impact on their performance. 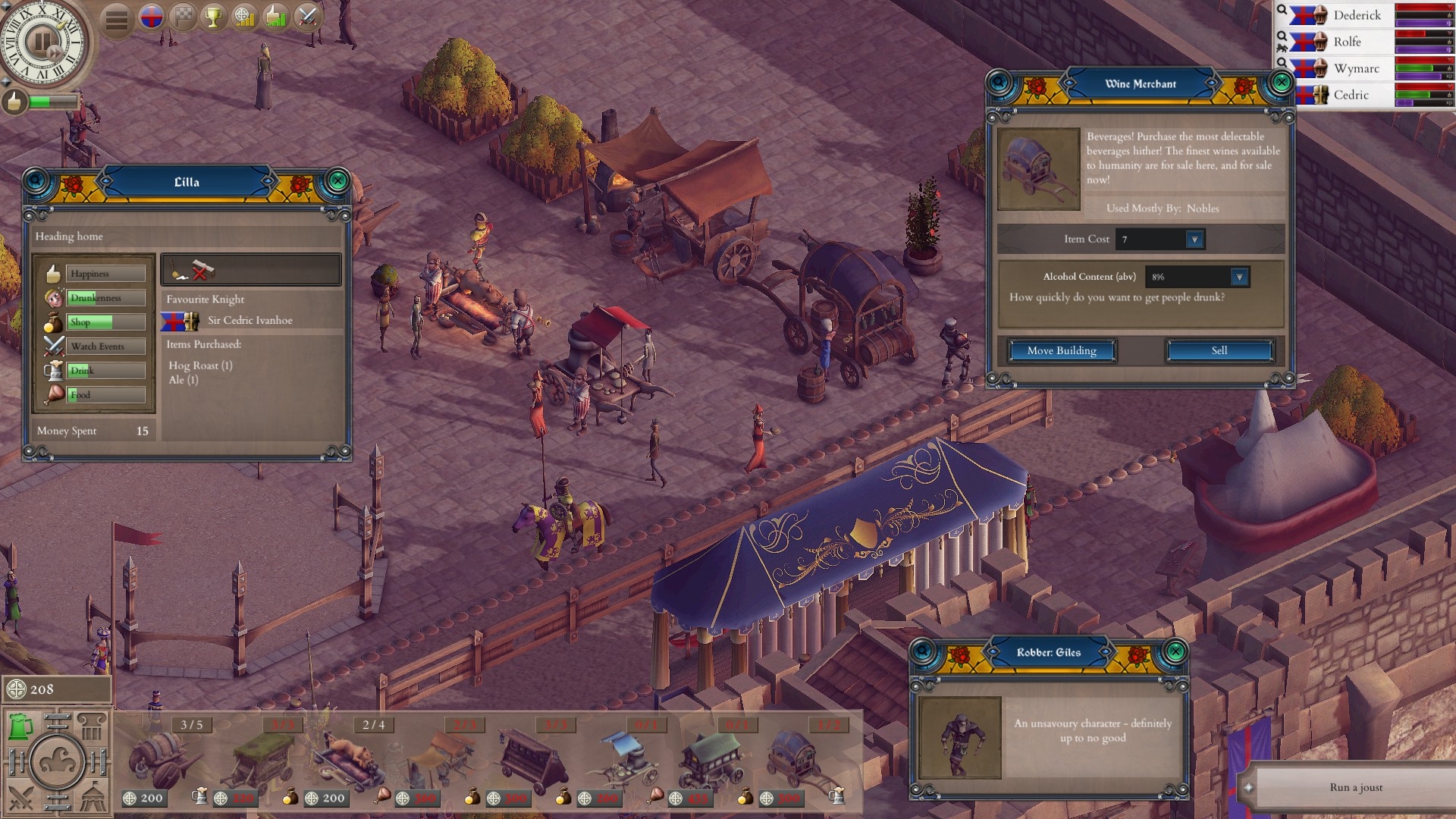 So far everything I’ve done I’ve done to please a demanding campaign designer. Build five stalls for posh visitors… get 50 spectators legless… make 300 gold by nightfall… win the final of a jousting competition… the tasks I’ve tackled during the past three hours have been absorbing, but I’m now itching for some looser challenges and there’s nothing to suggest that freedom is around the corner. 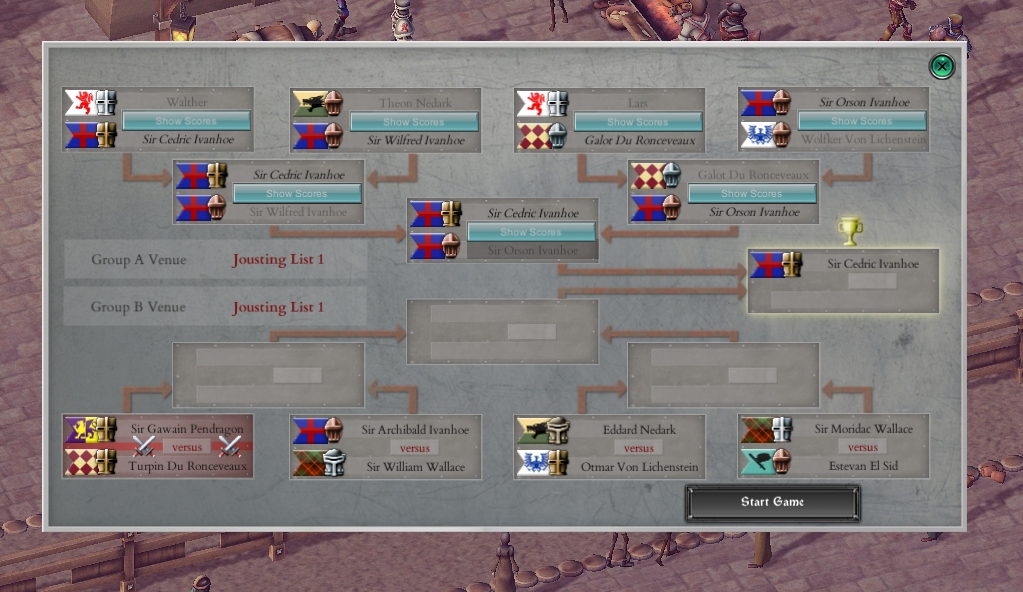 Also, increasingly, I’m finding my mind turning to omissions like mud and mayhem. As things stand, tourney organisers must grapple with two main bugbears – litter and pickpocketing. Periodic showers dampen the spirits of attendees (if you fail to provide covered stands), but never turn busy turf thoroughfares into quagmires. Drunken punters never get lairy and start trashing amenities. Competitor tents and stables aren’t ever ravaged by spreading fires. Dancing bears (of which there are none!) don’t go on the rampage… In other words, Tourney isn’t nearly as colourful and complex as it could be. 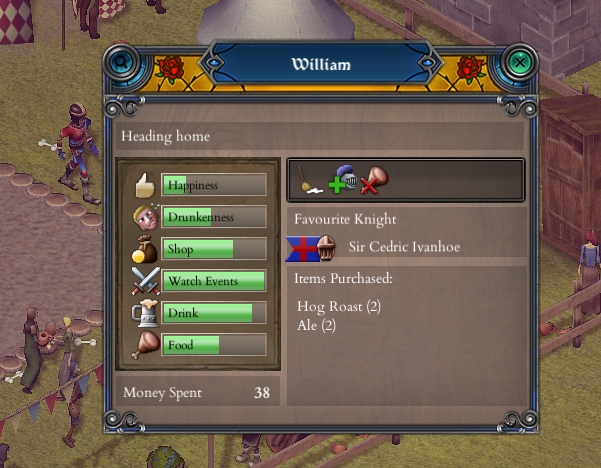 What’s that you say? “Tim, you expect far too much from a ten quid game!”. Fair point, but if Tourney 2 ships without at least one of the following – sloughs, riots, blazes, or brassed-off bruins – no amount of special pleading will save it from a spell in the dung-spattered THC pillory. 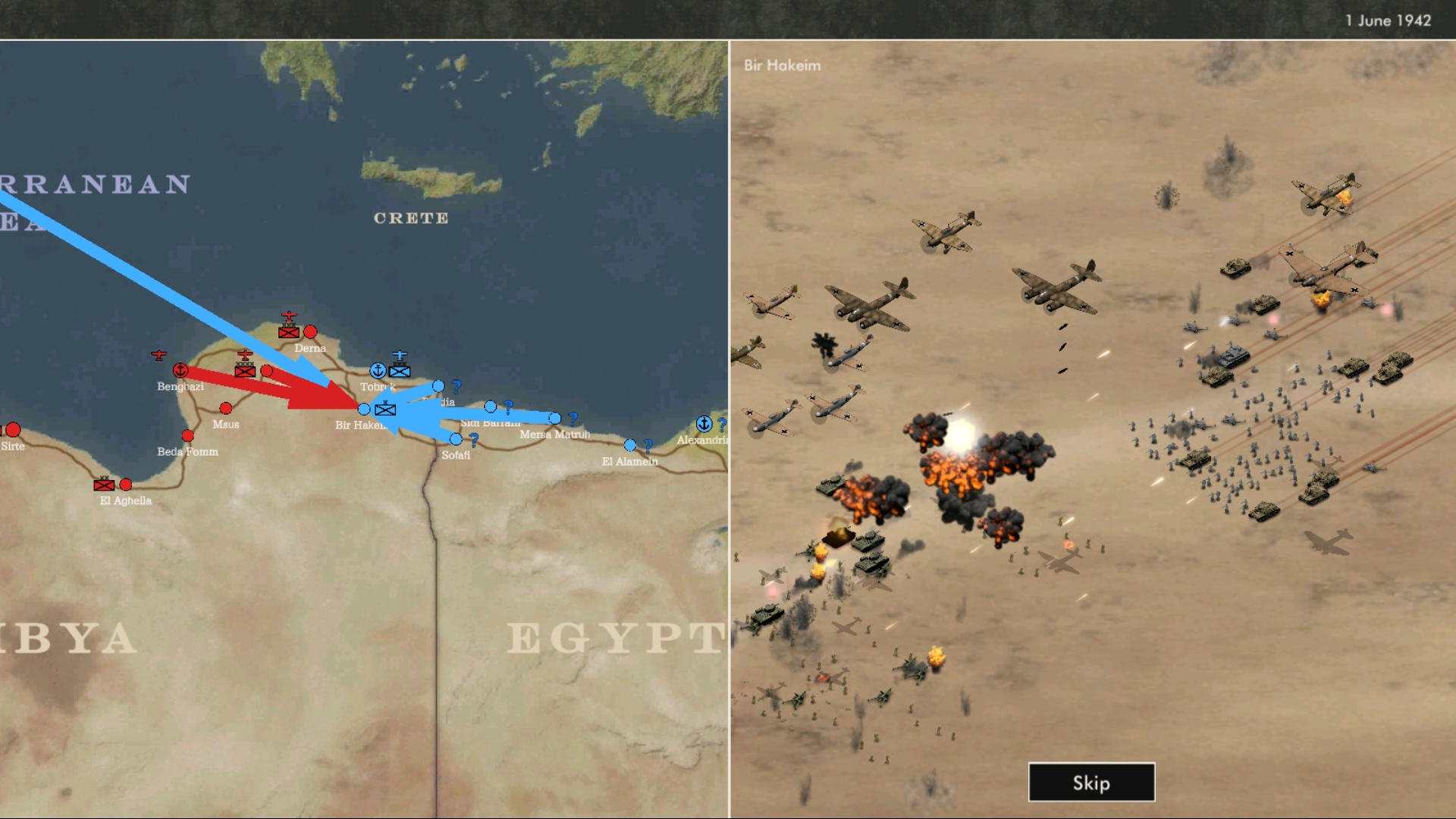 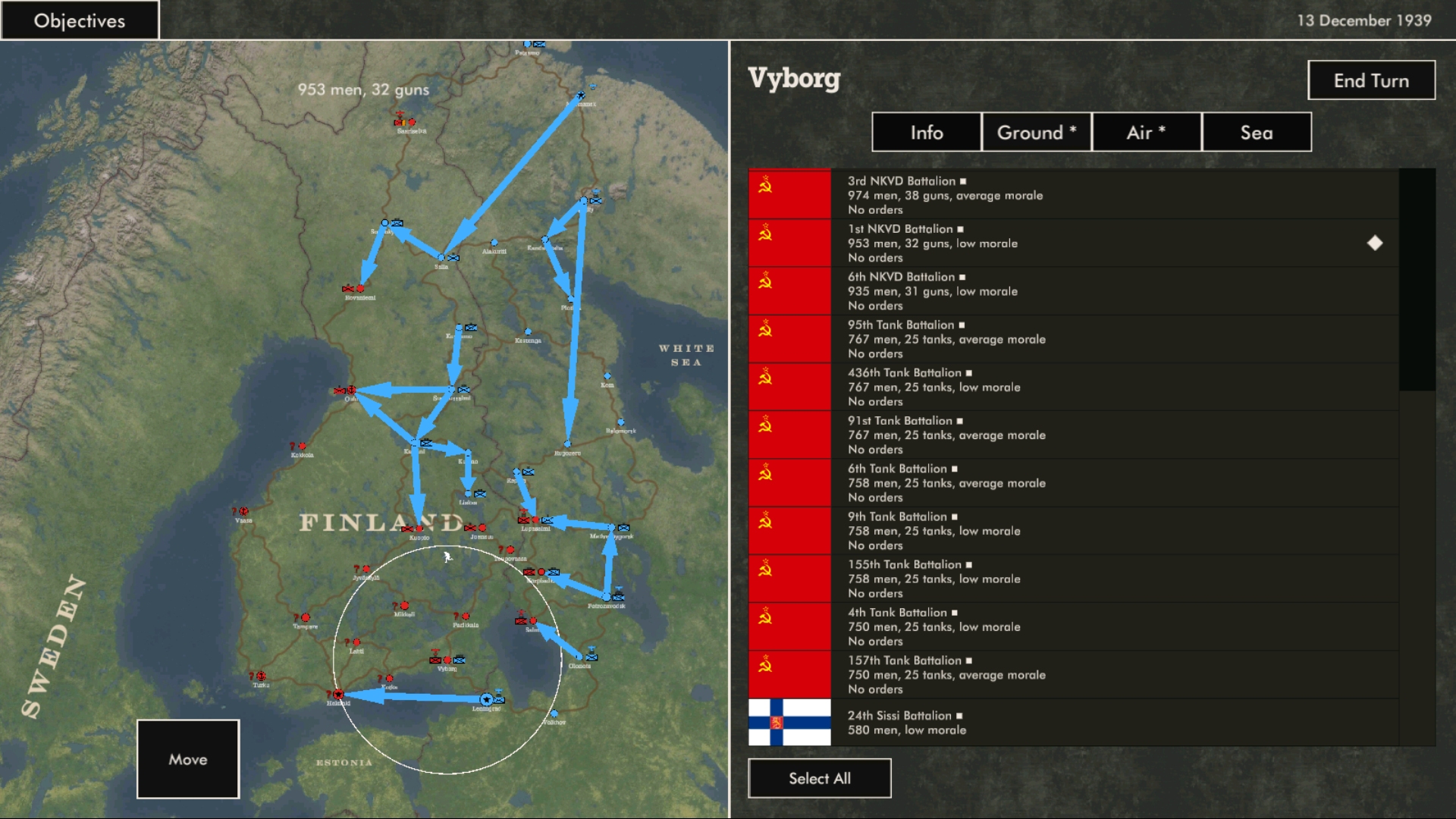 A list of the things I’ve achieved in my first few hours of emulator-enabled generalship (You’ll need BlueStacks to play BF on PC) will give you a sense of just how nippy the warfare is. This morning I’ve… 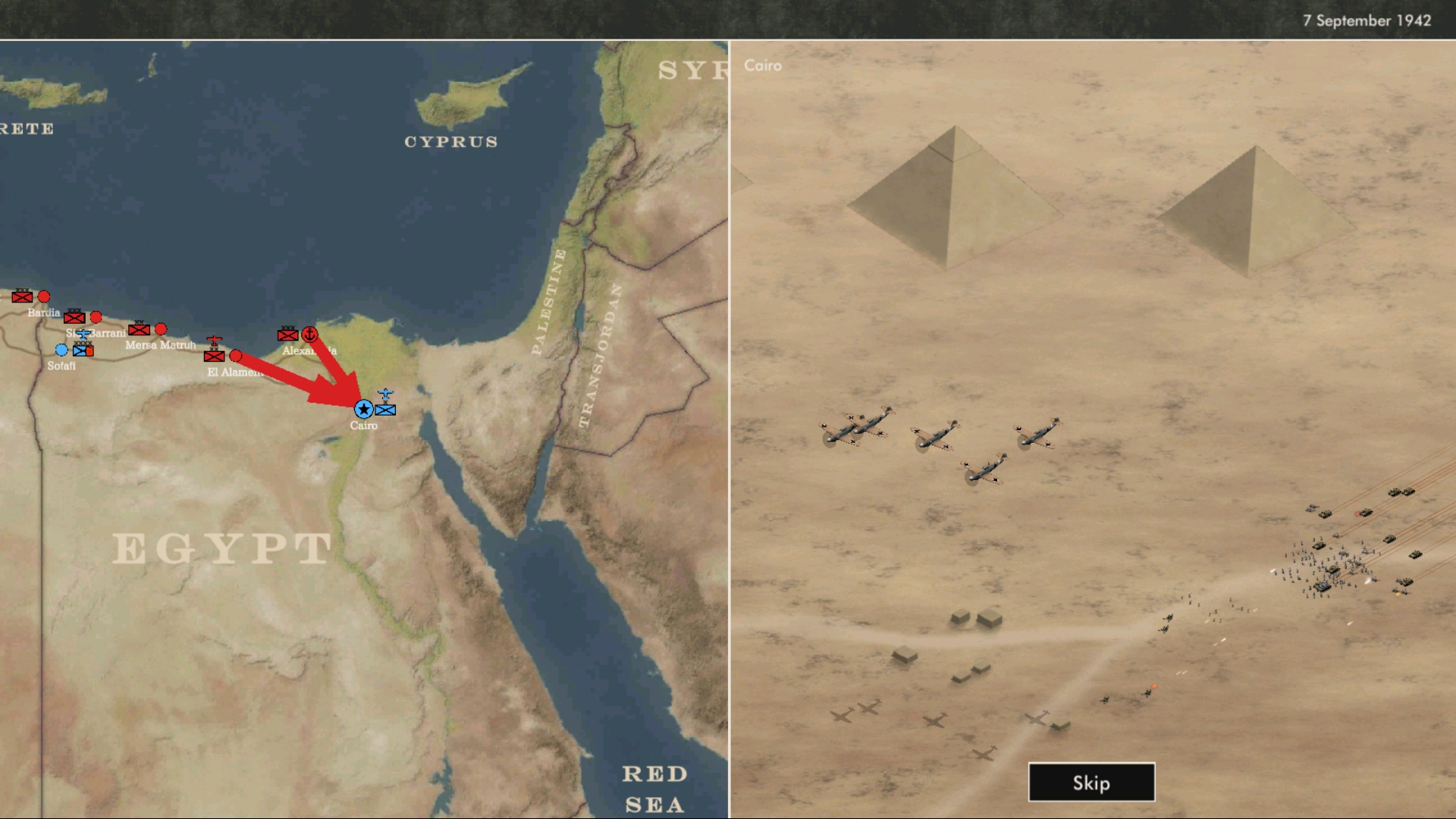 If those Panzers and German armies had been AI controlled, these paragraphs would contain little but praise. Because they were marshalled by a callow human, I must balance enthusiasm for the idiot-proof mechanics (‘Move’ is the only order available to ground units. Aircraft can conduct various mission types), bulging scenario folder (19 European and North African campaigns including the Spanish Civil War and the Continuation War), and host of combat-complimenting subtleties (paradrops, amphibious operations, logistics, strategic bombing…) with a dash of caveat emptor. 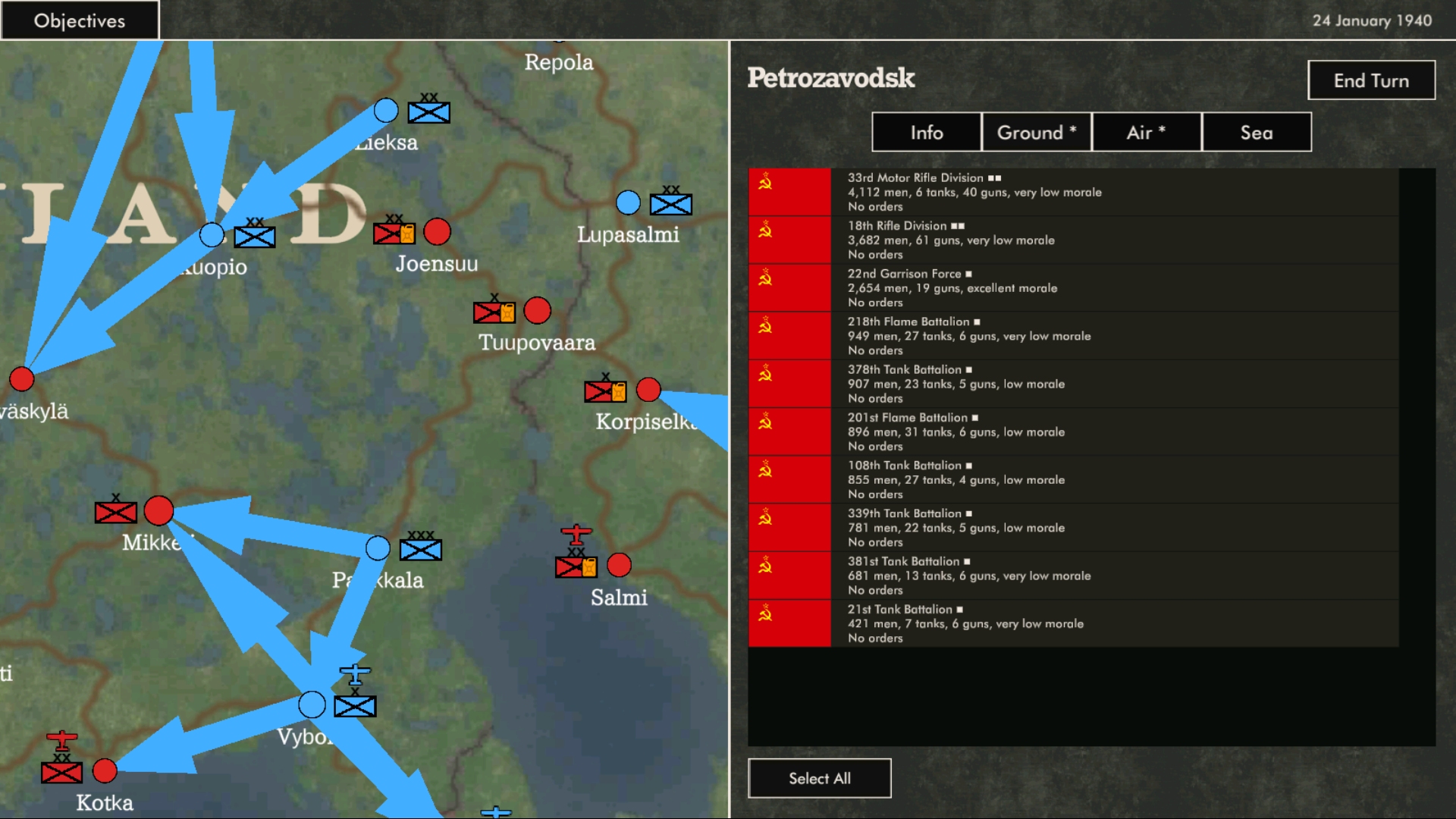 BF upholds The Difficulty Compact by adjusting enemy aggressiveness and cunning when you change the difficulty settings. While this approach seems to work pretty well in some scenarios, ‘Winter War’ for example, in others such as ‘El Alamein to Tunisia’ and ‘The Siegfried Line’ it’s undermined by the game’s disappointing tolerance of ‘doom stacking’. 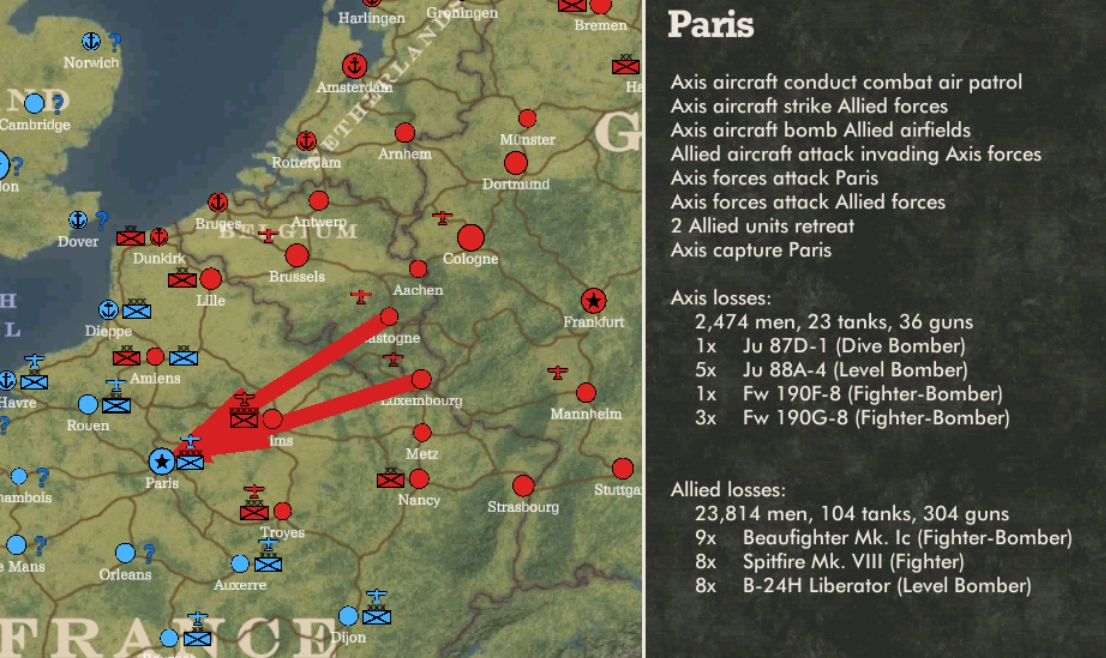 Presently there’s nothing to prevent players from assaulting single nodes with colossal clots of warriors and war machines, and this oversight, combined with some balancing issues, inevitably (if you’re an inquisitive reviewer) leads to eyebrow-elevating events like goose-steppers returning to the Champs-Élysées in late 1944. 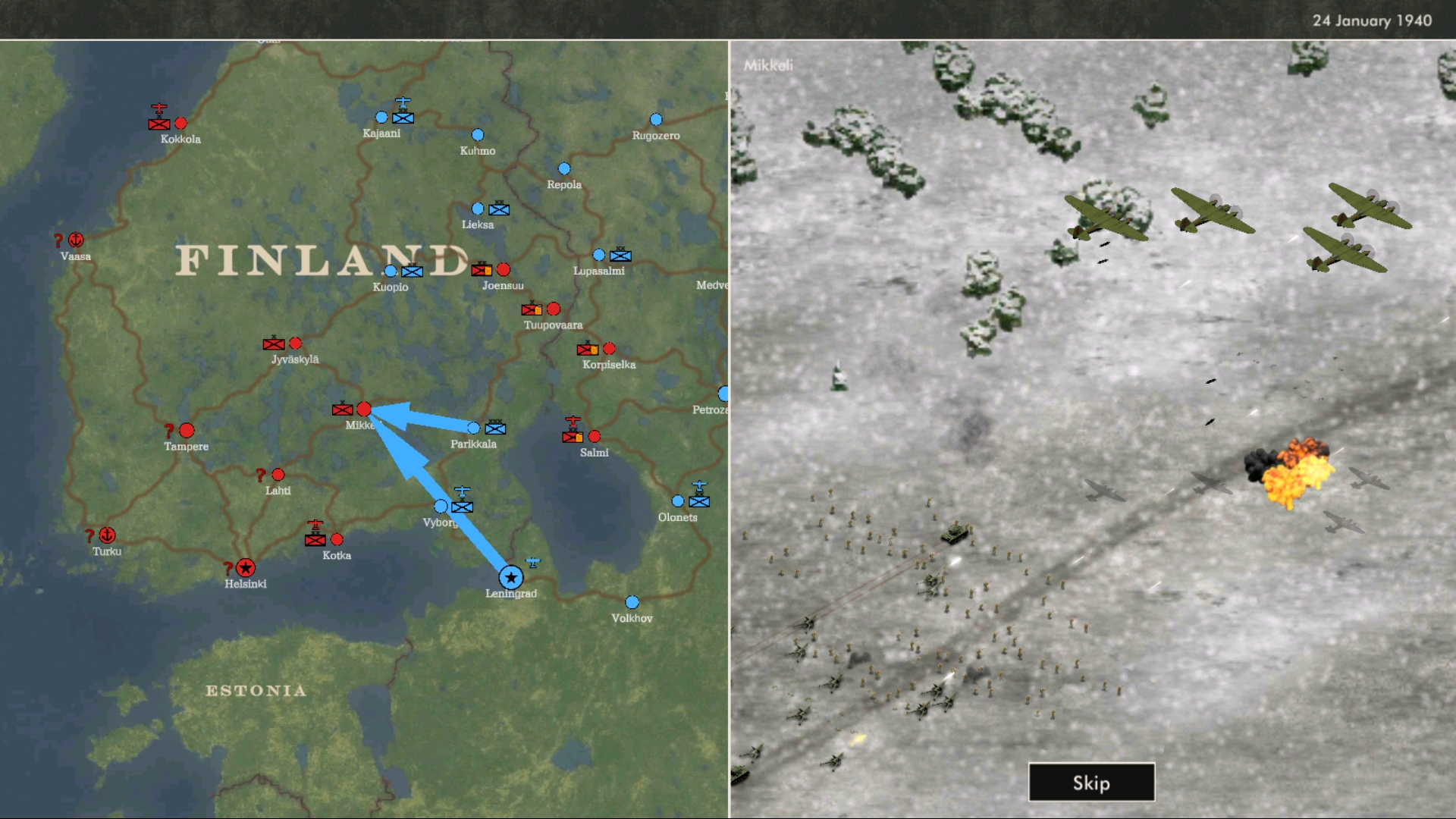 Blitzkrieg Fire might need stacking limits (and, ideally, some changes to the way urban battles and fortress assaults are modelled) to compete with comparable PC products (sorry, I can’t tell you how it compares to other Android wargames) but it doesn’t need them to entertain. Contemplating arrow-strewn maps, watching isometric aircraft unleash hell, pondering vague recon reports and splendidly detailed post-battle casualty lists, indulging in a bit of experimental strategic bombing (industrial damage impacts automatic reinforcements)… when I wasn’t stress-testing and exploit hunting, I was happy enough.