Want to turn a green lane into a brown lane, tow a Gulaschkanone across a snowy field, or roam the Western Desert trashing Axis airfields? Get a 4×4. Want quick introductions to recently released PC games of interest to wargamers and simmers? Read a 3×3. Prior to penning one of these articles I’ll play three tempting newcomers for three hours each. While it would be cavalier to call the reports that result from such brief auditions ‘reviews’, it’s conceivable they might lead to more prolonged playtests, and prompt or prevent the odd purchase. 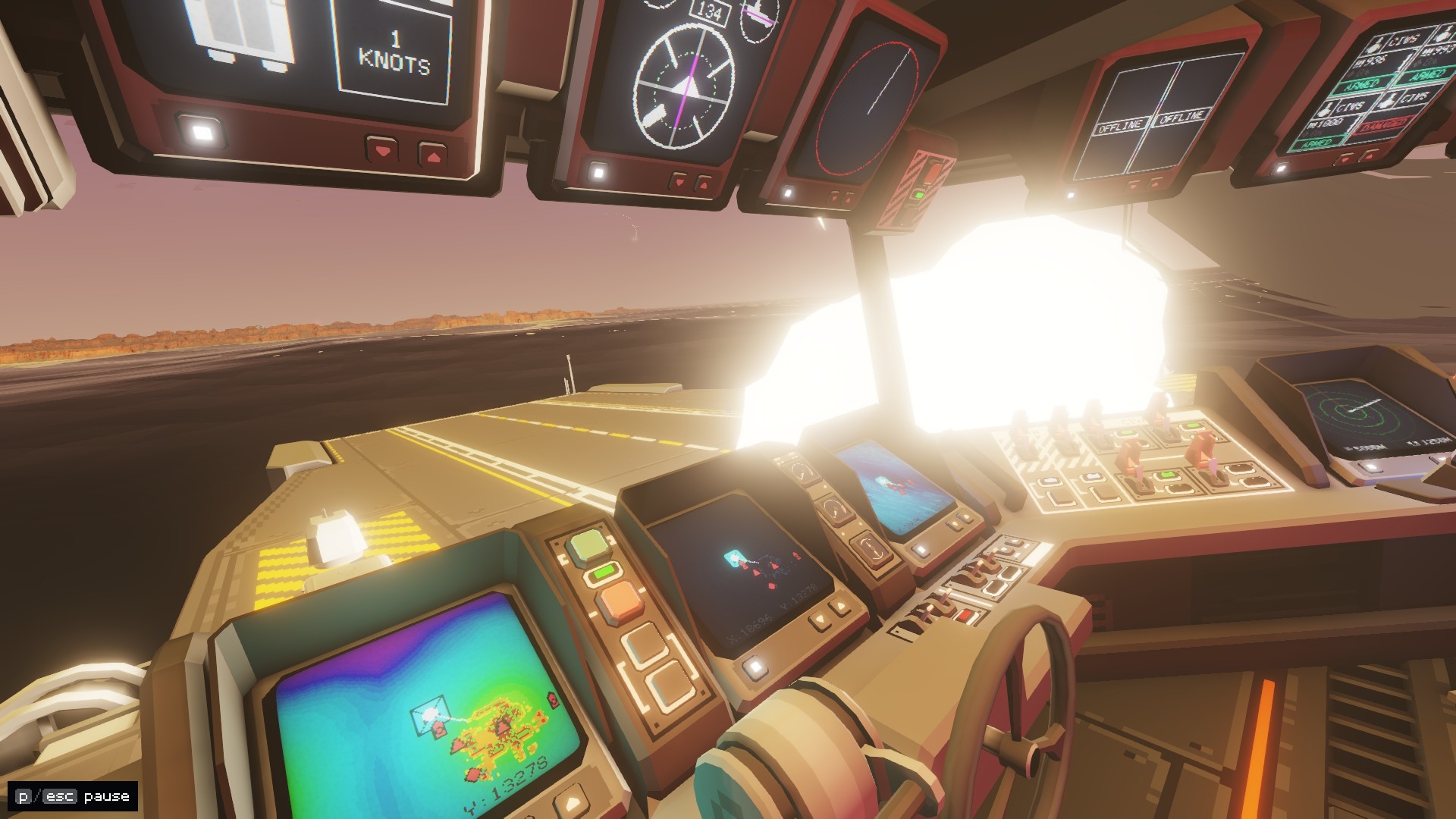 Where’s my crew of able androids? Why, in the year NEARFUTURE, are none of my war machines fitted with night vision cameras? How come my carrier is capable of 90 knots while the amphibious vehicles it disgorges dawdle to shore like clapped-out AAVs? Why has that enemy warship decided to go lounge on a beach mid-skirmish? Why can’t I drag-select groups of units on the nav map? Am I missing Hostile Waters’ soul chips as much as I think I am? 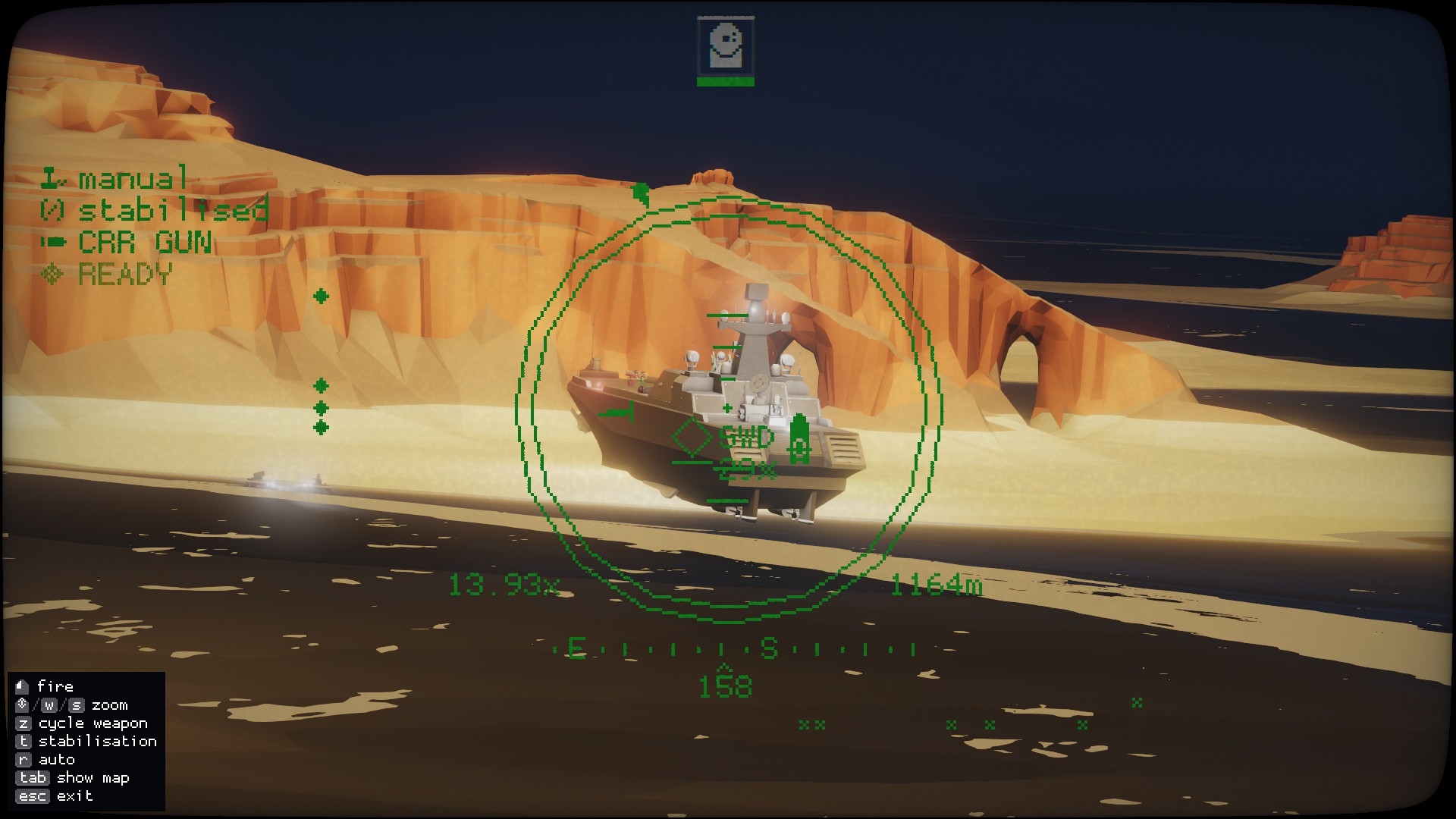 I’m three hours into MicroProse’s Carrier Command sequel and the nagging questions are mounting up like bladderwrack on a storm-pounded Cornish beach. 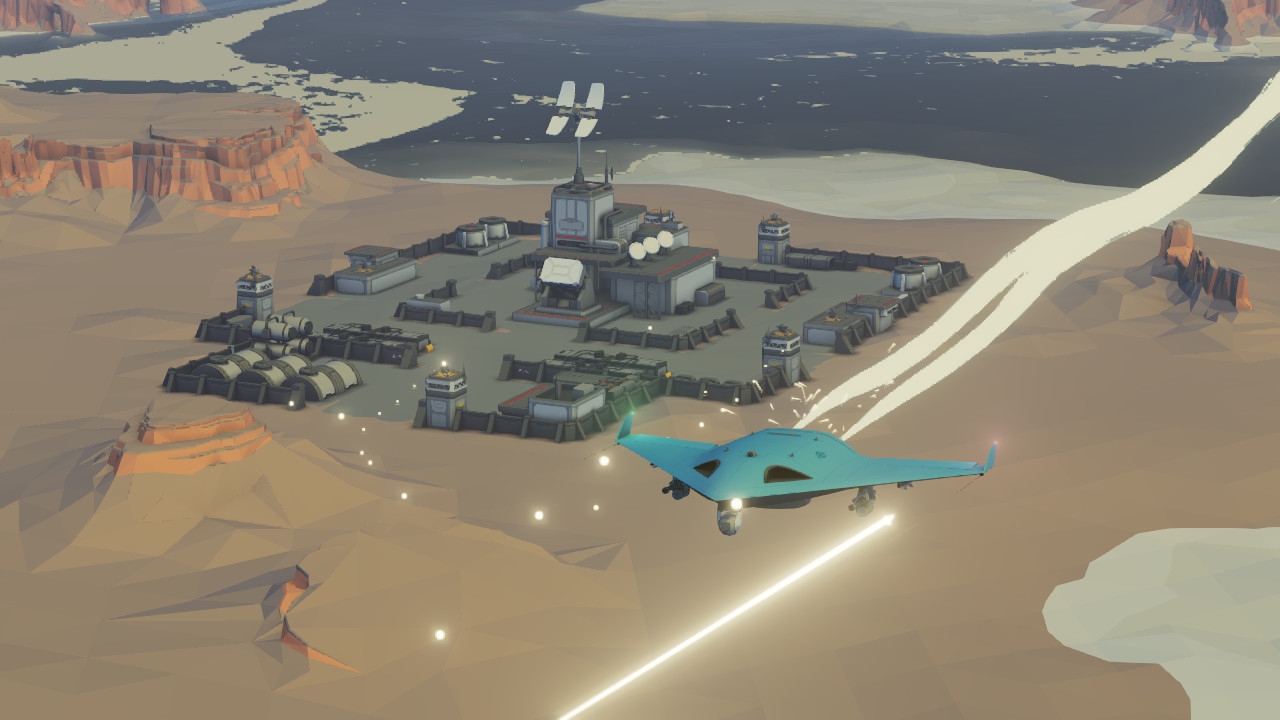 Right now, the novelty, tactical freedom and splendid GPU-gentle visuals, are keeping my enthusiasm levels high, but, if the niggles continue to accrue at their current rate, full-blown malaise by Monday morning is by no means out of the question. 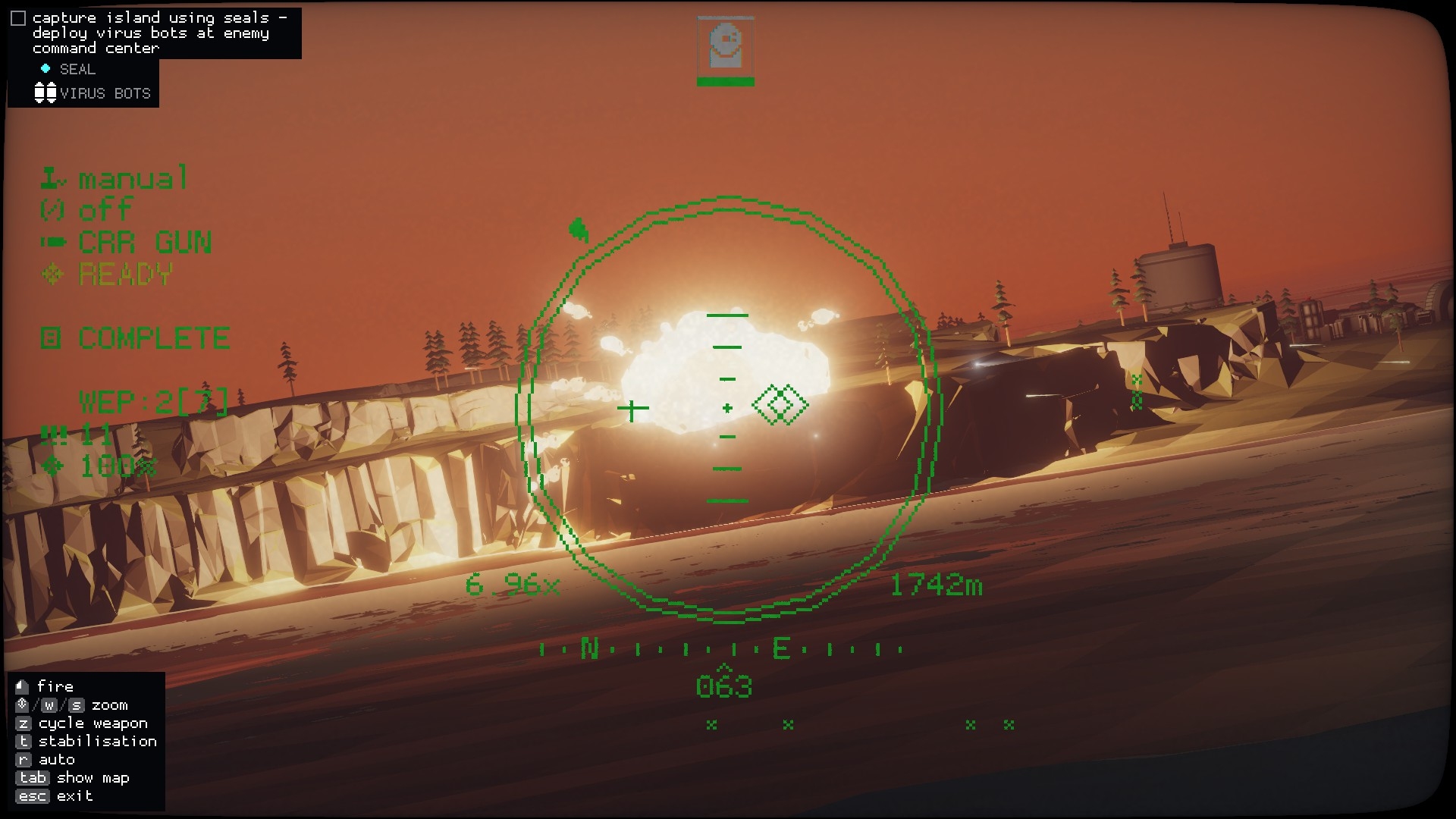 Carrier Command 2, like its Eighties inspiration, is a sim-RTS hybrid in which capturing islands with the replenishable contents and appendages of a futuristic flat top is the name of the game. Every randomly placed, procedurally generated archipelago has its own topography and defences, and, once conquered, grows your tech tree in a different manner.

Naturally, you’re always sharing the map with at least one silicon adversary, and that carrier owner is just as interested in acquiring beachfront real-estate as you are. 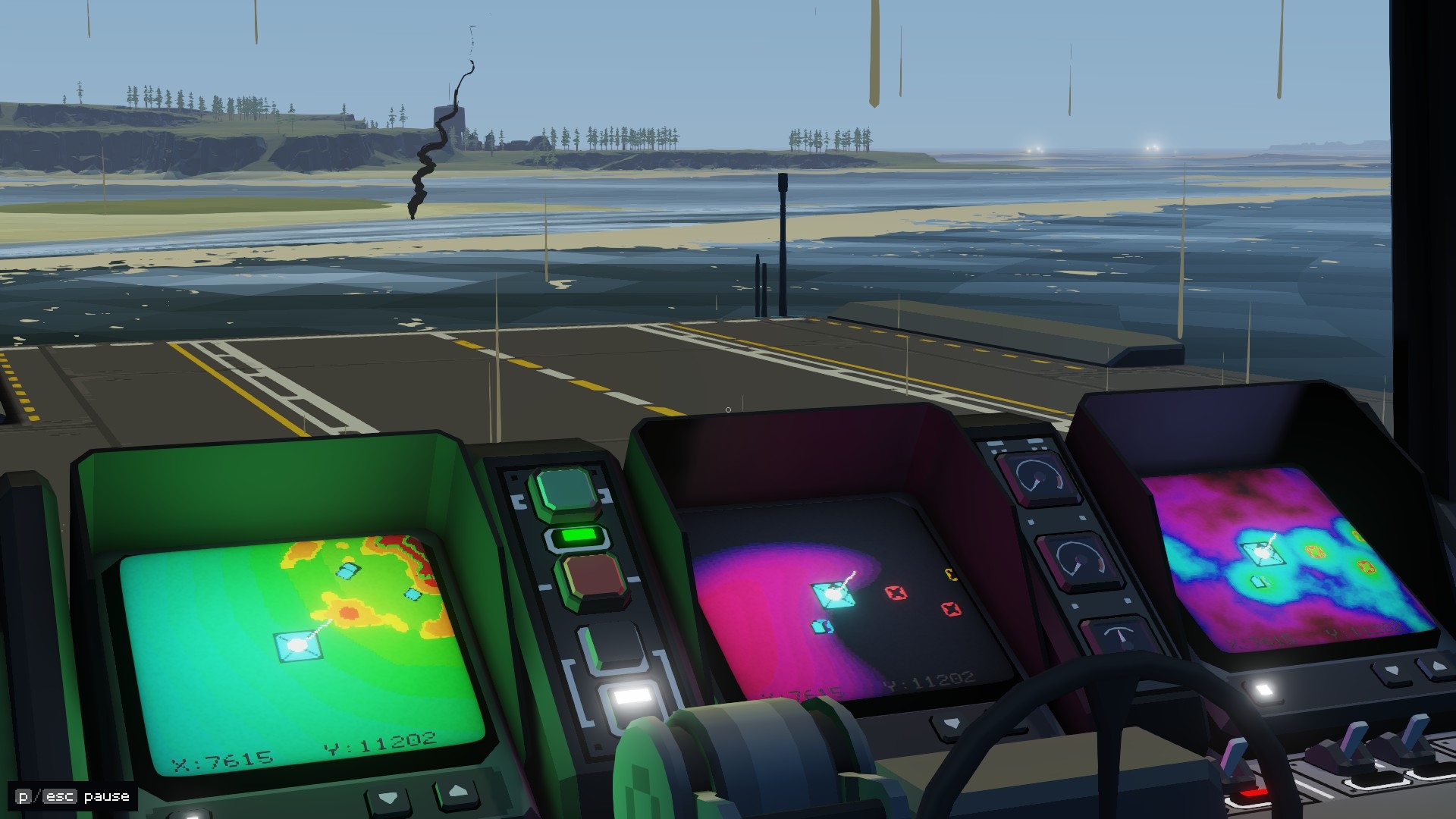 The virtual ship’s bridge you exit at your peril is both a delight and an irritant. Lined with usable stations, flickable switches, and functioning monitors, it implies that the game’s aggro arcs were never meant to be operated by lone defrosted mercs like your good self. Whereas the Rainbird original let you wage war from a single well-organised control console… 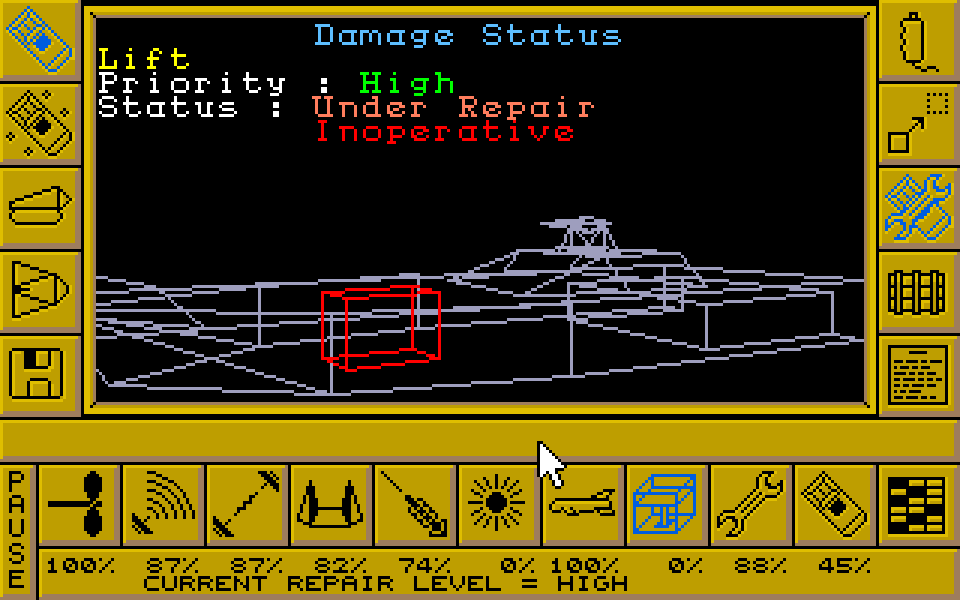 …in CC2 – assuming you don’t multiplay – you’re very much a blue-buttocked fly. WASD hither, press this. WASD thither, press that. The captain’s throne with nearby holo-map that should be tailor-made for solo players, is, in fact, little more than a posing/pondering plinth. 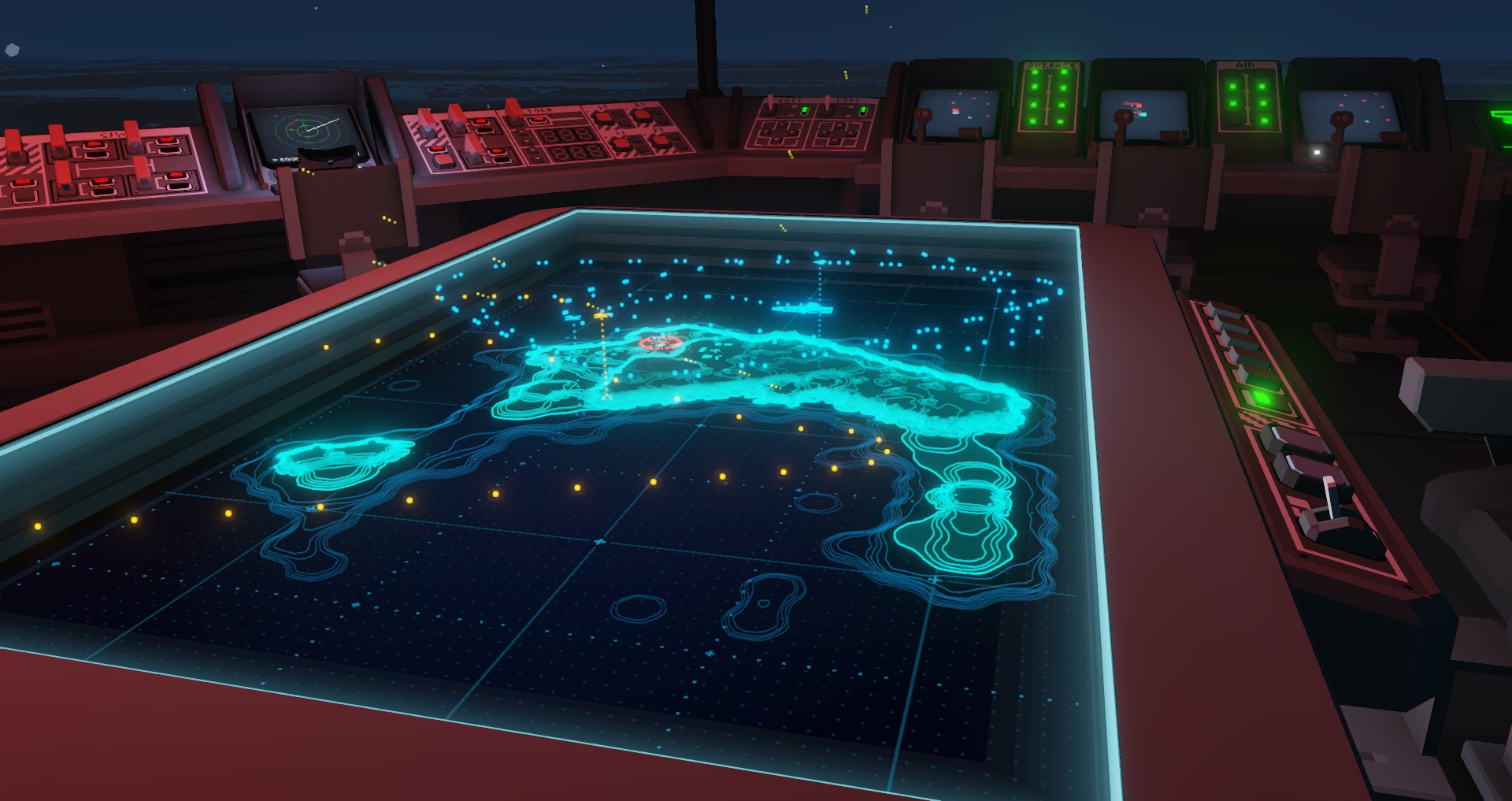 If the game was less bridge-focused, and units were more street/strait-wise, first-person excursions in winged and wheeled death-dealers would be more tempting. 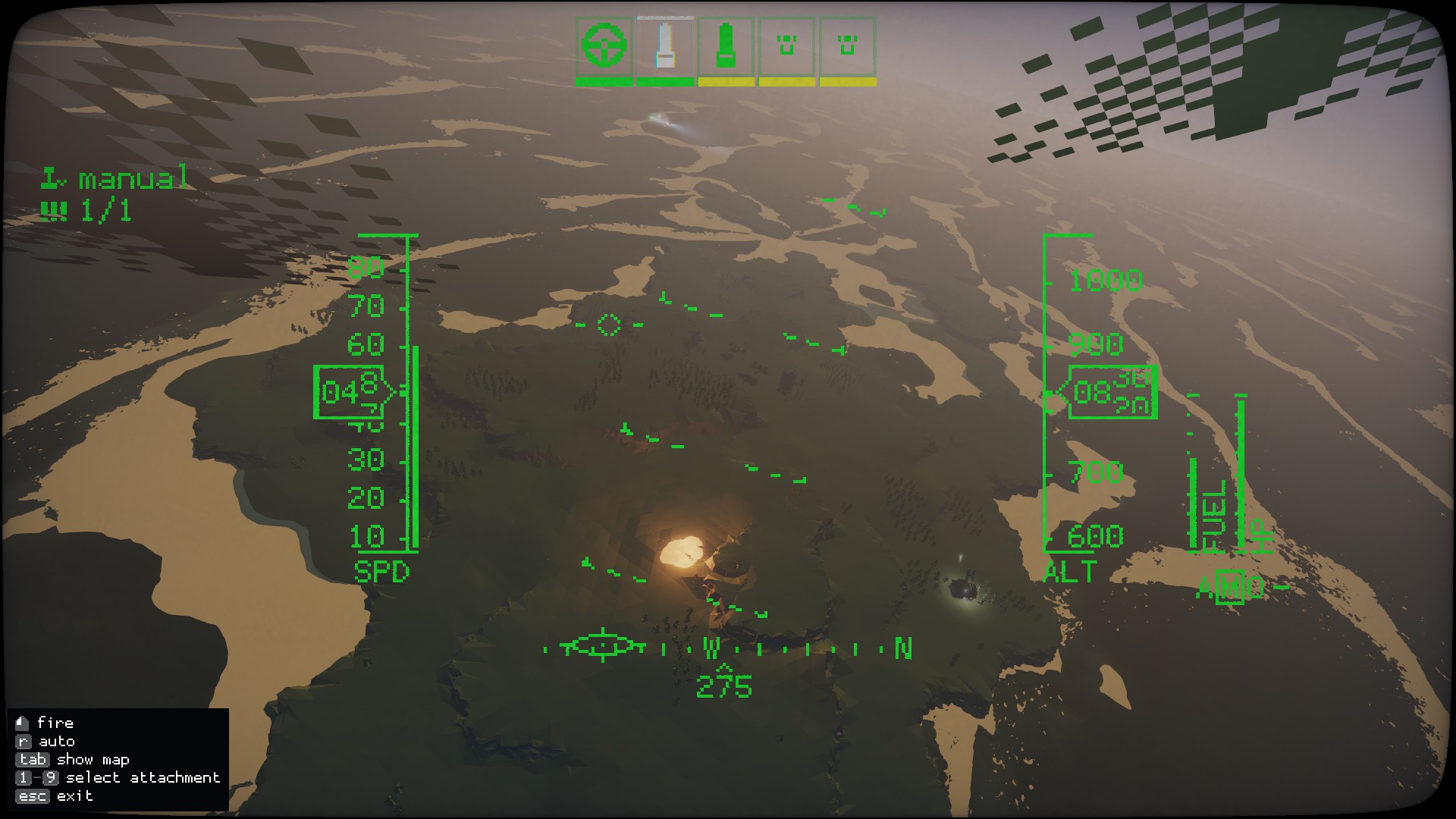 As things stand, spending prolonged periods away from your floating nerve centre, is asking for trouble. A lot can go awry in the time it takes to personally deliver a Razorbill’s bomb-load, or pulverise a vehicle column with a Seal’s main gun. 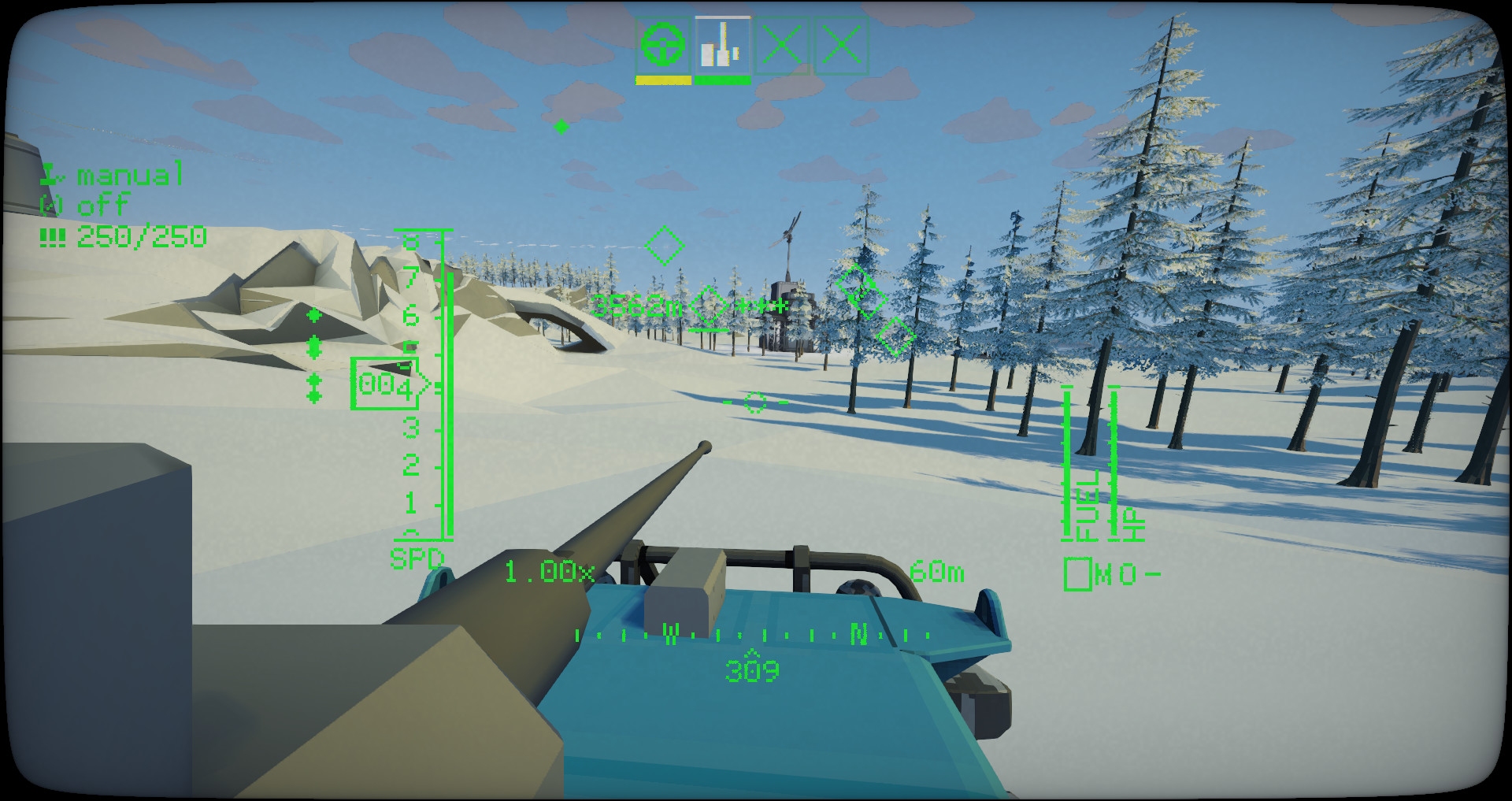 Turning a blind-eye to the UI and AI shortcomings would be significantly easier if there was an Early Access banner on the Steam page or a “PLANNED IMPROVEMENTS” post in the official forum. It’s hard to believe that MicroProse Mk II would let a game with Carrier Command 2’s potential to please, sail into the sunset with “CAVEAT EMPTOR” daubed on its flight deck, but right now there’s no evidence to suggest they won’t. 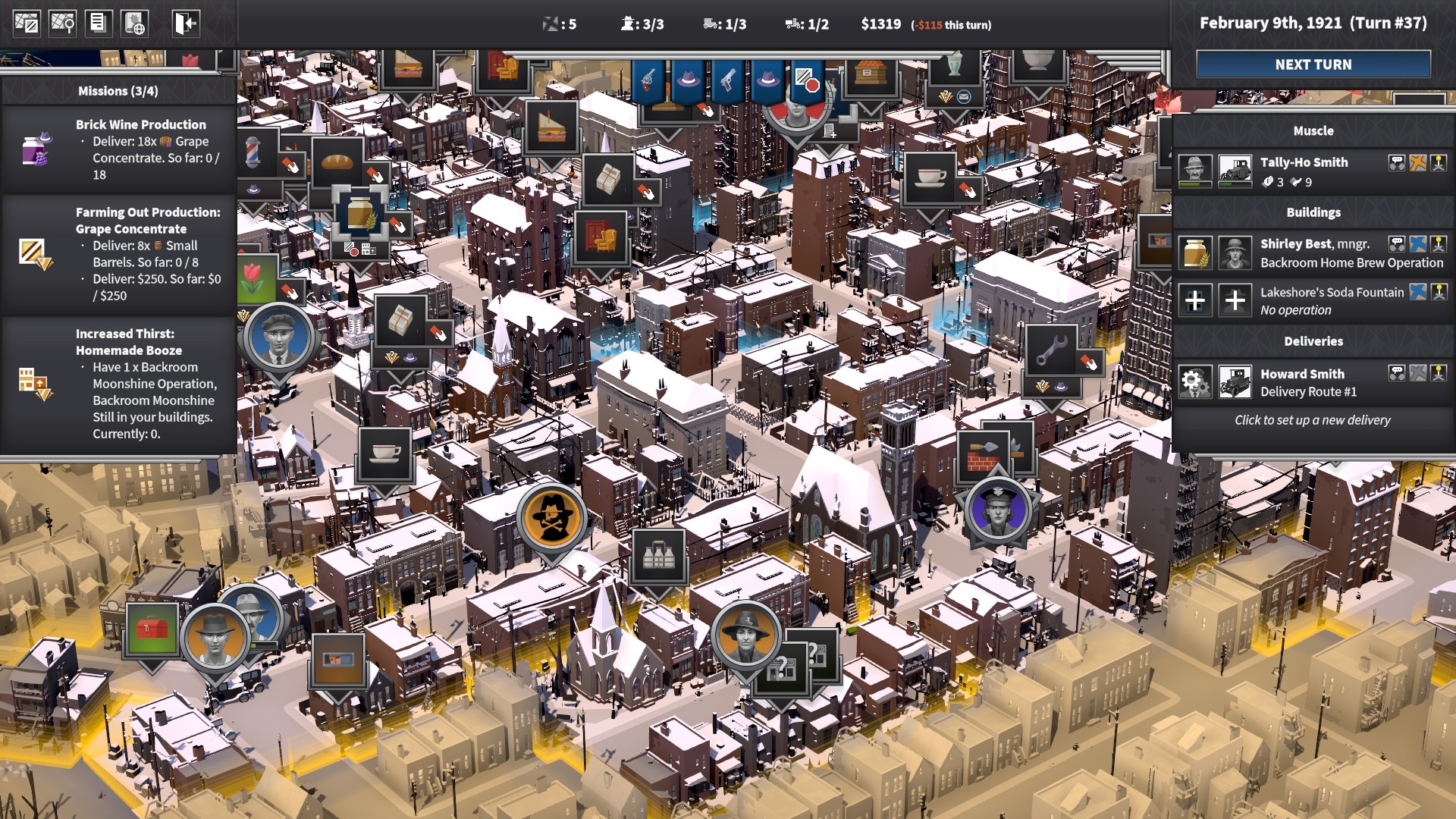 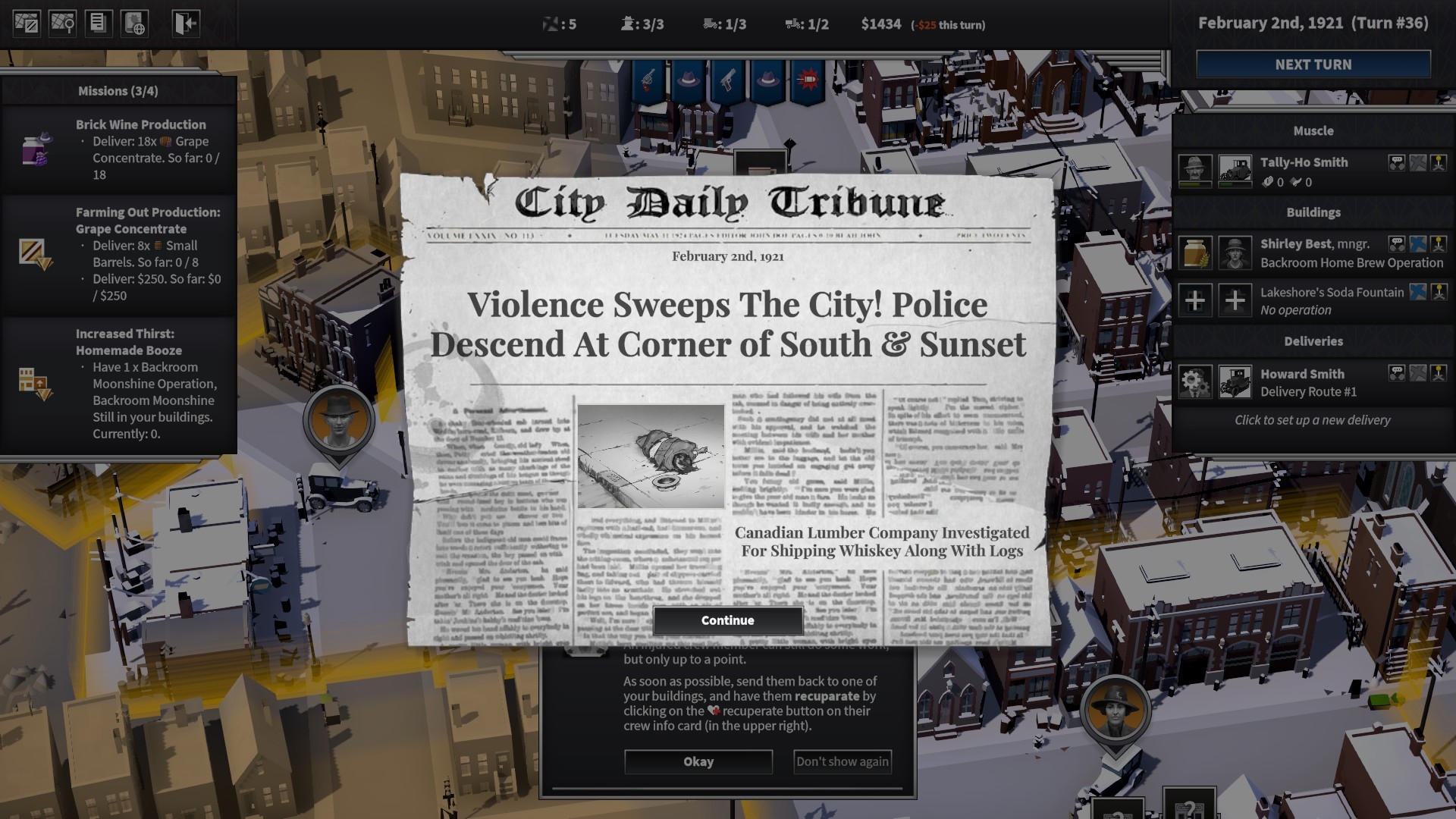 An hour or two into my first audience with City of Gangsters, a Prohibition-era management sim with sprawling cities, and an emphasis on cultivating relationships that makes perfect sense, I strayed onto Hogan’s turf in search of building materials for a new business venture. After discovering a sawmill too scared/loyal to trade with interlopers like me, I sought out the local panjandrum, hoping he’d see reason.

Sadly, all he saw was red. Upset by my brusque baseball bat diplomacy, Hogan returned with a blade at which point I broke out my heater. Result? My rival goes down like a sack of Idaho spuds, and the sawmill sells me what I need.

To be honest, even if Hogan had played ball he probably would have wound up horizontal. Restless after a morning of backroom brewing and beer deliveries, I was itching for a fight and curious to see whether the game’s combat was as rich and as its commerce.

It wasn’t (After surveying some stats and choosing a weapon from my jalopy’s armoury, invisible dice did the rest) which is a pity, as up until that point CoG had been doing almost everything right. 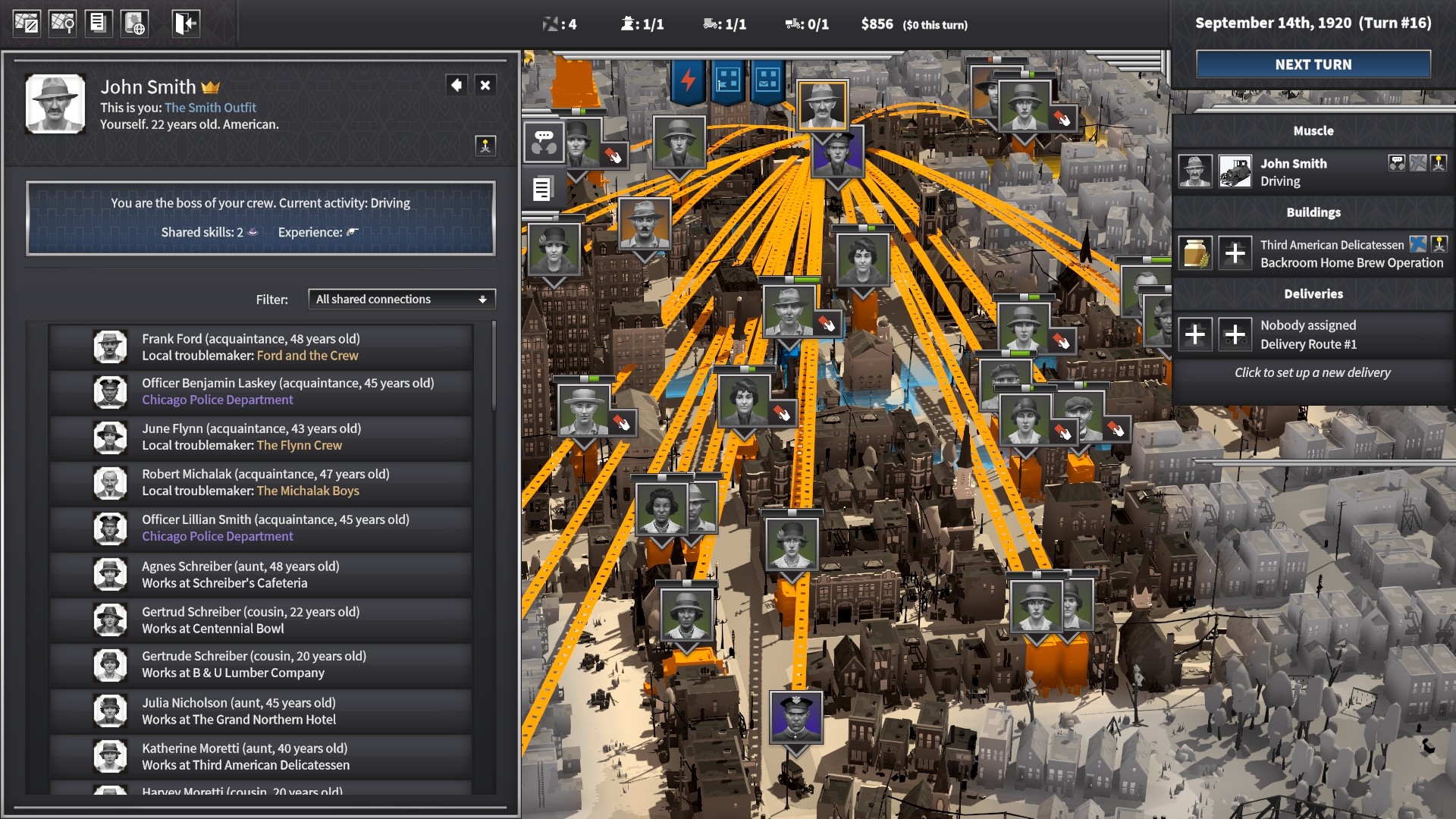 At the heart of SomaSim’s slightly-overwhelming-despite-an-extensive-tutorial-and-a-decent-in-game-encyclopedia TBS is a wonderfully intricate relationship system. Every business on the vast Chicago map (It’s possible to play in Detroit and Pittsburgh too) is run by a named proprietor with their own ethnicity-influenced family, social, and business networks. How you treat a contact effects how everyone in their circle regards you. 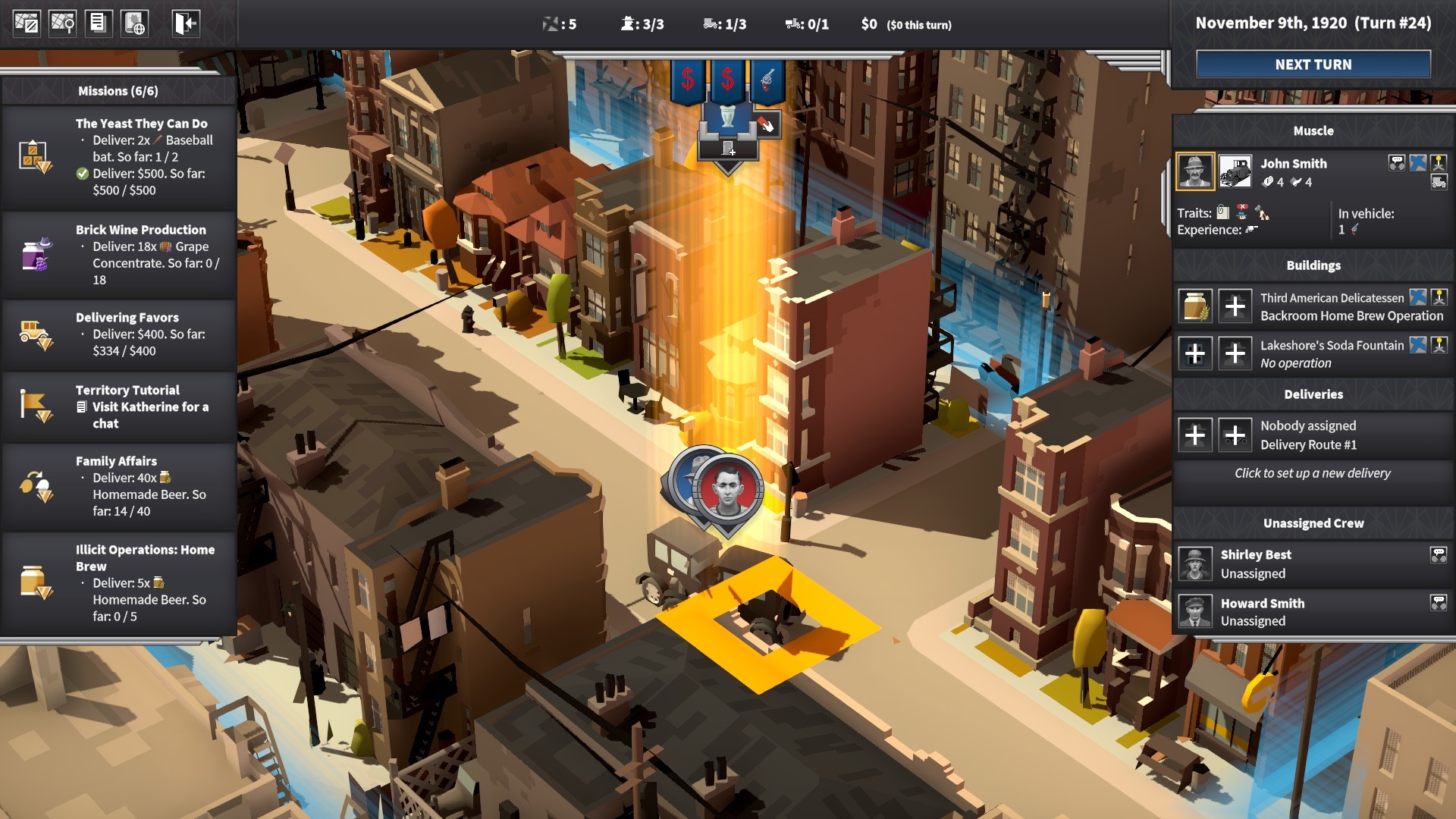 Making friends and proffering assistance on one ‘corner’ (the game’s smallest territorial unit) can open doors far away. Similarly, associates of the storekeeps you threaten, squeeze, or brutalise are unlikely to welcome you with open arms if and when you eventually run into them in person. Before you ‘invite’, with the aid of a knuckleduster or Molotov, that deli owner, druggist, or hotelier to take out property insurance with your firm, it’s probably a good idea checking they aren’t married to a cousin of the local Alphonse Capone. 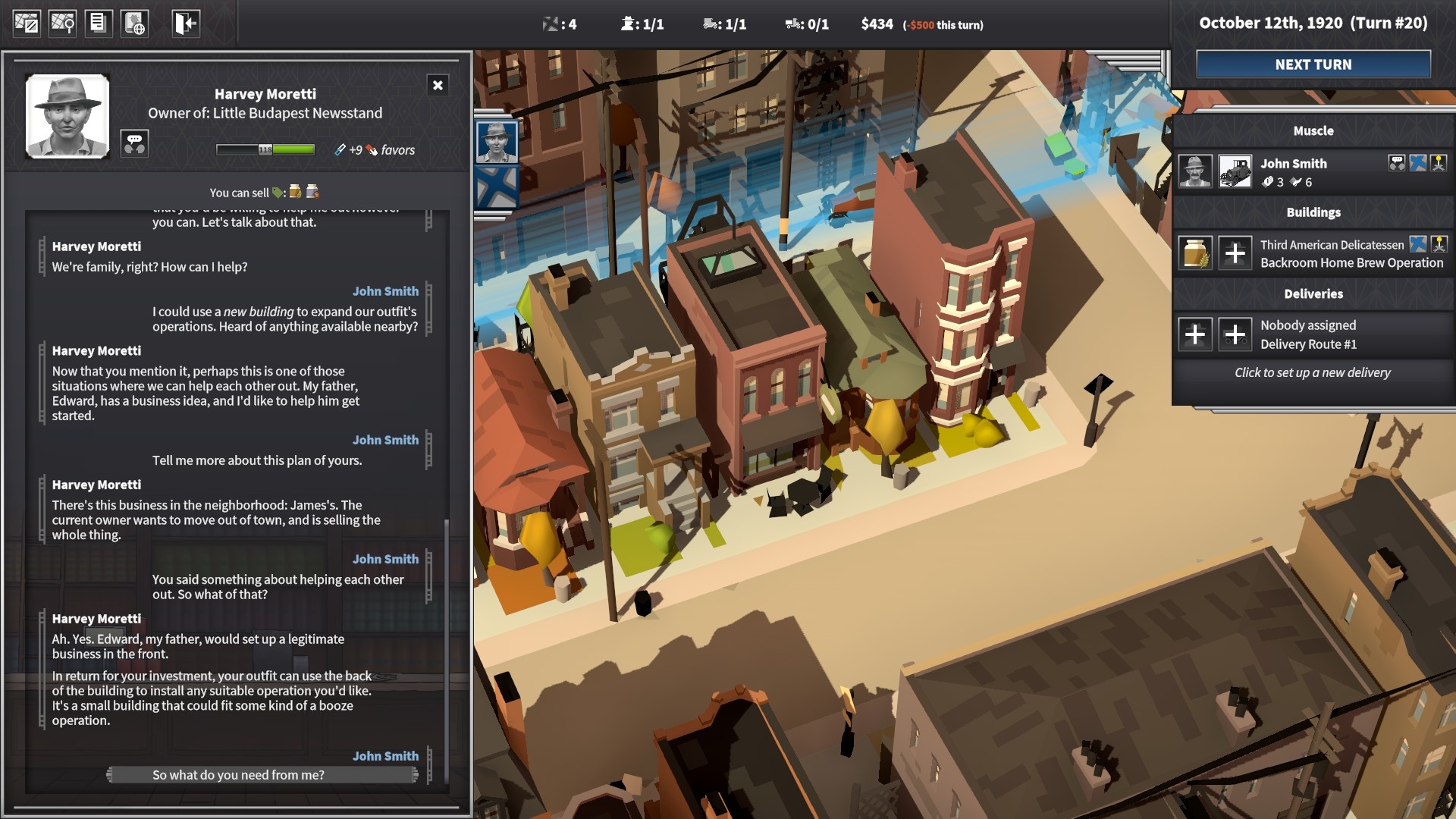 Empire expansion is done mainly though ‘fronts’, influence-extending outposts established in neighbouring areas with a mixture of cash and goodwill. When your territory starts rubbing against that of a rival, sparks fly. 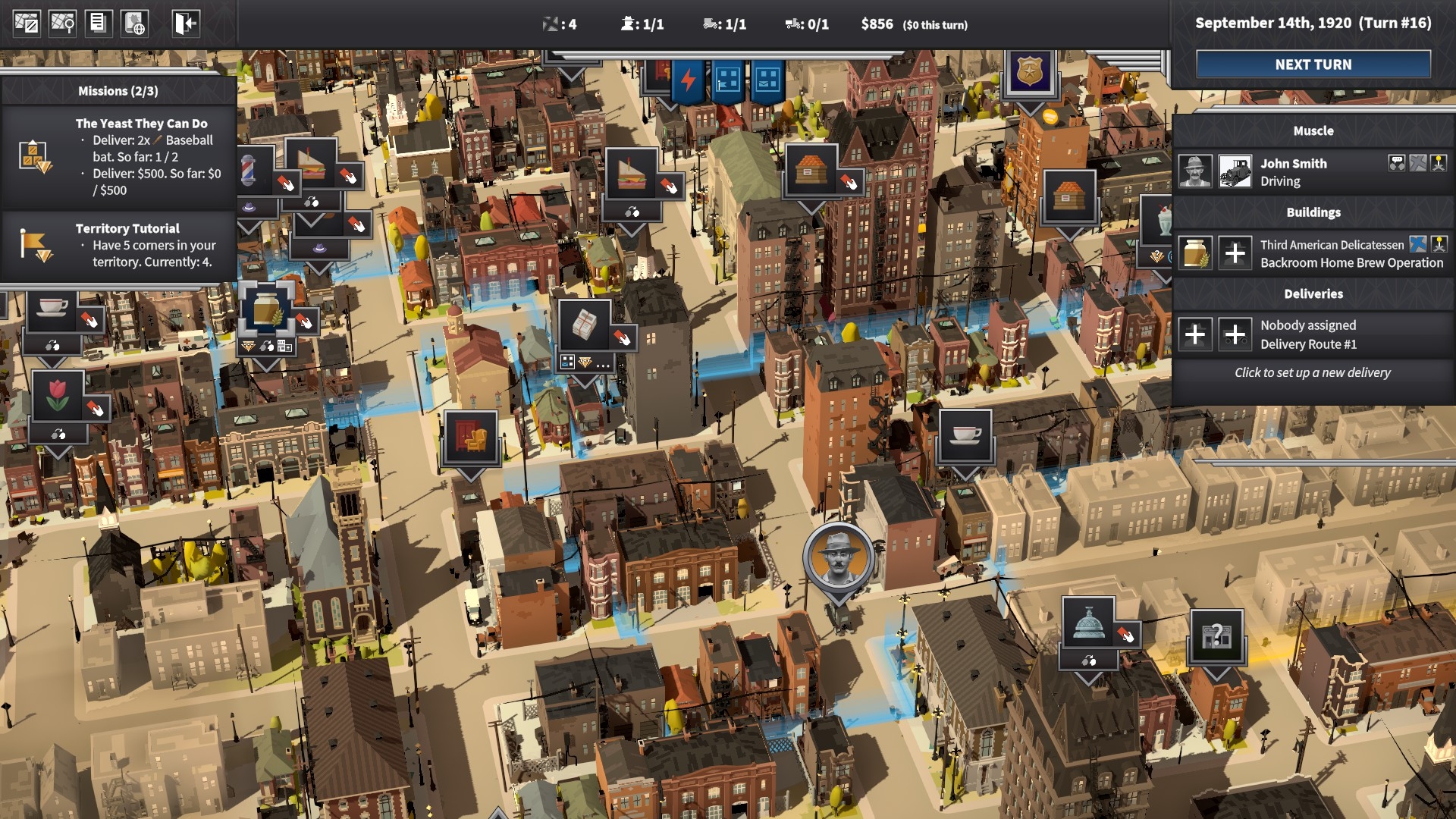 I’m keen to discover whether it’s possible to become a prosperous CoG kingpin without fashioning an elaborate network of backroom breweries and distilleries (the tutorial nudges you pretty forcibly into this line of business). Even with a pocket handkerchief-sized realm, and staff automatically collecting ingredients, arranging deliveries, and collecting payments – a stage I’ve just reached – making moulah from illegal alcohol is pretty labour intensive. If SomaSim force ambitious players to supply entire cities with hooch, the game’s fascinating interpersonal side is bound to end-up sidelined. 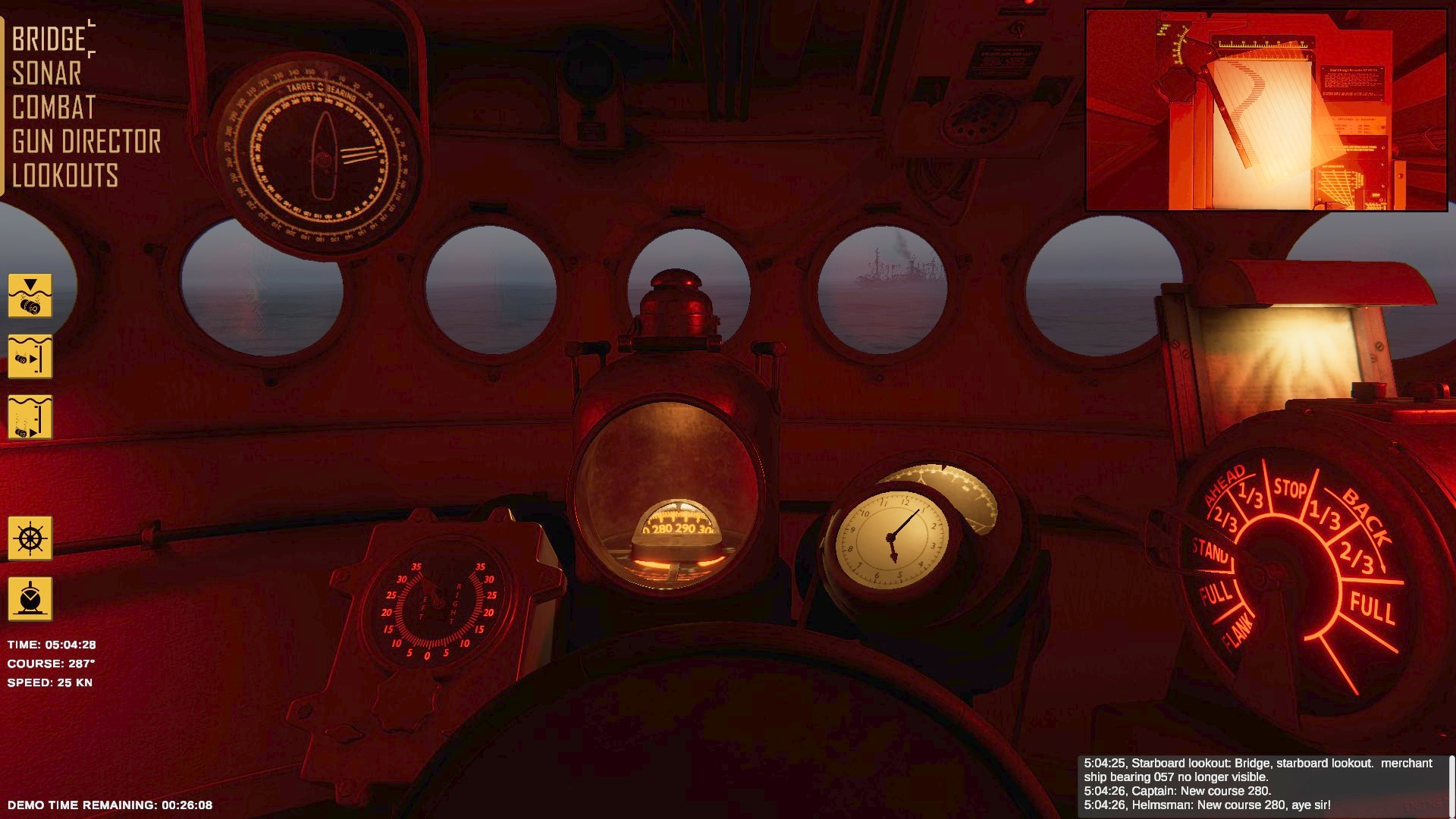 ‘Demo’, ‘playtest’ – call it what you will, the free Destroyer: The U-Boat Hunter taster available on Steam proves beyond a shadow of a doubt that a landmark WW2 combat simulation is on the horizon. 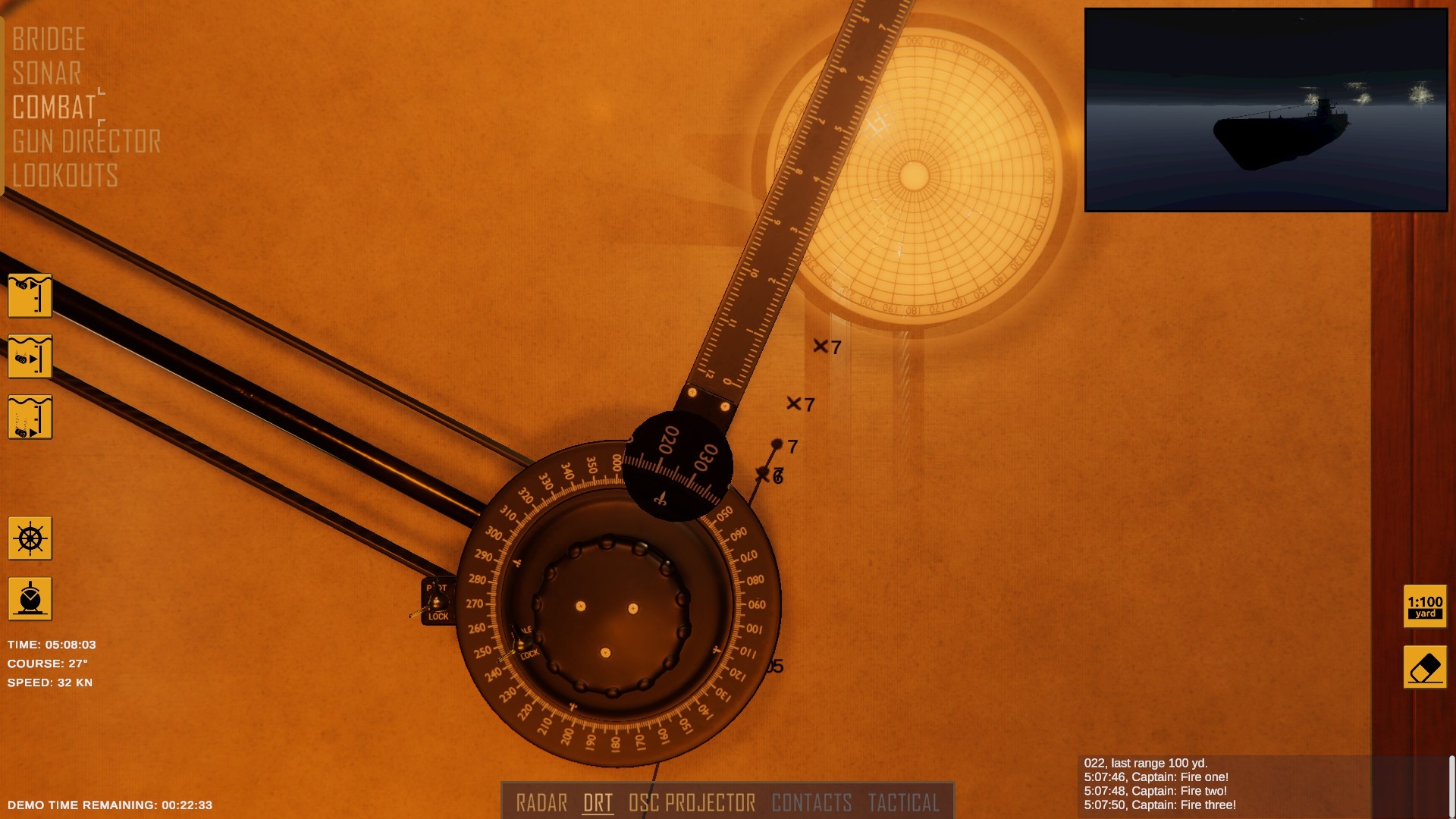 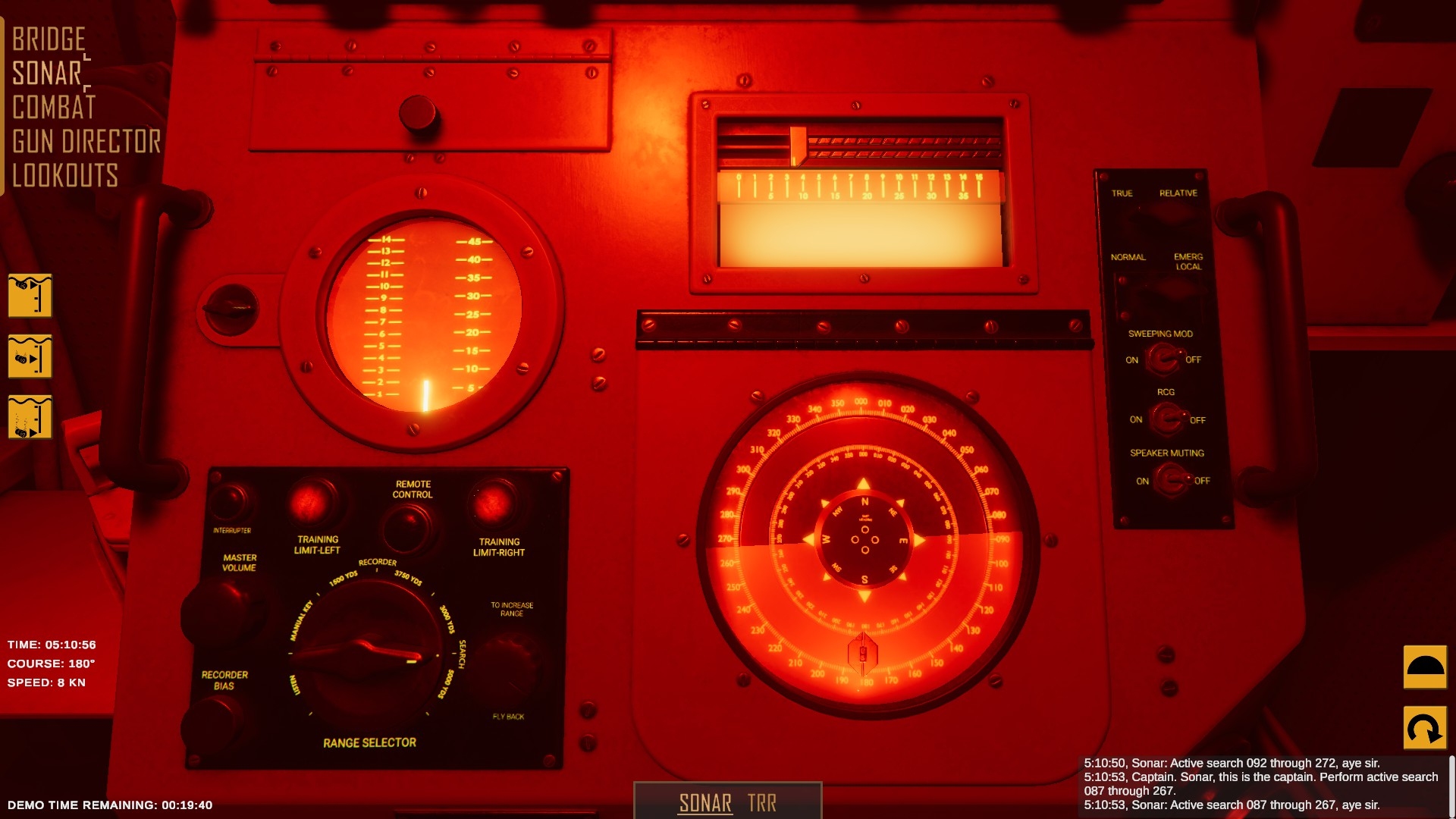 I’ve spent around four hours hunting Type VIIs so far and have yet to achieve a kill. If shepherding the game’s flotilla of unhelpfully unflappable liberty ships wasn’t so tense, believable, and atmospheric, this apparent lack of success would have sown frustration by now. 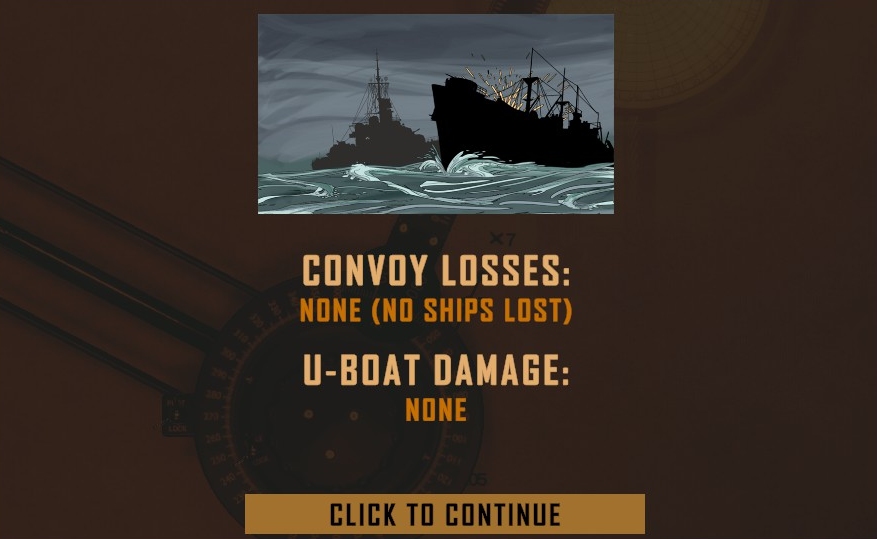 I say ‘apparent’ because a successful sortie in Destroyer doesn’t necessarily end with a stricken U-boat breaking the surface or plunging towards the seabed. Seeing a screen like the one above appear after an hour of helmsman-wearying cat-and-mouse and cod-walloping depth charge attacks, is surprisingly gratifying. 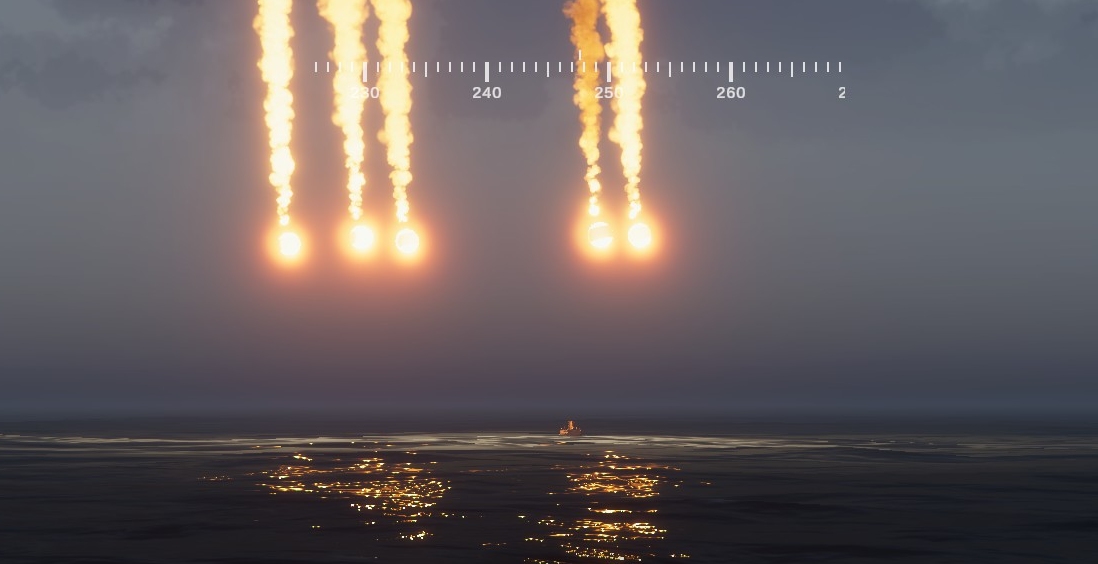 The masochistic, realism-revering part of me, hopes that planned improvements such as external cameras, more communicative look-outs and sonar operators, and “auto-plot for DRT & OSC” (AI assistants will update the plotting table if you’d rather not wield a chinagraph pencil and articulated protractor) are counterbalanced by refinements in foe AI. The Kretschmers, Topps, and Priens who molest flocks in the demo, expose their periscopes a little too readily and arguably don’t show searchlights and star shells the respect they deserve. 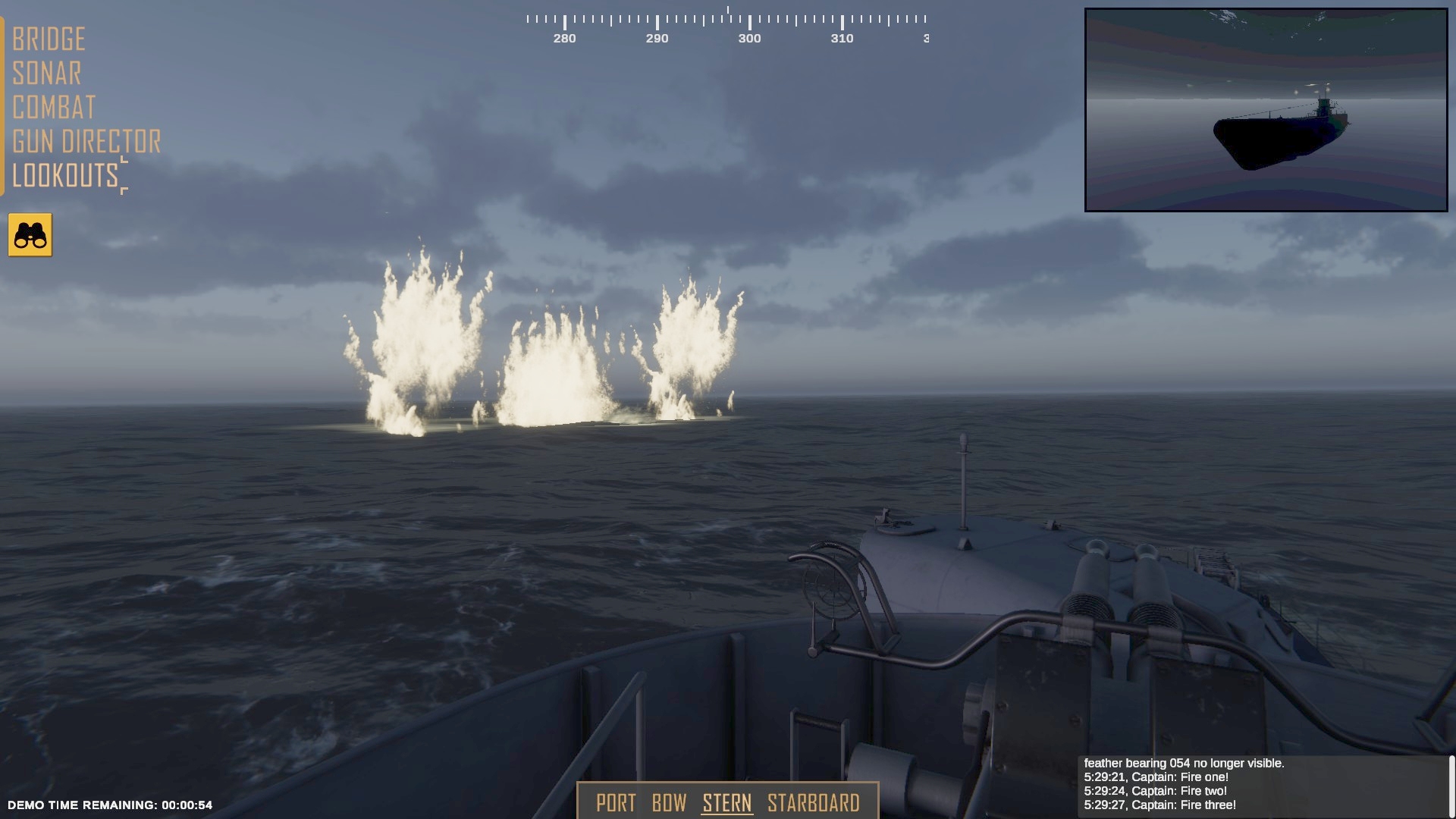 I’m also hoping to see “Replays” added to the roadmap at some point. When bagging sly sea wolves is this tricky, I think it’s only fair to let escort captains savour their triumphs with subsurface cameras, slo-mo options, and tank sim-style damage labels, once engagements are over.