To qualify for a ‘Dusty But Trusty’ article, a game must be old enough to vote in the Federated States of Micronesia, buy tobacco in Algeria, and serve in the Pontifical Swiss Guard. More importantly, it must be demonstrably super, smashing, great, ace, wizard, bonzer, the knees of the bee, the testicles of the dog, and the whiskers and pyjamas of the cat. You don’t need rose-tinted pince-nez or a cutting-edge pixel pump to enjoy 24 karat golden oldies like… Airborne Assault: Red Devils Over Arnhem. 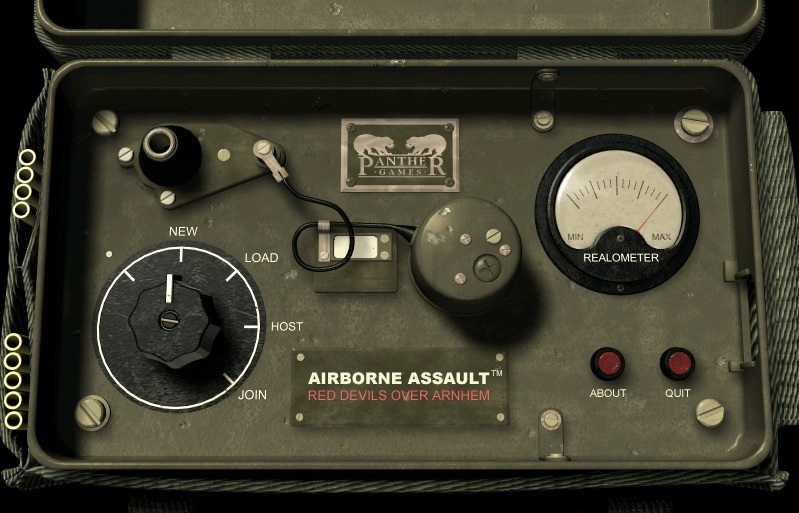 In 2002, with a little help from Battlefront.com, Panther Games released a turn- and hexless Market Garden command sim that made existing operational titles seem awfully old beret. If you’ve never played Airborne Assault: Red Devils Over Arnhem or any of its descendants, and want a quick insight into why I believe it deserves to sit alongside greats like Combat Mission: Beyond Overlord and Close Combat 2 in computer wargaming’s Hall of Fame, follow these simple steps: 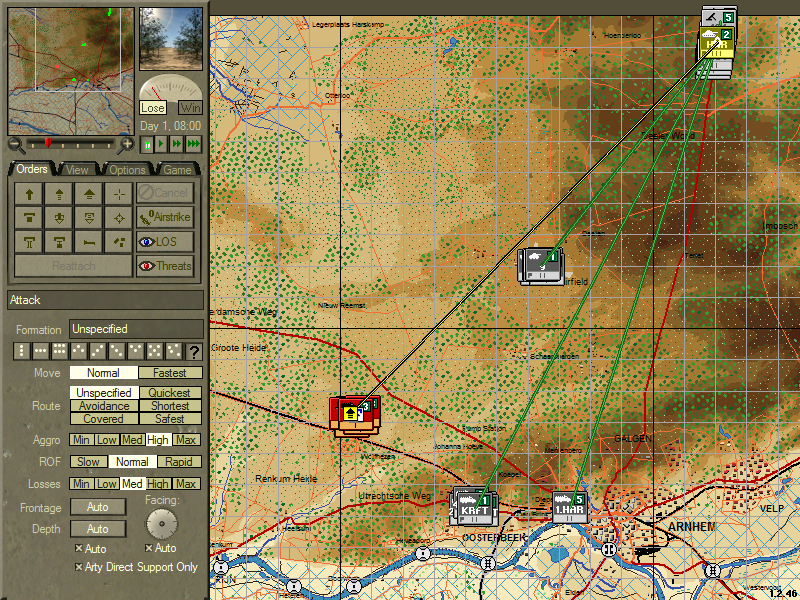 For the benefit of those who aren’t in a position to try the above, by clicking on Kampfrguppe Harder’s HQ counter, the highest ranking German unit in the tutorial, followed by the Brits on the Reijers Camp DZ, you’re effectively giving orders to every Axis counter on the map. 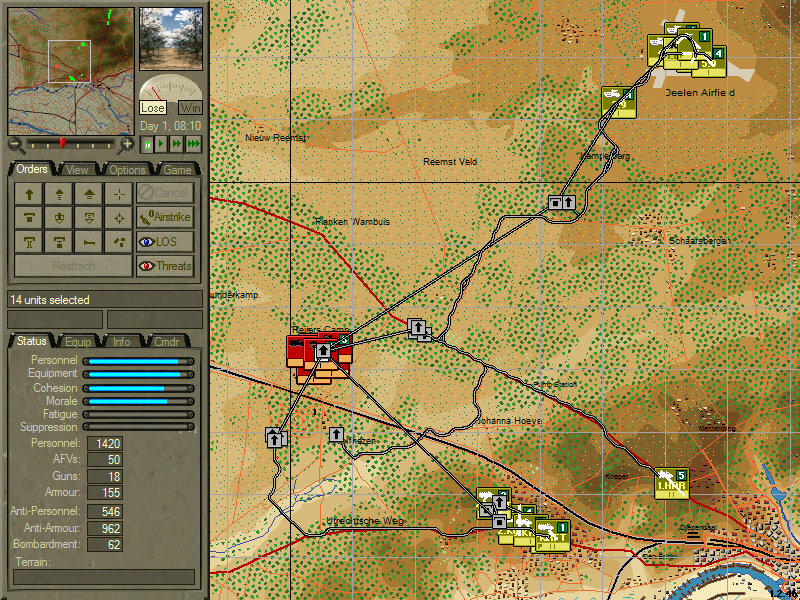 Behind the scenes, Obersturmführer A. Harder swiftly (How swiftly is determined by his efficiency rating and the ‘order delay’ setting you selected before starting the scenario) radios instructions to his dispersed assets. Using top-notch customisable pathfinding routines, multi-chit units such as the SS Panzer Recon battalion at Deleen Airfield and KG Krafft in Oosterbeek hasten towards the objective, dropping off reserve and fire support elements as they go. Before stirring, their respective stat-endowed commanders have chosen Forming Up Points – spots hopefully hidden from prying eyes where road columns will shake-out into appropriate attack formations. 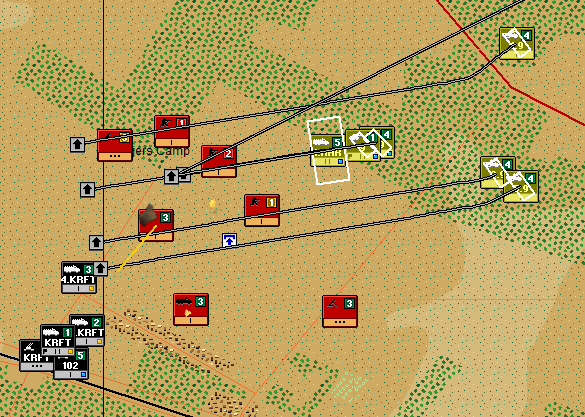 Shortly after those FUPs have been reached, the red devils on the silk-strewn DZ begin receiving fire from the woods to the south-west and north-east. The NE jaw of the closing German vice is case-hardened by the recon battalion’s halftracks and armoured cars. The SW one may include AFVs too if Harder decides to lend some of his Sonderkraftfahrzeugs and Panzers to vehicle-poor Krafft. Both jaws profit from the timely deluge of 120mm and 81mm mortar bombs provided by the distant, out-of-harm’s-way support batteries. 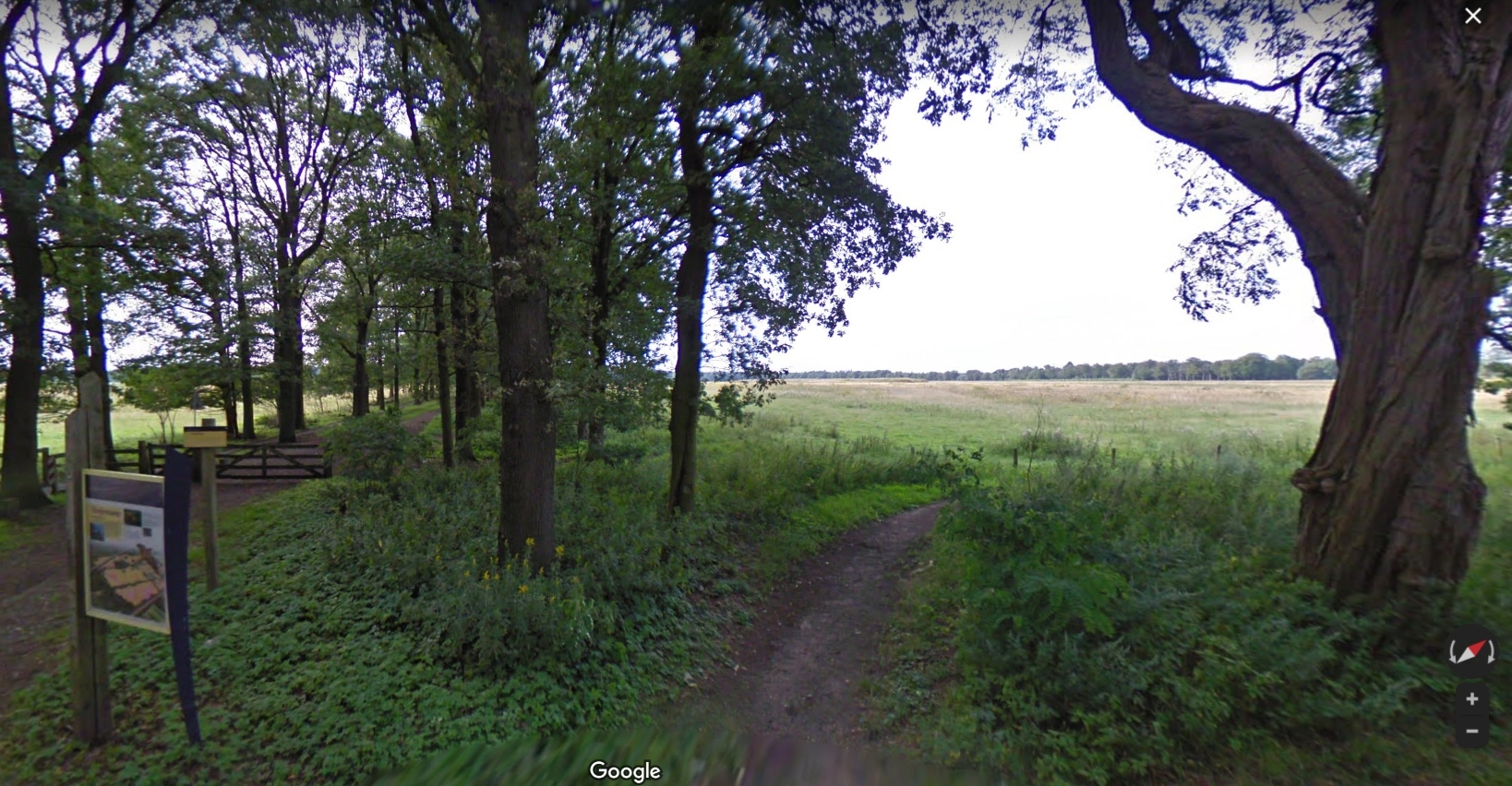 In most playthroughs (fuzzy logic and intricate, randomness-leavened combat maths mean nothing is guaranteed) it won’t take long for the outgunned and exposed Brits to realise their position is untenable and begin retreating towards the plantations of Buunderkamp.

Twenty years on, the fact that this mesmerising spectacle – this jawdropping display of unscripted organisational prowess – can be set in motion with just two mouse clicks still amazes me. Two decades of ‘progress’ later, and Panther Games’ AI routines and approach to delegation remains unsurpassed. 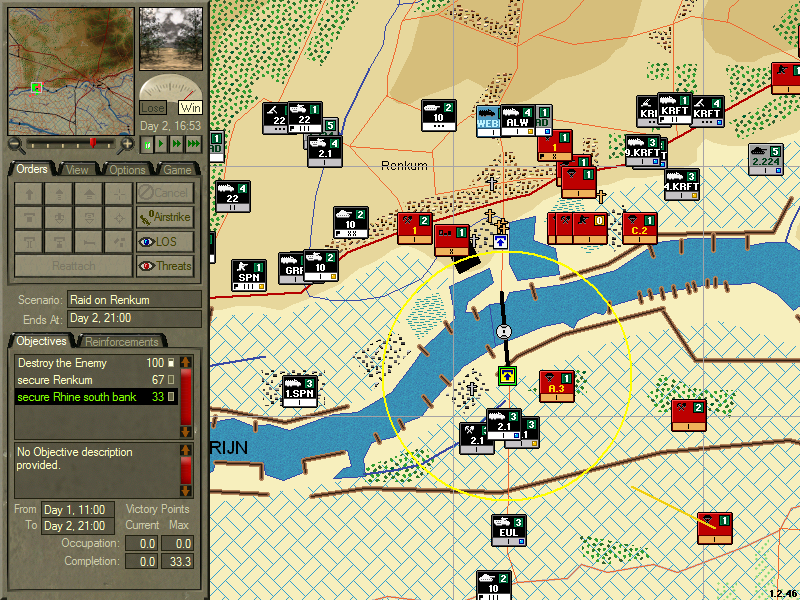 The game was so far ahead of its time that some hexophiles failed to bond with it. Self-confident subordinates, easily-missed order subtleties, and a clock that only stopped when you prodded the spacebar, led to some purchasers accusing RDOA of “playing itself”. 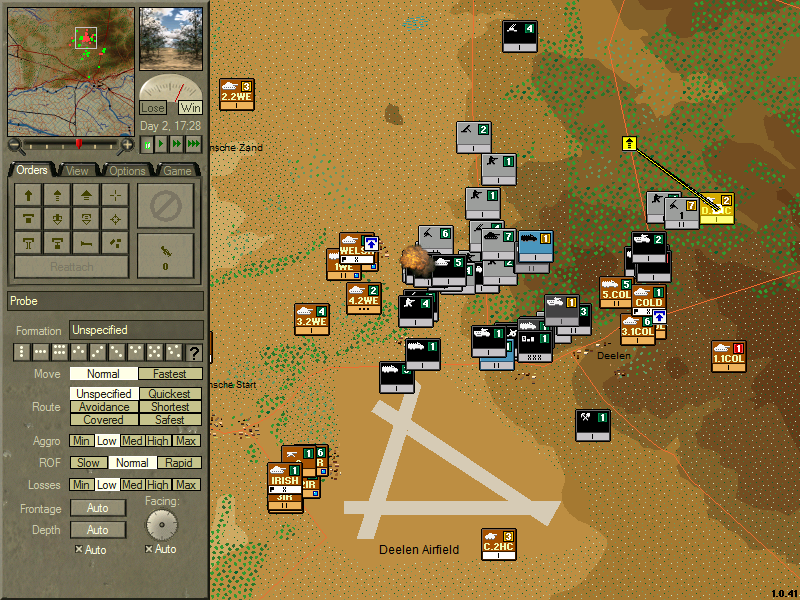 I suspect many of the unconvinced never discovered the indispensable ‘in-situ’ button, or learned to accept the chaos that gnaws at the edges of every RDOA engagement. They were either over-relying on the game’s powerful delegation system or – accustomed to perfect control – were fighting it at every turn. 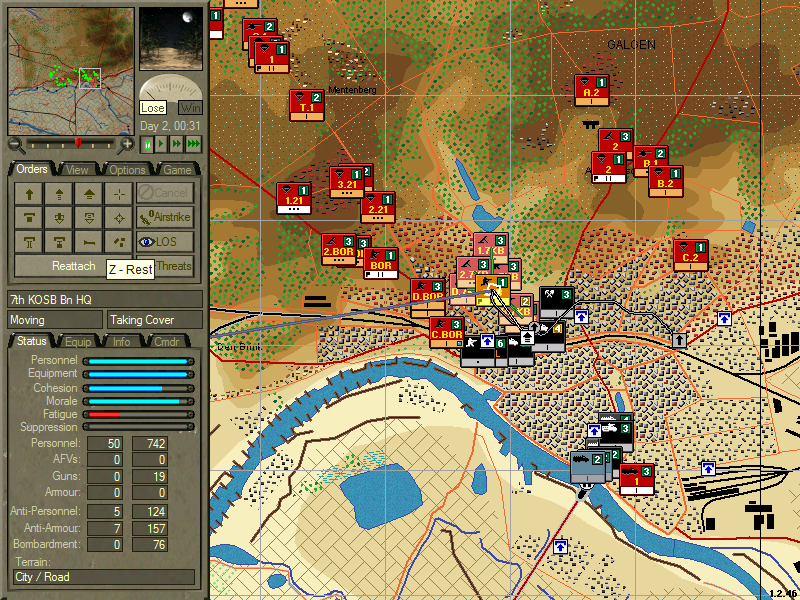 As brilliant as the game’s AI code is, it’s not flawless and it can’t read your mind. Yes, you can sometimes take Victory Locations by slapping “attack” icons on top of them after selecting your biggest bigwig, but generally you’ll want to split and customise forces, and nuance orders with waypoints and modifiers. Dispatched to the Arnhem Road Bridge with a bog-standard move order, the 1st Airborne’s Recce Squadron may well get there. However, adding a few waypoints and clicking one or two behaviour buttons in the sidebar will improve their chances of arriving promptly and with most of their jeeps intact. 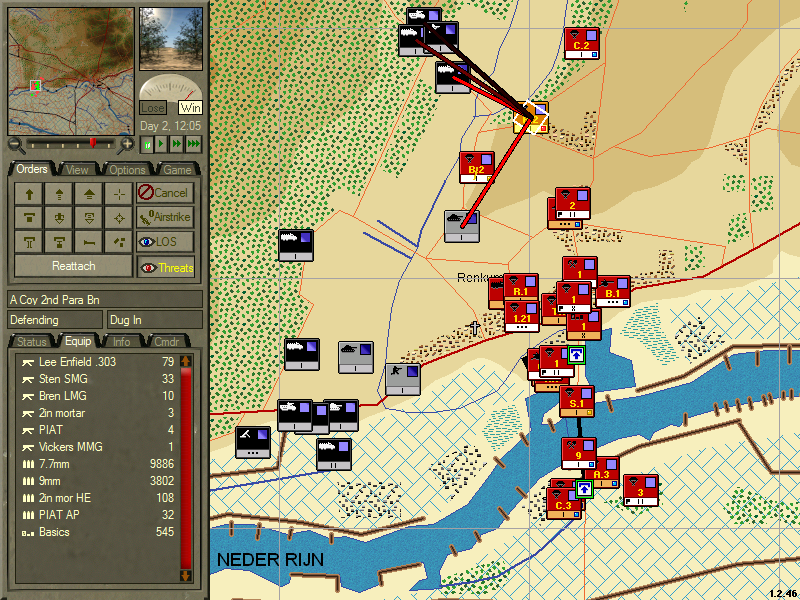 Sure, you could guard the environs of the recently de-foed Renkum crossing by selecting the 2nd Parachute Battalion HQ, pressing ‘D’ (defend), and clicking the VL, but silicon John Frost’s troop dispositions may not be exactly what you’re after. If he thinks his AT battery should dig-in in the polder NW of the river and you’d rather site them in the factory near the road junction, no problem – detach them and move them there. 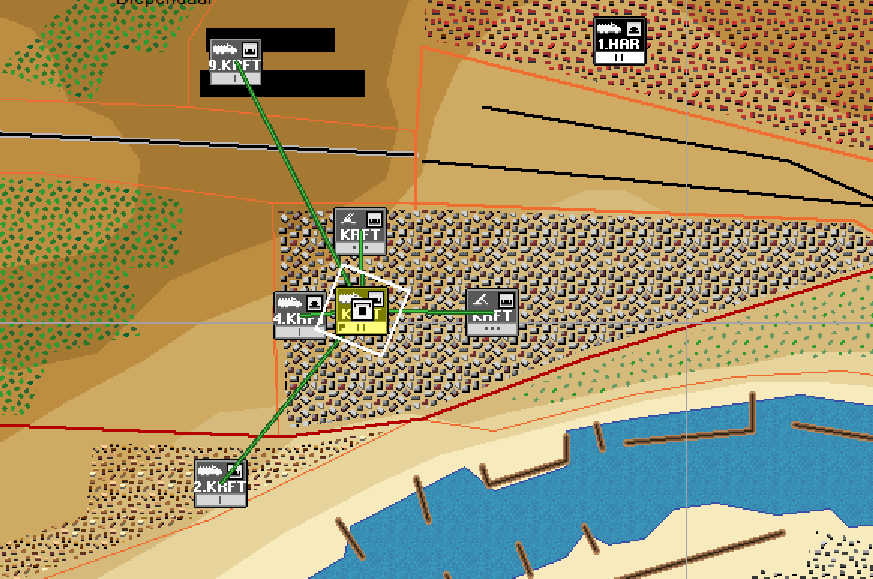 What’s that you say? After detaching the AT battery, that nitwit* Frost decides to rearrange all the units still under his control, abandoning carefully-prepared trenches and foxholes in the process? That’s where the worth-its-weight-in-PIAT-ammunition ‘in-situ’ button comes in handy. Ensure his ‘defend’ order has an ‘in-situ’ modifier and he won’t constantly re-plan while you tweak.

* Frost is actually reacting logically to what he perceives as a hole in his defences. 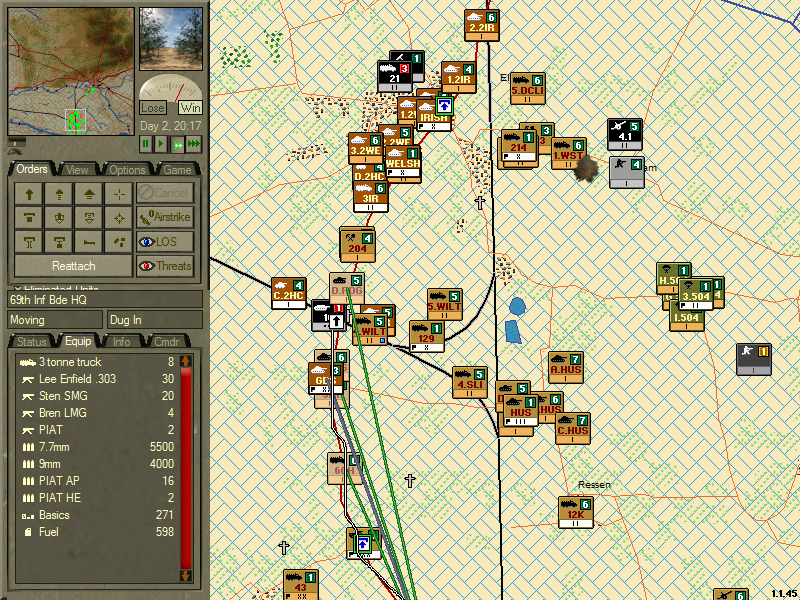 Once you’ve mastered tricks like this and have noticed how much trouble a company of paratroopers lurking near a city junction or forest road can cause, RDOA truly blossoms. You’re now ready to move from bijou scenarios like Heartbreak Ridge (12 hours), Raid on Renkum (1 day, 10 hours), and The Airfield (1 day, 14 hours) to one of the half-dozen variants of the full nine-day campaign. All of the latter capture the flavour and challenges of the northern portion* of Operation Market Garden uncommonly well. The race for the Arnhem road bridge. The desperate fight to hold it until Sherman-shaped salvation arrives from the south. PIATs versus Panzers… Poles ‘n’ polder… “Out of ammo, God Save The King”… it’s all here.

* Sequel Highway to the Reich added Nijmegen and Eindhoven scenarios. 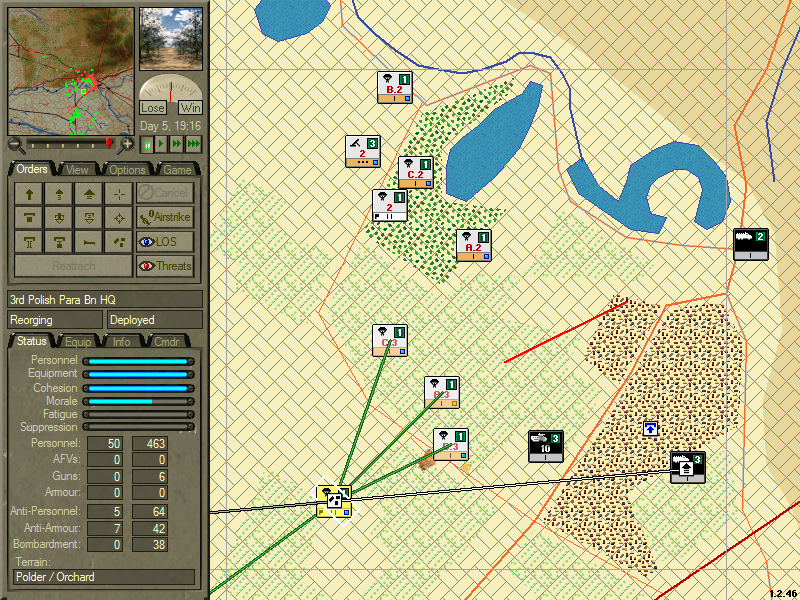 Playing as the Allies, you’ll find yourself breathing a sigh of relief when night falls. The reduced visibility doesn’t guarantee respite from German attacks, but it makes resting and rearranging weary, battered forces that bit easier. 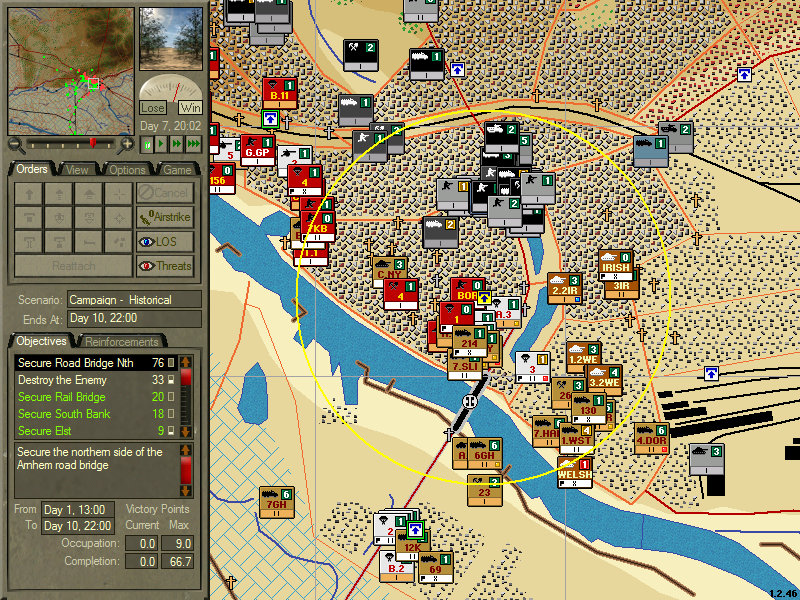 If you’re not careful you’ll also find yourself fighting half-a-dozen small battles rather than one big one. Because enemies understand that sometimes it’s better to skirt areas of stubborn resistance than try to steamroller them, black (SS), grey (Heer), and blue (Luftwaffe) counters are adept at finding holes in stretched lines and exploiting them. Knots of foes can quietly slip away from one area of the map, turning up hours later somewhere far away. Shrouded in thick Fog of War and powered by those zesty AI routines, RDOA scraps seethe and pulse, distort and disintegrate in ways that make believing in them bally easy. 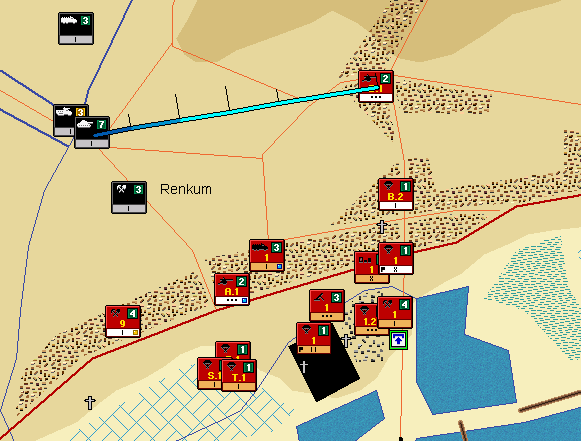 True, there are occasional combat convulsions that damage rather than bolster the illusion. A hidden movement grid that’s coarser than the map graphics suggest, and retreat code that, from time to time, produces unlikely flights, were – together with things like crude logistics, a primitive LoS tool, and relatively uncommunicative counters – weaknesses Panther addressed in sequels Highway to the Reich and Conquest of the Aegean. 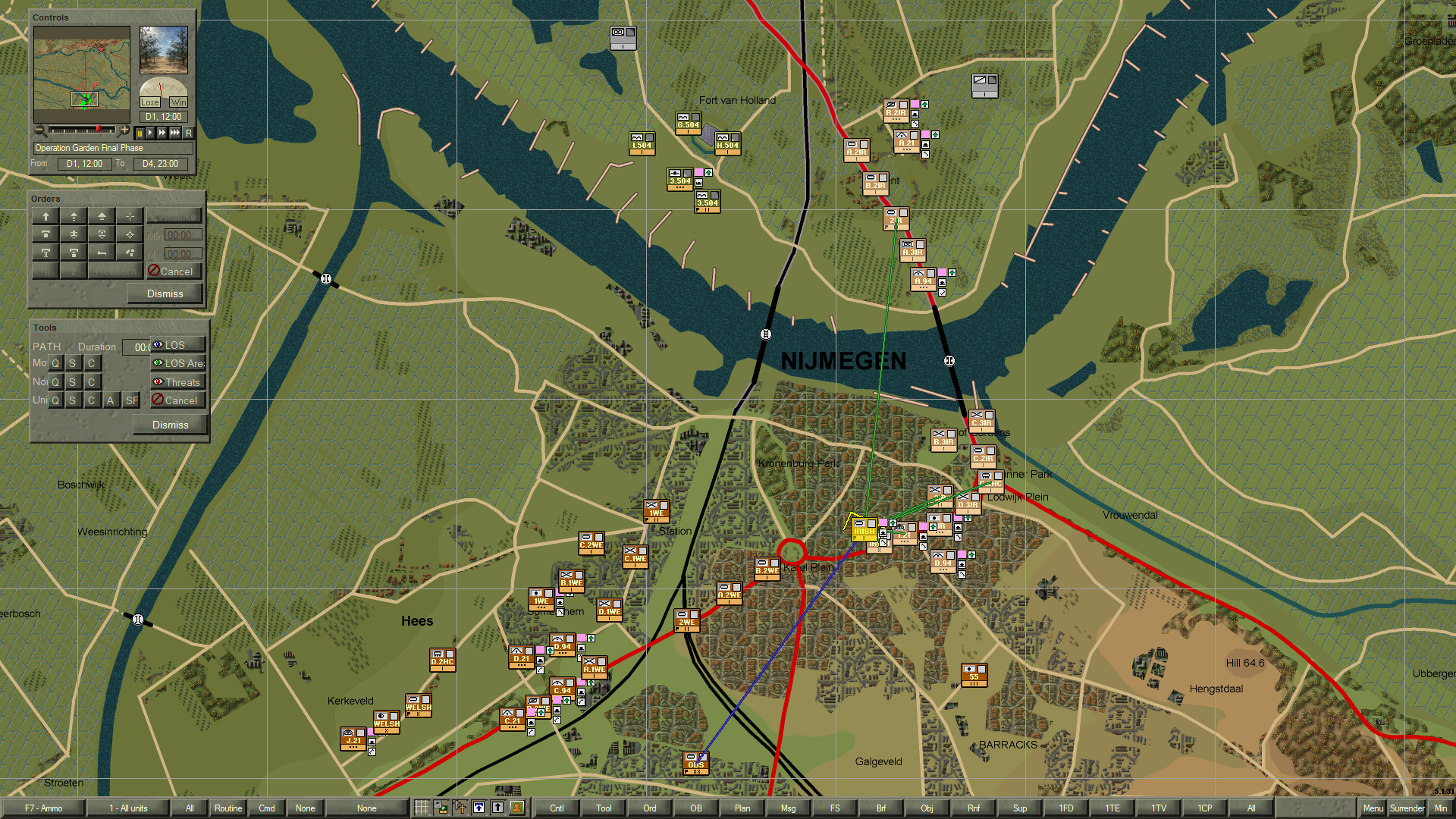 Modular Command Ops 2, the current engine version, is superior to RDOA in all these areas. What it’s not, sadly, is anywhere near as easy on ageing mince pies as bright, legible RDOA. One of a growing band of modern wargames determined to wreck my deteriorating eyesight with titchy fonts and confetti-sized counters, CO2 is a game that I love and loathe in equal measure. Give me RDOA with its as-big-as-Panzer-fists chits and clear Splittertarn maps! 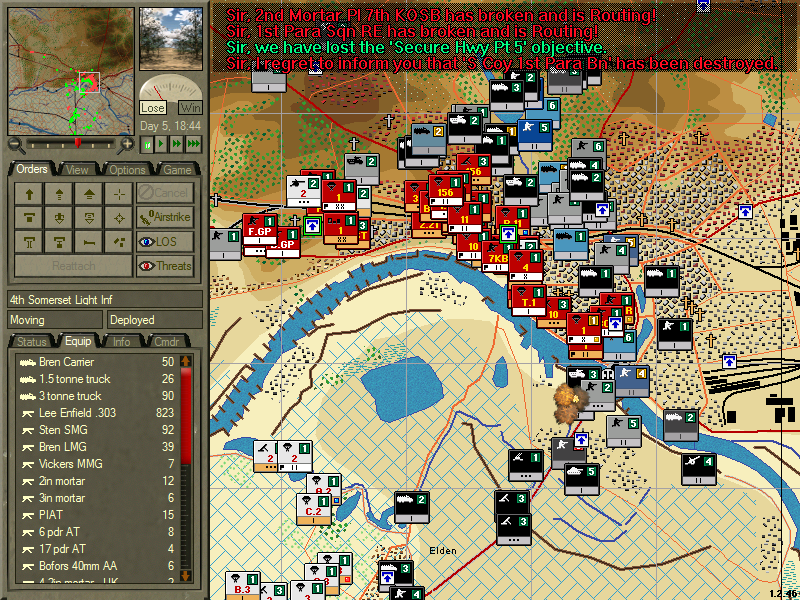 Why doesn’t this heartfelt billet-doux end with with a Steam or GOG link? Why do people interested in playing this marvellous milestone today need to scour secondhand shops, eBay, and dodgy abandonware sites, for a copy? Only Panther Games can answer these questions with any authority. If I manage to winkle an explanation out of studio head Dave O’Connor in the coming week, I’ll airdrop it here on Renkum Heide… 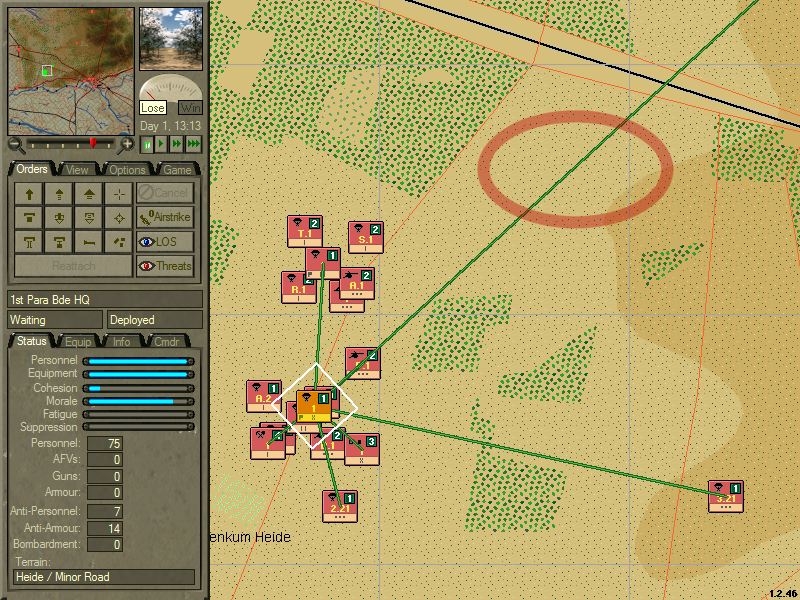 …when I receive it. 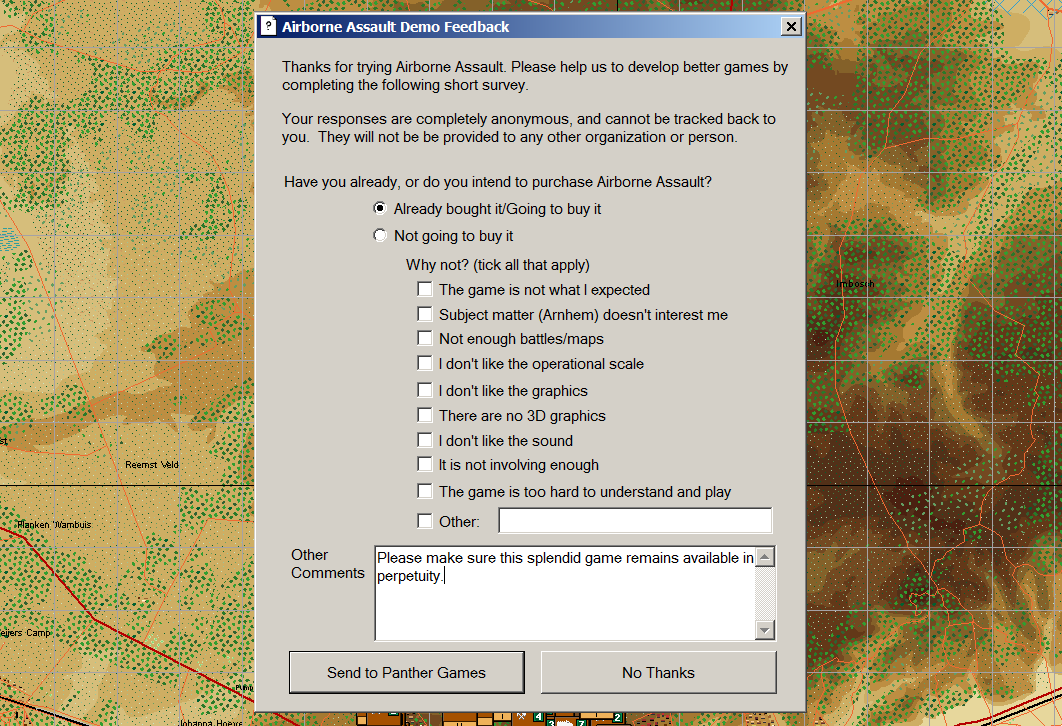