To qualify for a Dusty But Trusty article, a game must be old enough to vote in Nicaragua, buy tobacco in Djibouti, and make the beast with two backs in Nepal. More importantly, it must be demonstrably super, smashing, great, ace, wizard, bonzer, the knees of the bee, the testicles of the dog, and the whiskers and pyjamas of the cat. You don’t need rose-tinted pince-nez or a cutting-edge pixel pump to enjoy 24 karat golden oldies like… Silent Storm.

If my fond memories of this nineteen-year-old Jagged Alliance-style TBT are trustworthy, it doesn’t matter which campaign mission or random encounter I pick as the basis for today’s feature. All Silent Storm outings produce enough tension, spectacle, and surprises to make memorable After Action Reports. 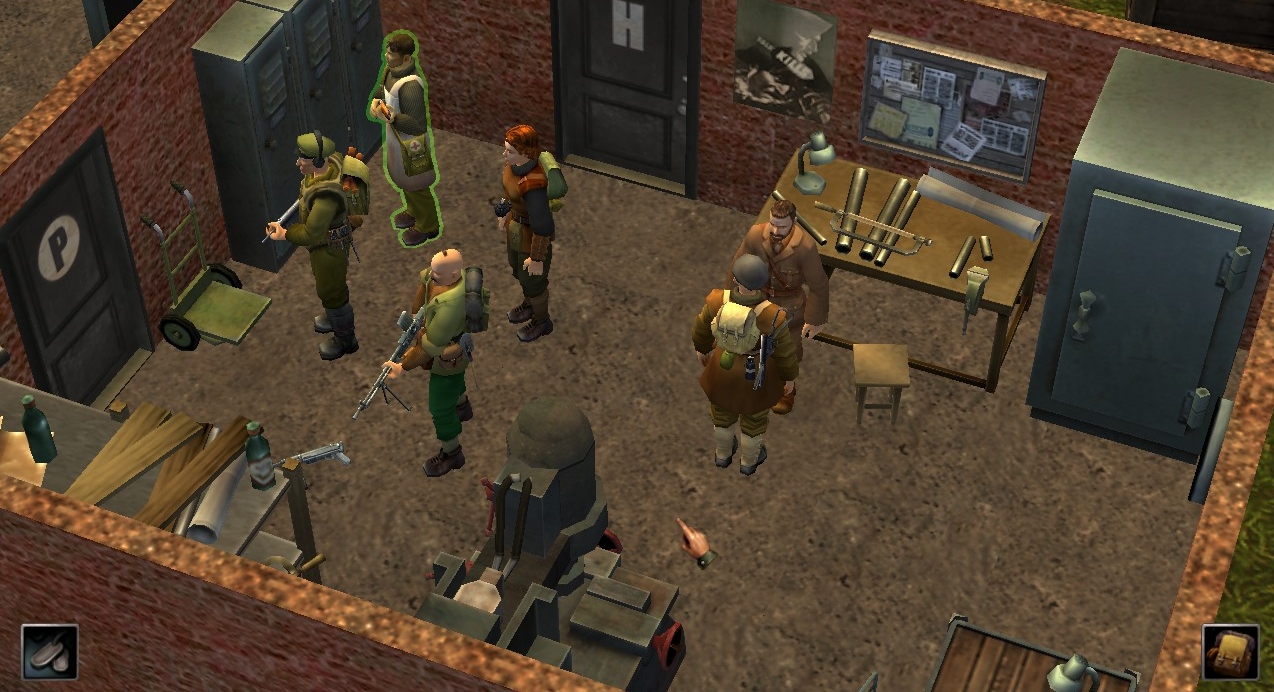 Reinstalling after a long separation, I choose a cobwebbed savegame at random and find, after a lightning-quick load, five relatively callow SOE operatives waiting patiently for their next assignment. 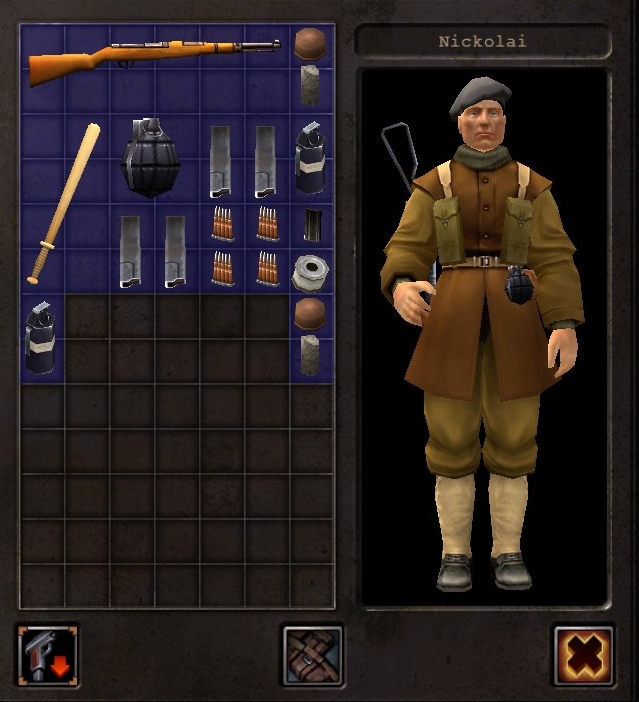 Born in Leningrad but educated at the Royal Military Academy, Woolwich, ‘soldier’ Nickolai is the Sten and Gewehr 33/40 armed leader of the quintet. 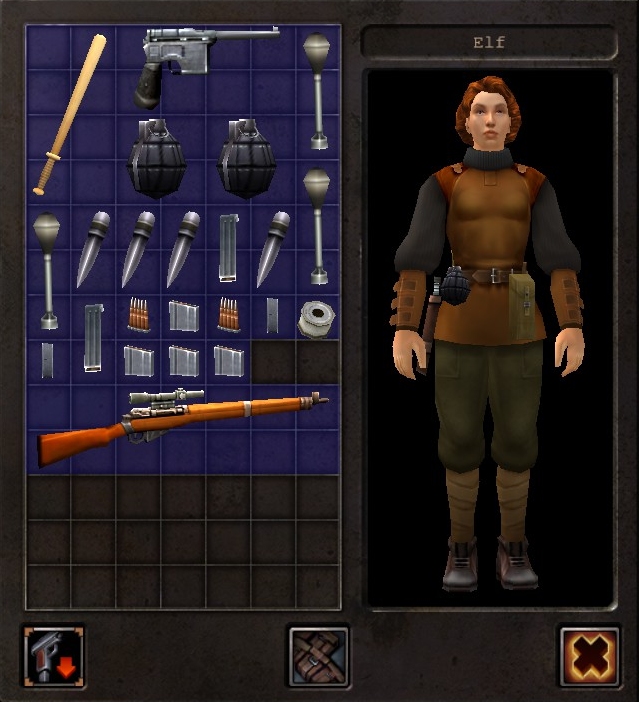 Flame-haired scout, Erin ‘Elf’ Farrell, hails from Northern Ireland and, judging by her current loadout, likes to do her long-range liquidating with a scoped rifle and close-quarters work with hurled knives or a broomhandle Mauser. 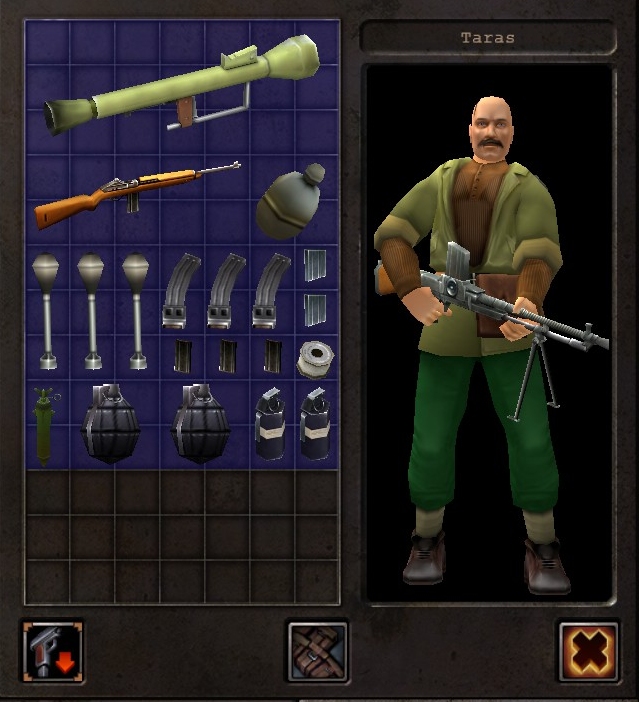 Ukrainian grenadier Taras Petrenko totes, amongst other things, a weighty LMG of Czech manufacture and the game’s fictional Panzerfaust/Panzerschreck hybrid. Both weapons are probably trophies from an earlier excursion. 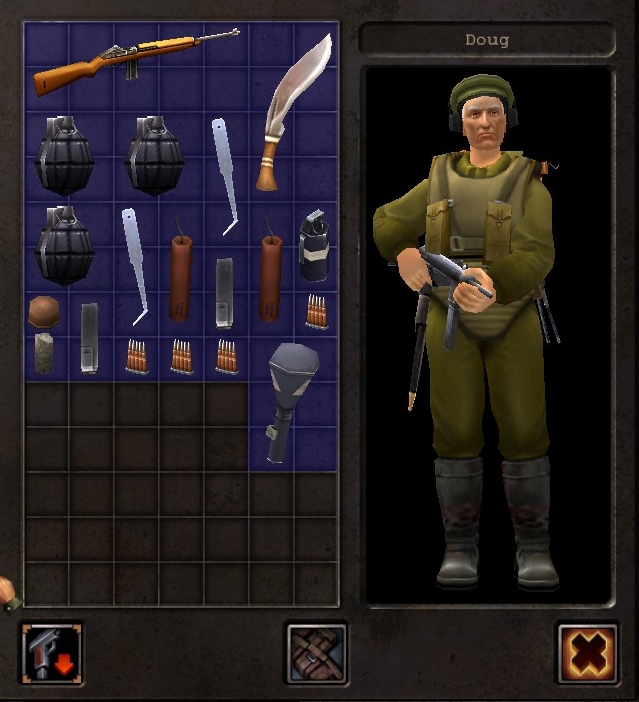 Doug’s experience level (‘1’) and skill screen suggest he’s a greenhorn. His bio, however, tells a different story. It turns out my middle-aged engineer is one of WWI’s 627 Victoria Cross recipients. 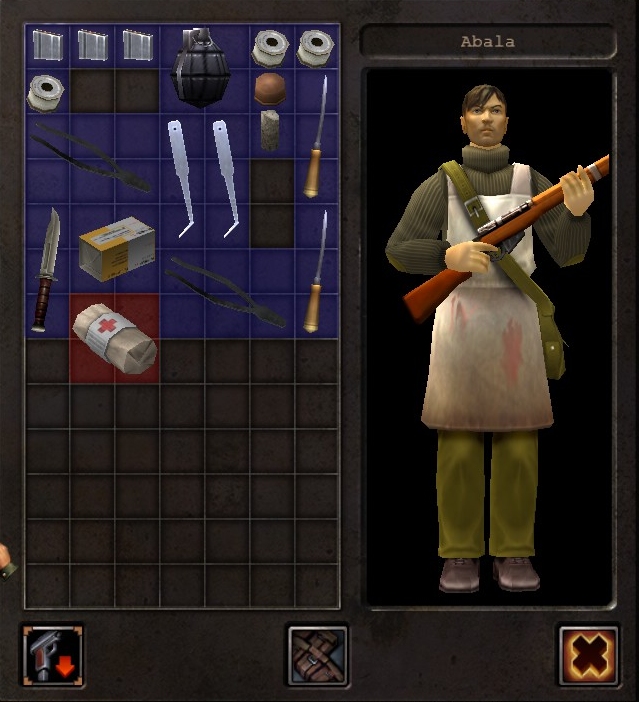 Lastly, there’s Abala, a medic from Bangalore who, sensibly, prefers to rely on a Lee-Enfield rifle for protection than the Geneva Convention. 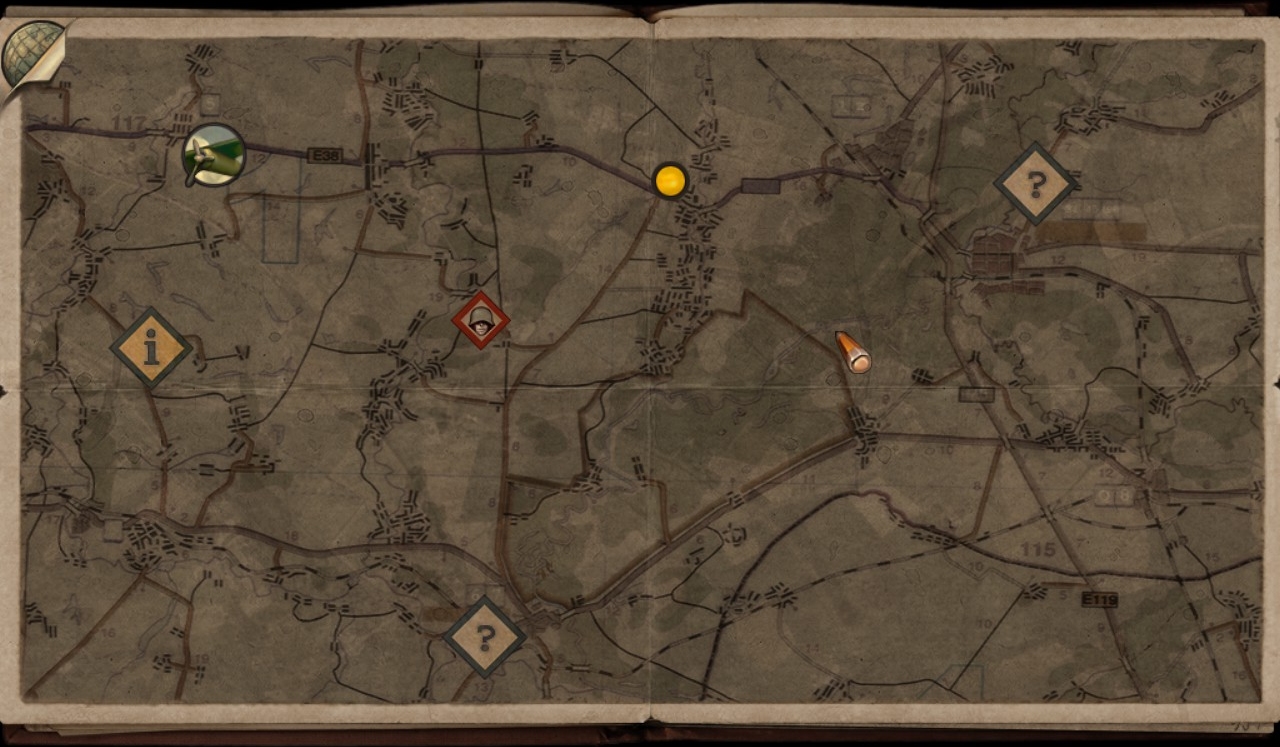 There’s a random encounter available on the campaign map, but I opt for a hand-made story scenario. For reasons not shared in the briefing, Nick and his companions are ordered to hotlorry it to an Army laboratory deep in the English countryside to meet with Dr Compton, a mysterious JC Denton lookalike. 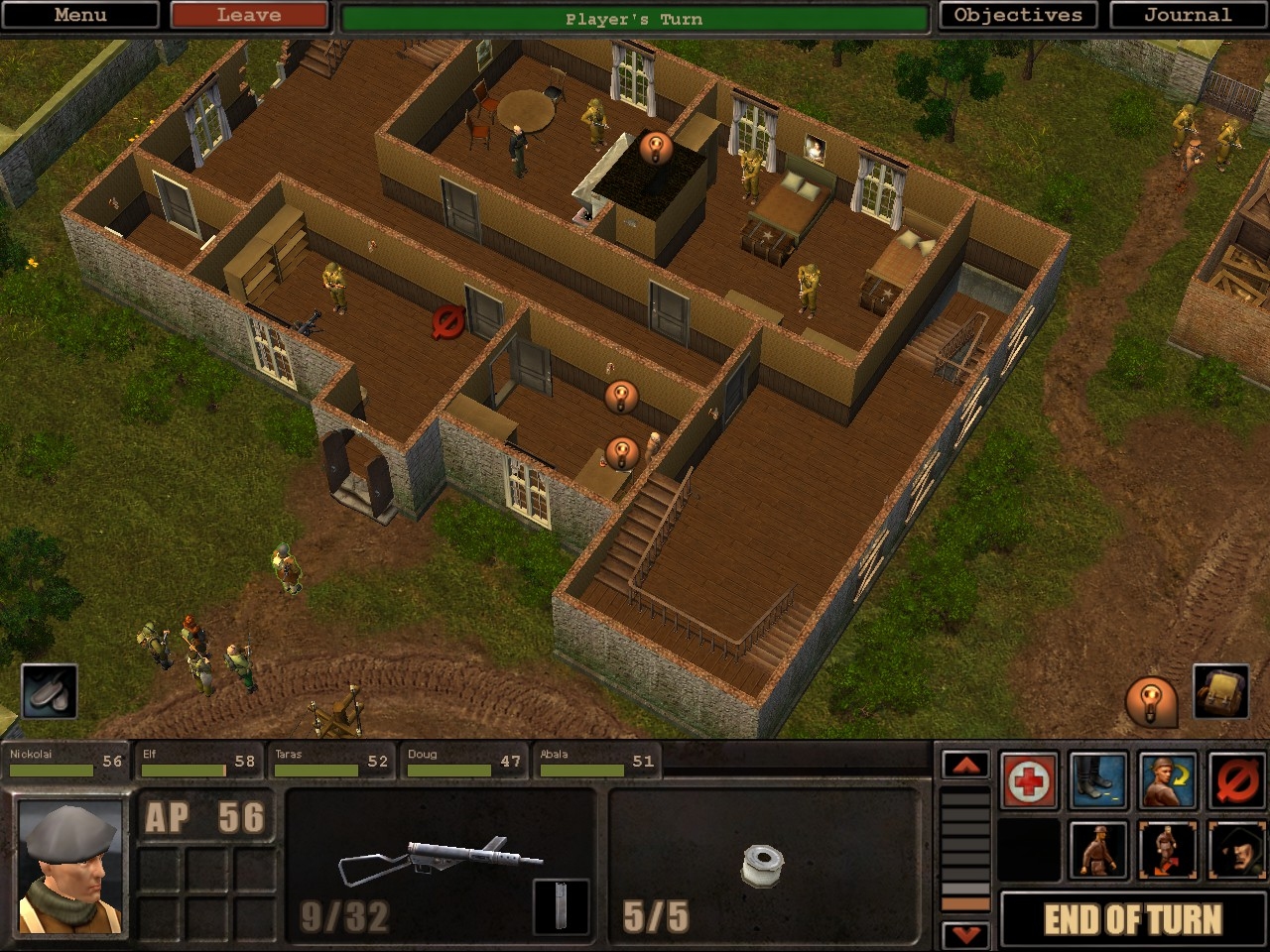 They’ve barely entered the grounds of the manor house that houses the lab when grenade blasts at the western and eastern end of the main three-storey structure bring turnless movement to an abrupt halt. The place is under attack! From here-on proceedings will be IGOUGO. Every step, shot, reload and posture change costs characters Action Points – Action Points that only replenish at the end of the turn. 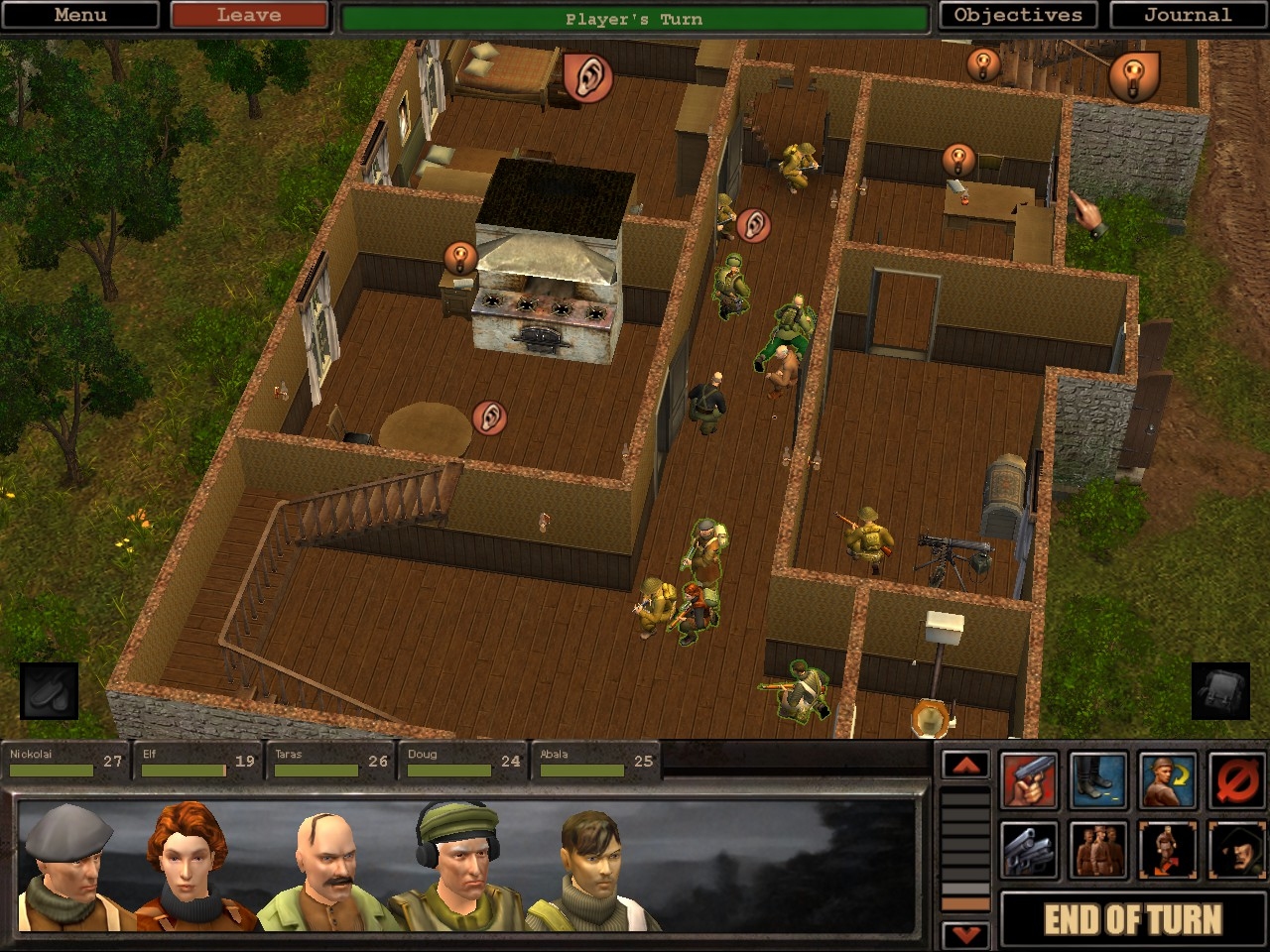 I hatch a rudimentary plan. There are staircases at both ends of the building. Taras and Doug will head east and attempt to reach Compton in the basement before the intruders get to him. Nick, Elf, and Abala will use the western flight to investigate the two upper floors, at least one of which, judging by the scatter of red silhouettes and ear-emblazoned sound contact icons, is already swarming with hostiles. 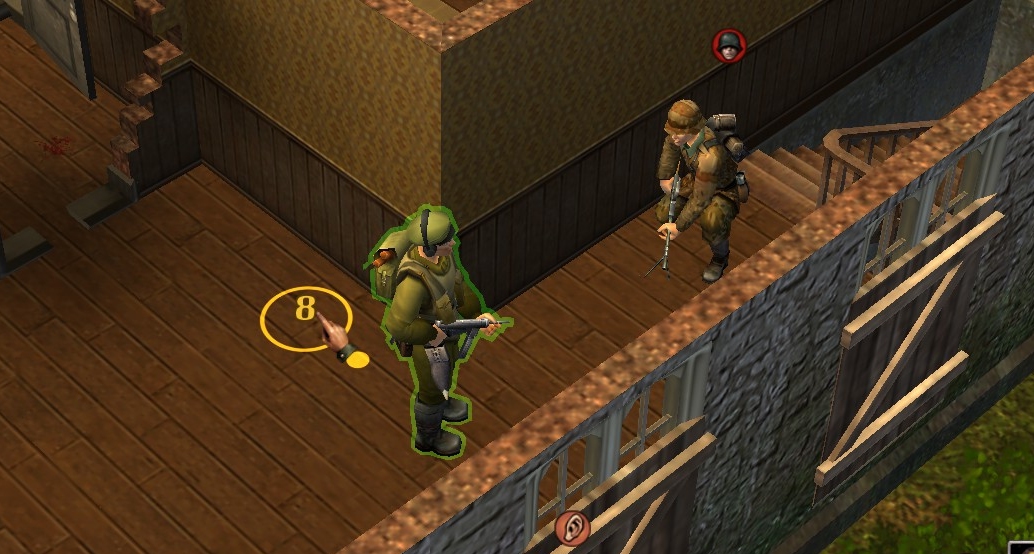 As he rounds a corner near the top of the cellar stairs, grease gun in hand, over-eager Doug almost collides with a crouching foe. Thankfully the foe appears to have insufficient AP left to mount an ‘interrupt’ attack. With 18 AP still in the bank, my engineer could squeeze his trigger, but if the burst wounds rather than slays, he’ll almost certainly cop a packet during the German phase. Better to retreat and hope the hostile follows. If he does, there’s a good chance Taras will drop him before he can do serious damage. 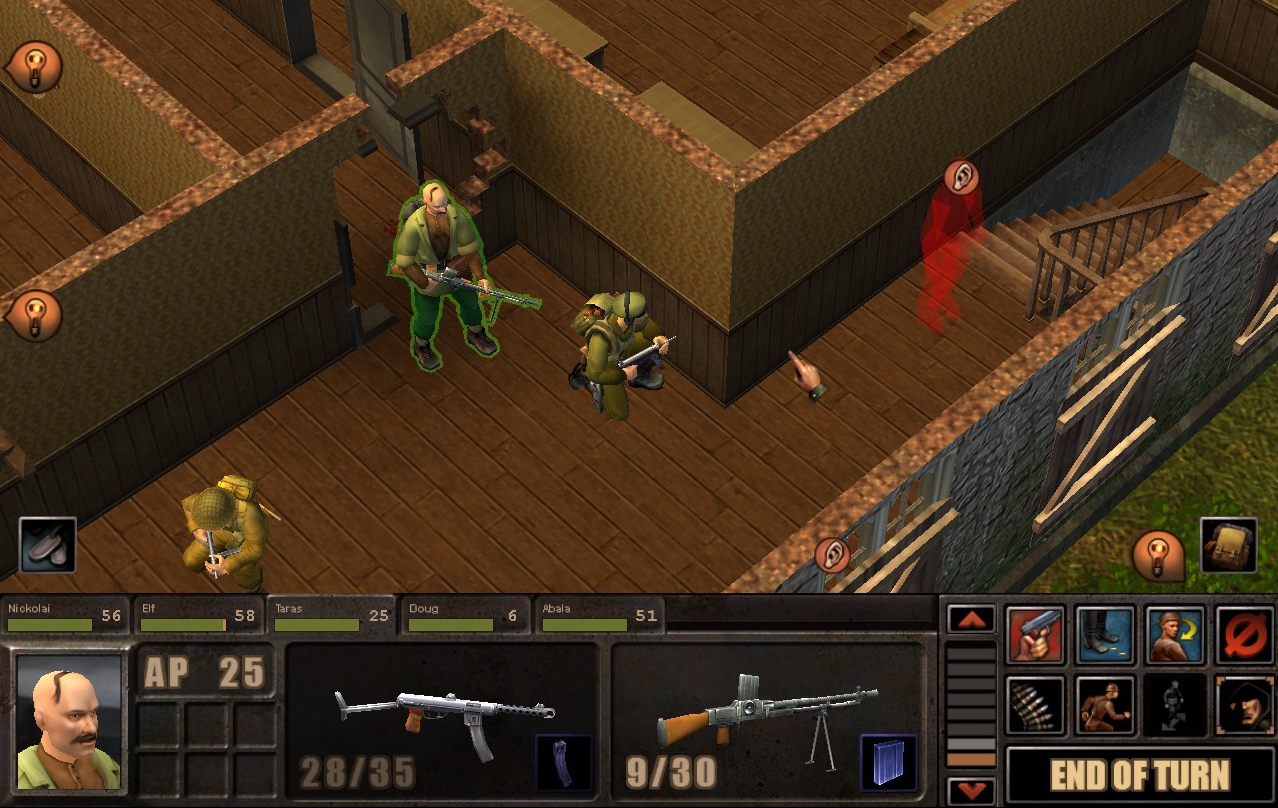 During the Allied phase of the turn, a nearby AI-controlled friendly joins the ambush. Is the newcomer’s choice of position a mite risky?

Gad, yes! Moments after the phase progress bar changes from blue (allied) to red (enemy) the canny German advances a step, levels his LMG at the exposed Tommy, and lets rips. The lead storm doesn’t just cause the mission’s first fatality, it tears a hole in the floorboards under his feet. Ladies and Gentlemen, I give you Silent Storm’s utterly splendid destructible scenery. 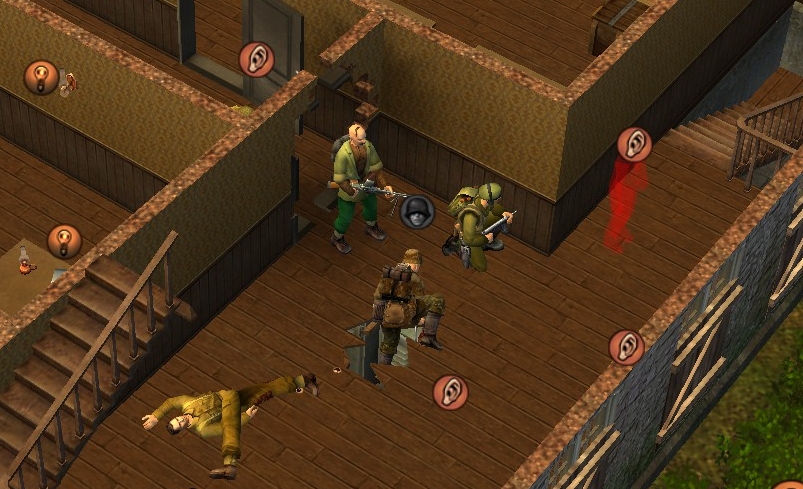 And the game’s AI can be highly entertaining too. The splinters have barely stopped dancing when a coal scuttle helmet appears in the accidental aperture. A resourceful/reckless enemy has decided to quit the cellar without using the stairs!

Perhaps the ascender should have peeked through the portal before utilising it. In the opening seconds of the next turn, firing point blank, Taras fatally holes him. 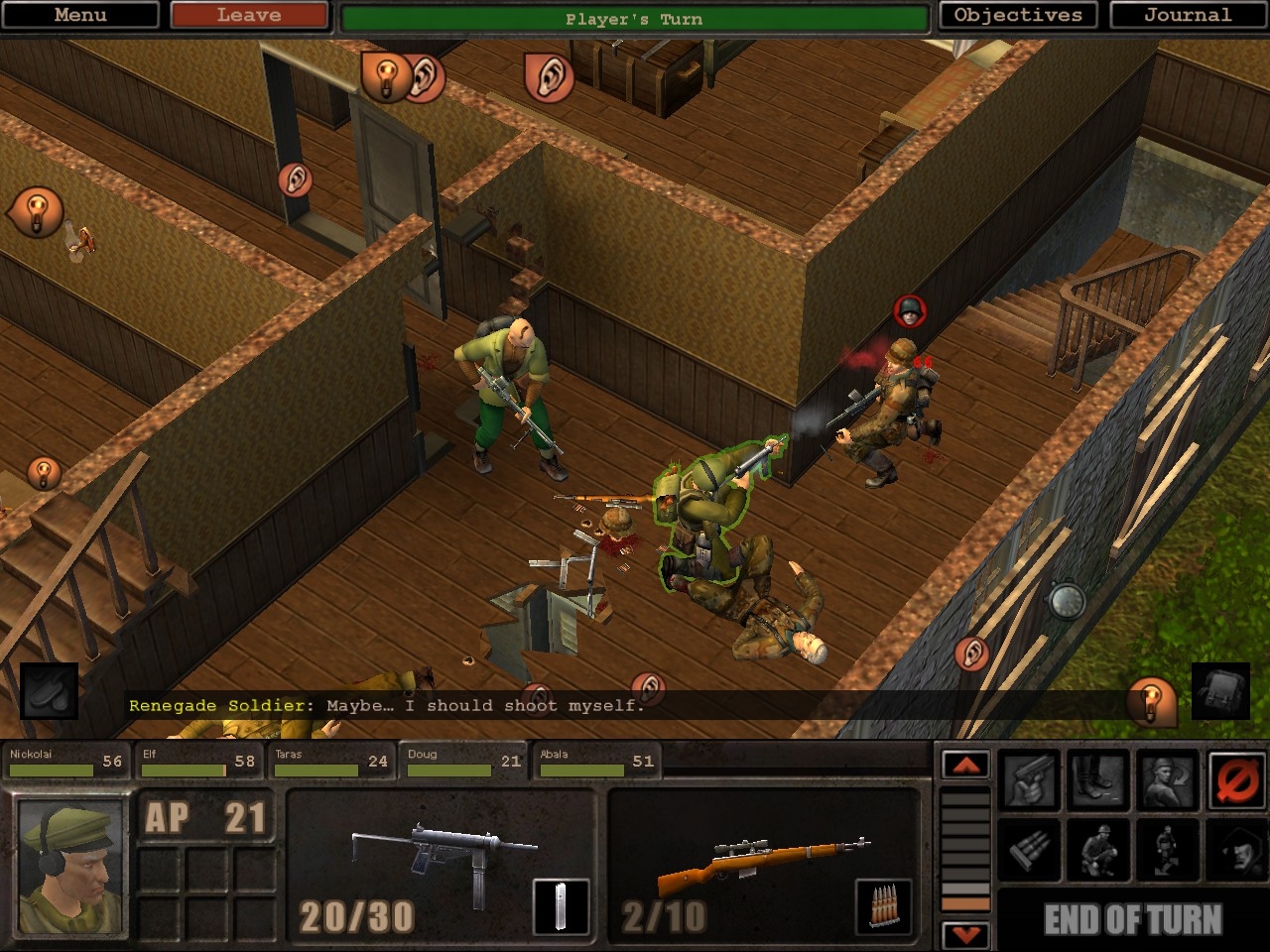 Somehow Taras and Doug get through the next ‘red’ phase unscathed. The appearance of another Tommy helps distract the machinegunner, and the second Jerry to take advantage of the jagged floor flaw, perhaps realising he’s made a dreadful mistake, discards his rifle and ammo after finishing his climb. If it’s mercy he’s angling for, he dies disappointed. My pair’s automatic weapons chatter frantically. A flurry of bullets shoves one lifeless enemy backwards into a window, and leaves the other scrutinising the floor. 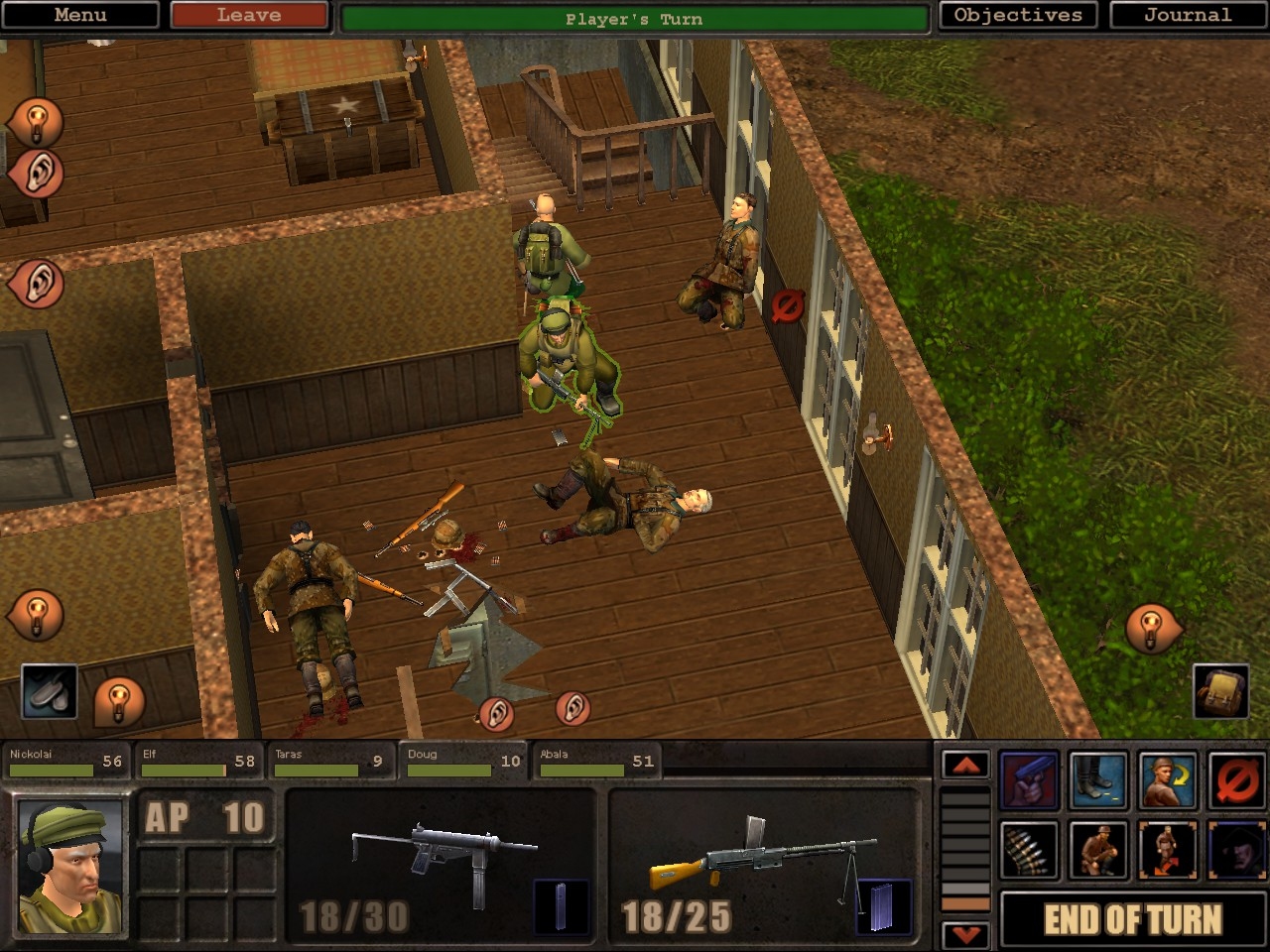 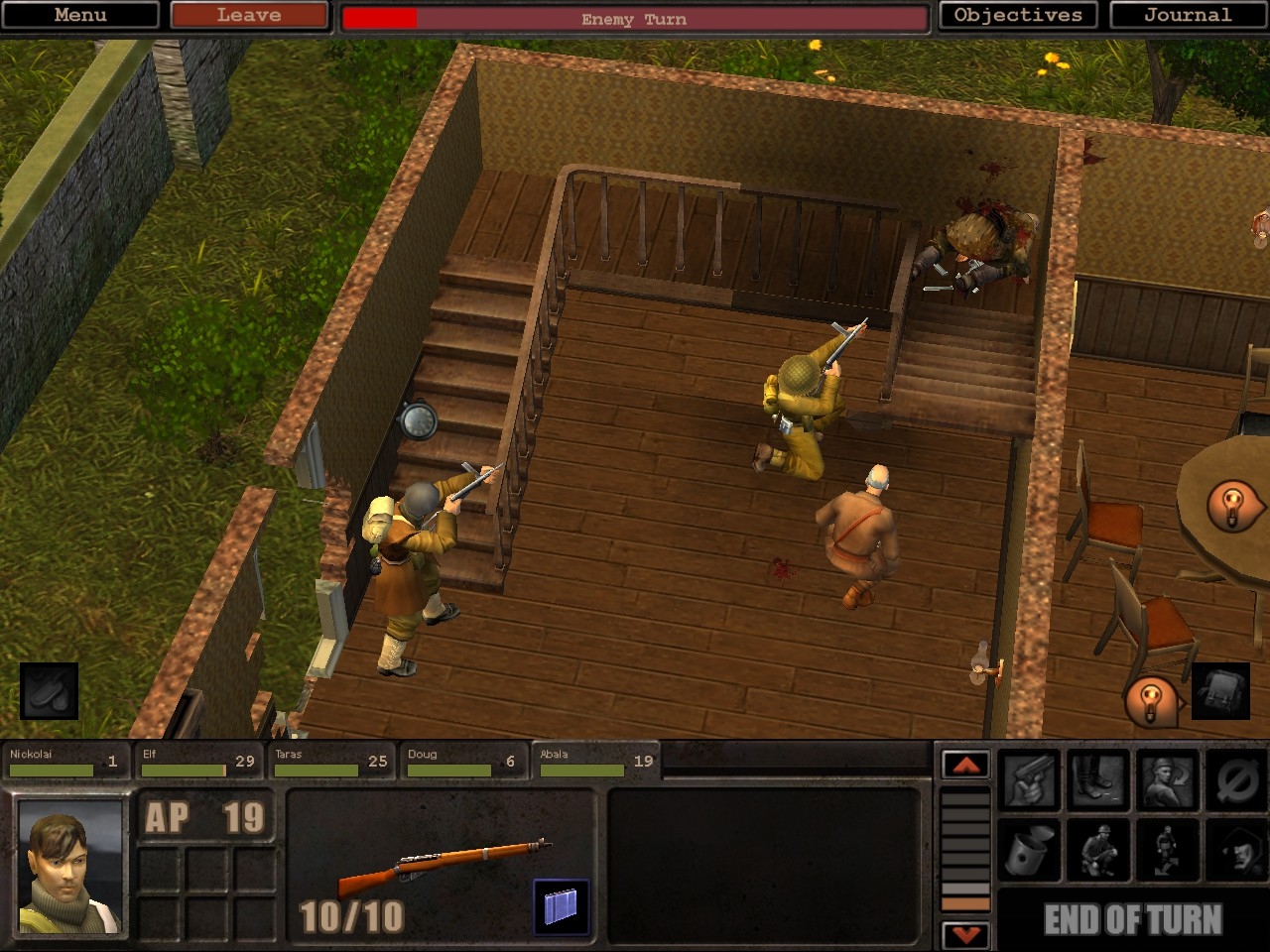 While T&D have been frantically whacking Nazi moles in the east, at the western end of the house my other operatives have also been busy. A grenade blast followed by Sten stitchcraft clears the way to the first floor for Nick and Elf (I leave Abala downstairs covering a gaping hole in the west wall). 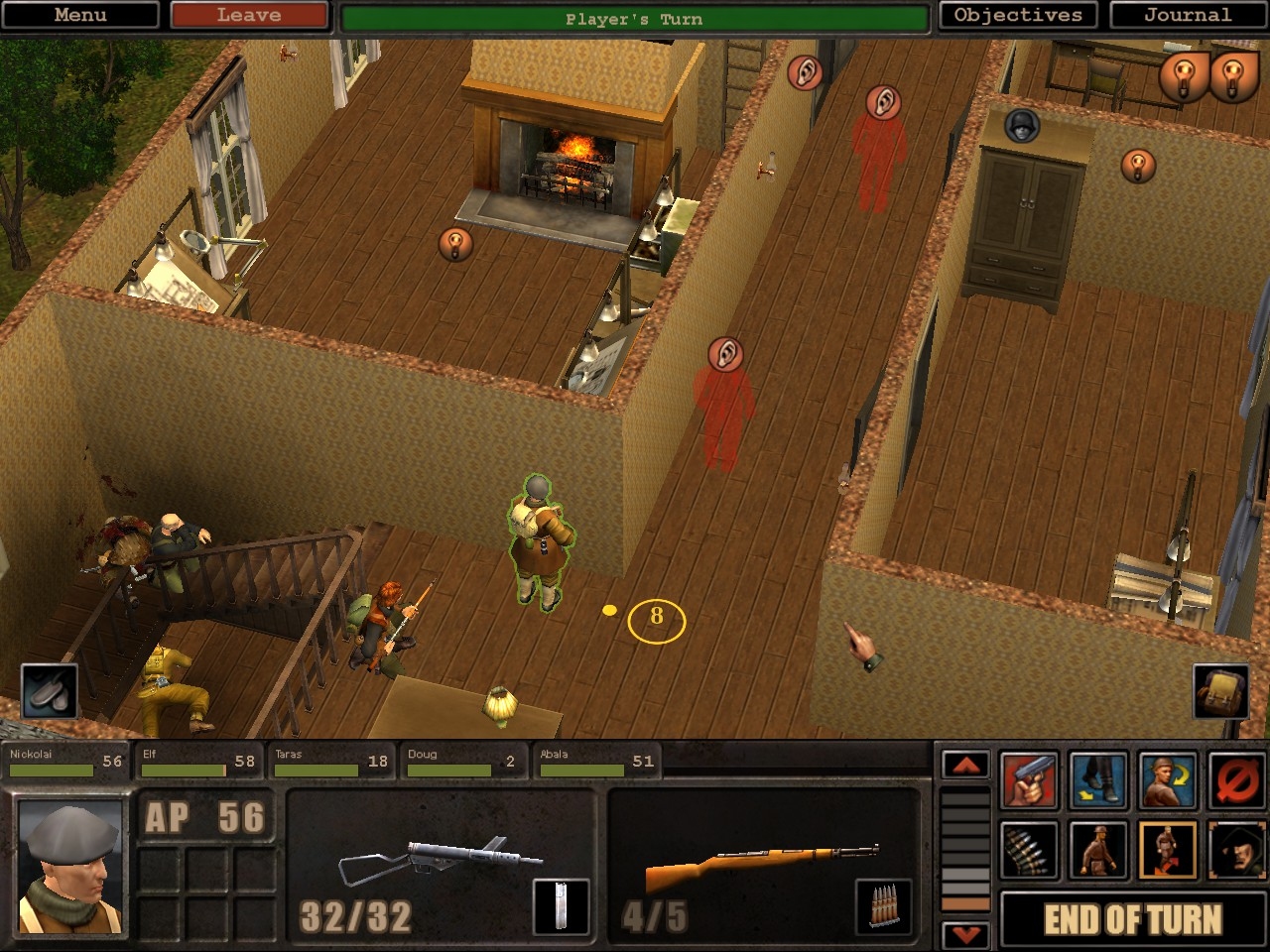 Because Nick’s chastening demise (Note to self. Sidestepping into a corridor overwatched by two AP-rich foes is rarely wise) triggers instant mission failure, my only option now is an ignominious one. F8. Quickload. 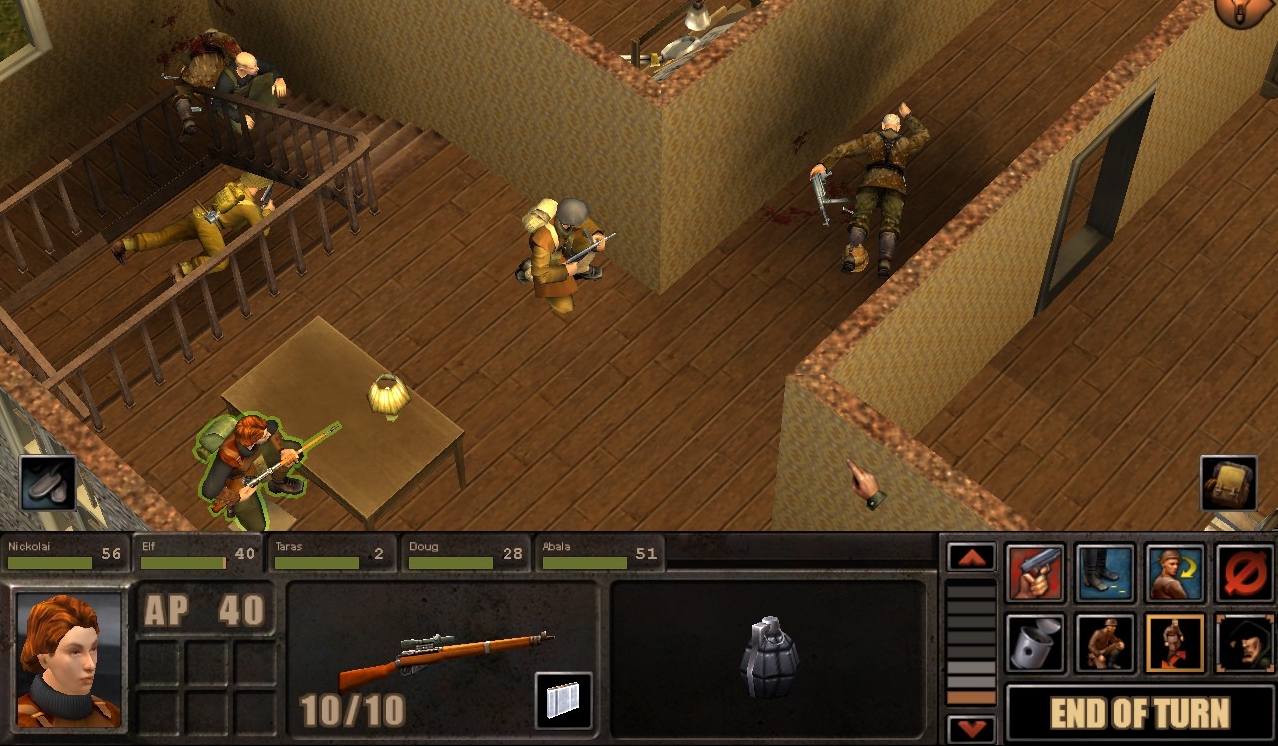 Bouncing grenades into out-of-LoS spots isn’t all that easy in Silent Storm, but, after careful cursoring, my resurrected leader manages to hurl a can of compressed chaos far enough down the passage to spatter the floorboards with crimson. As sharp-eyed Elf edges into a position where she can inspect the damage and clock the other contact, first a dislodged helmet comes into a view then the helmet’s deceased owner. 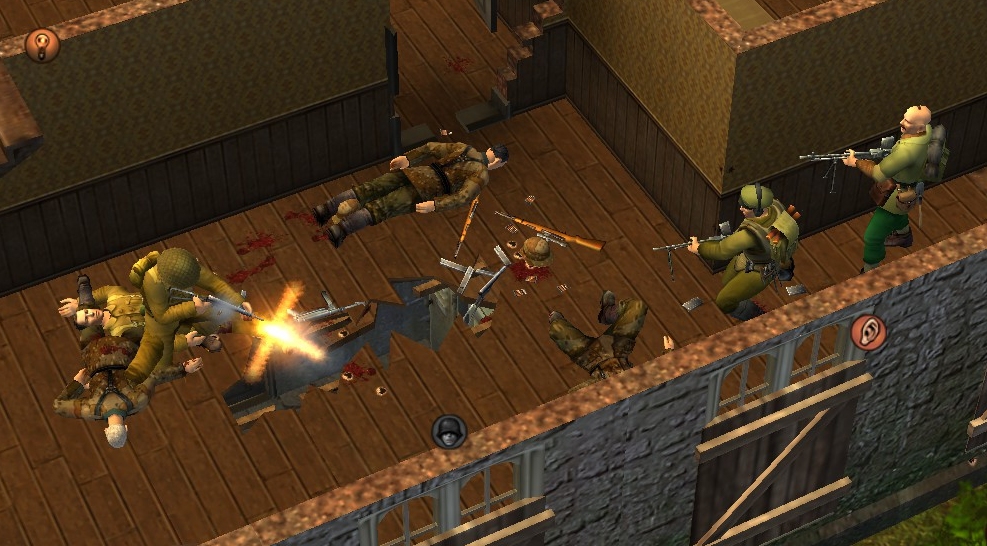 The other corridor contact is nowhere to be seen. Spooked by the blast, has he retreated eastward? Yes, it seems so. He has to be the geezer who has just appeared on the eastern stairs and is currently peering down at the pandemonium created by Taras, Doug, and their AI ally (since we left them, the ally has won an inter-storey firefight, and Doug has used his new toy to clobber another climber, inadvertently enlarging the floor rent in the process).

The retreater doesn’t peer for long. Slugs from his Kar98k tear into the back of the British NPC below, before Doug gets a chance to angle his LMG upwards and claim another scalp. 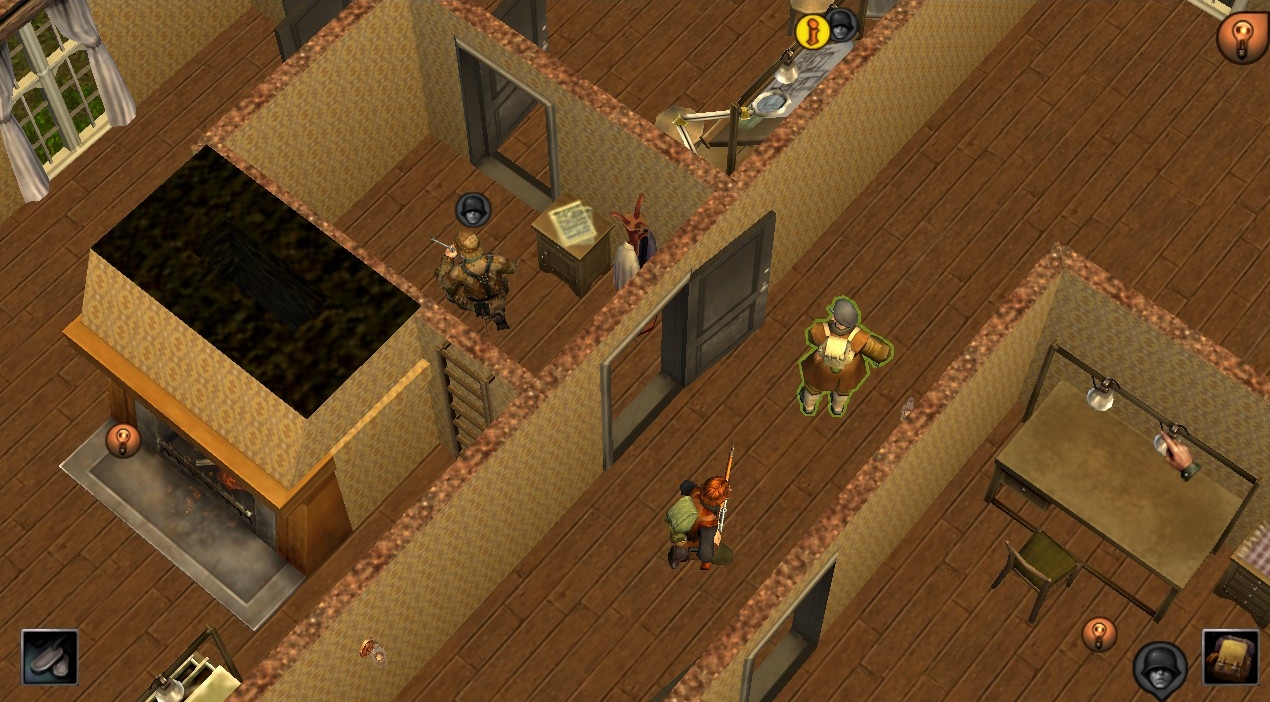 A sneaking suspicion that the first floor is now foe-free (all the sound contact icons have vanished) combined with a sense of urgency engendered by developments outside (AI friendlies have just spotted half a dozen foes making for the manor’s main gate!) prompts some waypointing that is, with the benefit of hindsight, a tad careless. Nick races for the eastern landing closely followed by Elf. Neither notice the hostile crouching in the small room adjoining the corridor until it’s too late.

Nick has enough APs left to step out of the enemy’s LoS/LoF. Elf on the other hand… 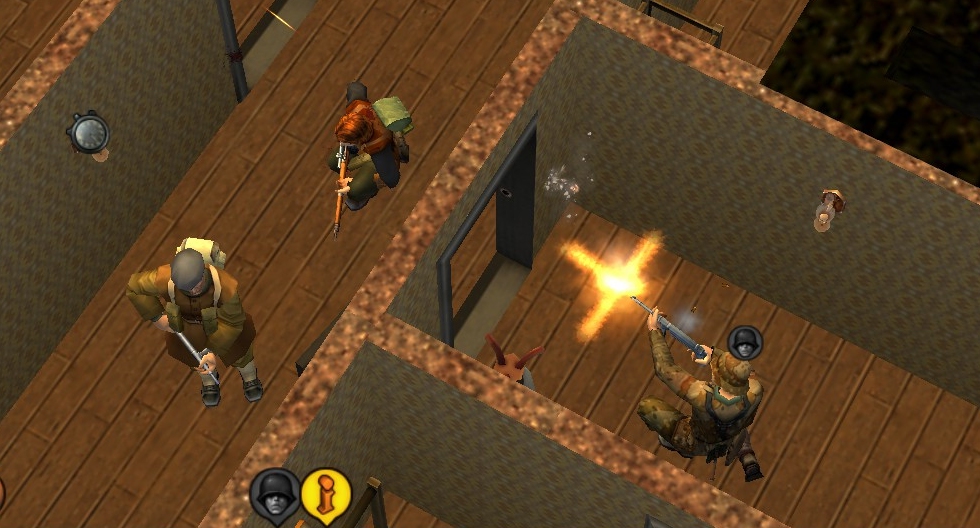 In a furious cordite-scented instant my scout’s health bar goes from totally green to totally red. Even Abala can’t help her now. 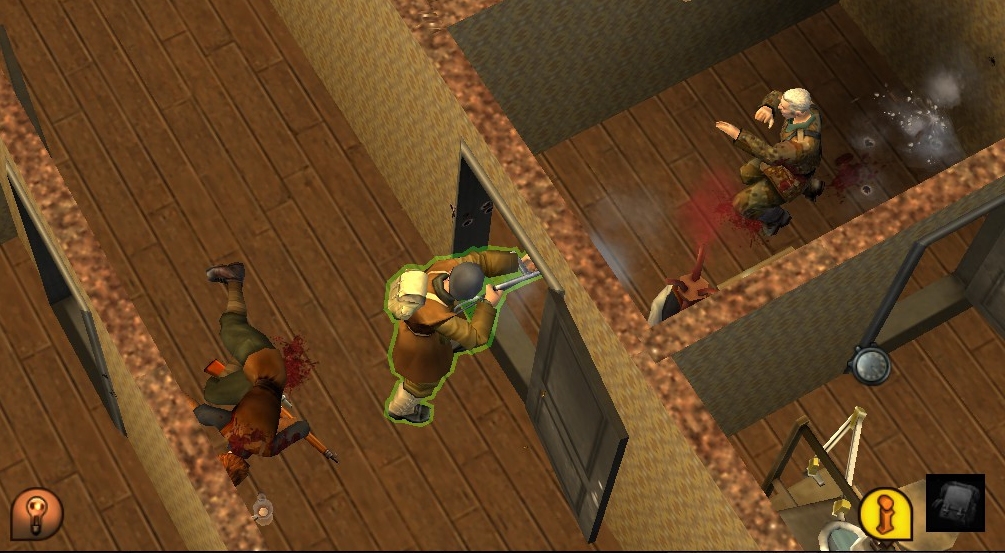 Cursing his stupidity, Nick flings a Mills bomb into the space where the Schmeisser clutcher lurks, waits for the thunder clap, then steps into the doorway and finishes the job with his Sten. 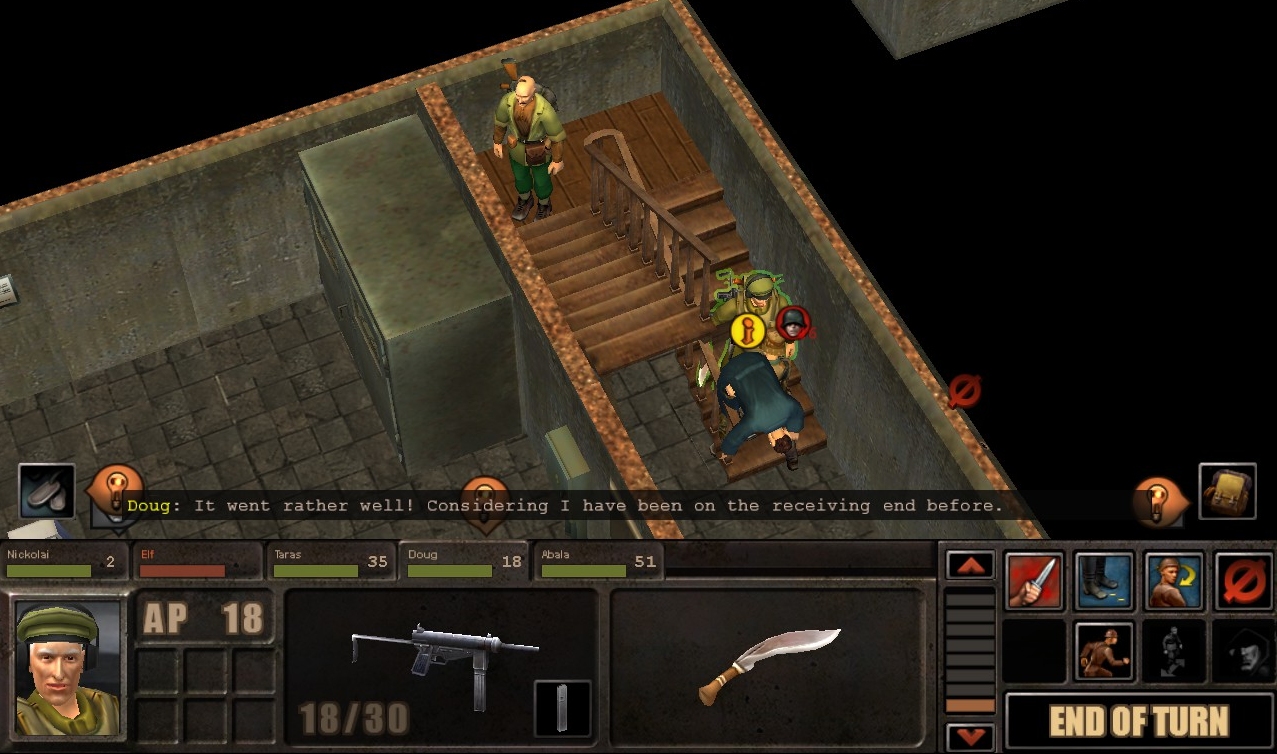 Grenades and bullets aren’t an option for Taras who, descending the cellar stairs, has come face to face with a German carrying the unconscious Doc Compton. When two punches fail to connect, the burly Ukrainian makes way for his kukri-wielding comrade. Why doesn’t the German drop his burden and fight back or flee when Doug starts hacking at him with his Nepalese machete? Search me. Most of the time Silent Storm’s AI performs admirably, but there are moments when it flounders. 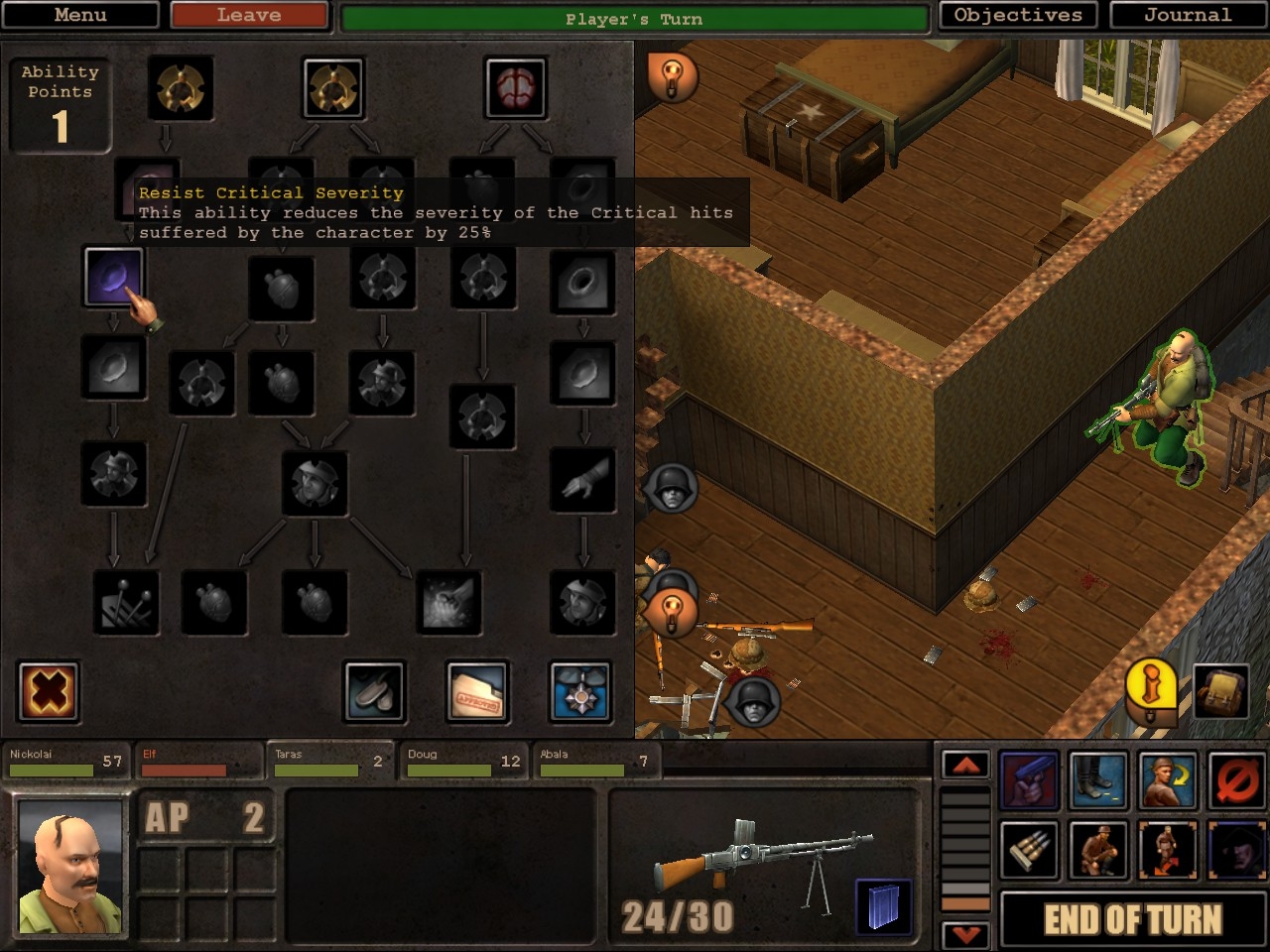 While Doug dispatches the improbably stoical boffin porter, Taras levels up in both an architectural and a ludological sense. I spend the resulting ability point on a resilience buff then send him back down the stairs to collect the unconscious Compton. Doug could carry the doc, but I want him to get to this beauty ASAP. 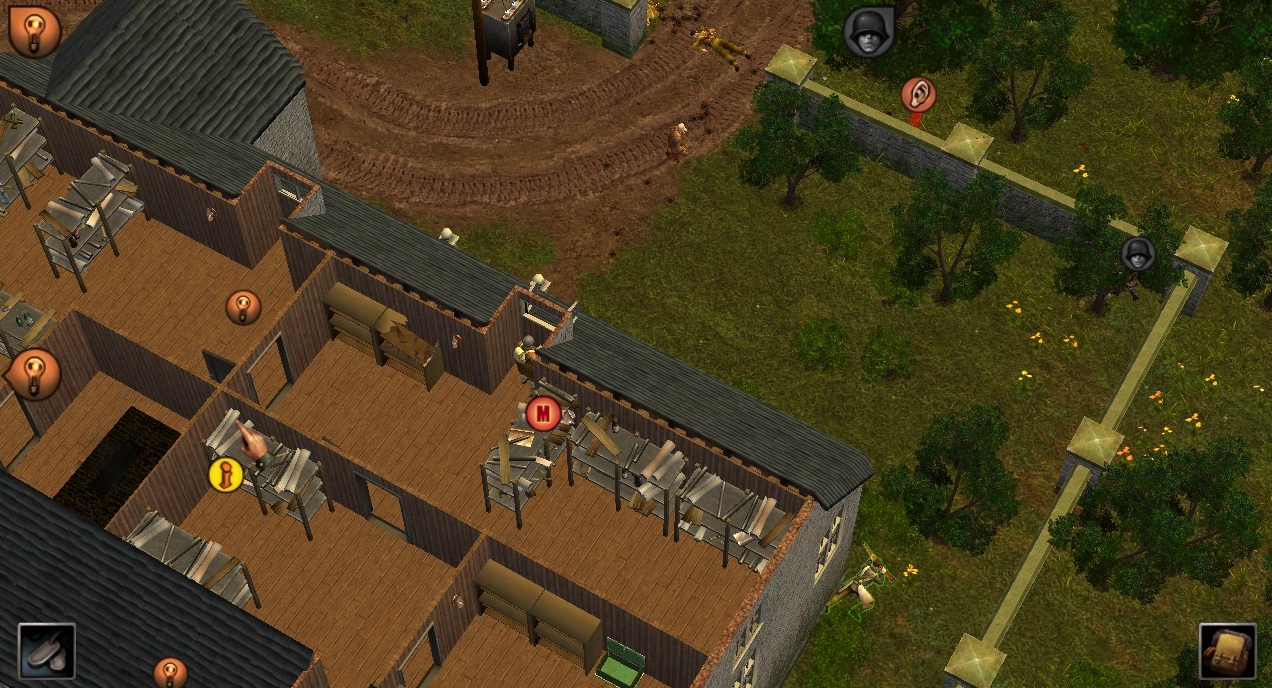 Fast-forward a few minutes. Nick is scouring the seemingly deserted attic for loot and Jerries on his tod. Abala has relocated to a shrubbery at the SW corner of the manor. And Doug and Taras (now unencumbered) watch and wait in rooms flanking the front door as, near the gates, plucky Tommies do their best to thin the ranks of the advancing stormtroopers. 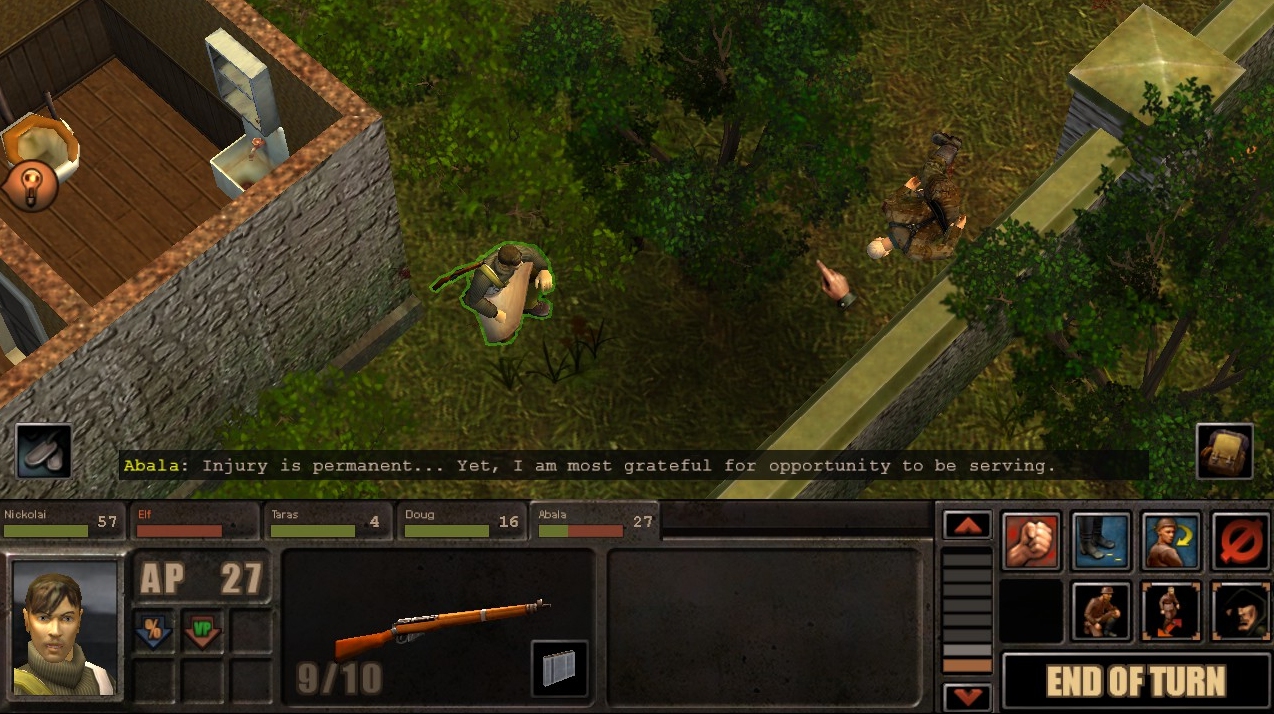 Although most of the approaching foes look to be making for the front door, one sly so-and-so hops over the wall and heads in Abala’s direction. A rifle shot from my concealed medic strikes the flanker but fails to fell him. I instantly regret the follow-up Mills Bomb. Thanks to a meddling tree branch, Abala’s sorry stats, and Silent Storm’s invisible dice, the grenade embeds almost as much shrapnel in the Indian as the German. 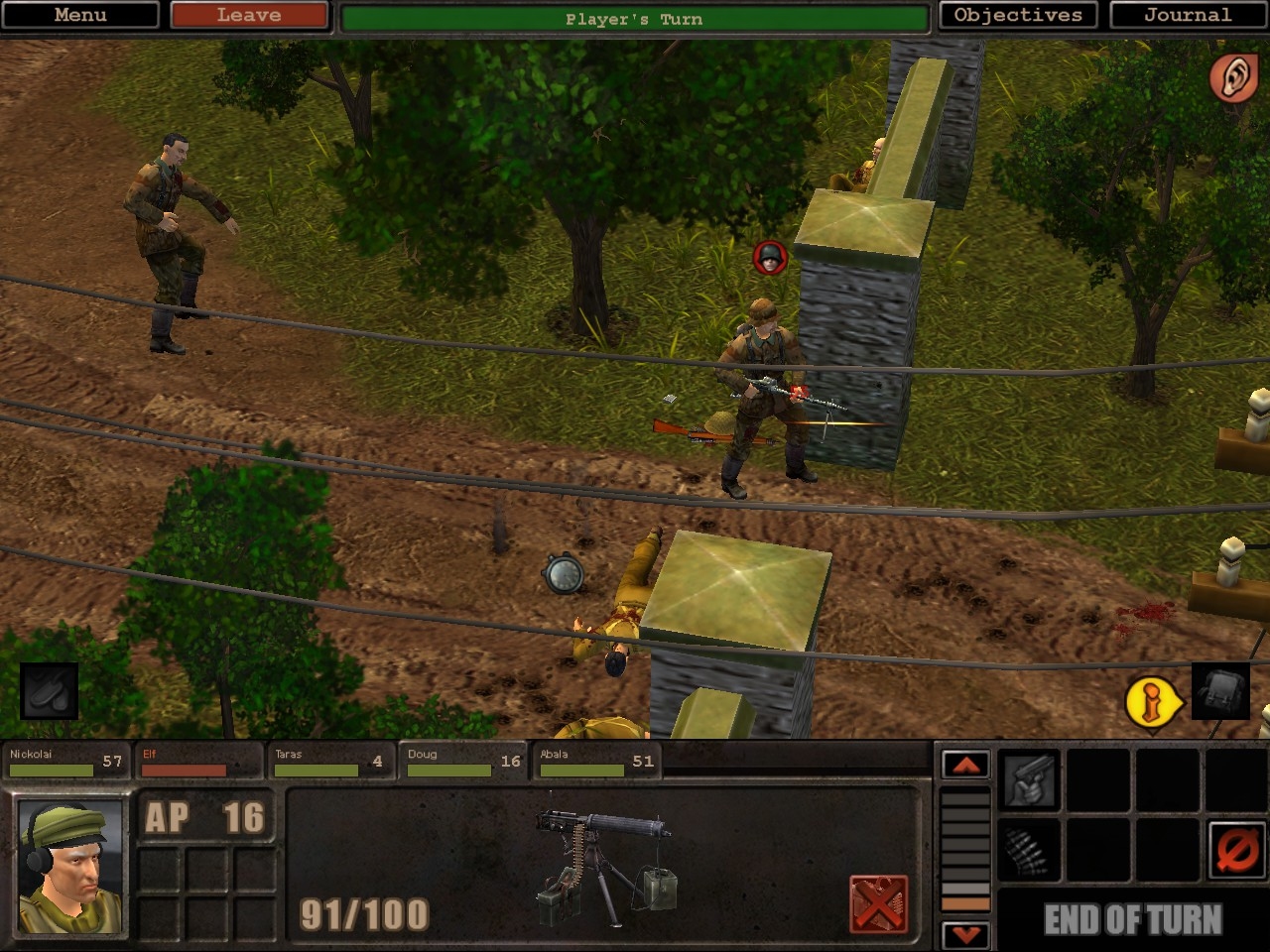 The first two jackboots to dent the manor’s drive do so very briefly. A burst from Doug’s Vickers HMG lifts their owner off his feet then throws him backwards a good ten metres. 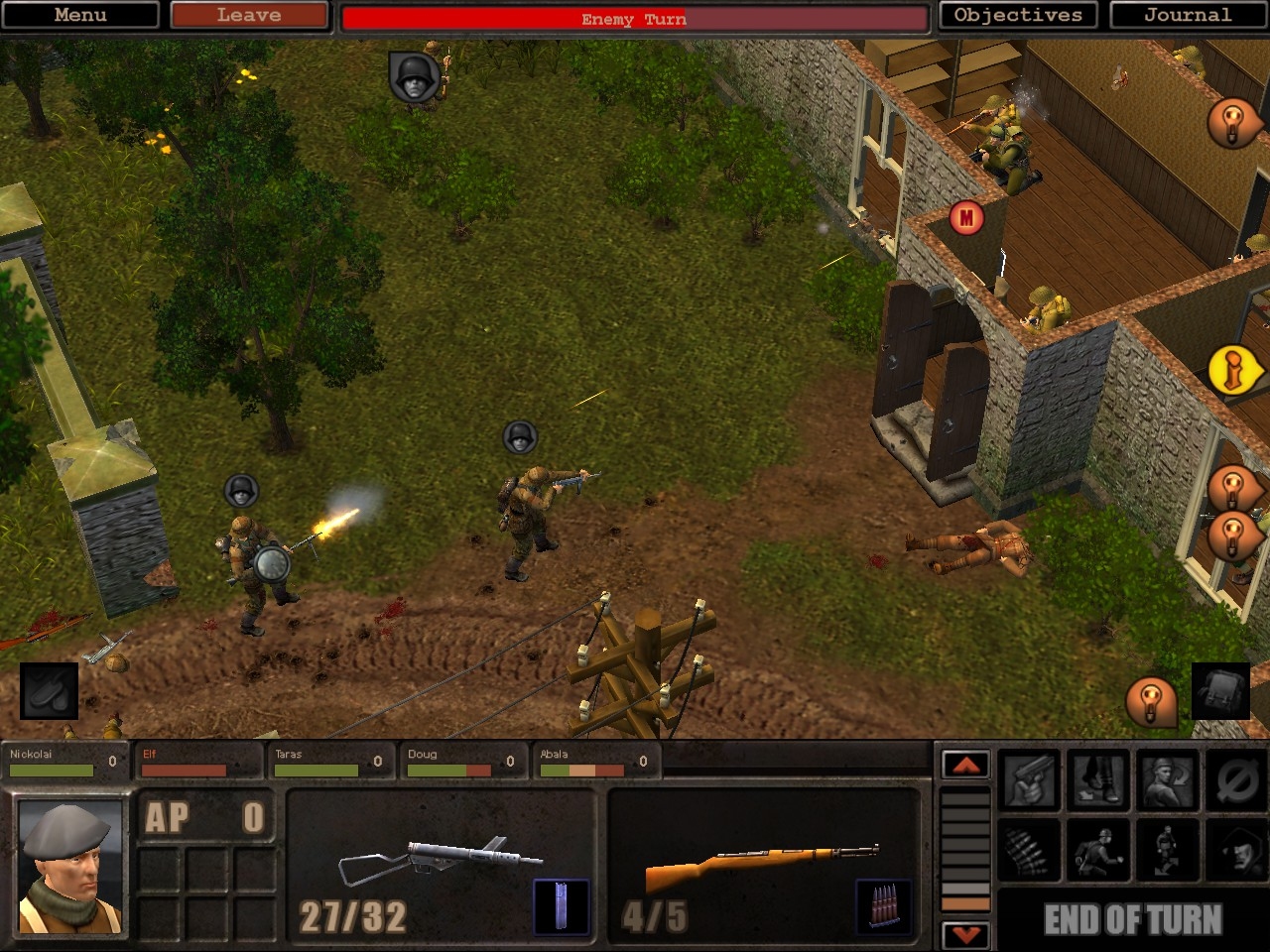 Unperturbed, the dead acrobat’s comrades push on, spraying ground floor windows as they advance. Both my engineer and the rifleman kneeling by his side stop MG 34 rounds before the attack begins to falter.

Wounded warriors who take to their heels during the final few turns of the mission include Abala and the enemy Rambo. The former makes it to safety, the latter is spreadeagled at long-range by ambitious shots from an NPC’s Sten. I wait for an appreciative “Blimey!” or “Good shooting!” from nearby manor defenders, but the amazing marksmanship elicits no reaction. 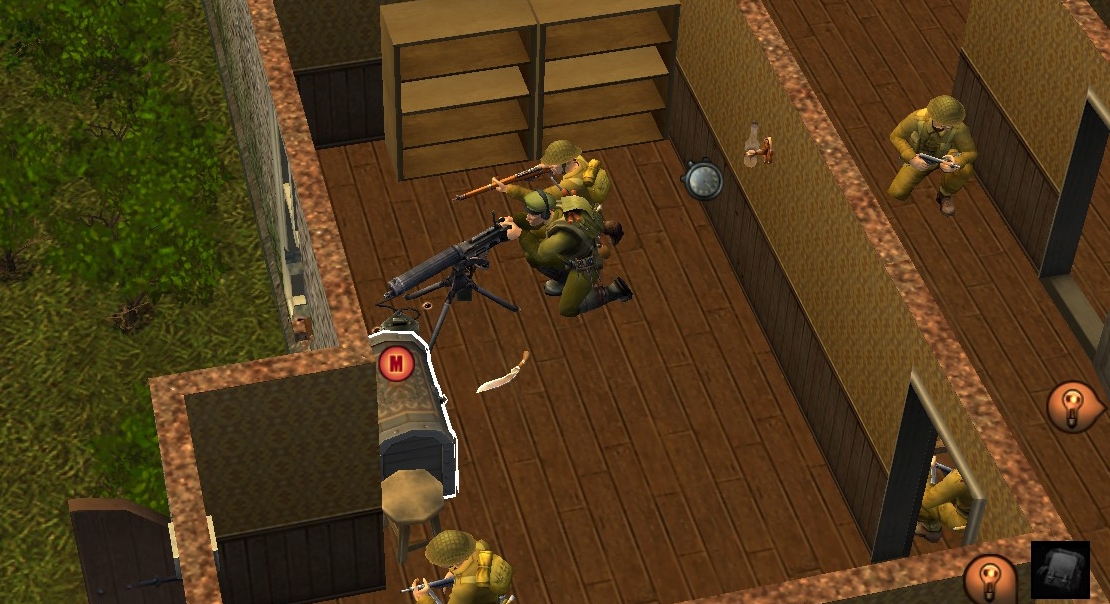 Fin. This reminder that no TBT serves up low-headcount WW2-flavoured skirmishes quite as brilliantly as savage, surprise-stuffed Silent Storm, is over. 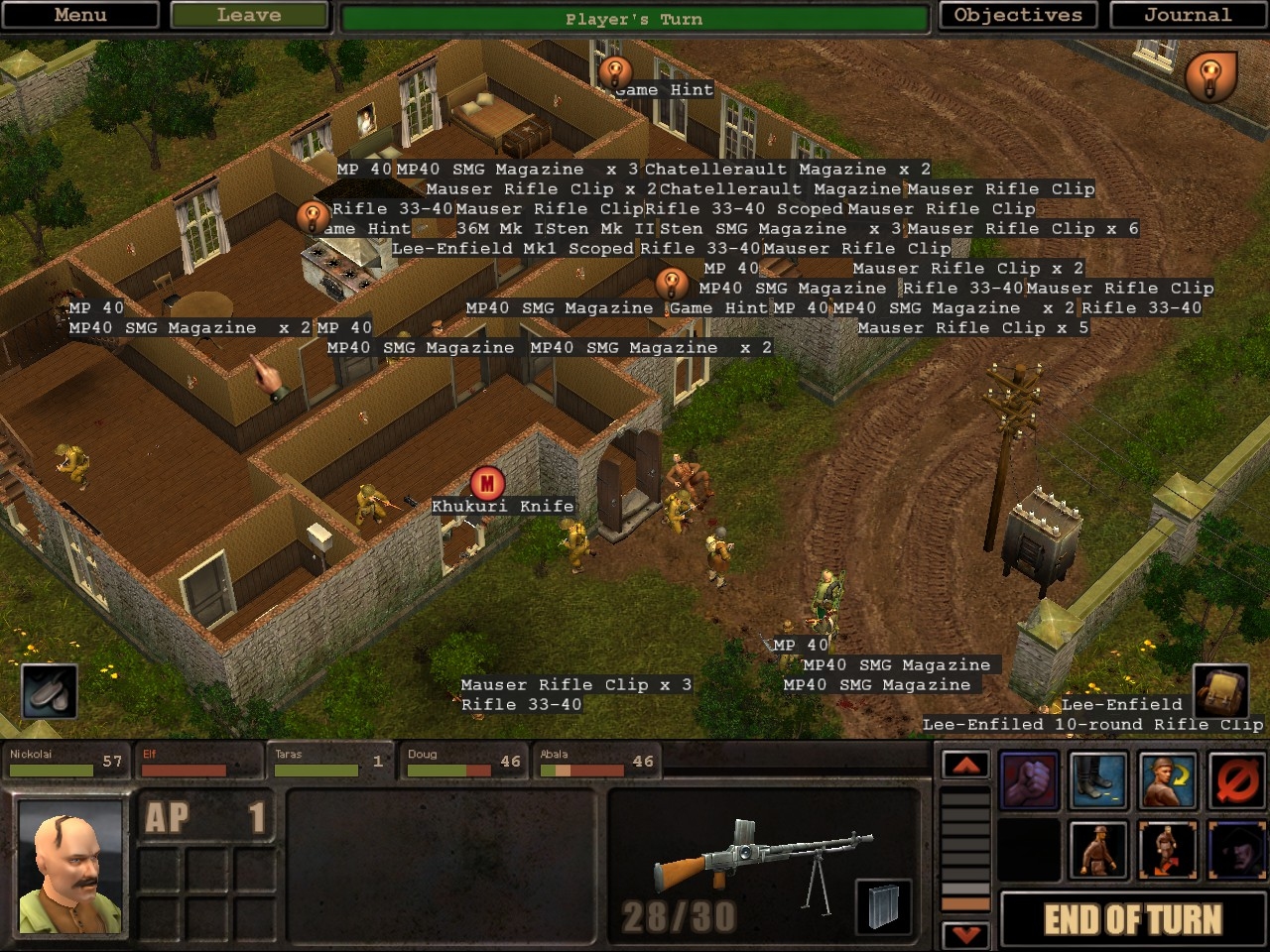 Well, almost over. Before Nick and pals head back to HQ, they will, of course, fill their packs, pouches, and pockets with a choice selection of lethal souvenirs.