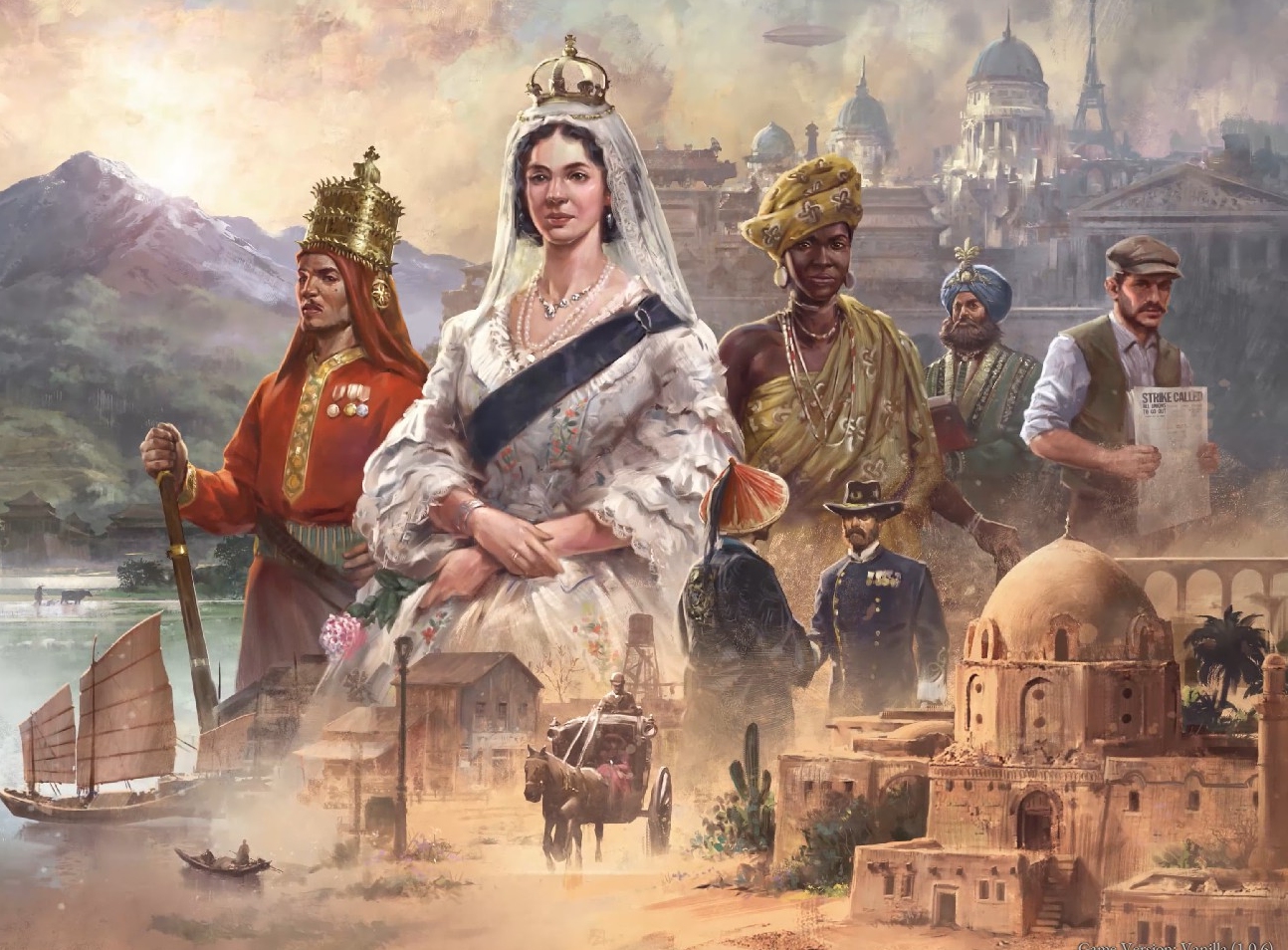 Looking for a fair, thoughtful assessment of one of the highest profile strategy games of 2022? You’re in the wrong place, mate. The following 600 words describes what happens when a time-poor tactical wargamer who hasn’t touched a Paradox game in over a decade, gives Victoria 3 a completely unreasonable ultimatum – “Entertain me within three hours or be uninstalled”.

To make things extra difficult for Vicky, I’m expecting her to amuse/absorb me on a decrepit Windows 7 rig (officially, Windows 10 is required) and I refuse to spend any of my playtest wading through tutorials.

For a moment it looks like Her Majesty will go arse over tit at the first hurdle, but with help from an Indian YouTuber I do eventually find myself contemplating one of the finest main screen images I’ve contemplated in a long while. 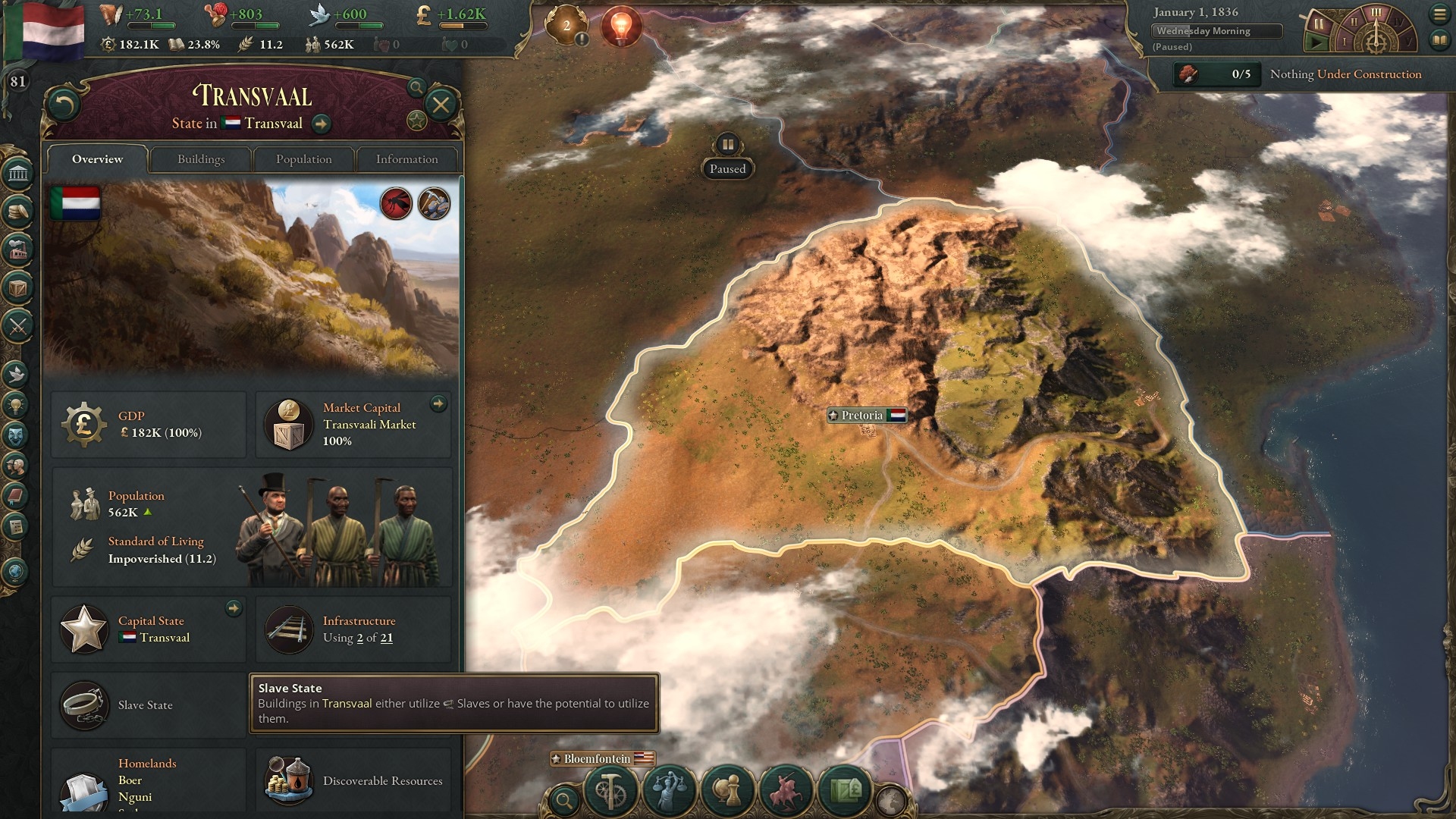 Shunning all instruction, I pick landlocked Transvaal as my first victim. Not unfamiliar with the area’s 19th Century history, and feeling somewhat mischievous, I decide to stress-test the game’s historicism with some radical reform. Slavery must go ASAP! 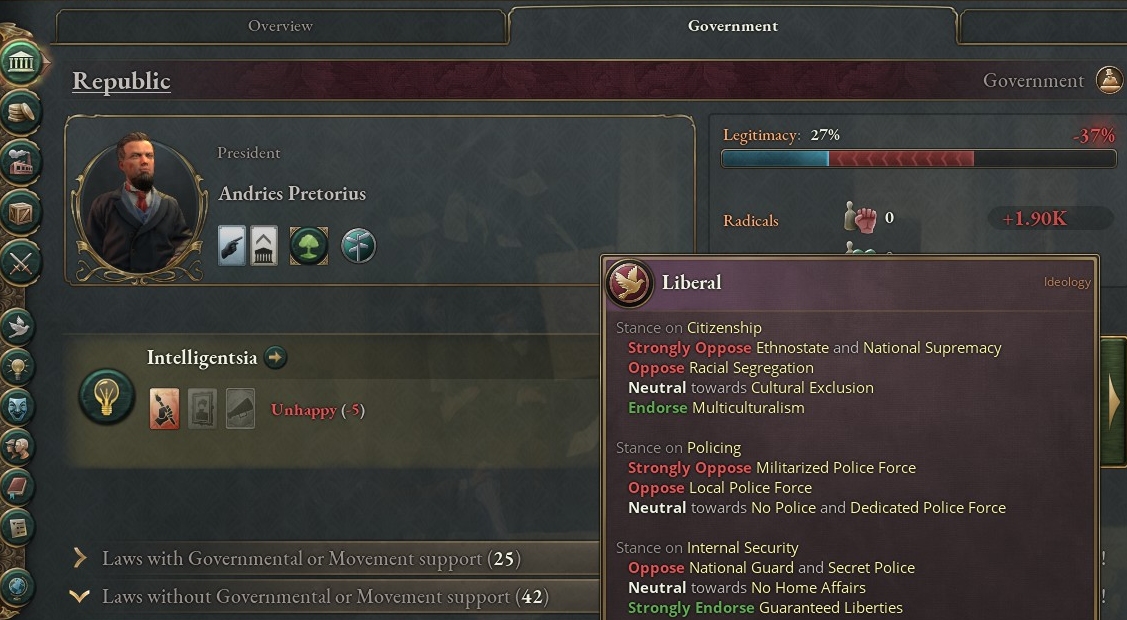 After a few minutes of menu exploration and tooltip reading, I realise that I will need to transform my government in order to achieve my noble goal. The ‘rural folk’ who were calling the shots at the outset (Jan 1, 1836) find themselves unceremoniously replaced by the liberal ‘intelligentsia’. This coup allows me to abolish ‘slavery’ (Vic3 doesn’t explicitly model Inboekstelsel) with a single painless (?) mouse click. 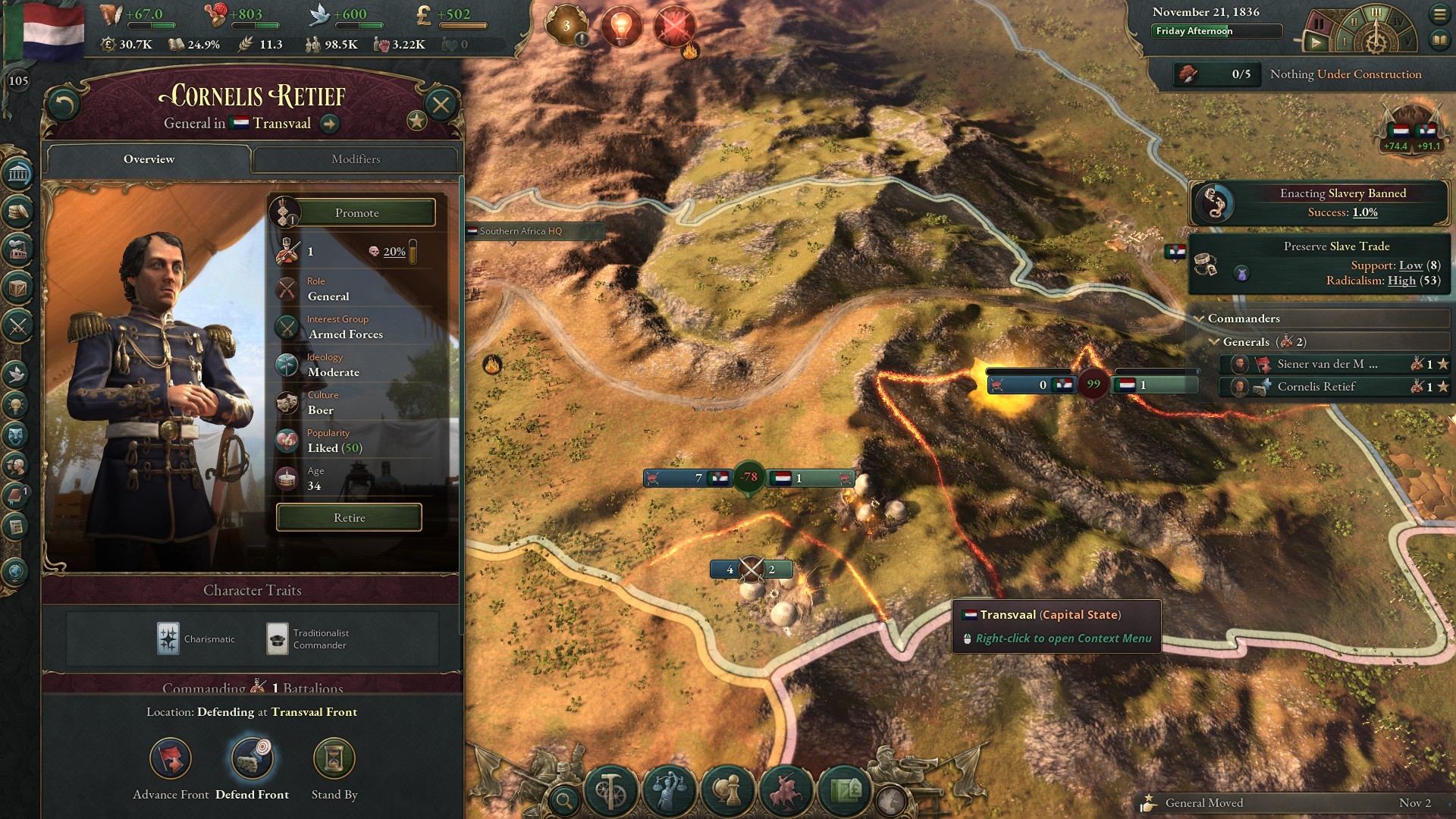 Deep down I’m hoping the game has sufficient sophistication – sufficient respect for history – to punish me for my boldness. The punishment duly arrives. By May, the outraged landowners and rural folk are in open revolt. Civil war breaks out and I scramble to crush the uprising by mobilising armies, recruiting and dispatching generals, and upgrading barracks.

Fat chance! With numbers on their side the ‘Transvaal Aristocratic Revolutionaries’ steadily expand their territory. By mid July it’s all over. My first taste of Vicky 3 ends in ignominious ‘annexation’ – a slightly odd way to describe the outcome of a successful revolution. 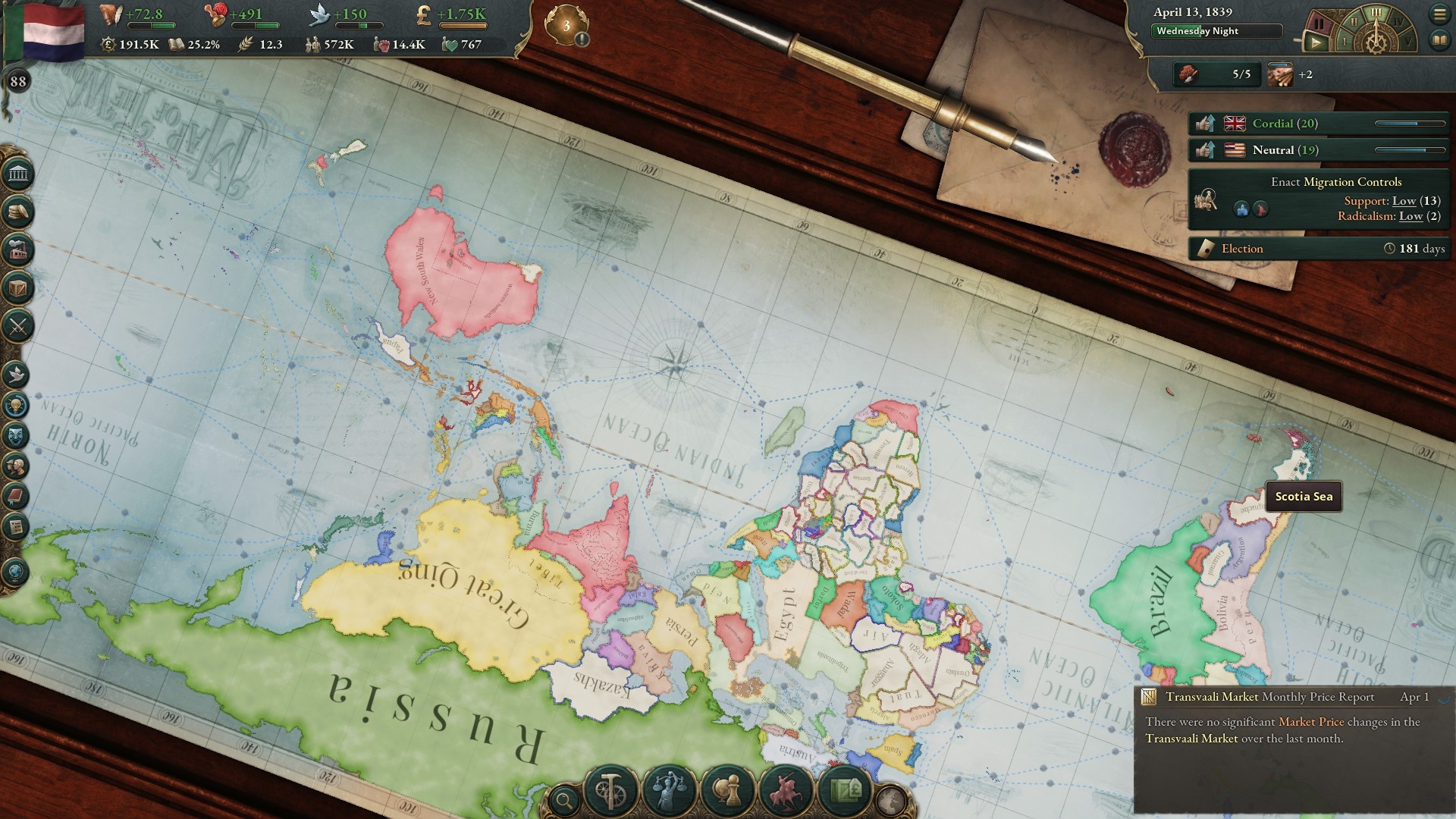 Clearly, if I want to transform 19th Century Transvaal into a beacon of liberal democracy, I will need to be subtler… more patient. Sixty minutes into my playtest, game #2 begins with diplomatic experimentation (Mounting international charm offensives is child’s play), and some unashamedly personal goals. If I can’t safely do away with slavery in the two hours I have left, perhaps I can abolish child labour, turn Zululand (my surprisingly friendly neighbour) into a faithful ally, create a competent professional army, and bring railways to the veld.

With these objectives in mind, I queue buildings, pass laws, and initiate research. Regularly I find paths I’d like to take blocked, but more often than not the reason for the greyed-out button or tickbox is explained in a tooltip. Ah, I need to research X or instigate Y first. The extent to which the game encourages the impetuous newcomer with its logical, well annotated GUI comes as a pleasant surprise, but, of course, there are areas where intuition and experimentation only gets you so far. Trade is particularly intimidating. Despite lots of button pushing and text scrutiny my arms factory never gets the supply of imported hardwoods it needs. 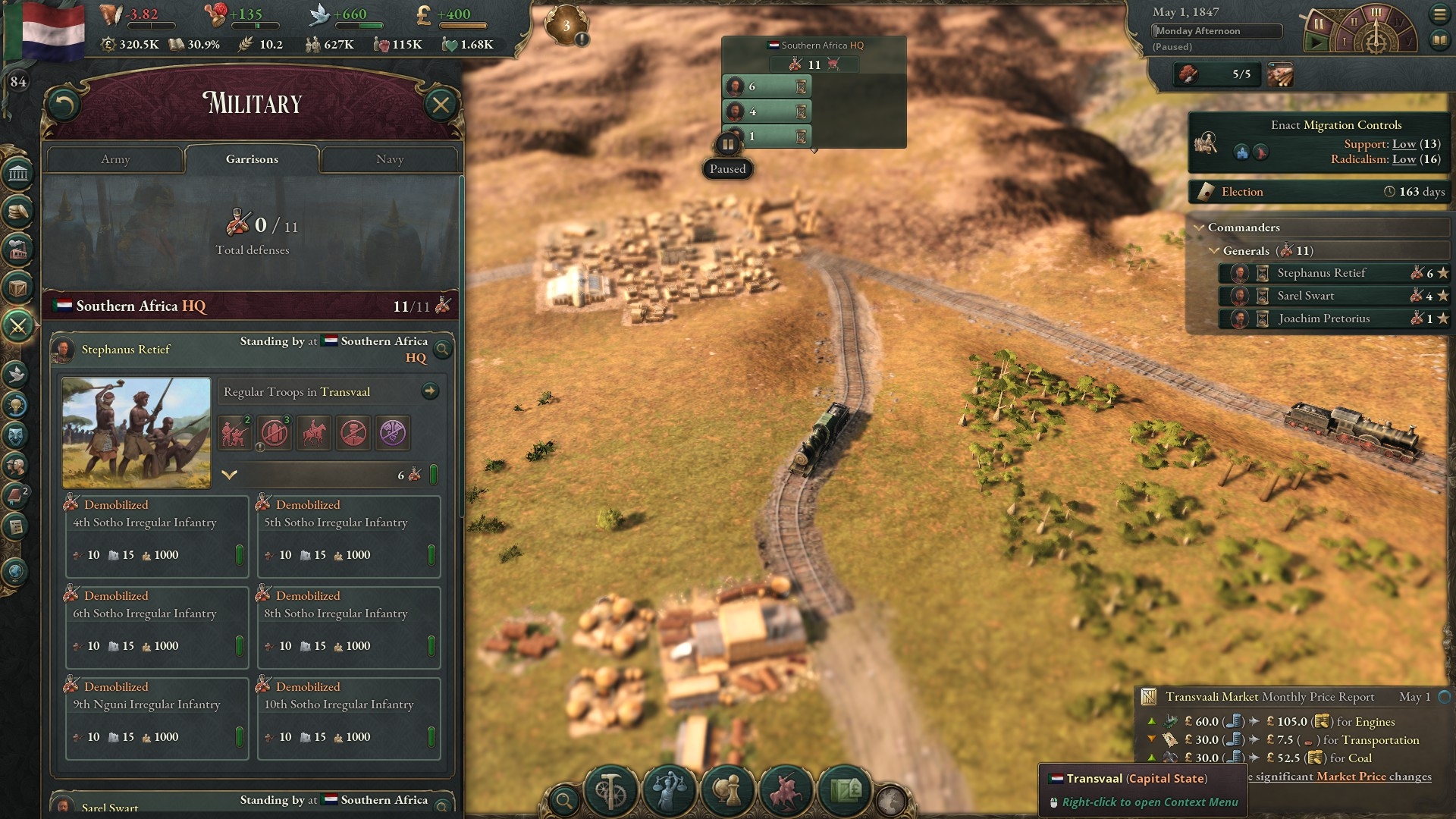 Before I know it my deadline has arrived. The Transvaal I leave in 1847 is relatively prosperous and stable. It has a bijou railway network, a sizeable professional army, and a mysterious cyclical unemployment problem. Does it feel slightly generic? Yes (I waited in vain for some region specific events). Has my time as its guiding hand turned me into a born-again Paradoxophile? No, but I reckon I’ve glimpsed the magic that makes passionate grand strategists passionate grand strategists. 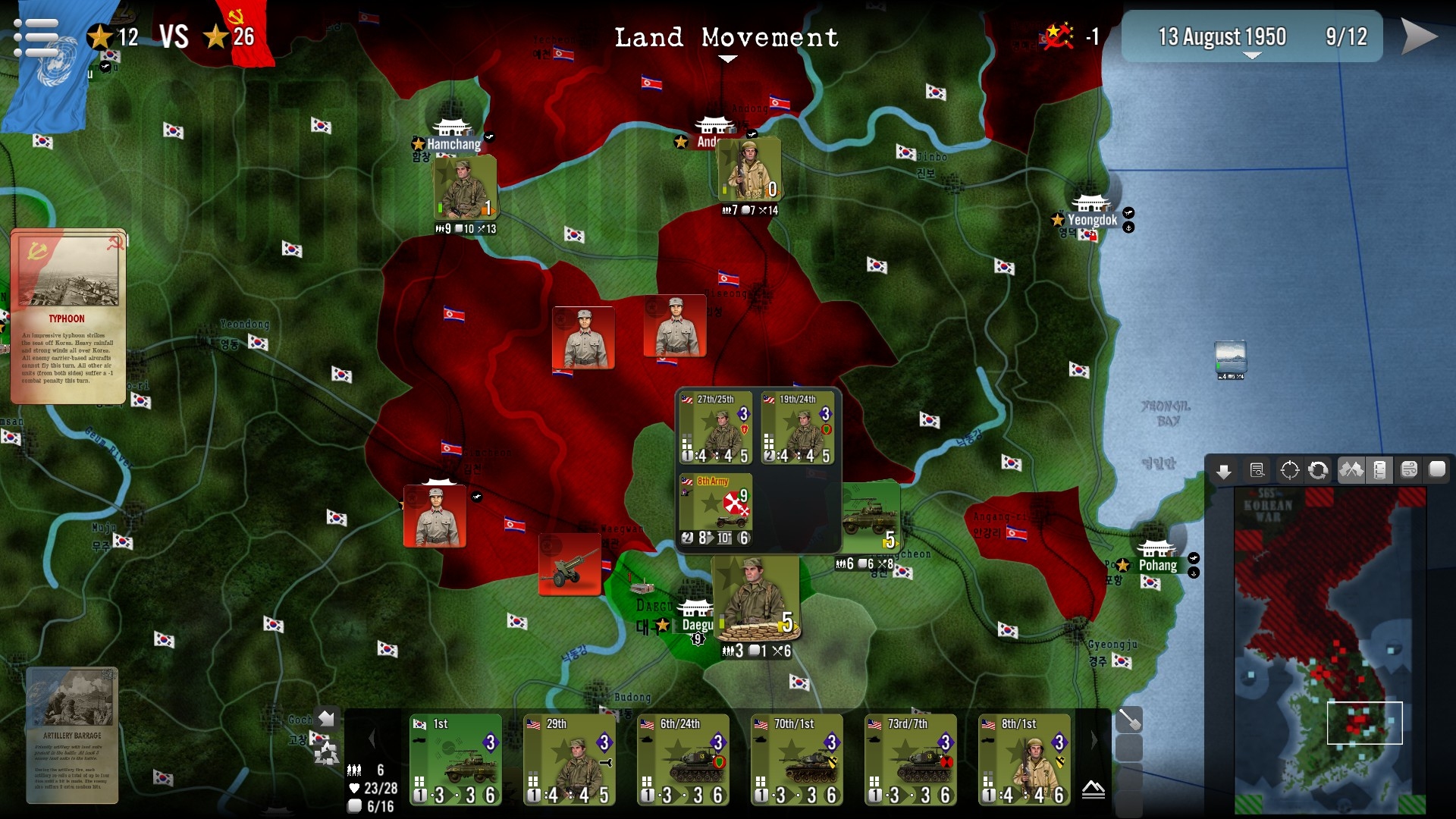 Overlooking the AI infirmities of the wargame engine pictured above was relatively easy when those infirmities were part and parcel of £2 Wars Across The World add-ons. Now they’re paraded by standalone titles costing up to 2400 new pence, turning a blind eye takes serious will power. 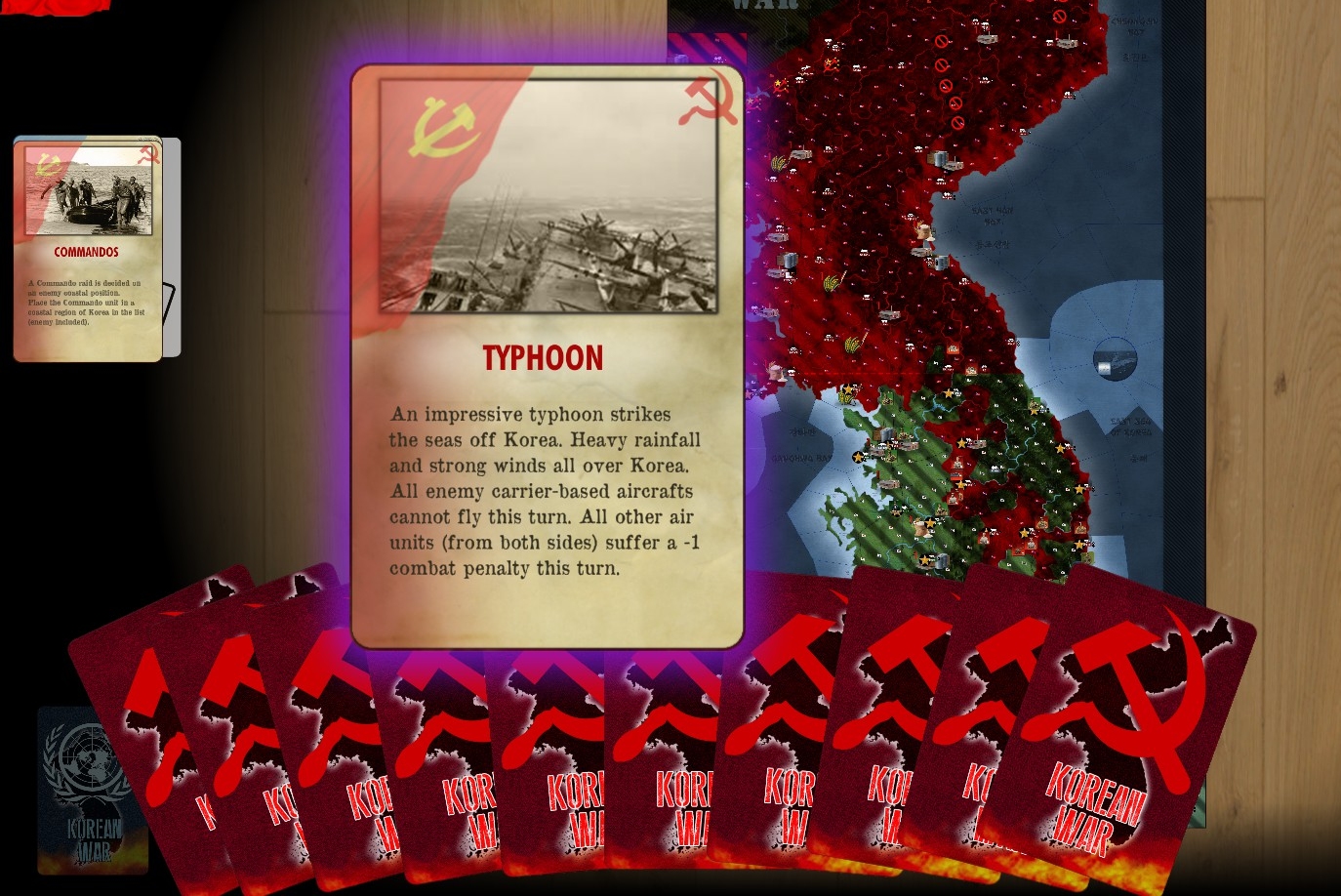 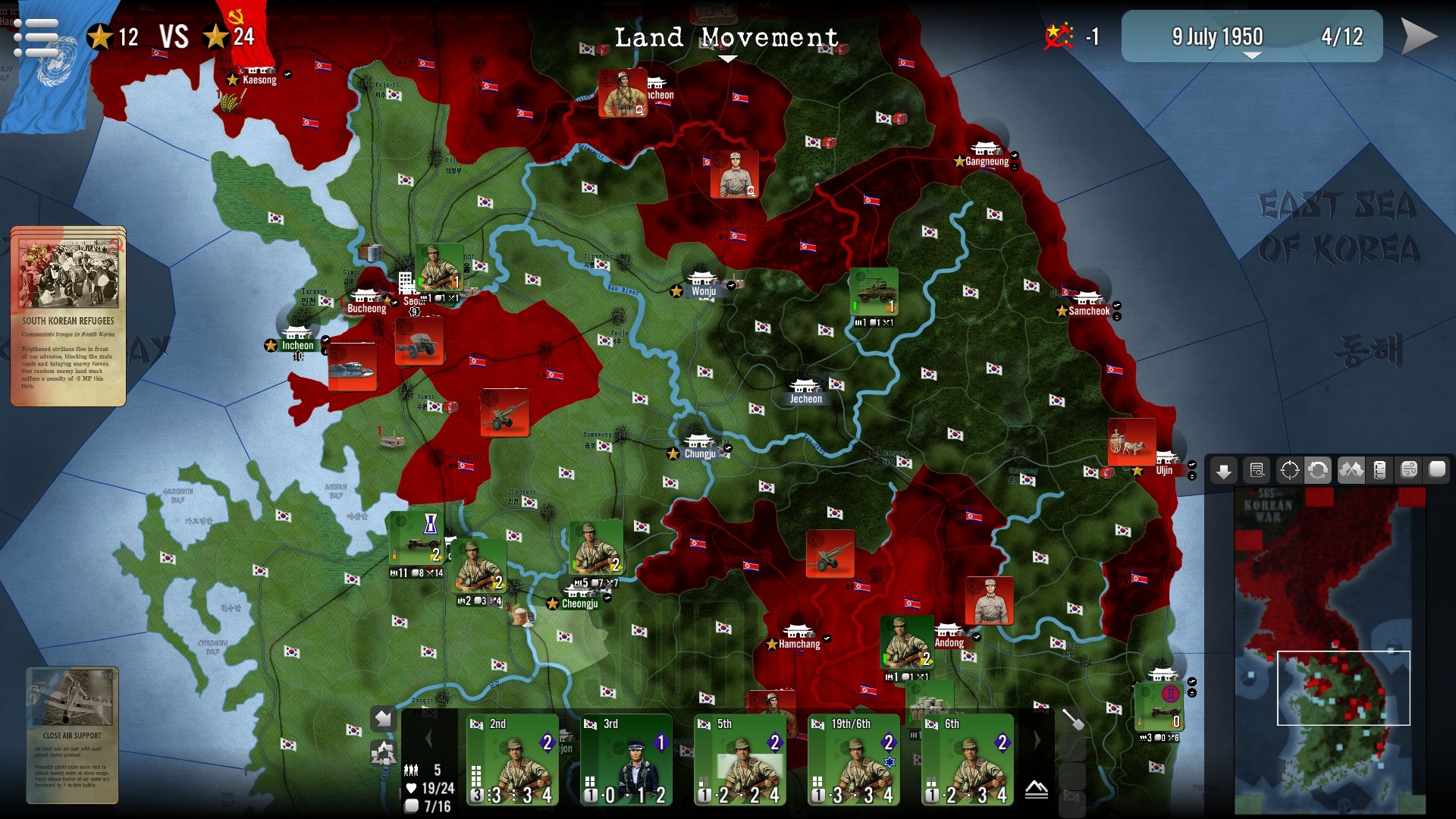 Despite selecting the ‘hardest side to play’ (the UN) and the toughest AI setting (Expert), I had little trouble turning a red tide that, in real-life, came awfully close to submerging the entire Korean Peninsula. By the final turn in mid September, 1950, I’d retaken Seoul and had units ranging north of the 38th Parallel. Kim Ill-sung’s forces were in disarray. Worse, I’d achieved this impressive ahistorical feat playing in a fairly slapdash manner. 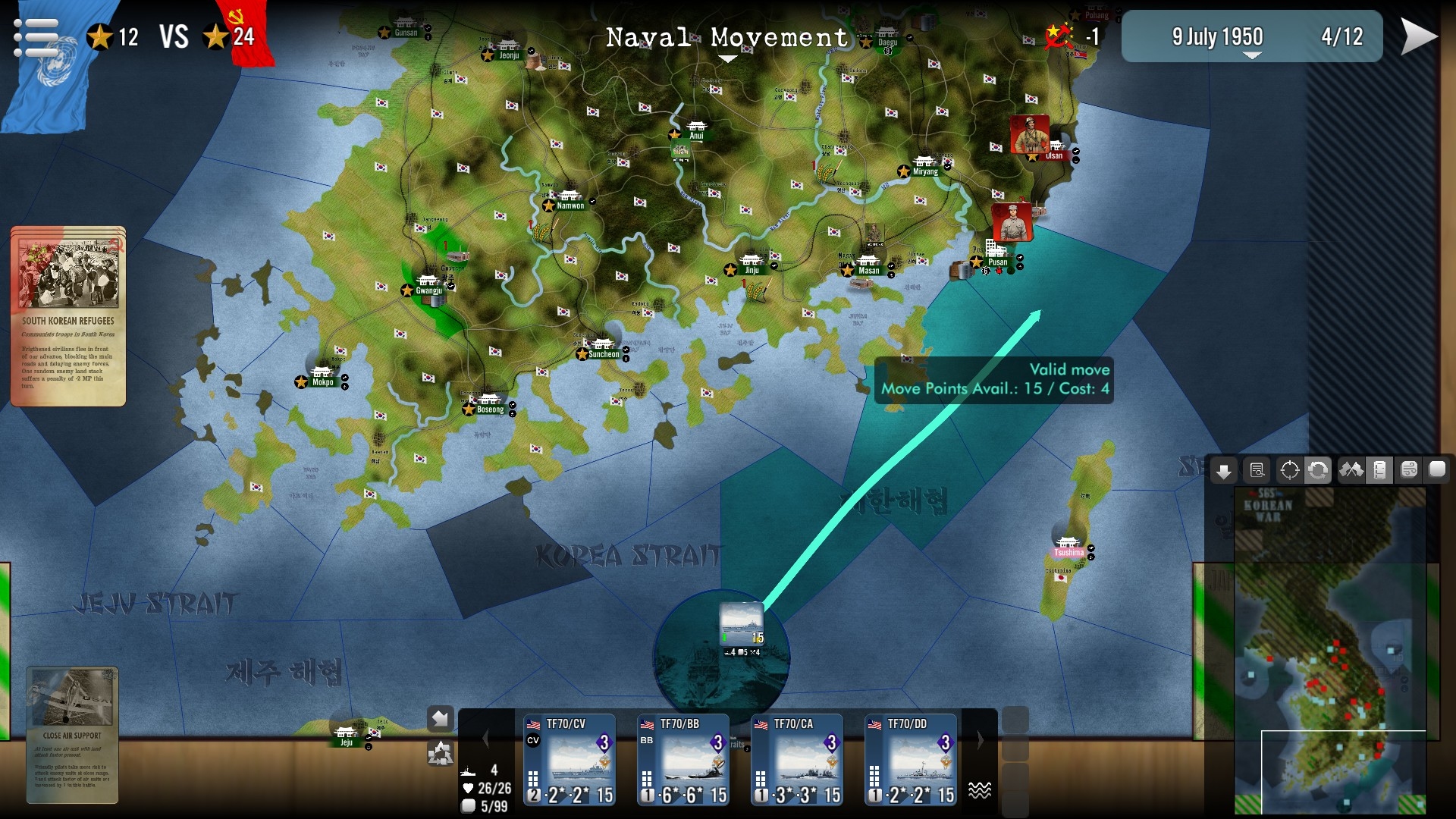 Early in proceedings I realised I wasn’t allowed to use my sizeable fleets of B-29 bombers to hit battlefield targets (they’re restricted to strategic bombing) and promptly forgot about them. Apart from acting as floating airstrips for my Corsairs and Panthers, my naval assets saw little action too. I felt able to neglect parts of my small, surprised war machine because, after the first few turns of panic and retreat, I realised I was facing a typically flawed SGS/WATW opponent. 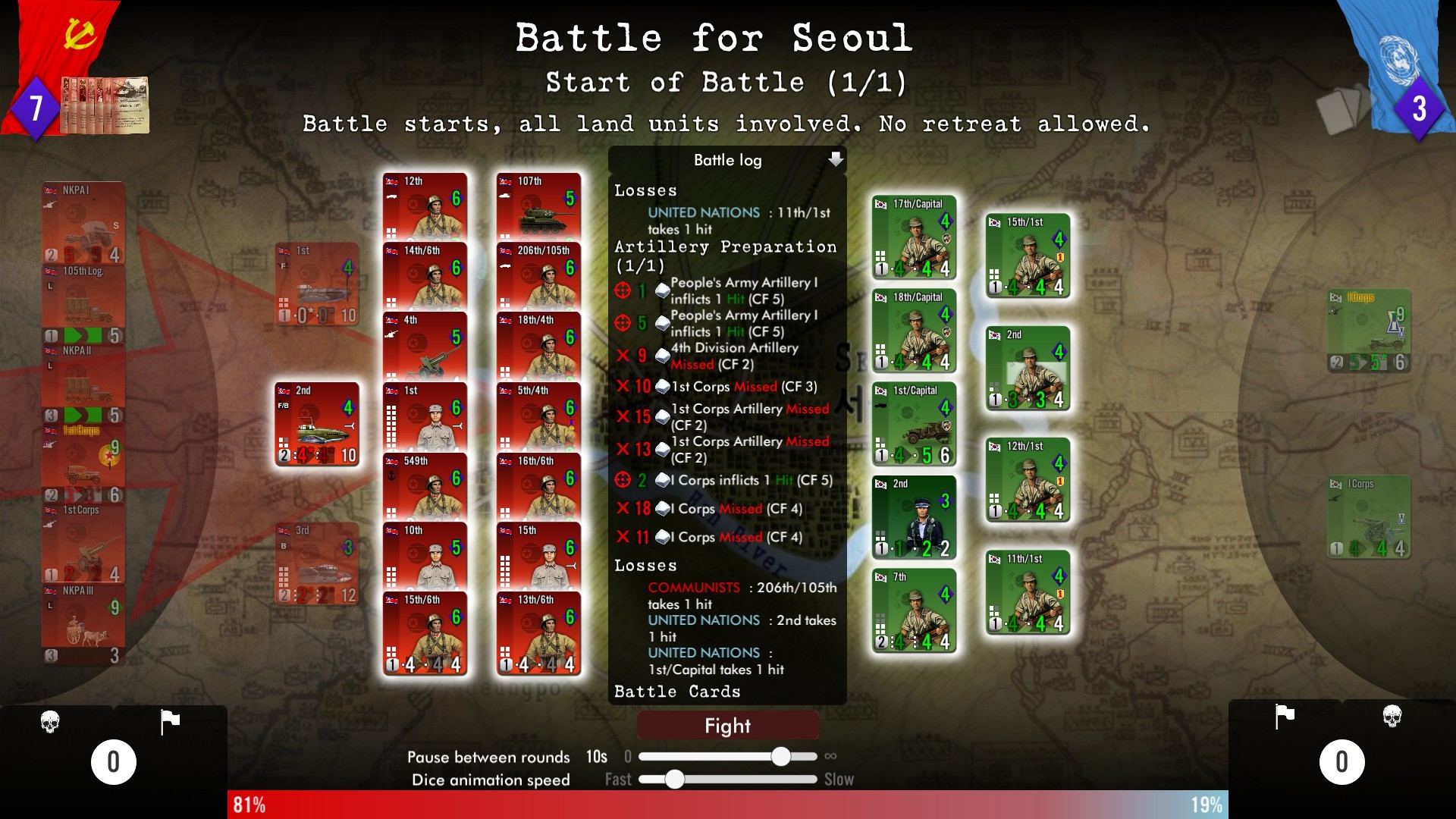 To their credit, the North Koreans showed no lack of aggression and ambition. What doomed them was what dooms the CPU’s side in most SGS titles, the inability to form a coherent frontline, to properly garrison captured VLs, protect supply lines, and guard rear areas. The further south the NKA pushed the more holes appeared in their front, the more opportunities there were for cheeky counter-thrusts and pocketing. Four weeks after the war’s start, one of their more enthusiastic counter stacks had reached Pusan, but elsewhere the Communists were so scattered and disorganised I could already smell victory. 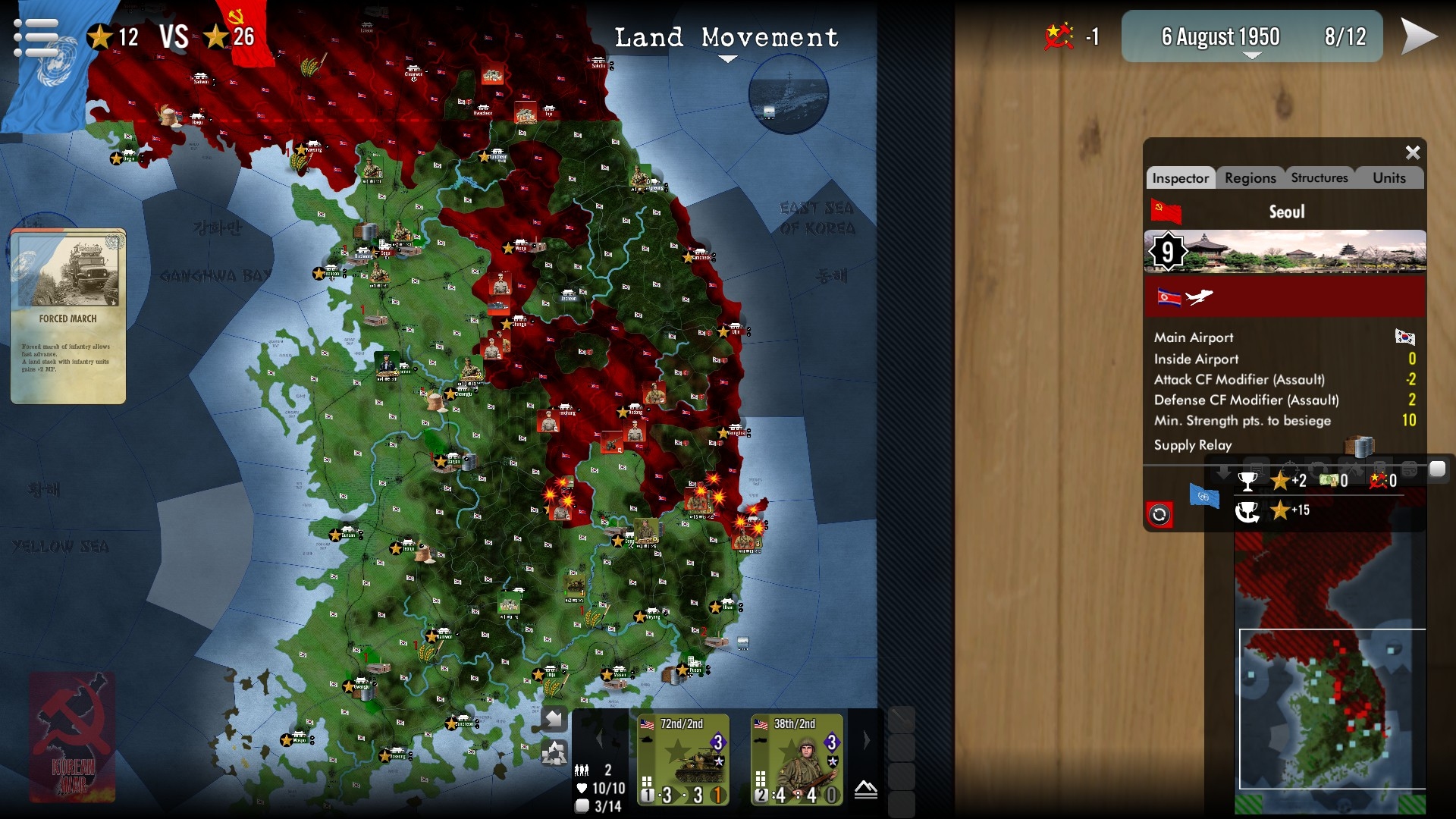 Does the computer player perform better in the game’s centrepiece, a monster 150-turn, ‘full war’ scenario with diplomatic and economic elements, NBC weapon options, and an estimated completion time of over sixty hours? Assuming I pull my finger out, that question will be answered in next Friday’s A2Z. 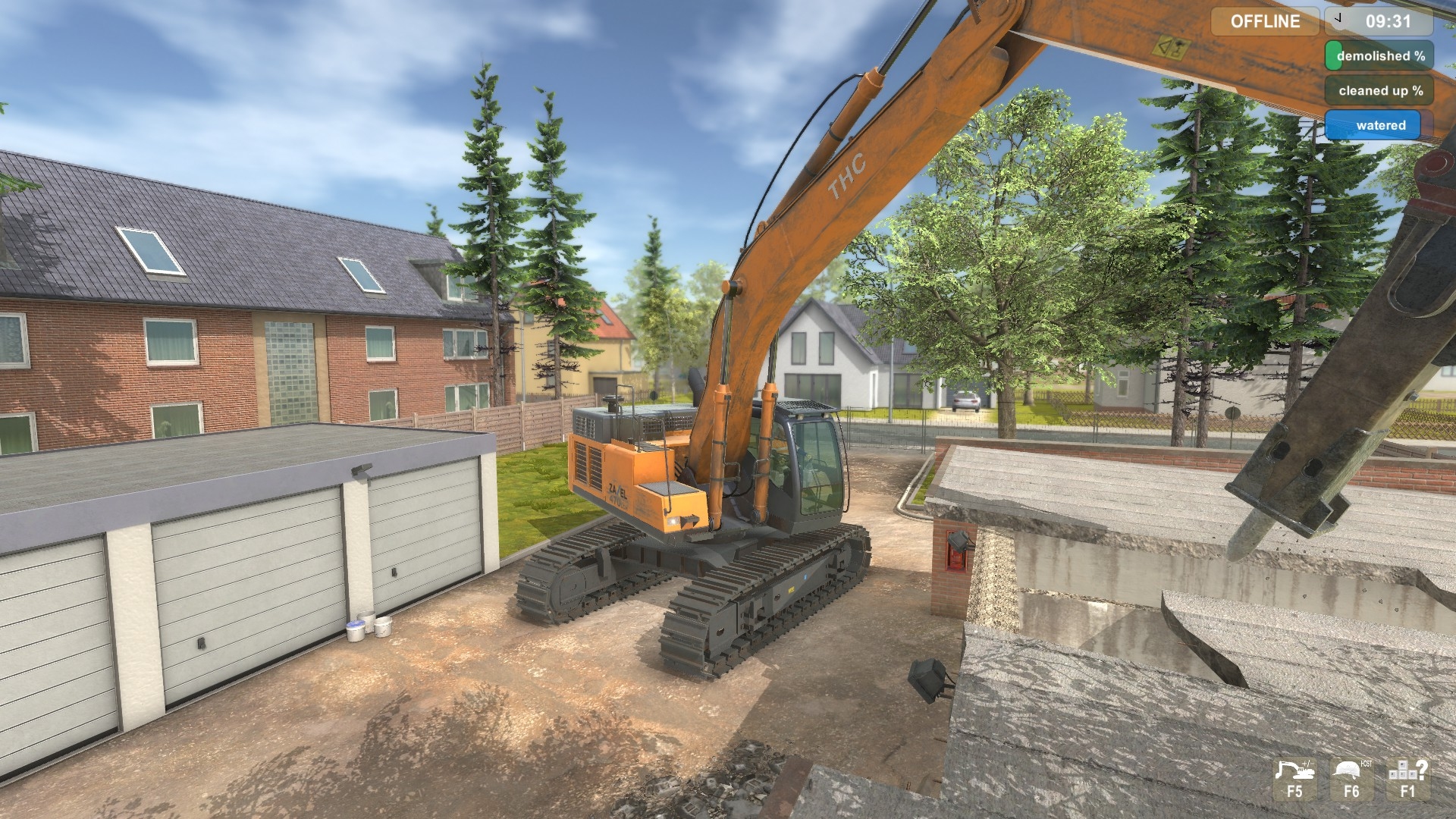 This £25 masonry molesting sim might not have made it into today’s selection if I hadn’t noticed that its creators, Darius and Barbara Bode, were veterans of the OMSI modding scene. Their Steam back catalogue whispered ‘realism’ and a cautious Demolition Pro Online recommendation from THC is the result. 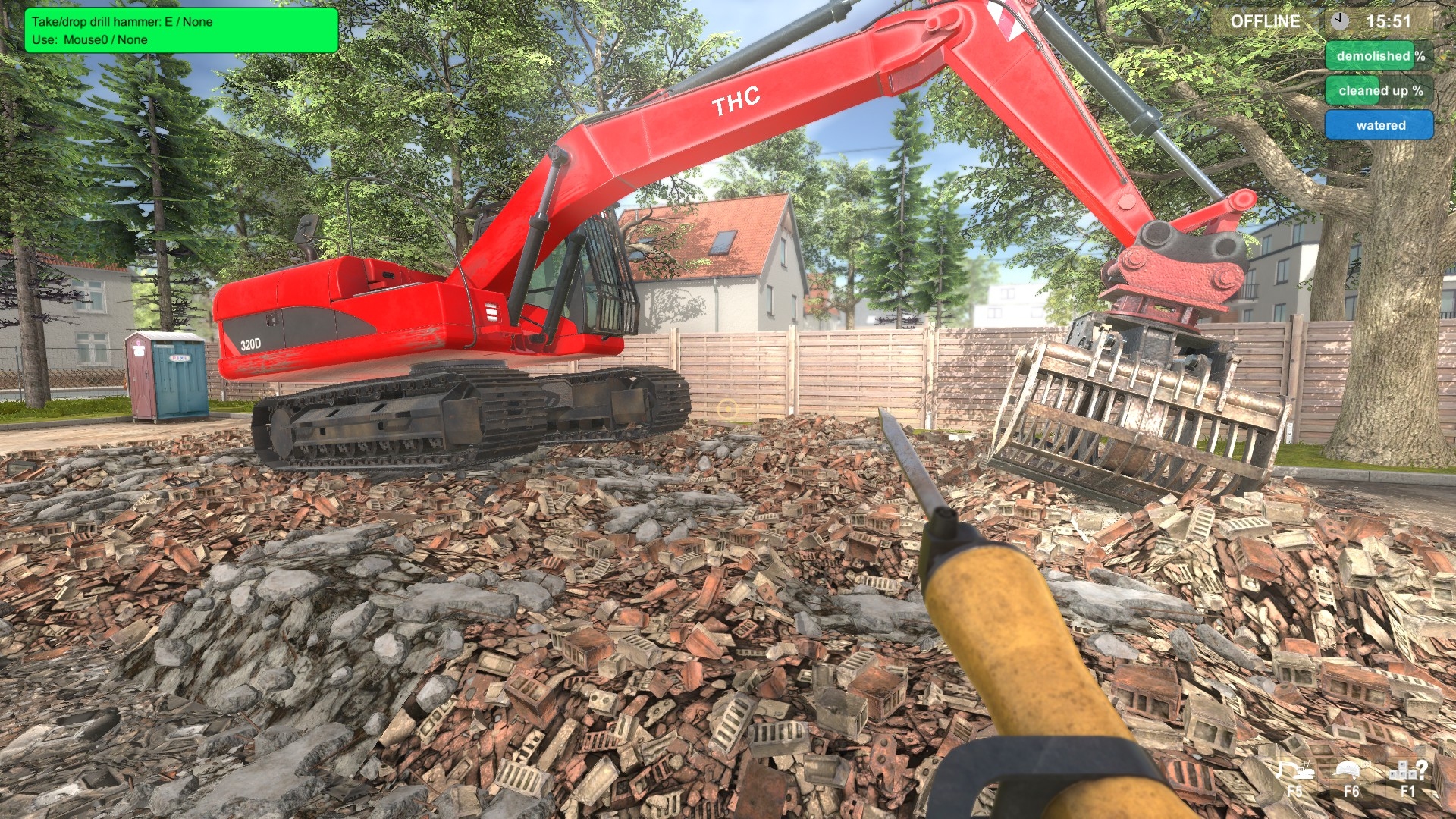 Cautious? DPO has more rough edges than one of the rubble mounds it encourages you to produce. I struggled to redefine the weird default keys, found I couldn’t quit the game without Task Manager help, and experienced the odd physics tantrum when attempting to attach tools. I don’t like the fact I’m forced to unlock venues/jobs one by one, don’t get a wrecking ball or a scrap magnet… 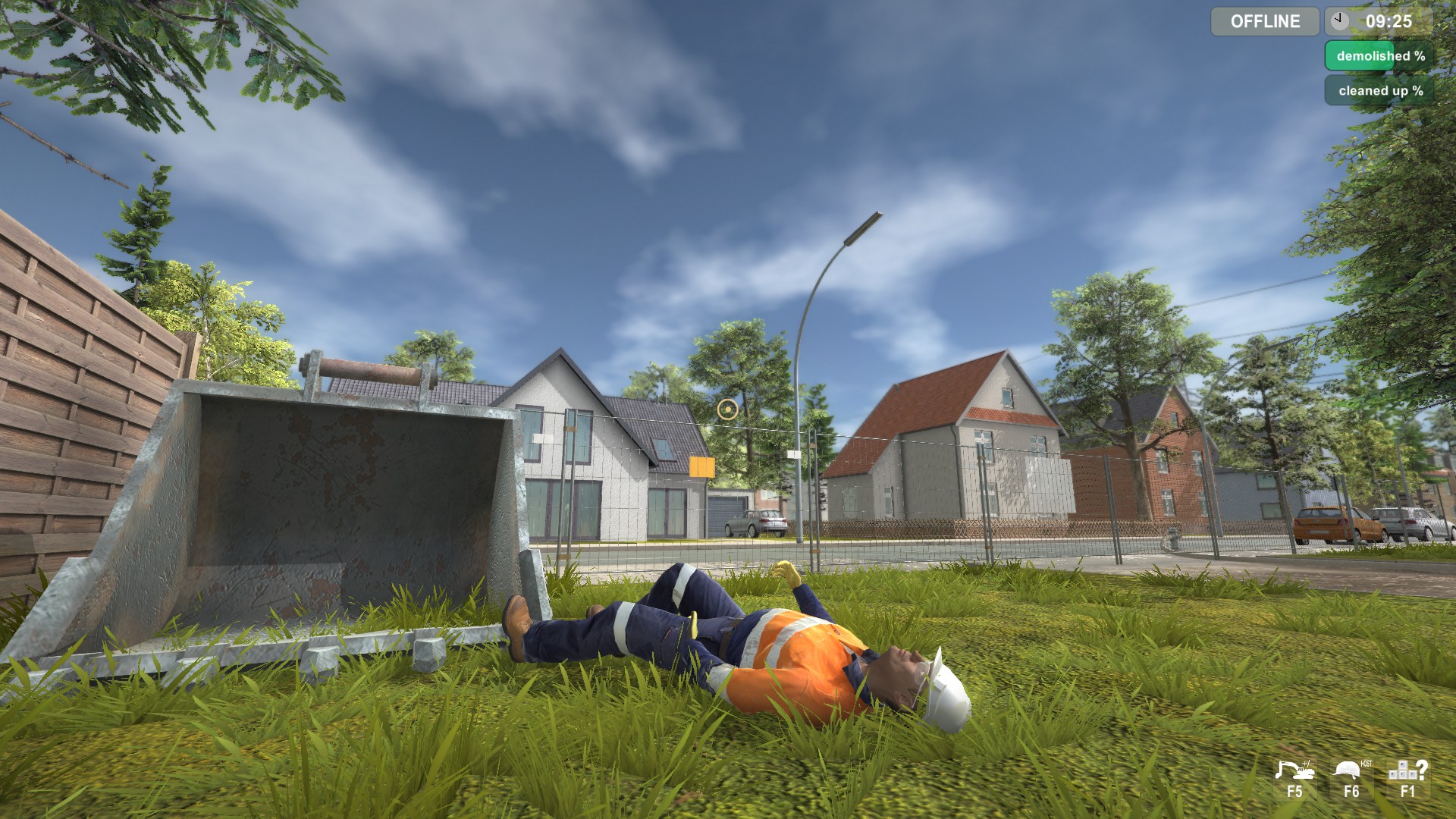 …and can kill my avatar by moving him close to a detached bucket.

Then there are occasional clipping issues – times when pieces of equipment penetrate walls or roofs without damaging them. 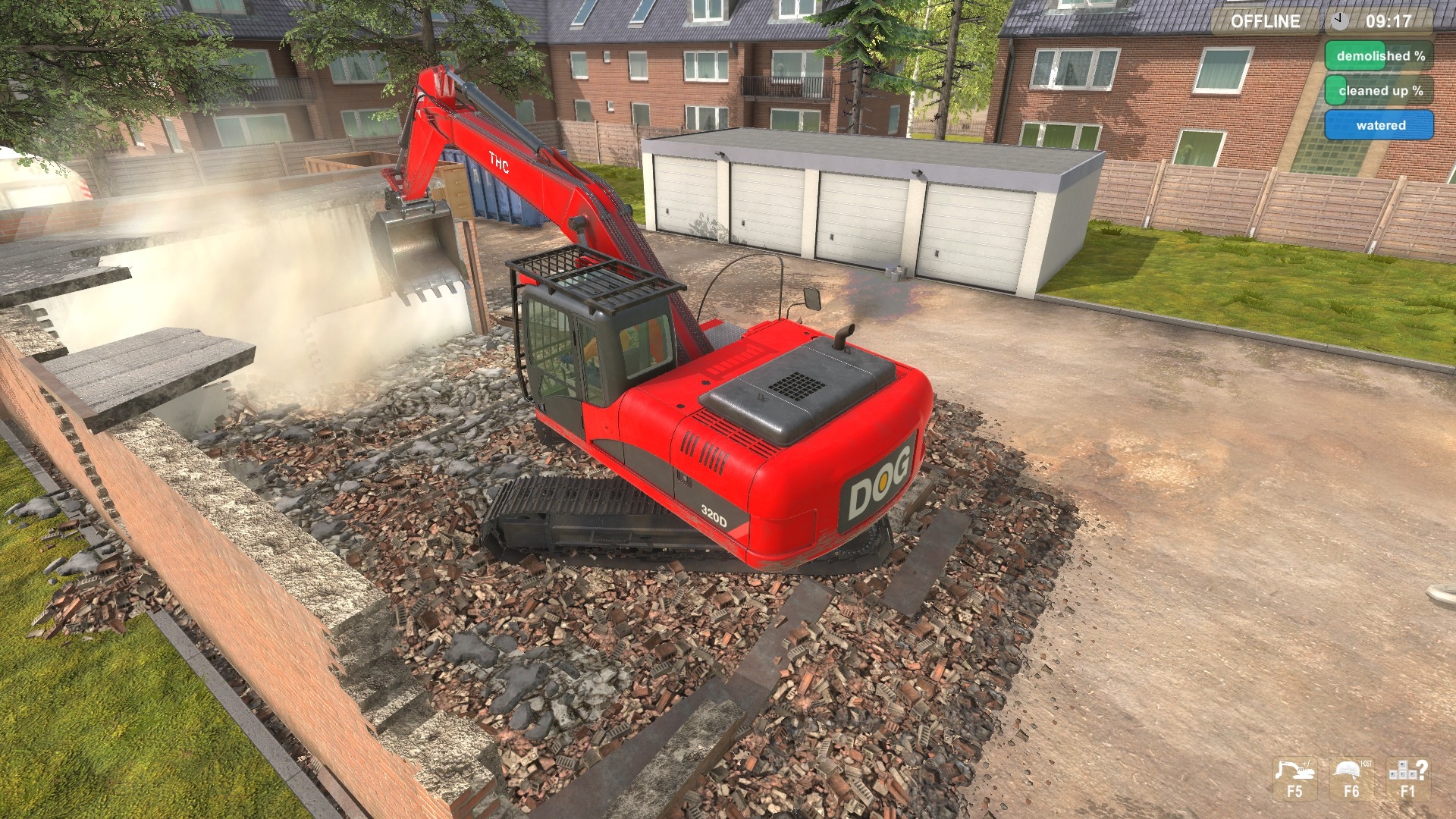 If the Bodes hadn’t modelled their plant with care, and put considerable effort into ensuring buildings disintegrate naturalistically, I’d be laying into DPO with a metaphorical 20-pound sledgehammer right now. 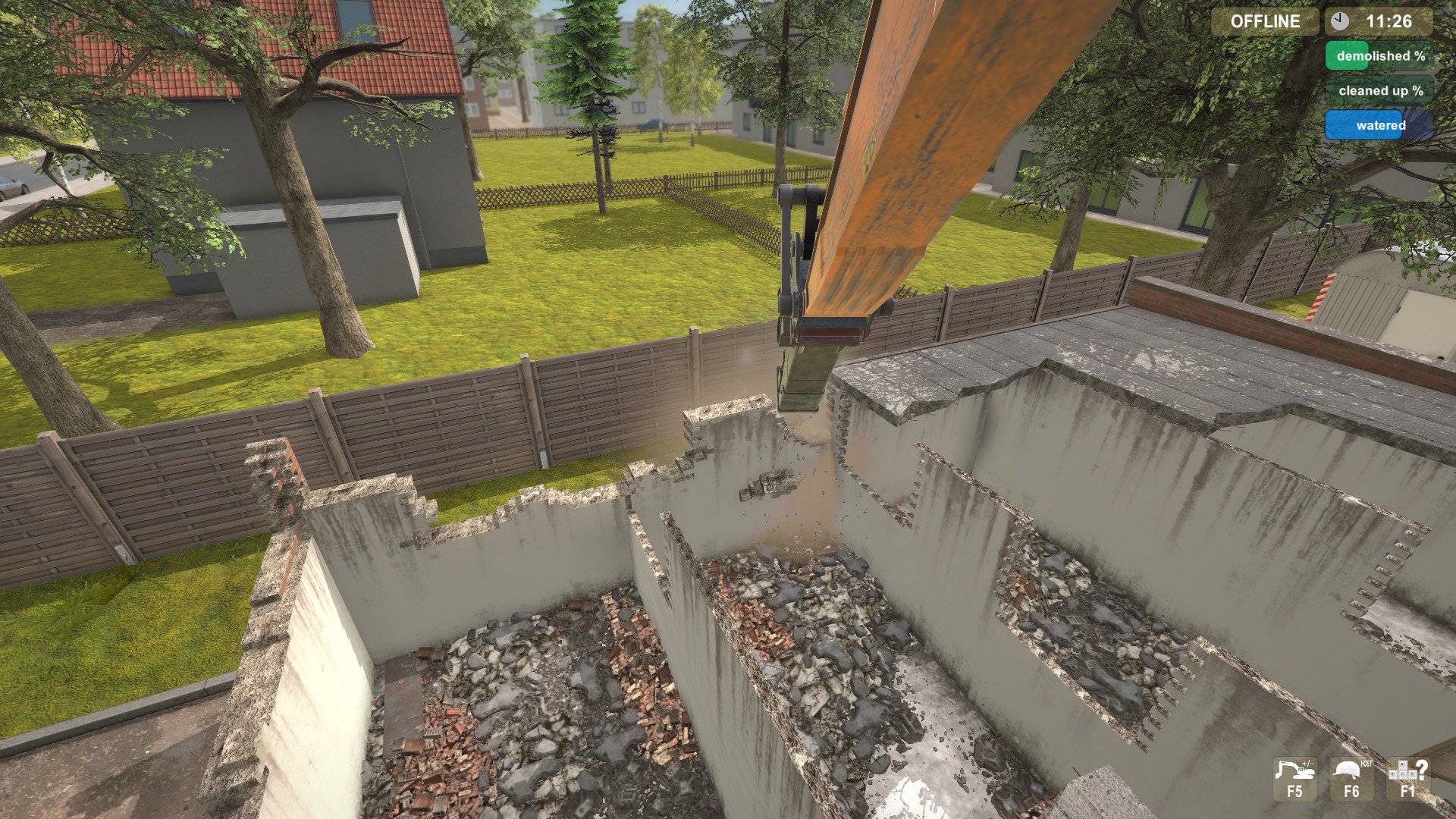 I say ‘buildings’… In the three hours I spent contentedly pummelling, swiping, and grabbing, I only managed to crumble one row of lock-up garages, and that job never got finished because the sim insisted I track down every last scrap of intact brickwork (tricky when rubble heaps start to form) and sort the debris I generated into two bins (metal and minerals). Perhaps I’d have made it to Mission 2 if I’d approached Mission 1 differently. 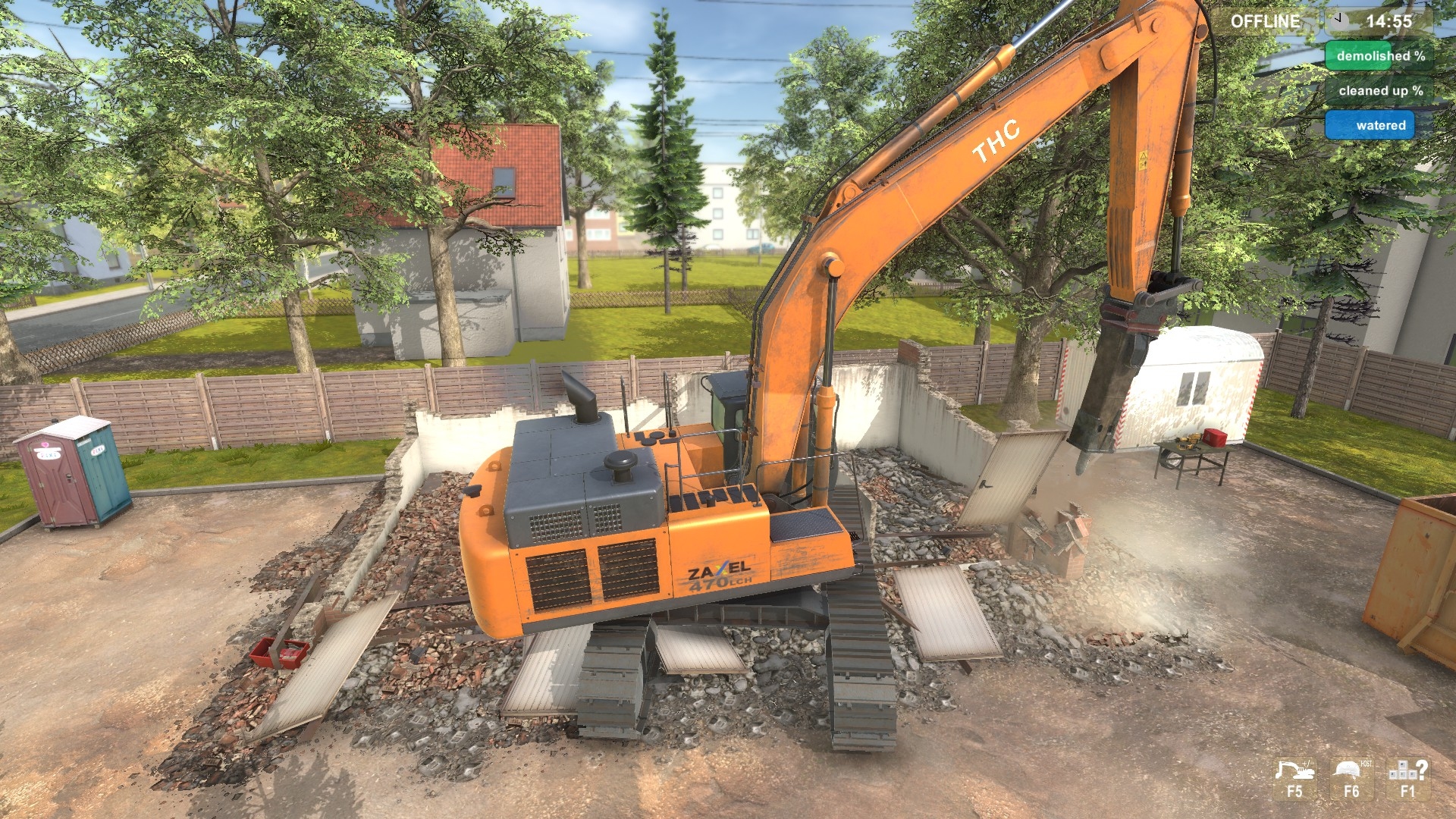 I put up with the irritations because I’m a sucker for sim vehicles with individually controlled caterpillar tracks and complex articulated limbs. Because positioning the tip of the hydraulic breaker in exactly the right place then watching it THUMP-THUMP-THUMP another chunk* of brickwork or concrete into submission is profoundly pleasurable.

* Those chunks are pre-defined and a little regular at times 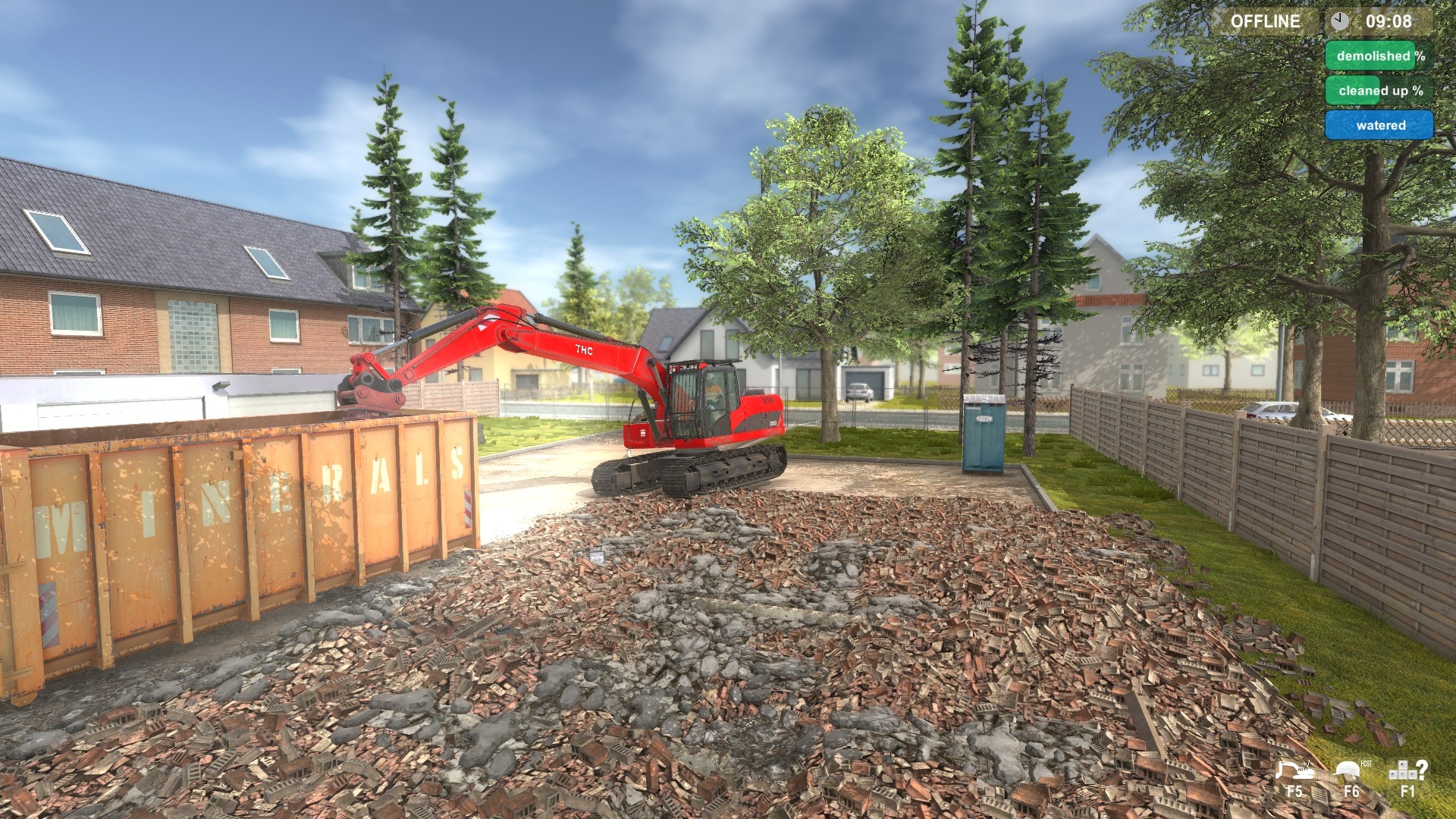 As I’ve said, the physics aren’t faultless but they’re good enough to produce satisfying moments like the one where I realised I could reduce the time I spent trundling over to the recycling bins by dragging them closer to my work position with my mighty claw.