Several feisty eleventh hour orders should guarantee Operation Oryx goes out with a bang rather than a whimper. When we parted company last Monday, three of our mortarmen were running the gauntlet, our Patton was scrutinising a small patch of trees for signs of an elusive T-80, and two of our ‘orphans’ were attempting to neutralise a pair of surprisingly doughty T-55 survivors.

As much as I love 2nd gen CM, attempting to orchestrate delicate infantry actions with it, can feel like knitting in boxing gloves.

The attempt by Bravo and BRDMan to bypass/neutralise the T-55 crewmen by the hotel junction, goes fairly well at first. Hosed by an M-16 and an AK-74, the Makarov clutchers fail to prevent our AC commander pushing on from the garage. Things start going wrong when the BRDMan picks a ‘hotspot’ dangerously close to the occupied building and Bravo chooses an inopportune moment to reload.

The Pod tankers take full advantage of their stroke of good fortune. Pistol shots ring out and BRDMan goes down like a sack of celeriac.

In a parallel universe, one of the killers then dashes outside, snatches the dropped AK, and starts making life extremely unpleasant for the prostrate Bravo. In ours – possibly realising they’re running short of ammo – the two foes drop their peashooters and raise their hands.

Sadly, Turn 30 also claims other Zen lives. Only one of our sprinting mortarmen reaches the relative safety of the M113.

Having watched his first shot fly over the map edge, the T-80 gunner aims lower for his second. This time, mud plumes and men fall.

The last significant action of this year’s co-op Combat Mission marathon involves the engagement’s two most modern and capable MBTs.

Unable to clock the T-80 from his current position, and conscious of the trouble an enemy tank on Strupnic’s south-western edge could cause to the withdrawing ambushers, the Patton commander decides that he has little choice but to advance in Turn 30.

Watched by the Dragoneers and the LMG team, the M60A1 rolls northward. The 80 metres of battlefield that separates the two heavyweights becomes 60 metres then 40 metres, and still the Patton crew can make out nothing man-made amidst the vegetation ahead.

At T+30, with its main gun shaded by the very trees that obscure its quarry, our tank reaches its final waypoint and halts. Is this how Operation Oryx is destined to end? With two apex predators rendered blind by dense foliage, parked within spitting distance of each other? 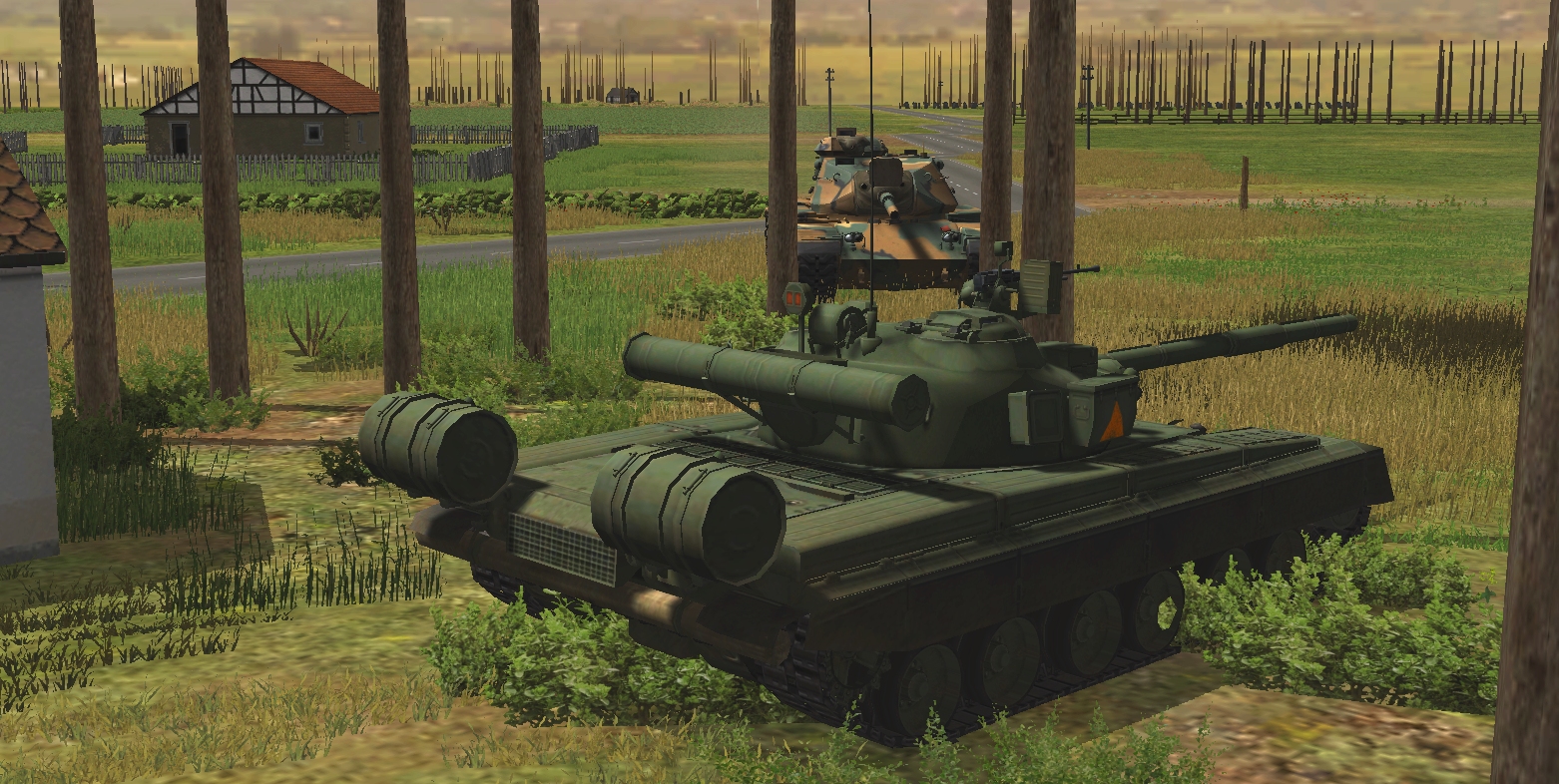 No. At T+36, CMCW’s complex LoS routines choose to reveal the T-80 to the Patton. A few seconds later the Zen gunner squeezes his trigger knowing he cannot miss.

Hang on a would-you-credit-it WEGO minute! That hit text says “HIT Armor Skirt” and no more. The bally thing isn’t dead, and its main gun is swinging in our direction! Oh crikey, this doesn’t look good.

But, luckily for the Blue Team, Fate isn’t quite that cruel. The enemy gunner might have revenge on his mind, but his driver has escape on his. The shaken T-80 reverses, disappearing from view.

Red contact icons show it crossing the small yard to its rear. In the final second of the turn, the extremely fortunate MBT comes to a stop, facing south, close to the wall of the agri merchant’s yard.

Because the T-55 that killed Muttley last turn didn’t advance this sixty, and the T-55 north of the highway, made no effort to cross the M2, Trajanov’s force should, in the unsimmable turns that follow, be able to head back the way they came without fear of 100mm surprises. Something I’ll bear in mind when I deliver my post-battle analysis on Friday.

Many thanks to everyone who issued orders, proffered advice, or cheered from the sidelines during the past five (!) months. Your enthusiasm, persistence, and good-humoured teamwork means this is unlikely to be THC’s last play-by-comment CM game.