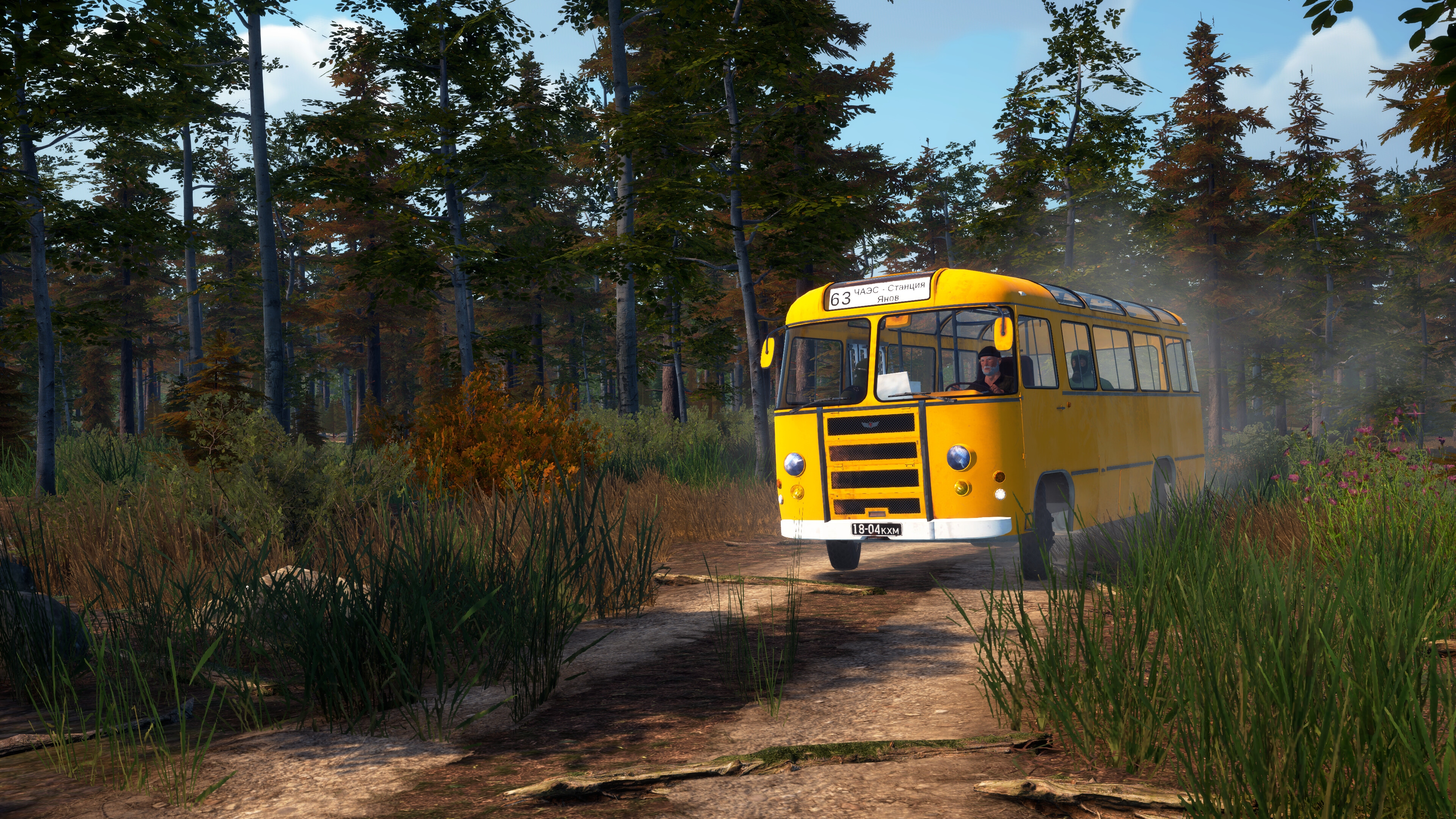 There is a school of thought that believes public transport vehicle sims don’t need danger or excitement to engross – that shoe-horned thrills may actually detract from their prosaic charm. I am the stern headmaster of this school, the bohemian drama tutor, the generous dinner lady, the cheerful, ex-navy caretaker, and the sadistic nit nurse. 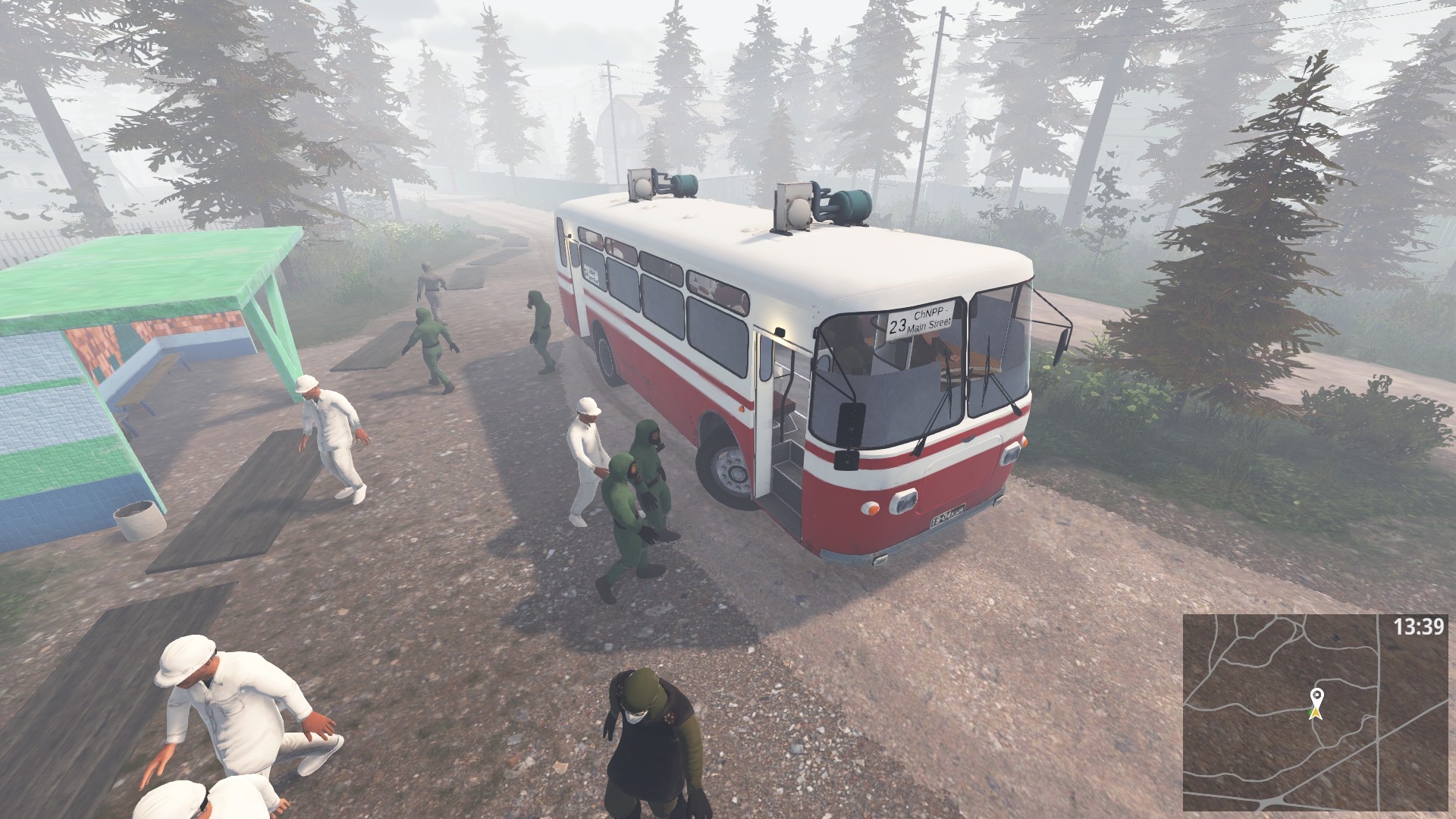 You’d have to be a seriously sodden counterpane to scowl at all nineteen of Bus World’s scenarios. Yes, some like the one where you need to outrun an Asian tsunami, the one where you must stay within a narrow 10 kph speed band, and the one where your conveyance irrevocably overheats if you forget to switch off the engine and coast every few hundred yards, are horribly contrived and more than a bit maddening. 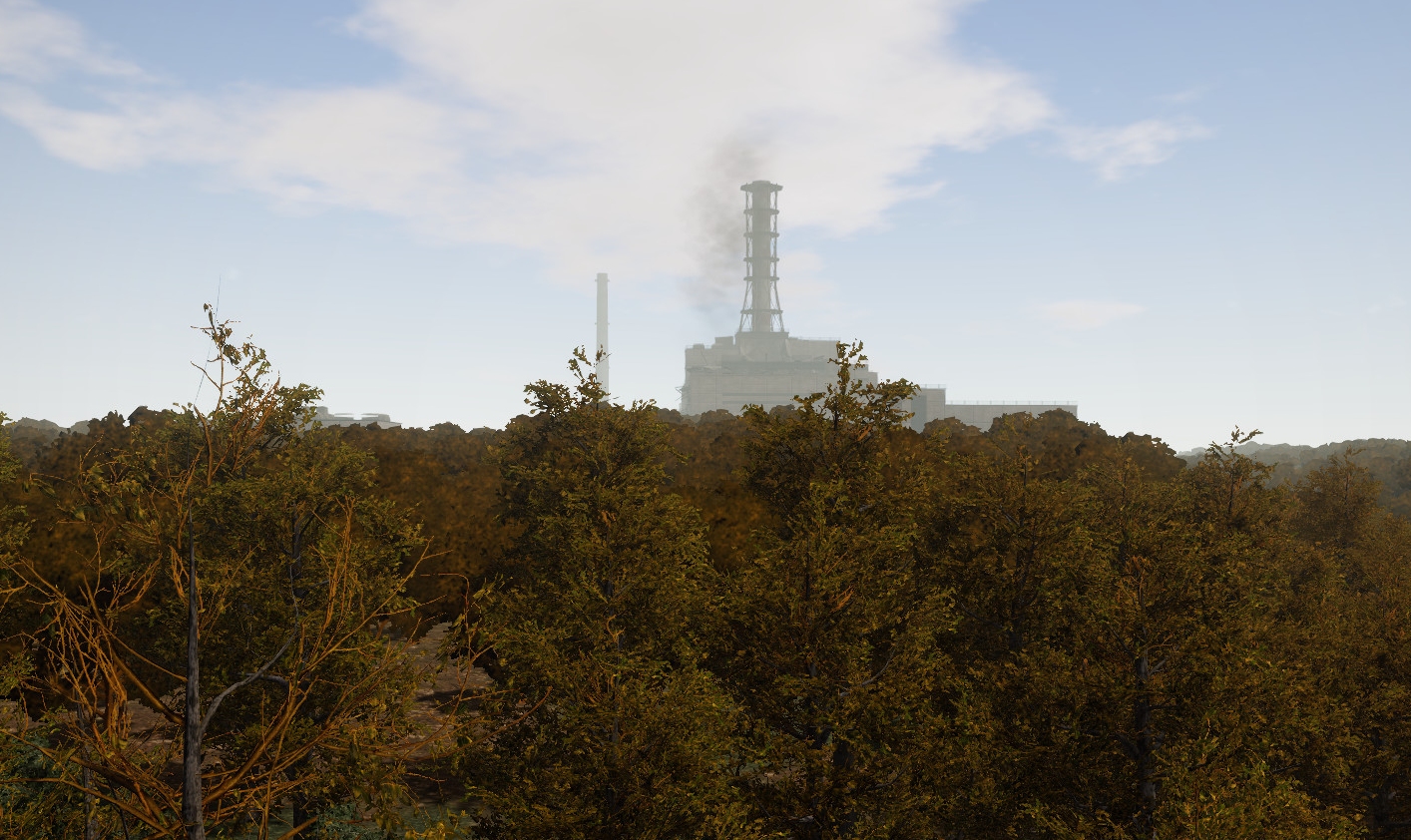 But emerging from a mist-wreathed pine forest with the wail of emergency sirens in your ears, and seeing Chernobyl Nuclear Power Plant up ahead, spewing smoke, it’s impossible to remain entirely unmoved. 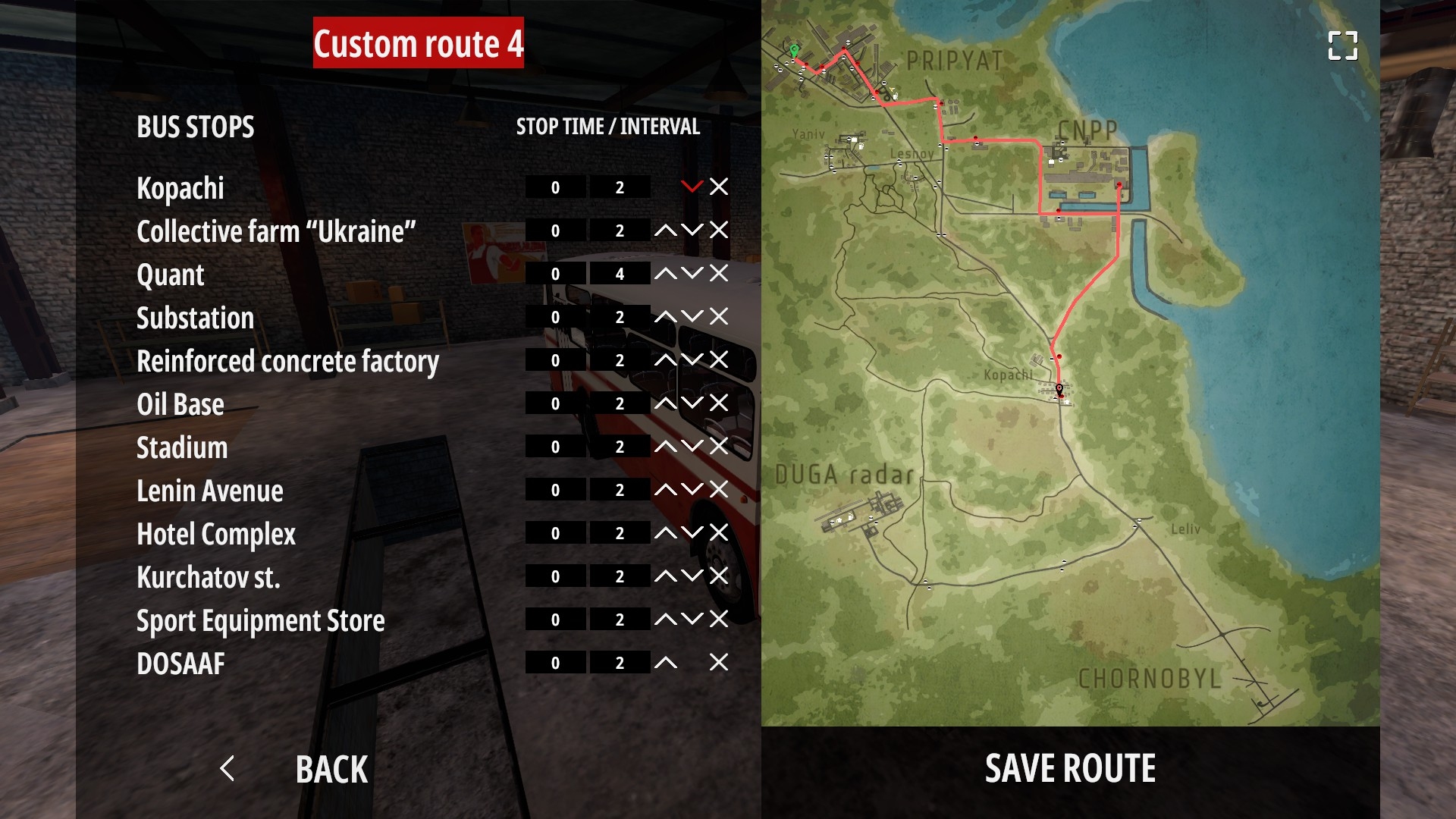 KishMish’s latest comes with a hilly Chinese coastal map in addition to the fairly flat Chernobyl one. Tiring quickly of the pedantic disaster-laced missions, I’ve spent most of my time driving around the Ukrainian environment in ‘free mode’. Several prefabricated routes are available in this option, or, if you prefer, you can click a selection of stops on the map and create your own custom service. 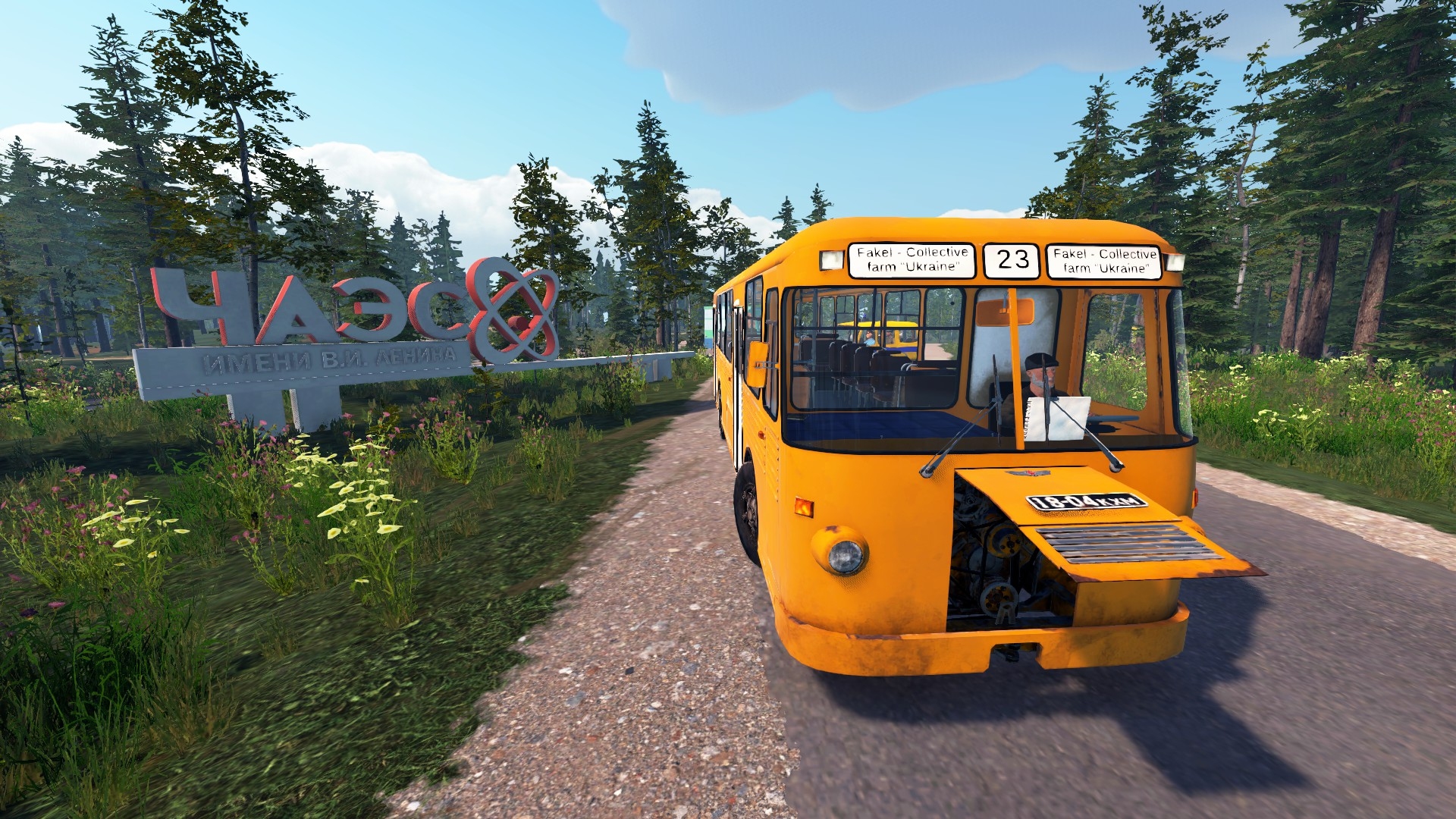 Naturally, if you shun the scenarios, you get pre-calamity versions of the venues. With no radiation, forest fires, tornadoes, earthquakes, or tidal waves to fret about, PSV pilots are free to enjoy spaces that, in the case of Chernobyl at least, come dotted with lots of nicely observed period details and vehicles. Striking mosaic-adorned bus shelters punctuate routes that often start and end on swish boulevards adorned with grandiloquent socialist slogans. Include villages in your timetable and chances are you’ll need to navigate unmetalled forest tracks now and again. 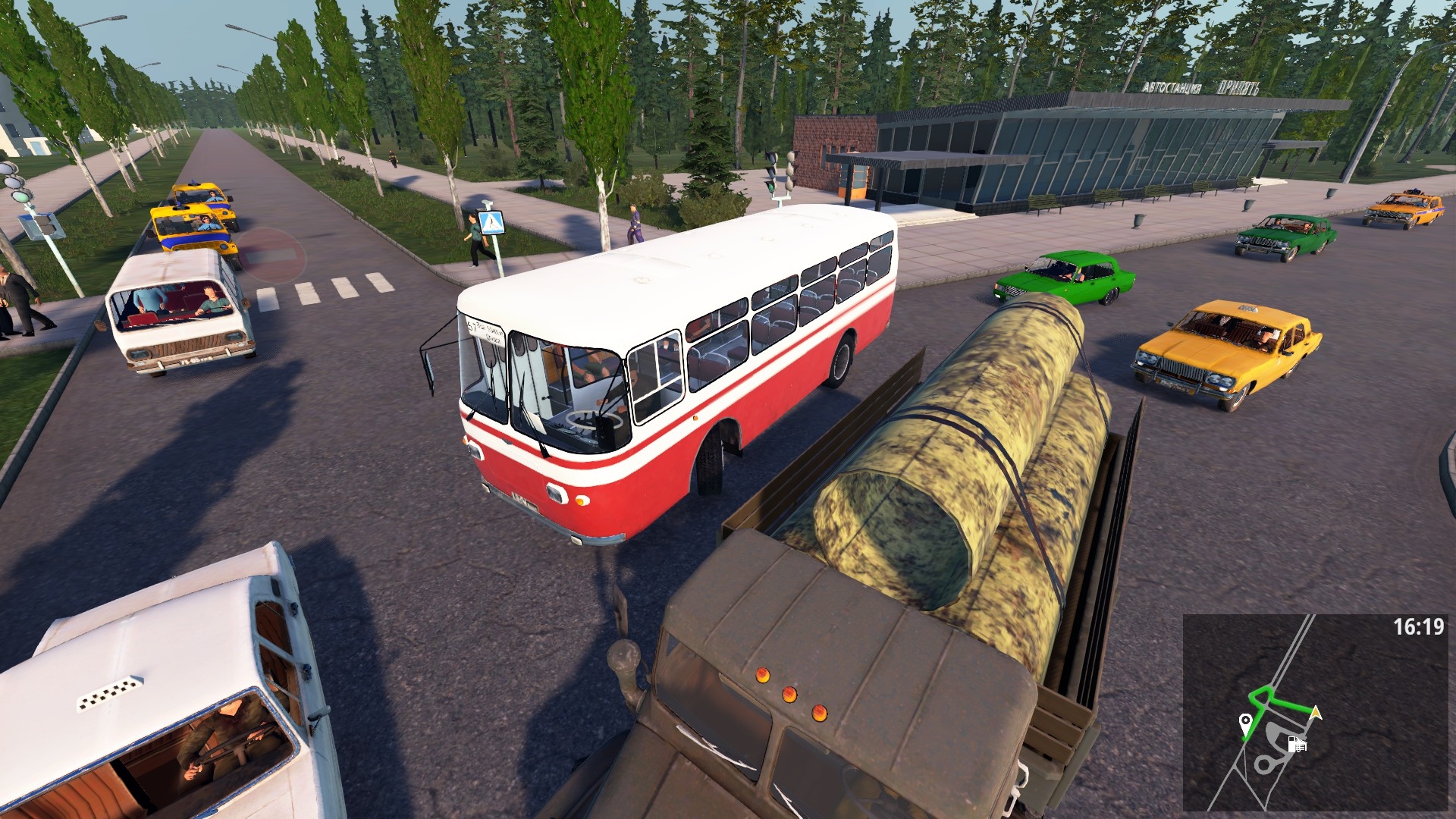 ‘Free mode’ might be flexible but it’s not completely stressless. If you’re interested in unlocking the full range of buses, paint jobs, and modifications as quickly as possible, you’ll want to avoid the prangs, tardiness, and traffic offences that slow XP accumulation. Occasionally, because of fallible traffic AI, this is easier said than done. 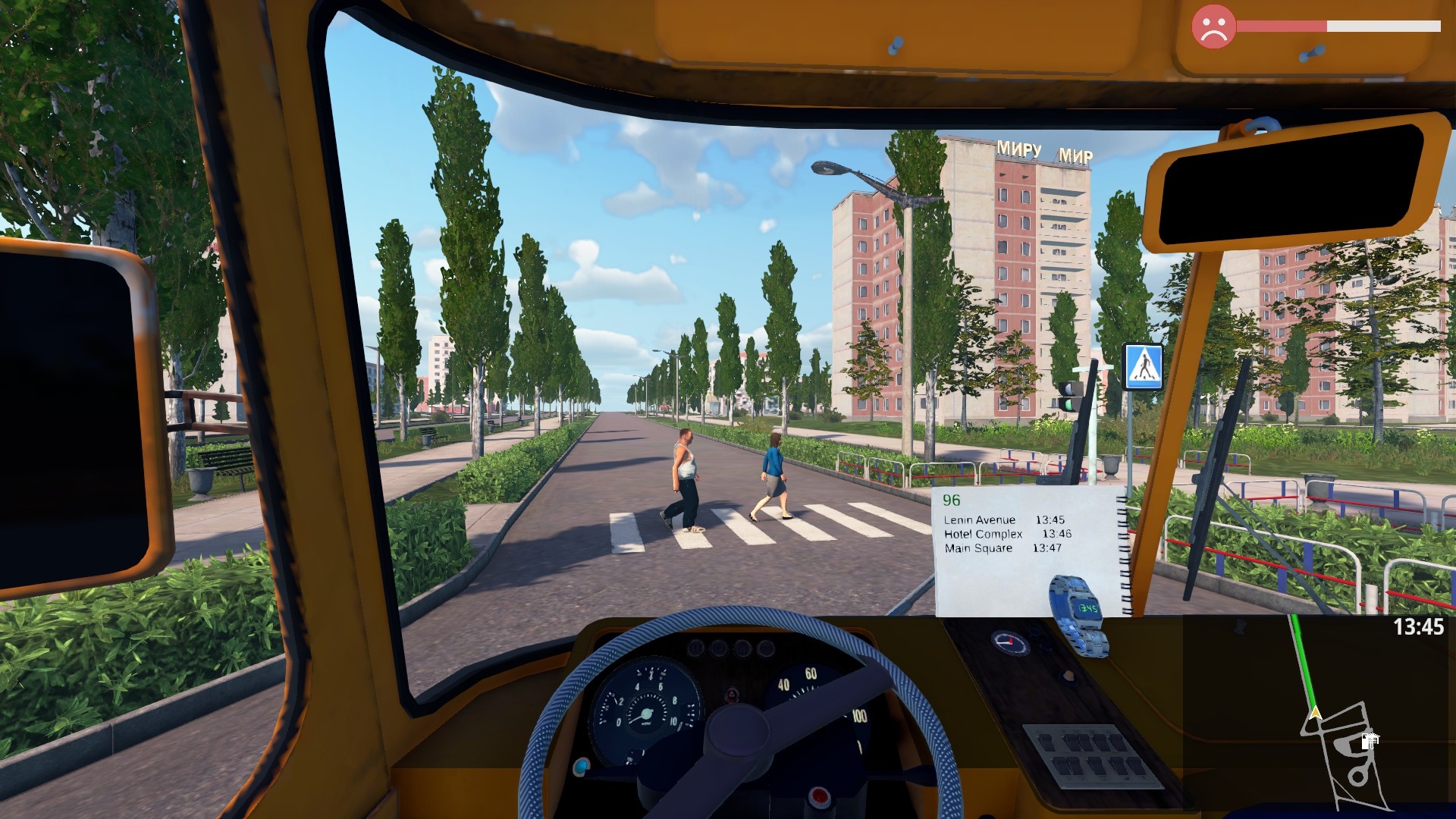 I’d be much more inclined to chase unlocks if the sim’s generic people movers were modelled with a little more TLC. Anyone spoilt by the best OMSI has to offer, will probably find KishMish’s conveyances a tad colourless. Thanks to M-R-Software, I now expect  deafening transmission whine, teeth-loosening pothole interactions, and body roll capable of toppling drunks and penduluming ponytails. Sadly, Bus World’s physics and audio remind me more of SCS Software and TML-Studios’ output than the sim that, back in 2011, single-handedly turned me into a bus enthusiast. 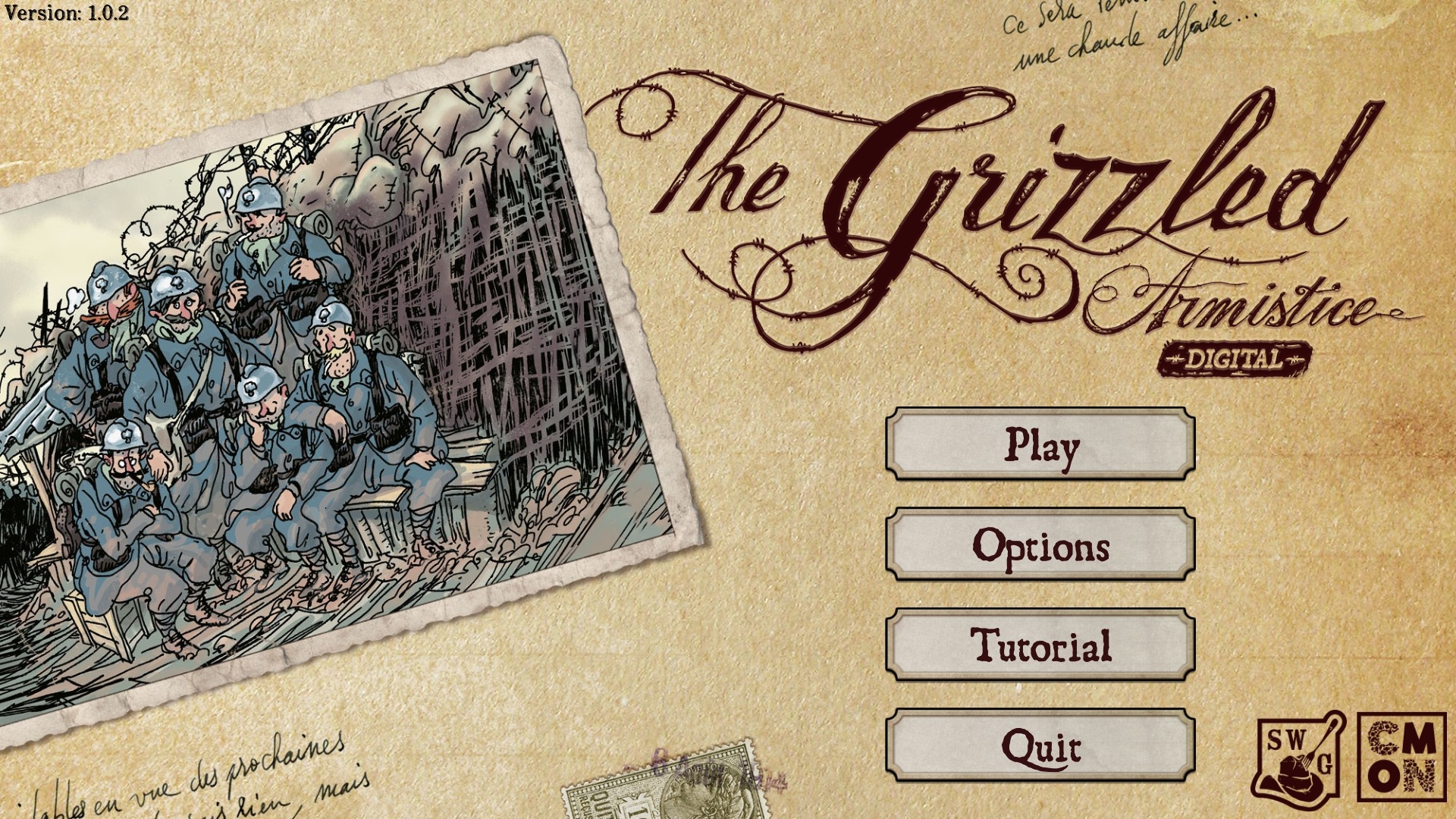 Can a co-op card game about four French soldiers struggling to survive on the Western Front during WWI captivate if three of those soldiers are controlled by an entity with all the empathy and compassion of a Russell Hobbs 24580 Digital Deep Fat Fryer?

Happily, it seems so. 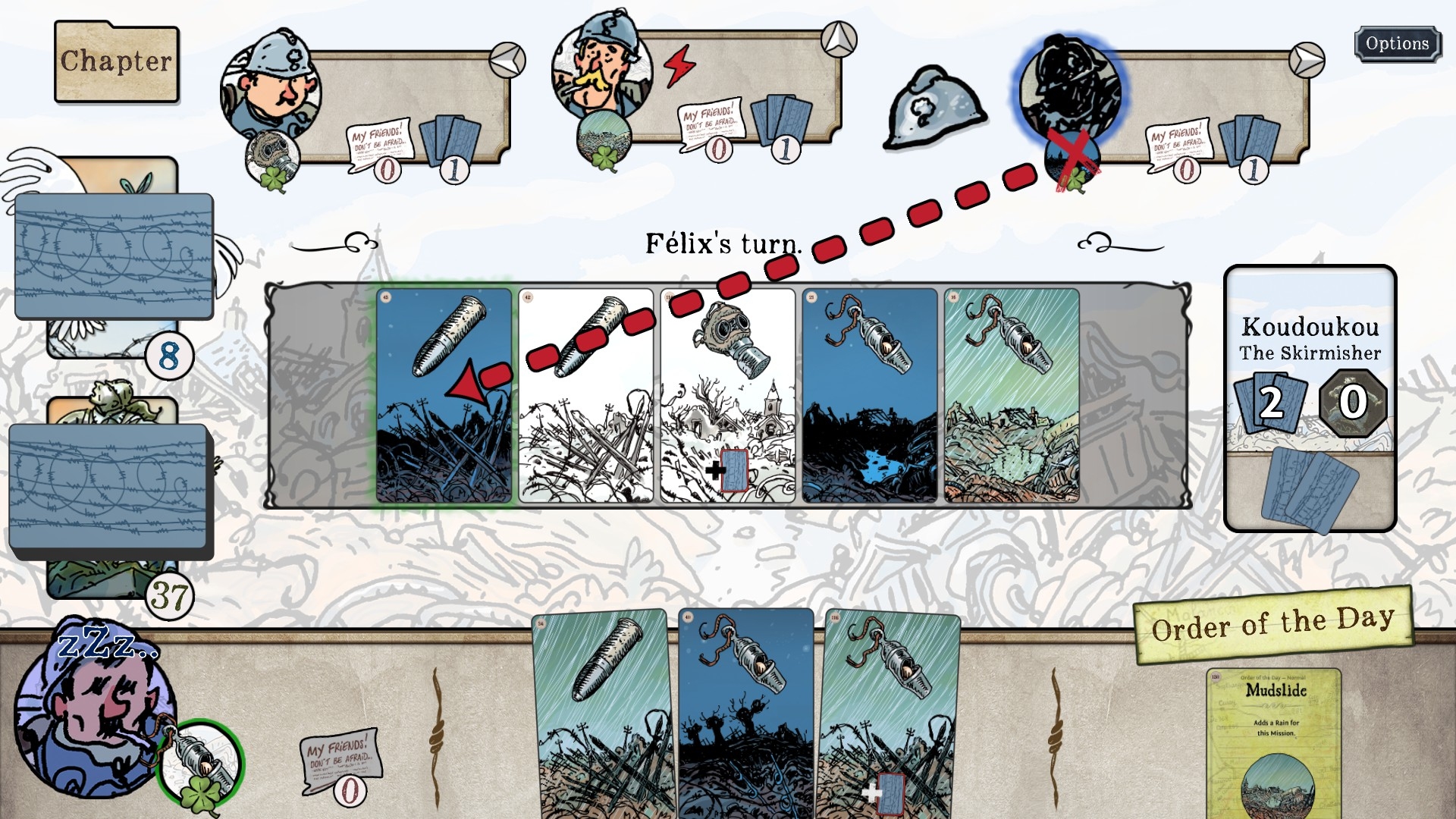 The £5 computer version of The Grizzled: Armistice Edition has just filled my morning with hope and despair, worry and relief, atmosphere and history, and impressively it performed this magic trick without dice, hexagons, or reams of rules. 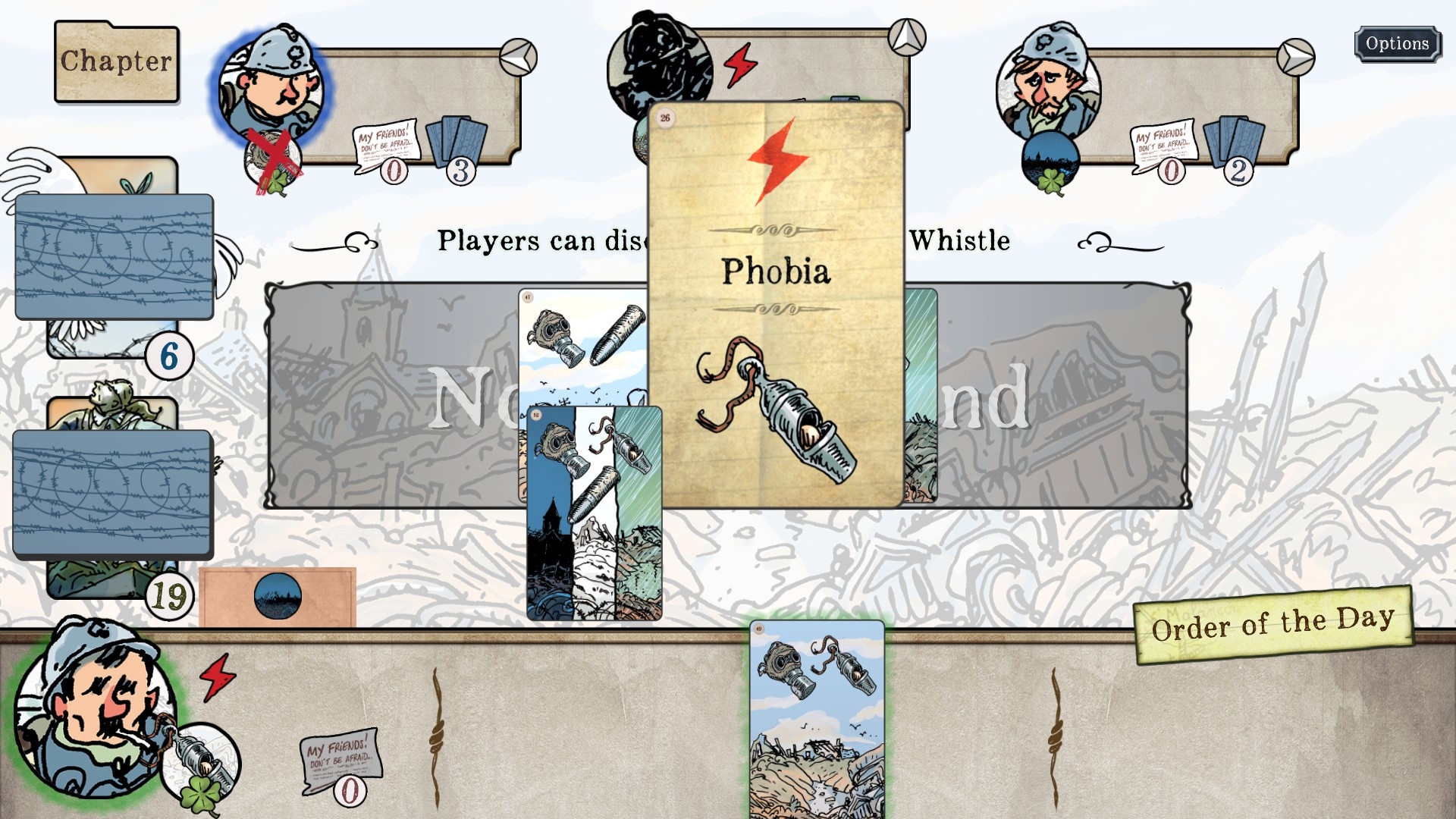 Updated and expanded in 2018, Fabien Riffaud and Juan Rodriguez’s thought-provoking guerre game is all about surviving the trials of war and helping your mates, rather than slaying enemies and winning battles. Most of the cards sport art* representing one or more of six suit-style ‘trials’ – shells, whistles (attacks), gasmasks (gas), night, snow, and rain/mud. There are also ‘hard knocks’ – psychological consequences of combat that linger once played.

* The Blake-reminiscent illustrations are the work of Tignous, one of the people murdered during the Charlie Hebdo shooting

In essence, every in-game day, each player is dealt a hand from the trials deck and must endeavour to play as many of these cards as possible into ‘no man’s land’ before withdrawing from the action. Withdrawing with numerous cards still in your hand is almost as undesirable as failing that day’s abstract mission (overloading no-man’s land with three of a particular trial type triggers mission failure) because unplayed cards stay in your hand and impact the number of cards that are removed from the morale deck and added to the trials deck before the next day’s action. If the morale deck is exhausted before the trials deck, it’s game over. 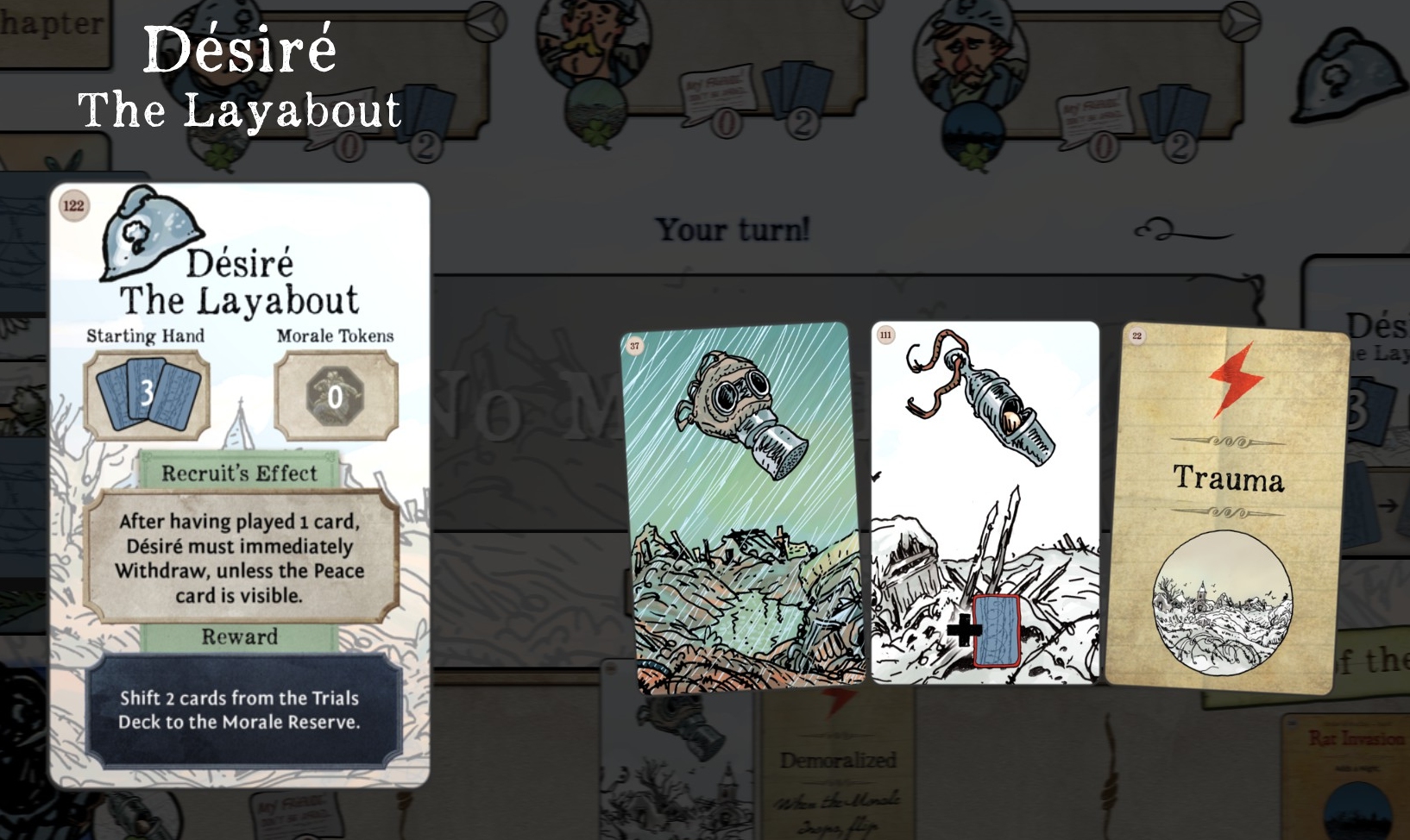 Secretly assigned support tokens that restore struggling soldiers between missions, daily orders that impact mission failure thresholds, ‘traps’ that throw random cards into no man’s land, speeches that can help your comrades shed cards, lucky charms that remove already played cards, needy recruits that must be chaperoned during battles… a wealth of other nuances add additional flavour and challenge to the elegant core mechanic.

An embedded tutorial does its best to explain all of this, but around thirty minutes into my test-drive, realising I was a tad lost (a few tooltips wouldn’t have gone amiss), I sought – and obtained (see above) – excellent rules clarification from YouTube. Five hours in, all vestiges of bafflement have vanished, leaving me free to savour the light-touch procedural storytelling and succession of tricky decisions. 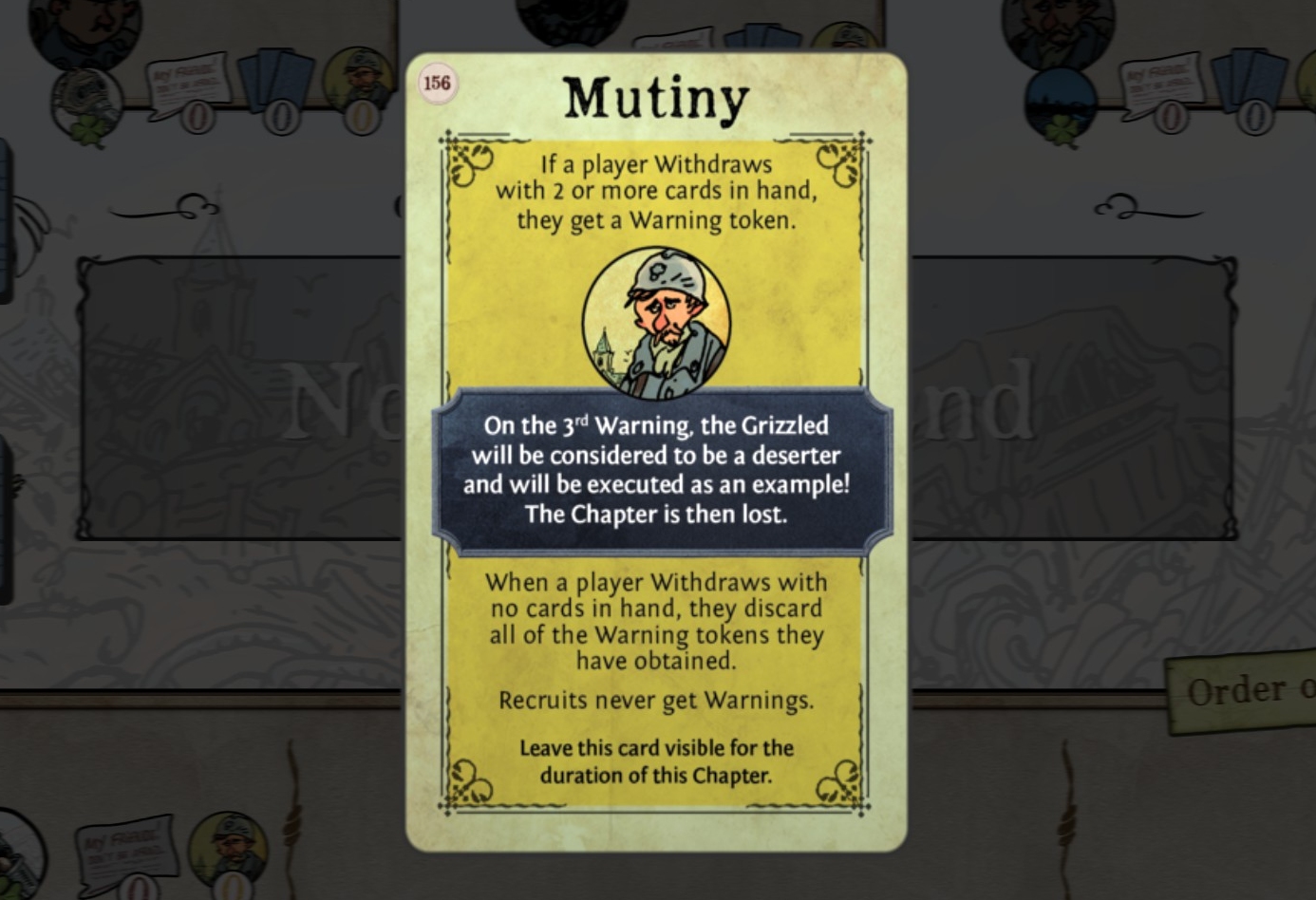 One-off games can be played at three difficulty levels, and with complications such as traps and recruits deactivated. The five chapter campaign is less customisable, but mixes in additional elements over time, so shouldn’t overwhelm players with a few one-off games behind them. It’s impossible not to admire the clever way the campaign mode takes historical events like the appearance of gas, the 1917 mutinies, and the Russian armistice, and translates them into transformative short-term play modifiers. 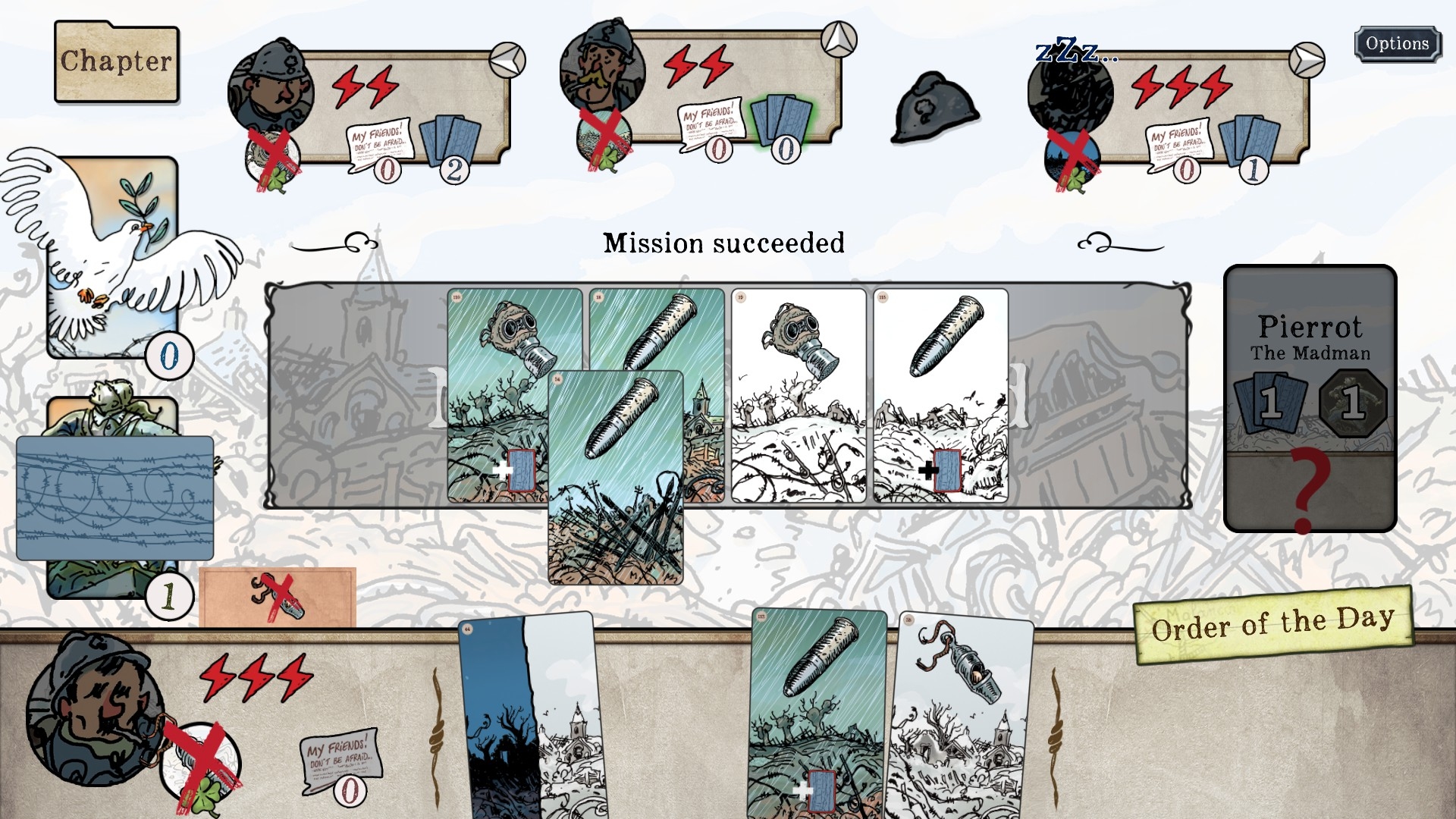 AI comrades that squandered lucky charms and speeches, or wasted their support tokens on the unscathed, would have seriously qualified my enthusiasm for this port. Fortunately, Gaston, Gustave, Felix etc, seem to play very humanly, so those who don’t wish to take advantage of multiplayer don’t have to. Limited replayability would also have cooled my ardour, but there’s little danger of that with every day at the front shaped by the myriad permutations of a thoroughly shuffled 59-card deck. 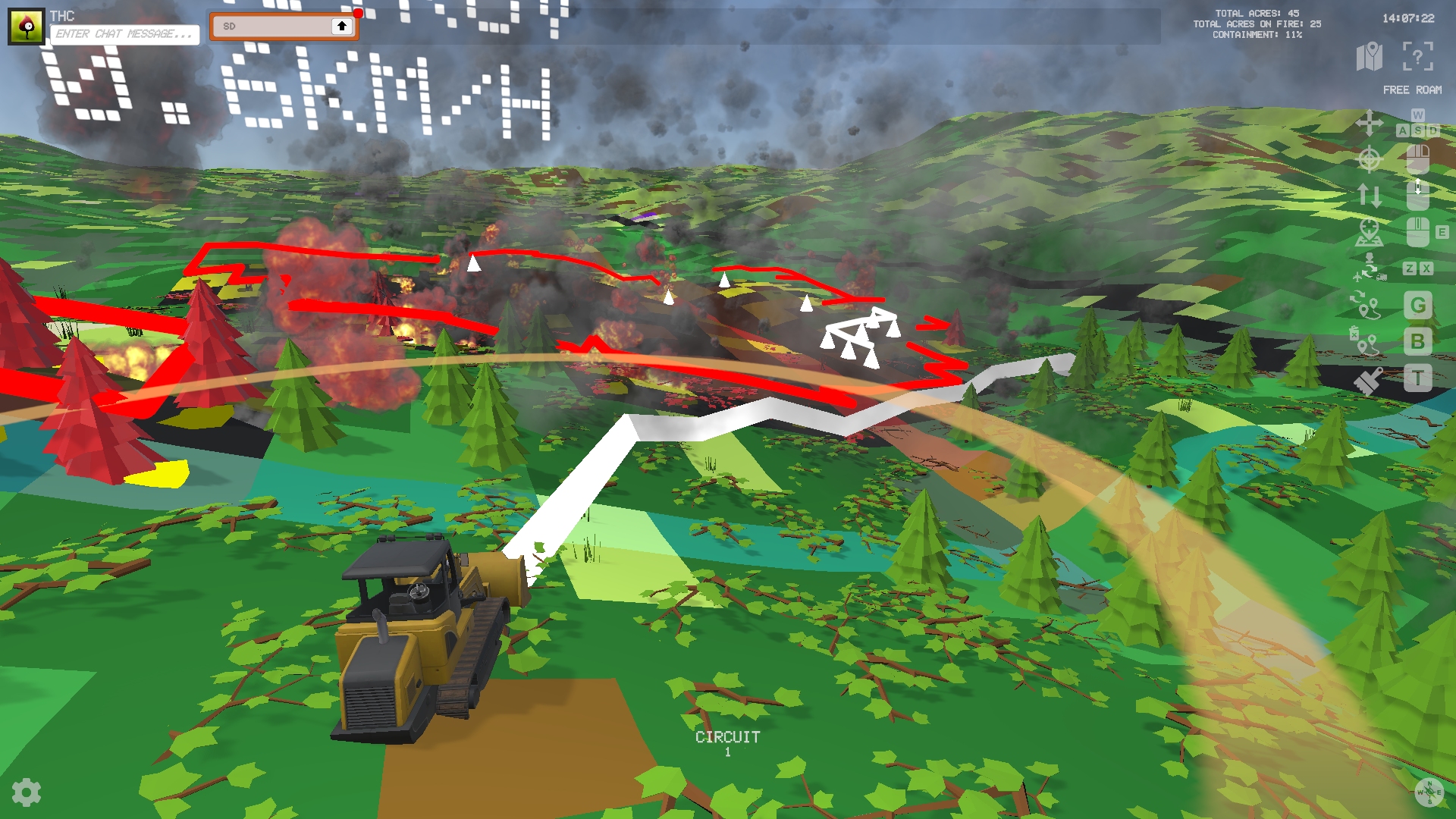 Due to an activation glitch, the third of this week’s play reports is based on three hours with a demo rather than three hours with a complete game. The FireJumpers Inferno trial lets you wargame wildfires anywhere in the contiguous USA. The snag is the blaze location can never be larger than 7km x 7km, the selection of firefighting assets is pretty meagre, and you’ve limited control over weather customisation and time acceleration. Removing these restrictions via the ‘Full Version Unlock’ costs £19. 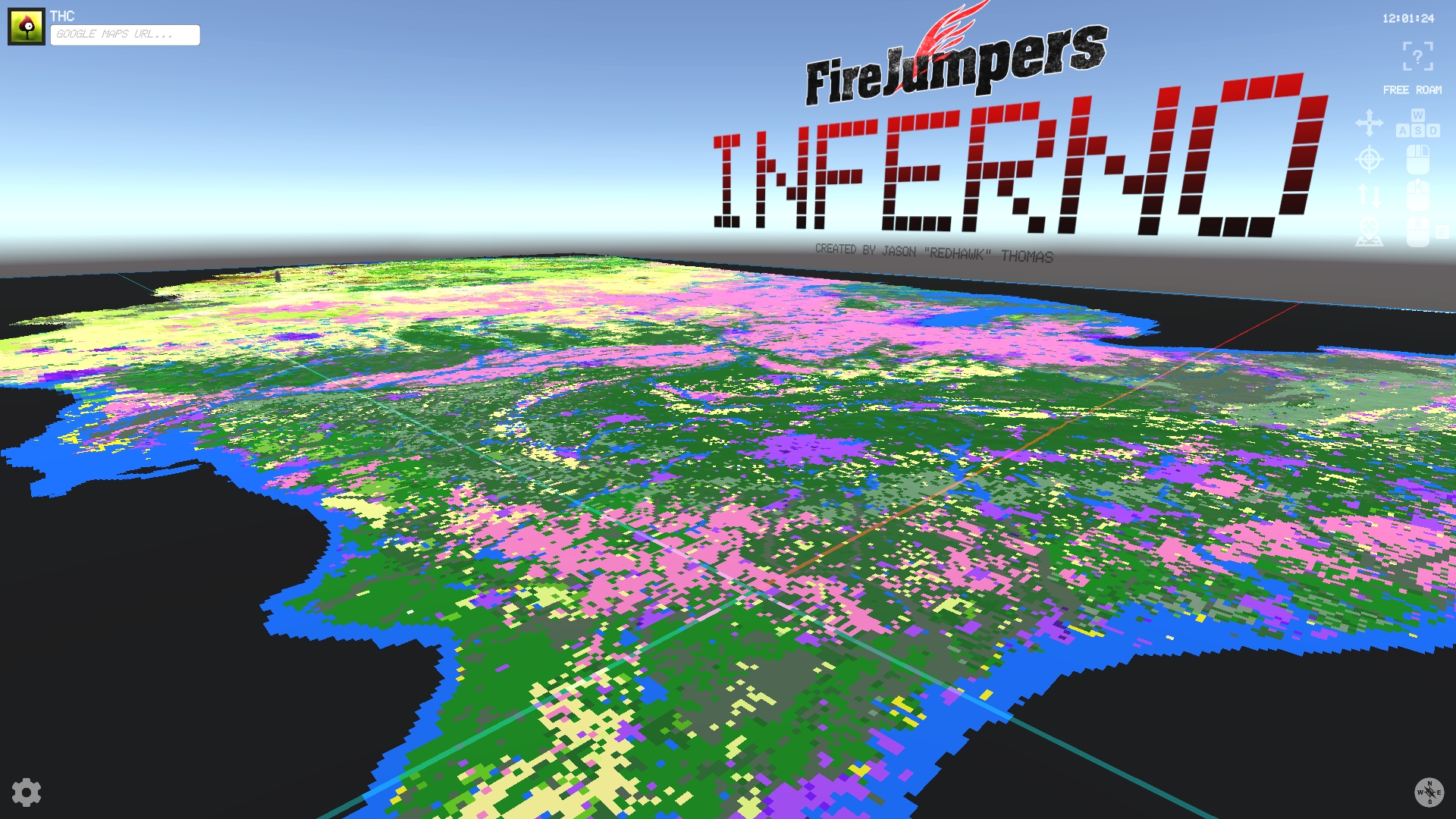 Whether you’ve purchased or not, on launch the game greets you with a spectacular pixelated 3D representation of the USA in which every pixel represents a square plot of 15000 30m x 30m terrain tiles. Once a block of four or more pixels have been selected and a swift GIS data download has finished, an appropriate colour-coded landscape replaces the US map.

Fires can be started anywhere in this play area with a couple of mouse clicks, and will spread realistically, factors like weather, terrain type, slope, and fuel availability determining speed and direction. 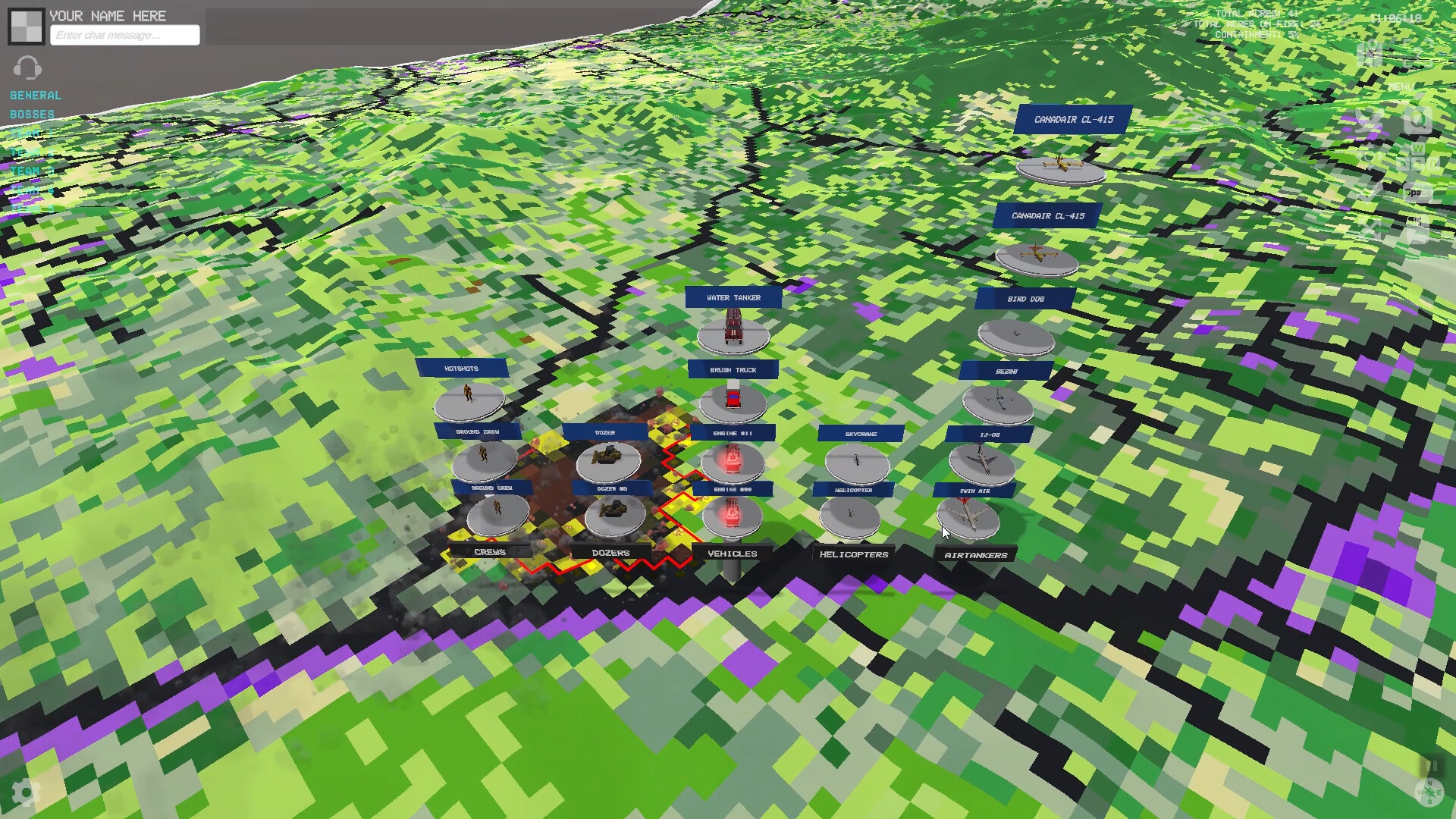 Once you’ve commited arson, how you go about rectifying matters is entirely up to you. In the demo you can get your teams to bulldoze and chainsaw firebreaks, and douse flames with fire engines and whirlybirds. The full version seriously enlarges the range of aerial assets, as well as adding vehicles like water tankers, and specialists such as hotshots.

As there are no canned missions in FJI, and units are free, indestructable, and can be spawned anywhere, the onus is on the player to self-regulate challenge. Feeling brave? Combine strong winds, dry conditions, rough terrain, and scant water sources with a ‘New assets can only be spawned on road or urban tiles’ house rule. Still wet behind the ears? Drag the wind speed slider all the way to the left, and kindle your conflagration in a spot naturally hemmed by a road or river. 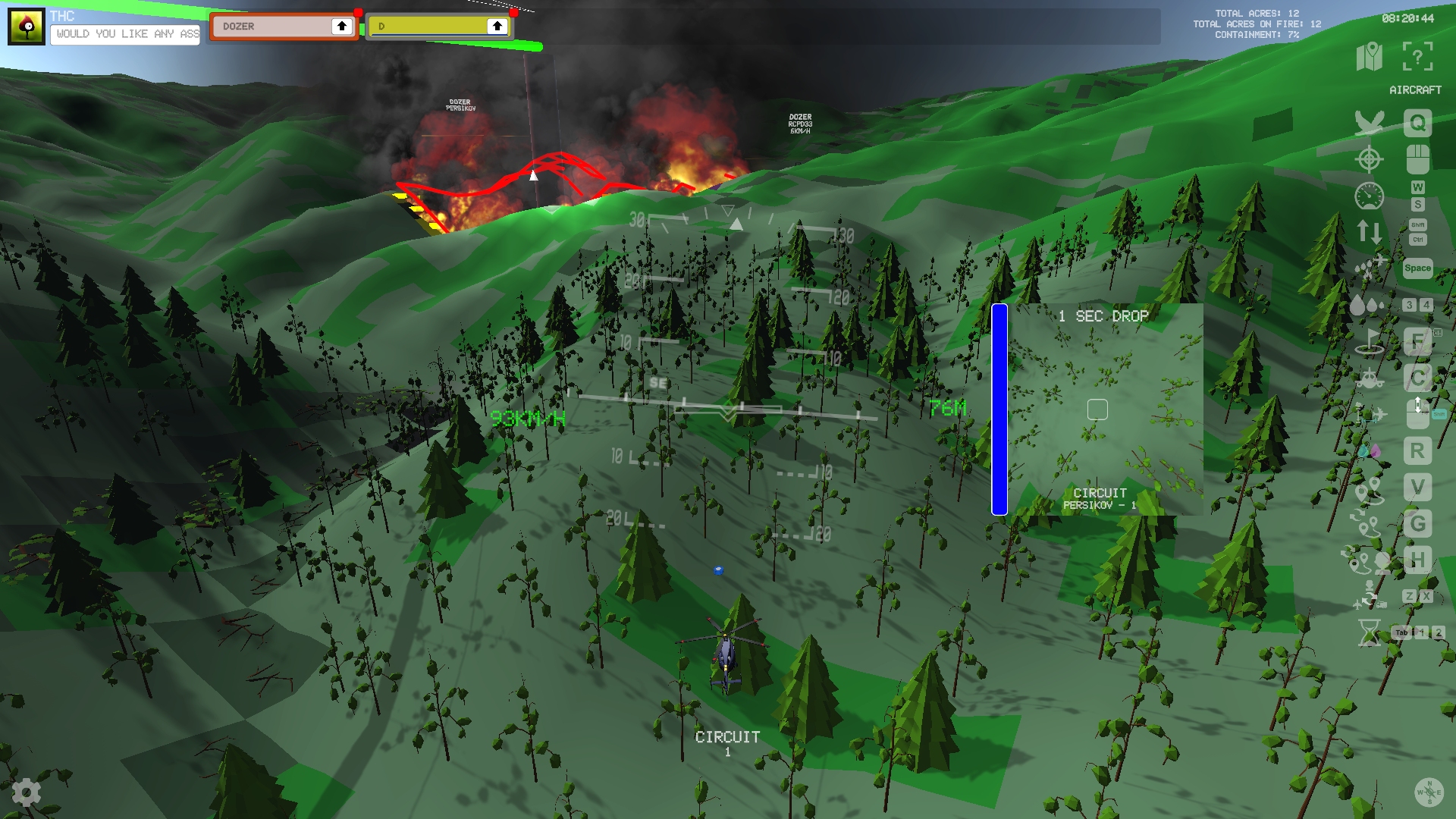 Although my activation issue means I’ve yet to mouse-fly fixed-wing water bombers like the Canadair CL-415, last night I fought a blaze alongside a player who was employing one. Fires started by other users appear on the title screen map and can be joined by anyone who fancies a spot of co-op. It’s a pleasantly fuss-free approach to multiplayer, but probably needs to be augmented with a password option for those who desire privacy. 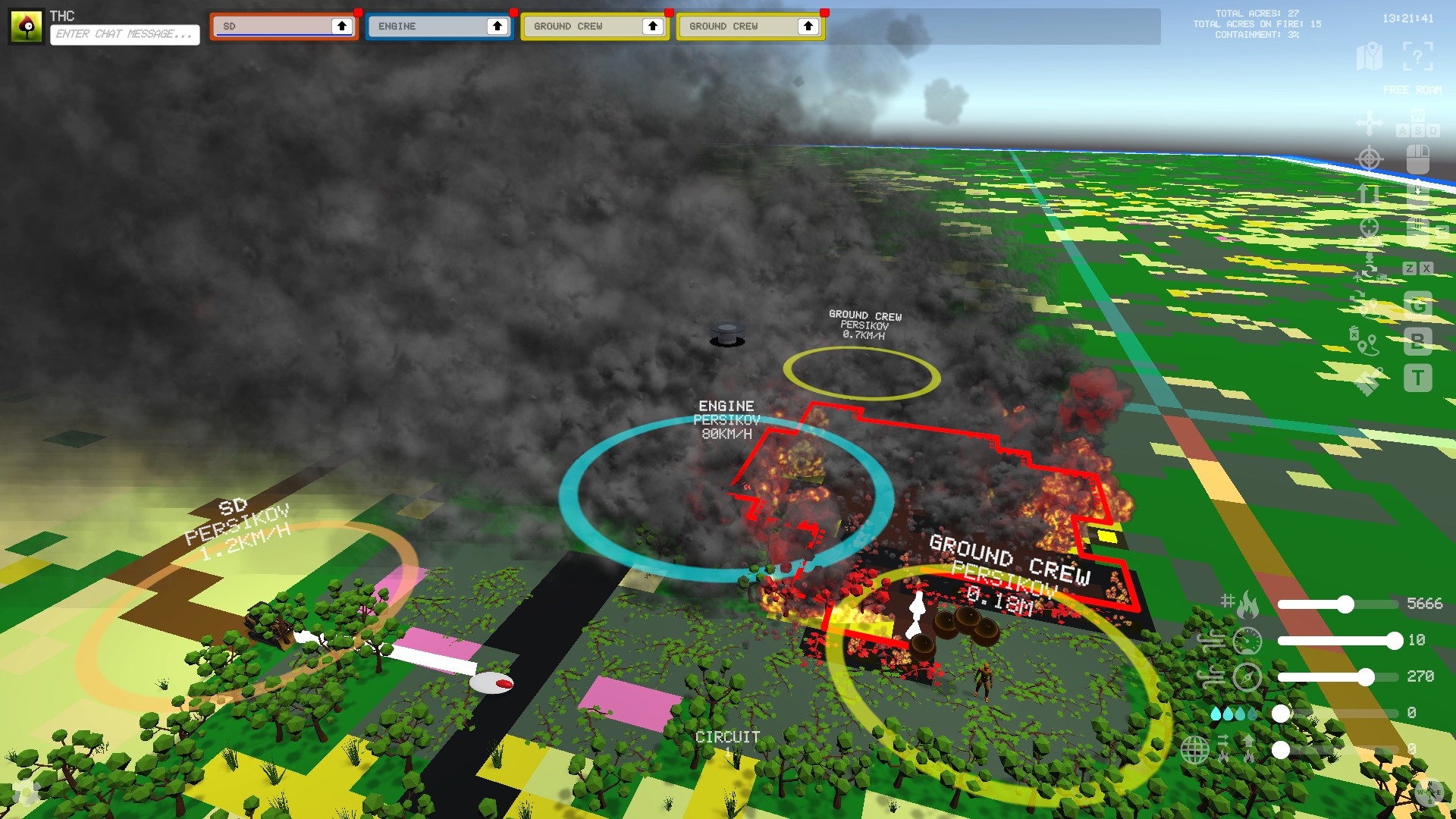 Along with passworded MP, FJI urgently needs a good interactive tutorial and overhauled aircraft controls. At present the game’s UI is both disconcertingly unconventional and poorly explained. For example, try to move ground units with a simple left or right click and you’ll get nowhere. Paths must be painstakingly painted onto terrain avoiding impassable tiles. 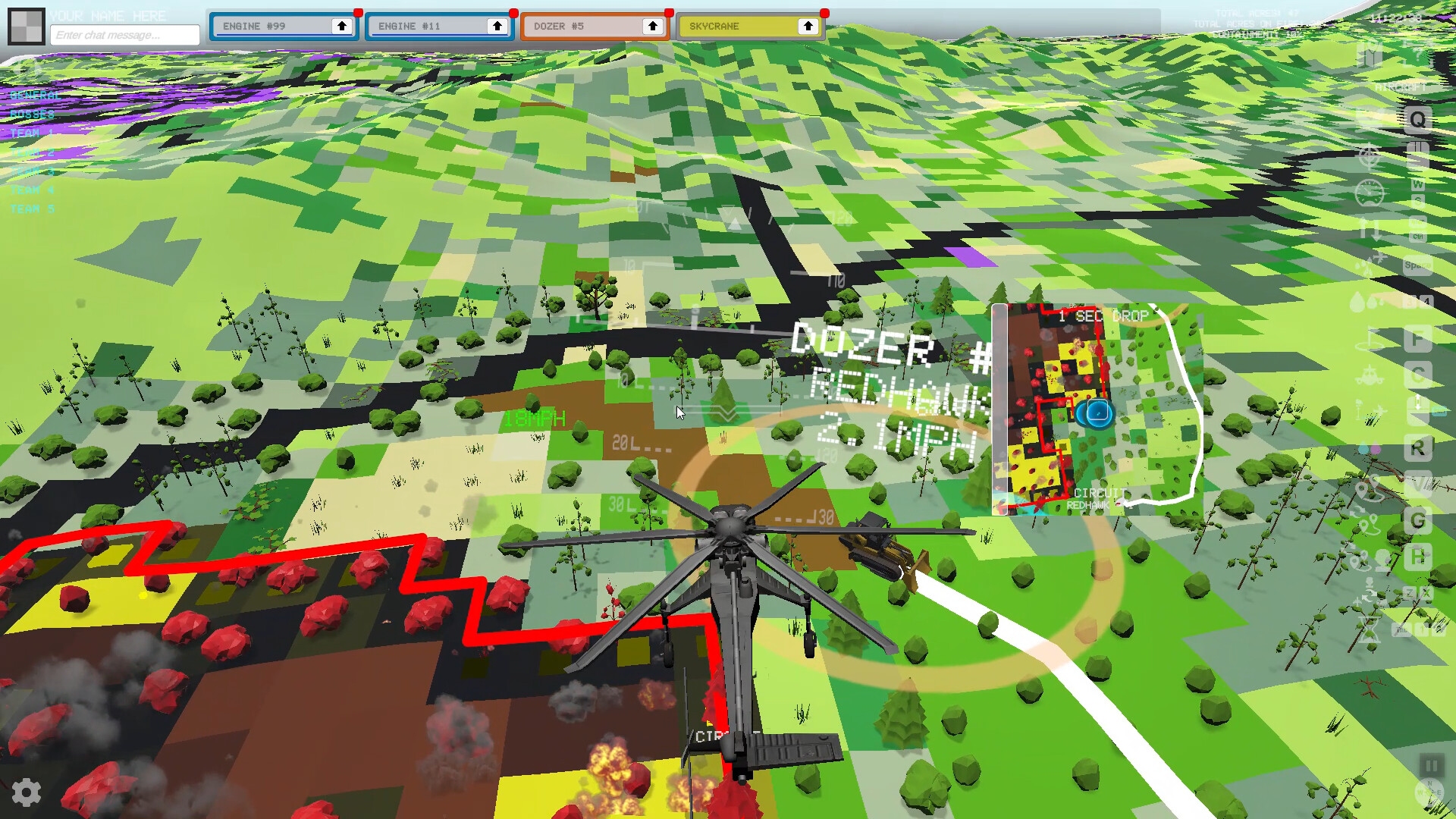 Controlling helicopters in first and third-person view is tricky thanks to quirky controls. This would matter less if the waypoint system that allowed aircraft to firefight independently was easier to grasp. 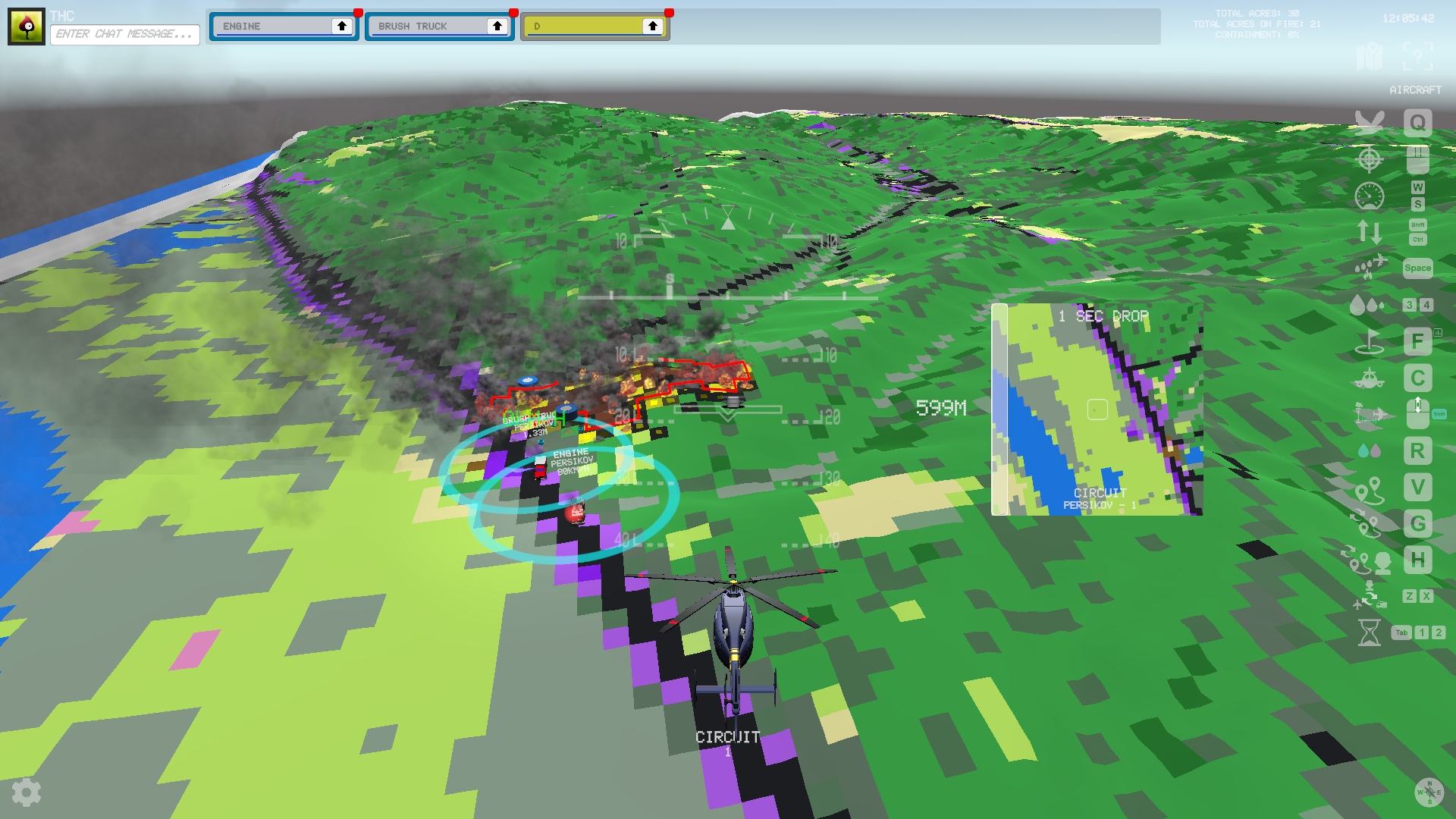 Although fascinated by its theme, and impressed by its geographical scope and simulatory sophistication, I can’t help wishing FireJumpers Inferno operated more like a traditional RTS. I want units that do their own pathfinding. I’d like a configurable random ‘skirmish’ generator, maybe even a campaign. Are improvements like these a realistic possibility? Only one person can answer that question with any authority, and hopefully that person – Jason ‘Redhawk’ Thomas – will shed some light on the matter in the next A2Z interview.