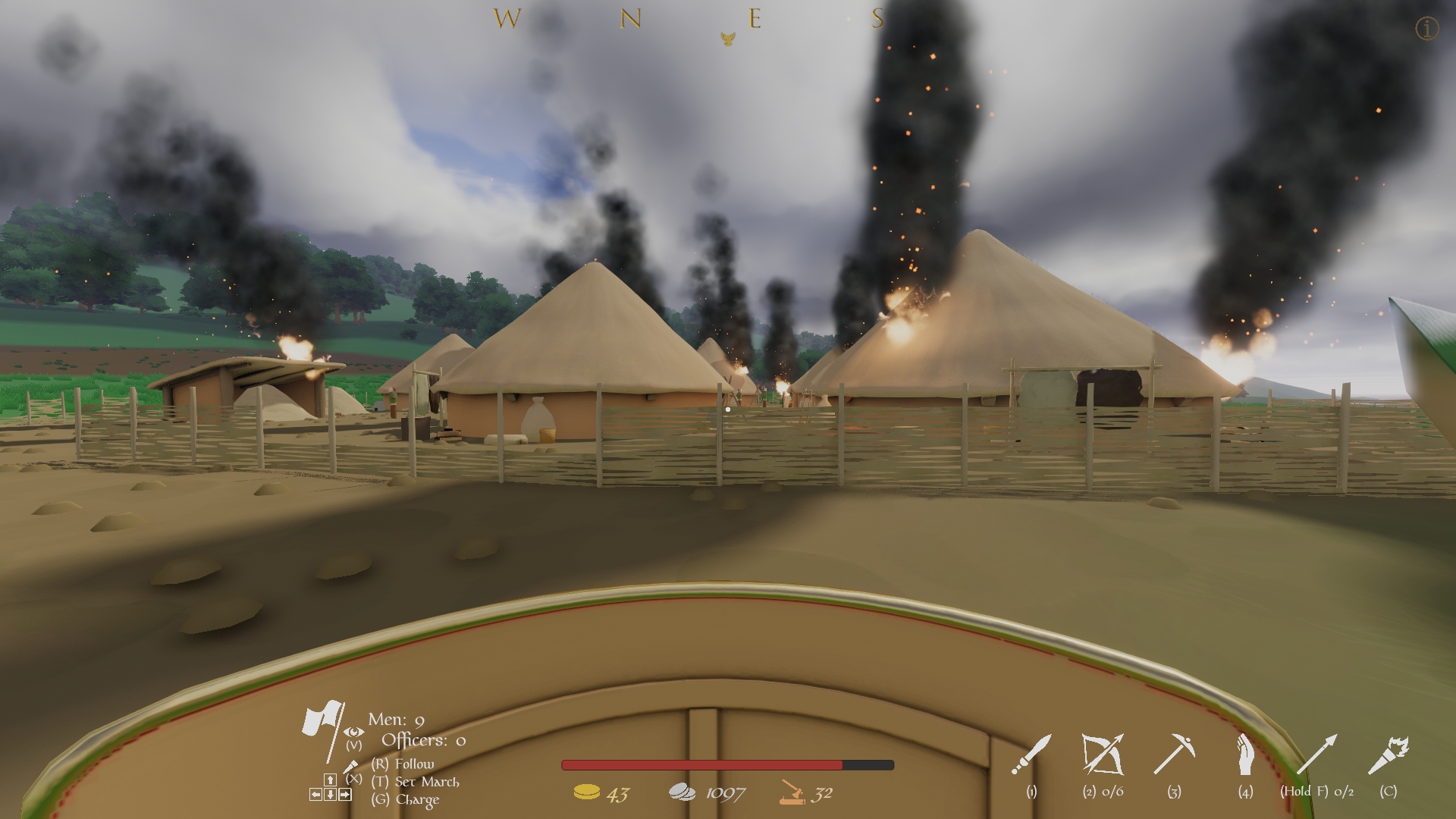 You’re never very far from an Iron Age hillfort in Wales and southern England. As THC HQ is within strolling distance of several, it’s hardly surprising I occasionally find myself picturing ludological treatments of the event that demonstrated their deficiencies as defensive structures. In the diversions I daydream I’m generally the hillfort designer/defender rather than the hillfort reducer – the role you (eventually) play in £15 Warlord: Britannia.

Because the hillforts in the Mount & Blade-reminiscent WB are all situated in the north of the 45 square kilometre campaign map, I haven’t actually laid eyes on one yet. All the settlements I’ve conquered thus far have been hurdle-ringed clusters of roundhouses near my camp on the map’s southern fringe. 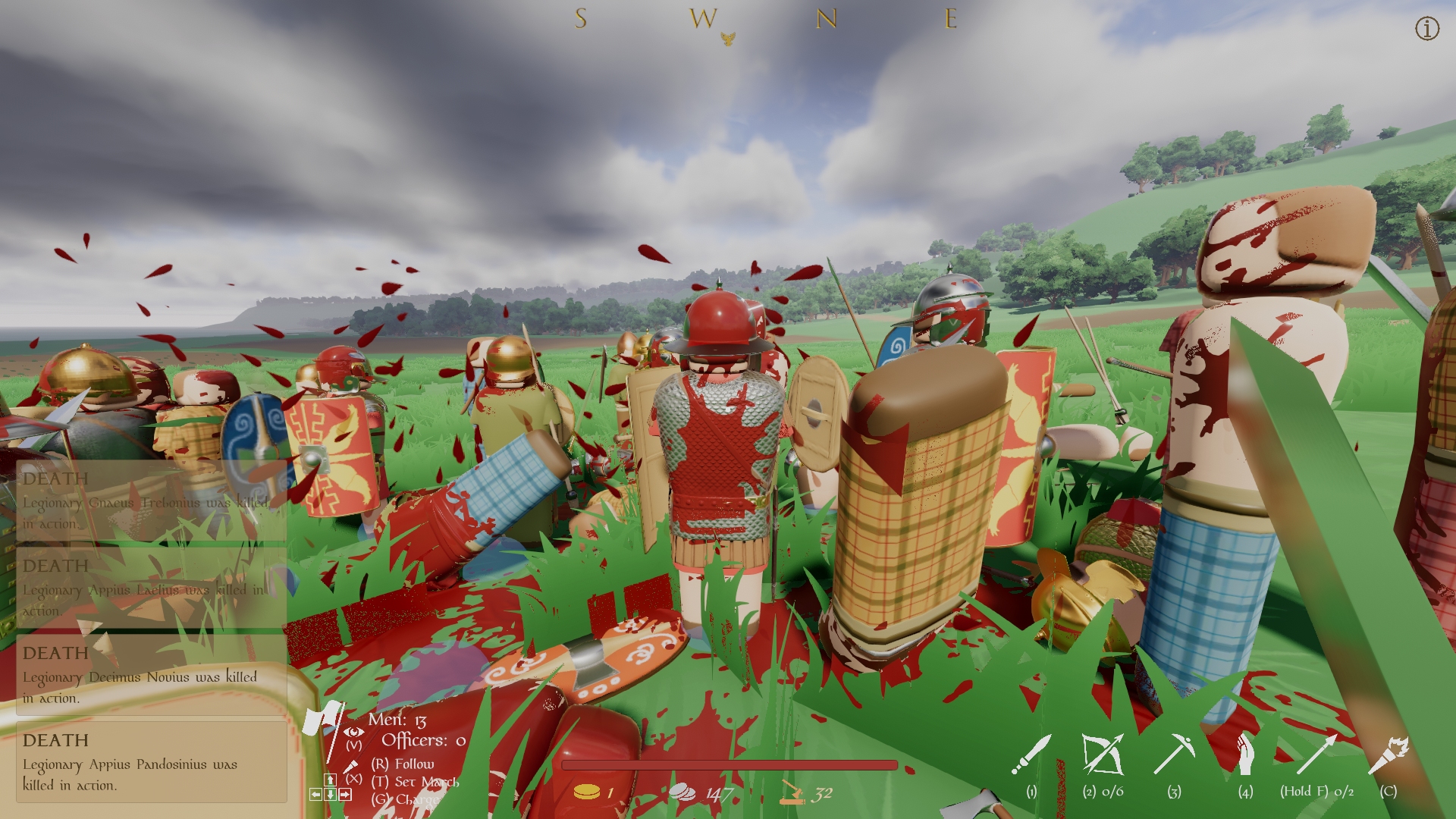 Wholly reliant on small gangs of angry sword, spear, axe, and sling wielders for protection, these early-game prizes would stand little chance against a historical Roman invasion force, but as you land on British shores with just a handful of soldiers and must grow your army RTS fashion, quick, painless victories can’t be taken for granted. 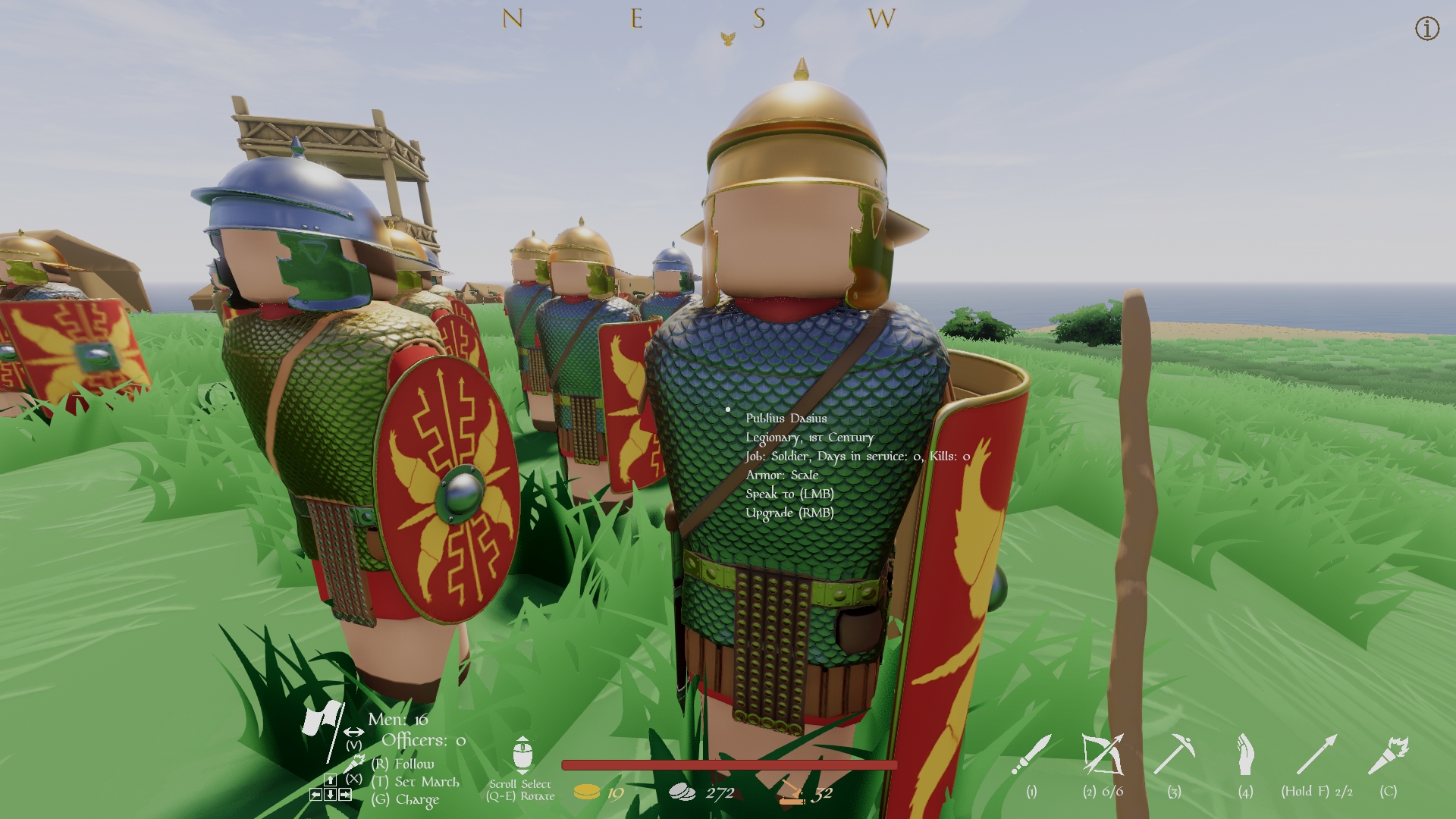 Recruiting, outfitting, accommodating, and paying a WB army requires cash – cash you can only obtain by taxing or terrorising the natives. In a cobnutshell, you march your men to a nearby settlement, kick the ordure out of the populace (if you can), then decide whether you’re going to pillage the place and enslave some or all of the residents, or let them off lightly in return for regular tax payments. Treating the defeated harshly swells your coffers speedily, but, as I discovered earlier today, has potentially disastrous ‘unrest’ implications. My first game ended around three hours after it began when an army of enraged Britons descended on my ramshackle camp while I was away intercepting a convoy (in addition to taking settlements you can also gain funds by attacking dynamically generated inter-settlement traffic). Even if my entire century* of legionaries had been at home when the locals called, I doubt we could have stopped them. Next time I play I’ll be sure to put more thought and effort into palisade construction and guard deployment. 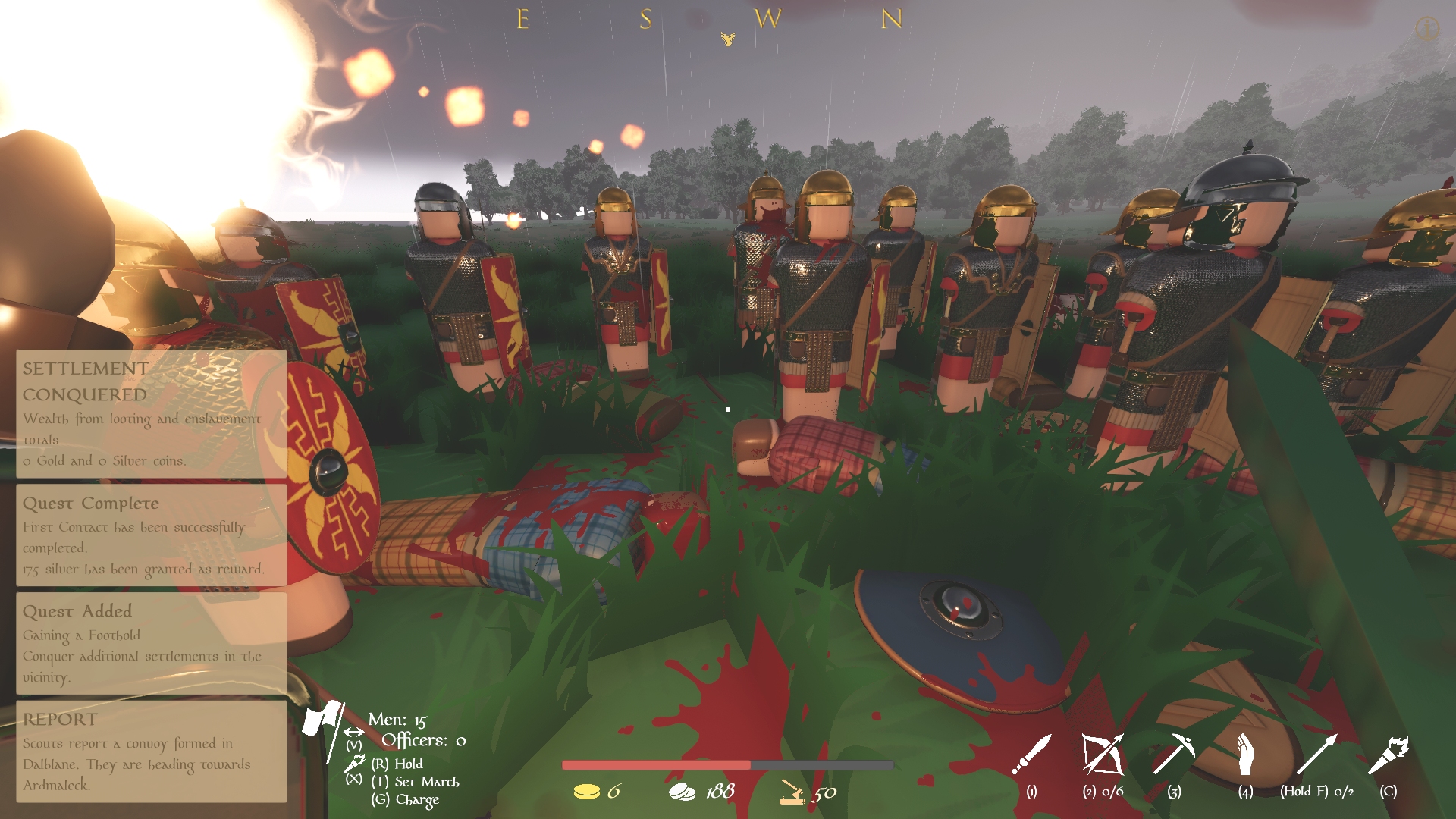 Considering warriors are represented by giant faceless clothes pegs and environmental textures are rare, WB is surprisingly atmospheric at times. Yes, tactical controls feel a tad primitive (I’d like to see more formations and unit stances) as do the melee mechanics (buttonmash like your life depends on it – which it often does) but as first-person wargames with sandbox campaigns, personalised/promotable troops, and unusual settings arent exactly common, my first few hours with Warlord: Britannia are unlikely to be my last. 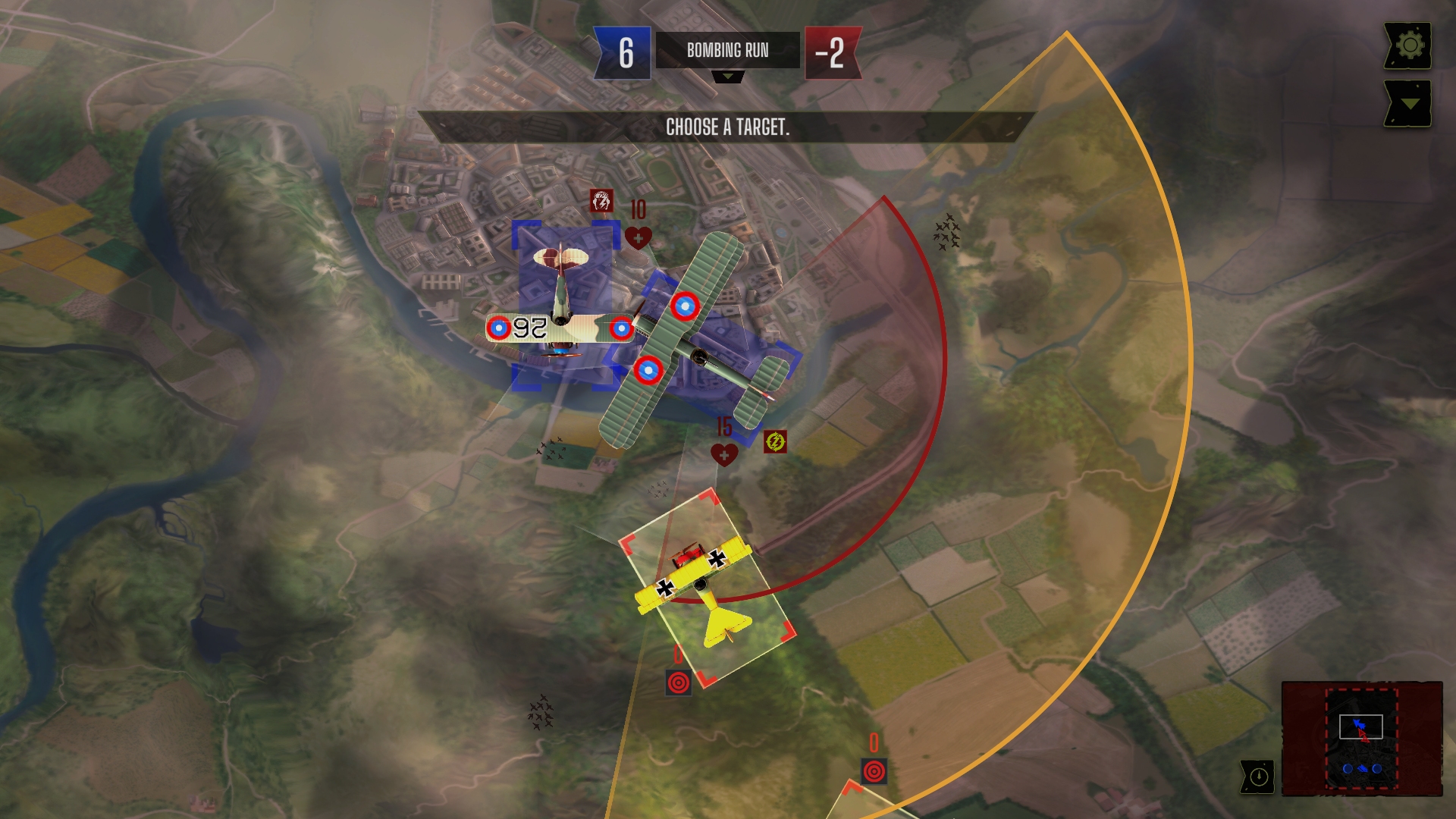 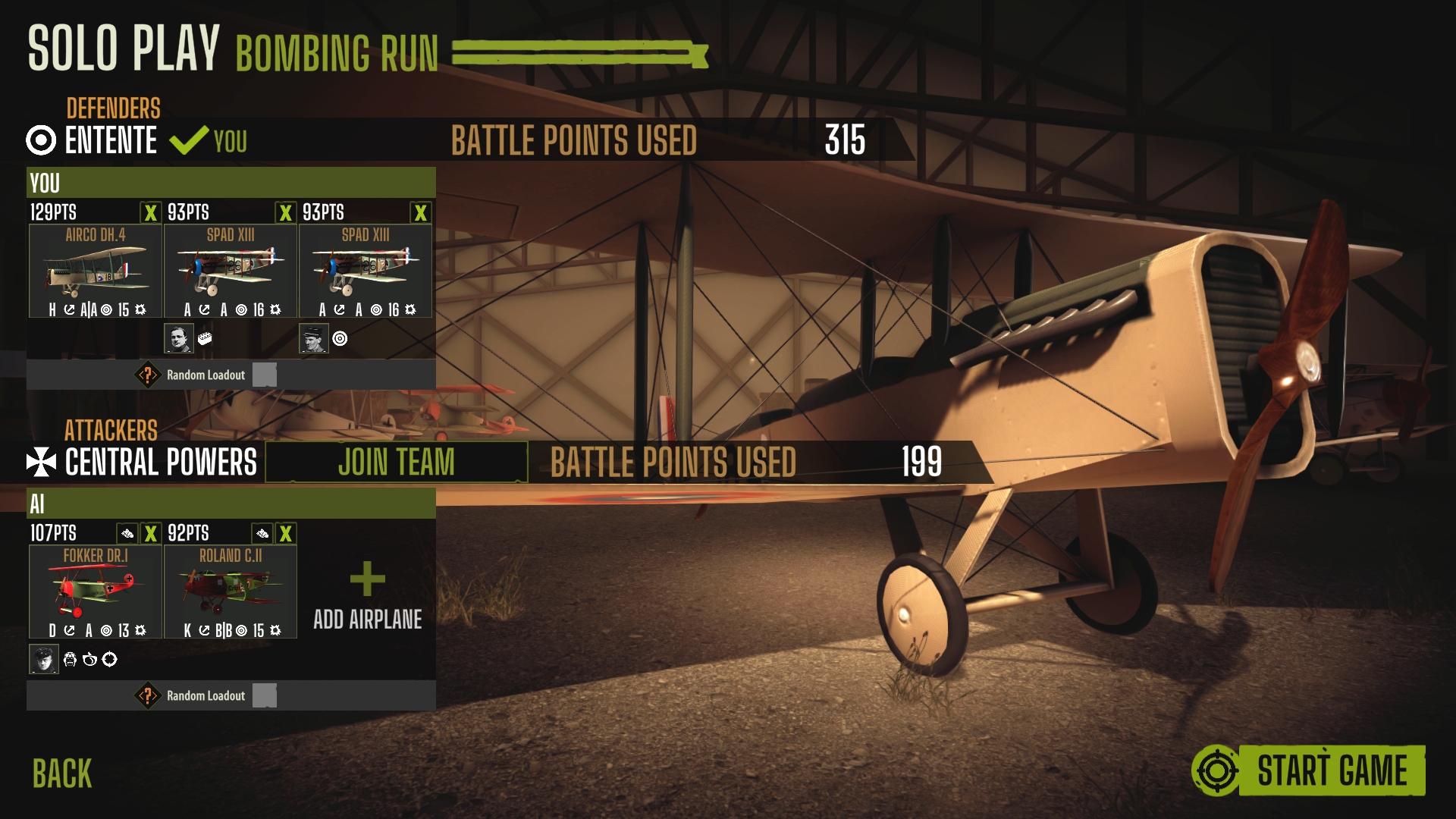 Right now eleven quid buys you eight different aircraft types and competent AI. You get three tutorials, six simple solo missions, online multiplayer, and a skirmish generator capable of hatching dogfights, and recon, bombing, and strafing sorties involving up to six biplanes. To customers willing to play £50 for a single Bloody Paralyser miniature, this probably feels like a pretty good deal. However, to those of us accustomed to scratching air warfare wargaming itches with the likes of Flight Commander 2, Achtung Spitfire, and Ace Patrol, it’s hardly an embarrassment of riches. 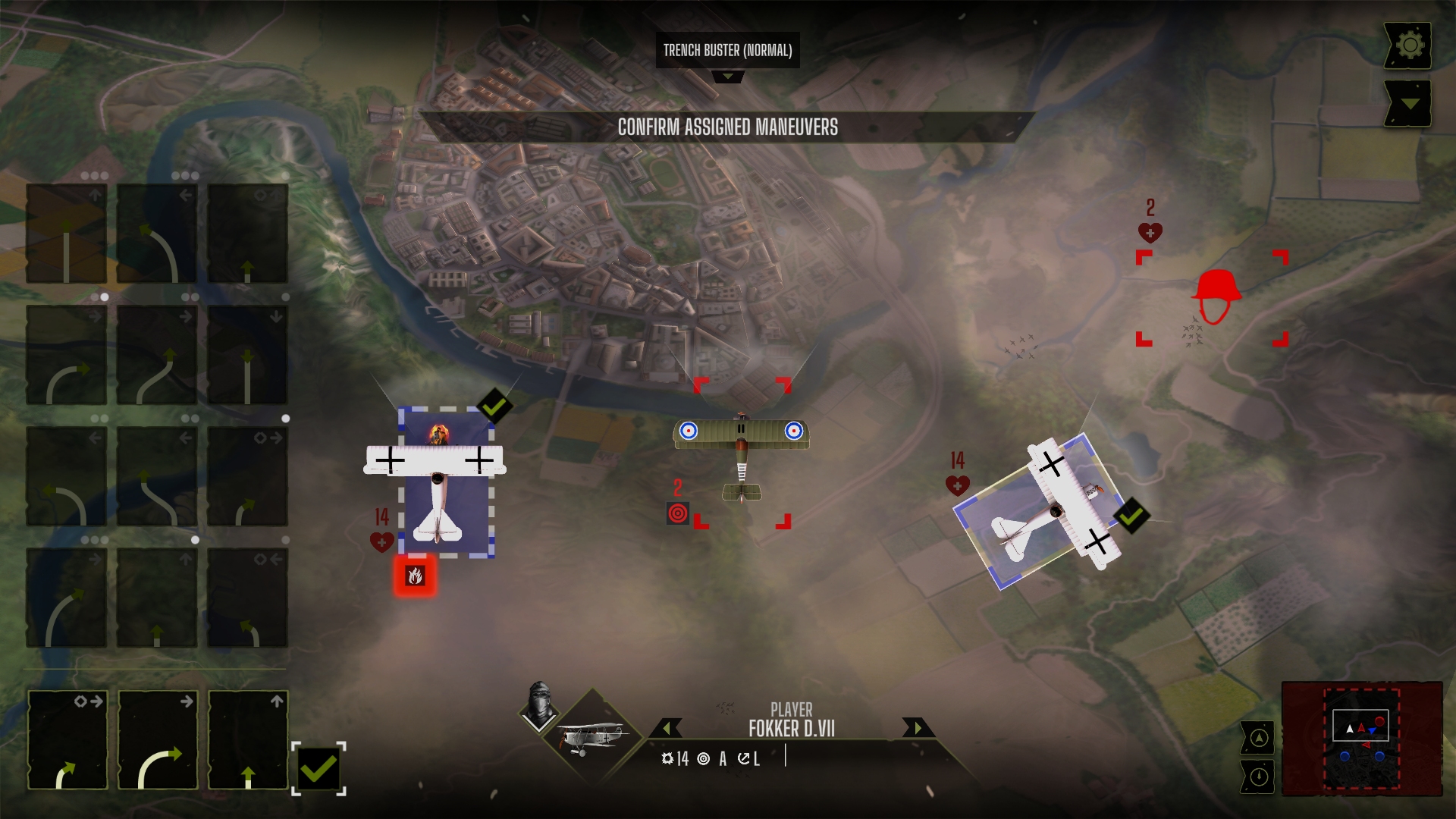 All furballs take place in the same cramped* and cloudless rectangular arena and are always viewed from directly overhead. We don’t even get to watch stricken kites plunge to earth in eye-catching ways. The same scripted cutscene plays every time an aircraft loses its last hitpoint or takes a critical hit.

*The SPAD and Camel can fly the length of the arena in under two turns!

While digital WoG underwhelms at present, it has convinced me that I’d enjoy playing its analogue touchstone. The ingenious three-card manoeuvre system, the elegant approach to altitude, damage, and ace skills… I now understand why Andrea Angiolino and Pier Giorgio Paglia’s dice-free design is held in such high esteem, and why fans are willing to spend so much on its 1/144 scale accoutrements. 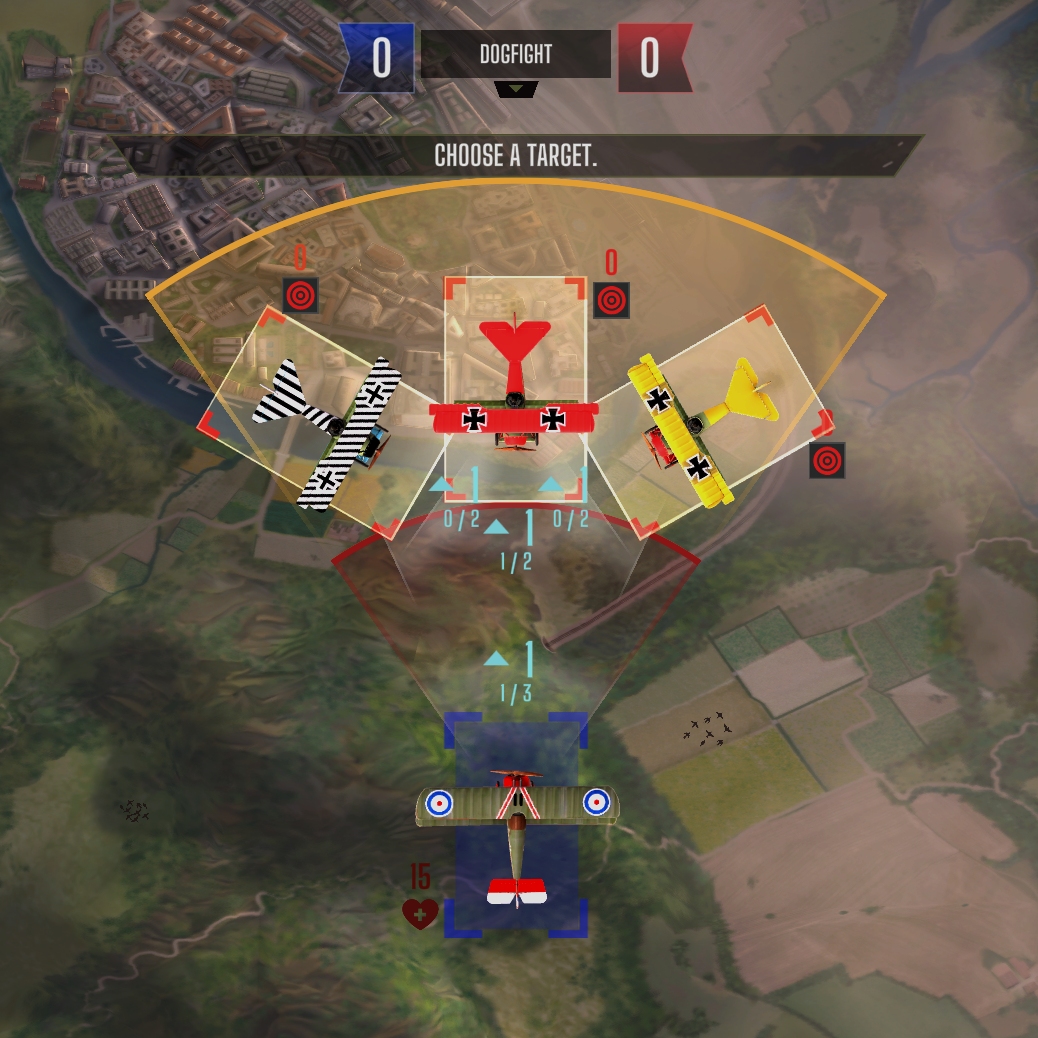 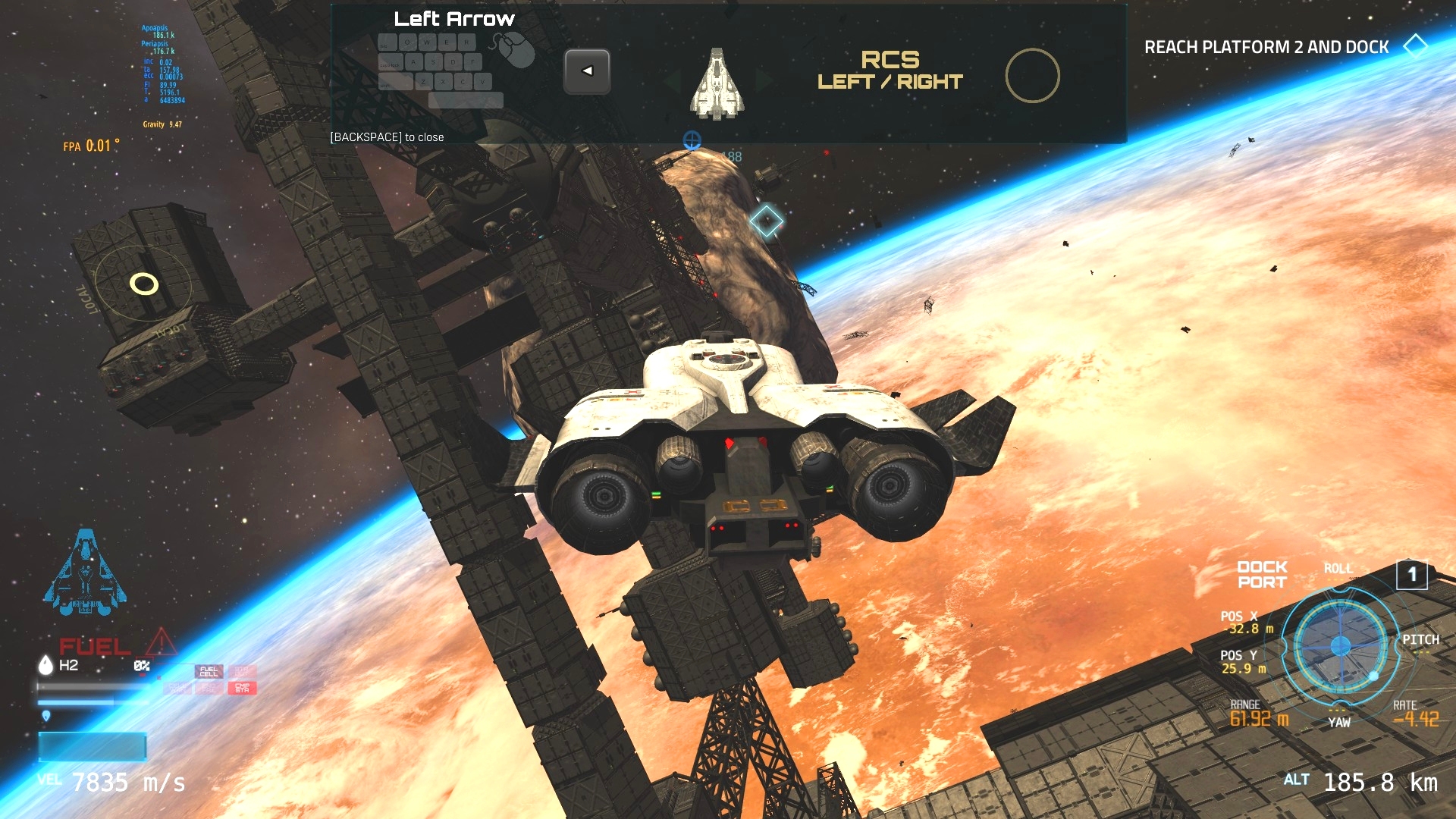 My favourite of this week’s trio was a substitute for a substitute. If Unity of Command 2: Desert Rats had cooperated with my antique OS, or Redside hadn’t alienated me with a tiresome drone level and some casual war crime denial, Aerovery Lab’s Early Access man-with-a-spacevan sim wouldn’t have appeared in this article. 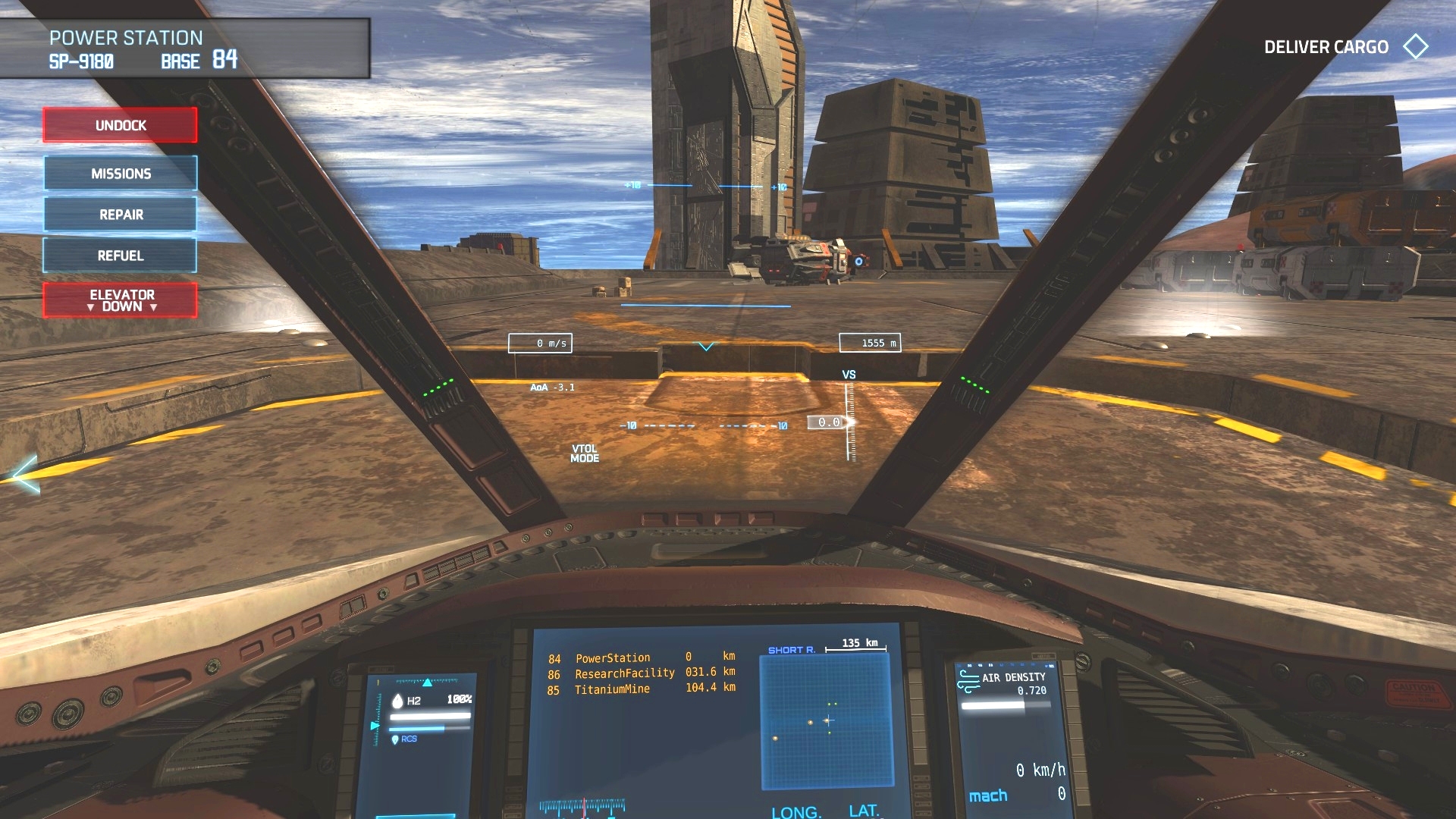 Although it lacks both a narrative and an economic dimension, and is set a very long way from Seattle, this £24 demo-endowed WIP puts me in mind of Bohemia Interactive’s Take On Helicopters. Switch flight mode from ‘cruise’ to ‘VTOL’, and the two ship types currently available have flight characteristics not dissimilar to terrestrial whirlybirds. 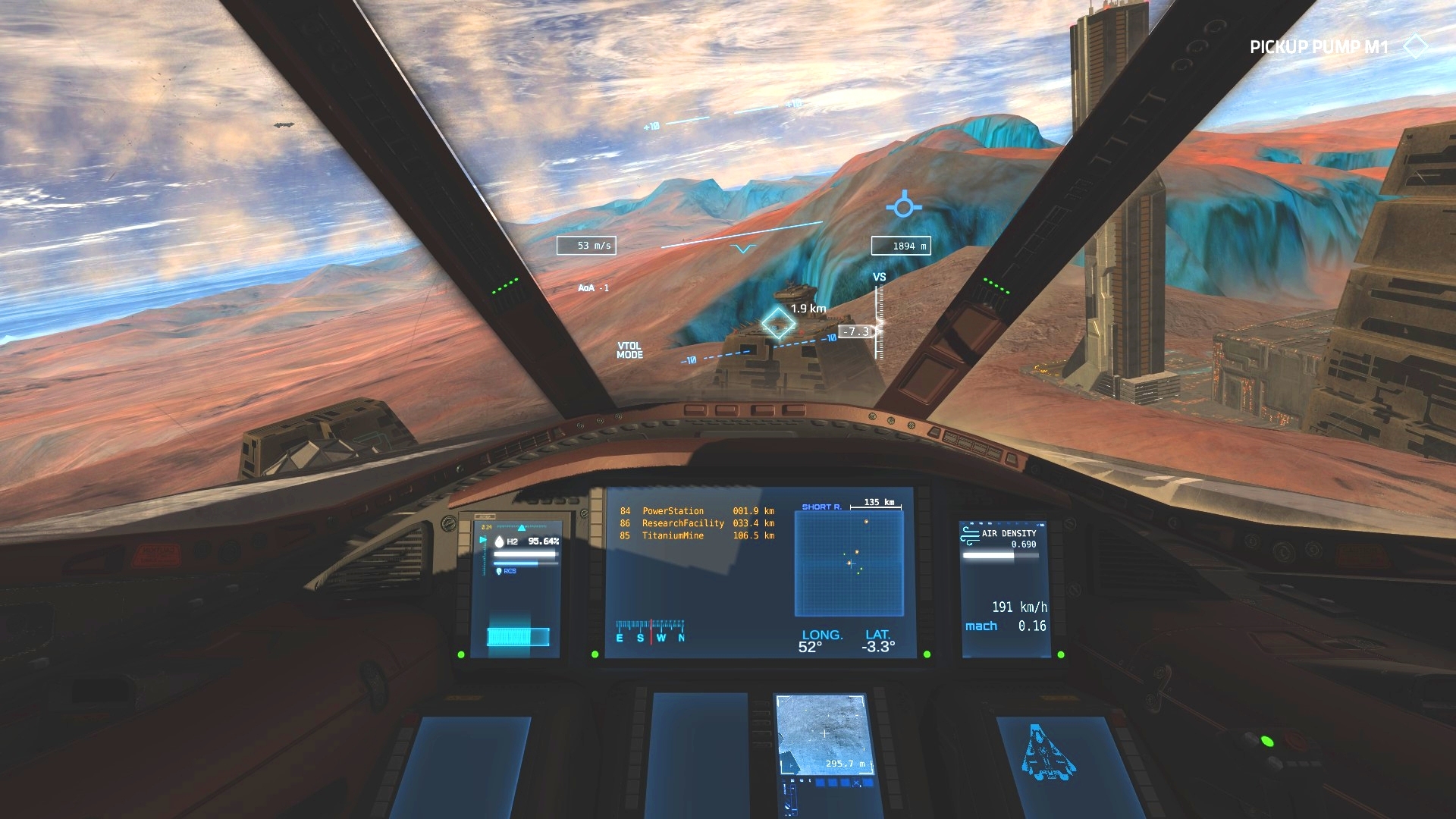 Alighting gently and neatly on the game’s modest selection of landing pads, takes concentration and a delicate touch, especially when those pads nestle in deep valleys, are adjacent to lofty structures, or are attached to restless space stations. 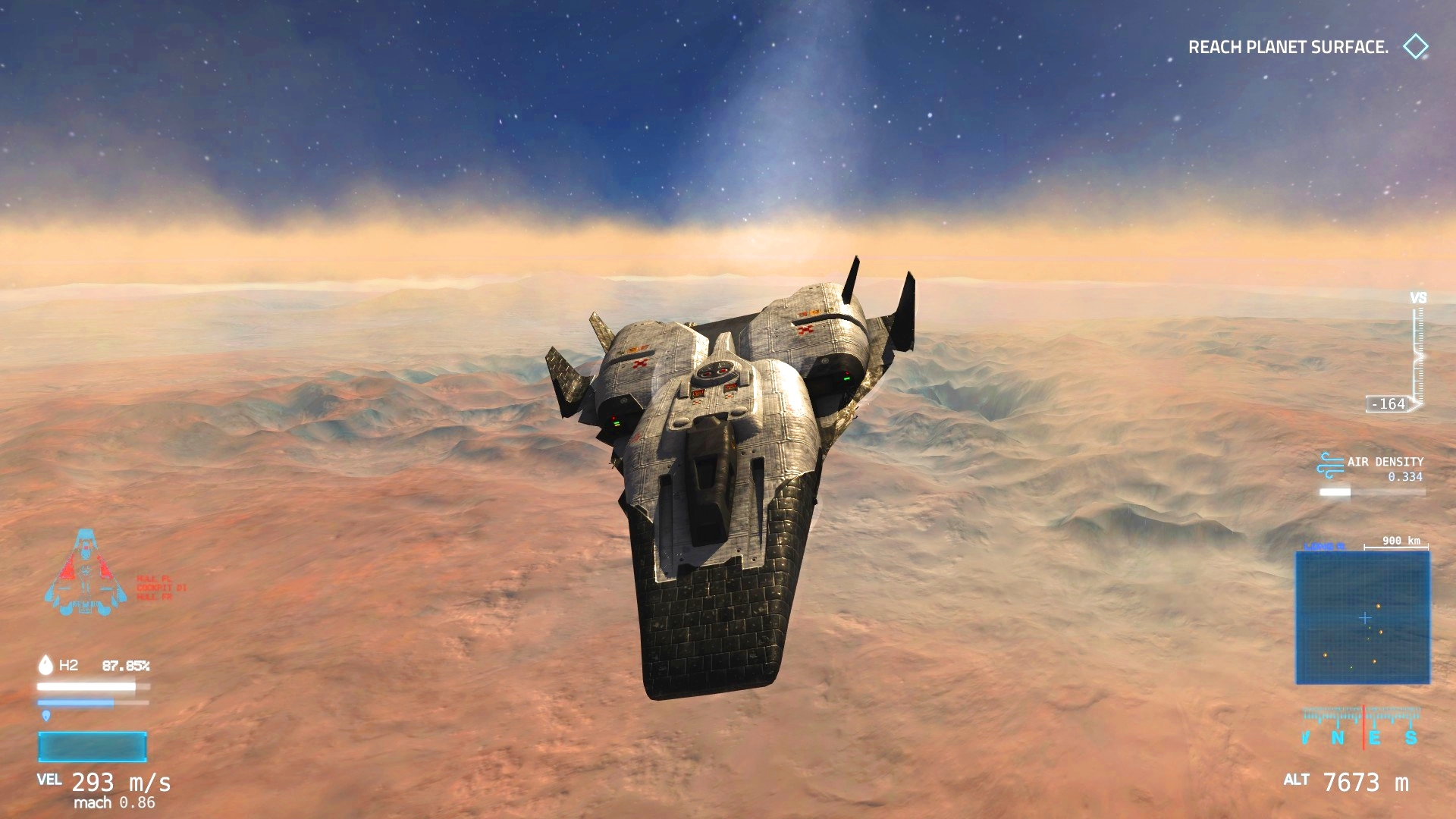 After trying and failing several times to complete a devilishly tricky, seriously 3D, docking tutorial (the other instructional missions were cakewalks in comparison) I turned my back on the sim’s wild black yonder and spectacular/risky re-entries, concentrating instead on aviation closer to the surface of ‘NVA-31’.

In addition to a free-flight mode, there’s the opportunity to tackle a selection of short-distance scripted sorties most of which involve either delivering supplies and spare parts to industrial facilities, or scouring barren blue-tinged wastes for lost vehicles. 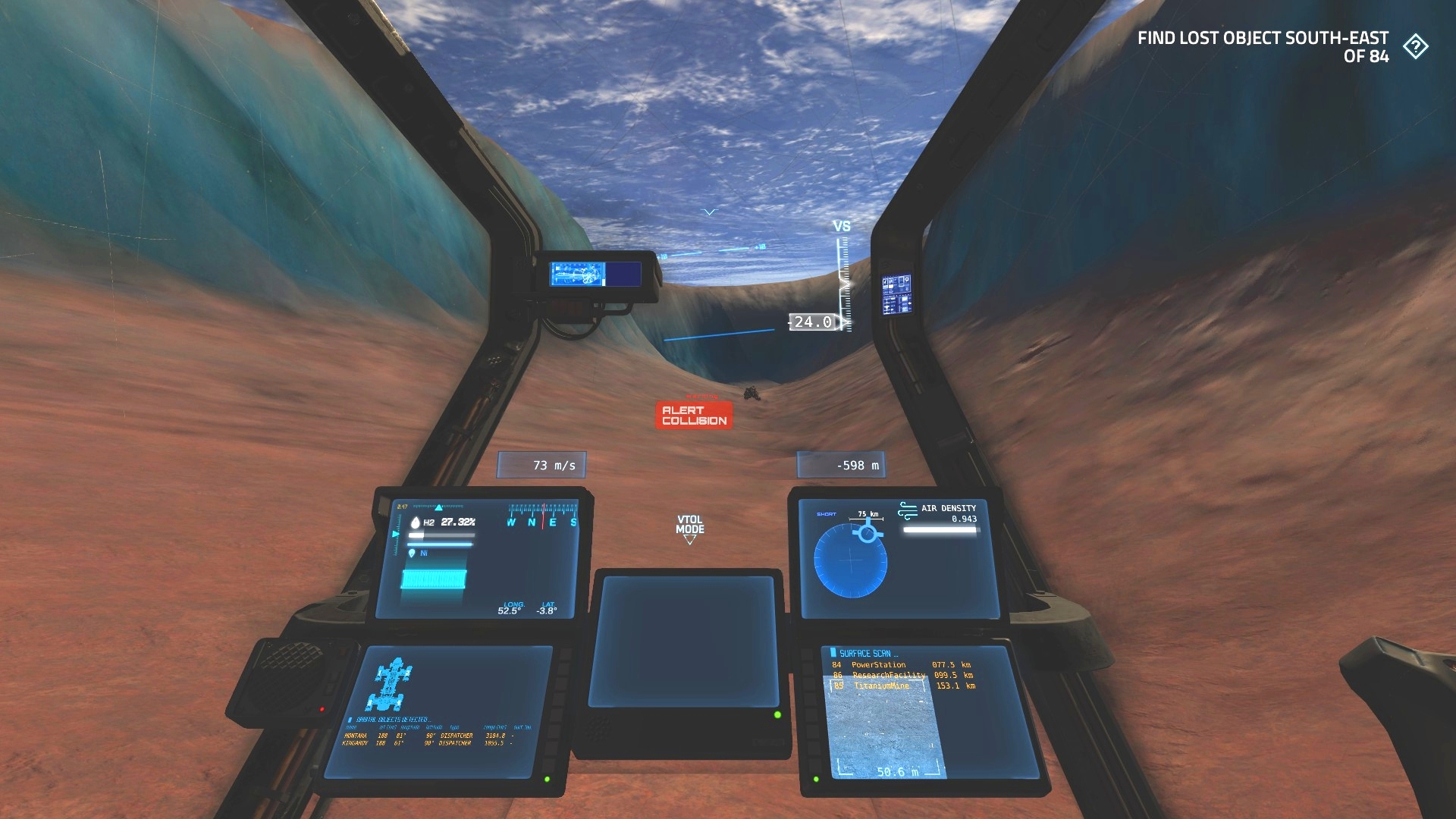 The lively FMs conspire with lumpy topography, thirsty engines, relatively small fuel tanks, and a non-existent auto-hover button to ensure few of these runs are perspiration free. True, anytime you purchase the spacefarm or run out of juice, you can restart the job without penalties of any kind, but no self-respecting simmer will be able to reset without a twinge of self-reproach. 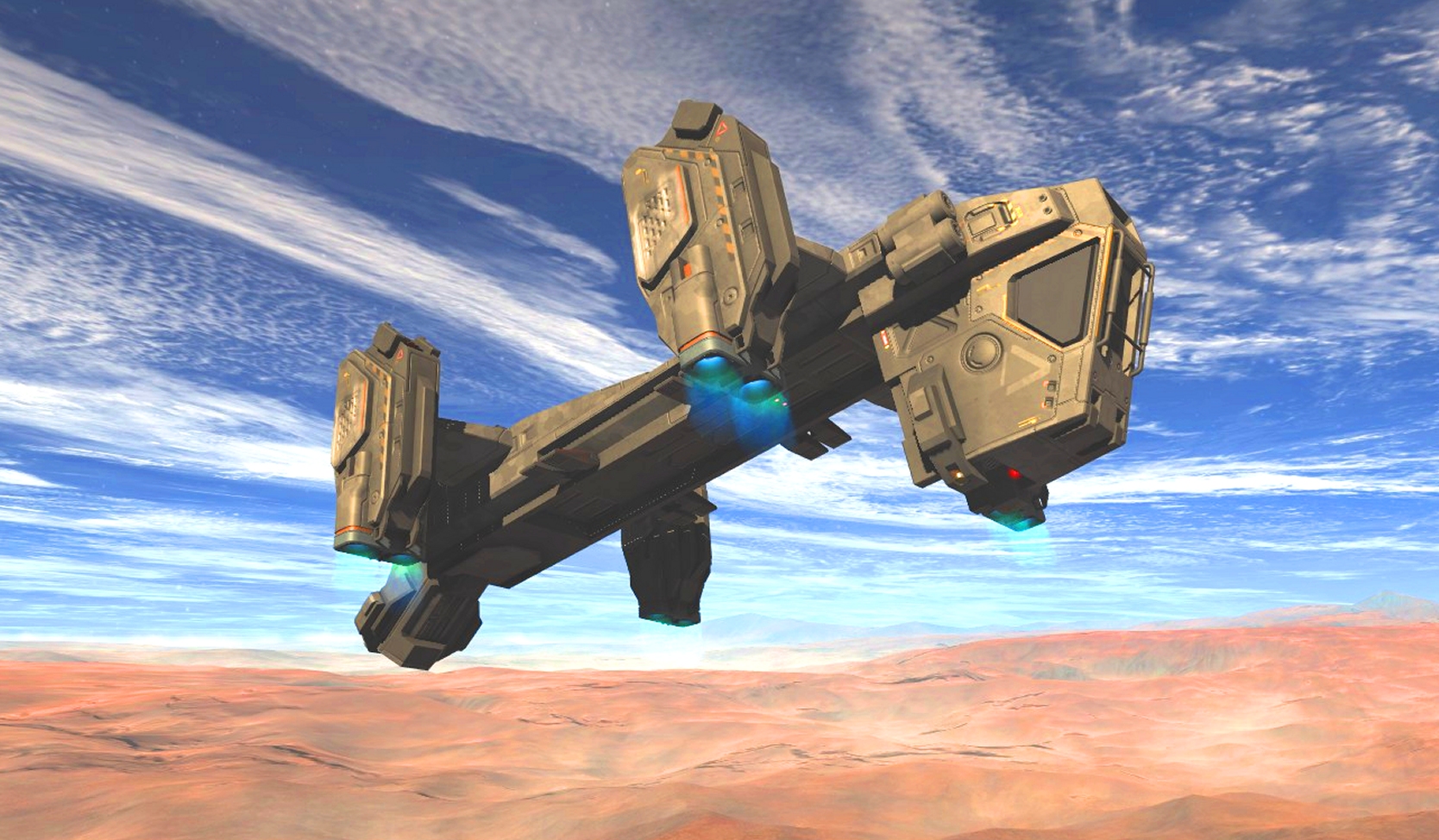 Heavy landings and clumsy manoeuvring often reshapes fuselages and flight surfaces or causes displays in the virtual cockpits to fail. What damage – or weighty cargo, for that matter – doesn’t seem to do is have a noticeable impact on flight behaviours, which is a bit of a shame. I’m sure operating the machine above, sans one or two of its engines, would have been interesting.

Perfectly playable with keyboard and mouse (a controller or joystick is recommended), Flight of Nova looks to have an interesting future ahead of it. The following roadmap…

… doesn’t need “Randomly generated sorties”, “Economic layer”, “Improved damage modelling”, and “Wheeled vehicles” to be tantalising, but I know at least one FoN flier who would have appreciated their presence.