I was hoping to persuade Keith Douglas, the writer of some my favourite WW2 poems, to review Early Access The Troop for me (Douglas, a Sherman commander, was killed by a mortar blast near Tilly-sur-Seulles on D-Day+3) but as THC’s ouija board is on the blink and keeps connecting me to Keith Harris instead, I guess I’ll have to tackle the job myself. 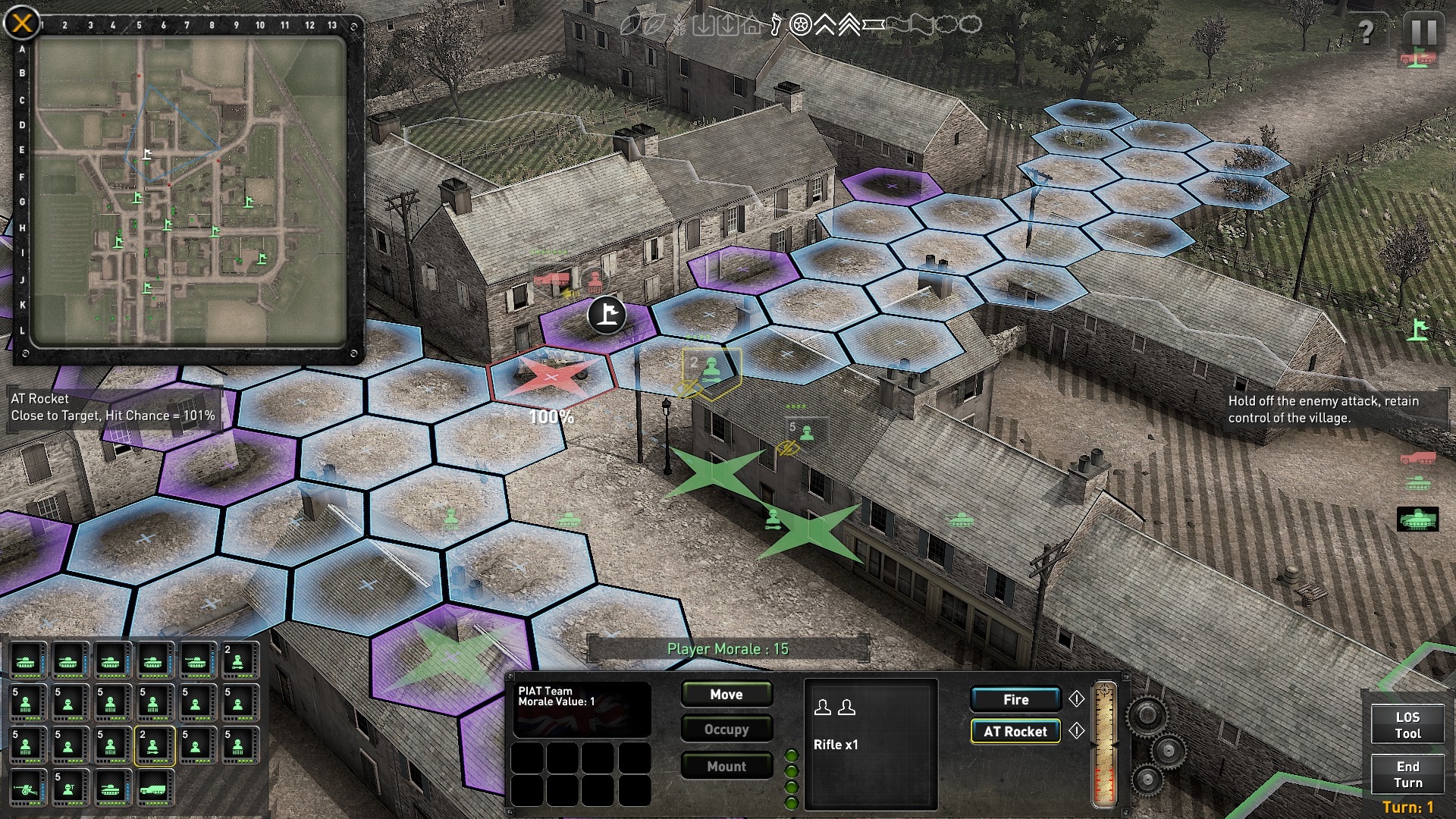 Because The Troop is a moving target (the most recent update arrived on Wednesday) this assessment probably won’t be all that useful a year from now. The reason you’re getting such a premature/perishable review is that very few battle sims this incomplete and flawed are also this easy to champion. 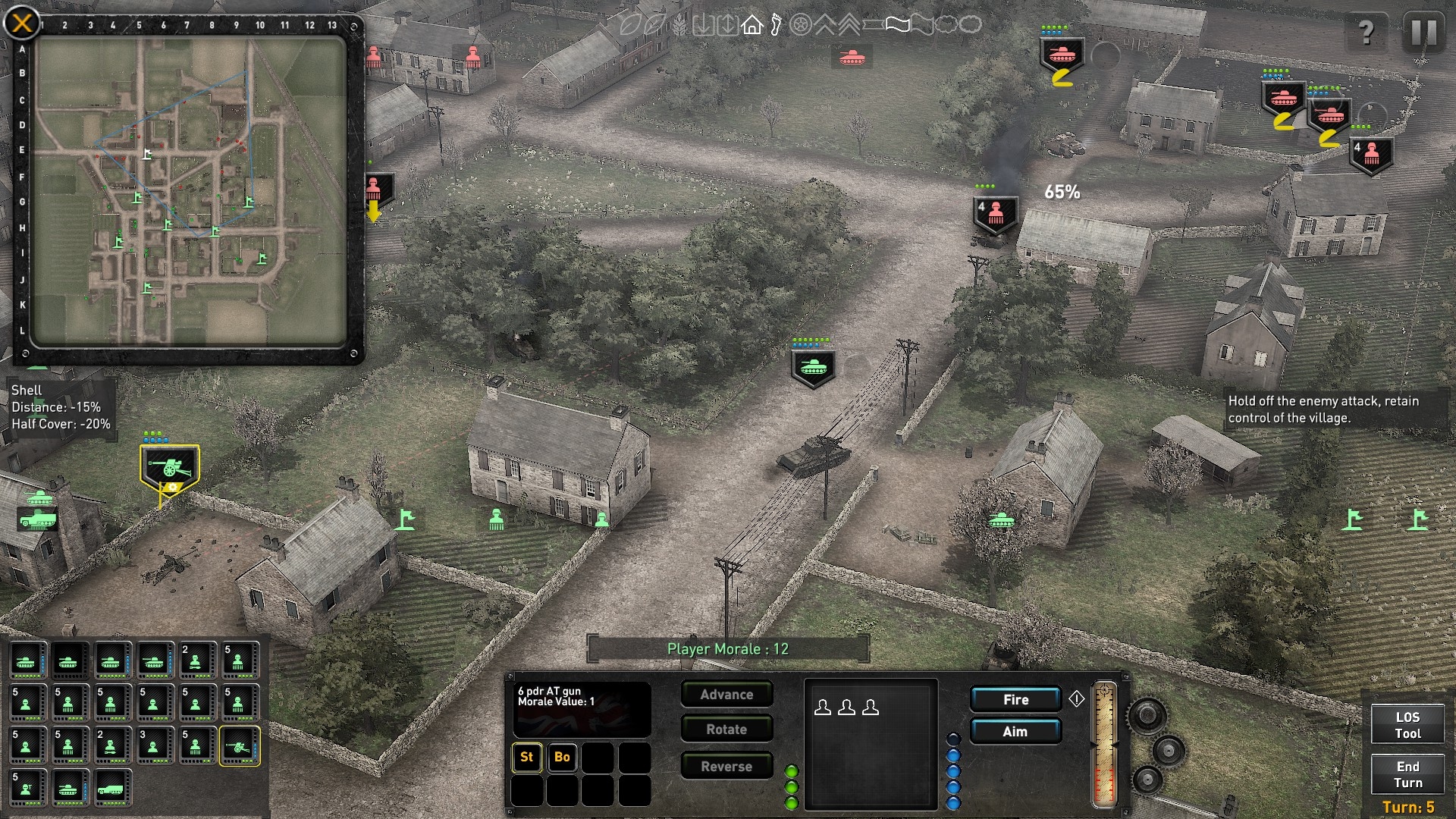 As I’ll explain in more detail shortly, Giant Flame’s work-in-progress £31 TBT comes with a bizarre lack of opportunity fire, an imperfect camera, dubious repair rules, and no commander/HQ or melee mechanisms. Devoid of contours, minefields, bridges and streams, and frequently shrouded in gloom, its hex-draped Norman arenas aren’t exactly varied. There’s no campaign or skirmish generator yet, and manual saving is impossible. On the face of it, what we have here is a diversion that cash-strapped tacticians should be able to dismiss without a second thought. 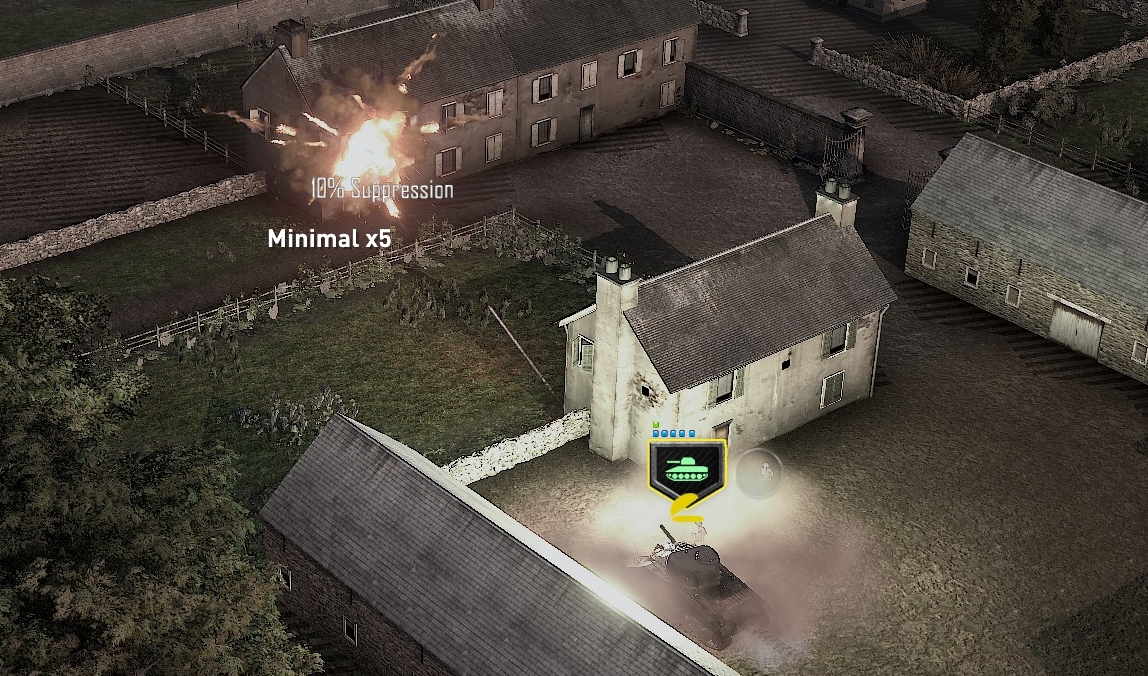 The snag is The Troop’s talent for making you feel like you’re playing a honeycombed, turn-sliced Close Combat or a 3D Steel Panthers – the way, at times, action brings to mind dimly remembered passages in period memoirs such as By Tank Into Normandy, Mailed Fist, and Tank!. Fairly regularly, the complicated, cover-rich battlefields, the essentially realistic weapon modelling, the (usually) sly AI, and the soupy Fog of War conspire to produce tactical situations that stimulate and stump, and moments that bate breath, quicken the pulse, and ring true. 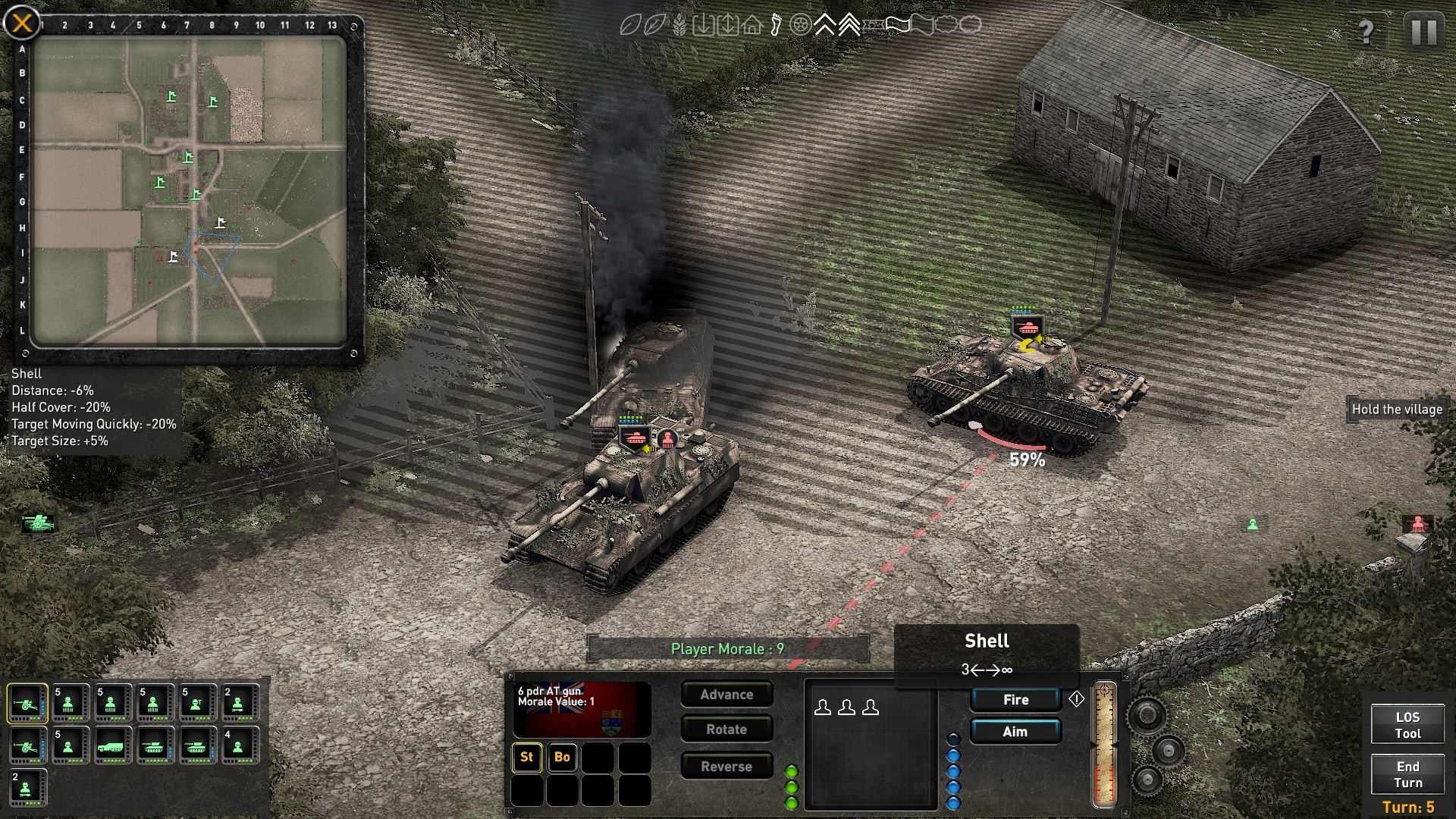 Yes, the this-is-why-I-wargame and the this-is-it-how-it-was moments have less agreeable counterparts – occasions when an improbable miss or a strange bit of unit behaviour rends the illusion, but these are few in comparison.

What a pity the devs don’t allow us to reproduce similar perspectives and magnifications during normal play. Not only can you not tilt the view or drop to ground level manually, you can’t lift the camera high enough to take in complete LoS/LoF lines on large maps – a significant handicap particularly when combined with icons that don’t differentiate between in-LoS and out-of-LoS threats. 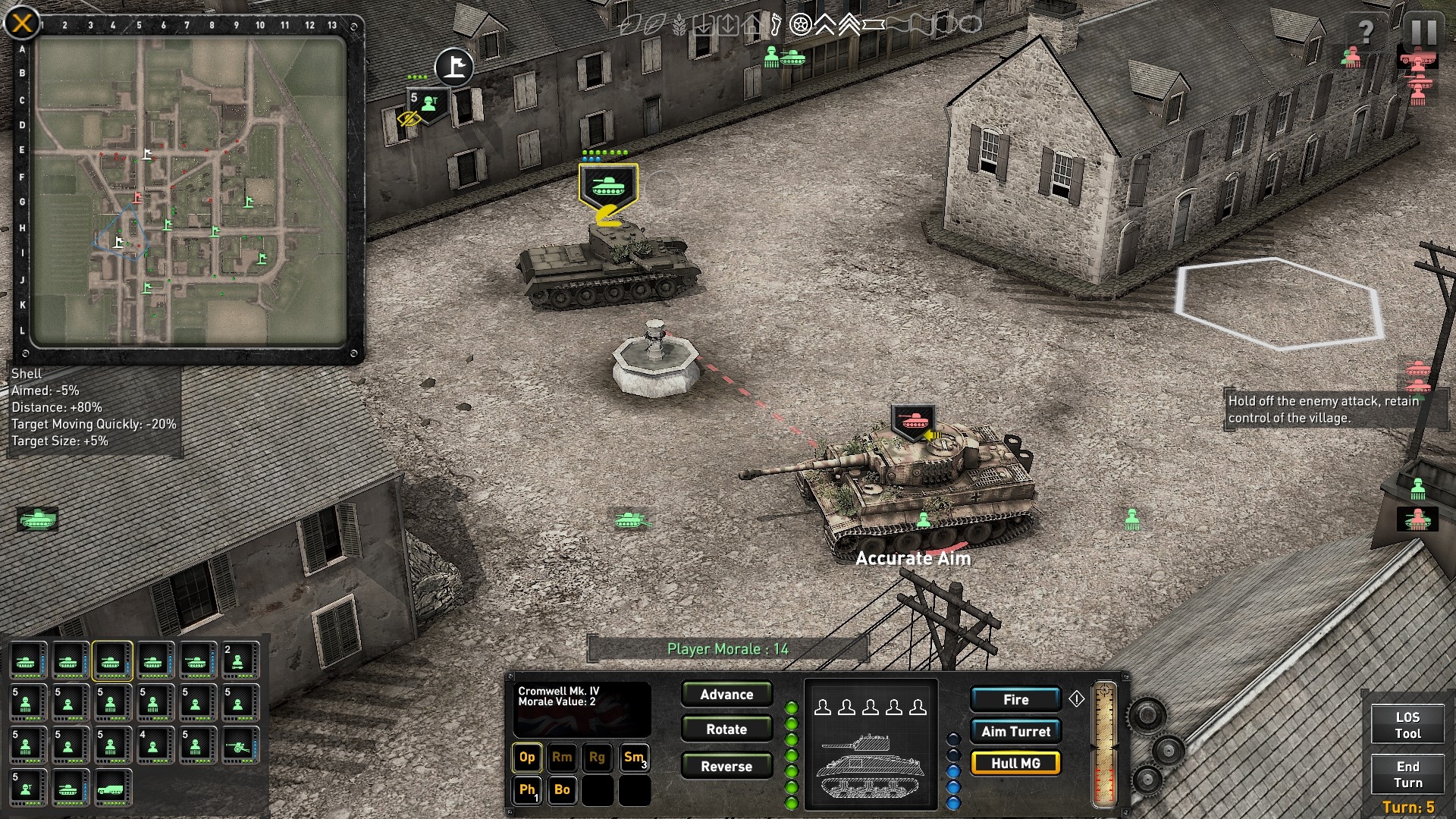 A week ago I’d have described The Troop’s lack of an opportunity fire mechanic as borderline daft. Now, although I still find the absence of overwatch disconcerting and would nod vigorously if you claimed it reduced realism, I’m actually beginning to enjoy the accidental (?) consequences of totally unadulterated IGO-UGO play. The fact that an enemy AFV can venture onto a road perfectly aligned with the muzzle of one of my patient, waiting-for-trade AT guns, scamper along half a dozen of its hexes, then dart into cover without risk of damage, would be exasperating if my units couldn’t do exactly the same thing when my turn came around. Leaving out opp fire a) allows a form of leapfrogging that doesn’t feel completely out of place on a WW2 battlefield, and b) allows a form of leapfrogging that the game’s smart silicon adversaries use with panache. If you don’t grow to like the approach, there’s a good chance you will at least come to accept it.

The same applies to another realism weakener – the soft-hearted repair rules. Tank damage comes in various forms: one-shot kills (probably not as common as they should be), immobilisations, knackered weapons, slain crew members, degraded MPs (movement points) and GPs (gun points – used to rotate turrets, aim, and fire). Often there’s a chance to restore a wounded trundler to full mechanical health by spending a couple of turns ‘repairing’ (The AFV is helpless during the process so obviously it pays to pop smoke or seek cover first). The more Close Combat and Combat Mission veterans that discover The Troop, the more forum posts there are likely to be calling for this somewhat gamey mechanic to become a toggleable option. 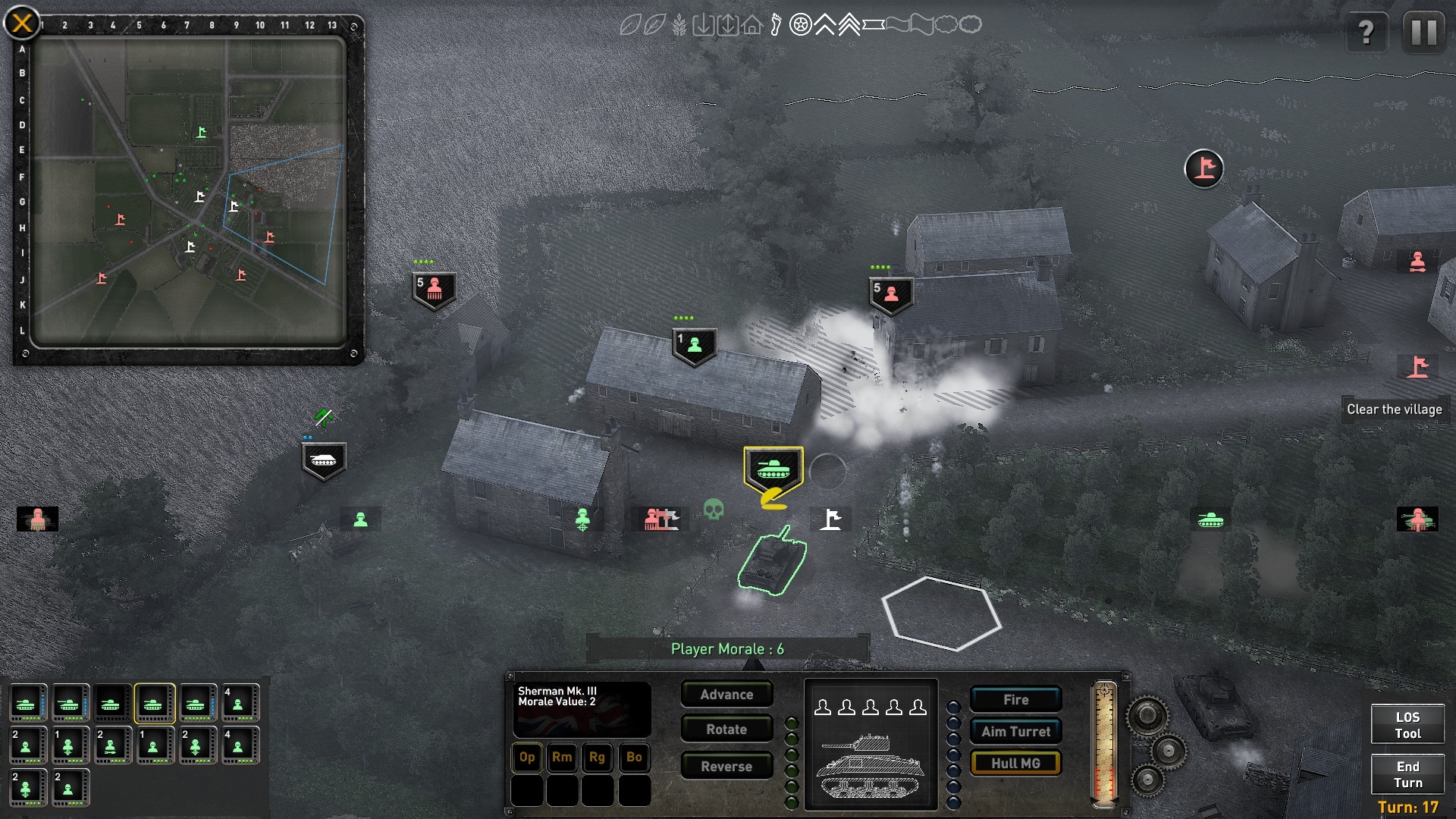 Apart from their faintly miraculous restorative powers and their refusal to fire through smoky hexes (an idiosyncrasy common to all units) I really like Giant Flame’s AFVs. MGs, unbuttoning, smoke grenades, smoke shells, passengers, dismounting… it’s all modelled. The separation of MPs and GPs is a particularly inspired touch leading to interesting situations in which tanks have LoS to a target but don’t always have sufficient time to bring their main guns to bear. Sometimes you find yourself taking a punt with turret direction – “I reckon that Panzer IV that just disappeared behind the farm is going to reappear around here next turn. I’ll plant an aim marker in the hex and cross my fingers.” When gambles like this pay-off, it’s immensely satisfying. 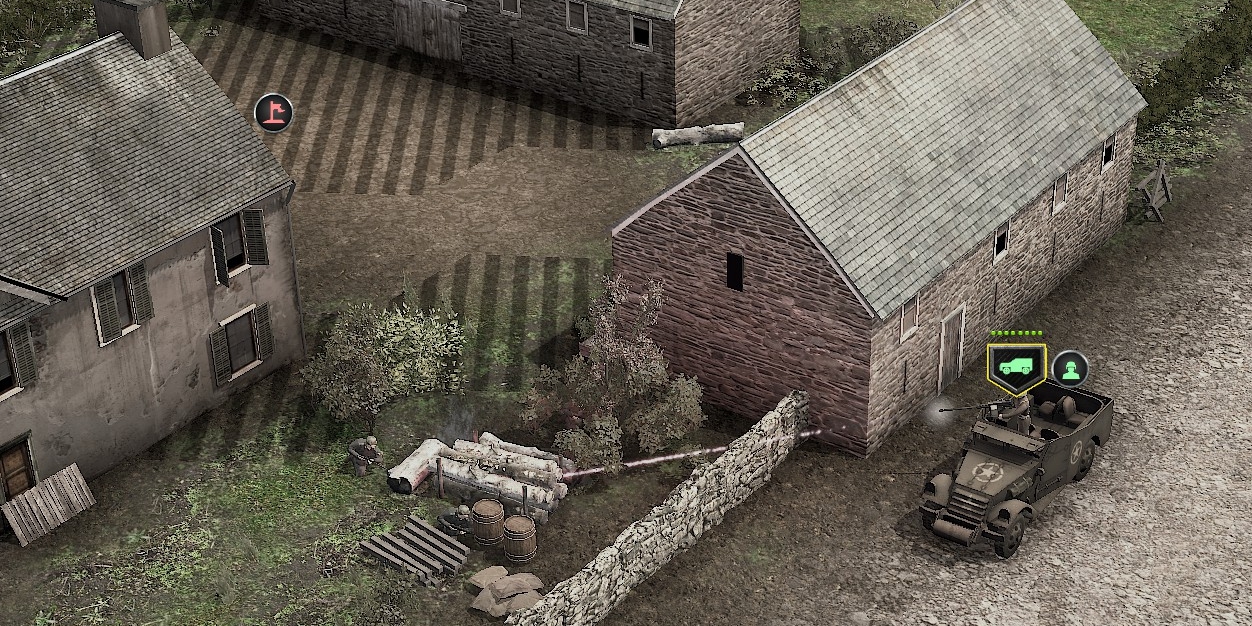 Grunts can feel decidedly fragile at times, but learn to use cover well and advance in short hops (moves of just one or two hexes, even in fairly open terrain, help keep Poor Bloody Infantry unbloodied) and friendly bodycounts shouldn’t be too eye-watering. Does the game need melees/overruns? Yes. Should the five-man British and Canadian groups that dominate Allied OoBs have more two-inch mortars at their disposal? Possibly. Would the introduction of ammo counts, and an intermediate ‘wounded’ state be worth considering? Maybe. I see I’m not alone in desiring HQ/leader units. Happily, the devs are experimenting with different approaches in this area. 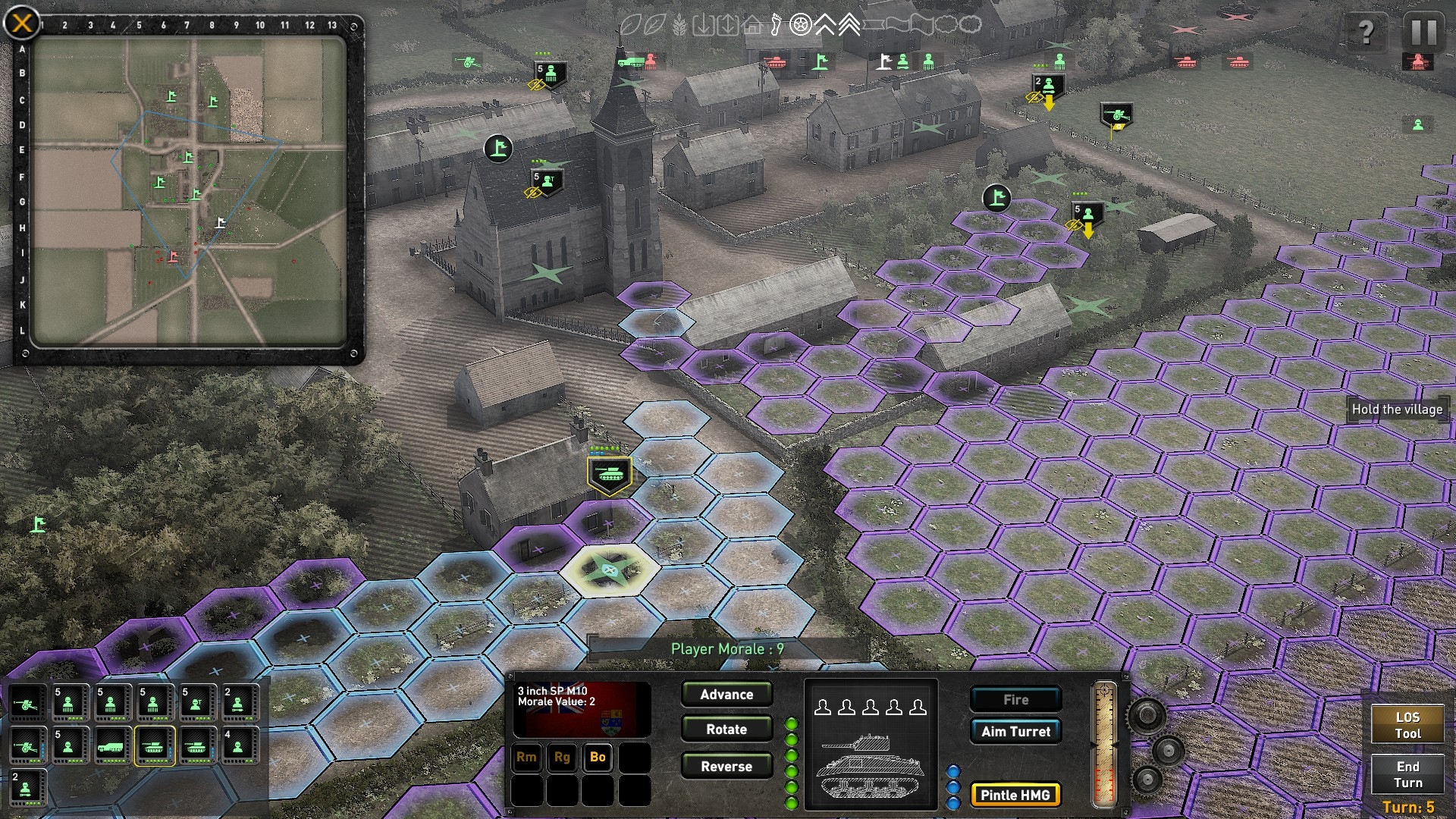 Compared to some of its peers, The Troop’s multi-storey buildings fudge is relatively low fat. Although you don’t get to choose floors when you send infantry into a lofty structure, your men will enjoy LoS benefits once they arrive. 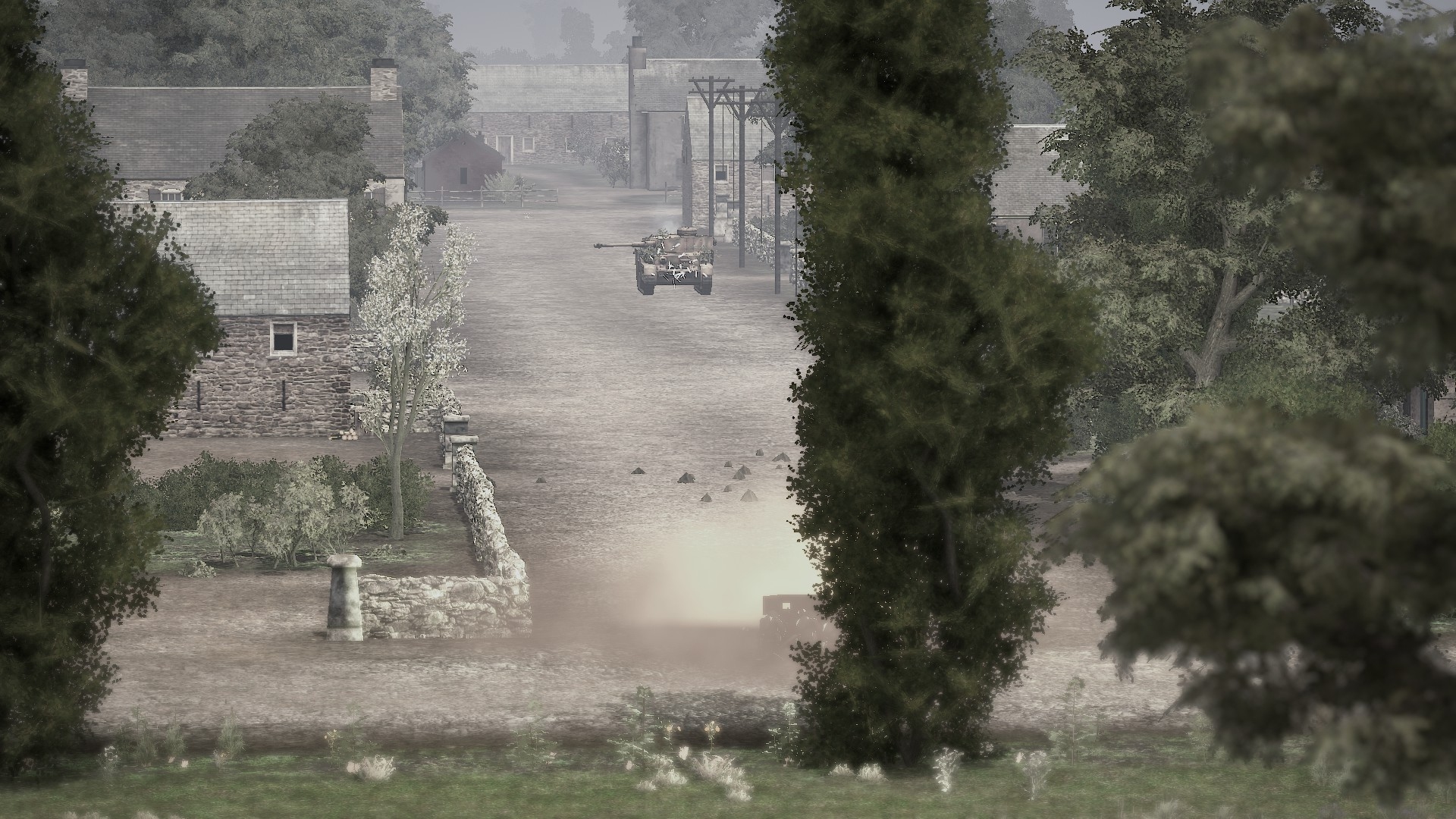 Calling your WW2 tactics game ‘The Troop’ and then failing to provide a troop-centred campaign with carry-over of core units, arguably should be illegal. The fact that I’m willing to forgive Giant Flame for planning “a linear semi-historical campaign that hops between units from engagement to engagement” instead, reflects how much I’ve enjoyed playing the thirteen standalone scenarios – most of which can be tackled as either the Allies or the Axis – available in the current build. 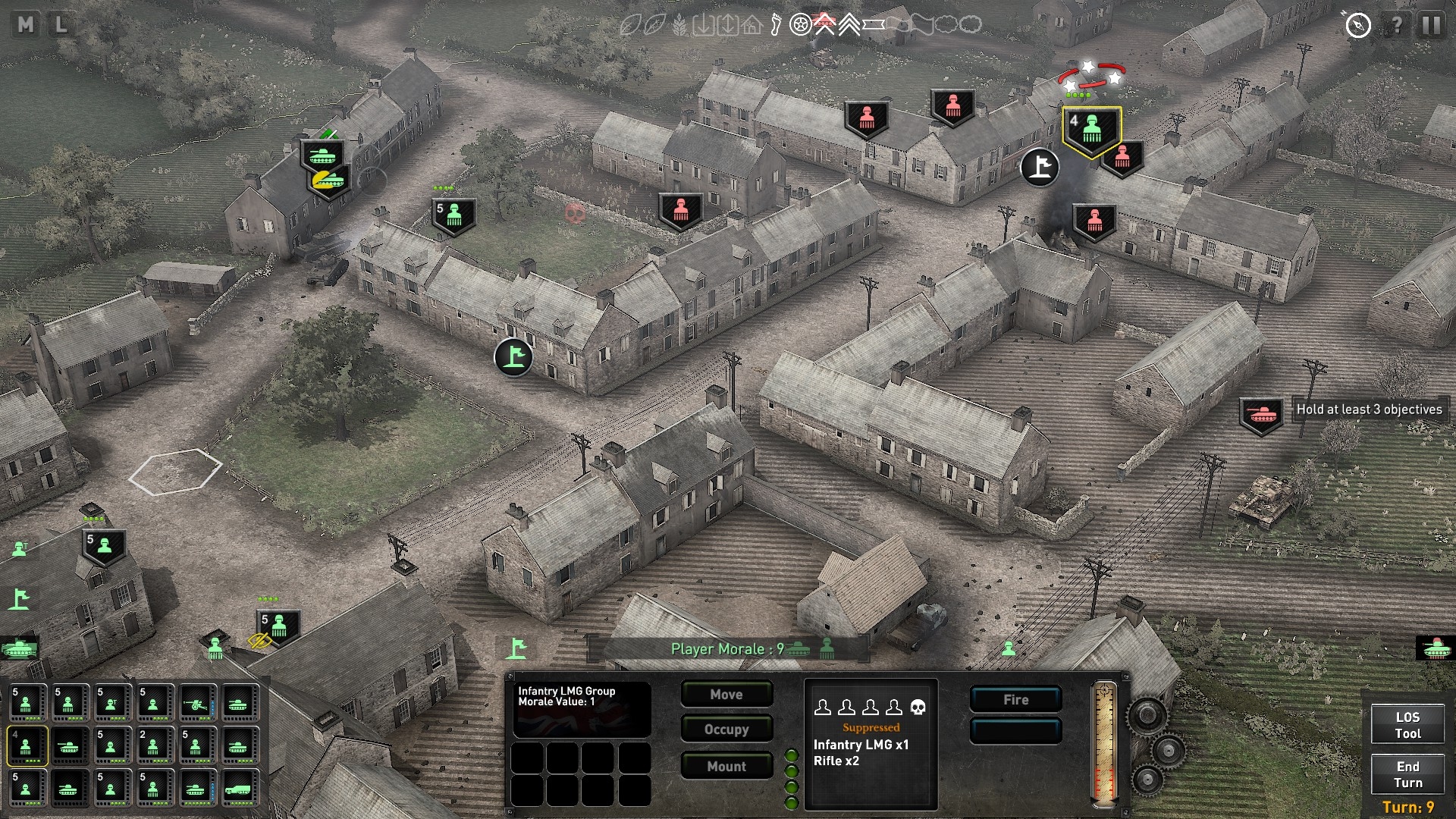 The AI’s innate unpredictability and happy habit of varying its deployment patterns means this baker’s dozen isn’t short of replay potential. A few of the missions would benefit from victory condition and deployment zone tweaks, and some extra difficulty customisation levers (The only way to stiffen challenges presently is to slightly modify your side’s defeat-triggering morale threshold). If the devs ever introduce Close Combat-style pre-clash unit purchasing, replayability will be further enhanced. 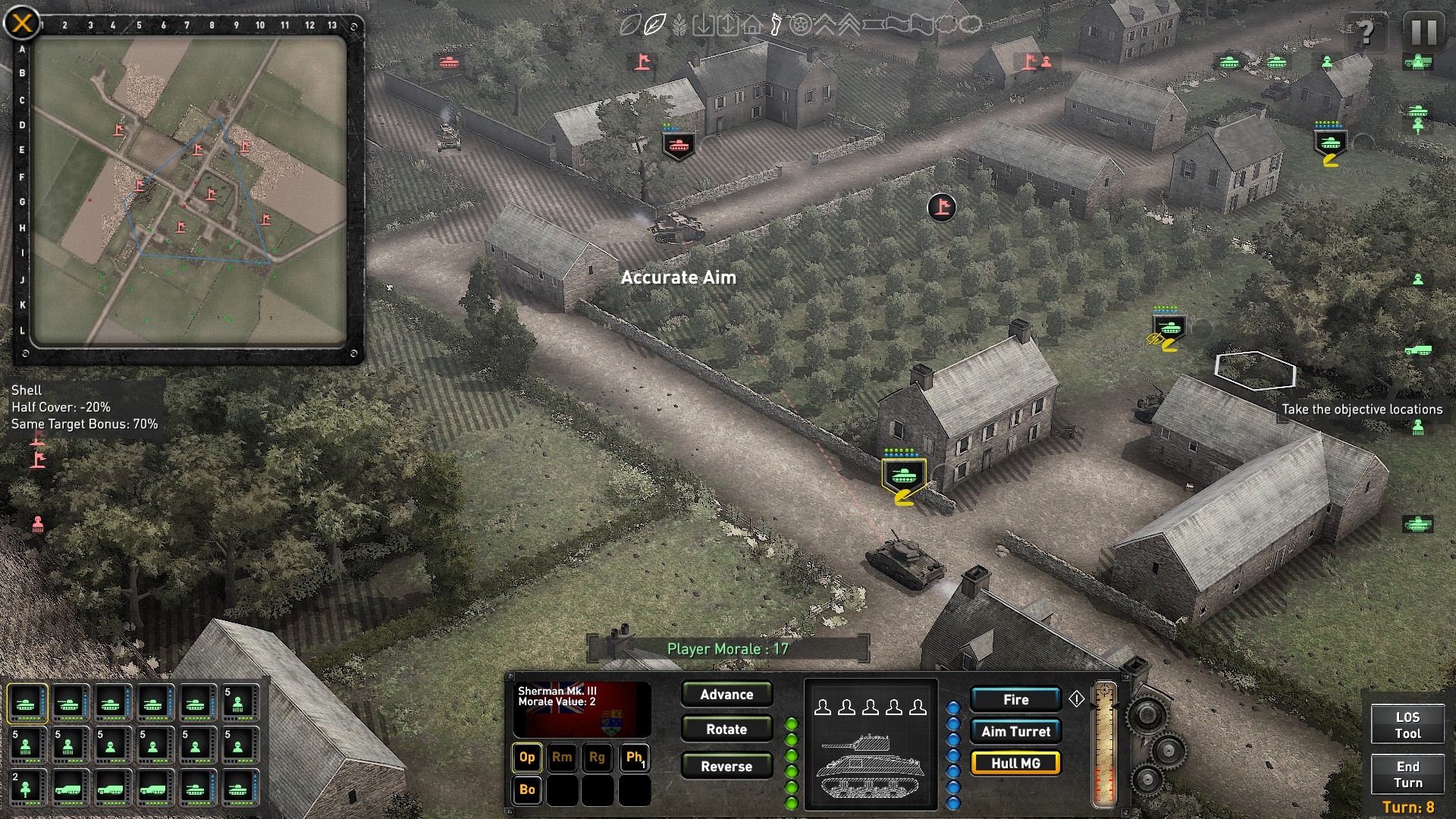 It would be remiss of me to conclude key bashing without pointing out that this demo-equipped delight is that rarest of things – a battle sim that manages to combine authenticity with approachability. It doesn’t matter much whether this is your first wargame or your fifty-first, you’re probably going to get into the swing of things swiftly and wind up enjoying yourself. The controls and interface aren’t perfect – (double-clicking a unit really should put that unit in movement mode… the mini-map could be more helpful… the over-bright movement overlay should colour house hexes…) but, unlike the MG, rifle, and Panzefaust-armed blighters waiting patiently for your liberators in hedges and hovels, they’re not actively hostile. 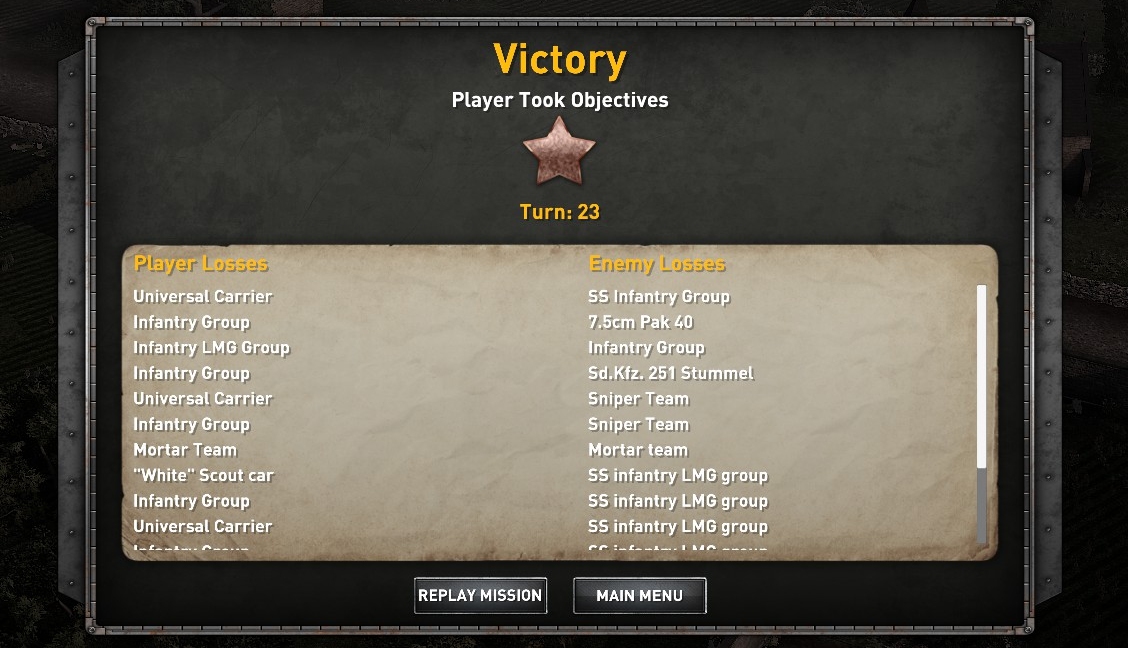 ‘How to Kill’ by Keith Douglas

Under the parabola of a ball,
a child turning into a man,
I looked into the air too long.
The ball fell in my hand, it sang
in the closed fist: Open Open
Behold a gift designed to kill.

Now in my dial of glass appears
the soldier who is going to die.
He smiles and moves about in ways
his mother knows, habits of his.
The wires touch his face: I cry
NOW. Death, like a familiar, hears,

and look, has made a man of dust
of a man of flesh. This sorcery
I do. Being damned, I am amused
to see the centre of love diffused
and the waves of love travel into vacancy.
How easy it is to make a ghost.

The weightless mosquito touches
her tiny shadow on the stone,
and with how like, how infinite
a lightness, man and shadow meet.
They fuse. A shadow is a man
when the mosquito death approaches.