It was naughty of me not to mention The Belin Rule back in turn 10 when the Major arrived. Because Battlefront doesn’t allow scenario designers to give units traits like “glory hunter” and “complete wazzock” I’ve had to invent my own house rule for Belin. Every turn since #10 I’ve been quietly rolling a six-sided dice. This turn, for the first time, I rolled a 1 meaning the Comment Commanders’ highest ranking unit ignores assigned orders and does what he damn well pleases. “What he damn well pleases” invariably means bee-lining for the enemy with a Luger in his hand and a Knight’s Cross in his mind’s eye.

For Major Bellend his first single pip couldn’t have come at a better time. Sitting in the right-hand seat of a SPW 251/1 (Ausf. D), he tells one of subordinates to man the MG 42 and orders the halftrack’s driver to proceed at top speed to the Koffiehuis de Onionmancer, the cafe near the bridge where Brinkmann is trapped. The vainglorious chump intends to gain gongs and hit headlines by ‘singlehandedly’ rescuing the Reich’s most famous air ace.

Will the hurtling Hanomag get a 6 lb sock to the jaw when it turns the corner onto column red i? At T+0 this seems unlikely, but as the turn unfolds the risk increases. First the howitzer’s bid to eliminate the AT gun miscarries. Given the freedom to plot my own destination point for the SPH’s advance I choose one that seems to tick all tactical boxes. Our ambling artillery piece gets into position quickly then spends the rest of the sixty wiggling its gun barrel like an indecisive anteater. The 3D visuals suggest LoS/LoF shouldn’t be an issue, but the relevant code has other ideas. 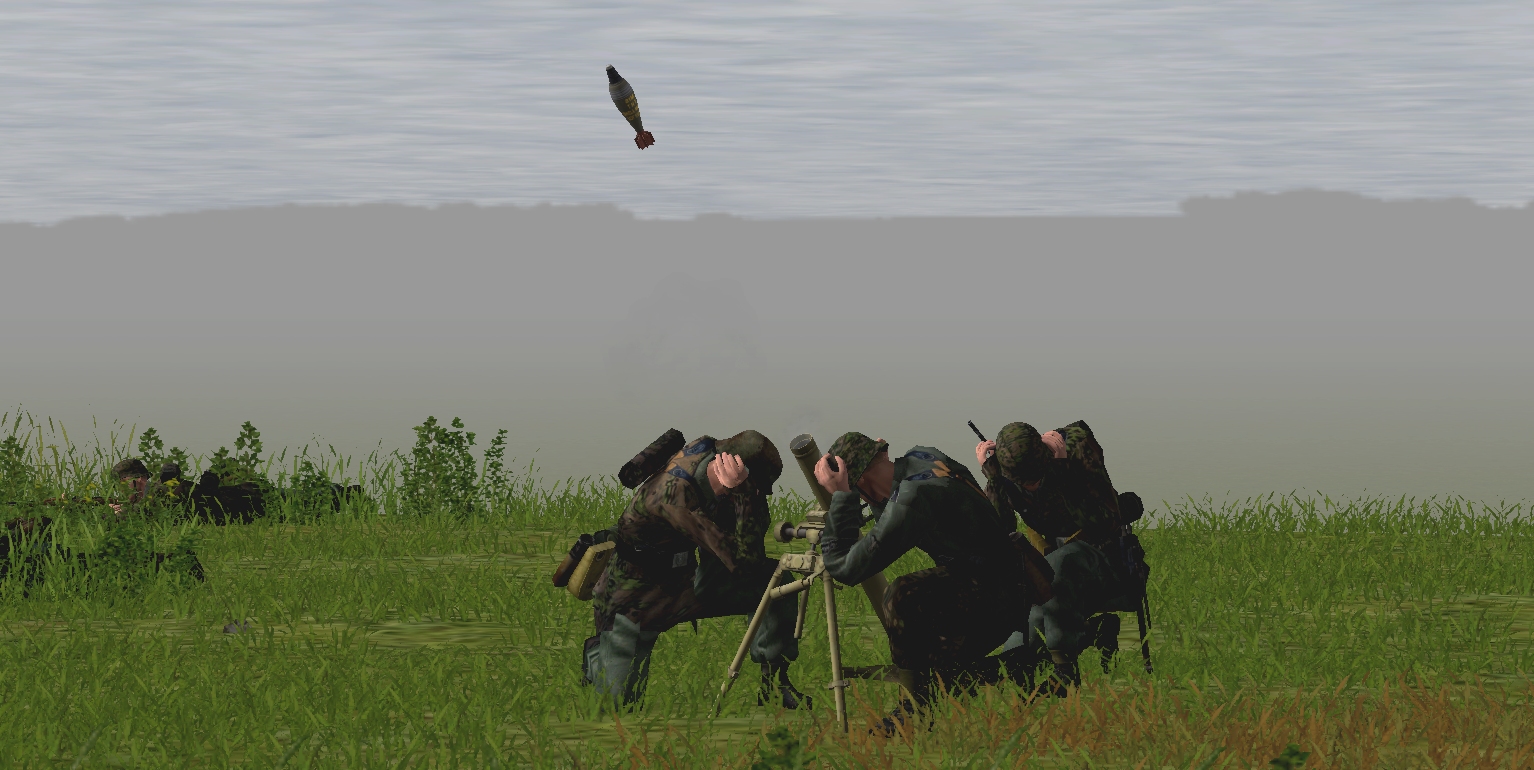 Oh well, there’s still a chance our medium mortar will KO the mauled 6-pounder before Belin’s chariot rounds the corner.

Nope. When, at T+15, the Granatwerfer 34 runs out of HE ammo, the British AT gun is still operational. The turn ends on something of a knife edge. The AFV carrying our gung-ho Major is executing its turn onto the red i road, and the 6-pounder, pinned for most of the sixty, seems to be actively searching for targets again.

Turn 17’s other west side story involves a party of paratroopers shifting eastward. Spotted by 6 Squad first, the restless red berets start near the monastery’s western wall and end up in the woods opposite the main gate.

They are engaged by several German units during their journey. Only the rounds delivered by the SPW U304 produce red crosses (two).

Until the unexpected explosion at T+42 it looks like the easterners are going to enjoy another casualty-free turn.

Covered by comrades on the railway embankment and in the garage, Meister’s team make it to the the canal bank without incident and is soon slinging lead at threats in the vicinity of the monastery.

Bolstered by Griess + 2, Woikin’s team make figurative and literal mince meat of the enemies opposite.

Unless new tenants move in, there’ll be no more trouble from the foxholes under the poplars.

After (re)joining forces behind the bocage ‘T’, the three surviving members of 3 Squad add to British woes by permanently silencing the Bren gunner near the pill box.

The one setback occurs 18 seconds before the clock stops. Out of nowhere, a 3-inch mortar bomb Stukas onto the railway line between Bulau’s team and the nearby NE mortar.

The ballast-broadcasting blast deprives the Comment Commanders of one of their Panzerfaust porters. 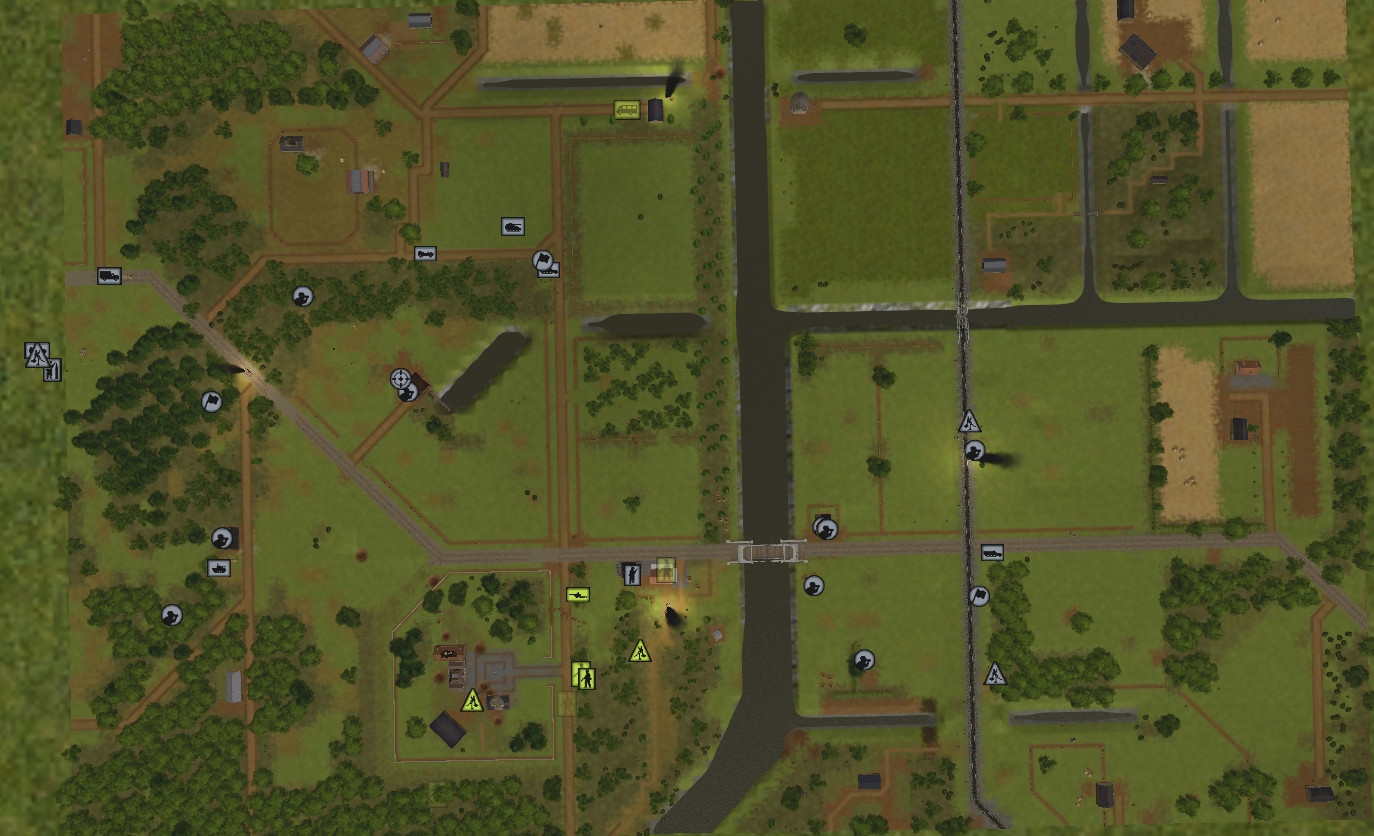